My fourth day in the beautiful Indian state of Kerala got off to an amazing start as my boy Ebbin and I hit the road and drove from Alappuzha to our next destination: Thekkady! Come along with us as I give my first impressions of Thekkady, the tiger capital of God’s Own Country, Kerala, India!

My day began in the city of Alappuzha, where Ebbin and I had spent the past 24 hours on a houseboat in the world-famous Kerala Backwaters. We checked out of our amazing houseboat and set off on a 4.5-hour road trip east to the Woodnote Resort in Thekkady. Thekkady is a gorgeous, green hill station that’s about 132 kilometers away from Alappuzha. It’s known as the best spot in Kerala to see wildlife, including tigers, elephants, birds, and much more! There was so much I wanted to do there. And I couldn’t wait to share my first impressions of Thekkady, Kerala, India. But first, we had to get there! We’d be making some stops along the way, and I was super excited about those as well. 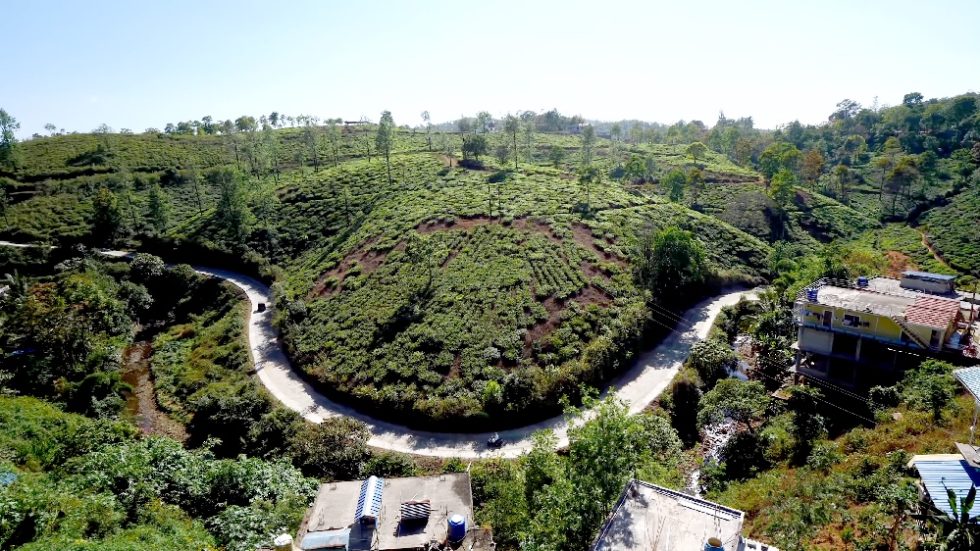 Alappuzha is such a picturesque district in Kerala. It’s home to incredible backwaters, rice paddy fields, and coconut groves. There’s lots of mouthwatering seafood there, and you can also try the local coconut wine, toddy! It’s made from the fermented nectar of a coconut flower but doesn’t have a lot of alcohol in it. We stopped to get some on the way to Thekkady!

The best places in Kerala to rent a houseboat are Alappuzha and Kumarakom. In Alappuzha, there are at least 800 registered houseboats. They come in different sizes and qualities. Ours had three bedrooms and was more of a luxury houseboat. The cost covered the food, activities, staff, and lodging for six people! It’s a must! 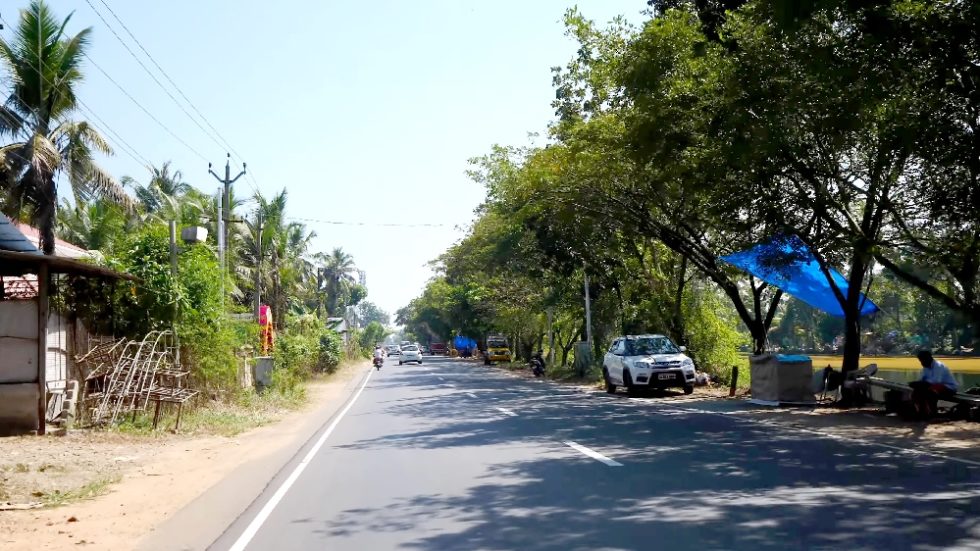 We passed through Ebbin’s hometown, which was super crowded. It’s jam-packed with traffic and people even though it was a small town. As we continued on, we finally started going uphill after passing through more towns. There was more jungle. We passed by some rubber plantations as well as trees and huge house-like building. It felt very wild. We were now in the Kottayam District of Kerala. The landscape and climate had changed! We were about 30 kilometers from the Idukki District. 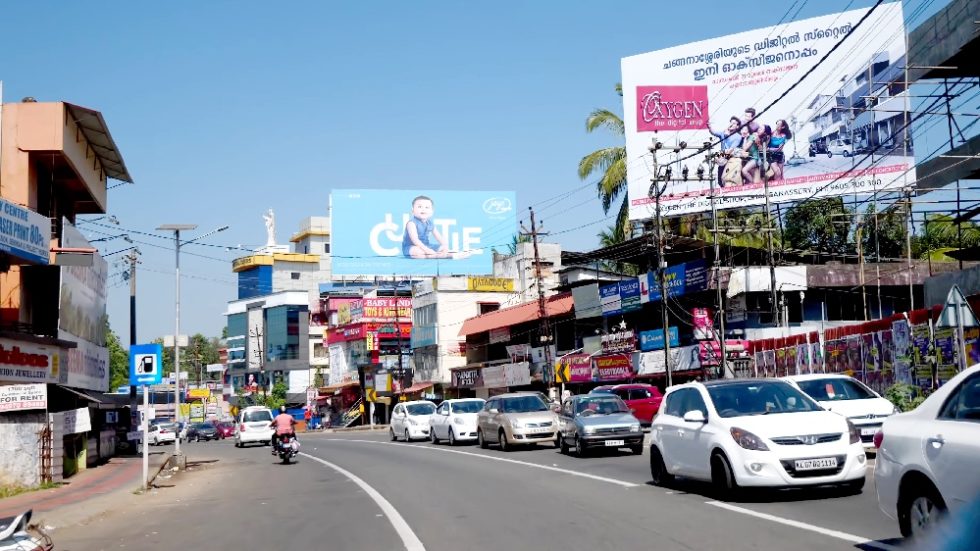 Because it was January, a lot of the trees were dead-looking. I learned that the best time to come is in September and October, right after monsoon season, when everything is green and you can see waterfalls. We stopped on the side of a rubber plantation so I could see the rubber trees and jars they attach to them to collect the sap. Then, we continued on through another small town. All of the towns were similar and had center junctions. You can pass through them in about a minute! 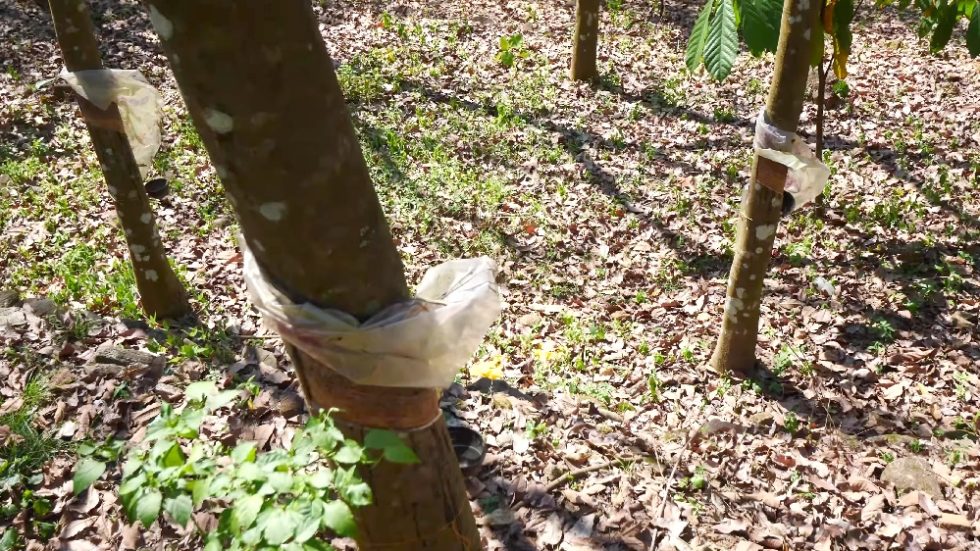 We passed the third town and continued climbing uphill. It reminded me of the climb from Guwahati to Shillong in the state of Meghalaya. We stopped by the side of the road to get an amazing view of pineapple fields, trees, and huge mountains in the distance. Nearby was a woman selling pineapples!

We continued on. We had about 2 more hours to go on a winding road on the side of a mountain. This area is so rugged. We passed by lots of buses and pilgrims, so the road was pretty congested. But it’s what you have to deal with when you come to India!

We passed through Peermade, the town where Ebbin lived for three years while he was an undergrad. With about 70 minutes to go, we stopped again to view a tea plantation. It was gorgeous! There were teas growing in the tea plantation to give the tea plants some shade. We stopped at My Guest Restaurant to get some black tea with ginger. It was so good and had lots of ginger. The tea had no milk in it and was super hot! It was refreshing, though! It was an excellent cup of tea, although I’m more of a coffee guy. 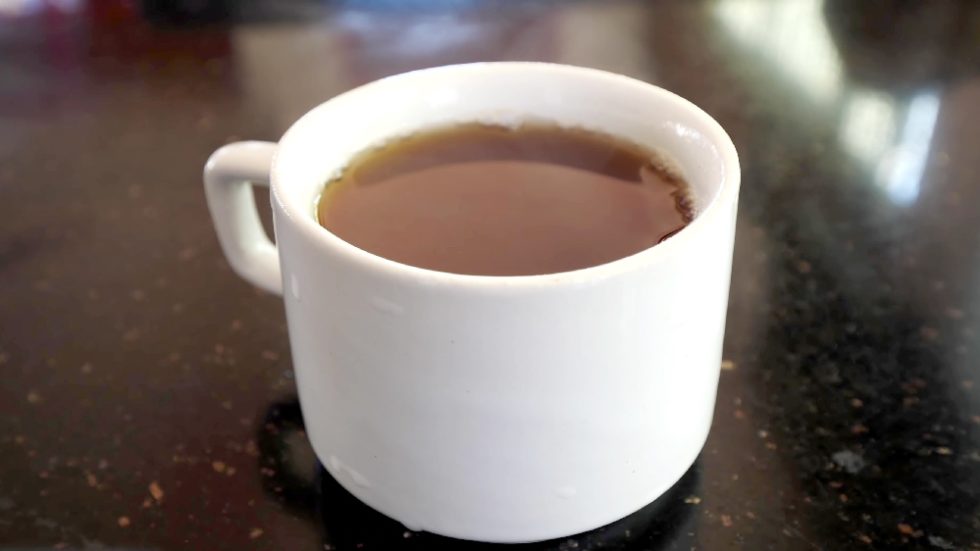 My Guest Restaurant also sold homemade chocolate for 50 rupees/$0.67 USD. We bought some and then went to get me a turban. We headed up a narrow stairway and headed to a small shop, where I got a nice, blue garment that you wear around your waist for about $2.50 USD. I also got a headpiece, which they cut from a larger piece of cloth. The shop owner wrapped it around my head. He gave it to me for free! The people in Kerala are so nice! 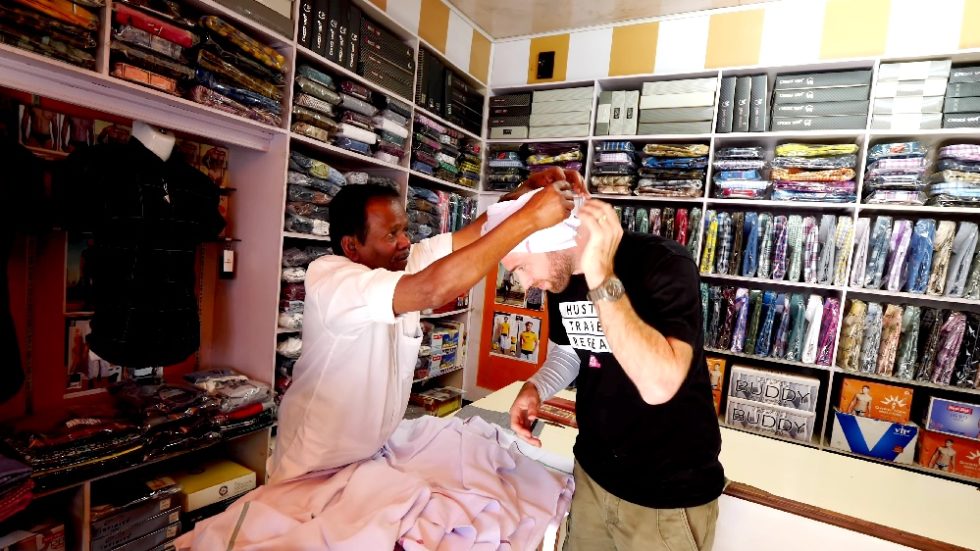 We headed back down to the car to continue our way to Thekkady. There were tons of tea plantations all around us after we passed through the final town on the way, Vandiperiyar. It’s one of the busiest towns in the area because the tea plantation workers go there.

For 45 minutes, it was a never-ending sea of tea plantations! This is one of the best places in the world for tea, along with Hangzhou in China, Sri Lanka, and the Indian state of Assam. Black tea is processed, but tastes better, while the green tea is unprocessed and is healthier for you. 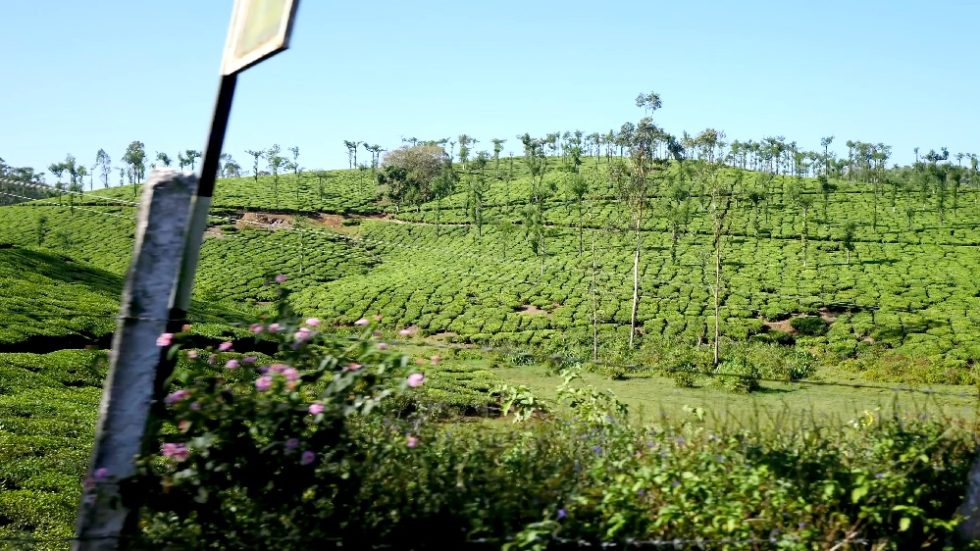 We passed by some coffee plants and Ebbin told me we’d soon come across some spice plantations. And just like that, we had made it to our destination, and I was able to get my first impressions of Thekkady, Kerala, India. Thekkady is the area, but Kumily is the down. It’s famous for the Periyar Tiger Reserve, but spotting tigers is very difficult. 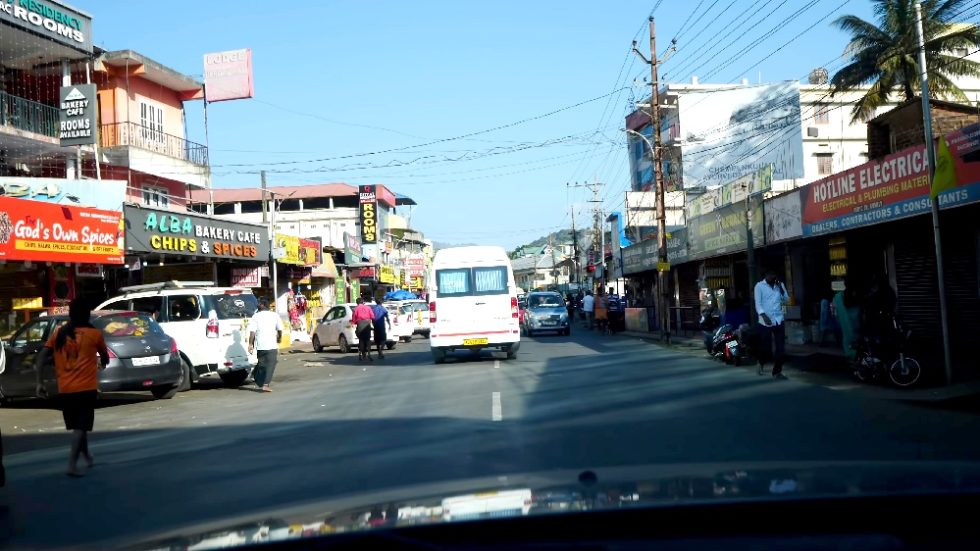 The town of Kumily was beautiful. I saw tons of banana chip vendors. They’re popular among tourists. They had huge glass containers full of banana chips! 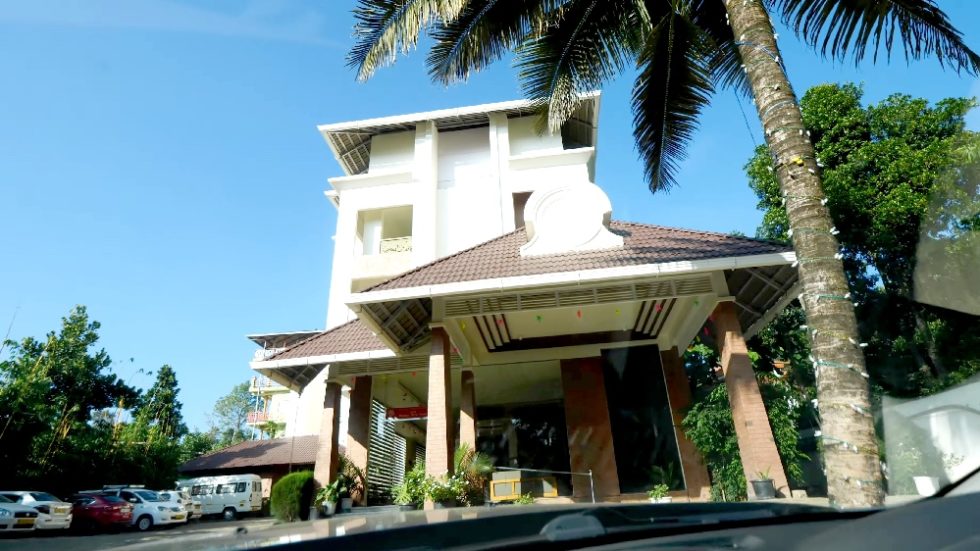 We arrived at the Woodnote Resort, where they greeted me with a handshake, flowers, and a woman put some tikka on my forehead! Inside the lobby, I tried a cup of delicious spiced tea, which was nice and sweet. My room was on the first floor. They have 29 rooms in total. The resort is in the center of town, so it’s close to everything. 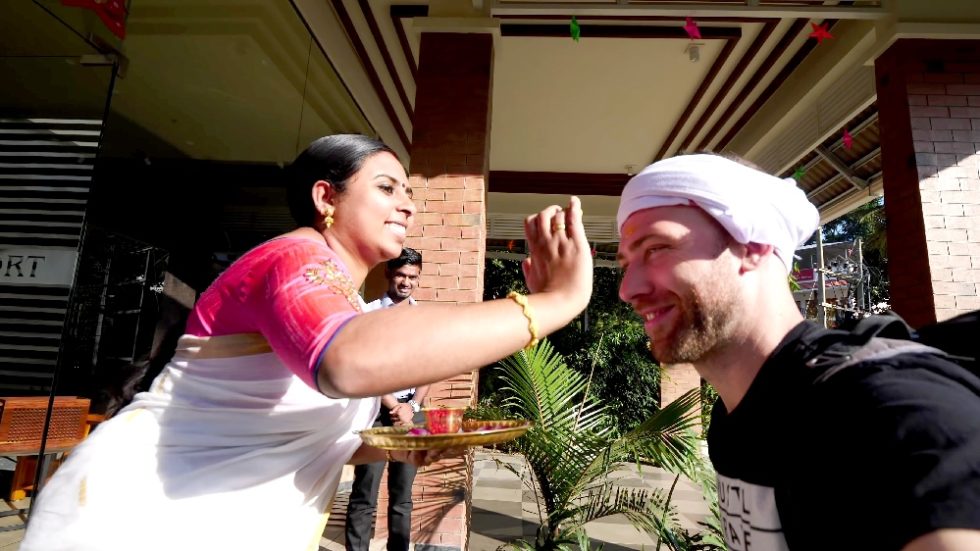 My room was unbelievable! It was actually a huge suite! It had a huge entry room with a couch, two seats, a rocking chair, a TV, a desk, WiFi, a stocked fridge, and a huge closet. My bedroom had three seats, a small loveseat, and a king-sized bed! It also had an amazing bathroom with a sink and a luxurious shower with a tub! It was immaculate, modern, and super clean. It was one of the best places I’d ever stayed at in India!

My first impressions of Thekkady, Kerala, India were that this place looked amazing! I couldn’t wait to go out and explore it. I have to thank my boy Ebbin for guiding me around for the majority of my time in Kerala. Be sure to check him out on YouTube and Instagram! 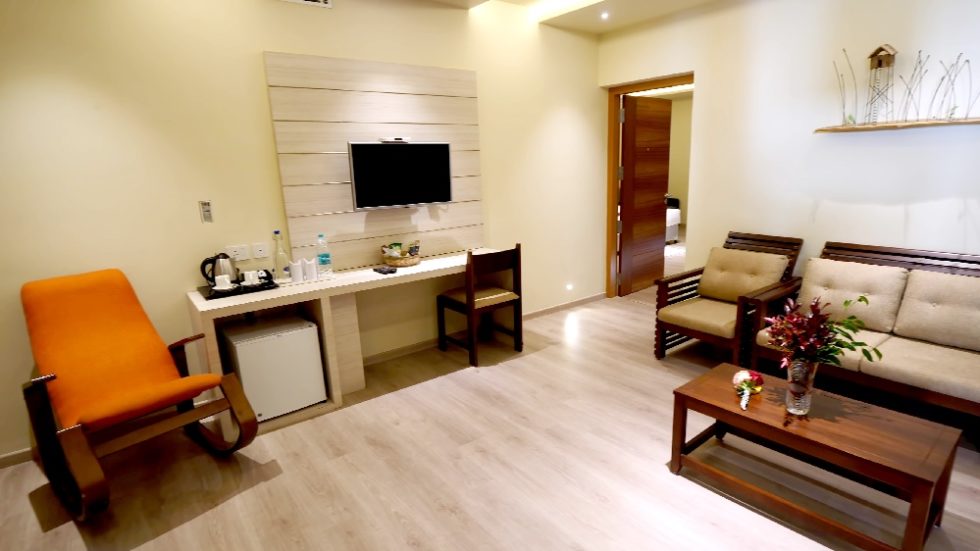 I also must thank the amazing staff at the Woodnote Resort, who made my time in Thekkady a one-of-a-kind experience I will never forget. They’re the best hotel in Thekkady! 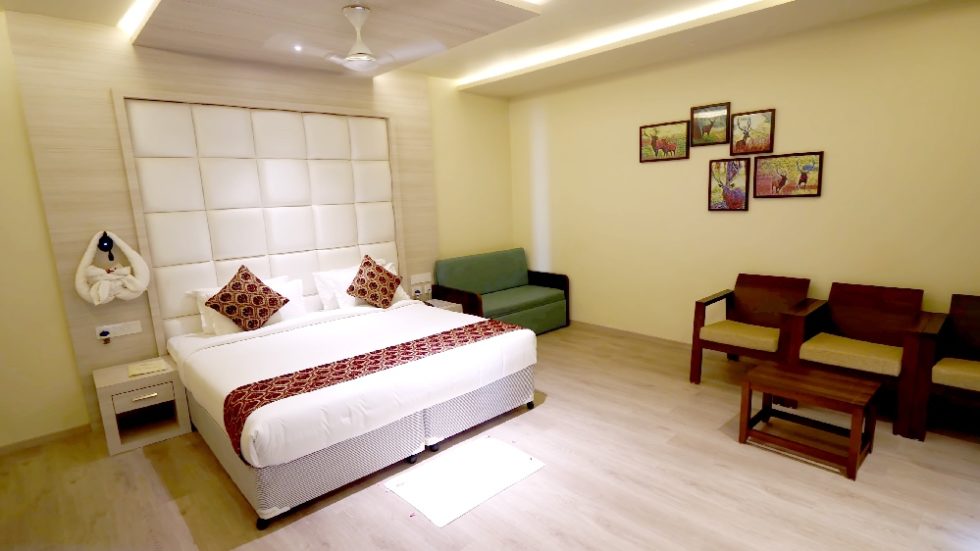 I hope you liked coming with me as I give my first impressions of Thekkady, Kerala, India! If you did, please give this video a thumbs up and leave a comment below. Also, please subscribe to my YouTube channel and click the notification bell so you don’t miss any of my travel/food adventures around the world!