Situated between the seaside cities of Kozhikode and Kannur along India’s Malabar Coast is the city of Thalassery. Formerly known as Tellicherry, Thalassery is a historically and culturally rich city that lies just about 14 miles south of Kannur, the largest city in the North Malabar region. But because of its historical and cultural significance, along with the commercial and educational impact it had on India’s history, Thalassery is not just a place to pass through on the way to Kannur or Kozhikode. In fact, there are many things to do in Thalassery, Kerala, India, that make it a place well worth visiting! 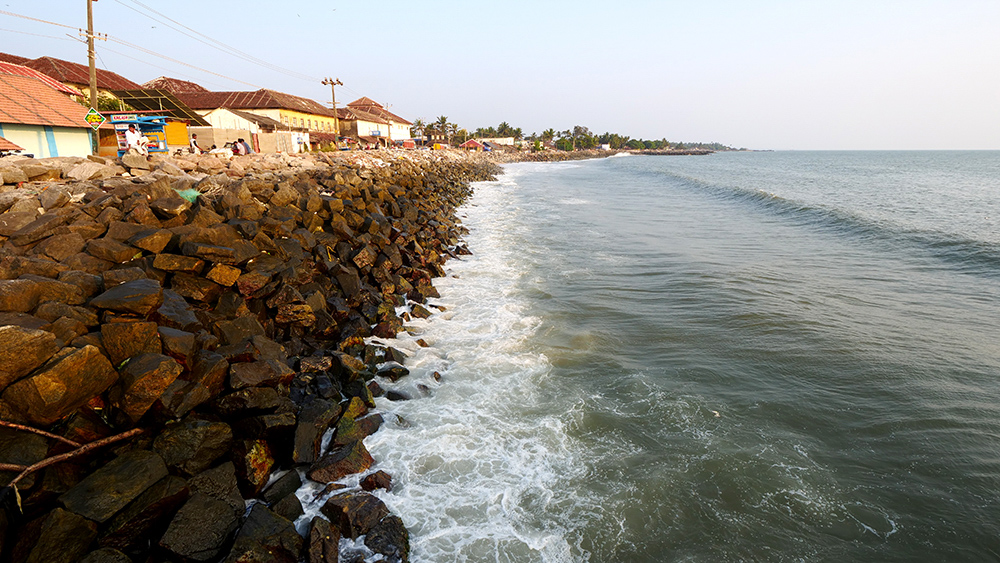 The third-largest city on British India’s western coast during the 18th century, Tellicherry was an influential hub during the spice trade. Early during that century, Tellicherry Fort was built in response to attacks on a British warehouse. The city is also known for its biryani, which uses short-grain Kaima and Jeerakasala rice instead of the basmati rice customarily used in other parts of India. The North Malabar region of Kerala is also home to Theyyam, a fascinating ritual performance art form that can only be found in this part of the world. 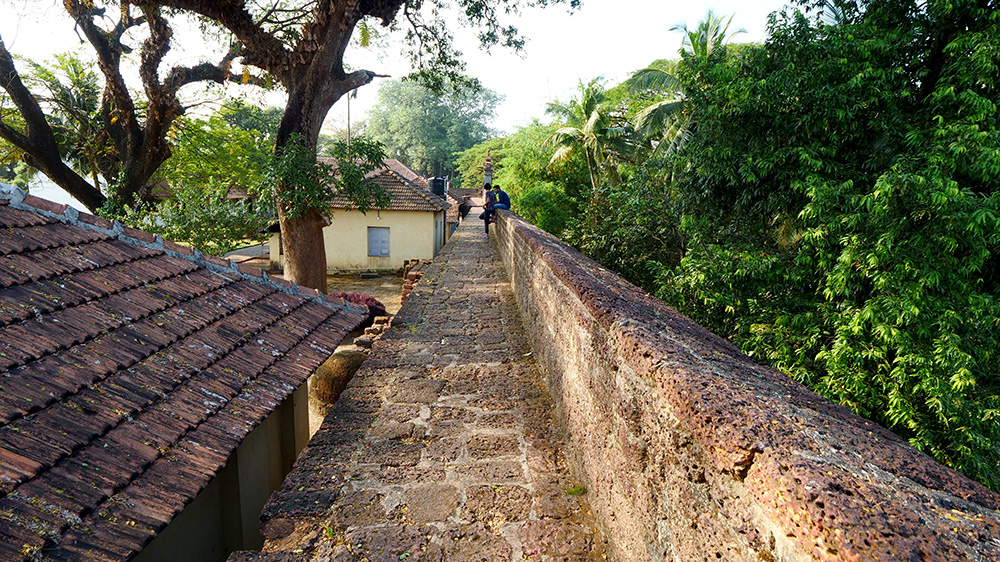 Because of its unique sites, food, and culture, Thalassery is a city along the Malabar Coast that deserves to be explored. It has everything a curious traveler could ever want to experience, and a whole lot more. These are the 5 things you must do in Thalassery, Kerala, India! 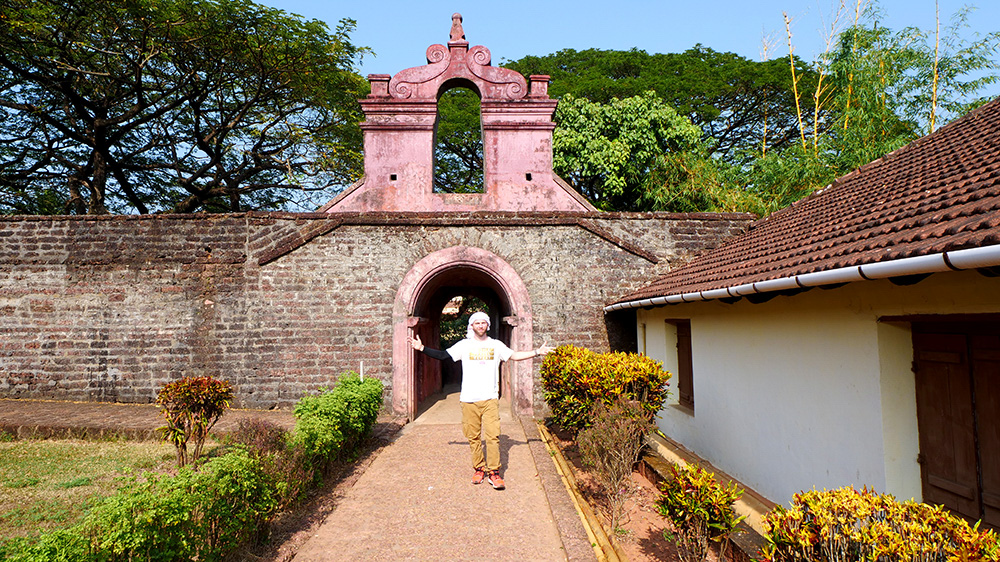 Easily the most prominent landmark in modern-day Thalassery, Tellicherry Fort’s history dates back to 1708. When the British established a factory at Tellicherry that year, the local chieftain, Korangoth Nair, and the Udayamangalam branch of the Kolathiri family responded with a violent attack that heavily damaged English property. To help prevent future attacks, the East India Company built Tellicherry Fort in the city’s outlying hills. The British Company later strengthened the fort in 1725 due to the French occupation of nearby Mahé. 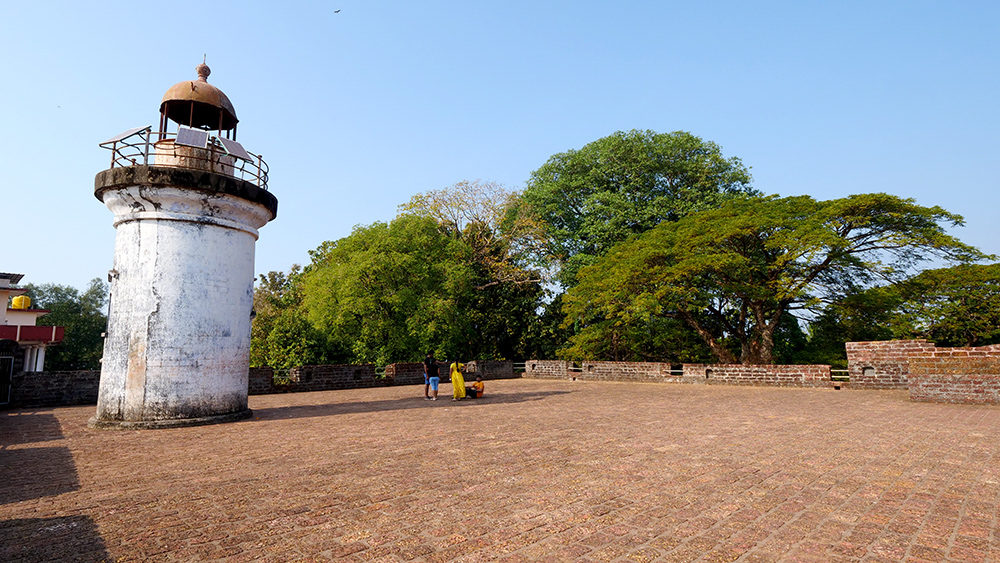 You can feel the history as you explore this massive, imposing fort. It’s one of the reasons why it’s one of the top things to do in Thalassery, Kerala, India. The square-shaped fort boasts 10-meter-high walls built from laterite that offer fantastic views of both Thalassery and the Arabian Sea. Inside the walls are an intact lighthouse and cottages that served as the barracks for soldiers. 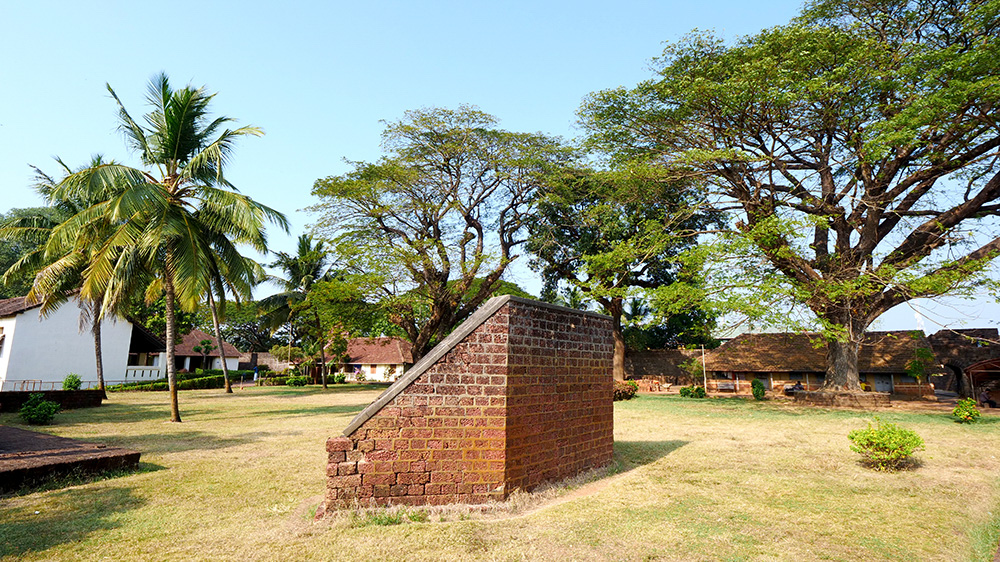 Something I found particularly interesting during my visit to Tellicherry Fort were the secret, underground tunnels that lead to the Arabian Sea. Between its walls, tunnels, and huge bastions, it was easy to see how Tellicherry Fort was an effective defensive structure. The fort has been protected by the Archaeological Survey of India since 1921 and is a must for any history buff visiting Thalassery! 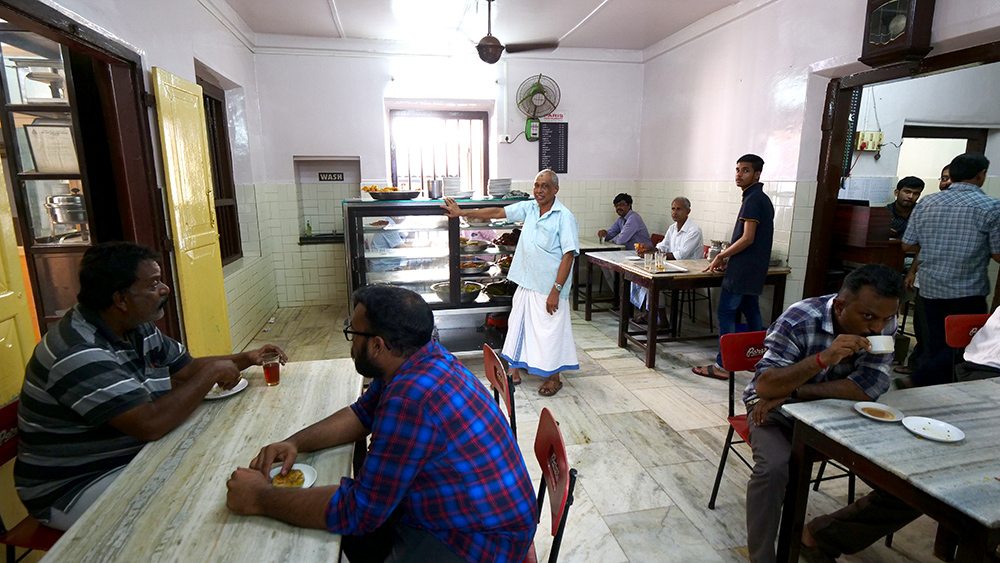 As I mentioned earlier, Thalassery is known for many things. While the city of Hyderabad is the best-known city in India for biryani, Thalassery’s biryani gives its Hyderabadi counterpart a run for its money! For the best place to try Thalassery dum biryani, head over to Paris Restaurant. 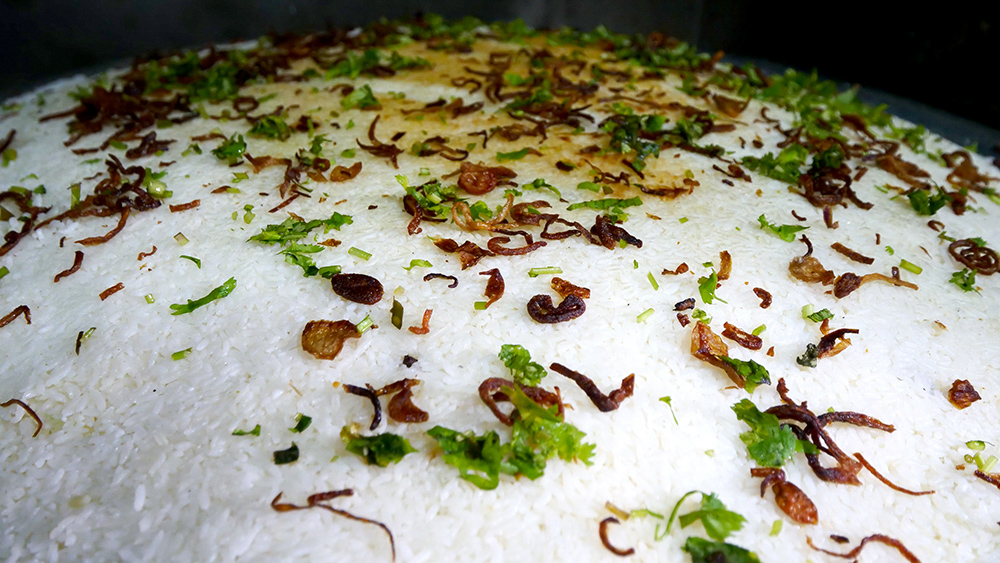 This layered rice dish contains aromatic ghee rice, coriander, fried onions, chicken, raisins, and much more. It is cooked with banana leaves on top. It’s served with a unique coconut chutney and mango pickle and a yogurt salad that contains curry leaves and onions. And while the Paris Hotel’s Thalassery dum biryani is light on spices, it is intensely flavorful. 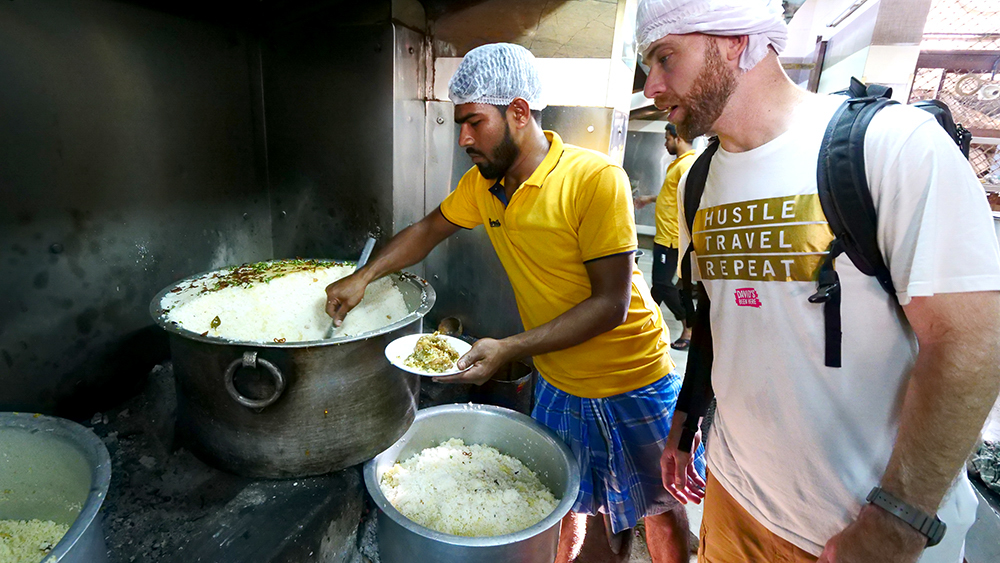 There are few things more delightful in Thalassery than grabbing a small bit of chicken with your right hand and mixing it with the short-grain ghee rice, coconut chutney, and mango pickle. The chunky, dry coconut chutney was made of pure, tender coconut and gave the dish a zesty, tropical flavor. It also provided a nice crunch, while the mango added a potent kick, and the raisins were sweet and fruity. 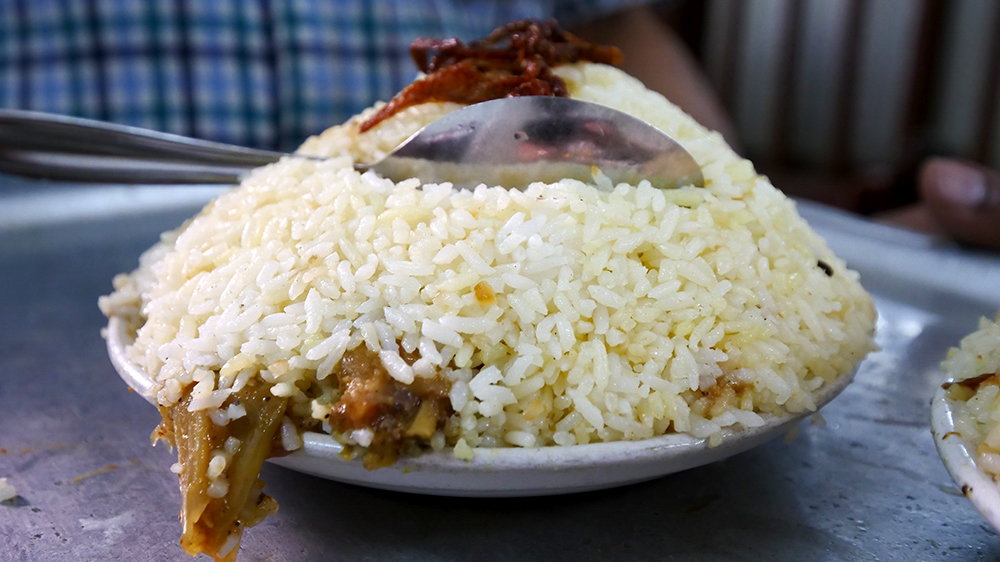 The mango pickle added a potent kick, and the chicken itself is so tender if falls right off the bone. I also loved the addition of the raisins, which added a sweet, fruity element. Try it with the yogurt salad to add a creamy, curd-like flavor and texture combination. 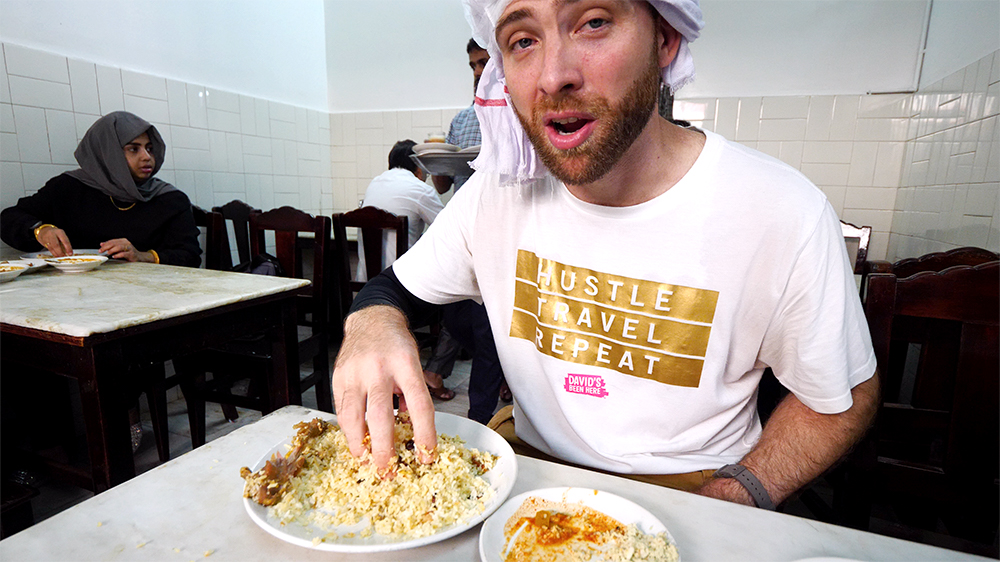 Check out the 10 Things You Must Do and Eat in Kochi, Kerala, India 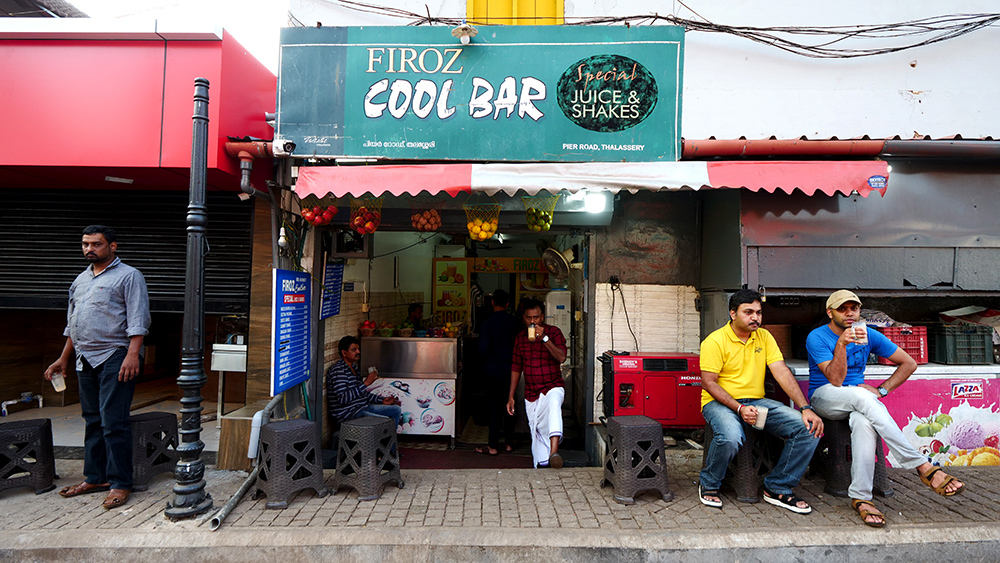 If you have room for a sweet treat after you indulge in Thalassery’s best biryani, I recommend burning some calories by walking over to Firoz Cool Bar. This spot in Thalassery sells delicious shakes and juices, which are perfect after a savory biryani! 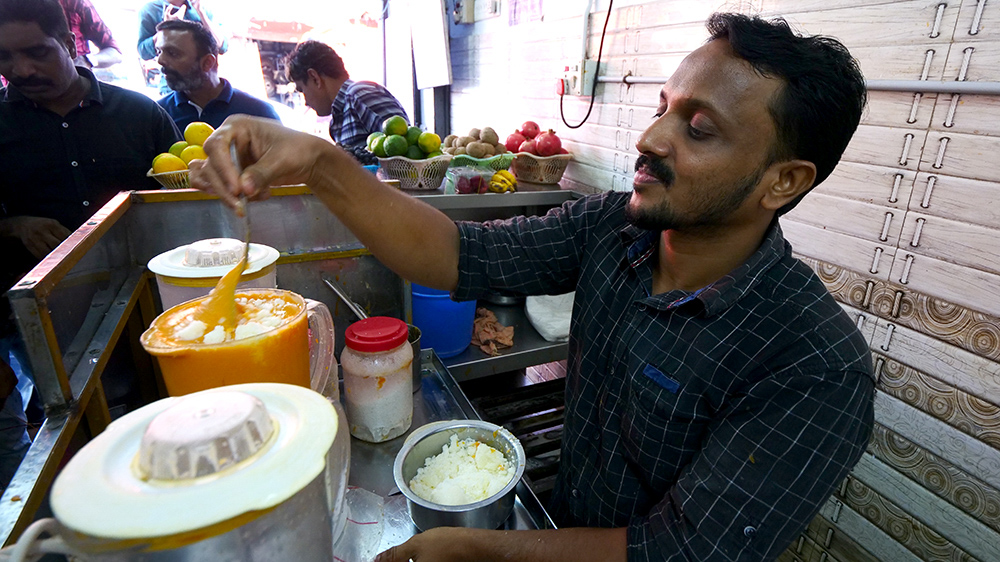 Something I can definitely recommend for the heat is their mixed drink called the Cocktail. It contains milk, papaya, banana, carrots, dried fruit, nuts, and pomegranate seeds and is a cross between a slushie and a smoothie. The milk in the middle is frozen, so it’s a refreshing, icy, and creamy treat that will definitely help you beat the nearly 100-degree South Indian temperatures. It only costs 60 rupees, or about $0.79 USD, so it’s also great for travelers on a budget. 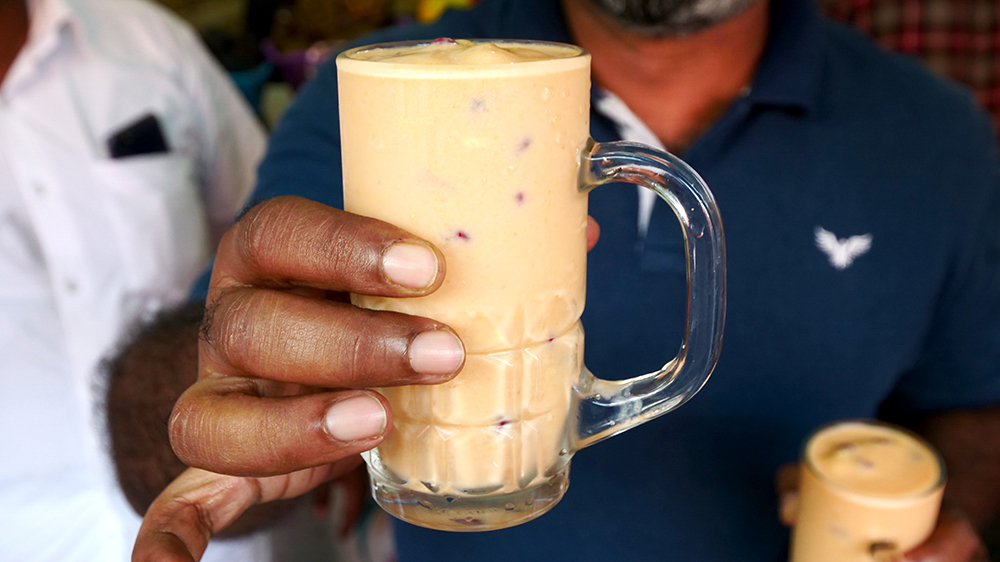 And if a mixed drink isn’t your cup of tea, you can also try their other drinks, which include date shakes, carrot shakes, strawberry shakes, and more! Having one is one of the best things to do while exploring Thalassery, Kerala, India. 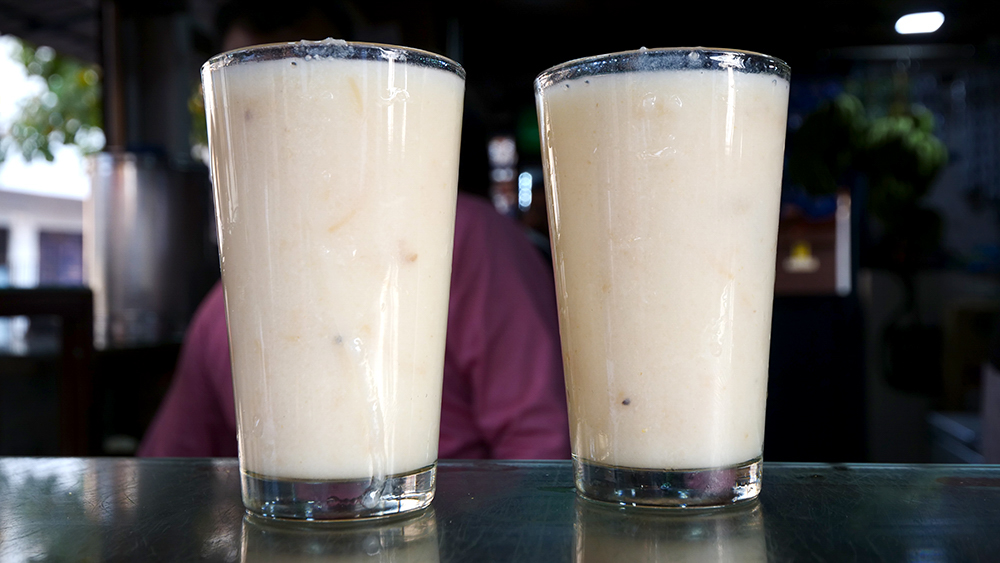 Near Firoz Cool Bar is another stall selling dozens of different snacks. There, you can find bunches of masala-coated French fries with curry leaves, rice cakes, banana fry, as well as and hot milk with semolina. 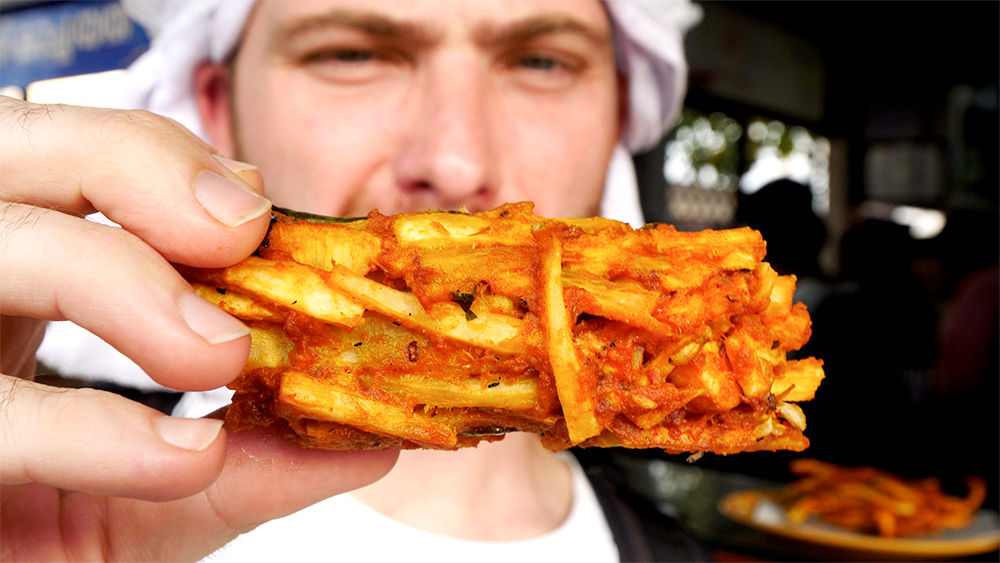 I tried the fries with masala and curry leaves, which are called chicken feet! They’re really hard, and I nearly broke a tooth on them! But once you chew them up, you get to taste the amazing masala on them. They reminded me of Cuban-style papitas fritas. They’re thin, crunchy, and contain onion, and have an incredible flavor. But unfortunately, they are very hard to chew, so I couldn’t finish mine. 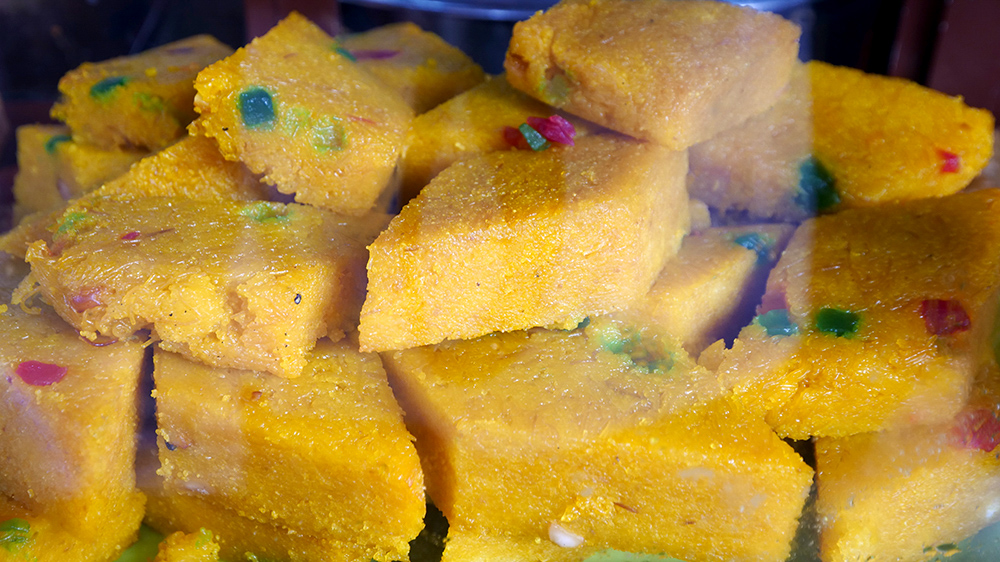 I recommend trying the hot milk with semolina. The semolina has a texture similar to gelatin balls, and the milk was like a hot, watered-down lassi. In my opinion, it’s not the best thing to drink in the Indian heat since it’s served steaming hot. It also contains vermicelli noodles and dried fruits like raisins. The flavor of the milk is incredible, especially with the fruit and the vermicelli noodles, for sure. It is pretty clumpy, though, so when you get to the last few sips, you’ll get a big mouthful of yummy dried fruit! 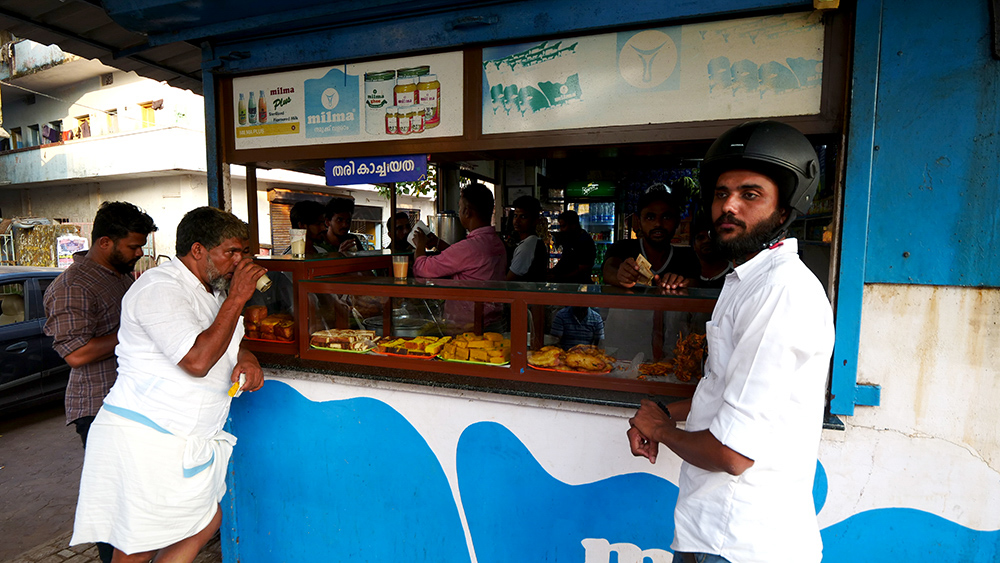 The snack vendors are located very close to the Arabian Sea. If you’d like, you can take a quick walk over to Thalassery Pier, which was built in 1910 by the East India Company. At the time, it was used as a means to transport goods to and from ships. Today, it’s a great place to go for a walk and see the ocean! 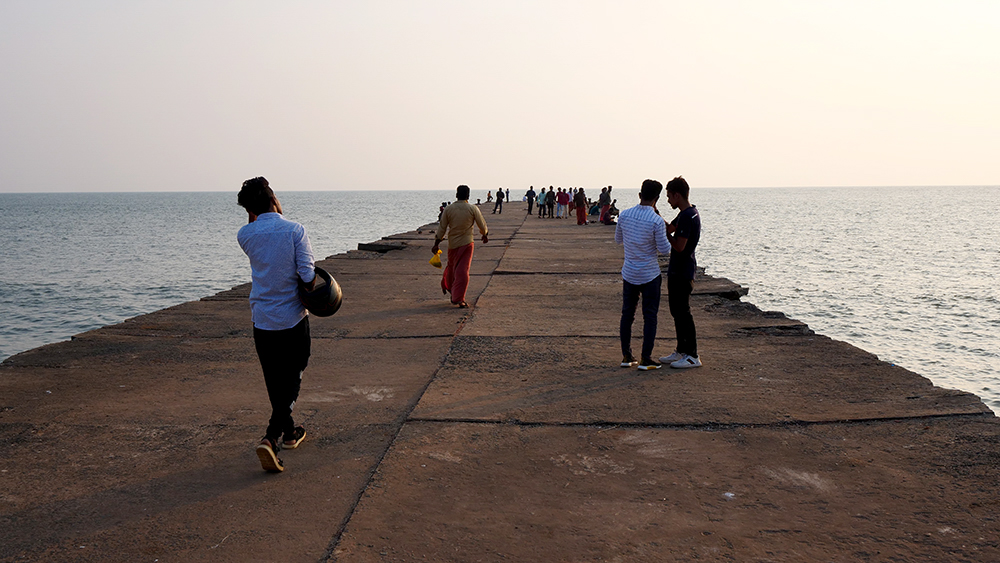 I recommend checking out a sunrise or a sunset there. If you have the time, a walk down Thalassery pier is another of the top things to do in Thalassery, Kerala, India! 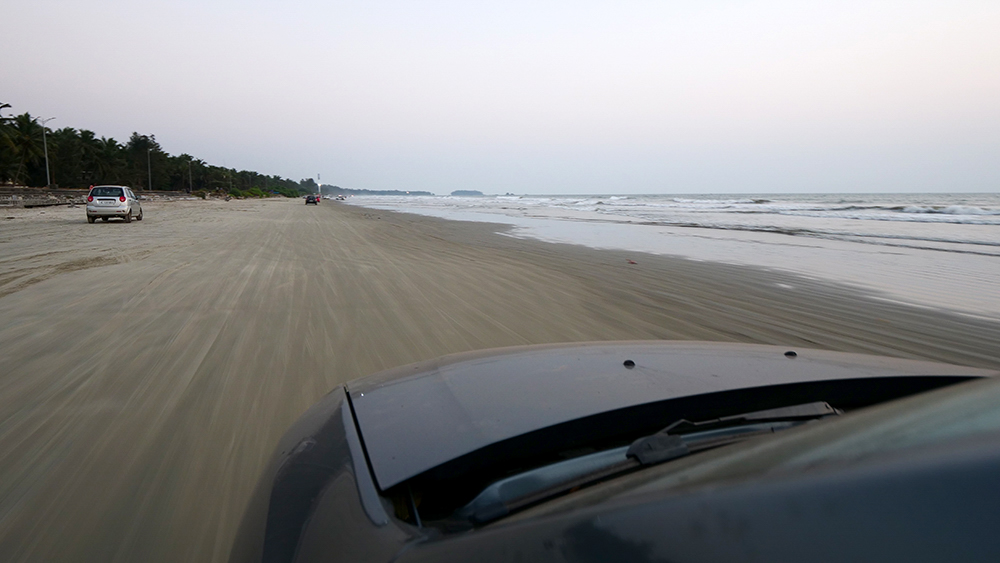 For travelers making their way up to Kannur, or from Kannur to Thalassery, there are few activities better than visiting Muzhuppilangad Drive-In Beach. Muzhuppilangad Drive-In Beach is a wide, roughly 5-kilometer-long (3-mile-long) beach with dense, packed sand. The packed sand makes it safe for cars to drive on it. It’s the largest drive-in beach in all of Asia and is bordered by black rocks that protect the beach from strong ocean currents. 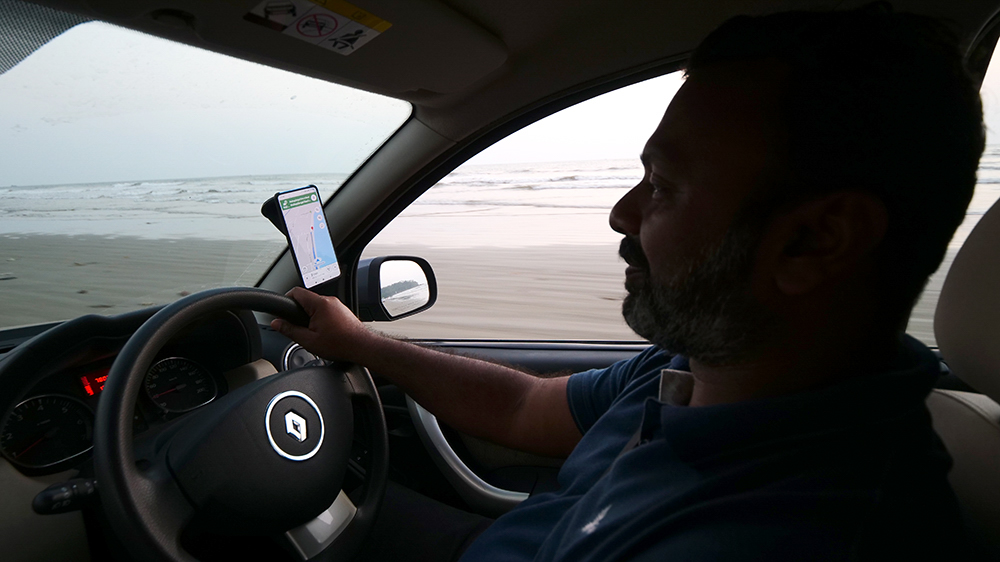 You can easily reach the beach from Thalassery. After you cross Moidu Bridge, take a left turn just before the first railroad crossing. This will take you down an unpaved road that winds through coconut tree groves and leads directly to the beach. 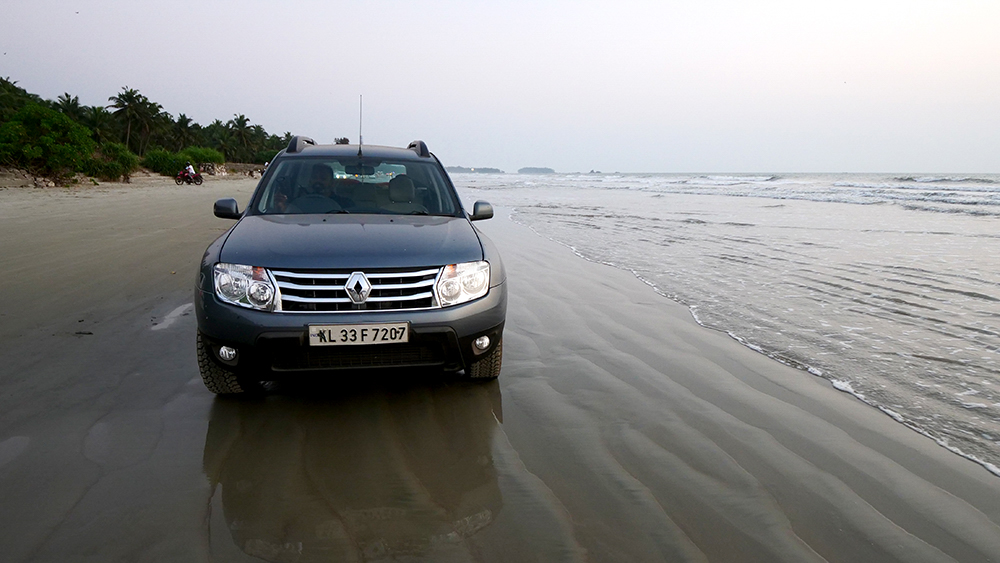 The speed limit on the beach is 20 kilometers per hour (about 12 mph). Of the beach’s five-kilometer stretch, visitors can drive on four of them. A festival is held there every April. The beach is also a popular spot for young people to try driving stunts along the shores. 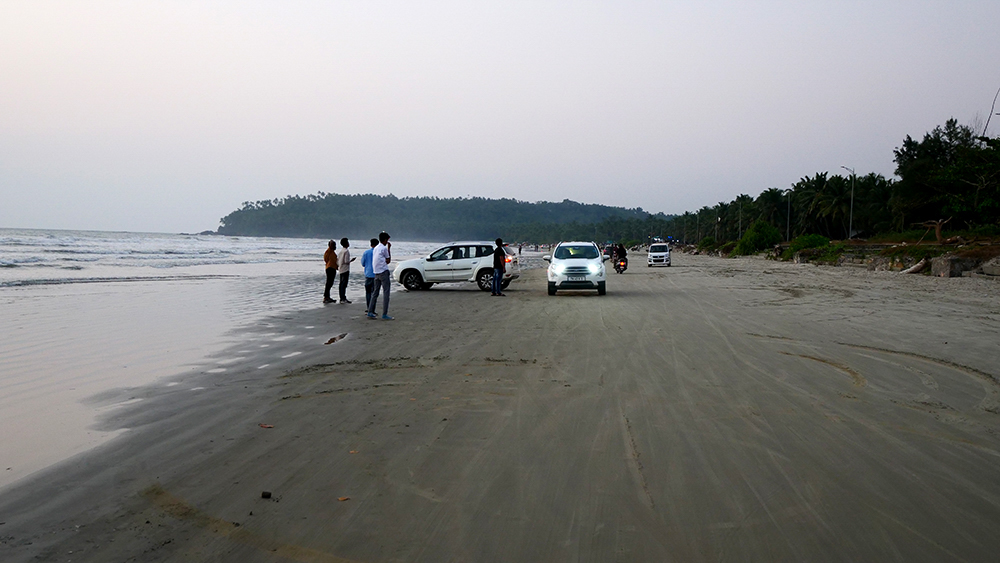 My visit to Muzhuppilangad Drive-In Beach was my first time driving onto a beach. My friend Ebbin and I arrived there just after sunset. The view looking out at the Arabian Sea was breathtaking. Although it was late in the evening, there were lots of families there. The beach was also full of vendors selling snow cones. I even saw some people playing soccer and splashing around in the water. 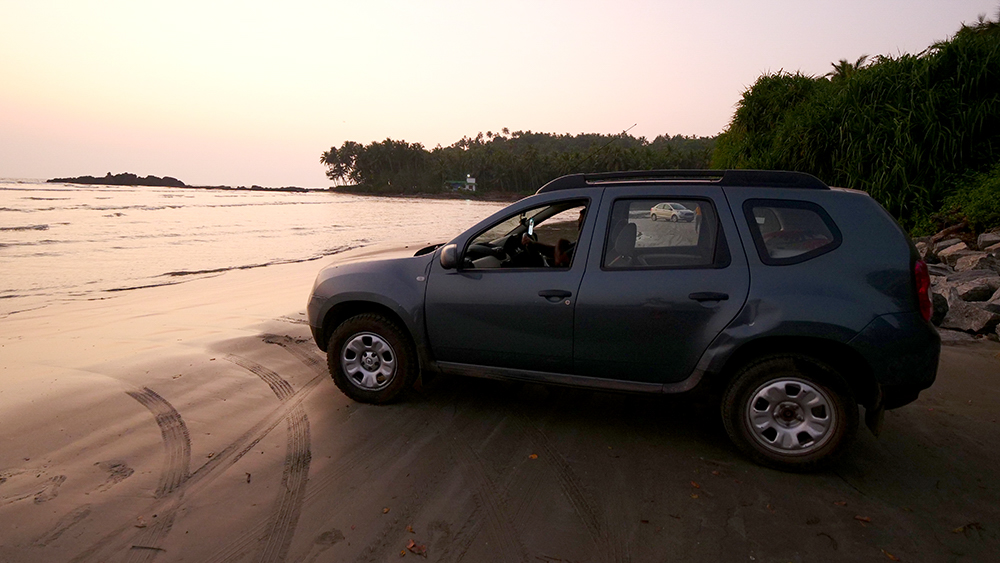 I could definitely see why it’s one of the top things to do in Thalassery, and all of Kerala, India. Even though I only spent a short amount of time there, I have to say, it’s an absolute must!

BONUS: Eat at the Bombay Hotel 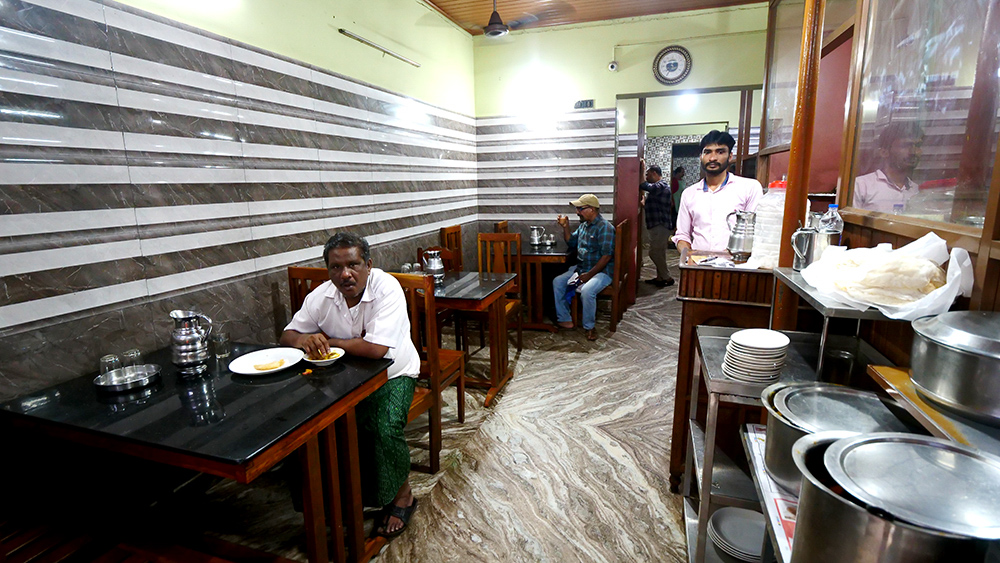 No doubt about it, one of the best things to do in Thalassery, India is to eat at the Bombay Hotel. It’s one of the best and most well-known restaurants in the city. There, you can enjoy lots of southern Indian favorites, but I highly recommend their stellar string hoppers and egg curry. As is the case at most restaurants in southern India, you’ll eat this meal with your hands, so don’t be afraid to get messy! 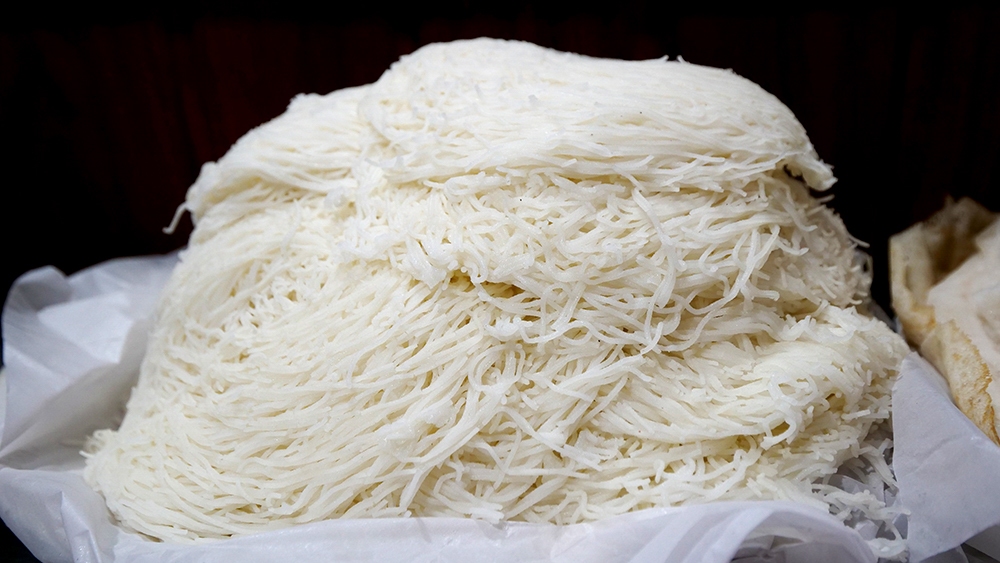 The string hoppers and egg curry are served on a banana leaf, and the egg comes in a tangy and spicy tomato curry. The curry contains juicy, mouthwatering tomatoes and roasted onions. It reminded me of a curry I’d had during my travels through northern India in 2018 and was fantastic with the rice noodles of the string hoppers and the perfectly cooked egg. The flavors blended extremely well with the heat and were like heaven on my palate. 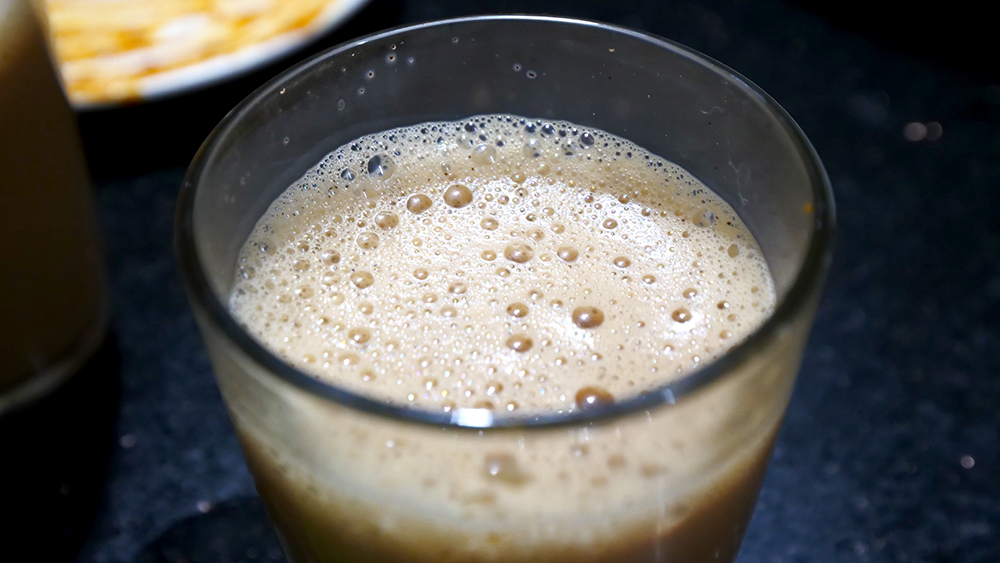 If you want to get tasty egg and curry flavor in every bite, make sure you break the egg up into small pieces. Mix both thoroughly until the string hoppers are completely coated. Then, go to town on it! Wrap up your meal with some ginger chai, or if you have room for more, try their amazing-looking chickpea curry. Best of all, the food is inexpensive (a three-person meal cost us only 180 rupees, or $2.37 USD) and the restaurant is open all day long, from 7 p.m. to 10 p.m. 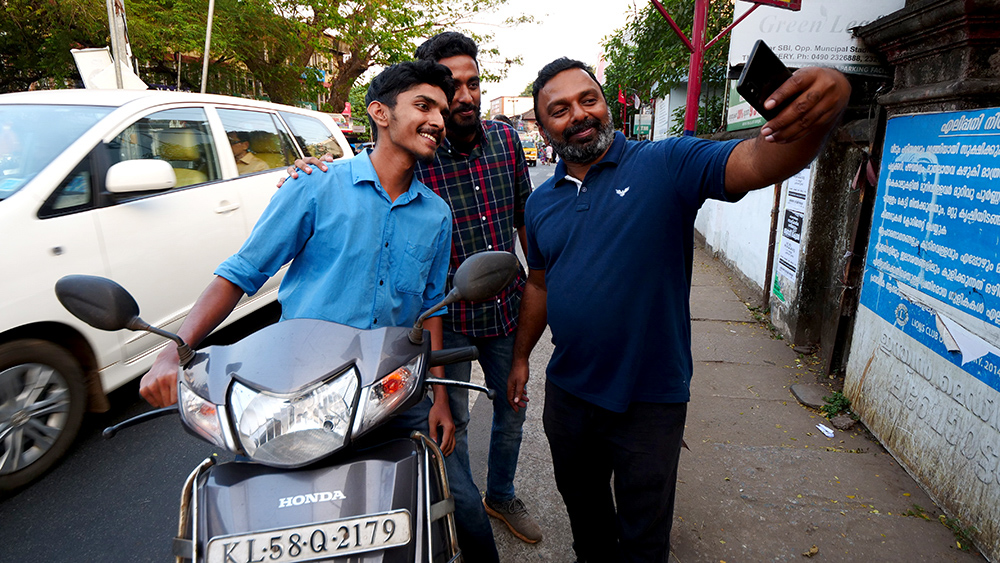 As you can see, Thalassery couldn’t be further from just another place you pass through between Kozhikode and Kannur. It’s so much more than that and has a lot to offer travelers of all types. The world-class biryani and frozen drinks are worth a visit by themselves, and history lovers will love the opportunity to visit Tellicherry Fort. And anyone who loves fun and unique experiences should not miss Muzhuppilangad Drive-In Beach. It’s one of the coolest experiences I had in Kerala and was a major highlight of my time in Thalassery. Mix in friendly locals and the unmistakable richness and beautiful chaos of India, and you have a city that is bursting with immersive opportunities. Book a trip to Kerala today to experience Thalassery for yourself! 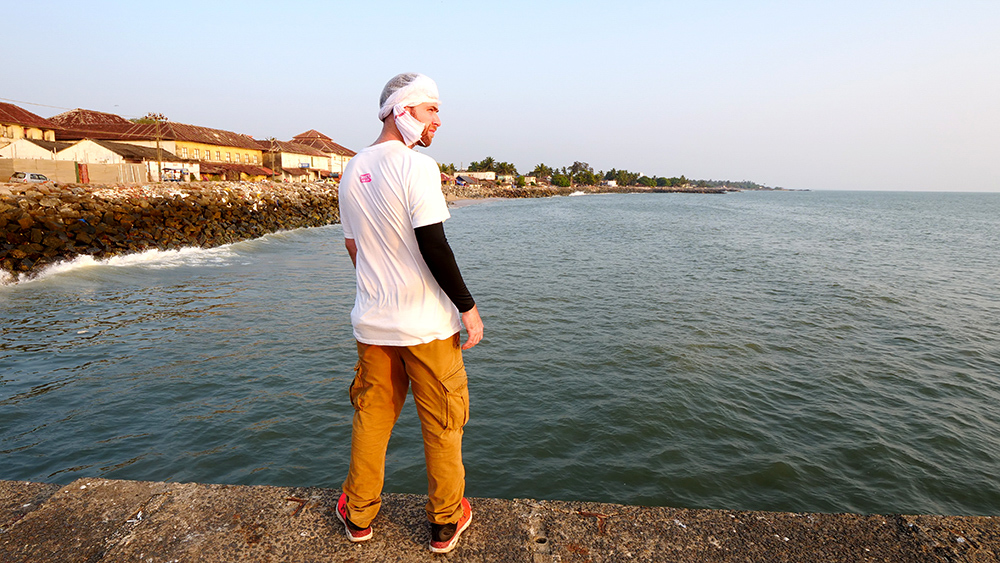 I have to thank my good friend and fellow travel/food vlogger Ebbin Jose for driving me around Kerala for ten whole days. He helped organize most of my Kerala itinerary, and my Kerala articles and episodes would not have been possible without him. Be sure to follow his food adventures on his Instagram and subscribe to his food and travel channel on YouTube!