After driving four hours from the mountain town of Munnar, India to the coastal city of Kochi, my seventh day in Kerala continued with an epic nighttime street food tour! Join me as I go on a Kochi Indian street food tour where I try prawn curry, an egg dosa, and mud chicken in Kerala, India!

My evening began in Kochi, the commercial hub of God’s Own Country, Kerala, India! I was so excited to go on this Indian street food tour of Kochi. The city is literally a concrete jungle within a jungle! There were so many trees everywhere! 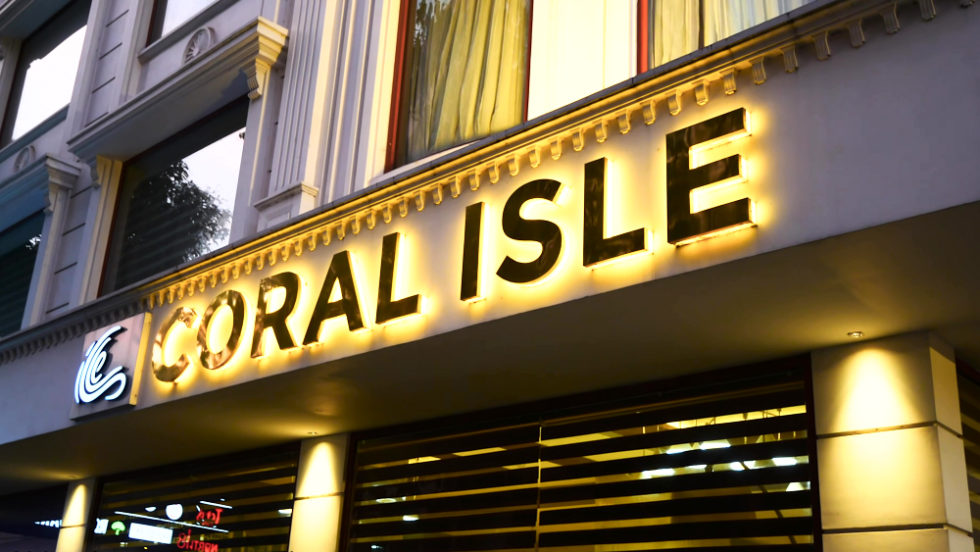 While I waited on my boy Ebbin to pick me up for my Kochi Indian street food tour of this awesome city in Kerala, I headed inside my hotel, the Coral Isle Hotel. There, I’d have some spicy prawn curry to whet my appetite. The hotel has a rooftop restaurant called Upper Berth and a pool. It’s incredible. There’s also outdoor seating, and up top, you have a 360-degree view over the city from the entire rooftop. In the restaurant, there is artwork on the walls that shows the history of the city. 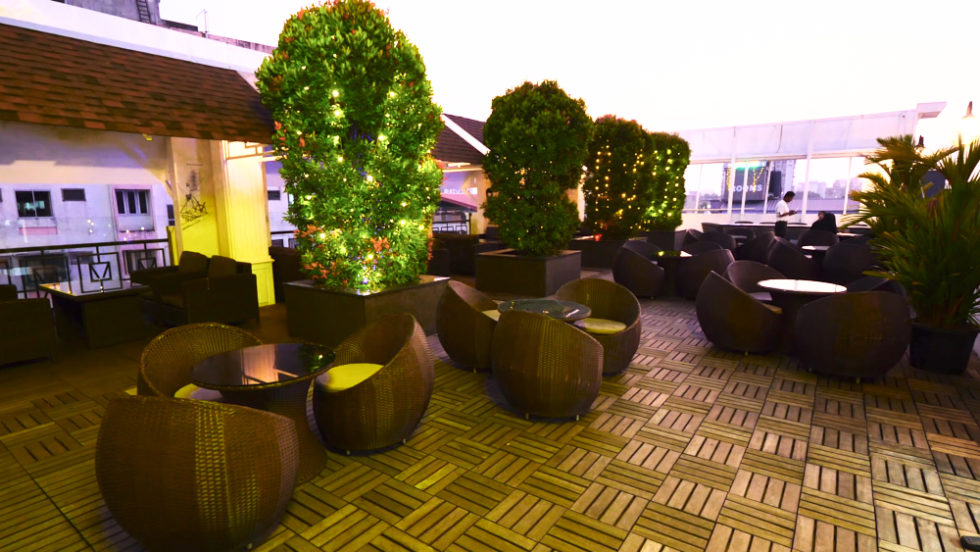 At the Upper Berth, you can witness some live cooking. I met the cooks and watched them start on my prawn curry. It looked so good! They added six spices including chilies, coconut paste, black pepper, curry leaves, and onions along with the prawns. I’d be having it by itself. They took the curry and wrapped it up in a big banana leaf and then grilled it! They told me it would be medium spicy, but I wanted super spicy!

The dish looked phenomenal and tasted even better! It contained an overload of coconut with the coconut paste and had a nice spiciness. It was still really hot but was so ridiculously tasty. It was sweet and succulent and was super delicious! I loved the chilies, black pepper, and other spices in it. 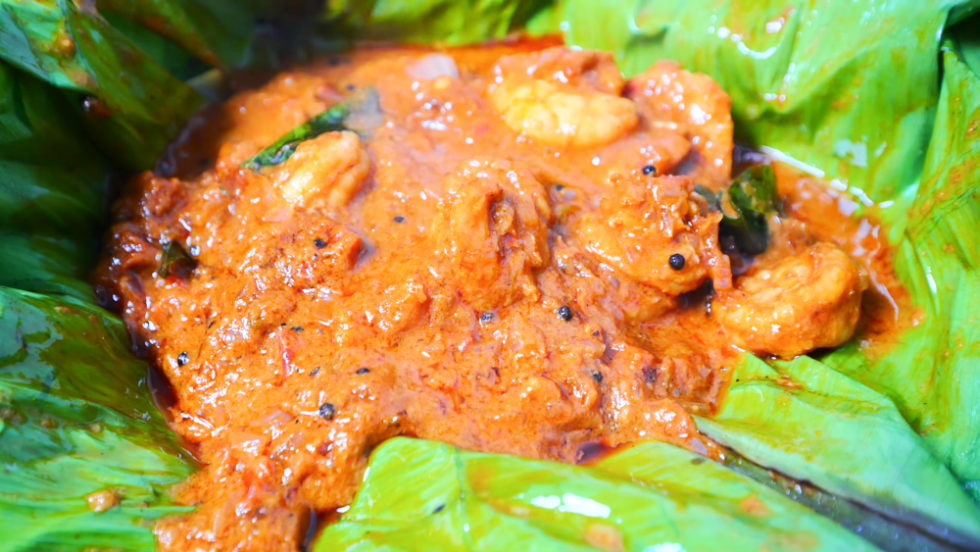 It had some spiciness to it, but it wasn’t killer. It was more of a tingling in my mouth. The flavor of the banana leaf was infused into the curry, which was the best part. But I also loved the coconut flavor. I would have loved a parotta with it! It was creamy, hot, and simply out of this world. This is why I wanted to come to Kerala, because the food is so diverse and there’s so much seafood! It was the best prawn curry of all time! 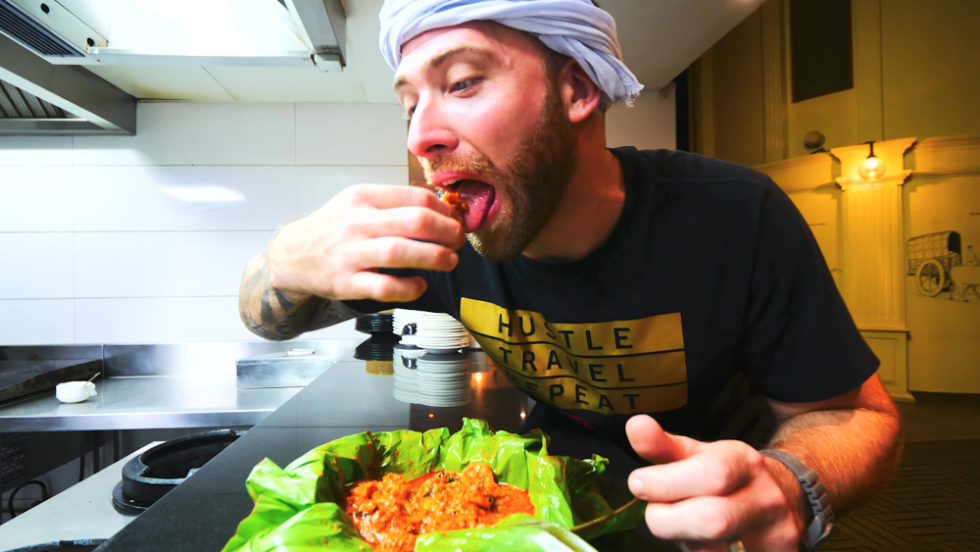 Then, I headed out and met up with Ebbin. He took me to try clay-baked chicken, which is like Beggar’s Chicken in China. My first night in Kochi reminded me a lot of my first night in Mumbai. There was lots of traffic, a lot of buses, and the metro system. In Mumbai, they have a skyway that crosses the entire city. It was a little different here but similar.

We came across a random vendor selling egg dosas out of the back of a tuk tuk. Ebbin met some fans of his there! I hadn’t had an egg dosa yet, but I couldn’t wait to try them. They looked like the tata dosas I’d had in Varkala, like standard pancakes. They looked so good! I watched as the cook spooned the batter onto the griddle and added an egg mixture with onions, chilies, and other things on top of it before flipping it! You eat them with sambar and tomato chutney. 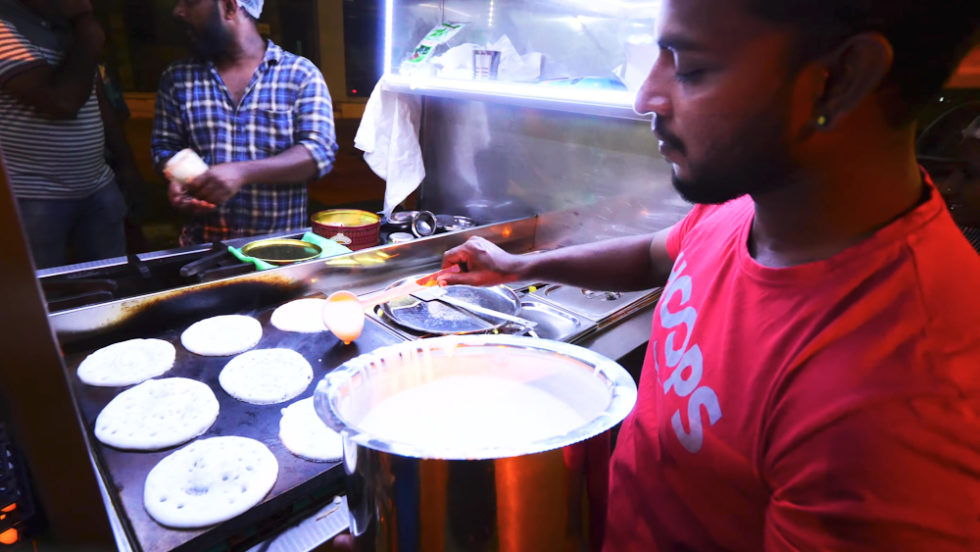 It was a nice dosa and had lots of peppers. If I hadn’t known it was a dosa, I would have thought it was straight scrambled eggs! I loved the pepper, and the tomato chutney was so juicy! It was like biting into an actual tomato. It was so different and so tasty! They usually come with coconut chutney and mint chutney, so this was new for me. 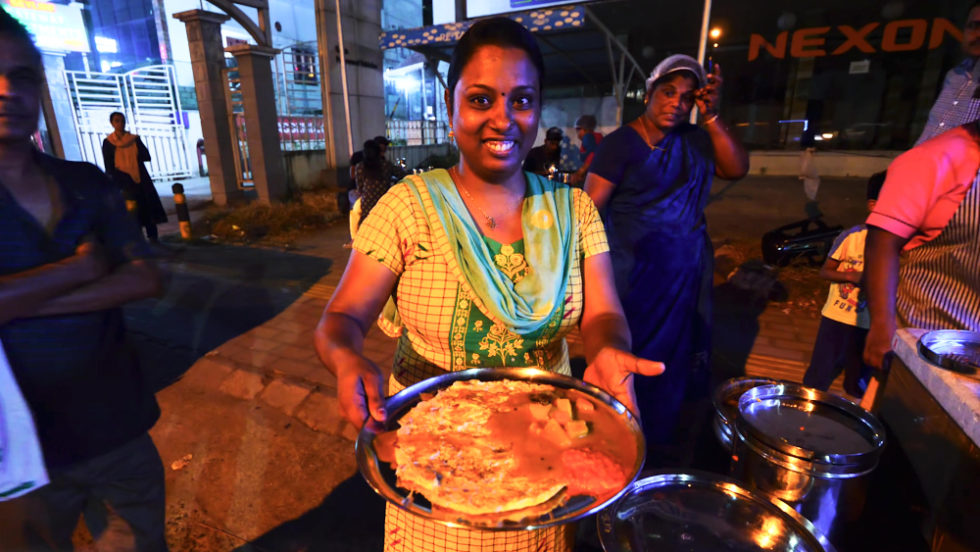 The sambar was light and wasn’t too spicy. It felt like I should be having it for breakfast. It was so good, I ate the whole thing! Then, it was Ebbin’s turn to try. He loved the tomato chutney and the egg flavor! 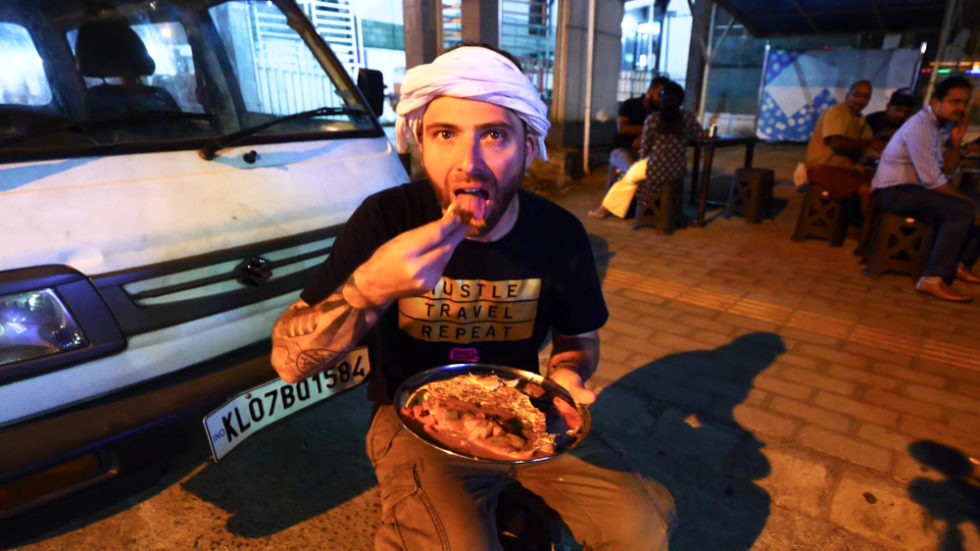 The dosas in southern India vary by state, but they’ll all blow your mind. Some are fluffier while some are doughier and crispier. Ebbin kept running into fans there since he’s a local food and travel vlogger. It was so awesome to see! The vendors didn’t charge us for the dosas because they didn’t have the egg dosa on their menu as a start-up food truck. They were super nice!

Then, we ran to get back in the car to our next spot, Midnight Chicken, where we’d get some mud-baked chicken. I watched them cook it outside. The place was packed and had a line going outside, so we had at least a 10-minute wait. Their Arabian chicken smelled heavenly and had tons of marinade on it. I could also see shawarma. But I was there for the mud-baked chicken! 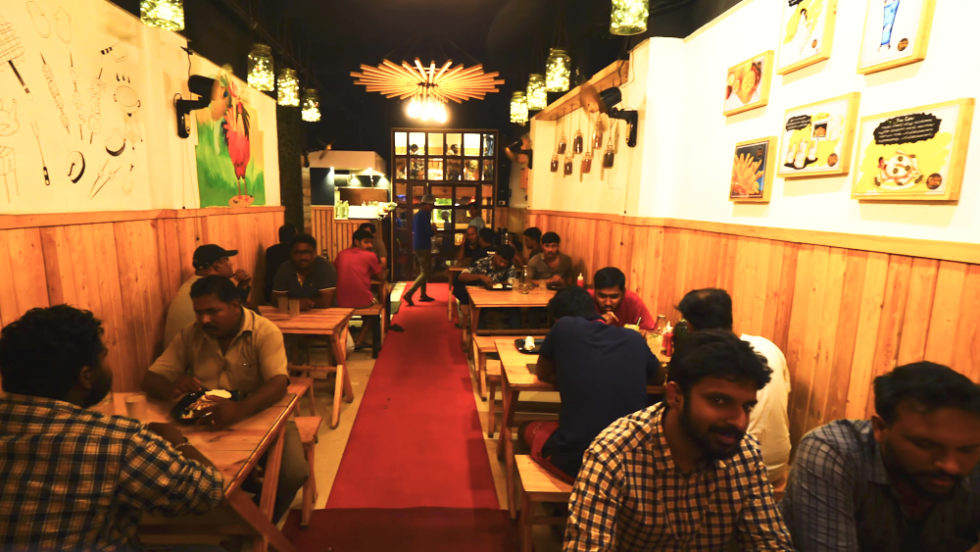 We walked through the restaurant to a dining hall on the second level. Our waiter brought it and unwrapped the foil around it. Inside was another bundle of foil covered in hard, baked mud. He cut this foil open to reveal chicken and rice wrapped in a banana leaf! He used scissors to cut the chicken open. It looked so good. This dish is meant to be eaten by four people! 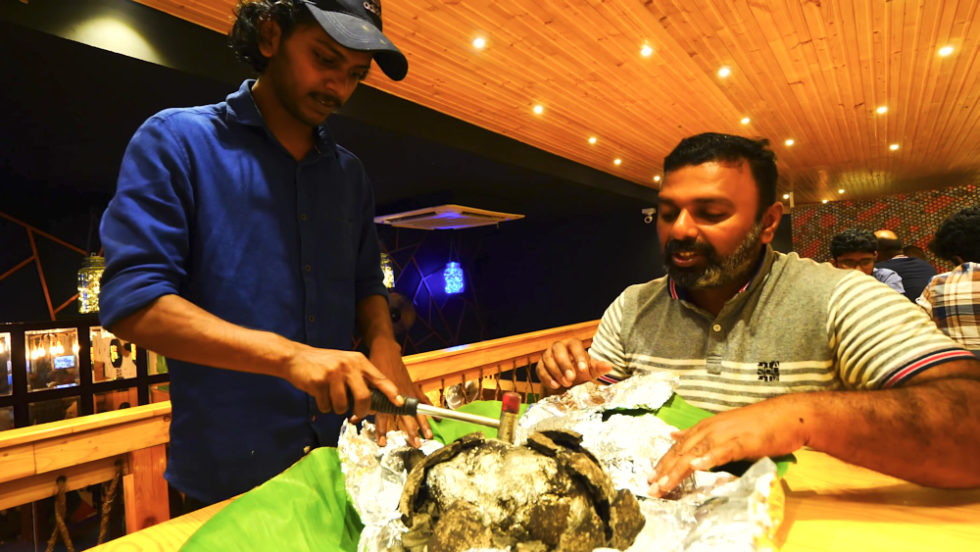 The chicken was so soft. It tasted like biryani with less rice. The flavors were out of control! It wasn’t spicy at all. Then, I dipped it into a light but spicy chutney, followed by mayo, which was nice. I don’t love mayo, but this was fresh, house-made mayo. It was so good and so different. I’d never had baked chicken like it. The mud and the banana leaf really changed the flavor! 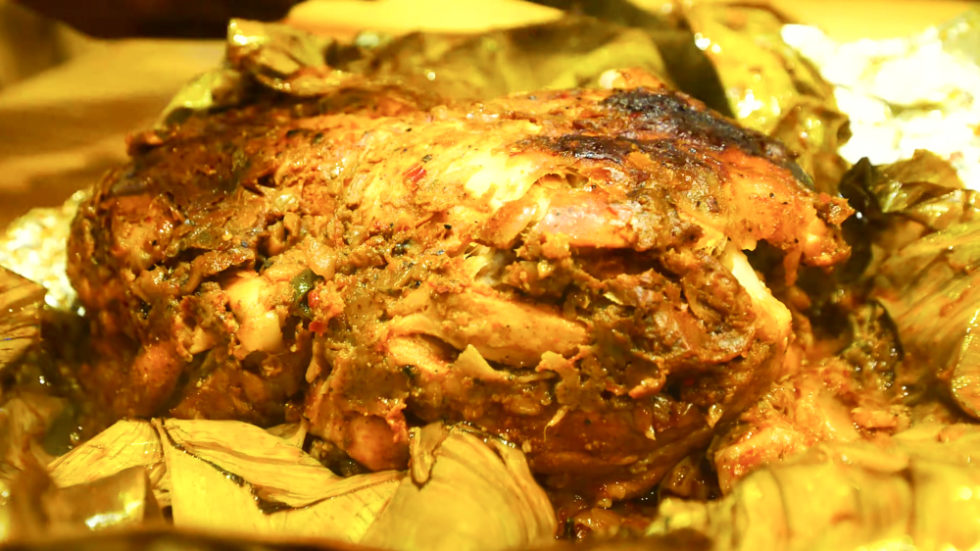 The chicken was so tender that it fell apart at the slightest touch. The chutney was good, but the spice in it was starting to hit me! It was actually damn spicy! Everyone should come to this restaurant and eat this chicken! It costs 630 rupees/$8.30 USD for a meal for four. It was so freaking fire!

We still had a few more places to visit. We arrived at a jam-packed stall along the side of the street. It was 9:30 at night, so the city was starting to shut down. I was hoping to hit at least one more place after this! I watched them fry some marinated chicken. We got some chicken fry and beef dry fry. Beef dry fry is a specialty here in Kerala! 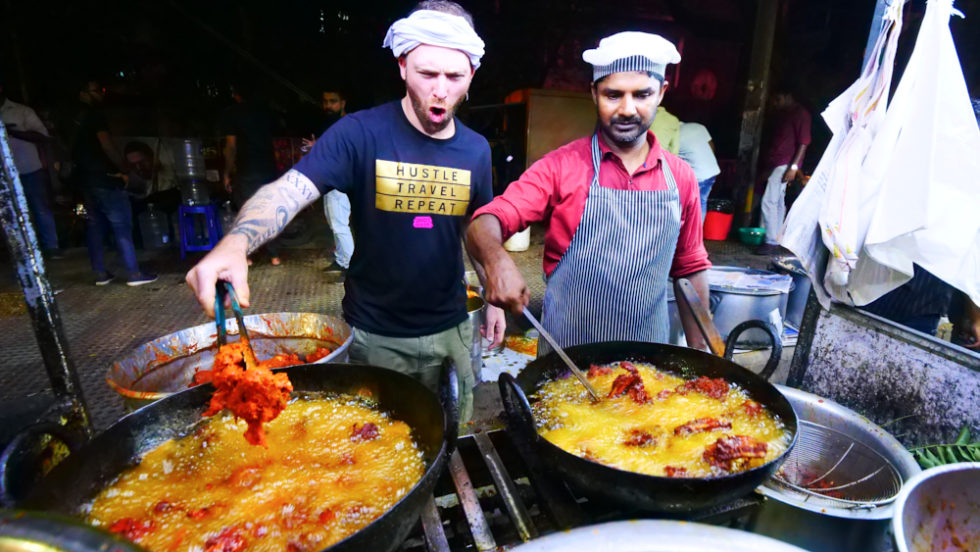 The beef dry fry was chewy and had a nice crust on it. It wasn’t too deep-fried, while the chicken definitely was. The chicken contained a nice masala on it. I felt like I could eat a ton of the beef dry fry with some beer. The “dry” part means it doesn’t contain wet ingredients like curries or gravies. The crispy, dry outside gives it a nice crunch! 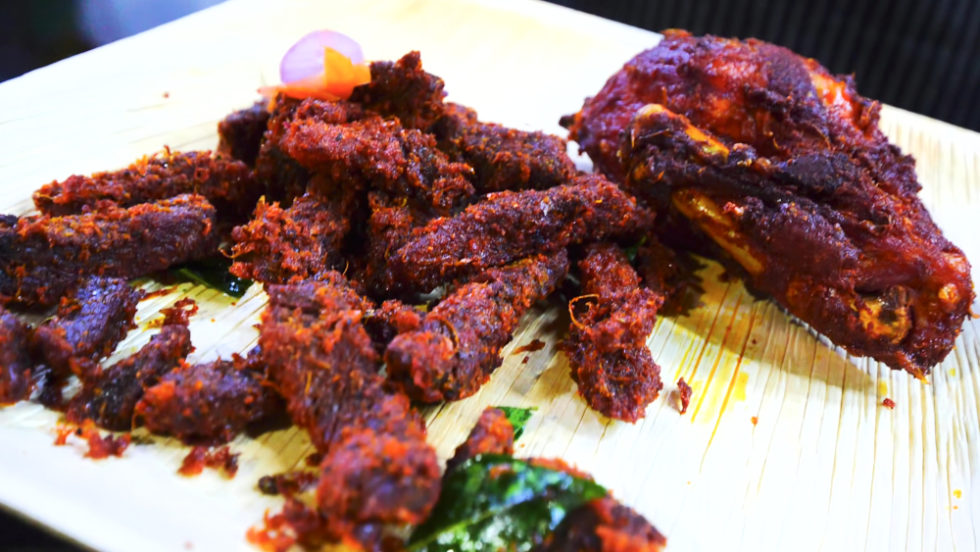 Meanwhile, the chicken was one of the best fried chickens I’d ever hand in India. It was right up there with Korean fried chicken and American fried chicken for me! It was really organic and super tasty! But as good as it was, it couldn’t beat the beef dry fry. 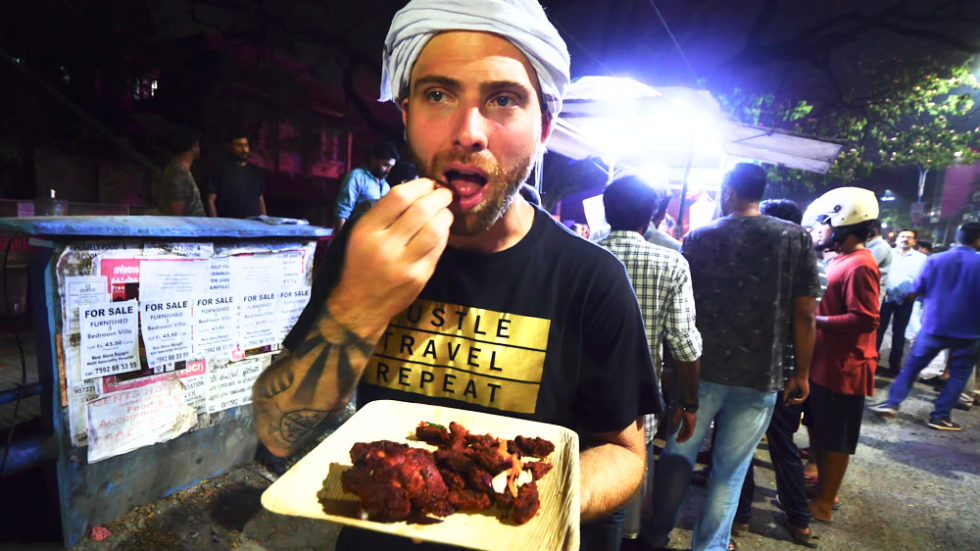 I have to give my boy Ebbin a huge thanks for bringing me to his hometown of Kochi! Follow him on Instagram and subscribe to his YouTube channel for lots of amazing food and travel content! I also must thank my friends at the Coral Isle Hotel for the outstanding accommodations and the phenomenal prawn curry! 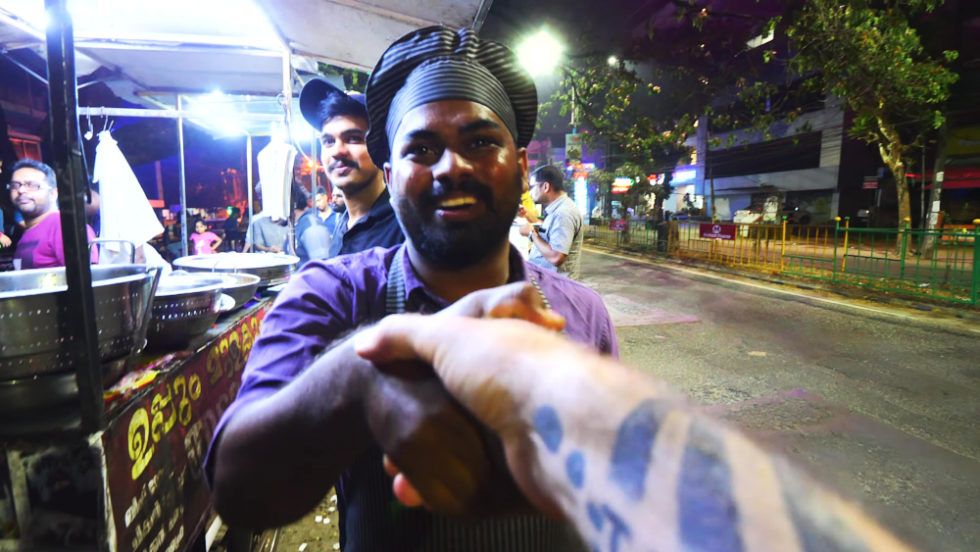 I hope you loved coming with me on my Kochi Indian street food tour in Kerala, India! If you did, please give this video a thumbs up and leave a comment below. Also, please subscribe to my YouTube channel and click the notification bell so you don’t miss any of my travel/food adventures around the world!