After spending a couple of days exploring the Assamese city of Guwahati, I headed off to Manas National Park, a UNESCO World Heritage Site and tiger and elephant reserve in northeast India near the India-Bhutan border. We started our day at 5 a.m. and drove three hours straight north to get there. The roads were bumpy, but it was totally worth it to get to see this magnificent place in-person.

I wasn’t planning on wasting any time. My plan was to get there around 8 a.m. and immediately go on a safari so I could see as many animals as possible. We arrived at the Florican Cottages, which are guest houses near the park. I was ready to head out, but we decided to get breakfast first at an open-air restaurant.

Our meal was a British-style Indian breakfast with toast, an omelet, orange marmalade, bananas, butter, and mango juice. The orange marmalade was tangy and had a little lime zest in it! 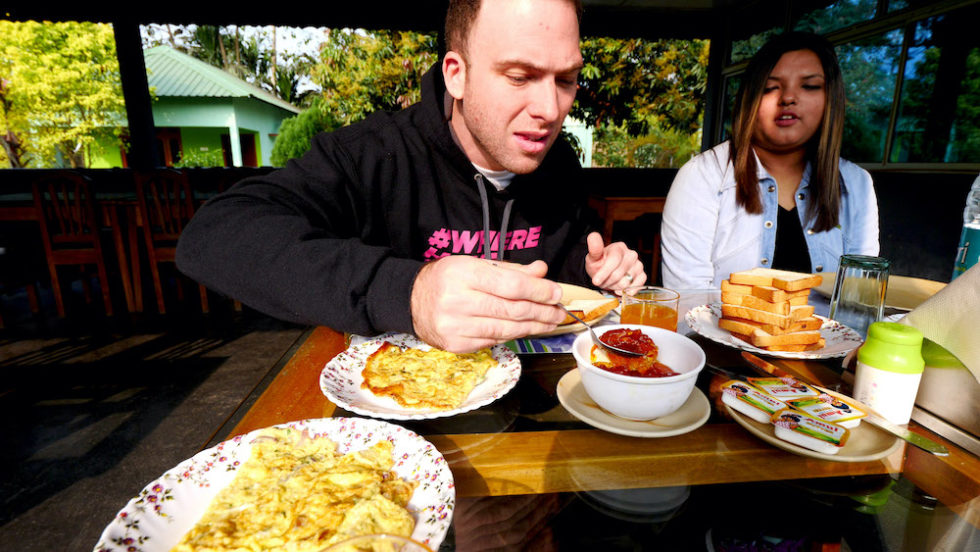 I decided not to use any butter, but it was better like that! The eggs were really nice and full of herbs and onions. I loved the omelet. It was cooked in oil and was light and delicious.

Then we headed out on a Jeep to begin our safari! I really wanted to see a tiger, because tiger sightings are very rare in Manas National Park, even though it is a tiger reserve. There are also elephants, deer, and rhinos there. There aren’t many rhinos, but some of them were transported there from Kaziranga National Park. 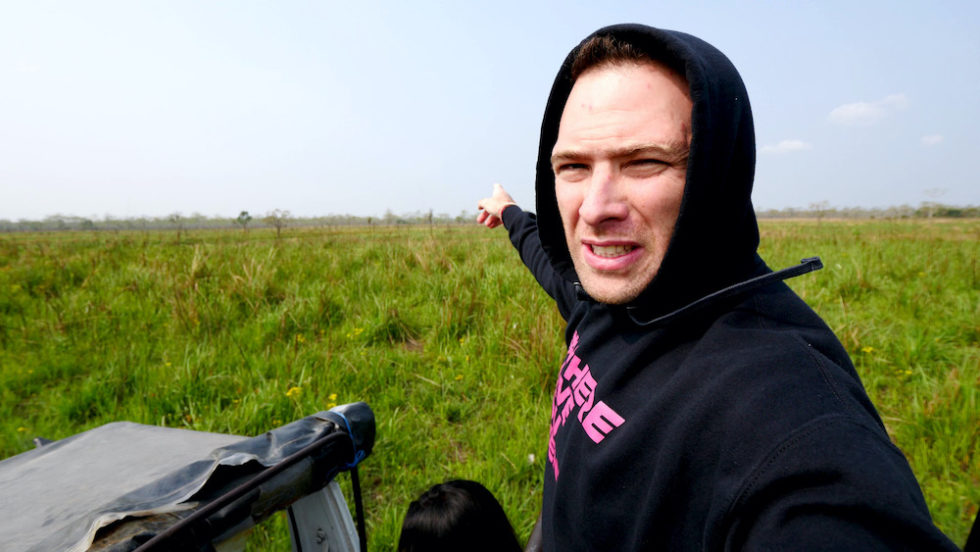 If you have the time, I recommend staying in the park overnight for multiple days so you can have a proper experience. I didn’t do that because I had limited days in Guwahati but coming out to Manas National Park is a must when you visit Assam.

After a 30-minute drive, we arrived at a two-story lookout tower where we could view the surrounding area. We saw a few peacocks who were making mating calls, so maybe it was their mating season! 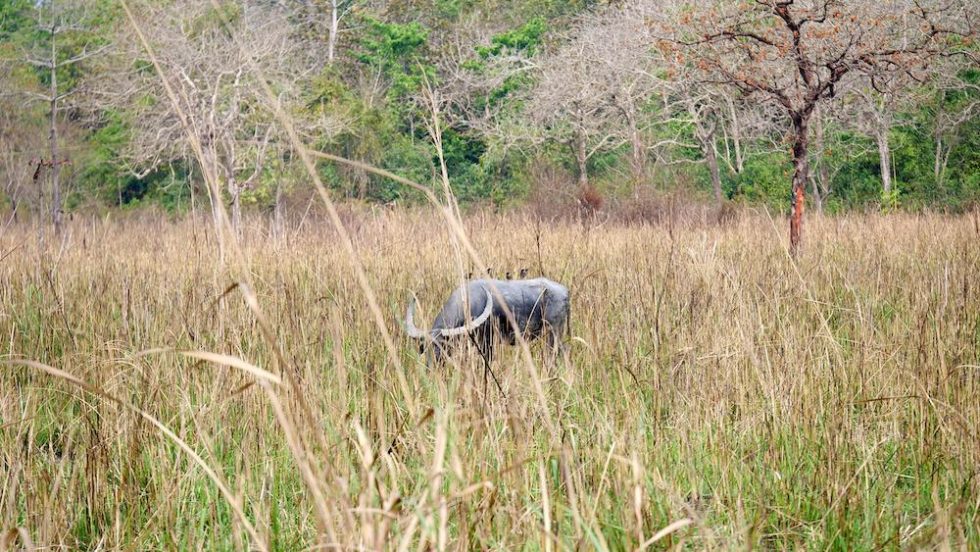 There are lots of other animals in the park, including endangered animals. The trick to enjoying a safari is being patient. There’s no guarantee that you’re going to see any animals. It’s luck of the draw. But if you’re patient and spend enough time there, chances are you’ll see something.

We spotted some water buffalo and a gorgeous blue peacock. This water buffalo had huge horns and was pretty far away from us. We also saw a deer through the haze. Then we saw our first elephant, possibly a mother with its calf. 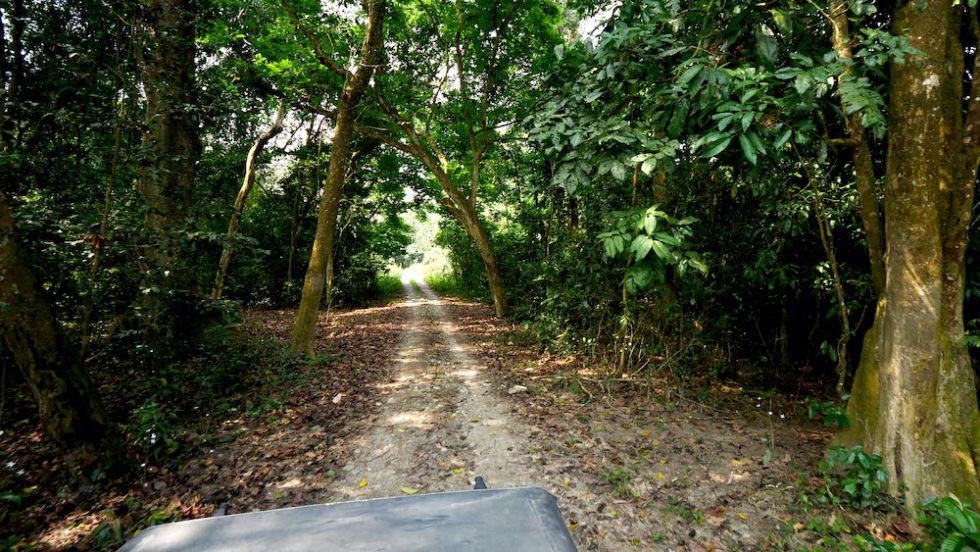 I climbed another nearby tower to see if I could get a better view of the animals. I could see the water buffalo and the elephants from up there, but the deer were camouflaged in the grass.

It was nice to see the animals from far away, but I really wanted to get some up-close video for you guys, so I hopped back in the Jeep and continued on with our game drive.

When you go on safari, you should use a zoom lens. I rented one from Lensrentals.com. They make renting lenses super easy and affordable! 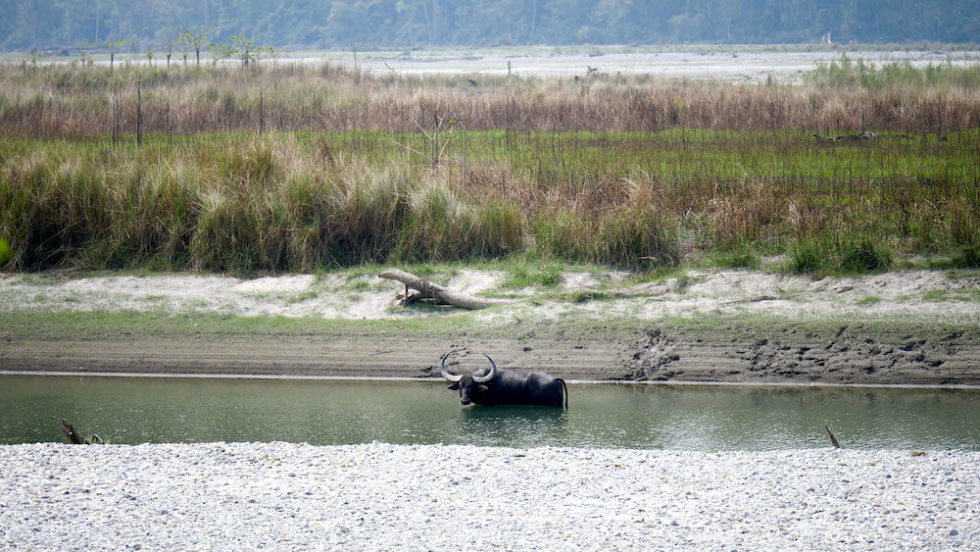 Then we got a nice look at a deer. I learned that they’re trying to create more grasslands at Manas, so they’re cutting some of the trees down to do it. We spotted another buffalo before reaching the river, which comes from Bhutan and connects to the Brahmaputra.

Our first game drive concluded there, because most of the animals are asleep during the hottest part of the day. But we’d be back for more in a few hours!

I hope you enjoyed this video of our first game drive at Manas National Park! If you did, please give it a thumbs up and leave me a comment. Also, please subscribe to my YouTube channel so you don’t miss any of my upcoming travel/food content!