I started my Kozhikode Beach Indian street food tour at the lighthouse and would make my way south along the beach. It’s a very wide beach, and there were at least 10 or 12 vendors. I was super hungry and couldn’t wait to eat! Now that it was after dark, the temperature had dropped significantly since the daytime. There was a nice breeze and it was really crowded out. I was surprised because it was a Monday. 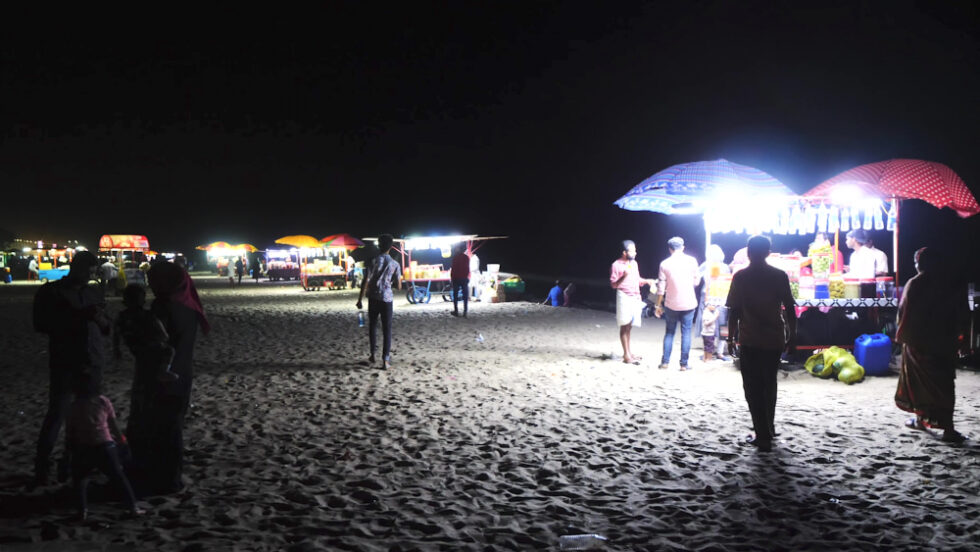 A lot of the stalls had lots of fruits. We stopped at one near the water that had lots of fruits in jars as well as sliced fruit. They also had shaved ice, which they add fruit to in order to make an icy, slushy-like drink. You can have it sweet or spicy! I went for some spice!  It was like a spicy veg slushy, but it was also salty and sour. The ice in it gave me brain freeze! It wasn’t really my thing, though, so I didn’t really love it. It costed 20 rupees/$0.27 USD per glass and we got three, so it was 60 rupees/$0.80 USD.

Check out the 10 Things You Must Do and Eat in Kochi, Kerala, India

Then, we headed to a stall selling quail eggs and mussels, also known as kallumakkaya. We got 10 hardboiled quail eggs in masala for 50 rupees/$0.66 USD. They were a little spicy on the outside, but not so bad. It felt like the yolks in the quail eggs were a lot bigger than those in chicken eggs. 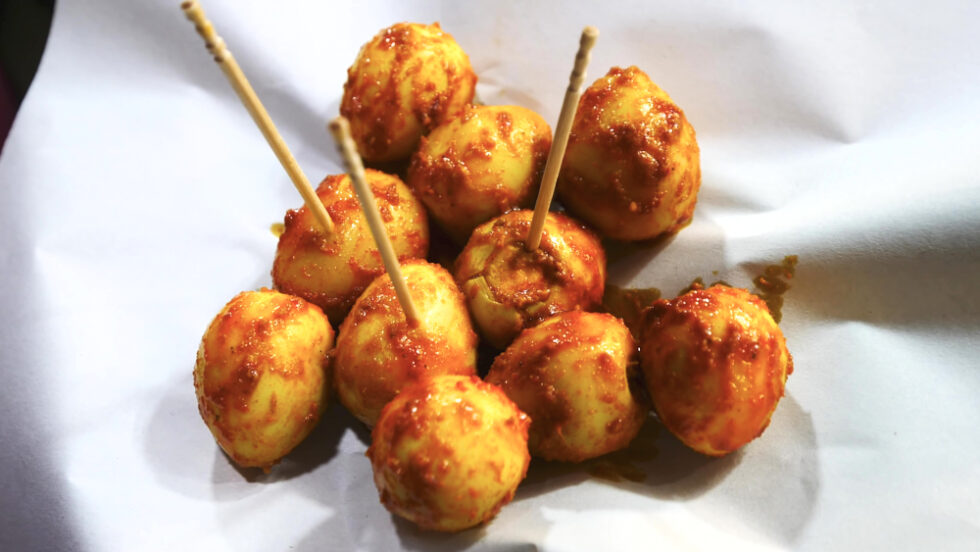 Then, we continued our Kozhikode Beach Indian street food tour further down the beach. There, we got some mussels stuffed with rice dough. They cost 10 rupees/$0.13 USD each. They’re heart-shaped and you have to pull the meat and filling out. It was like a thick mussel chip! I didn’t really taste the mussel, but I could taste the rice dough. It was actually really bland. It wasn’t anything special, but they were just OK. I got two for 20 rupees/$0.27 USD. 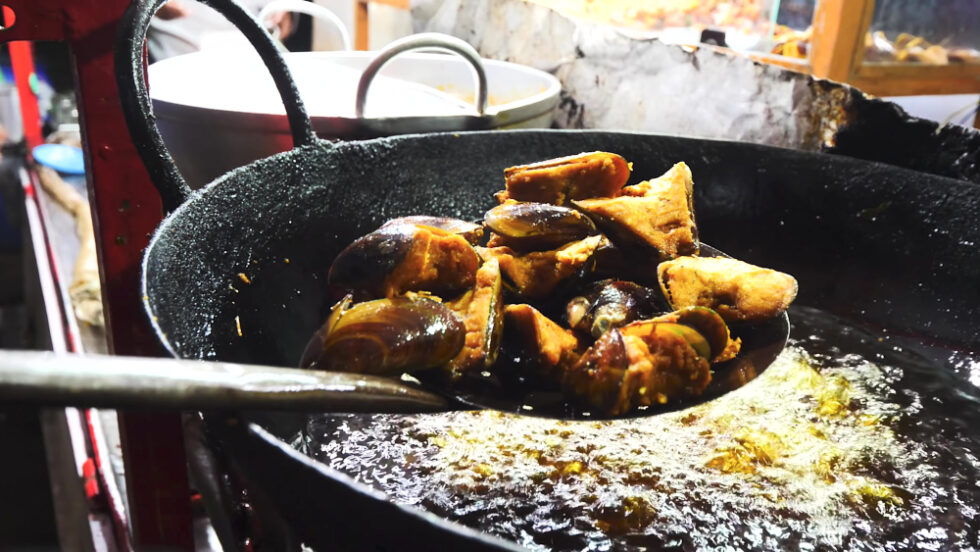 Next, we went for a green pea masala, which contained egg, green peas, onions, cabbage, and spices. You can also squeeze fresh lemon juice over it. It was like a nice green pea salad. We could both taste cumin seeds in it, which bound the flavors together. It was like a crunchy coleslaw and didn’t have too much spice in it. I liked it a lot and wish I’d eaten less mussels! It was the best thing so far! 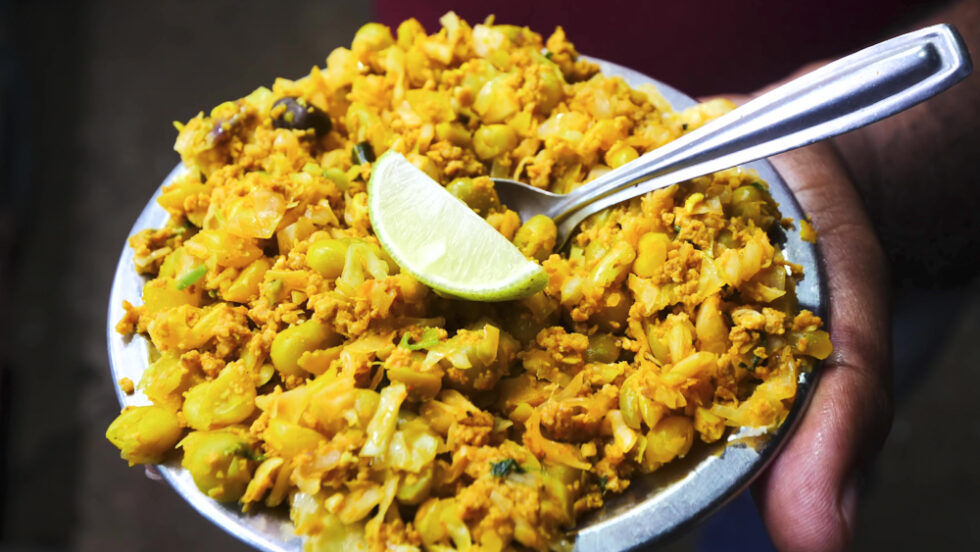 Then, we went to a stand to try some pickled chilies. Mine was dripping wet and was like a jalapeno. It was tasty and full of vinegar. It had a nice punch but wasn’t too spicy at first. Then It hit me later! I got a slice of watermelon to cool down the fire at the base of my throat. The chili and watermelon each costed 5 rupees, which is only about $0.13 USD.

I wanted something savory next. Each vendor was very similar. Some sold fruits and mussels, so we headed elsewhere to continue our Kozhikode Beach Indian street food tour. I was hoping to try some cassava biryani and falooda, which is famous here. 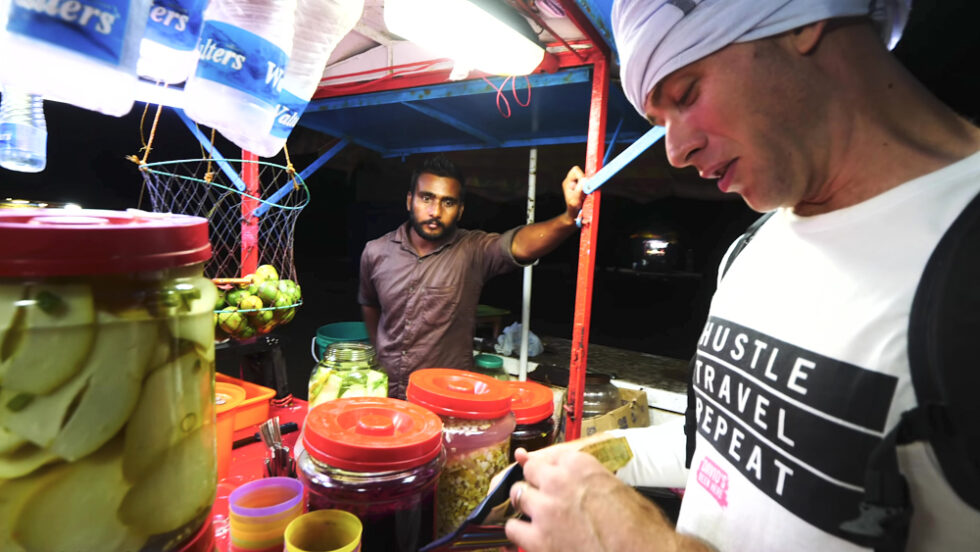 After a two-minute drive to the southernmost part of the beach to try the cassava biryani, which was going to just be cassava and beef with no rice! The restaurant was called The Shap Family Restaurant. Inside, there were posters of famous Malayalam movies on the walls. We started with a welcome drink made of passionfruit, lime, and mint. It was really minty. There were also some snacks made of cassava with curry leaf and spicy chutney on top. They were like tiny appams. They were amazing! 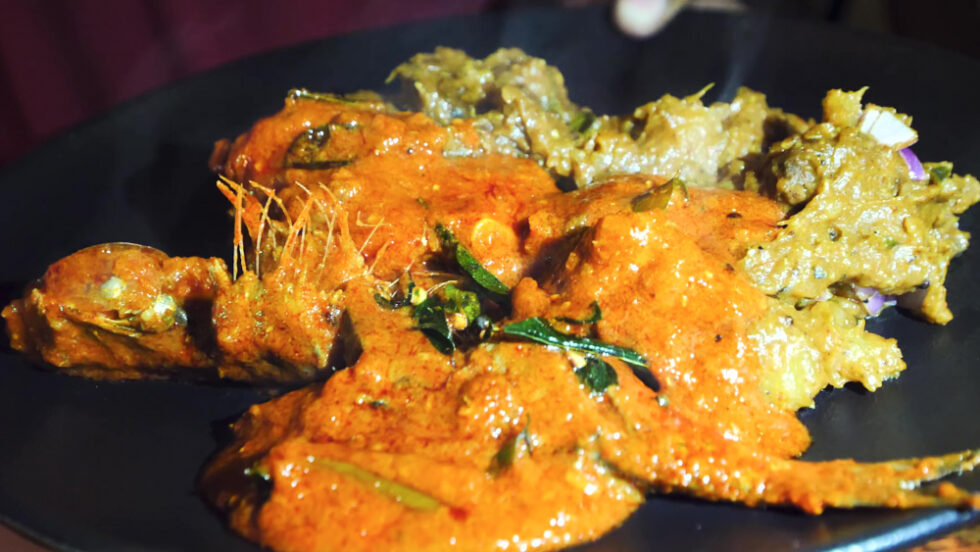 Next was the cassava biryani, which was my sixth biryani of the trip. I had them with some sardine curry. The beef in the biryani was beef ribs. It all looked so good! I mixed it all together. The beef ribs were tender and juicy and the dish wasn’t too spicy. They were also nice and fatty. I also loved the mashed cassava, which was like mashed potatoes! 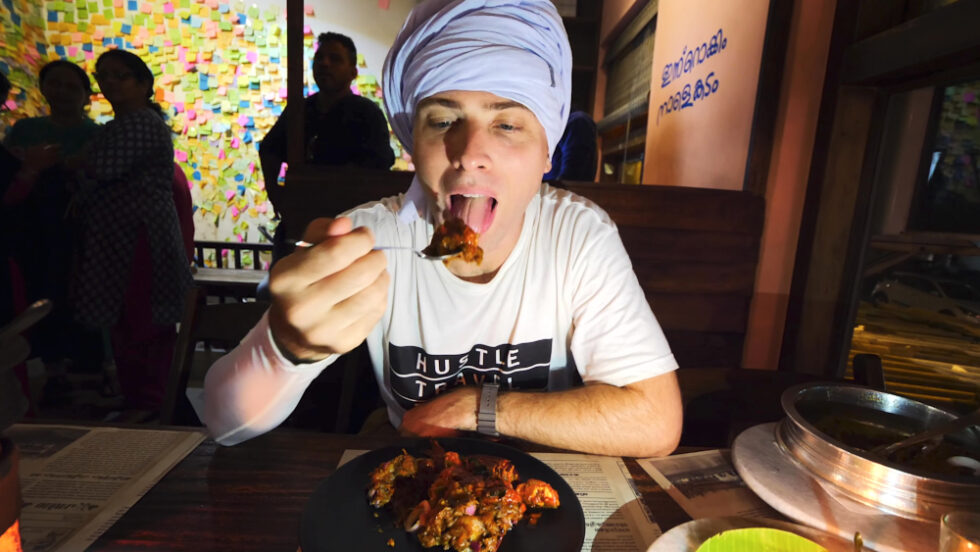 The curry from the sardines was also incredible. It was both creamy and light! I wish this had been my first dish of the night so I could eat more of it! Every piece of beef was attached to some fat, which provides more flavor! The sardines were nice and salty. It was one of the least spicy dishes I’d had in Kerala but was so good!

Next was the falooda, but it was different from other faloodas I’d had. It was served in a bowl and contained ice cream and a cone, and they said there were fruits and noodles inside. I got some nuts and the ice cream tasted like almonds. It was a mix of three different types of ice cream and semolina. I thought the other two ice creams were mint and strawberry. It was really sweet and contained little straw-like wafers. This falooda was a truly wild creation! It was the ultimate falooda but it took me some time to finish it! 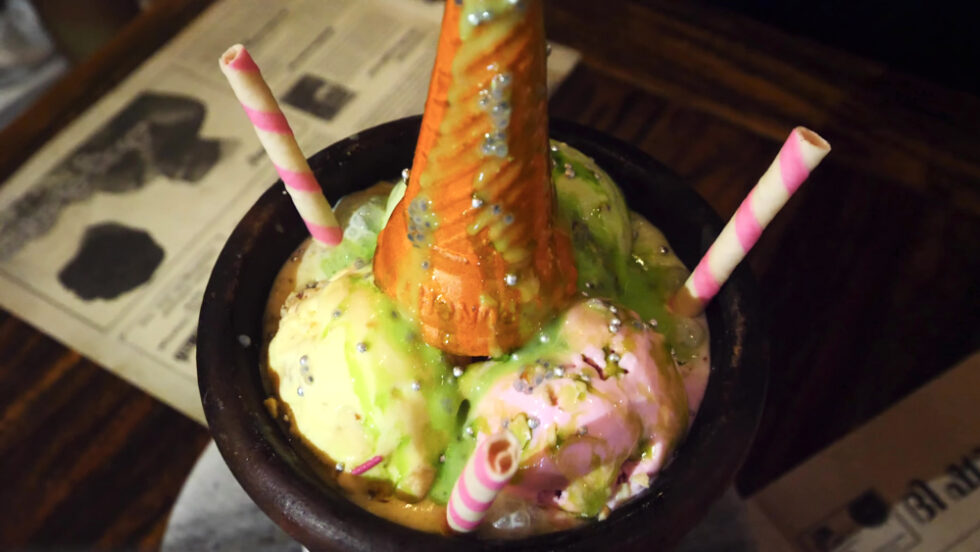 What an awesome Kozhikode Beach Indian street food tour to end my time in Kerala, India! I have to thank my boy Ebbin for taking me to Kozhikode Beach and for making this Kerala trip a dream come true! Subscribe to him on YouTube and be sure to follow him on Instagram! Also, please subscribe to my YouTube channel so you don’t miss any of my travel/food adventures around the world!