My second day in Guwahati in the state of Assam, India began bright and early with an unforgettable breakfast food tour of Fancy Bazaar. I couldn’t wait to dive into some more Indian culinary delights! But before breakfast, we headed off to a local temple to honor Shivrati, a Hindu holiday that celebrates the marriage of the god Shiva. Come along with me as I check out the temple and go on an Indian street food breakfast tour of Fancy Bazaar!

Before entering the temple, we took off our shoes, which is customary before you go inside a Hindu temple. While shoe thefts at Hindu temples are rare, I recommend traveling with a second pair just in case, especially in larger cities. 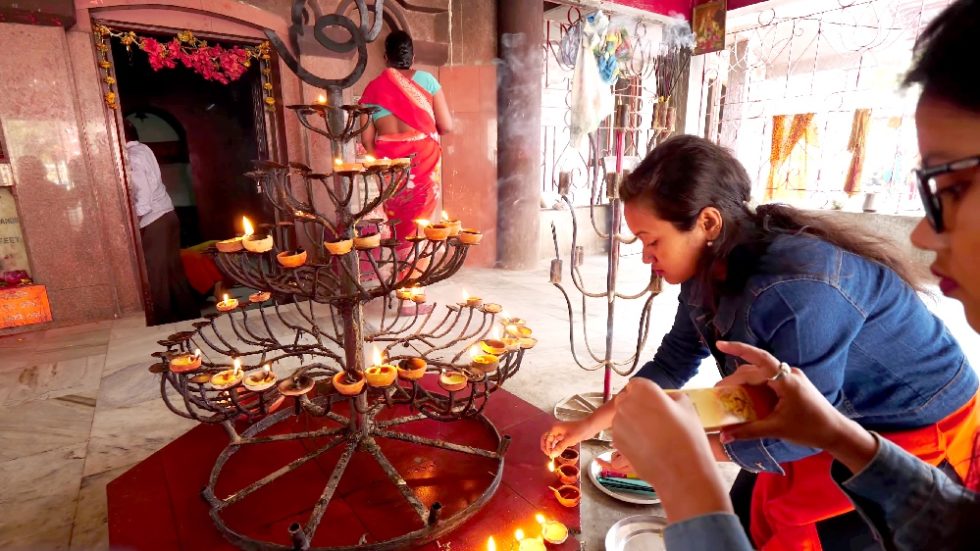 Inside the temple, we placed our offerings and were blessed. Then, we both had some red tikka put on our foreheads. 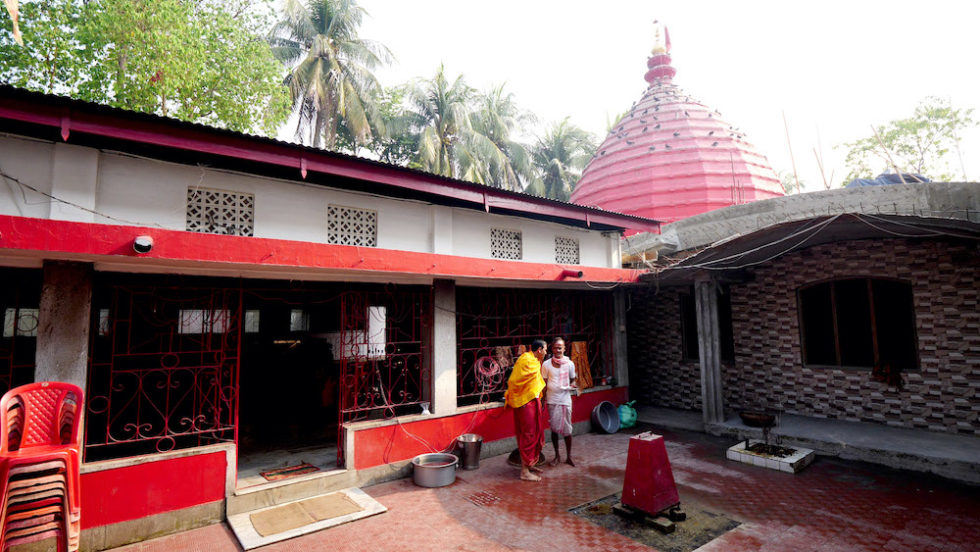 Afterward, you ring the bell three times. It’s such a beautiful and peaceful experience. I highly recommend it even if you don’t identify as Hindu. The temple is such a spiritual place and you can feel it in the air there. The temple was located just two blocks from my Airbnb, so it was easy to get to.

Between my Airbnb and the temple is a turtle sanctuary. Turtles are my favorite animals, so we swung by. There are hundreds of ducks here, who are offerings to a god. 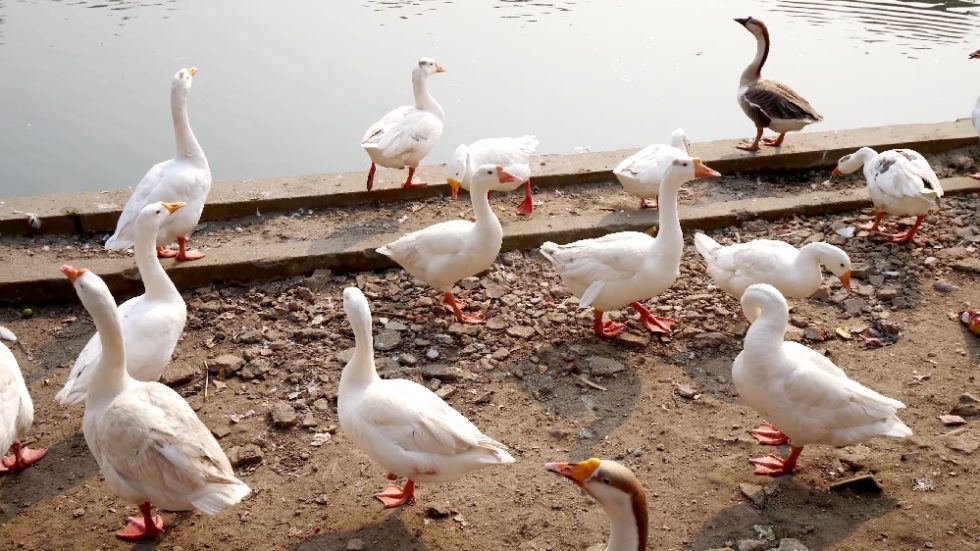 They’re all male ducks, so there are no females. Unfortunately, we didn’t see any turtles even though there are about 100 of them in the sanctuary. 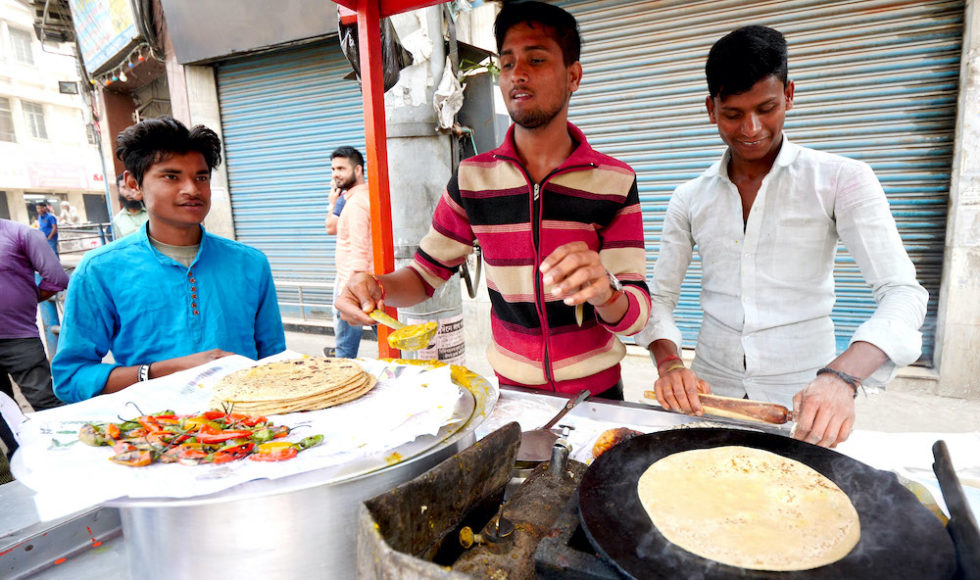 It was almost 9 in the morning, so I was starving, so we headed off to Fancy Bazaar via a rickshaw. There, we started our tour of Fancy Bazar with sweet parathas with aloo ki sabzi, which is a mashed potato curry that also contains chickpeas, tomatoes, and green chilies. 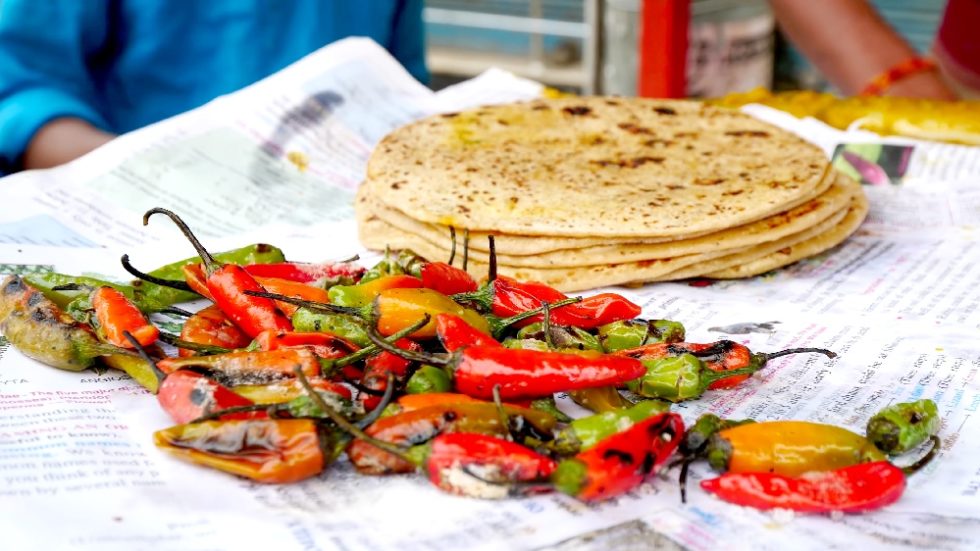 The curry was super light and has spices in it, but it’s not spicy, heat-wise. Then I tried it with the paratha, which was thin and freshly made. It wasn’t sweet, but it had a richness to it because there was a lot of ghee in it! 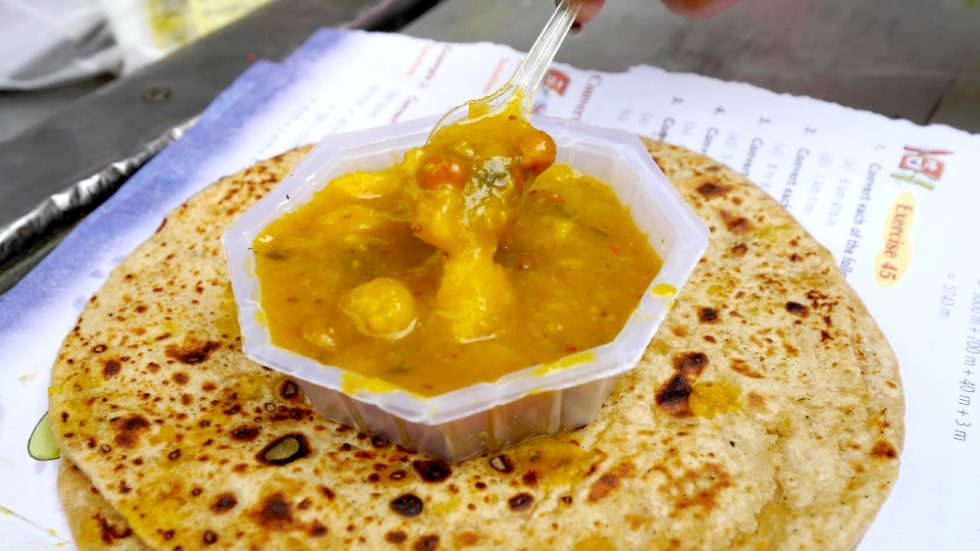 The parathas were fantastic and paired perfectly with the aloo ki sabzi. I made a little taco by wrapping some of the sabzi in a rolled-up paratha. It was so good! Best of all, it only cost 20 rupees/$0.29 U.S. for two parathas and the aloo ki sabzi! It’s practically a steal and is something you must try when you visit Fancy Bazaar! 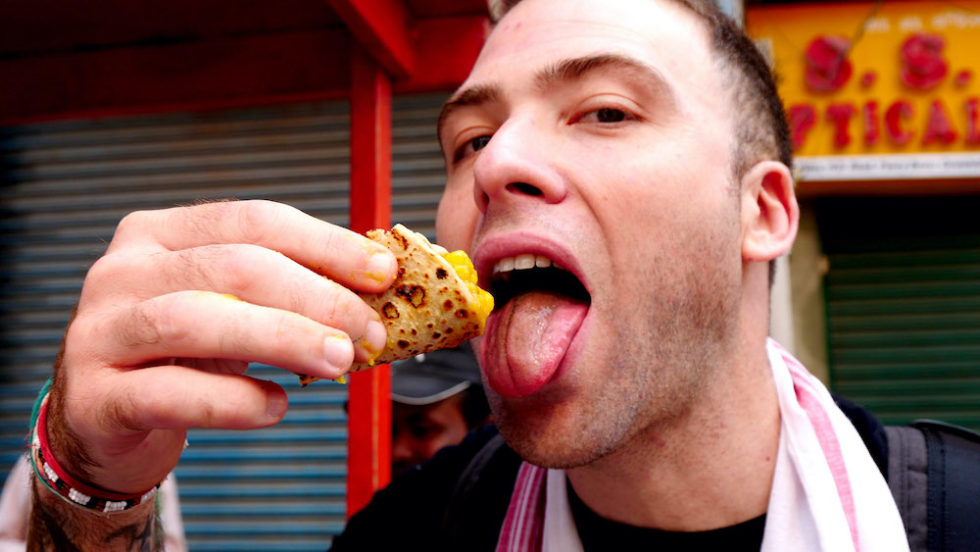 Next on our tour of Fancy Bazaar, we went for some chole bhature, which consists of a large puri that is fried in oil and is served alongside a chickpea curry and pickles. Try to tear the puri with one hand if you can, open it up, and add the chickpeas. 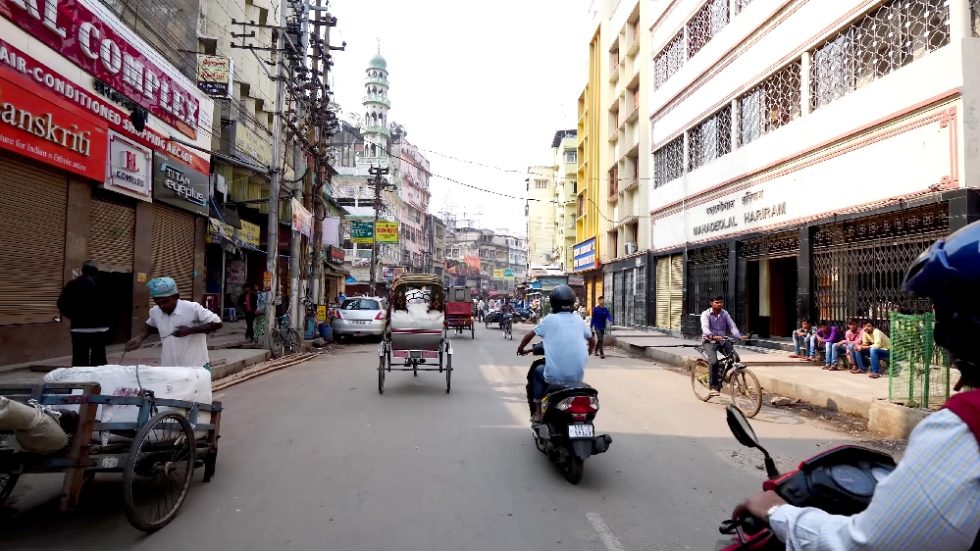 It was very nice and a little spicy! The chole bhature was a lot better with the pickle and the onions calmed down the heat. And at only 30 rupees/$0.43 U.S., it’s a really cheap and filling snack!

It seemed like I was the only foreigner in Guwahati; lots of locals wanted to see what I was doing and wanted selfies with me! I love my Indian fans! 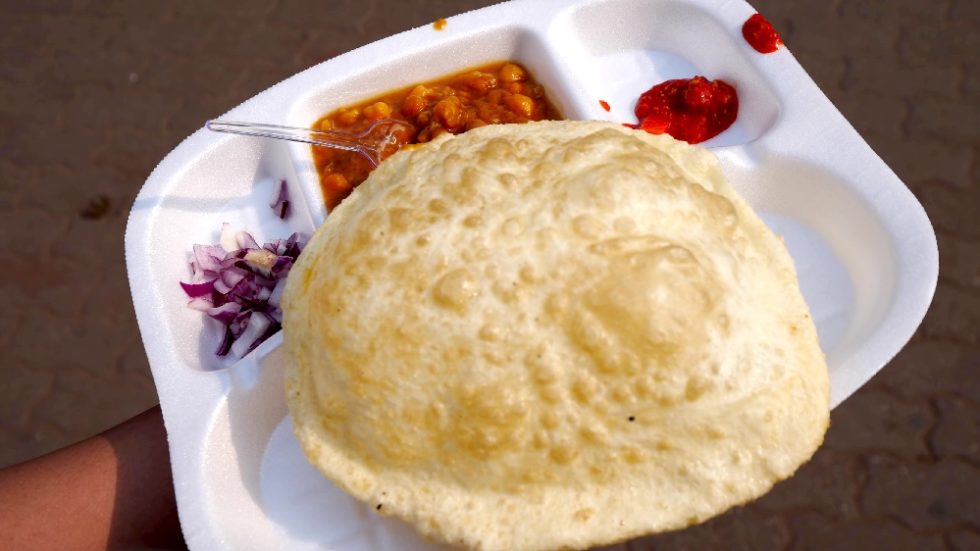 This area, Fancy Bazaar, reminded me of Chandni Chowk in Delhi, except it wasn’t nearly as crowded. There were lots of vendors selling clothing, vegetables, and much more. This area is the business capital of Guwahati. You can get anything here! 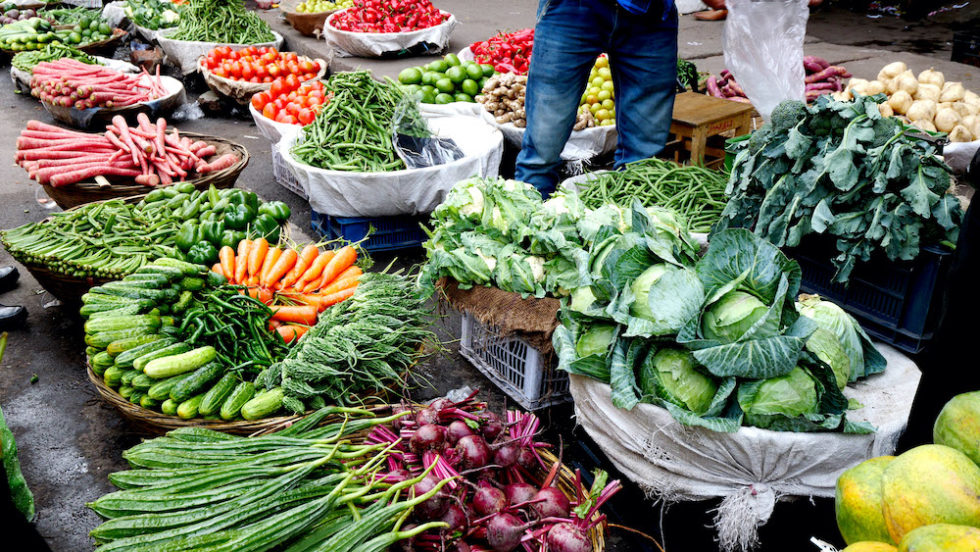 Next, we went to get some lassi with rose, sugar syrup, and almonds. Lassi is a milky, creamy, yogurt-based drink that is extremely popular in India. It had a different flavor from other lassis I’d had before, but I loved it! It wasn’t as thick as other lassis I’d had, especially the super thick one I had in Amritsar last year but was still creamy. They cost 50 rupees/$0.72 U.S. each. 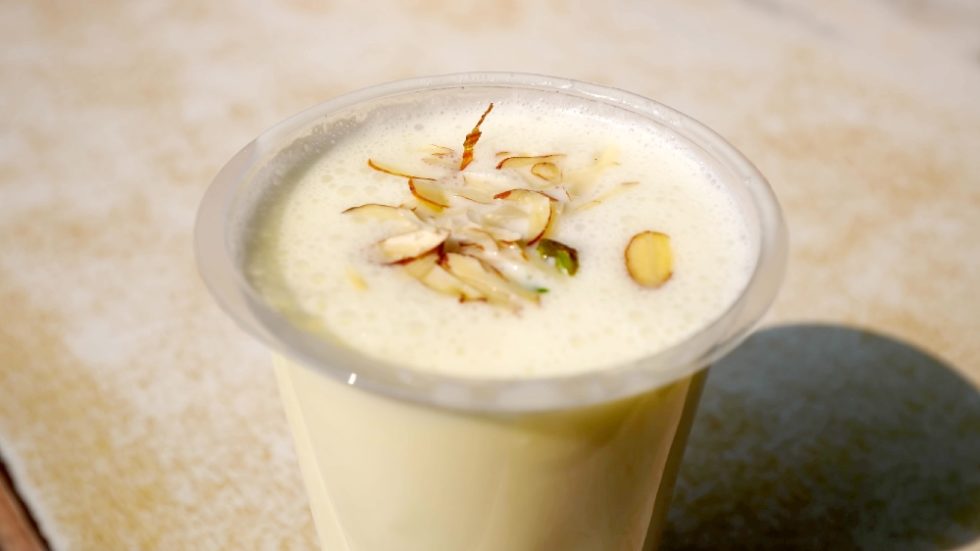 From there, our tour of Fancy Bazaar continued with some puri sabzi, which consists of 4 deep-fried puris and a hot, green pea curry with chilies for 30 rupees/$0.43 U.S. 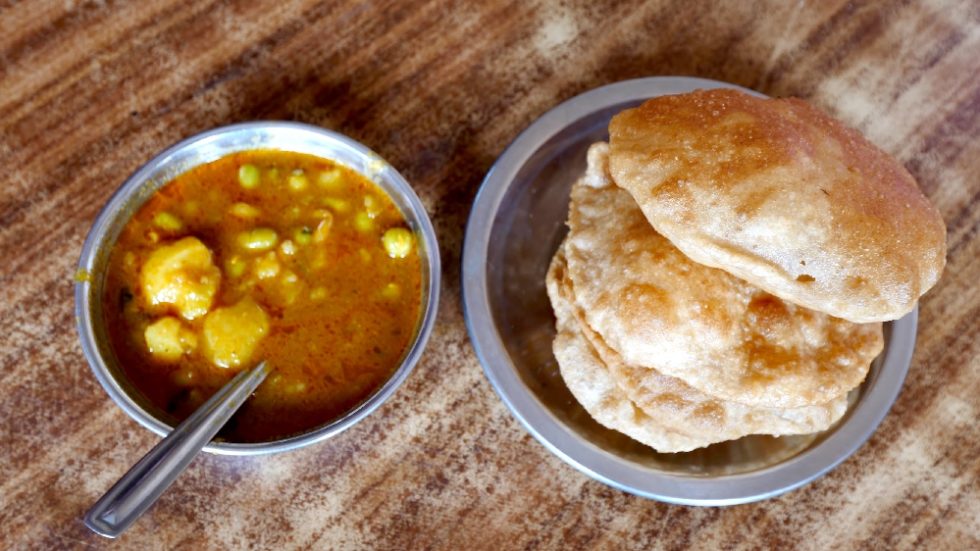 The puris were really hot, crispy, and airy. I stuffed one with the sabzi. It wasn’t spicy but was kind of oily. It contained nice, big chunks of potatoes and the peas were really nice. The sauce was also very rich in flavor!

We ended our breakfast street food tour with rasgulla (a sweet and fluffy dough ball from Kolkata that is soaked in sugar syrup) and gulab jamun (a milk-based ball with sugar syrup and nuts). I’ve had both before and they’re both intensely sweet. 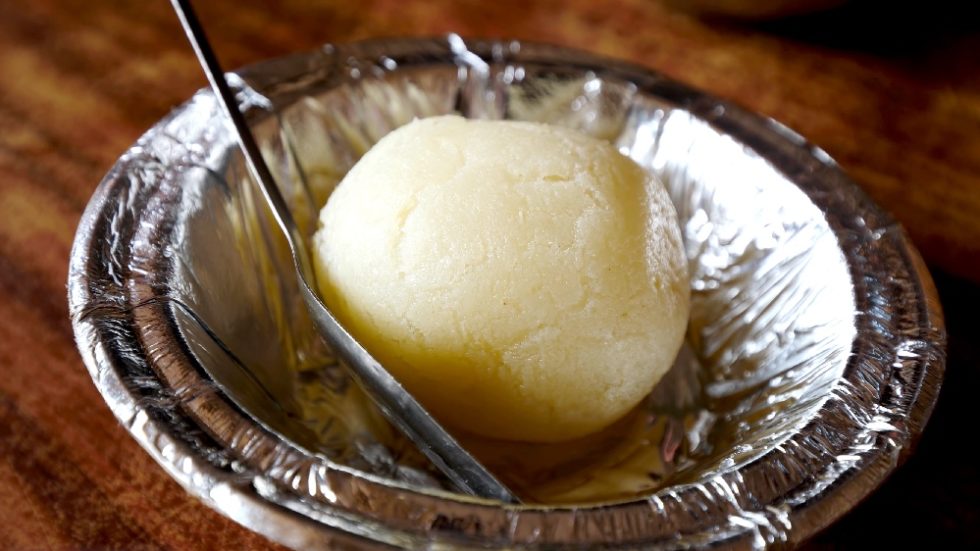 The rasgulla is chewy and sweet and the gulab jamun is even sweeter! Trying them both together is a massive sugar rush! 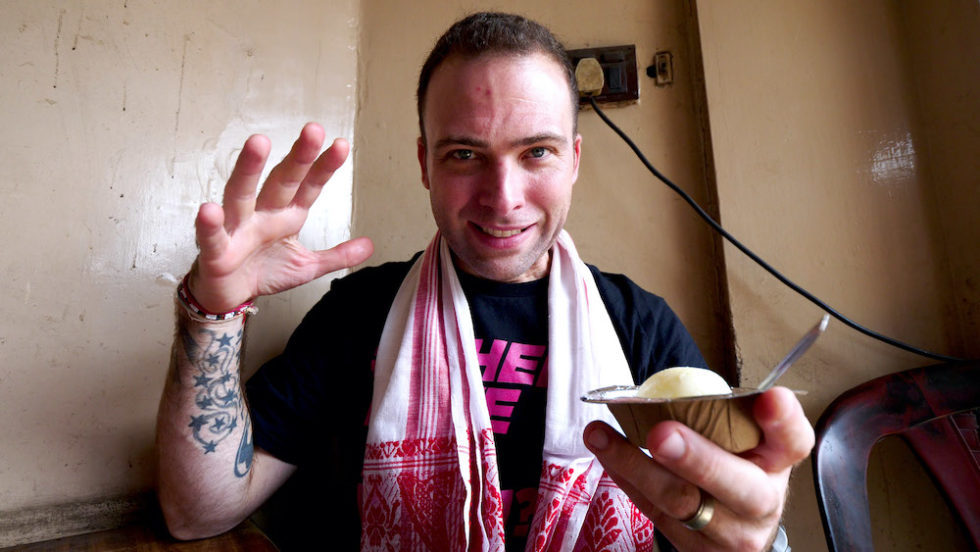 And that’s it! I hope you enjoyed coming along on my northern Indian breakfast food tour of Fancy Bazaar in Guwahati! If you did, please give it a thumbs up and leave me a comment. Also, please subscribe to my YouTube channel so you don’t miss any of my upcoming content. I’ll see you in the next travel/food adventure!