Located just 122 miles from the shores of the Black Sea, in the basalt- and clay-rich lands of the Shirak Province of Armenia, is the city of Gyumri. This city, the second-largest in the country, is known as the capital of humor, arts, and crafts in Armenia. From the moment I arrived there in early October of 2019, it was apparent to me that art and creativity play a major part of the local culture. That art and zest for personal expression make the things to see and do in Gyumri, Armenia some of the most beautiful and personal you’ll find in the country. 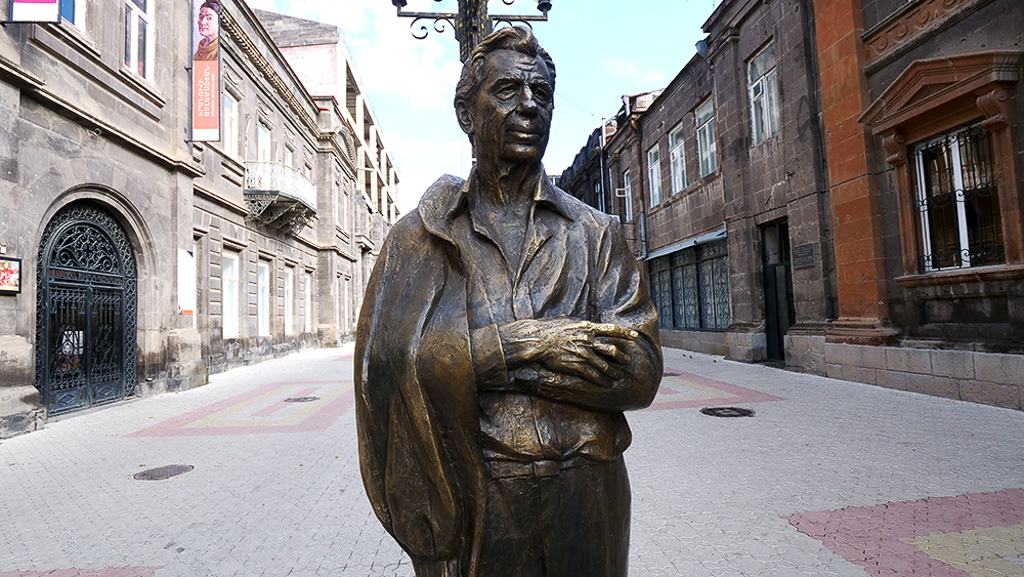 The location of present-day Gyumri was known as Kumayri from antiquity until 1837, when its name changed to Alexandropol by Russian Tsar Nicholas I. That name stuck until 1924, when the city was renamed again, this time in honor of Soviet leader Vladimir Lenin. The city, then called Leninakan, reverted back to Kumayri in 1990, just before the fall of the Soviet Union. Two years later, the most recent name change occurred, and the city officially became known as Gyumri. 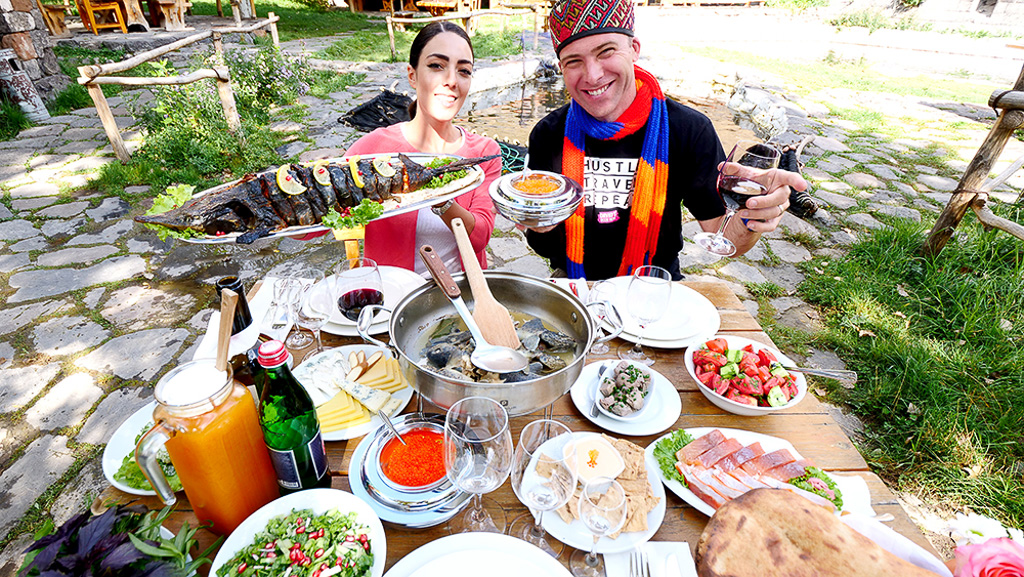 I spent much of my tenth and final day in Armenia exploring this beautiful gem of a city with my incredible guide, Lusine. It was a chilly day, and I learned that outside of summer, it’s always cool there, even if the rest of the country is warm. But even though it was a colder day, the warmth I felt from its people more than made up for it. You can feel their heart and soul in the art they create, and diving into it was one of my favorite experiences in the country. These are the top 5 things to see and do in Gyumri, Armenia.

Get a Shave at the Oldest Barber Shop in Armenia 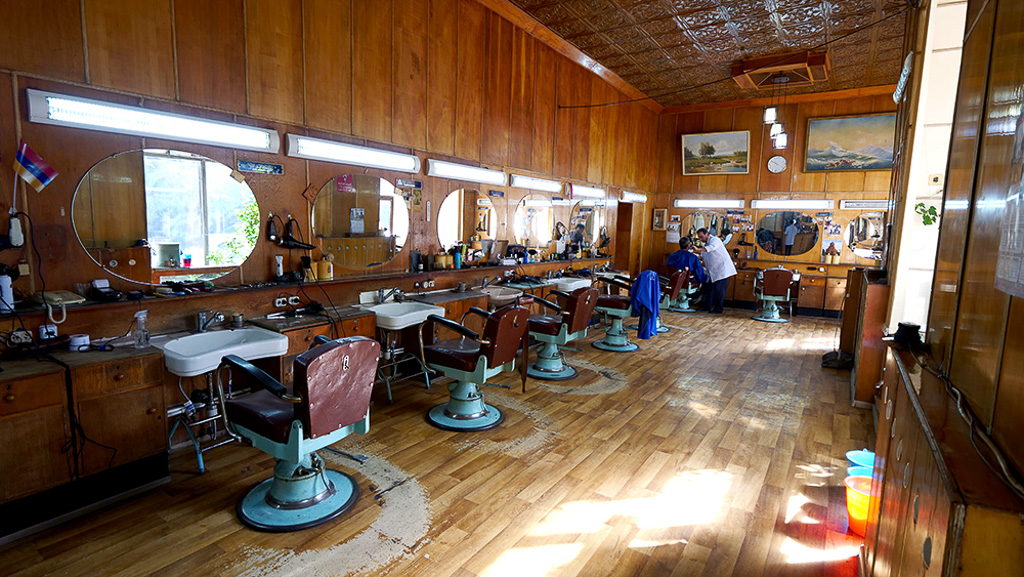 With only a matter of hours to see as much of Gyumri as I could, I hit the ground running with an immediate dive into the city’s culture and history. For me, that meant visiting Luxe Barbershop, the oldest barbershop in Armenia. I had been growing my hair out for about three weeks, and it had been nearly two weeks since my last shave, so I was looking forward to having a fresher, cleaner look! 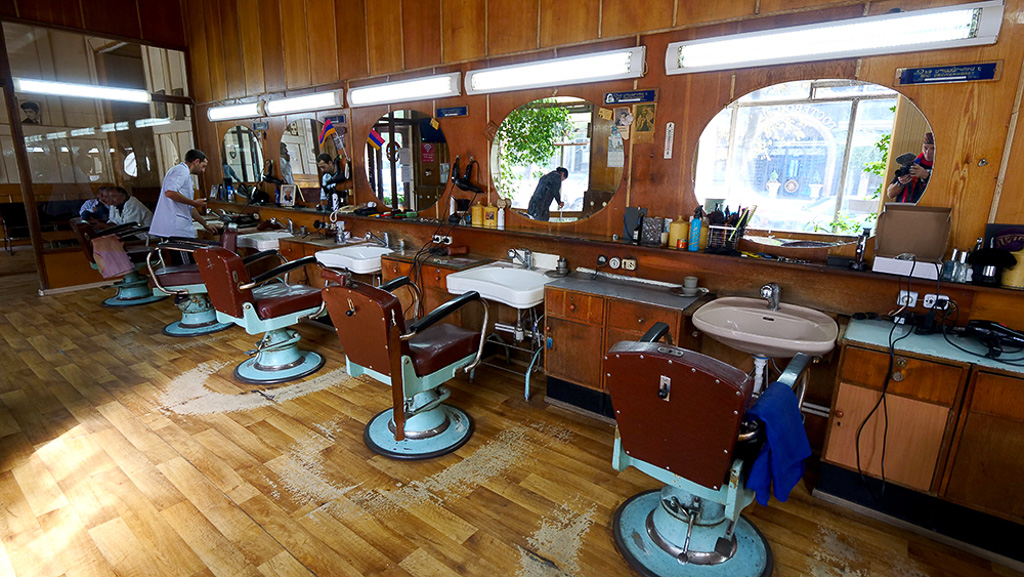 Luxe Barbershop was established back in 1939. It’s a warm, cozy, and comfortable shop, run by friendly barbers with extra-firm handshakes! They’re also very experienced and exceptional at what they do. For just 1,000 Armenian dram, or roughly $2.09 USD, you’ll get to experience it first-hand. 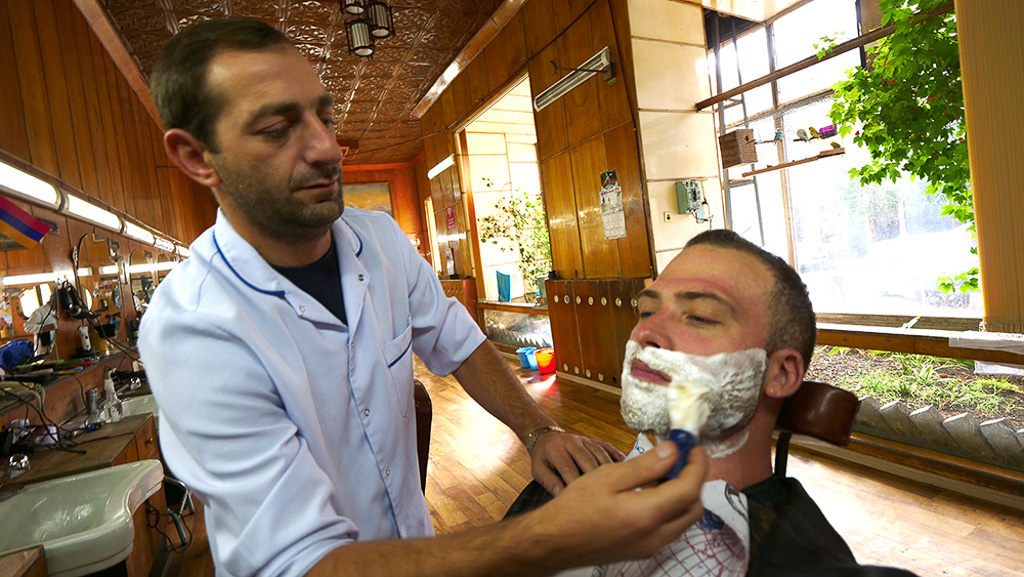 I’ve always found getting shaves at barber shops a relaxing experience, but these guys were next level. After giving me a quick clean-up in the back, my barber started on my beard. It felt like I was getting a massage and was so soothing, I nearly went to sleep! 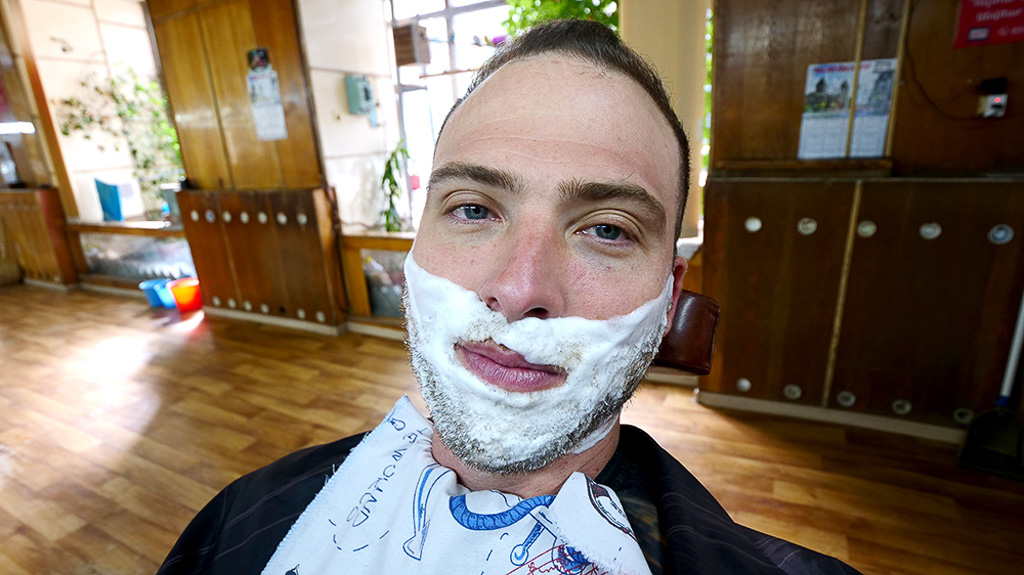 They finished up by rubbing my face with alcohol, and just like that, my Armenian barbershop experience was over. My barber had done such a good job, and without the facial hair, I looked about ten years younger! I looked and felt like a completely different person! If you’re a man in need of a shave or a haircut during your travels, getting one at Luxe Barbershop is easily one of the best things to see and do in Gyumri, Armenia! 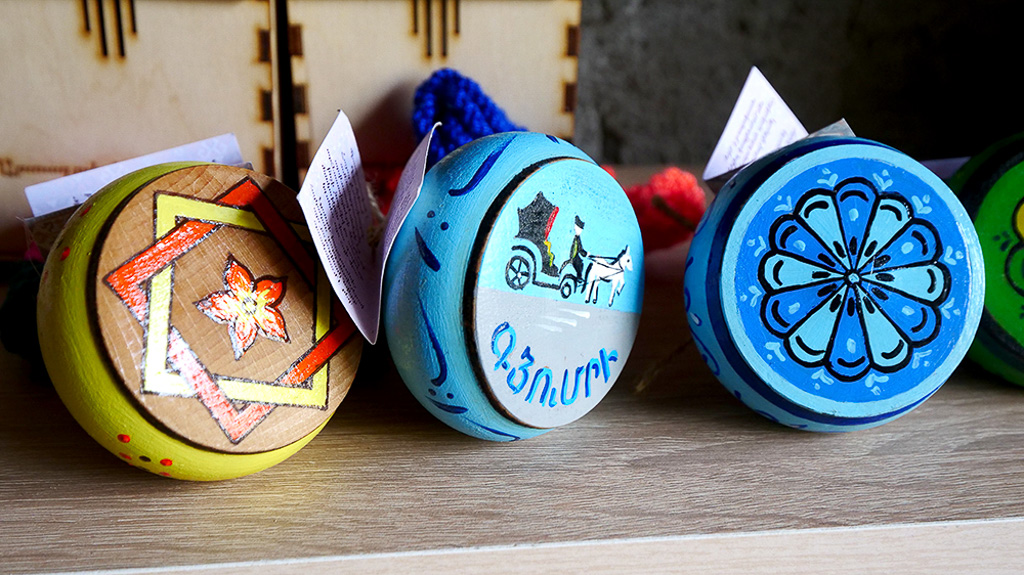 One of Gyumri’s most unique attractions is a clay workshop that will soon become a bottle cap museum. The workshop also produces traditional Armenian spinning tops in a variety of bright and beautiful colors. During my time in the country, I witnessed people playing games with these whirling toys on several occasions. The game involves the players flinging their tops to the ground as they attempt to hit their opponent’s spinning top. 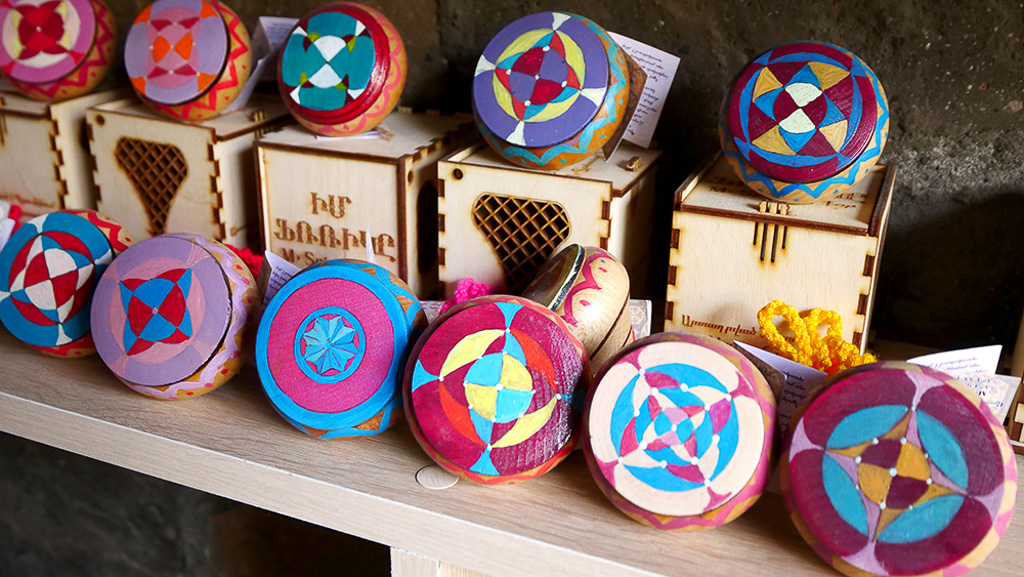 The tops sold there make a unique cultural souvenir and are inexpensive as well. You can buy one there for as low as 2,000 Armenian dram, or about $4.18 USD. They go up to 3,500 dram, or roughly $7.32 USD. These traditional spinning tops had begun falling out of favor with kids, and this shop aims to bring them back. 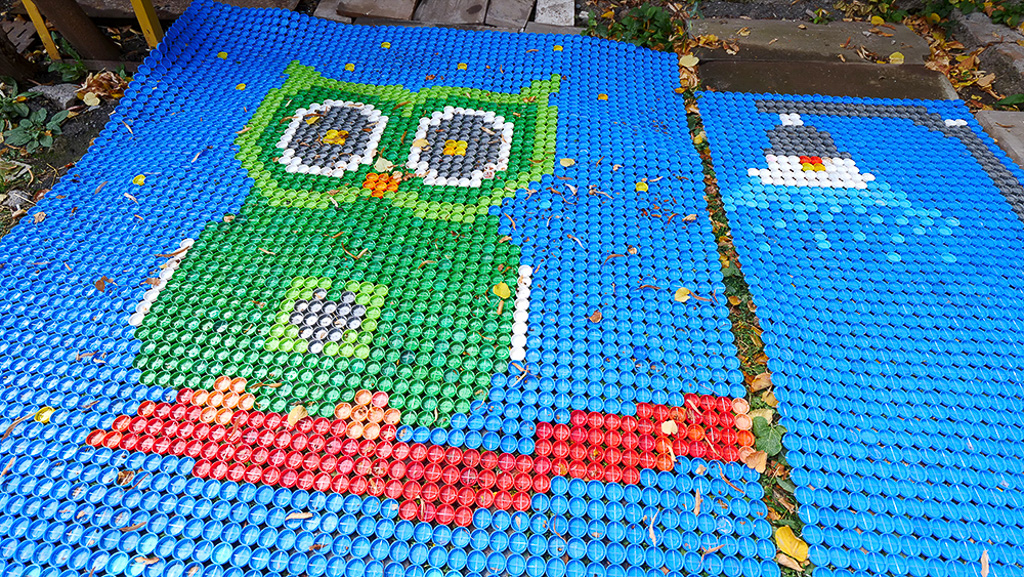 But the most unique creations here are the items that will soon be on display when this workshop converts to a bottle cap museum. Run by Gyumri native Arsen Vardanyan, this workshop recycles plastic bottle caps from around the country by crafting them into some of the coolest murals I’ve ever soon. Some of them have even adorned the sides of buildings! 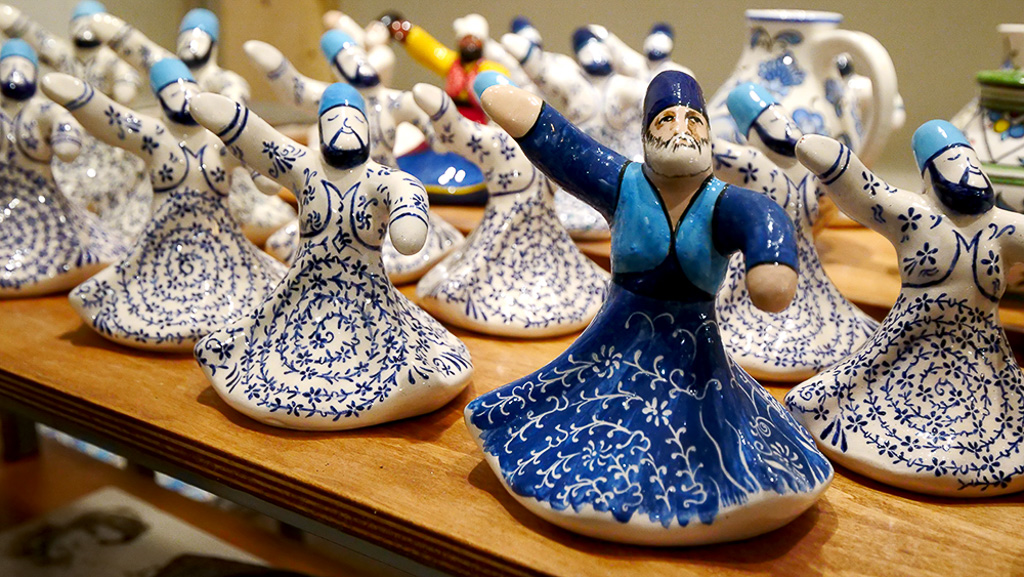 No trip to Gyumri is complete without touring its traditional workshops. In a city that prides itself on arts and crafts, they’re the best places to get a feel for what the city and people are all about. No list of the best things to see and do in Gyumri, Armenia is complete without mentioning these bastions of creativity! 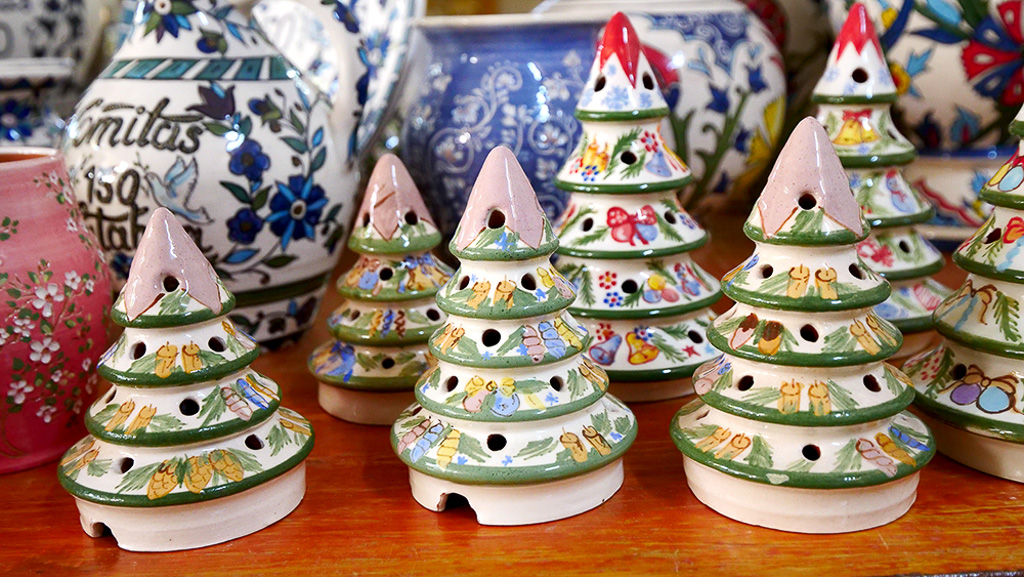 As Gyumri is Armenia’s arts and crafts capital, it should come as no shock that there are dozens of workshops in the city. The clay found in the soil in this part of northwestern Armenia proved to be quite important, as it’s prominently used in many of the crafts. In one such workshop, run by Vasgen Gevorgyan, you can see hundreds of stunning clay cups, plates, vases, wine jugs, decorative figurines, and more, around the shop. They’re beautifully painted and accented with symbols of the country, like pomegranates, grapes, and flowers! 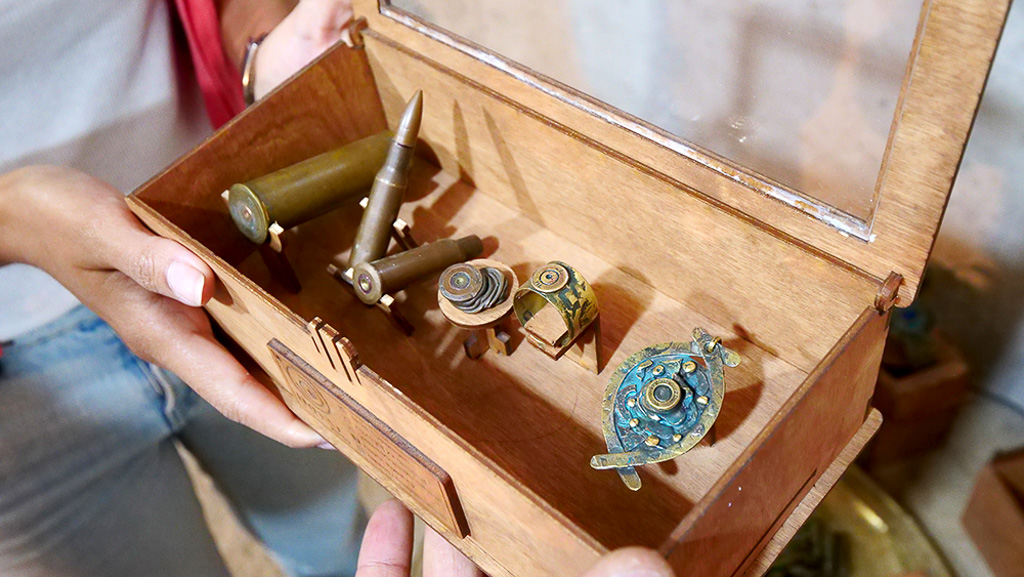 One of my favorite workshops in the city is one that recycles bullets to make stunning jewelry. Here, Armenian jeweler Artak Tadevosyan aims to make art, not war. He meticulously molds sniper bullets, tank artillery shells, and other forms of ammunition, into rings, necklaces, bracelets, and earrings. Watching him use his handmade tools to make his creations was a true pleasure. 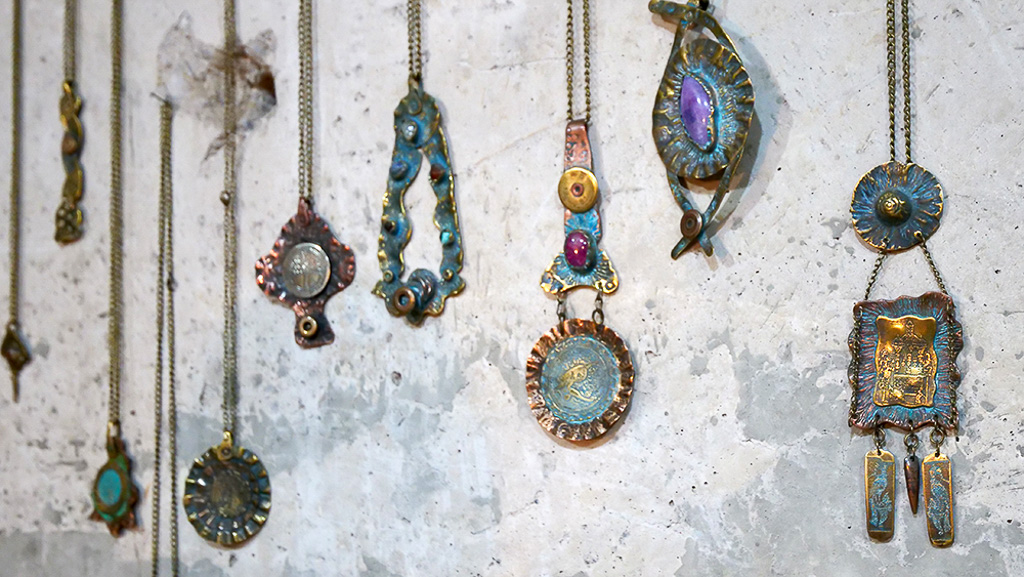 As I watched him mold a 12-caliber bullet into a flower shape, I couldn’t help but admire how he managed to turn something so violent into a gorgeous piece of art. By the time he adds ancient petroglyphs and semiprecious stones, you’d never know his creations were once objects made for a completely different purpose. I promise, you’ve never seen anything like this before! Hands down, visiting Mr. Tadevosyan’s workshop is one of the best things to see and do in Gyumri, Armenia. 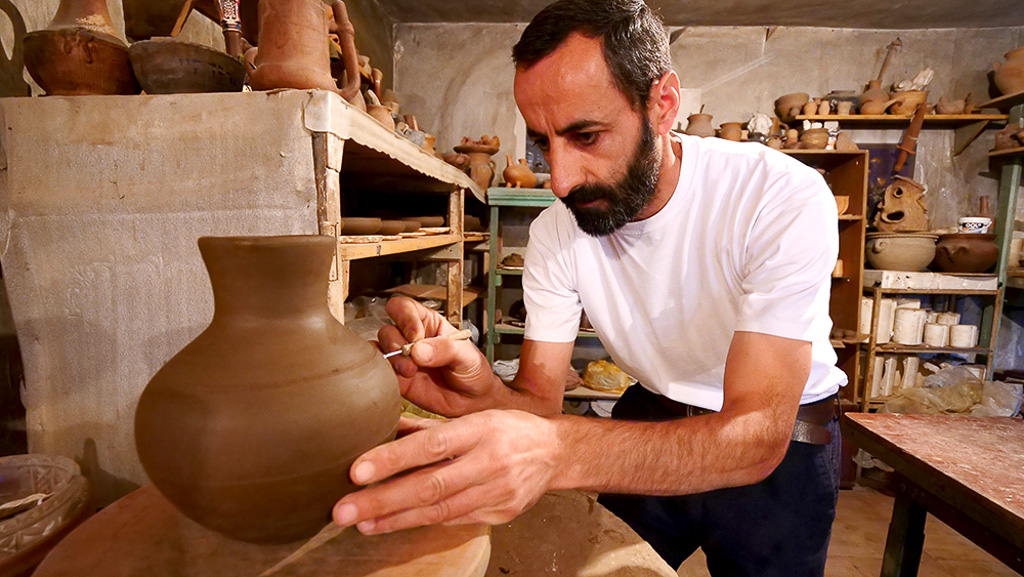 The final workshop I visited in Gyumri is a pottery workshop that was once a garage. As soon as you enter, you’ll see lots of pots, vases, cups, and plates arranged on lots of shelves. The pottery created here then goes to cafés and restaurants around Armenia, including Tava, one of my favorite restaurants in Dilijan. 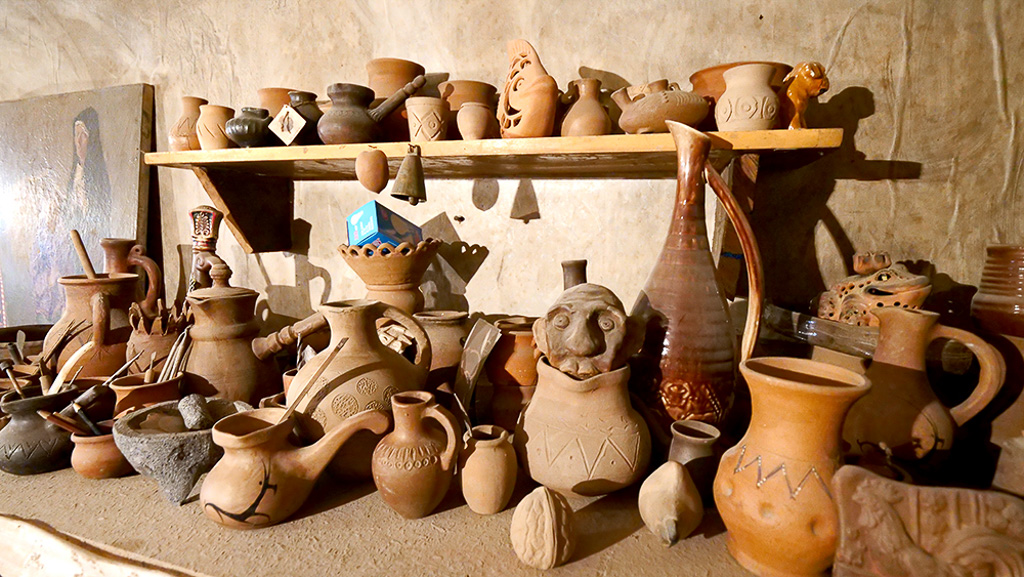 Much of the pottery on display has no markings, colorings, or designs on it, yet it still manages to be beautiful. Other creations have petroglyphs and an ornament representing earth, water, and air on them. If you’re lucky, you’ll get to watch the craftsman carve the triangular symbols into a work-in-progress before he bakes it in his 1,000-degree oven! 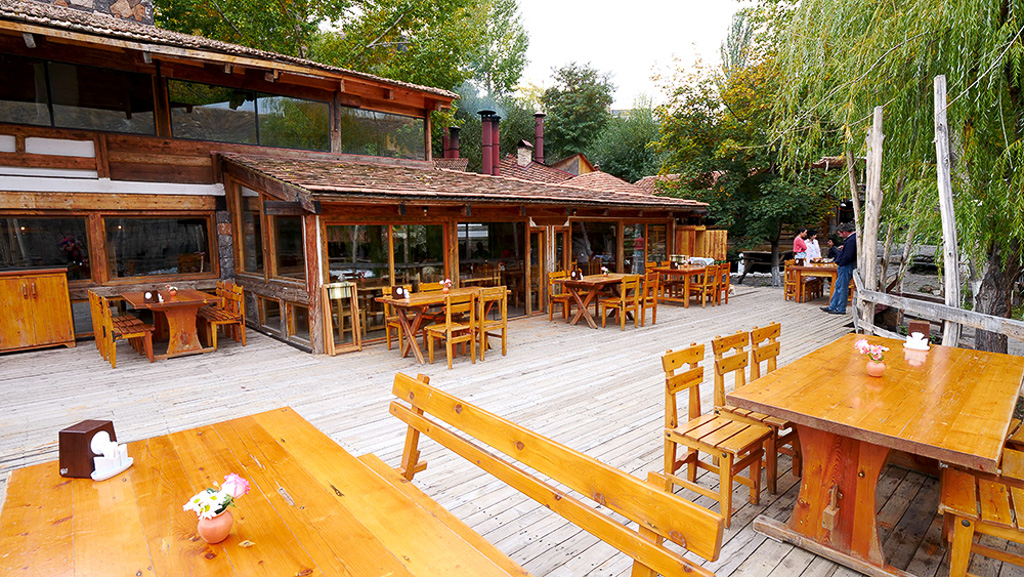 Roughly 8 minutes outside the city is Gyumri’s Fish Restaurant, also known as Cherkezi Dzor. Of all the things to see and do in Gyumri, Armenia, this is one you should not skip under any circumstance. The restaurant is located on a fish farm that both breeds and exports various species of fish. There, you’ll find lots of tasty varieties including sturgeon and blue and white trout. The cool thing about this restaurant—besides its mouthwatering food—is that you can actually catch your own meal at one of the many ponds scattered around the farm. I caught a huge sturgeon there that wound up being part of my favorite meal of my trip! 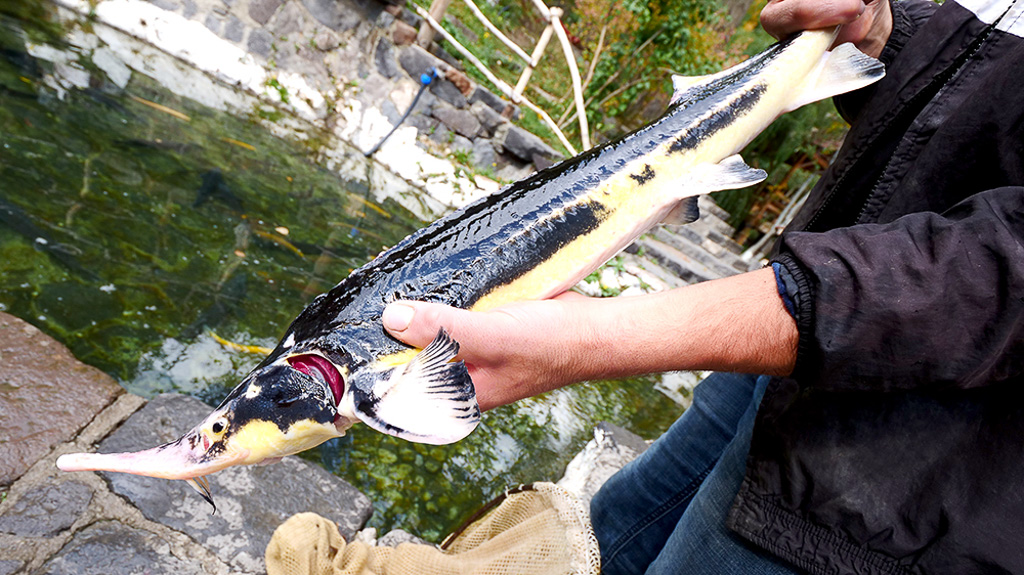 Cherkezi Dzor is one of Gyumri’s most popular restaurants and is known for its high-quality, organic fare, especially its caviar. Its fish is so tasty that some Russians have been known to fly to Armenia just to have some! The restaurant has a very homey atmosphere and is quite beautiful. If the weather permits, I highly recommend dining al fresco. It’s one of the best things to see and do in Gyumri! 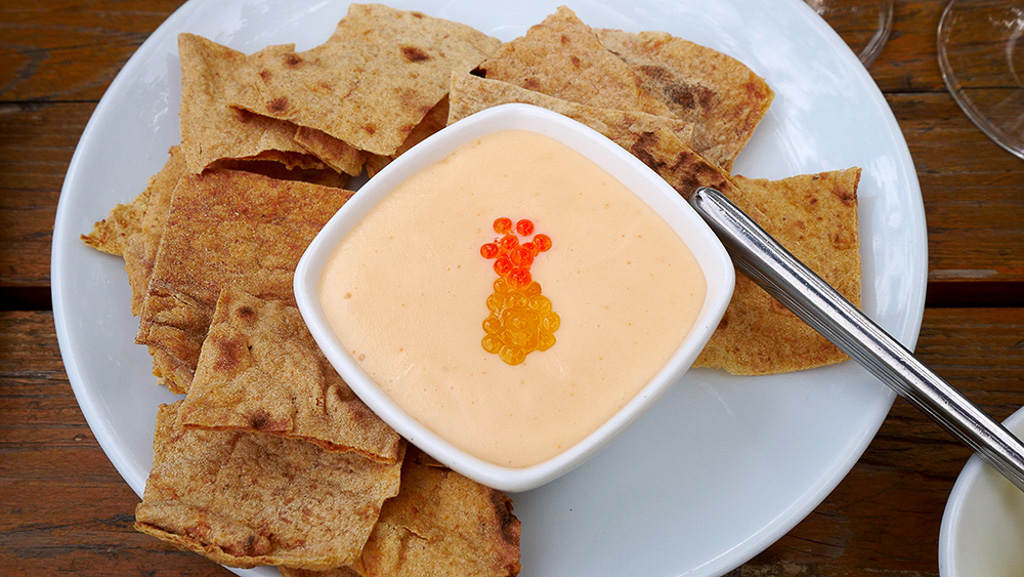 Throughout my trip, I found myself constantly in awe of the freshness and vibrant flavors of Armenian cuisine. It always manages to be remarkably tasty even without the use of many spices. The food at Cherkezi Dzor was no exception. I certainly understand why eating there is one of the top things to do in Gyumri, Armenia! 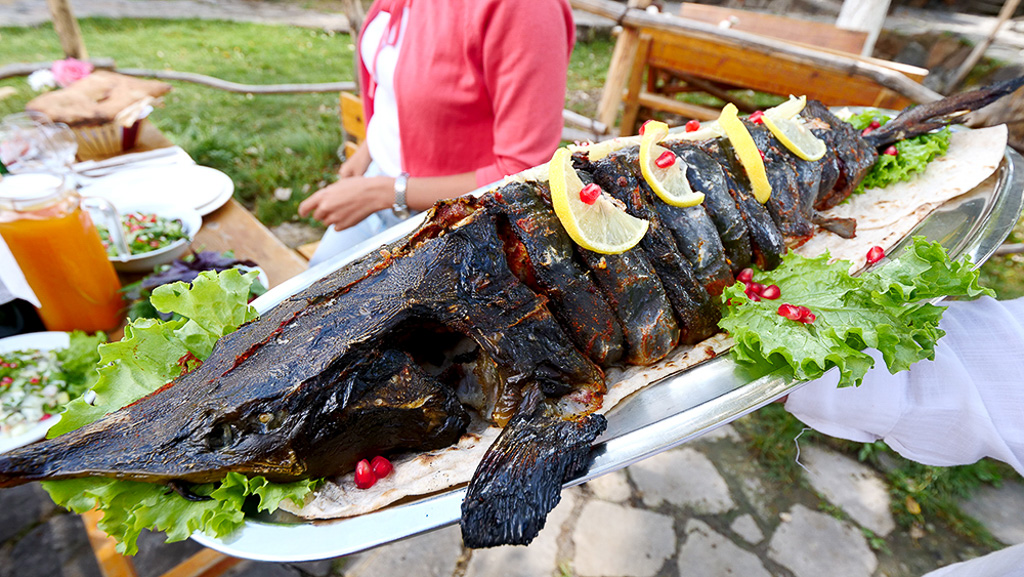 As an appetizer, I suggest starting with the crunchy dried lavash with caviar sauce. The sturgeon, which the cooks had baked in a tonir, was out of this world. I also highly recommend the barbecued trout and wine. And I must say, Cherkezi Dzor has earned its reputation for caviar, as it was absolutely divine. They were like briny little gushers that exploded in my mouth! Don’t miss out on the trout liver, either! 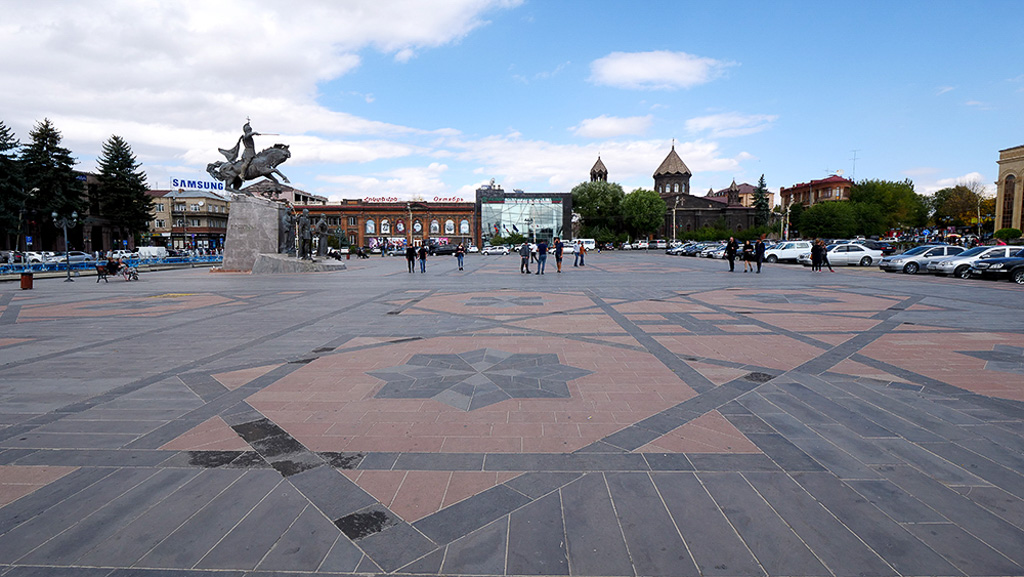 In the center of Gyumri is the main town square and the heart of the city, Vardanants Square. This rectangular square, which dates back to the 1930s, contains a mix of Russian, Armenian, and neoclassical architectural styles. It is home to several fountains and a monument to the Battle of Avarayr. This was one of the first battles that defended the Christian faith. 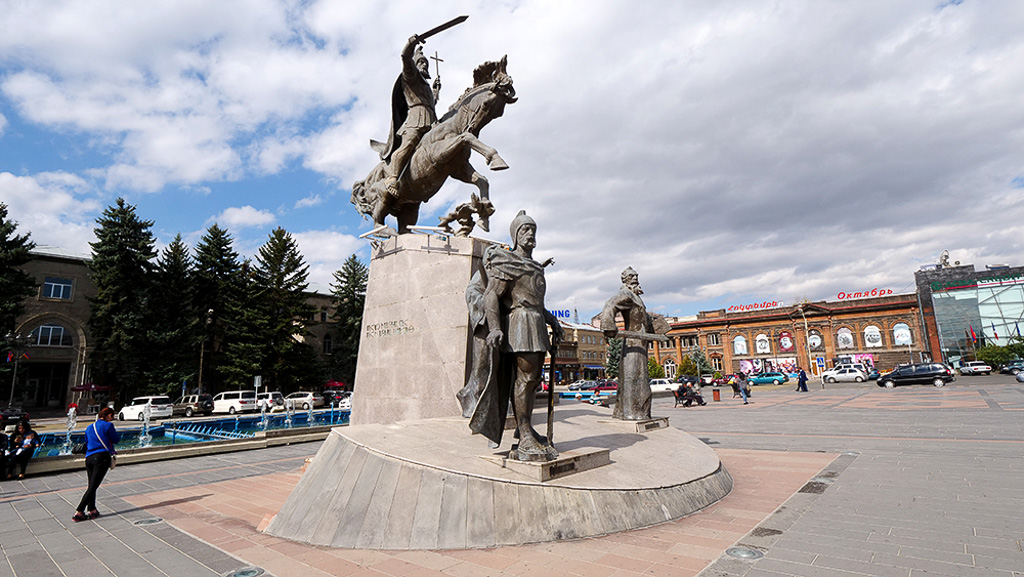 Formerly known as the May Uprising Square, Vardanants Square is bounded by several significant buildings. They include the Gyumri City Hall, a cinema hall from 1926, and a hotel from 1927. Most notable for history and religion buffs are the two 19th-century churches, Cathedral of the Holy Mother of God and Church of the Holy Saviour, on the square’s north and south sides, respectively. The square was even the site of a Holy Mass delivered by Pope Francis in 2016. 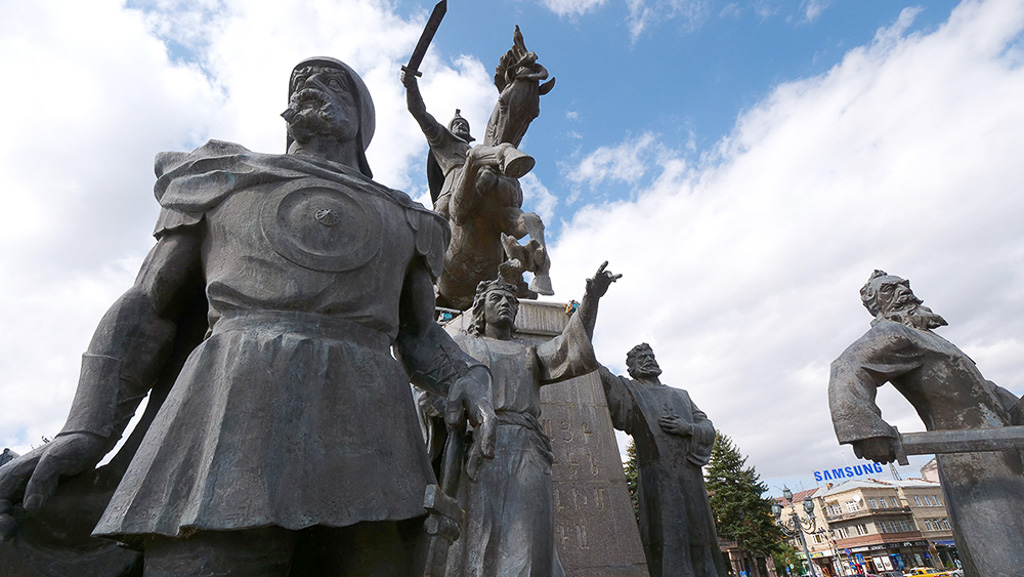 My guide Lusine and I initially went there to take a chariot ride. It’s something married couples traditionally do after their wedding. Unfortunately, the chariot wasn’t there when we arrived, but it gave me the chance to really soak in the beautiful sites and architecture in and around the square. If you love history and architecture like I do, this is a must-visit. It’s one of my top things to see and do in Gyumri and should be on every Gyumri itinerary!

Check out What to See and Do in Tatev, Armenia 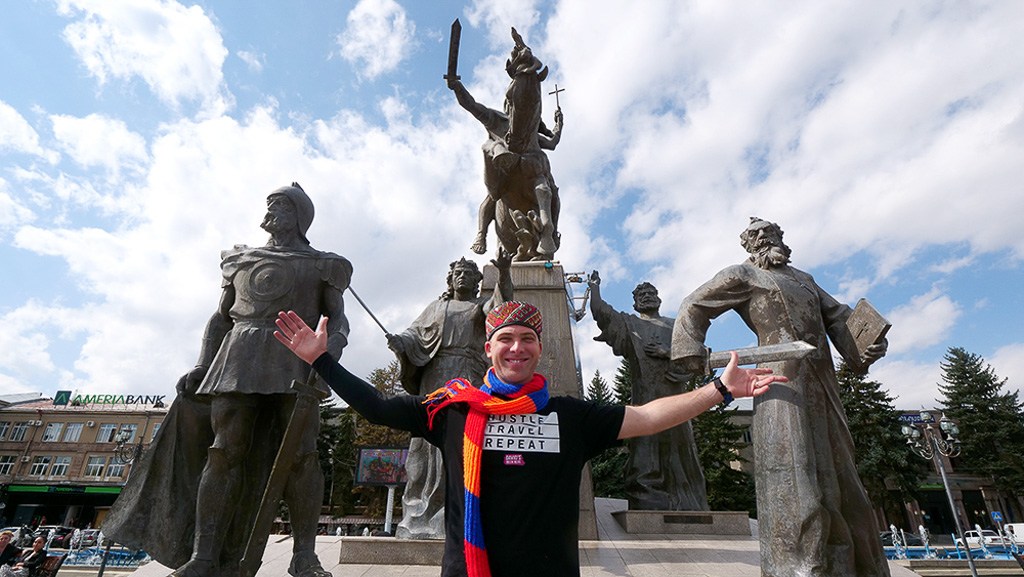 My time in Gyumri may have been a blur, but the memories I made there will stay with me forever. Between meeting the locals, watching the craftsmen painstakingly create their art, and having the most extraordinary fish meal I’d had in ages, it was simply unforgettable. Gyumri’s love of the arts permeates the entire town. You can’t help but feel the local pride everywhere you go. It’s one of the things I love the most about travel, and is something you can’t replicate. To feel it for yourself, book a trip to Armenia today!

NOTE: If you need to check the visa requirements of a particular country, click here. To apply for a visa, find up-to-date visa information for different countries, and calculate the cost of a particular visa, click