Day 11 of my 14-day trip through Albania continued in beautiful southern Albania on the road from Gjirokastër to Sarande. Join me as I visit the Blue Eye and enjoy some incredible Albanian seafood on the way to Ksamil, Albania!

My afternoon started on the road with my boy Erjan from Travel Media EU. We were finally making it back to the seaside! Sarande is only a one-hour drive from Gjirokastër. It’s also the southernmost city in Albania. There are tons of beaches and mussels and there’s tons of nightlife! 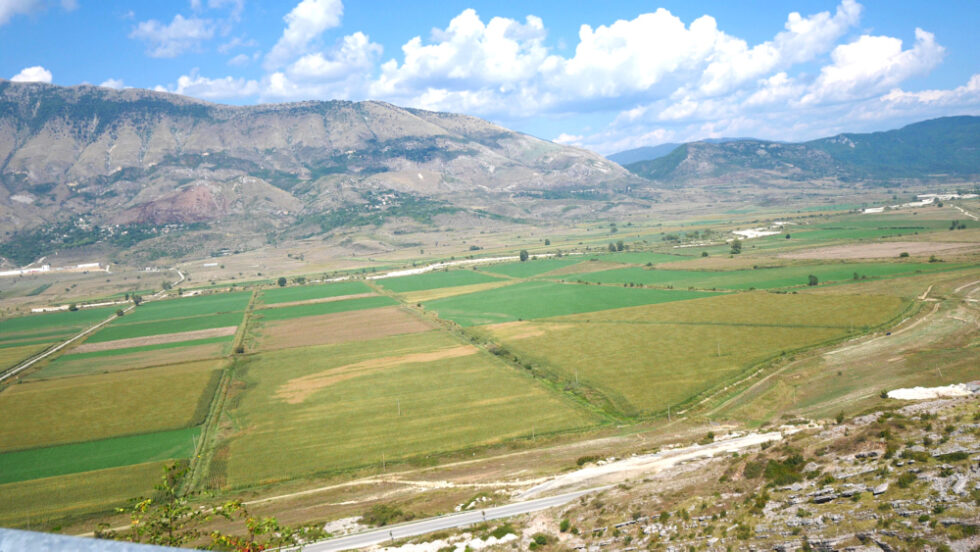 After 40 minutes, we turned off the road to get to drive another 3 kilometers to the Blue Eye before we arrived in Sarande and Ksamil, Albania. The road is rough, so I suggest taking a 4×4! There are lots of people there, and there’s even a bar there! 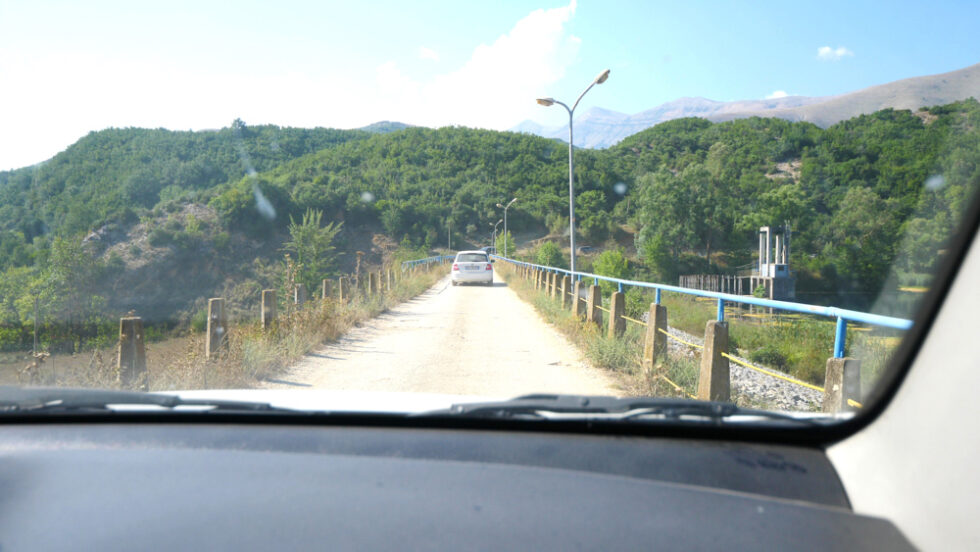 We crossed a bridge over a stream. The Blue Eye is a very popular tourist destination, so prepare for it to be packed when you visit. The water is a clear, vibrant blue. There were lots of girls in the water and some guys diving off a plank high above it. 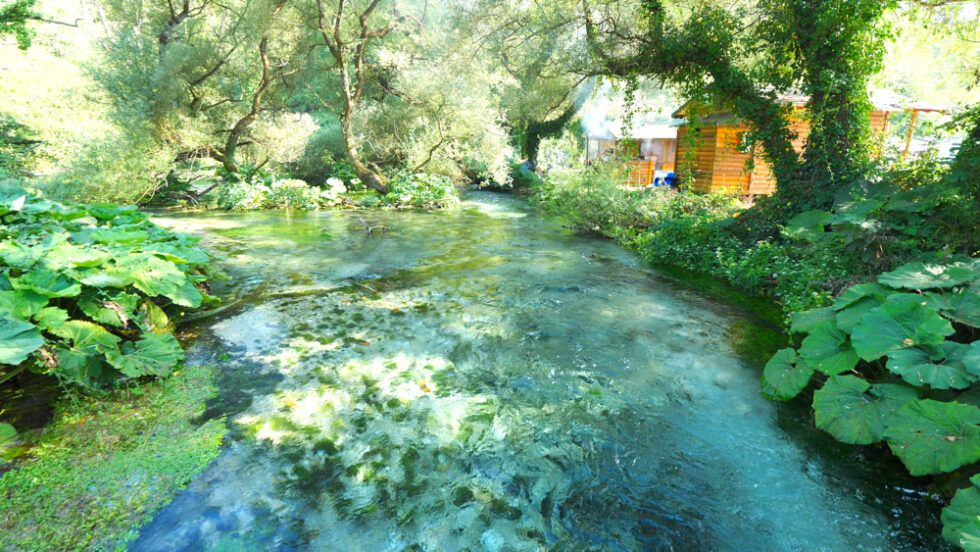 The water is ice cold. To get the best view, head up top. Just be careful because the planks are rusty and not meant for diving. It’s a beautiful natural area, and the forest around it is dense and jungle-like!

Then, we headed over to the bar. There are also two restaurants. There’s a terrace and a cottage over the water. It’s really beautiful and lush! Then, from the Blue Eye, we continued on to Sarande and Ksamil, Albania. There’s lots of traffic on the way, which is common in the summer. Finally, we arrived in Sarande, where I could see lots of apartment buildings. 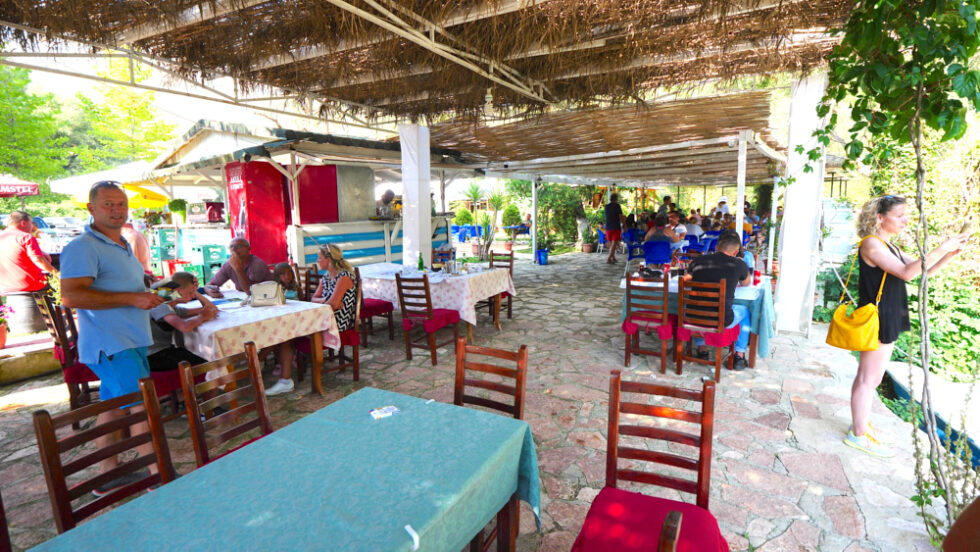 Sarande is a super hilly city with cliffs. There’s one main street and lots of buildings, including tons of condos. I could also see retail outlets and restaurants. There are more apartments than people in Sarande! Then, we arrived at the Bougainville Bay Resort, which is the best resort in the city! 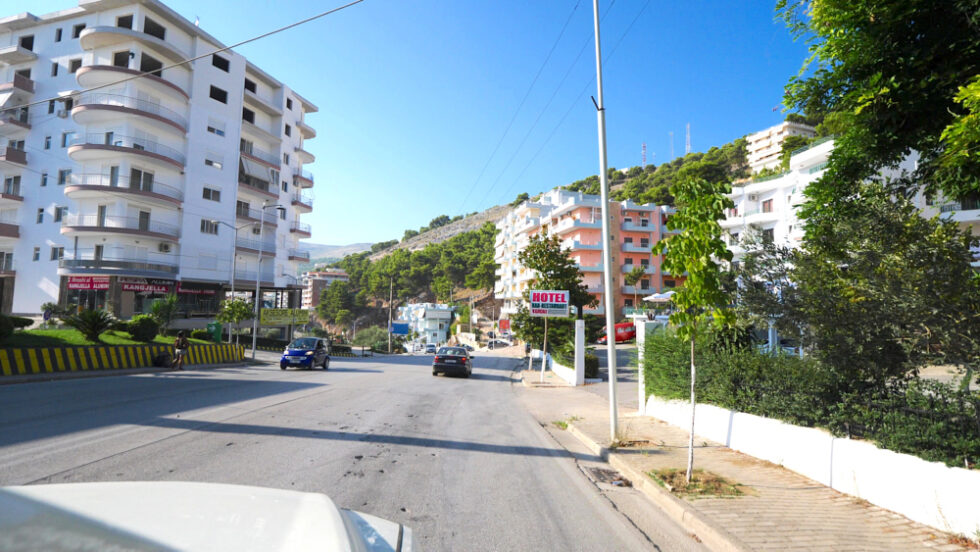 It’s very art-deco like Miami. In the lobby on the fourth floor are unique pink couches and twisting columns. There are 122 rooms in the hotel in total. They also have 5 swimming pools. Our rooms were on the third floor. In the staircase, we could see the pool and the sea outside! 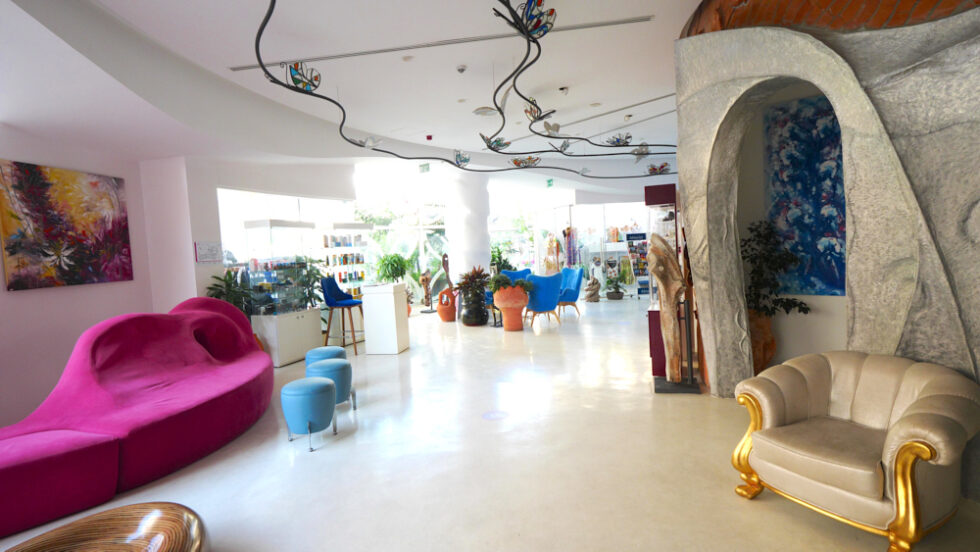 My room, 307, was beautiful, clean, modern, and artsy. I had two twin beds, a pair of chairs, a work station, and a view of the pool, the beach, and the sea. The bathroom was super nice with marble walls and a toilet surrounded by lights. But it was also minimalistic!

Then, Erjan and I headed to the village of Ksamil to get dinner. We took a backroad there. As we left the city, we passed a valley to the left and a hill to the right. After a 20-minute drive, we arrived in Ksamil. It’s a very popular spot for Albanians who visit Sarande. 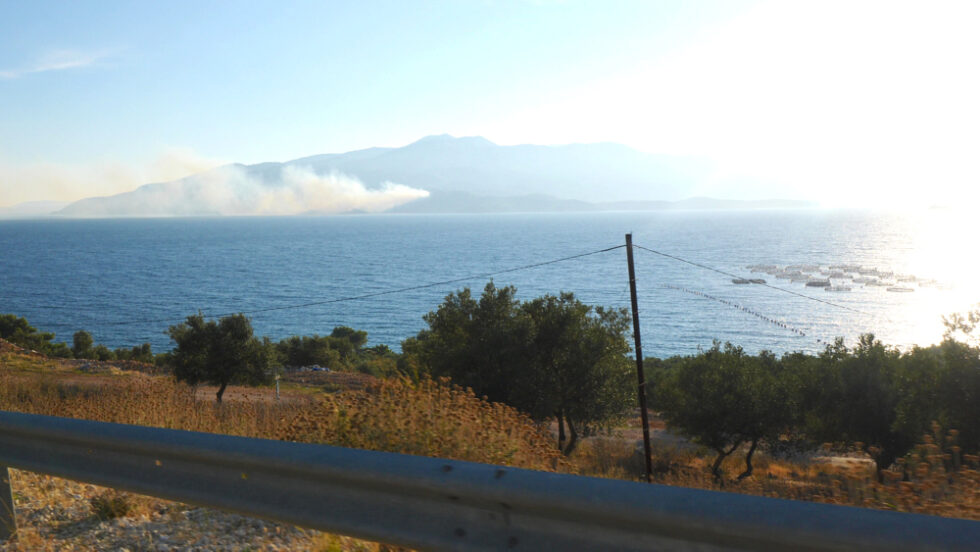 To our left was Butrint Lake, where there are mussel farms, which I would visit tomorrow. We arrived in Ksamil, where I could see the Greek island of Korfu. Ksamil used to be a village, but they’re building it up because of the increase in tourism. 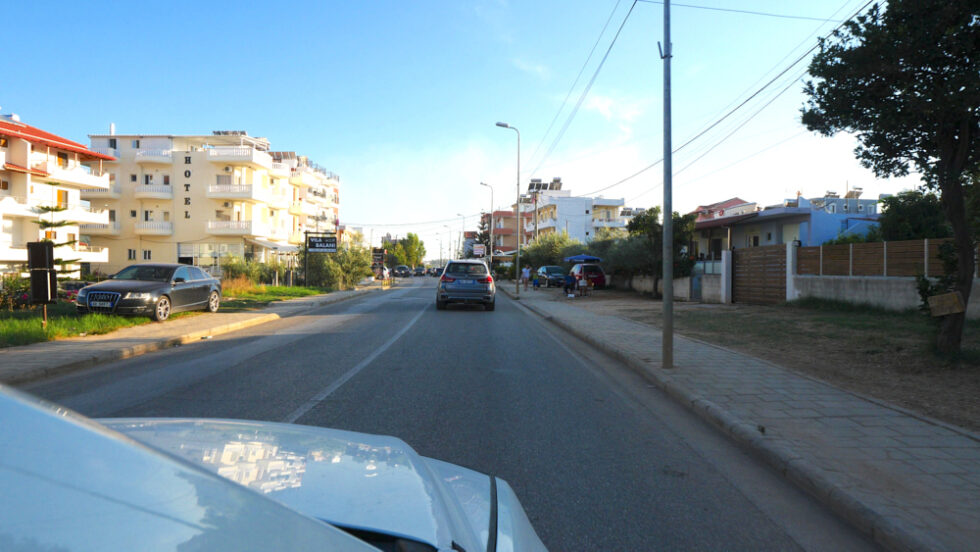 We made it to Bar Restorant Abiori, an incredible seafood spot with a terrace that overlooks the beach and the sea. There’s also a terrace on the rocks! I’d never seen anything like it! In the kitchen, we watched them cook shrimp, fish, squid ink risotto, pasta. There was also a huge pot of boiling seafood parts including shrimp shells, crab, and herbs. They use it as the base for their pastas. It looked incredible! 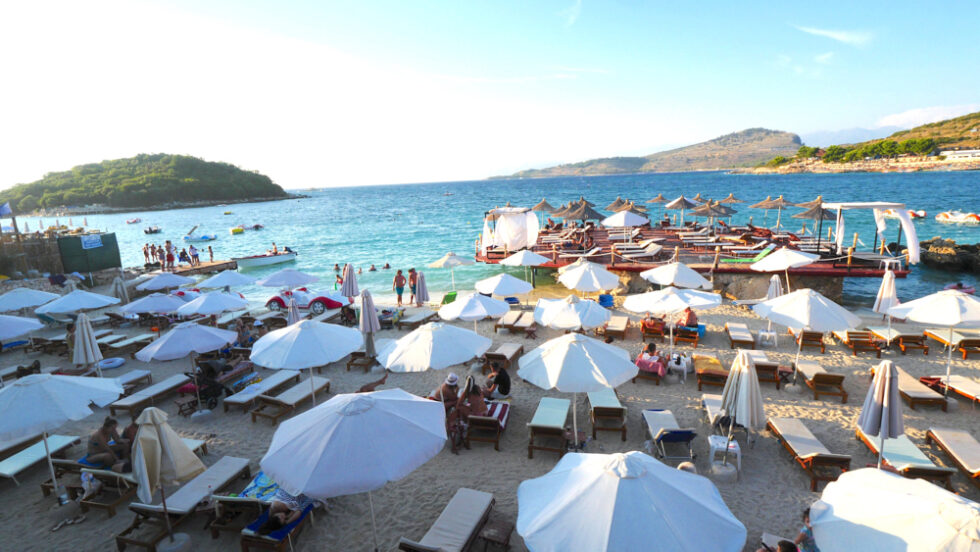 There’s also a fish ice box by the tables, where you’ll find prawns, squid, monkfish, and grouper. While they cooked our grouper, we headed over to the deck on the beach, where there were tons of loungers and wooden umbrellas over them.

Back at the restaurant, I started with a quinoa salad with avocado and mango. The mango was still a little hard, while the avocado was sweet! The walnuts in it added a nice crunch, and the pomegranate seeds added some fruitiness. The food in Albania is unreal. Eleven days in, and I hadn’t had one bad dish! Enjoying it with the view of the beach was incredible, especially with the rakija! 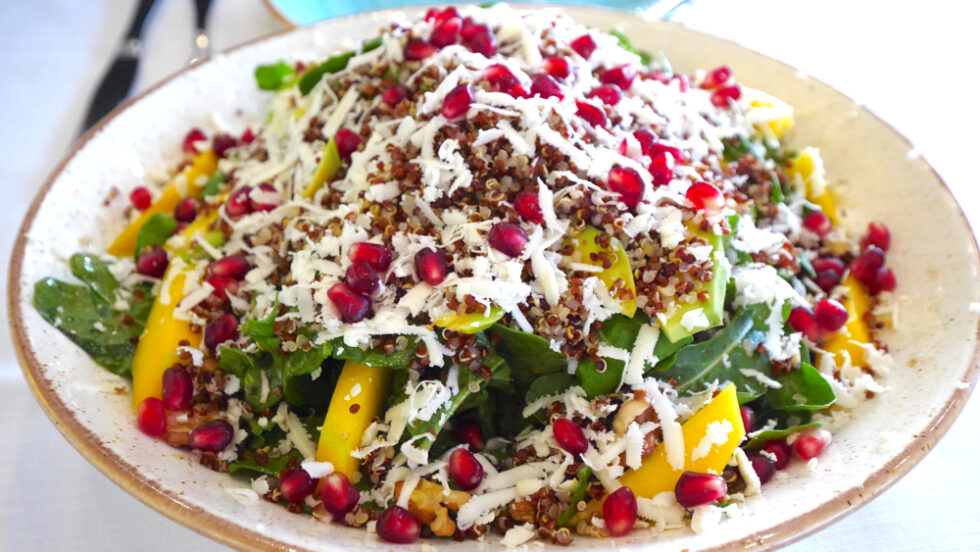 Next was a raw crudo plate including shrimp, octopus, prawns, and more! It was all marinated in oil and lemon. The shrimp was so good! There was also a super tasty fish that I couldn’t identify. The octopus was also super fresh! It was so succulent! 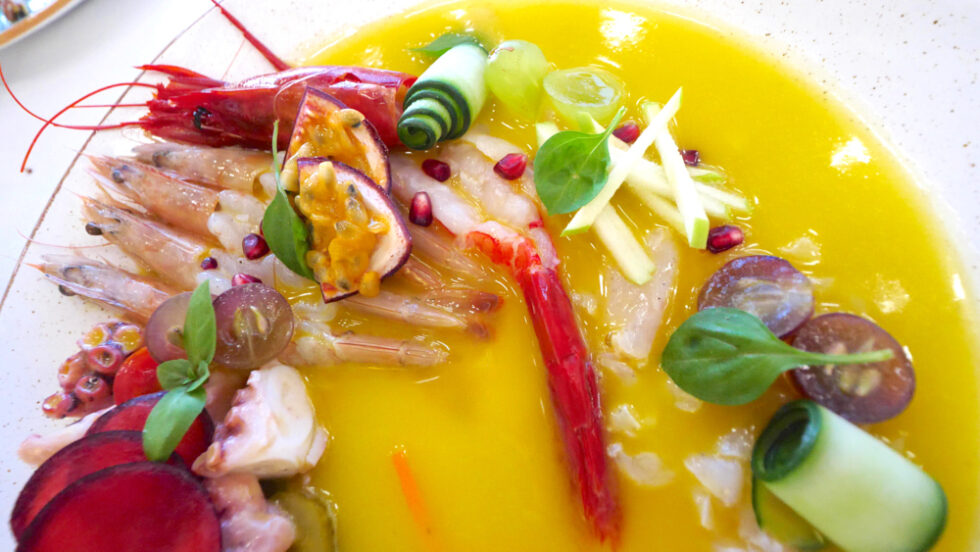 Next was a seafood pasta plate with mussels and shrimp. The pasta baguerie was perfectly al dente and the mussels were unbelievable. It was so fresh. One of the best seafood pasta dishes I’ve ever had! 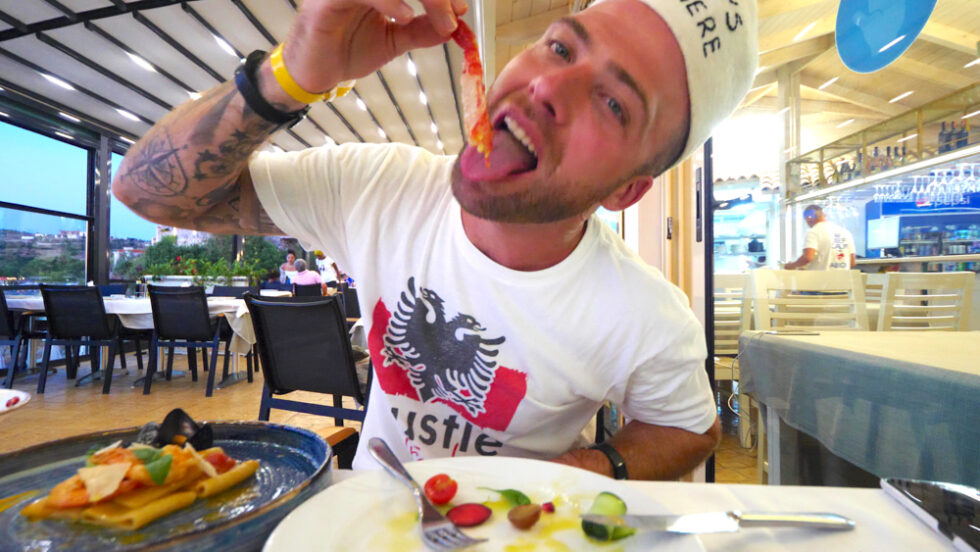 Then, we had some fish with dill and rice for the main course. The sauce was so zesty and creamy with a bit of lime! The rice was similar to risotto with pomegranate on top. The fish tasted like flounder and was light but super tasty.

Then, I had a dark rakija made from wild berries. It was similar to some jaeger. It was really good! 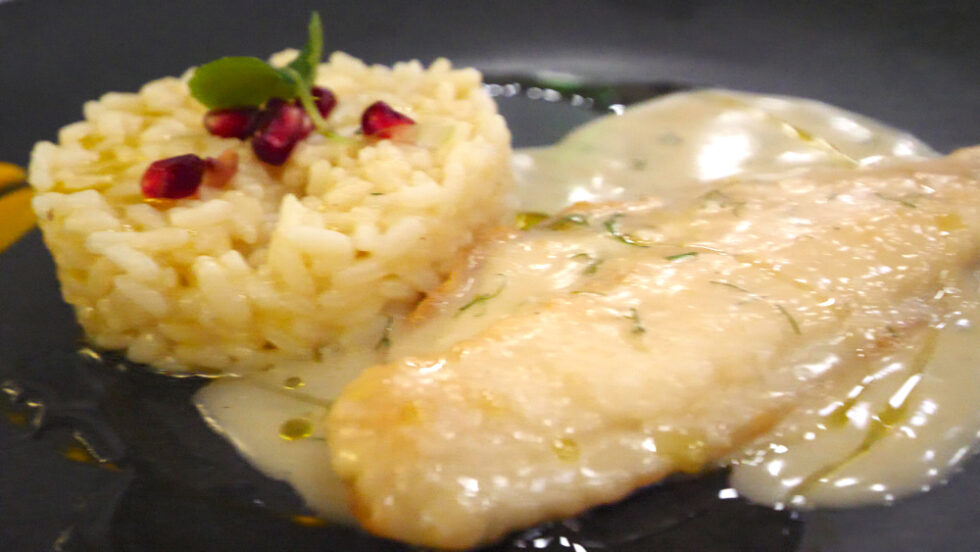 Wow, what an awesome way to end a day after visiting the Blue Eye and driving to Ksamil, Albania! I will never forget this day for as long as I live. From start to finish, it was one of my favorite days in Albania. Huge shoutout to my friends at Travel Media EU, Balkan Pearls Tour Operator, and Rental Car Albania for making this trip possible. I couldn’t have done it without them! 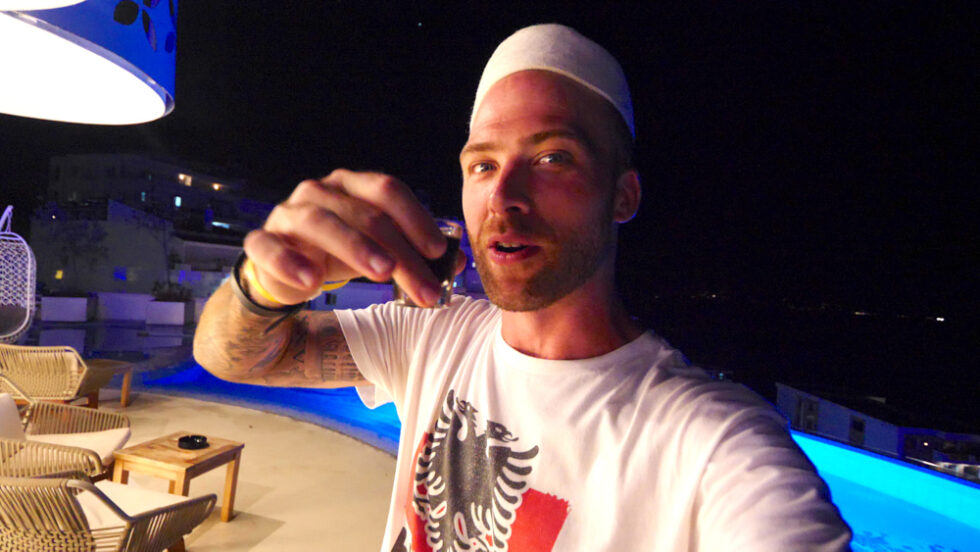 I hope you liked visiting the Blue Eye and having Albanian seafood in Ksamil, Albania with me! If you did, please give this video a thumbs up and leave a comment below. Also, please subscribe to my YouTube channel and click the notification bell so you don’t miss any of my travel/food adventures around the world!