My twelfth day in Albania began bright and early in the southern city of Sarandë. Come with me as I try my hand at farming mussels, explore ancient Butrint, and go for a swim at Ksamil Beach in Albania!

My morning began with a cup of coffee at a mini bar on top of the seaside cliffs in Sarandë, the southernmost city in Albania. From my view over the sea, I could see the island of Corfu, Greece. It was a beautiful way to start my day! I couldn’t wait to explore Butrint and head back down to Ksamil Beach, Albania for some fun and exploration! 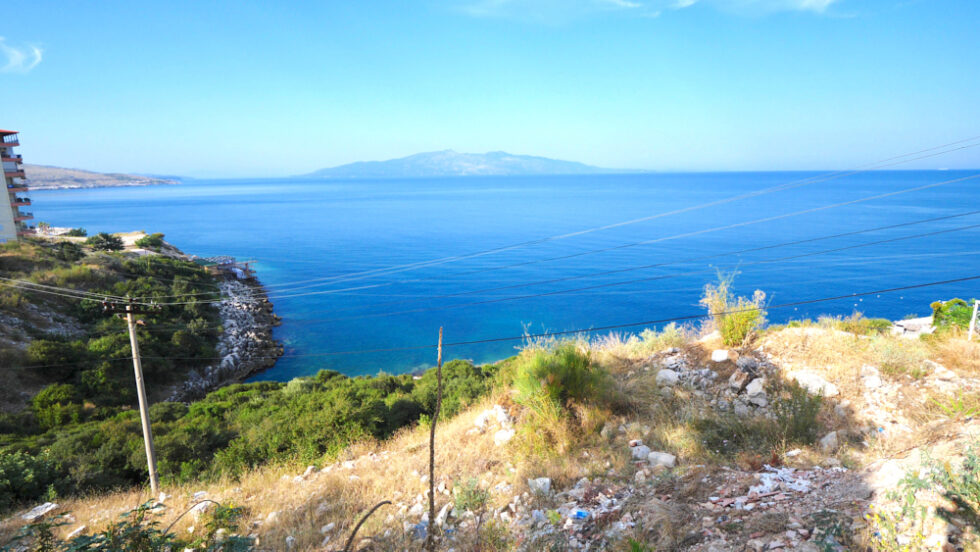 My boy Erjan from Travel Media EU and I hopped into the car to head back down to Ksamil. The resort village is full of restaurants and hotels and is home to one of the most beautiful beaches on Earth. It’s a huge tourist destination but the water is so clear, it’s like the Maldives! 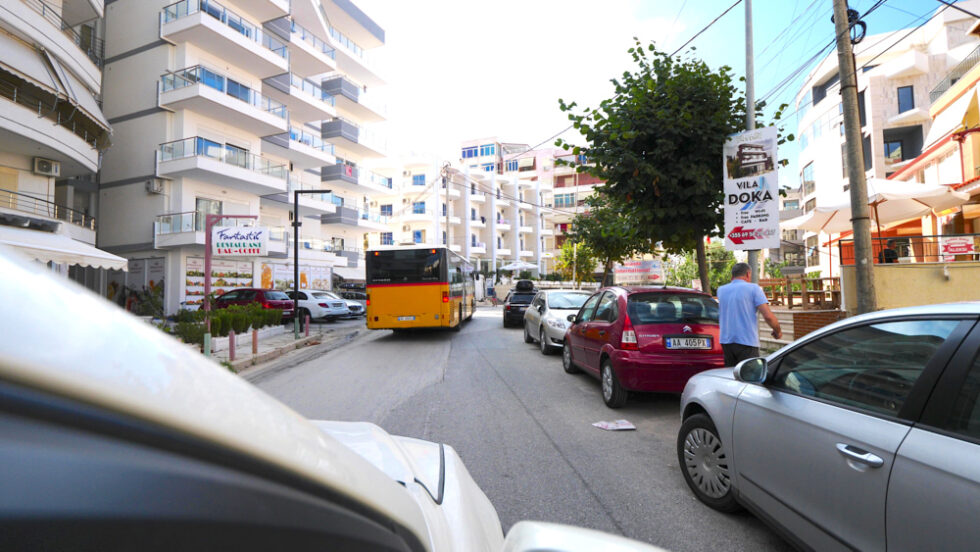 Along the way, we passed the mussel farms on Butrint Lake, which we’d visit later. Every 12 hours, the tides rise and fall. Lots of fishermen take these mussels, but it is forbidden to export them, so Albania is the only place where you can enjoy them.

Past Ksamil, we saw lots of hills and crystal-clear waters on the way to Butrint National Park. It was stunning scenery and looked like a lot of wetlands! It was so peaceful out there. It’s the only UNESCO national park due to the archaeological sites there. We could see one of them, the Venetian Triangular Castle, across the water! It was built to protect the city of Butrint. 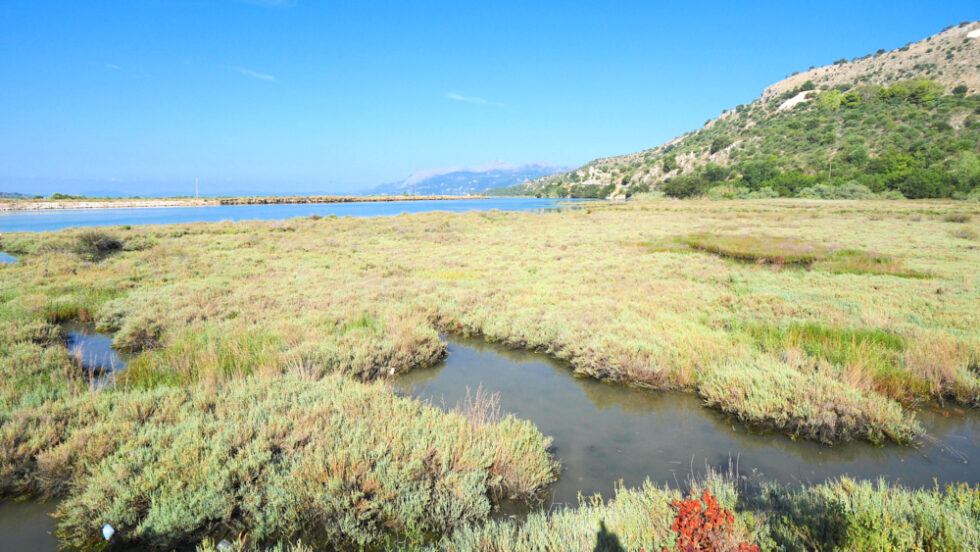 It only costs 600 lekes/$5.68 USD to enter the park. Inside the national park, we could hear the birds singing. Right inside the entrance are two columns and a path leading to the archaeological sites. The excavations there began in 1928, and the sites range from the Iron Age to the Middle Ages. Roughly 80% of the sites there are still undiscovered! 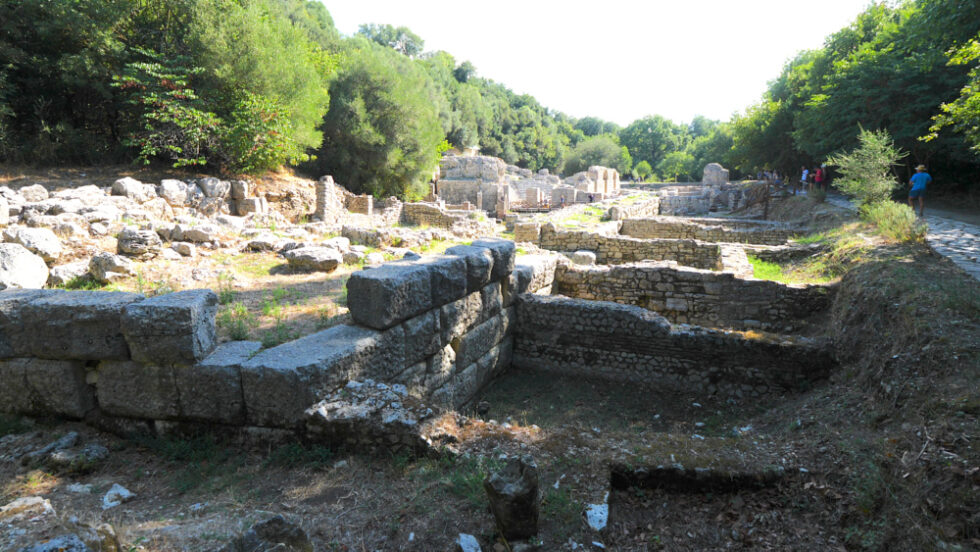 You can see ruined walls there, which were rebuilt by the Romans and Venetians. It’s a mix of history. In the center is a theater. It was built there because the acoustics are great. It was used for art and simple theater. There’s water in the center, and a deck has been built on top of it so you can walk across. The theater is made up of huge stones. It’s beautiful! 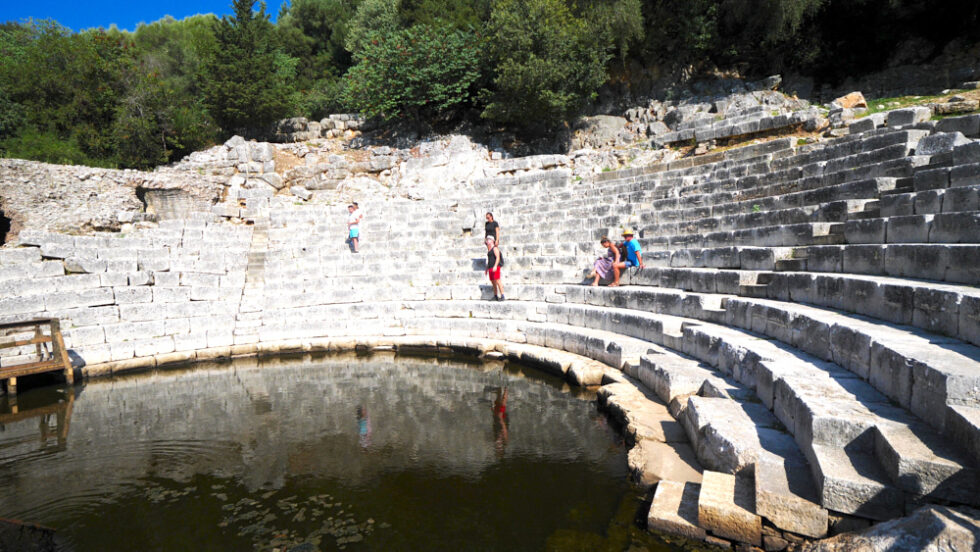 I suggest coming at 9 a.m. to beat the heat. From the theater, we headed to the Roman thermal baths, which were in use from the 2nd century BC. There’s also a Roman chapel from the 4th century AD, where you can see some mosaics between the small windows. There is a pool there now, which is home to lots of turtles!

Next was a baptistery from the 6th century, which has lots of broken columns and is home to the most beautiful mosaic floor in Albania. It’s covered by sand to protect it, but you can see images of it. It’s beautiful! 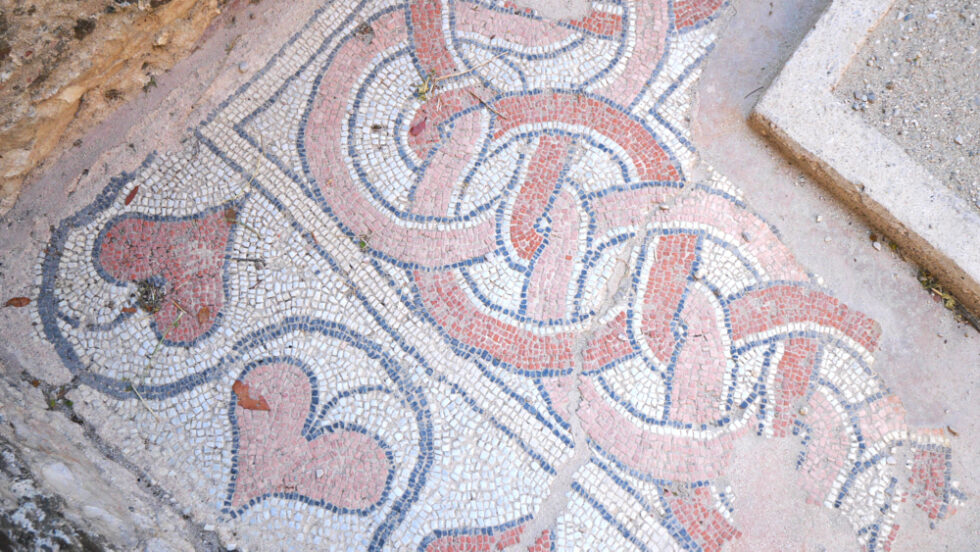 There’s also a basilica from the 6th century AD, which was the largest Balkan basilica during the Roman times. It was massive, with at least 30-foot walls, and it was perfectly intact except for the walls. There are more mosaics that make up the ground floor, but it all hasn’t been excavated. 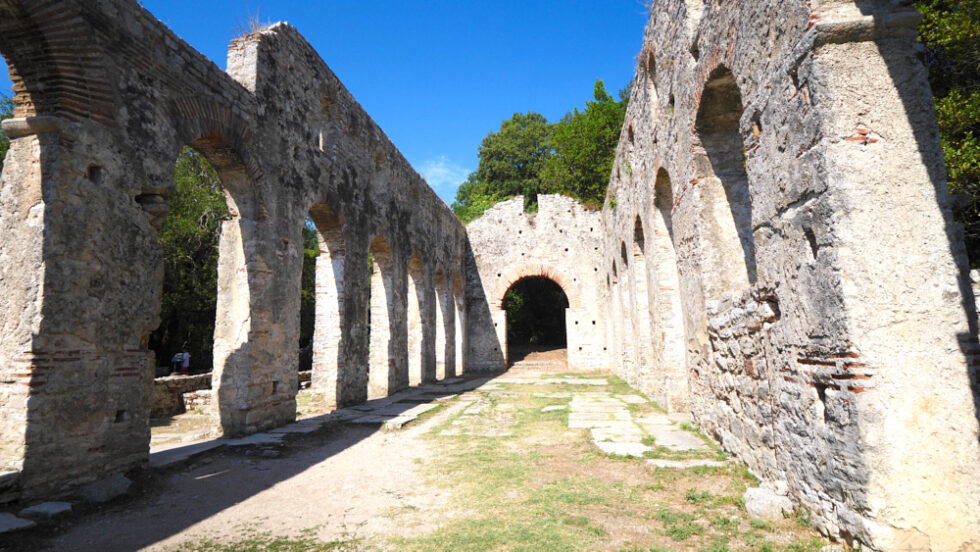 I loved how many sections there are at Butrint. The site is massive and so spread out! We walked through a bit of forest to more walls, which were part of the fortification of the city. There’s an acropolis as well. The walls near the lake are high, probably about 20 meters. 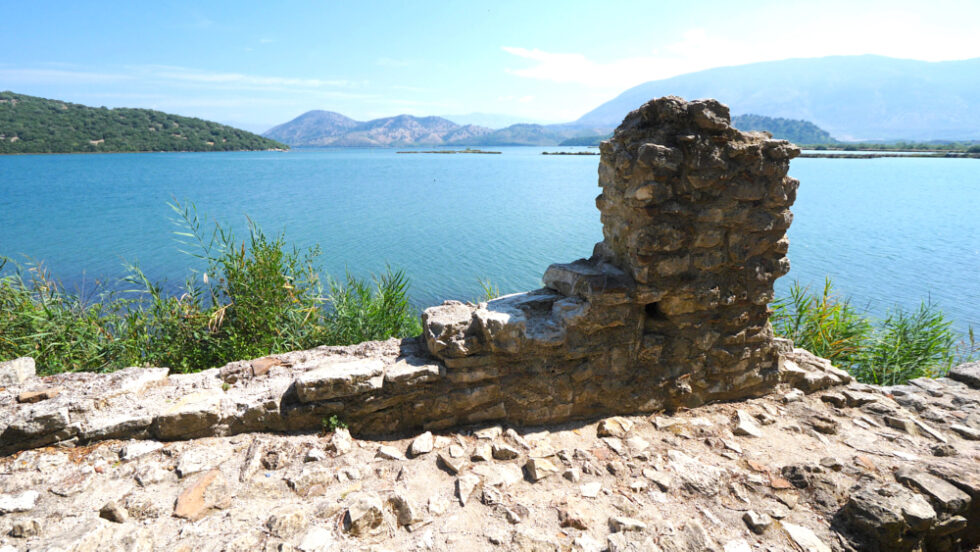 One of the early fortifications is the Lake Gate, which was built in the 4th century BC. It was a secret gate that villagers would use to transport food and other essentials inside. It blew my mind that ancient people lifted huge stones to build these walls and buildings! 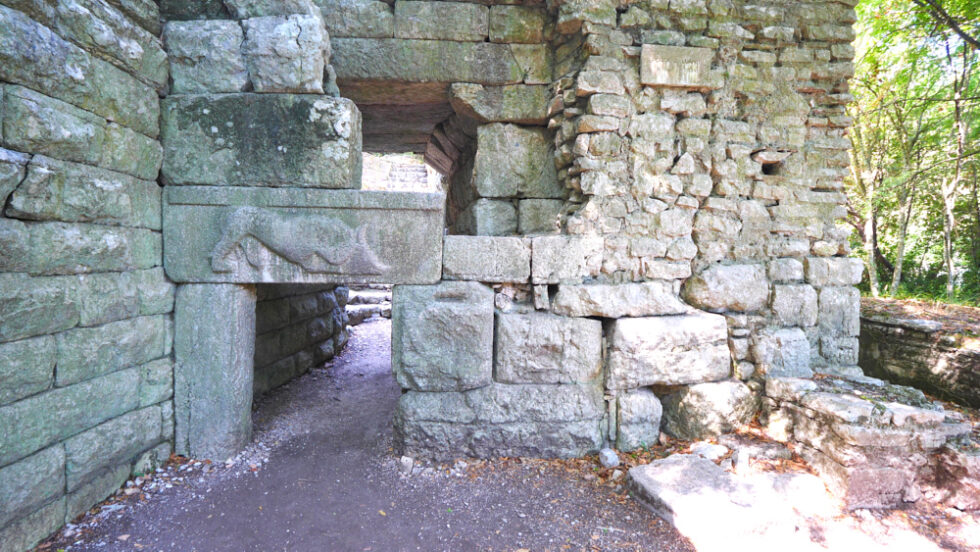 Next was the Lion’s Gate, which has a low ceiling, so you must bow to enter it. It was lowered in the 5th century AD by added a stone with a carving of a lion eating the head of a bull. It was also a form of protection, as enemies would have to bow and could only enter two at a time.

There is also a well and a staircase heading up. From there, you have to hike to the acropolis. The staircase has been restored. After the renovations of the fortification in the 13th century, a proper castle was built overlooking Butrint Lake. Here, you’ll find the acropolis and the watchtower, as well as a garden and some cannons. 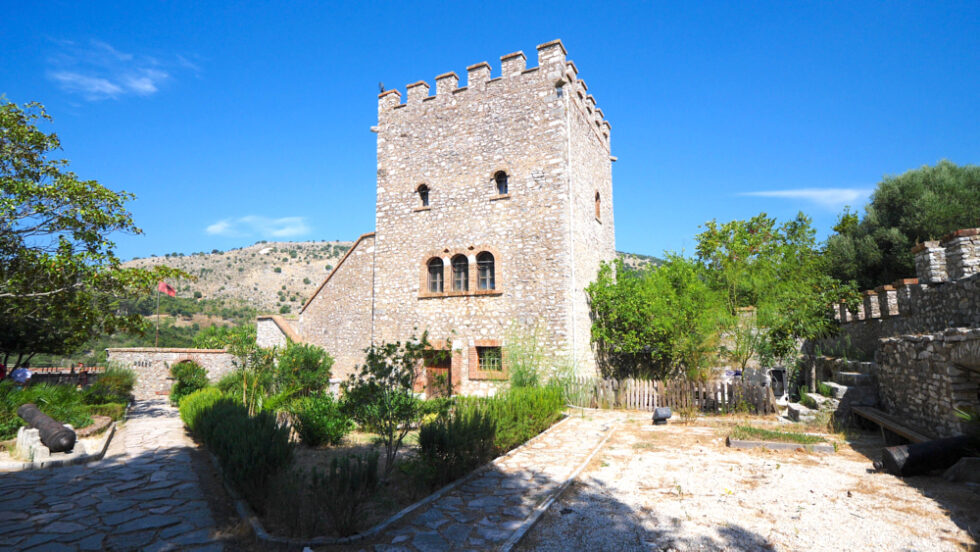 There’s also a museum. Here, you have an amazing view of the lake. You can also see an incredible archaeological find: the head of the statue of Apollo, the Greek god of music. This one is a replica, but the original is in Tirana. After 90 minutes, we headed back to the park entrance to see the Venetian defense tower, which protected the canal. What an experience! 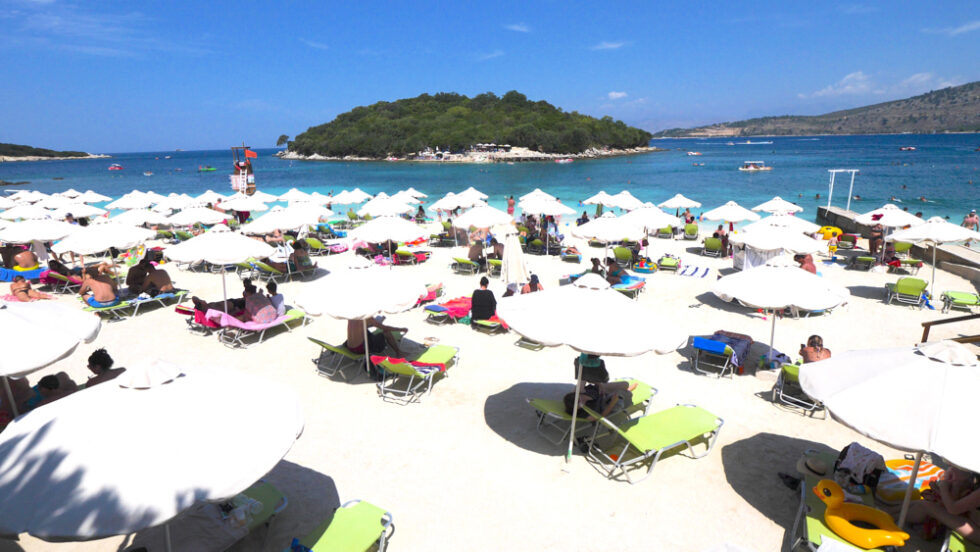 After exploring Butrint, we headed back to Ksamil Beach for some fun in the sun in southern Albania. There are plenty of places in this beach town where you can buy a bathing suit if you didn’t bring one. I bought some swimming trunks for $10 USD. We were in the most famous spot of Ksamil Beach, Three Islands, so it costs 12 Euros to rent an umbrella for two people. 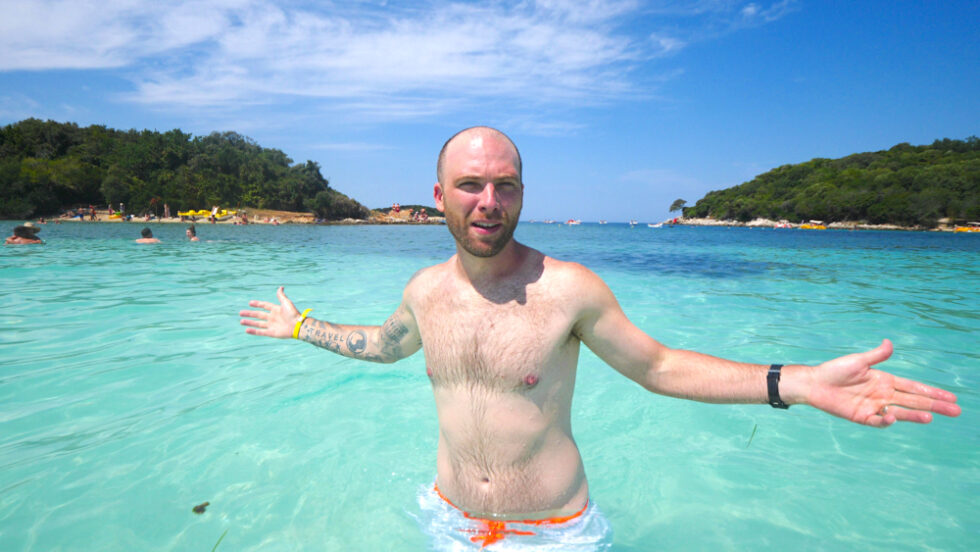 We jumped into the water, which was really cold and shallow. The beach was packed with people, including some models. There’s a restaurant and a bar as well. We only had 20-30 minutes to enjoy the beach. Then, we headed to get some mussels!

After a 5-minute drive, we arrived at The Mussel House, a rustic restaurant on the lakeshore, where I met Linda. But before we could eat at the restaurant, we had to go out to get the mussels! We headed on a boat tour of Butrint Lake to the mussel farm we saw from the road earlier. 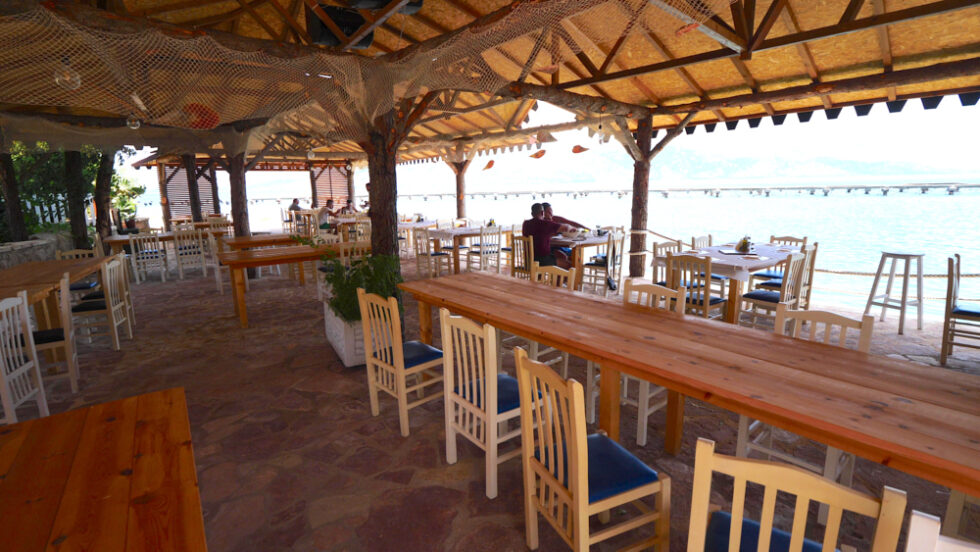 There are pods below the water where the mussels are. The farm is divided into sections, which are owned by different people. The Mussel House has their own section. They have hundreds of thousands of mussels. I couldn’t wait to eat some! 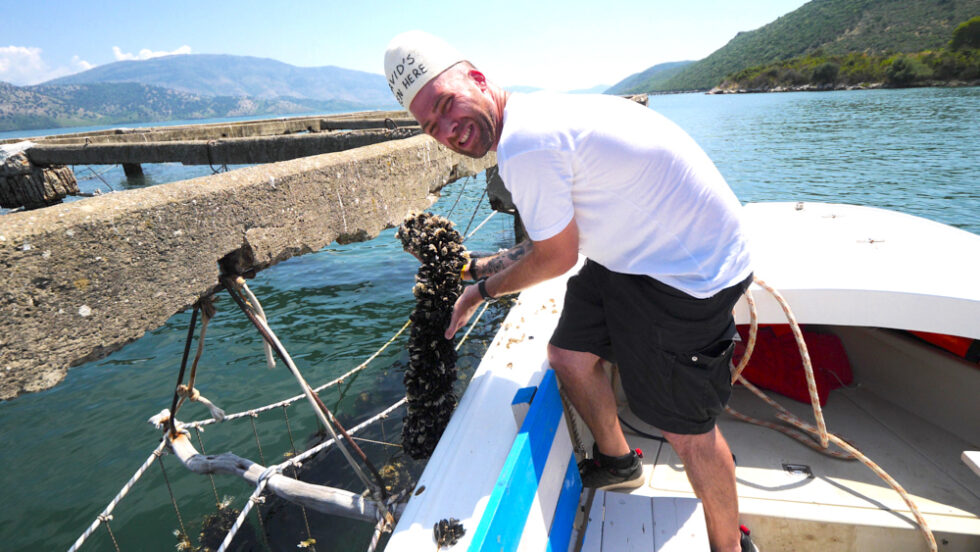 Back at the restaurant, Erjan and I toasted with some tasty white Albanian wine. Then, Linda took me into the kitchen to see them cook the mussels. I watched the chefs cook them in oil, parsley, garlic, and white wine. It smelled so good! Then, they added some cream to some of them! 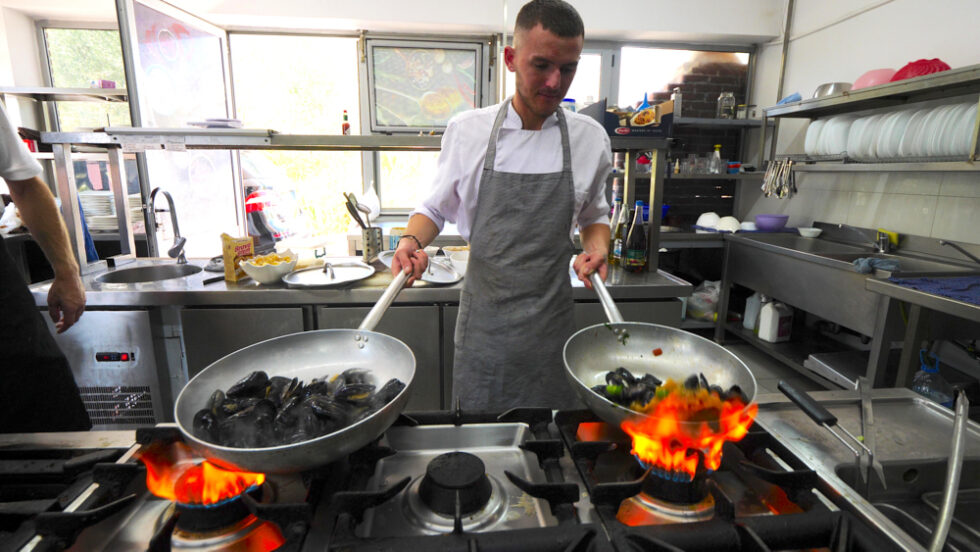 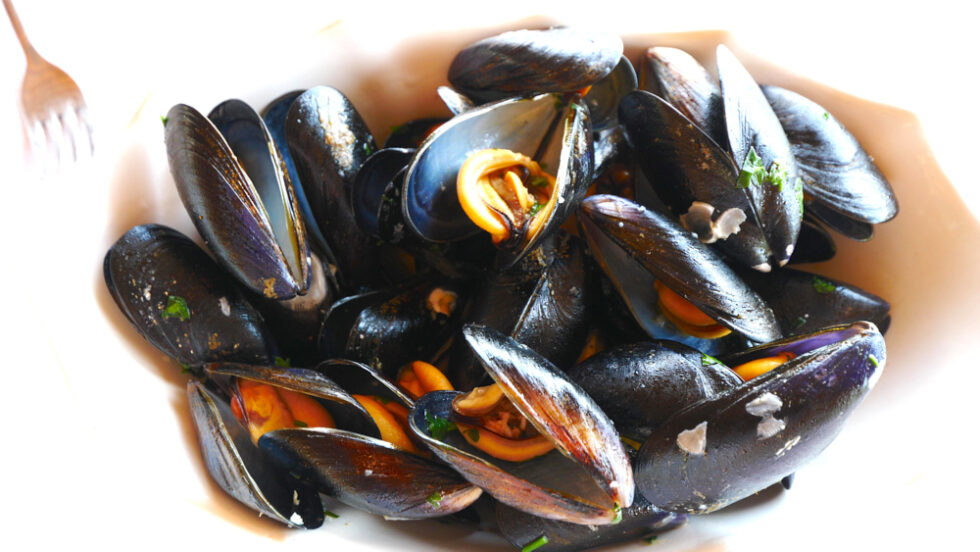 Erjan showed me how to use the mussel shell as a utensil to take the meat out of the shells. It’s the Albanian way of eating them. The salted ones were so succulent and tasty! We had at least 150 mussels. 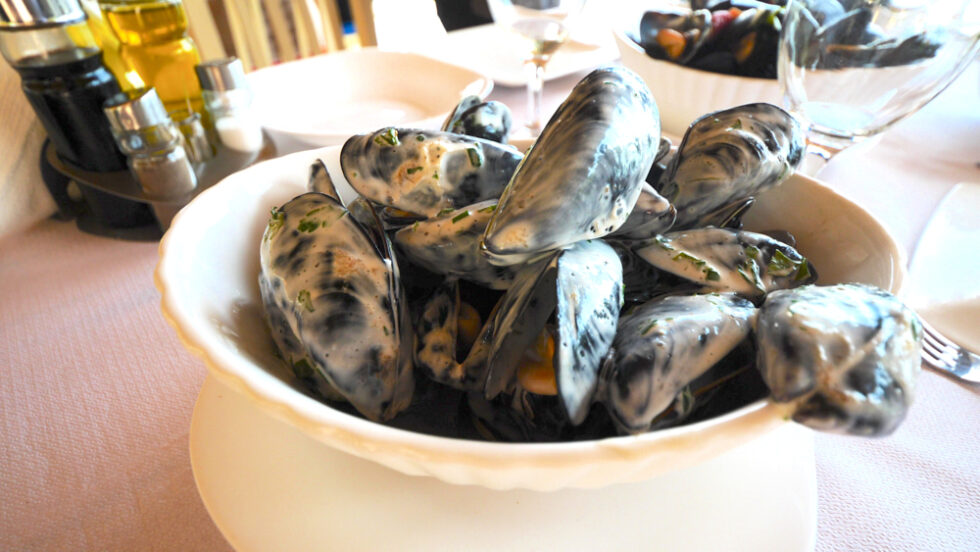 The tomato and onion ones had a nice, juicy burst with a bit of sourness. They were also crunchy! They were amazing and so different. But the star was the creamy mussels, which were ridiculously good. It was like a creamy pasta. It was so good, I had to lick some of the shells clean!

I loved eating the mussels Albanian-style! I also really enjoyed the broth from the tomato-and-onion mussels, which was like a seafood and vegetable soup! The white wine broth was tangy from the lemon, and the cream was nice and rich. The risotto was super tasty! It was super creamy and moist, and very different from paella or biryani. The best thing is, this huge mussel feast only costs 600 lekes, or just under $6 USD! 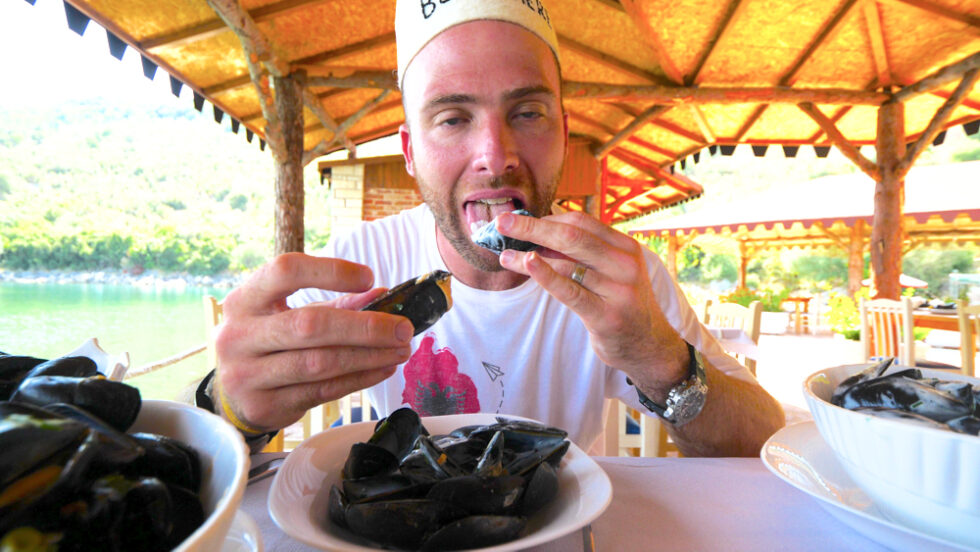 I have to give a huge shoutout to my friends at Travel Media EU, Balkan Pearls Tour Operator, and Rental Car Albania. My adventures in Butrint and Ksamil Beach wouldn’t have been possible if it weren’t for them! I highly recommend booking with them when you visit Albania. 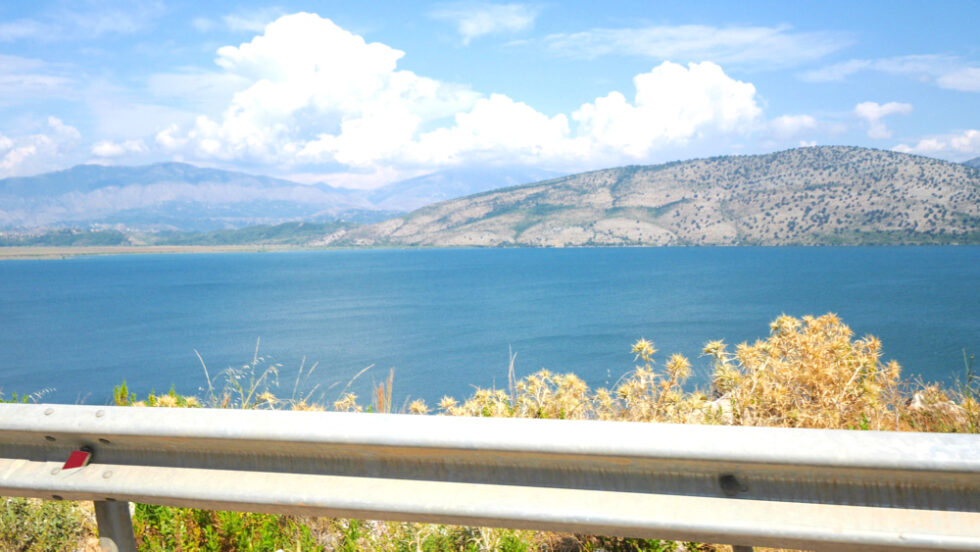 I hope you liked coming with me to farm mussels, explore Butrint, and swim at Ksamil Beach in Albania! If you did, please give this video a thumbs up and leave a comment below. Also, please subscribe to my YouTube channel and click the notification bell so you don’t miss any of my travel/food adventures around the world!