We started our adventure at the Central Market, which is located in a building built back in 1933. It’s a one-stop-shop that includes a supermarket and street food. They also have a three-kilo mortadella sandwich. São Paulo was influenced by Italian, Japanese, Spanish, Portuguese, and German immigrants, so there’s a huge mix of flavors there, and I couldn’t wait to try them! 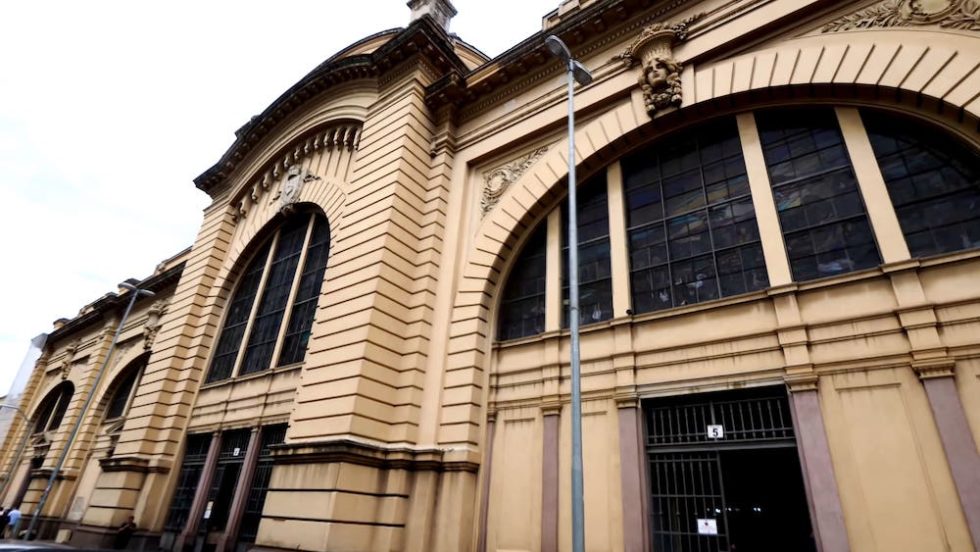 I’d be exploring with my friend Aurelio from Be My Guest SP and Guilherme from Rio4Fun and Rio4Food. Inside are vendors selling seafood, pork, cheese, fruit, meats, alcoholic beverages, and more. The spaced-out layout of the market reminded me of a Spanish market! Because it was December, it was decorated for Christmas! 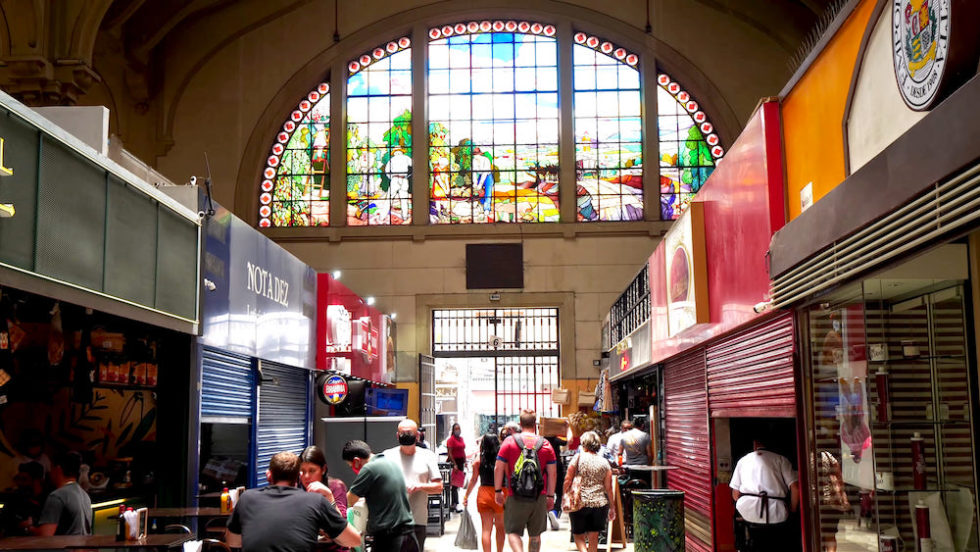 The market has a couple of hundred vendors. We came across one selling cuts of beef, dried meat, chorizo, and more. They sell all the types of meat and beans that are used to make feijoada, a Brazilian stew made of beans and pork.

They also have bacalhau, a type of cold-water cod from Norway. We also saw lots of olive oils, chili sauces, and chilies. I tried a chili, which was super hot. I also had some amazing Italian garlic. They also had olives, nuts, and spices. 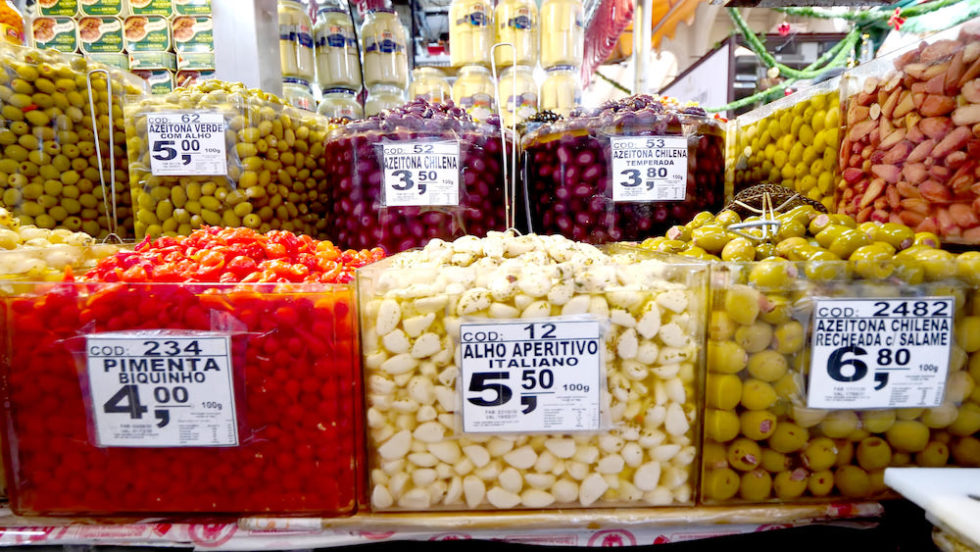 Next was a type of spicy salami drenched in oil and a spicy cheese salad with grapes and pineapple. If you’re a foodie, this market is the perfect place for you. It’s never-ending food as far as the eye can see! 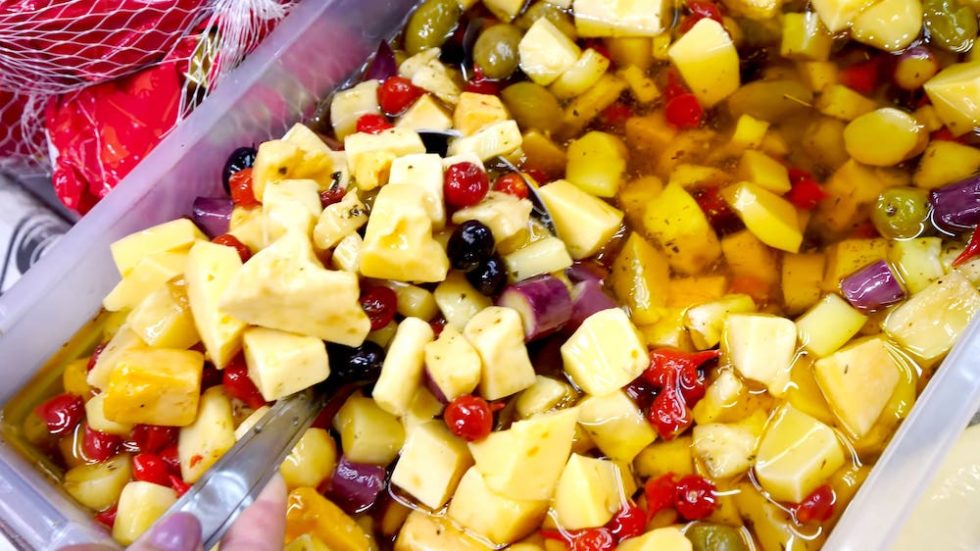 Next, we continued our Brazilian street food tour in São Paulo, Brazil at Bar Do Mané to try a mortadella sandwich. Mortadella is a type of cold cut that’s a blend of beef and pork. I used to eat it in Italy a lot. The mortadella was phenomenal and peppery. I loved it with lime squeezed on top. It was the best mortadella I’ve ever eaten! Then, I went in the back to see them make a mortadella sandwich! 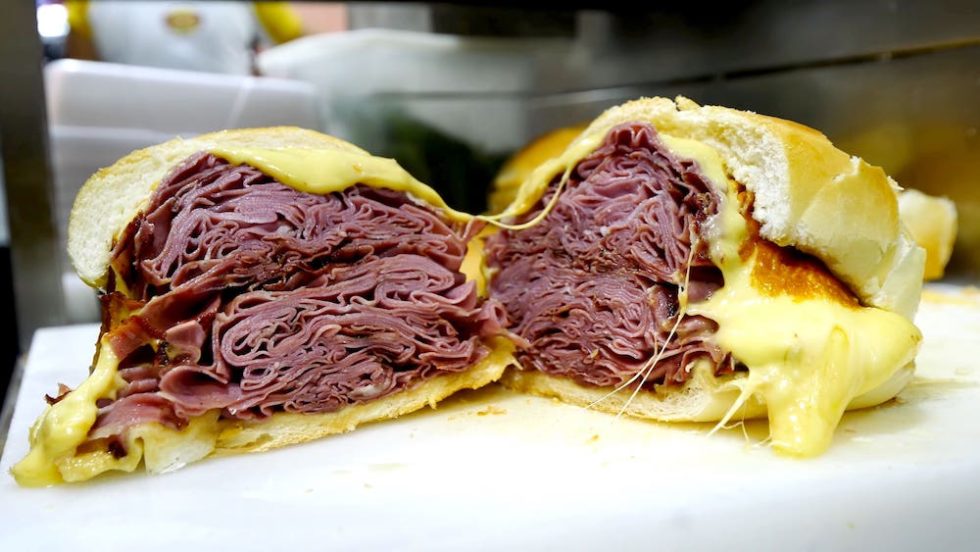 The sandwich was massive and dripping with gooey, salty cheese. I also had some pico de gallo, with onions, tomato, and cilantro on it. The olive oil and vinegar on it was amazing, and I added a bit of hot sauce. It costs only $7 USD and was super filling. 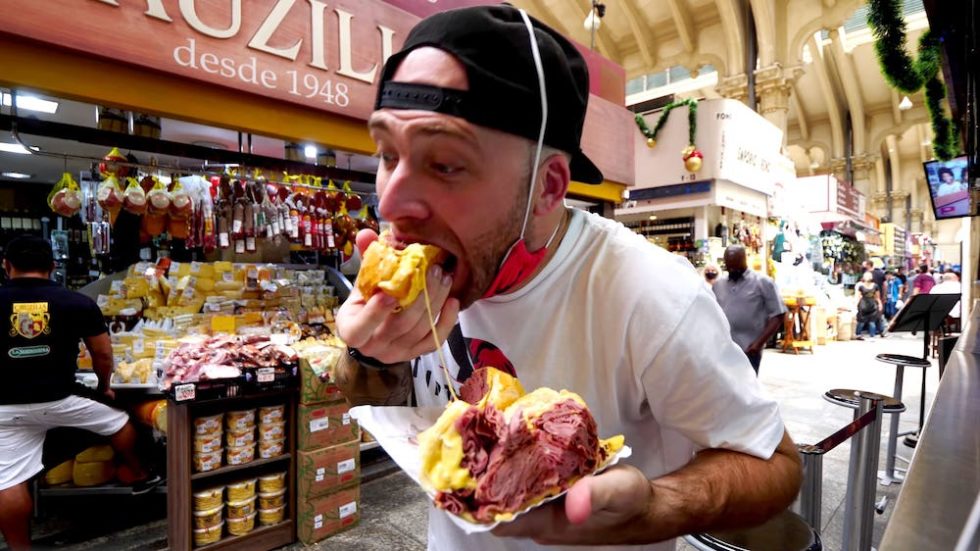 Next, I went to get some draft beer at Bar Do Mané. It was a crystal-clear, crisp, and refreshing lager. It was perfect for a hot day like today! Then, we went to try some fruit in the center of the market.

We then tried some delicious, watery yellow dragonfruit; some amazing Brazilian figs; dates with a strawberry that was almost like strawberries with chocolate. I also tried a spongy, unique cashew fruit, two different types of passionfruit (including a green one from the center of the country that was full of juice), and a fleshy yellow kiwi. 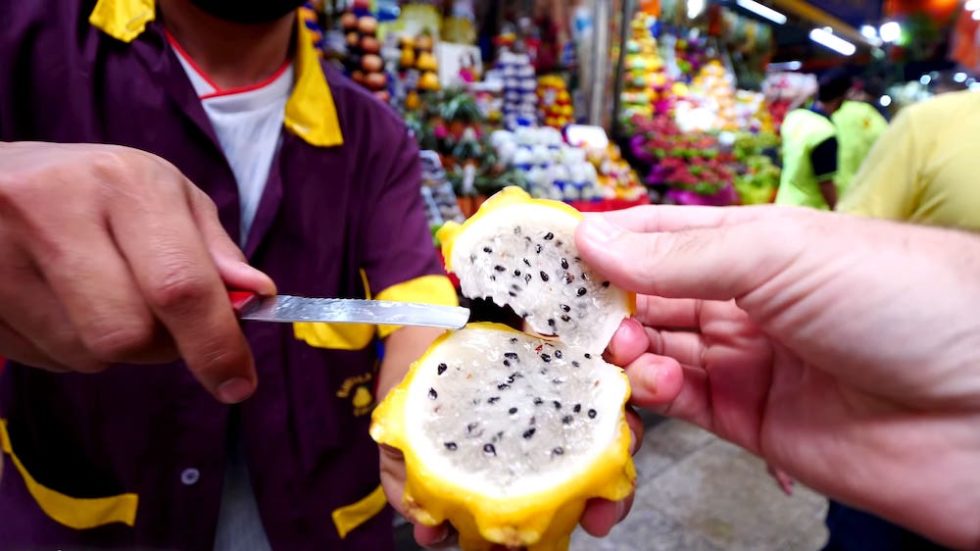 I also tried some amazing mango, which is my favorite fruit. I eat it all the time in Miami and it’s the national fruit in India. I couldn’t help but suck all the flesh off the skin. It was so juicy and delicious! Then, we headed up to the second level of the market, where they have 10 restaurants, including Brazilian and Japanese spots. 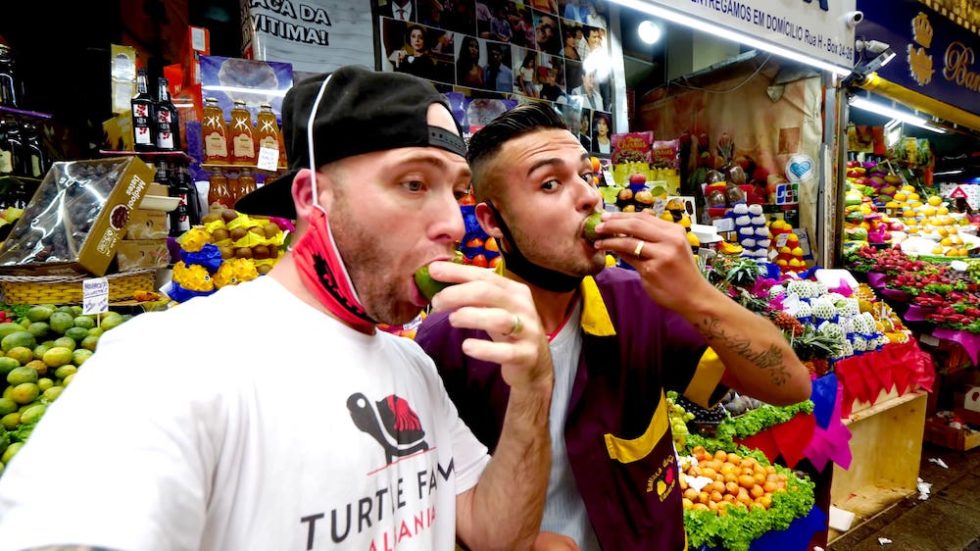 While it’s an amazing spot to grab a bite to eat, the best thing about the second level is that it gives you unparalleled views over the entire market. You can see all of the stalls and vendors from up there, from the fruit vendors to the meat vendors! 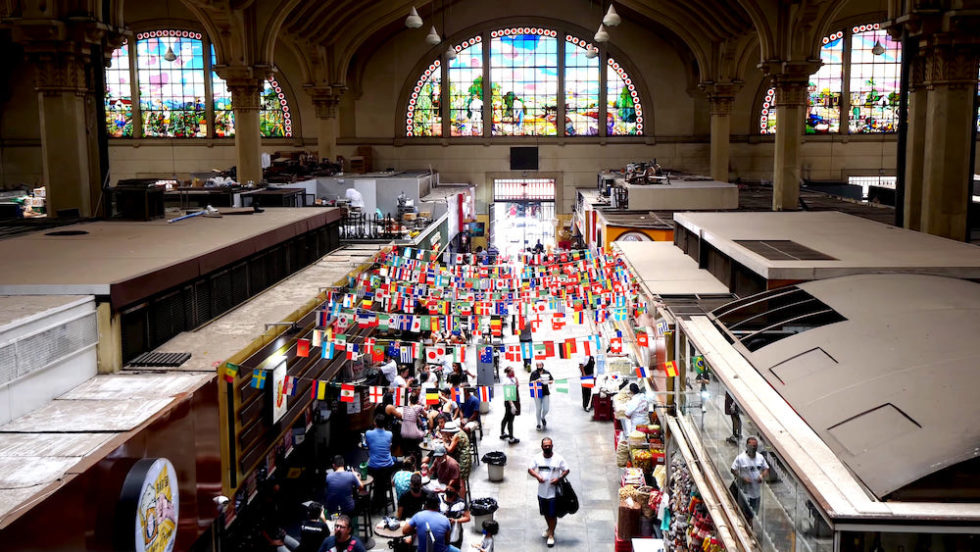 I smelled some amazing-smelling tobacco that looked like a sausage, and then we tried some locally-made upscale cheese. The mozzarella was so good! I followed that with some strong, fragrant, and floral sugarcane alcohol. It was similar to grappa and rakija and was smoky like tequila. Next was some unreal fig cachaça and some Antarctica brand guarana sparkling cherry soda. 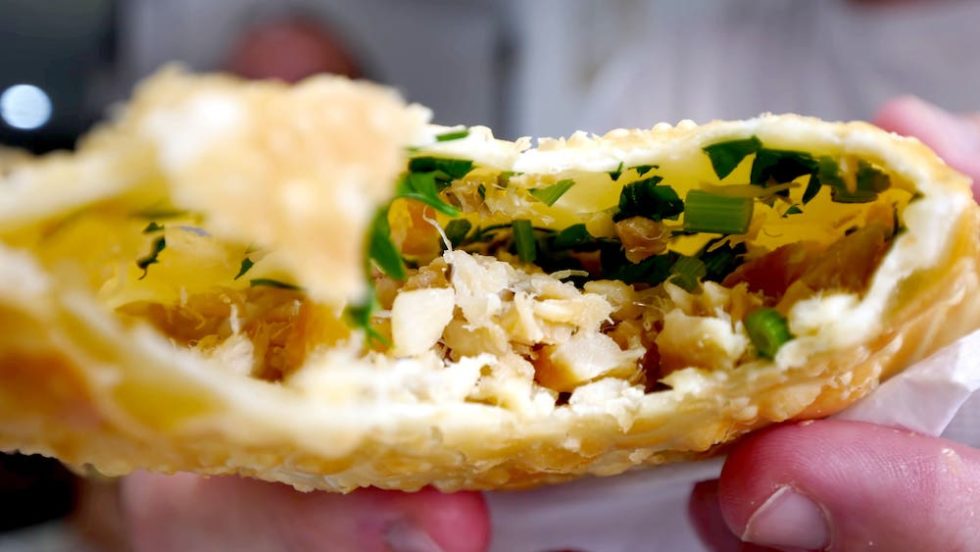 Then, I had a pastel de bacalhau, which is a fried, crispy pastry stuffed with shredded cod and herbs. I added some chilies, which made it even better! I loved it! The dry fish wasn’t salty but was nice, fresh, and flaky. It was like a better version of an empanada! Next was orange, lime, and strawberry juice.

This is one of my favorite markets in the world! The Brazilian street food in São Paulo, Brazil is unbelievable! Huge thanks to my friends at Be My Guest SP, Rio4Fun, and Rio4Food for giving me such an unforgettable experience! 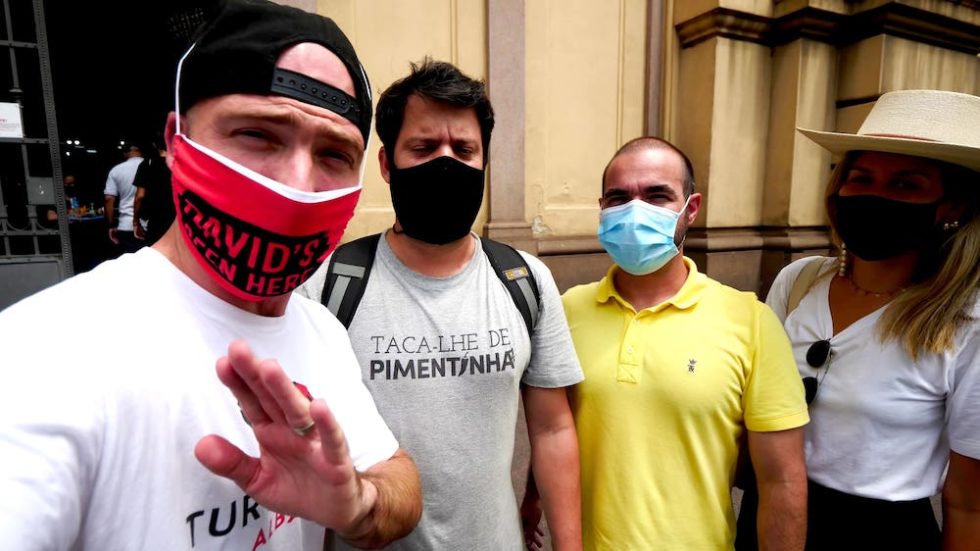 I hope you liked coming with me on my Brazilian street food tour in São Paulo, Brazil! If you did, please give this video a thumbs up and leave me a comment below. Also, please subscribe to my YouTube channel and click the notification bell so you don’t miss any of my travel/food adventures around the world!