After an eventful morning exploring monasteries in southeastern Georgia, my adventures continued in the Kakheti wine region! Come join me as I have a once-in-a-lifetime Georgian BBQ and wine experience at Vineria Kakheti in Sagarejo, Georgia!

My guide Tim from Friendly GE and I kicked off our next adventure in Sagarejo, roughly 40 minutes east of the capital city, Tbilisi. We’d be checking out a local winery called Vineria Kakheti, trying some delicious foods, and of course, drinking some of their wines! 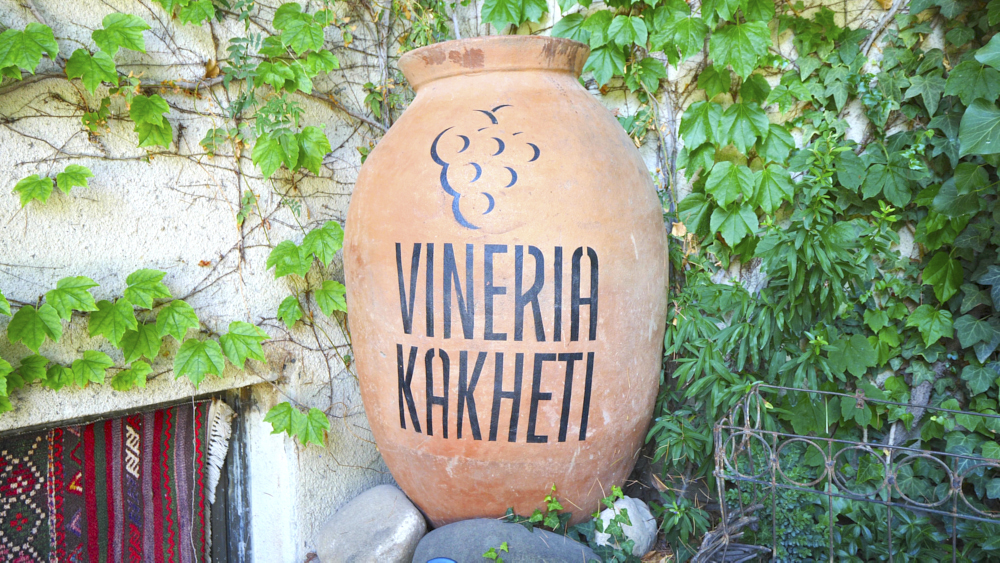 There, I met Andrew, who told me that they make homemade wines and chacha and have a botanical garden. Their botanical gardens are beautiful. They have lots of flowers and rose thorns, greenhouses, a pool that now serves as a makeshift pond, and tables and benches set up among them. 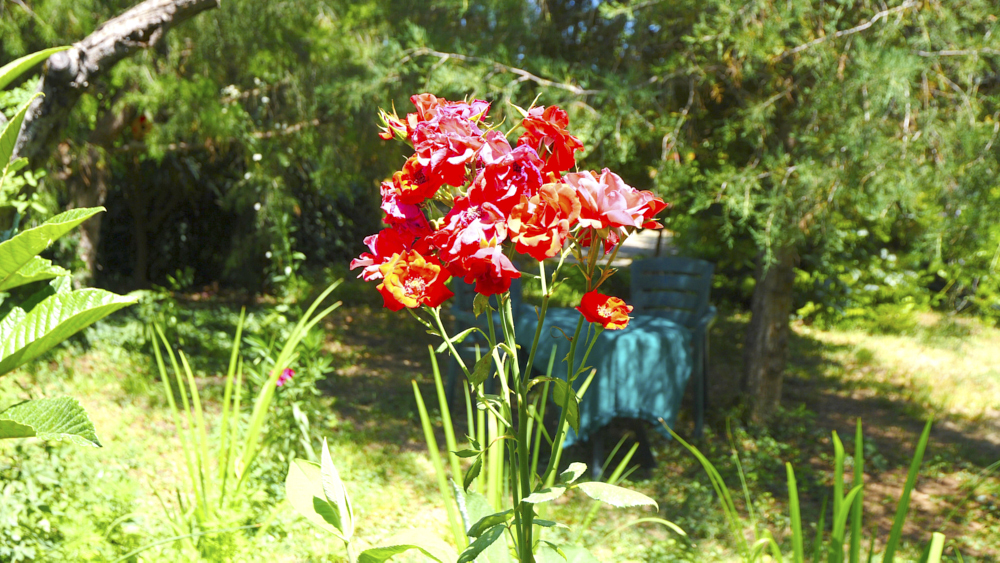 Then, Andrew showed me their marinated peppers, cucumber, marinated garlic, and jonjoli. You chase a chacha shot with them because they kill the burn in your throat! Their chacha was strong, and the pickled jonjoli and pickled pepper were really refreshing! 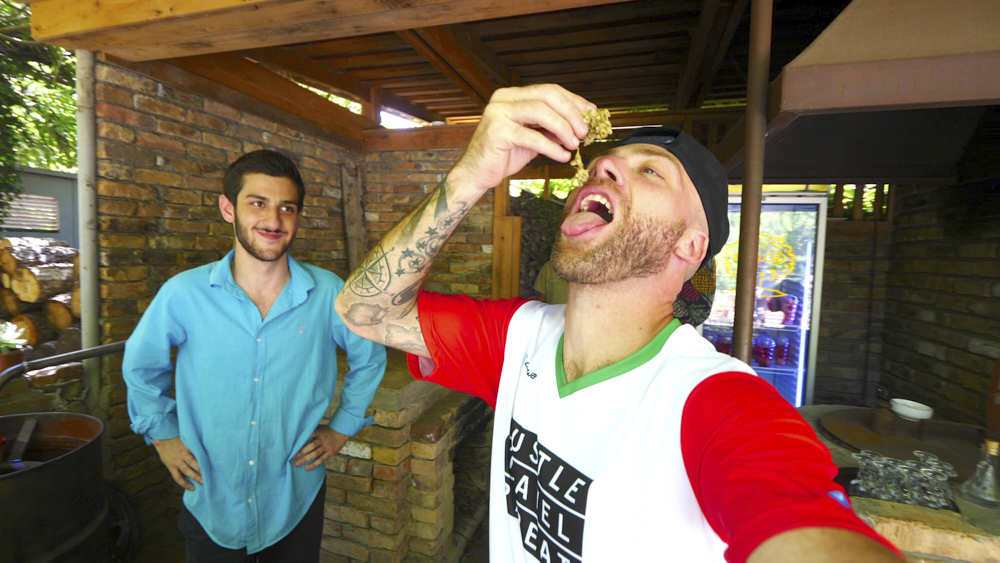 Nothing goes to waste from their winemaking, including the grapevines, which are used as kindling for their barbecue. Then, Andrew took me to their wine shop and their traditional winemaking room. This is also Andrew’s home, and most homes in the Kakheti region have a room like this.

Then, we tried their 9-month-old homemade white dry amber wine. It had a light yellow color and fruity flavor. It becomes more fermented and darker over time. Elsewhere, they have a beautiful map of Georgia, tons of Georgian wines, and a wall that visitors can sign. 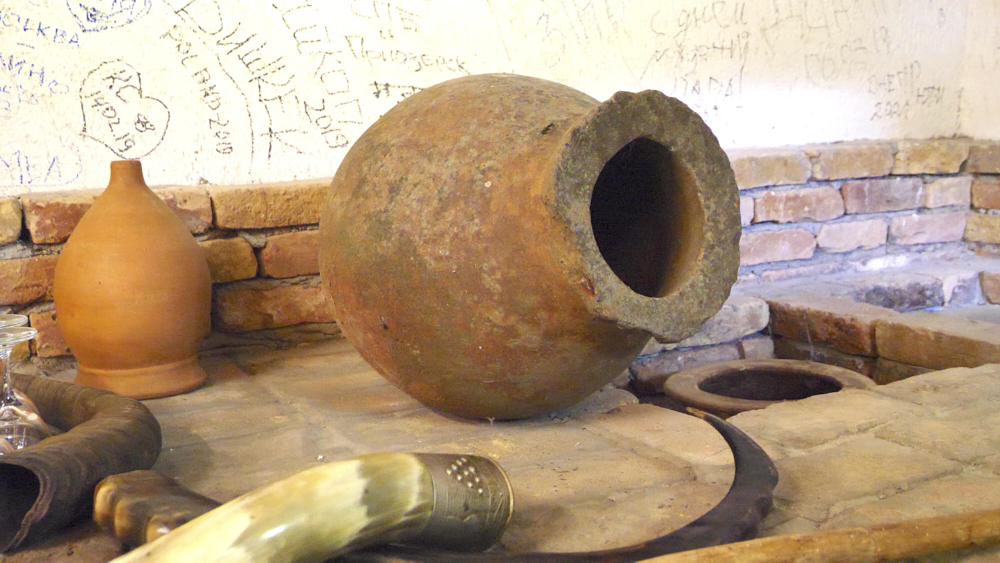 They produce 30-35 wines, as well as brandy, liqueur, and chacha. Then, we saw how they make chacha, or distilled grapes! They light a fire under the pot, put the grape juice in, cover it, and seal it using dry flour instead of a paste. 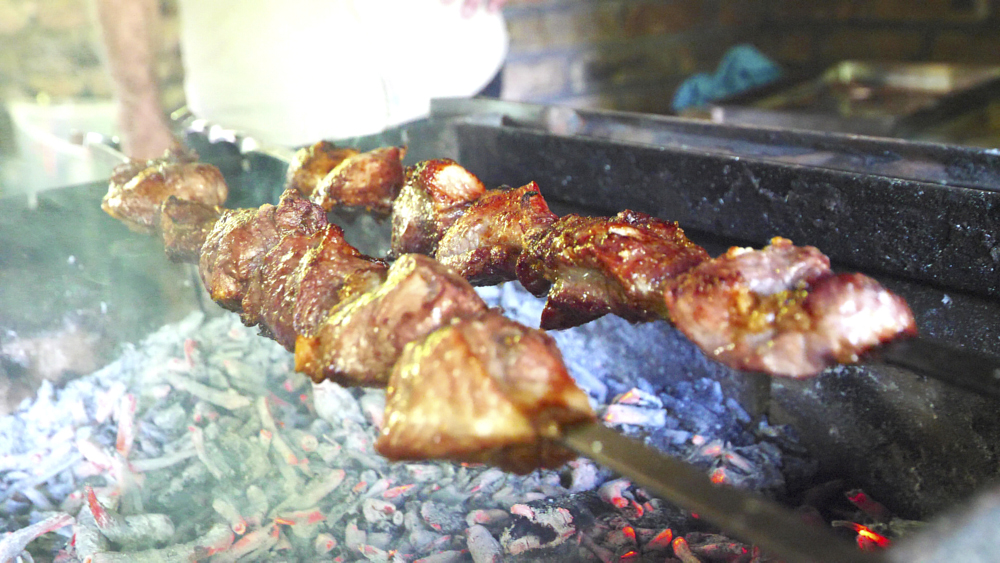 We’d be eating some homemade Georgian barbecue with bread and cheese. We started with some chilled Dugladze Rkatsitel white wine. 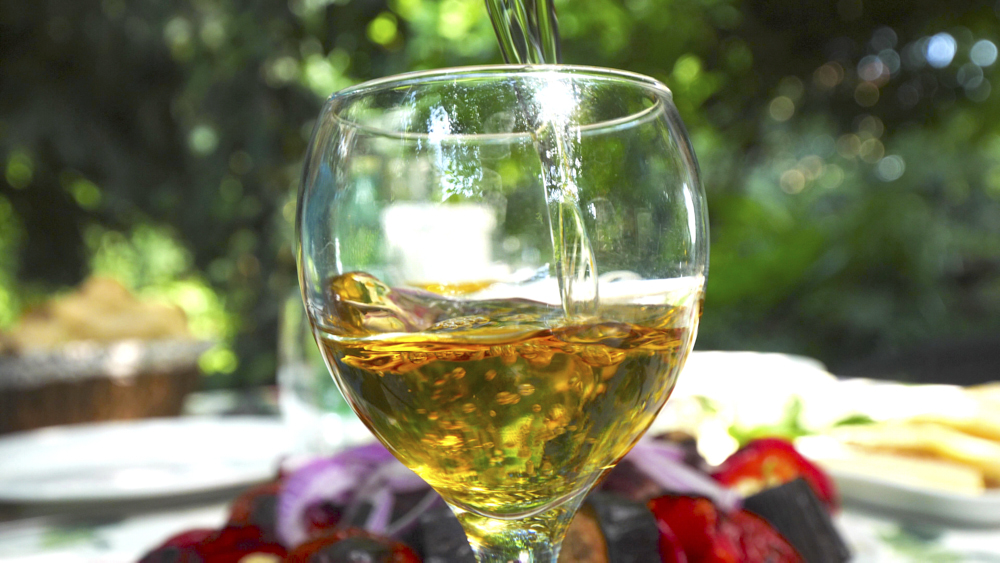 Then, we jumped on the sulguni cheese, barbecued pork, mushrooms stuffed with sulguni cheese, and nadughi (cottage cheese with mint). The stuffed mushrooms were creamy and earthy, and the pork was tender and charred with a nice sauce on it. 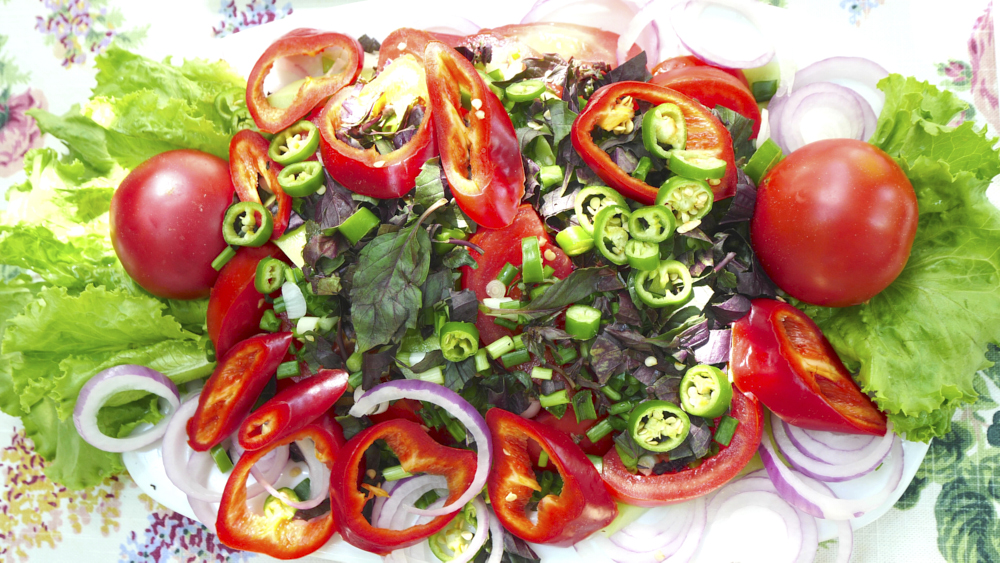 I loved the fresh, unique flavor of the nadughi. The mint was a really nice touch! I also enjoyed the salad, which contained lots of fresh, juicy tomatoes. 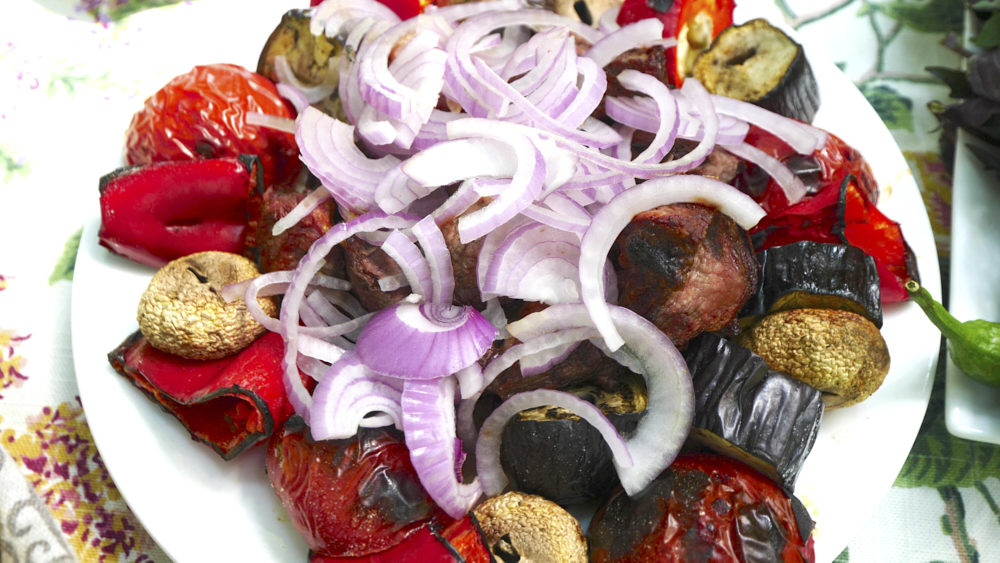 We followed that with fresh figs. Then, after 40 minutes, we went to check on the chacha, which was 90%. They let it sit and the alcohol content starts going down. They bottle it at about 50%.

Back in the shop, I learned that they make Georgian dry wine in clay amphoras. Some of the ones found by archaeologists are 8,000 years old. Georgians were making wine before many other countries were making alcohol at all! 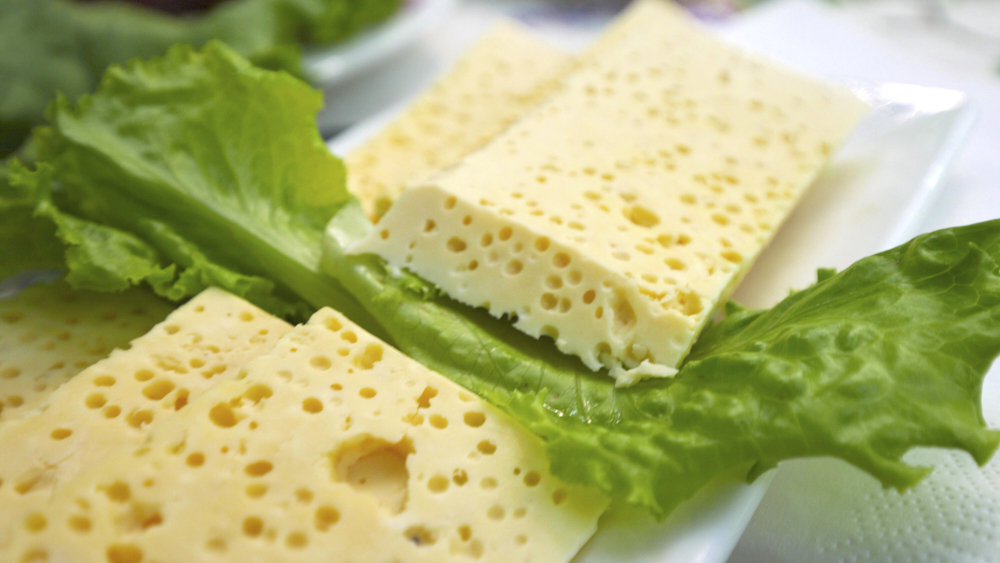 I sampled some Dugladze Kisi Qvevri dry amber wine which was smoother than the one I’d had earlier. The clay jar gives it a unique taste. Then, I saw a bottle of exclusive wine called Usakhelouri, which is the most expensive and exclusive in Georgia. 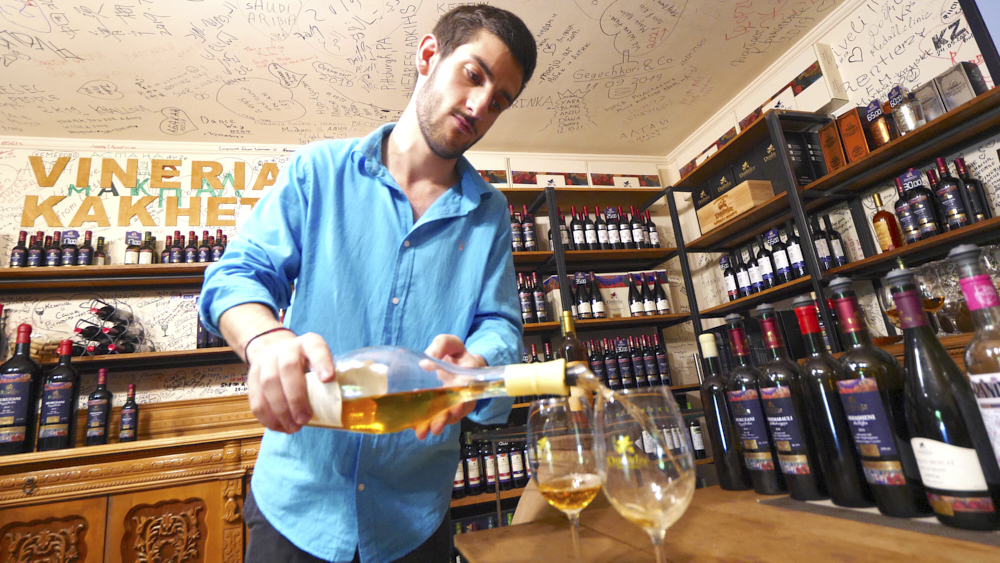 Next was Dugladze Khvanchkara, one of the best semi-sweet red wines in Georgia. It reminded me of a dessert wine. It comes in a bottle that’s half the size of a normal bottle because you shouldn’t drink as much of it. 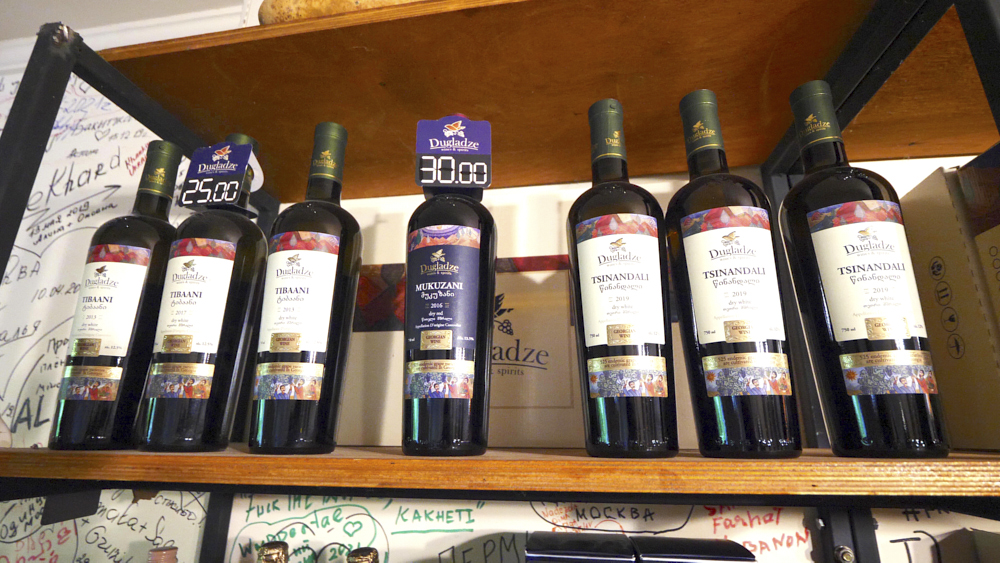 The Dugladze Saperave Reserve dry red was aged in French oak barrels for two years. I loved the oaky aroma and bold, aged flavor. It was my favorite so far. Then, I tried some VS Brandy, which was 40% alcohol and smoother and more enjoyable than chacha. It had a coffee-like aroma!

Next, I signed the ceiling and tried on a traditional Georgian wool coat called a Chokha and the woolen hat. I also held a Georgian knife, which is beautifully carved and the second-most important thing for Georgian men outside of their family. 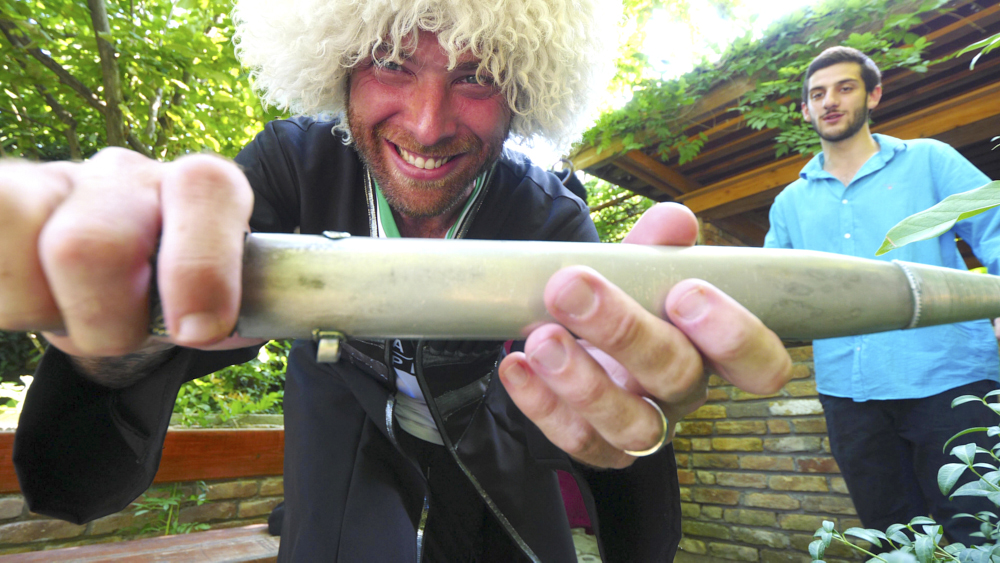 I hope you liked coming with me to try Georgian BBQ and wine in Sagarejo, Georgia! If you did, please give this video a thumbs up and leave me a comment below. Also, please subscribe to my YouTube channel and click the notification bell so you don’t miss any of my upcoming travel/food adventures!