During my visit to Turkey in June 2013, I had the opportunity to experience Cappadocia to the fullest. Between all the history and amazing scenery, it’s hard not to find something to do. For those of you planning to visit Cappadocia, here is my list of top 10 things to do in Cappadocia, Turkey!

10. Visit a pottery workshop in Avanos 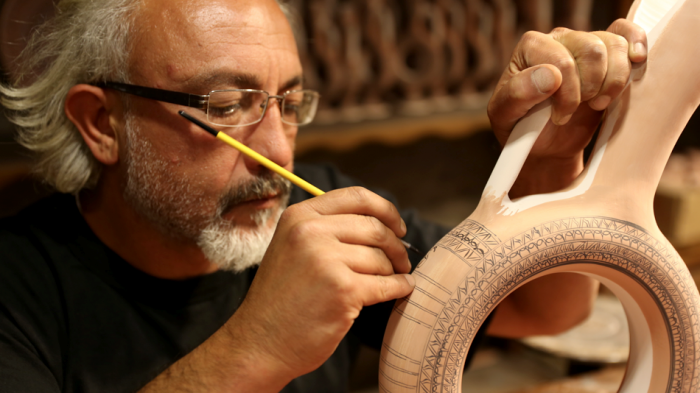 The town of Avanos has been a center for pottery and craft making since the Hittite period, which makes it a fantastic place to purchase handmade ceramics. The Kizilirmak River, or “Red River” runs through the old part of town. It is from this river that the reddish-brown clay is harvested, then used in workshops throughout Avanos. Visitors can watch a pottery demonstration and purchase authentic traditional pieces. Vases, jugs, ashtrays, figurines, and plates are just a few items available. We recommend Firca Pottery because you will be able to see master artists at work, try your hand at the pottery wheel, and browse an extensive inventory of remarkable quality. 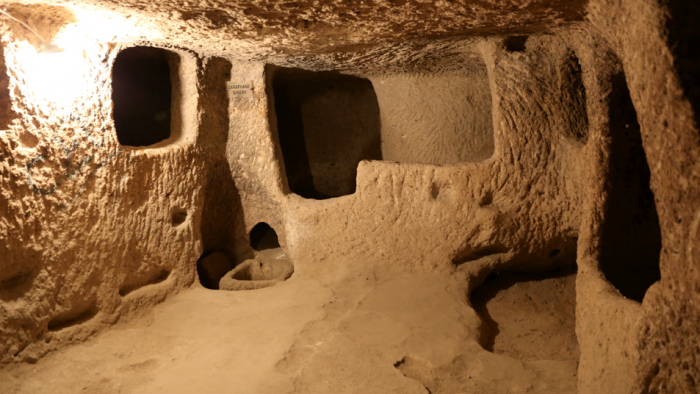 Cappadocia is known for its many subterranean settlements, or “underground cities.” Carved out of soft tufa rock, these cities were meant to provide temporary refuge for the people of Cappadocia. The underground cities are several layers deep, with the sleeping quarters located in the lower levels and the kitchens/ wineries at the upper level. Long passages, narrow steps, and a labyrinth-like tunnel system connected the rooms.

For centuries, people sought shelter beneath ground level using secret tunnels from their homes into the underground cities. During the Roman Era, Christian communities used them to hide from religious persecution. There are several underground cities in Cappadocia, many of which are interconnected with tunnels. We recommend Kaymakli Underground City (UNESCO) to get a general sense of their construction and use.

Check out our episode of the Top Things to See and Do in Cappadocia, Turkey 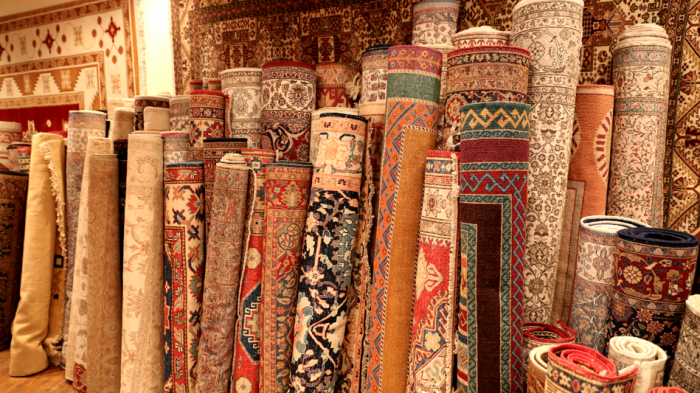 Turkey is famous for its hand woven rugs – a tradition that began as early at 400 B.C., but flourished during the Ottoman Empire. Turkey’s rugs, also known as Kilim, come in all colors, designs, and sizes. It can take days, weeks, months, or even years to finish a good-quality rug. Shopping for rugs in Istanbul can be a headache if you don’t speak the language, which is why many tourists instead prefer to shop for them in Cappadocia where there are less crowds and quieter showrooms. Cappadocia’s rug shops have exquisite collections for a range of budgets. We suggest Gallery Cappadocia in Göreme for their immense, high quality collection and pleasant staff. 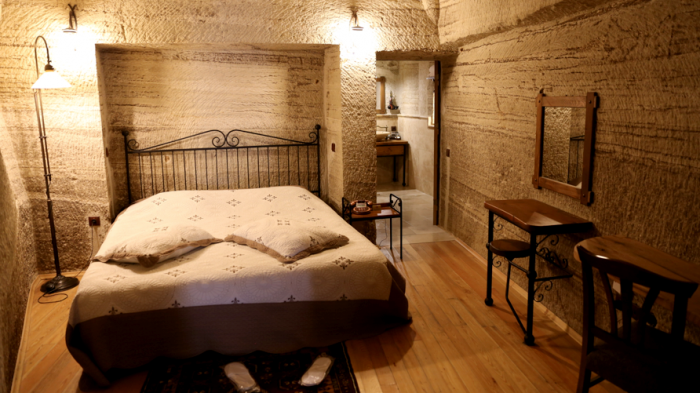 Staying in a cave hotel is a right of passage of sorts for anyone visiting Cappadocia. To sleep much in the same way people have been doing here for thousands of years is truly a unique experience. Many of the cave hotels are converted family homes and are still owned and operated by the families who lived in them. We recommend the Aydinli Cave House for its beautiful rooms, terrace views of Göreme, and friendly service. This is definitely one of our absolute favorite experiences of this list of top 10 things to do in Cappadocia!

6. Hike through a valley 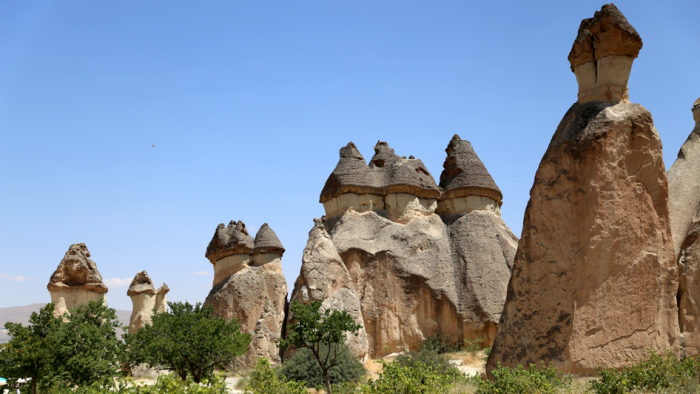 Cappadocia’s valleys have always been home to cave villages and rock monasteries. Each valley has distinct scenery and unique rock formations, which makes them ideal for walking, hiking, and horseback riding. The monks who lived and worshipped in these valleys left behind beautiful churches with vibrant frescos with scenes from the Bible. We suggest Ihlara Valley, Pigeon Valley, Zelve Valley, and Devrant “Imagination” Valley.

5. See the three beauties of Ürgüp 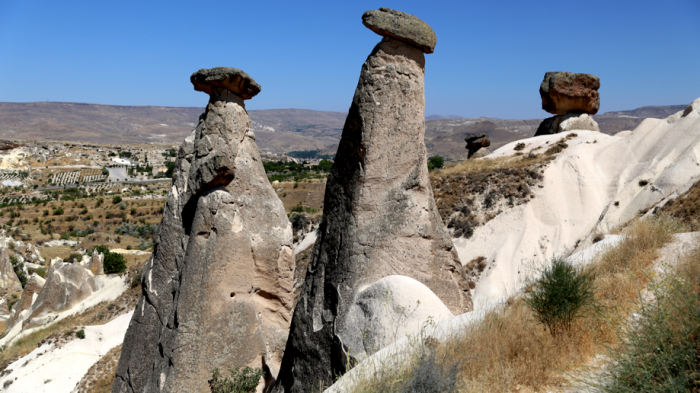 Like Göreme, Ürgüp has been an important place in Cappadocia. Here archaeologists have unearthed Roman tombs, Byzantine tombs, and Byzantine-Era rock monasteries. When Ürgüp became part of the Ottoman Empire in 1515, many buildings were erected including mosques, churches and libraries. In addition to a fascinating history, Ürgüp has three of the most remarkable fairy chimneys in Cappadocia, known as the “three beauties of Ürgüp.” They are located along the highway from Göreme to Ürgüp, so they are not hard to spot, 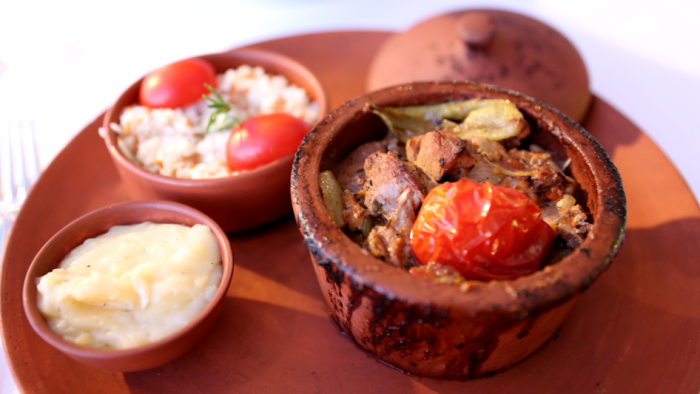 Let’s be honest, food is a big deal while traveling. Lucky for all of us, Turkey is a gastronomic epicenter, and Cappadocia is no exception. One of the most traditional meals here is a clay pot dish. The concept is a simple one: fill a ceramic pot with meat, vegetables and spices, seal it, and bake it until its cooked through and all the flavors are melded. The finished product is a tender stew of delicious flavors. Clay pot dishes take some time to cook, so reserving ahead is your best bet. Pots come with lamb, beef, chicken, or vegetables and are usually served with a side of rice pilaf. We tried many forms of the clay pot dish, with each restaurant claiming theirs was the best. I highly recommend Dibek Restaurant (+90 384 271 2209) and Sedef Restaurant (+90 384 271 2356). Both are located in Göreme. 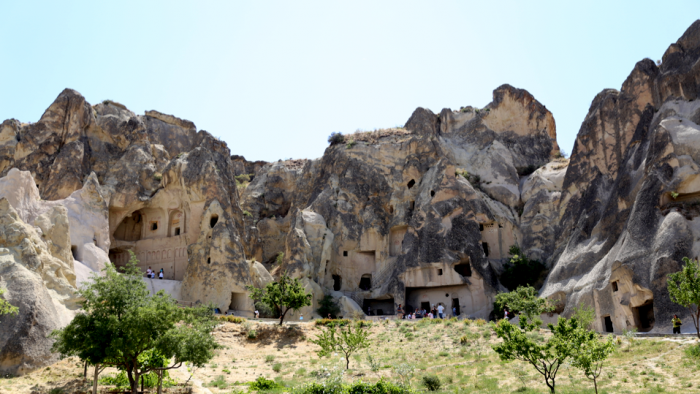 By the 2nd century, a large Christian community had formed in Cappadocia. By the 4th century, Saint Basel had founded various religious settlements in the area. The Göreme Open Air Museum is a testament to St. Basil’s influence – it is a place where daily worship was carried out in seclusion. There are various 10th, 11th, and 12th century rock churches with magnificent frescos, with the most impressive one being Tokali Church, located about 50 meters outside the entrance to the park. The Göreme Open Air Museum is a UNESCO World Heritage Site. Entrance is 15 TL per person. We advise visiting in the early morning to avoid the heat. 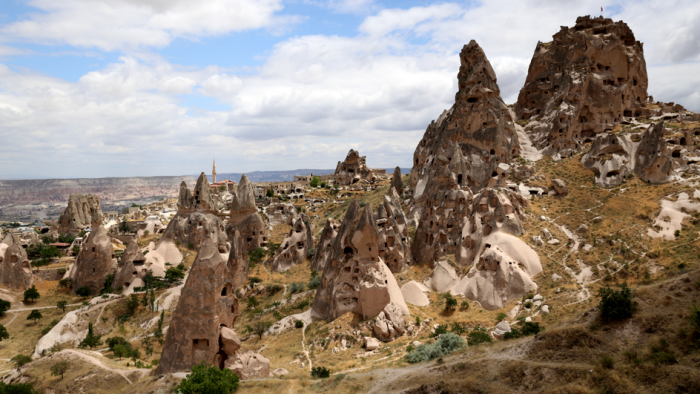 Uçhisar is the most elevated town in Cappadocia and home to the Uçhisar Castle. From here, there are wonderful panoramas of the surrounding clusters of fairy chimneys, Ürgüp, and Avanos. The castle has hand carved rooms and is accessible by a flight of stairs. Entrance is 5 TL. Another attraction near Uçhisar is Pigeon Valley – a popular route for hikers.

Check out our episode of Hot Air Ballooning in Cappadocia 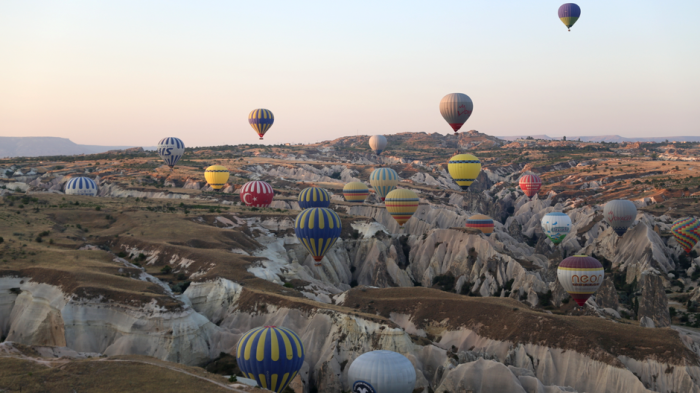 Last but not least, visitors should not miss out on experiencing Cappadocia from the sky! This remarkable experience will set you back about $250, but it is well worth it to see the spectacular region from above. The valleys, towns, mountains, and crags will look like miniatures when you are soaring above it all. Tours generally last for one hour and transportation to and from your hotel is provided. After a light breakfast at 5:30 a.m., you’ll board the balloon basket, and you will be up, up, and way! We recommend Kapadokya Kaya Balloons for their impeccable safety record and wonderful pilots.

What are some of your favorite things to do in Cappadocia? Leave us a question or comment below!

21 thoughts on “Top 10 Things to Do in Cappadocia, Turkey”