The city of Braga, located in northwestern Portugal, is the oldest Portuguese city in the country’s verdant Minho region. Braga is home to more than thirty churches, but its religious significance is most certainly not a 21st century occurrence. In the 12th century, Braga was considered the religious capital of Portugal. Years of Christian influence undoubtedly have shaped Braga into what it is today; a charismatic combo of ancient and modern, with tons of baroque flair. Here are my top picks for what to see and do in Braga, Portugal. 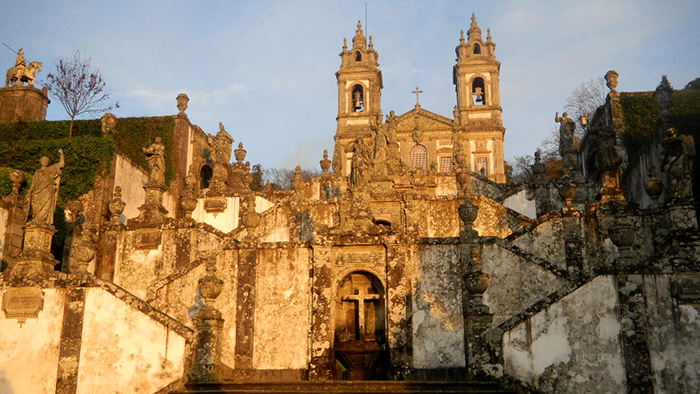 The ancient Romans took particular interest in the Minho province and used the area as the administrative center for their province Gallaecia, which included various cities along the northwestern Iberian Peninsula (modern day Spain and Portugal). Braga’s history reads like that of so many other cities in the Iberian Peninsula. It was under Arab control during the 8th century before being seized in 1040 by Ferdinand I of León and Castile. 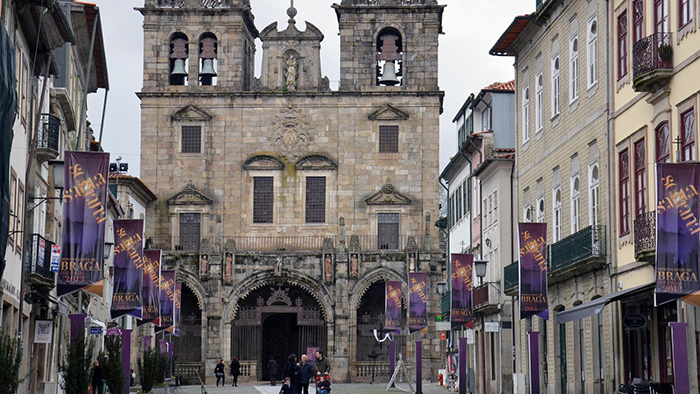 Beginning in the 16th century, Braga underwent several architectural modifications, expansions and improvements. The city was transformed from medieval town to baroque beauty in less than 200 years with the help of its affluent archbishops. For this, Braga has been nicknamed “the Rome of Portugal.” It is a place where architecture enthusiasts can take in centuries of urban growth and revival.

Braga is the third largest city in Portugal after Lisbon and Porto. The city’s animated street side cafés, art galleries and bars are the telltale signs that hundreds of students from Erasmus Minho University and The Catholic University of Portugal live, study and play in this city. 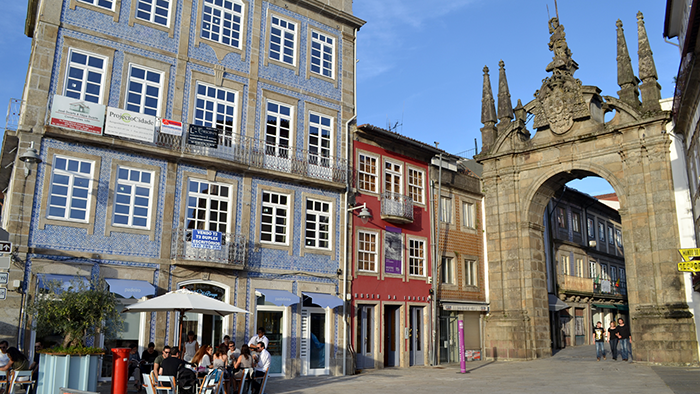 Only 195 miles from Porto, Braga makes the perfect weekend getaway for food, architecture and design enthusiasts alike. Not surprisingly, Semana Santa, or Holy Week has become a popular time to visit. The festivities provide a rare glimpse into the area’s unique Christian traditions and storied past. If you plan on coming during this time, you should book accommodations well in advance. Also keep in mind that while most monuments remain open, many private businesses close during this time in observance of religious holidays. 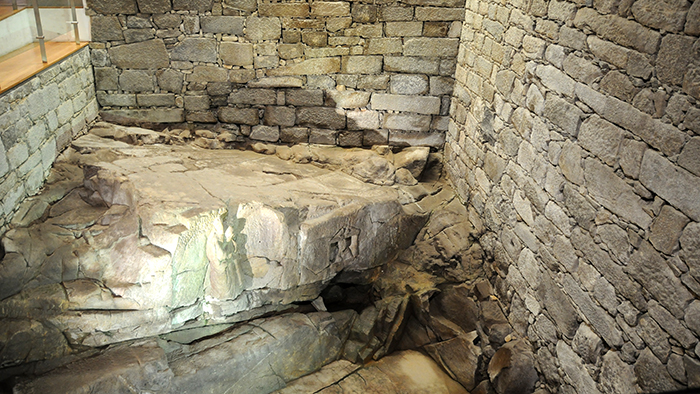 Be warned: Braga’s summers are hot, and I mean hot! Temperatures in May through September can reach the upper 90’s, and it is not uncommon to experience triple digit temperatures during July, August and September. 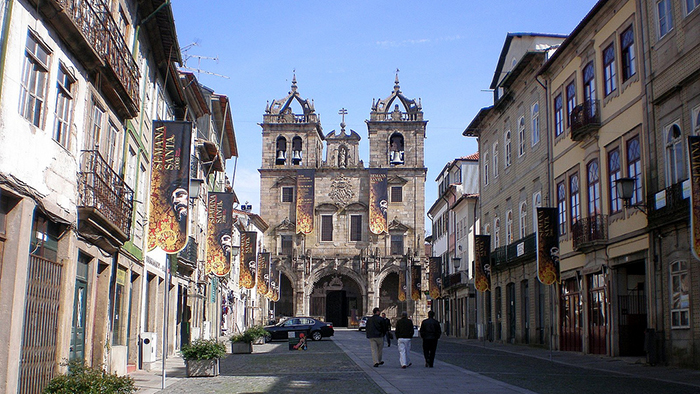 Each brick was used in the construction of dozens of churches. It was during this period, between the 16th and 17th centuries, that the town underwent a dramatic change. The streets were widened, constructions were added, and Braga ultimately made the transition from Medieval town to Renaissance city under the guidance of its affluent bishops. There are a number of significant Roman and Christian constructions that visitors can still see to this day. Many of which are notably well-preserved or have been restored to the glory of their heyday. It makes the perfect weekend getaway for any appreciator of architectural history and good food.

Check out our article on The Monasteries of Portugal: Fatima, Batalha, Alcobaca, and Tomar

The Braga Cathedral is one of the most significant monuments in the Minho region and in all of Portugal, not only because of its architectural features, but also because it is regarded as a symbol of the city’s long-standing Christian tradition. 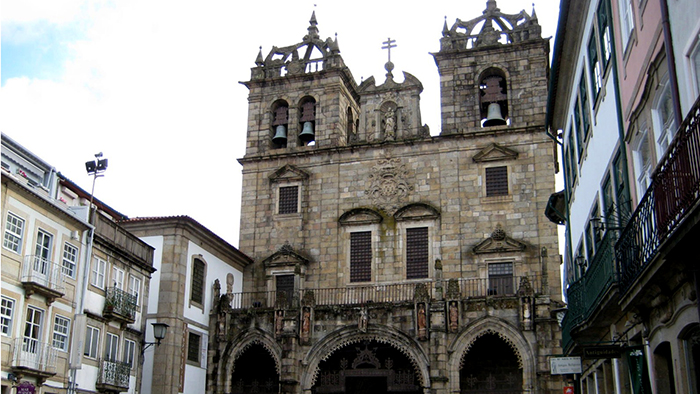 The Catholic Diocese of Braga is one of the oldest in Western Europe, and no monument illustrates the city’s religious history quite like the Braga Cathedral. The building’s exterior features a large statue of the Virgin Mary and child amongst Romanesque arches and reliefs of animals and people. Visitors will also notice a gothic-style canopy entrance complete with on looking gargoyles. The interior of the Cathedral is rich with baroque and Romanesque design elements, an ornate high choir, and several chapels containing the tombs of Braga’s archbishops and members of the Portuguese royal family. Entrance to the cathedral is free.

Our Lady of the Tower Chapel

On the morning of November 1st, 1755, thousands of people in Lisbon and the surrounding cities awoke to the earth shaking violently beneath them. The Great Lisbon Earthquake destroyed much of the city and killed nearly 70,000 people. Seismologists now believe that it was a 9.0 on the MMS scale, making it one of the most powerful earthquakes to ever hit Western Europe. Lucky for the residents of Braga, the earthquake’s impact was not felt in the north, and they thankfully were spared the destruction it brought to much of the country. Attributing their escape from disaster to the grace of the Virgin Mary, Our Lady of the Tower Chapel was constructed in 1759 by architect André Soares. It is a charming, open-air, baroque-style sanctuary that features a bell tower. 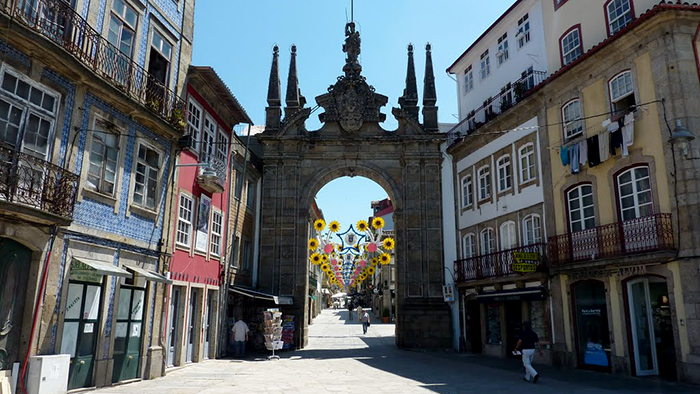 Arco da Porta Nova is a 14th century triumphal arch located along the western medieval wall of the city. Once used as a symbol for and an entrance into the city, the arch now stands nestled between modern commercial buildings. Architect André Soares, as per the request of Archbishop Gaspar de Bragança, redesigned the arch in baroque style. The western façade of the arch features the coat of arms of Archbishop de Bragança, while the eastern façade commemorates Our Lady of Nazareth in a recessed depiction. 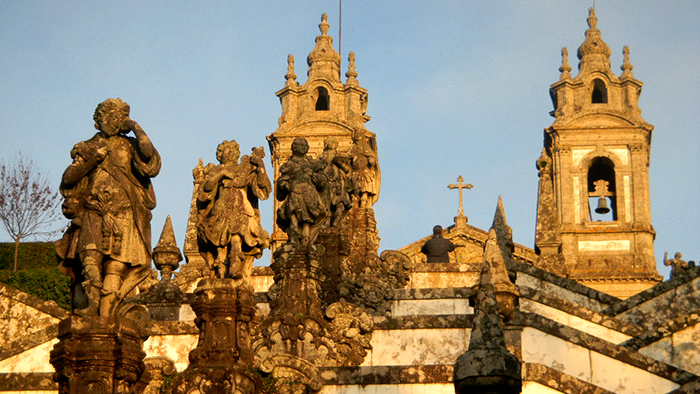 Bom Jesus do Monte, or Shrine of Good Jesus of the Mountain, is a must-see attraction located on a hilltop just three miles (4.8 km) southeast of Braga. It has been a Catholic pilgrimage site since Archbishop Rodrigo do Moura Telles commissioned it in 1722 for the faithful to walk the Stations of the Cross. The site was completed in 1811, and is still used by the faithful and penitents alike for contemplation. Some people walk the stations on their knees during Holy Week. 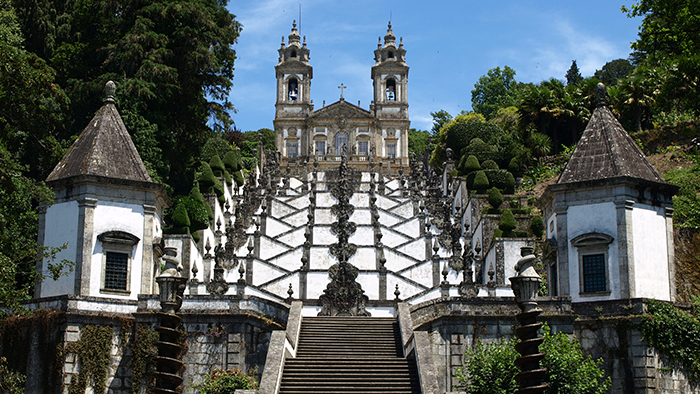 At the top of the hill, past the grottoes, fountains and gardens along Sacred Way (long double staircase) is the baroque-style basilica. From here, visitors can gain a captivating, sprawling view of Braga from 400 meters above sea level. You can get to Bom Jesus do Monte by taking the four-minute funicular for €1 or by driving. The site is open daily from 7:30 a.m. to 8 p.m. Admission is free. This baroque-style basilica was completed in 1811 and boasts grottoes, fountains and gardens lining the long double staircase leading to the top, known as the Sacred Way.

Fountain of the Idol 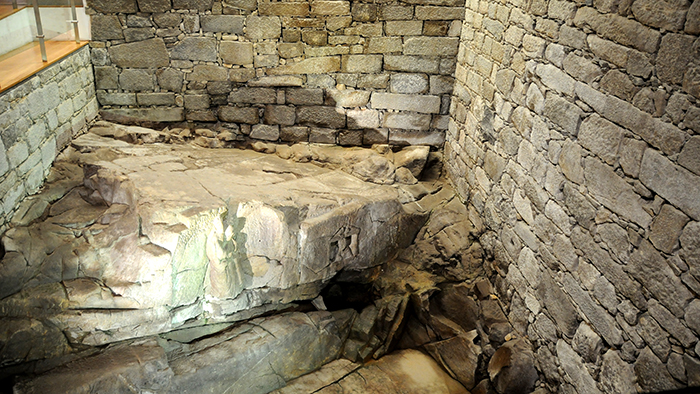 Did you think you would come to Braga and not see any sign of the ancient Romans who once inhabited the area? I hope not. The Fountain of the Idol was built during the era of Emperor Augustus sometime during the first century. Unfortunately, it is the last remaining monument of Braca Augustus, the ancient capital of Gallaecia. It is located in downtown Braga on historic Rua do Raio. The fountain features a carved granite rock with inscriptions in ancient Celtic. It is thought to have been built as a shrine to the god, Tongoenabiago. The fountain was once part of an ancient temple complex located on the site. 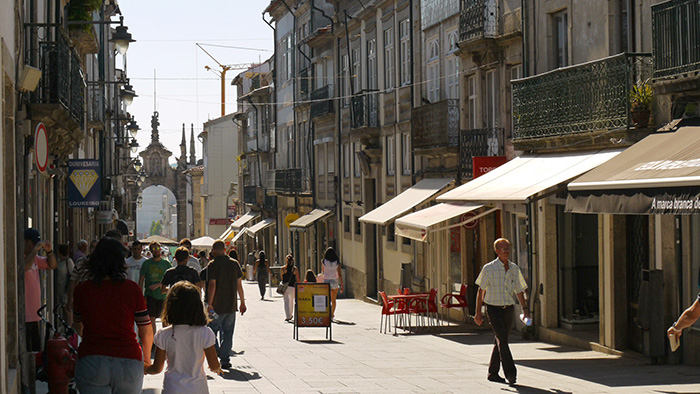 All roads lead to Asturica Augusta. Raio Street is the starting point of what was once the Roman road that led to Asturica Augusta (modern-day Astorga, Spain). It begins at the Arco da Porta Nova, and winds its way through the entire historical center, all the way to Praça da República. Along the way are numerous shops, restaurants and cafes. Palácio do Raio, a mid-eighteenth century palace is also located along Rua do Raio. It is a baroque-style civil building commissioned by a wealthy merchant and designed by architect, André Soares. 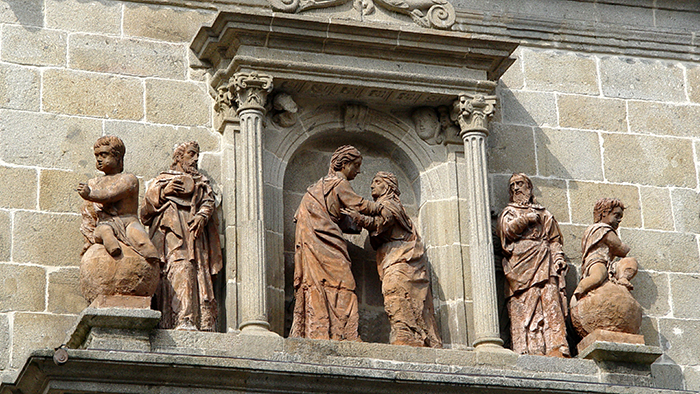 According to the inscription at the entrance, the Misericórdia Church was built in 1562. It was commissioned by Archbishop Diogo de Sousa to be a chapel for the Brotherhood of Mercy. It is considered to be the most important structure from the Renaissance period in Braga, making it a popular site for history and art buffs. The church was renovated several times during the 18th and 19th centuries due to the money paid forth by some of the Brothers of Mercy who wished to be buried there. They paid for elaborate remodeling projects by sculptors, painters, carpenters and tile-makers. Today, the church features a Renaissance-style north façade, gilded altarpieces, hand-painted tiles, vibrant stained glass windows and dozens of original works of art. 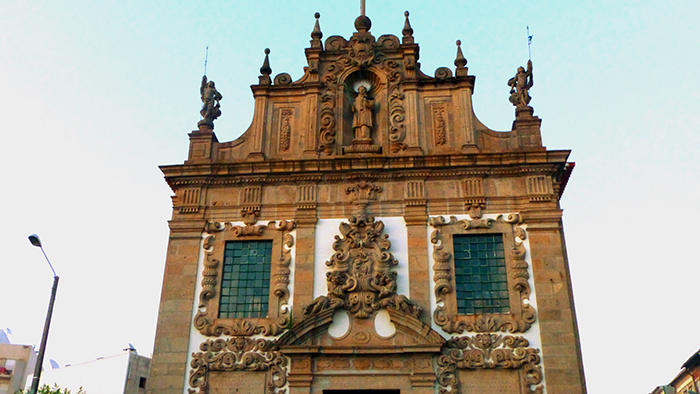 The 16th century Saint Vincent Church is the oldest authentic Christian monument in Braga. It is a baroque-style Catholic Church that was built in 1565 in honor of Saint Vincent of Saragossa, the patron saint of Lisbon. It was built atop the site of a Visigoth temple. Inside the sacristy, there is a Visigoth inscription on an ancient headstone that reads, “Here lies Remistuera, since May 1 of 618 days from Monday, in peace, Amen.” The inscription is the first recorded reference to Monday being named the first day of the week. The façade of the church features a statue of St. Vincent, reliefs of Christ’s baptism and a Papal cross. The interior features an altar from 1721, an organ from 1769 and choir balconies designed by Carlos Amarente. The Saint Vincent Church is located about a ten-minute walk from Hotel Bracara Augusta. 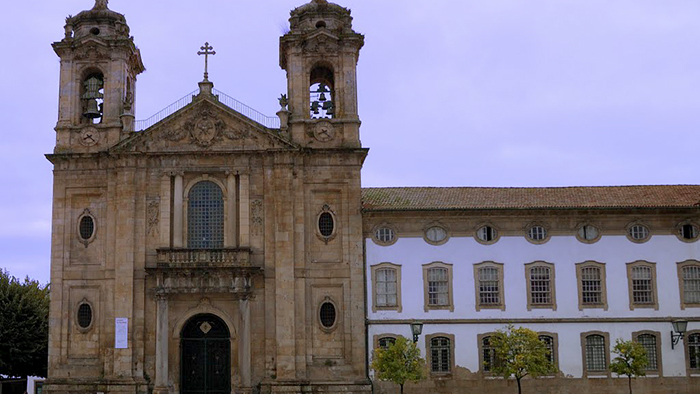 Braga’s Pópulo Church is a neoclassic structure designed to invoke the Virgin Mary glorified in Rome’s Pópulo Church. It was originally part of a convent that was dedicated to the Virgin of Santa Maria del Pópulo in Rome. Commissioned by Archbishop Frei Agostinho de Jesus in 1596, Pópulo Church became a neoclassical landmark of the city when it was finished almost 300 years later with the help of architect, Carlos Amarante. The church’s interior is most exquisite and features architectural elements from various styles including mannerist, neoclassical and baroque. Dozens of delicate blue and white hand-painted Portuguese tiles adorn the walls of the church. The remains of Archbishop Frei Agostinho de Jesus were transferred here in 1628. His tomb is housed in the main chapel. 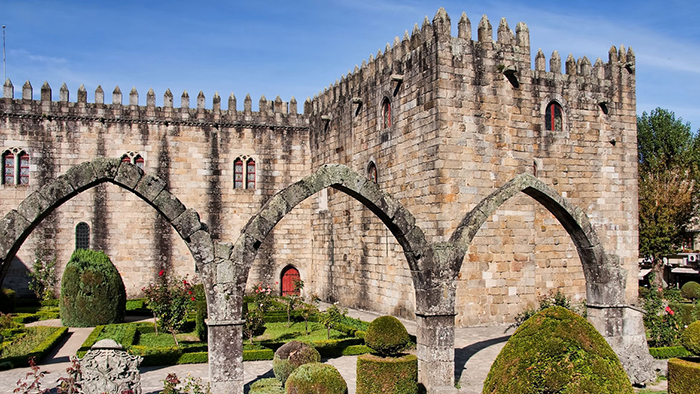 Located close to the Braga Cathedral, the Archbishop’s Palace consists of three separate buildings, the eastern, western and southern wings, each of which is from a different period. The eastern wing is in medieval gothic style, and dates back to the 15th century. It faces the beautifully manicured Santa Barbara Garden. The baroque-style west wing faces the Municipio Square of Braga, and was built in the 18th century. The southern wing is a collection of various buildings from the 16th, 17th and 18th centuries. There is a small plaza with a fountain located just outside this wing. The palace houses the Public Library of Braga as well as the District Archive.

Other places of interest in Braga

Palácio do Raio, or Casa do Mexicano, is an 18th century palace built by one of the city’s wealthy merchants, João Duarte. Like other buildings in central Braga, the palace was designed by architect André Soares. It captures baroque elegance and class. The over-the-top residence was eventually sold to another wealthy businessman, Miguel José Raio, which is how it got its name. Palácio do Raio is considered one of André Soares’ most important works.

A public garden with a fountain of Saint Barbara located near Paço Episcopal Bracarense.

A 7th century Visigothic temple. It is arguably the most significant pre-Roman structure on the Iberian Peninsula. Entering is prohibited.

What are your recommendations about what to see and do in Braga? Leave us a question or comment below!

One thought on “What to See and Do in Braga, Portugal”