The ancient city of Volubilis is the greatest proof of the fact that the Romans inhabited once the lands of Morocco. This dramatic Roman site, breathtaking through its grandeur and well-preserved ruins, is situated only two-hour drives from the capital of Morocco, Rabat. So, next time you’re in Morocco you should consider introducing Volubilis in your itinerary, besides the splendid beaches and medieval markets of the country, and discover the 2,000 years old stories of Morocco. The ancient roman city of Volubilis, Morocco will surely make an impression on you! 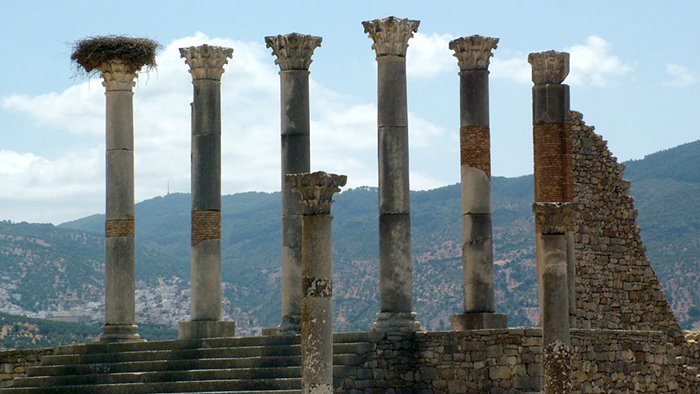 The ancient city of Volubilis is situated at the foot of the Atlas mountains, surrounded by olive and almond trees. The nearest modern town is Moulay Idriss. Since 1997, Volubilis is a UNESCO World Heritage Site.

Initially, this site was a Carthaginian settlement founded in the 3rd century BC. The Romans arrived here around 25 BC and developed the settlement into a thriving town. The prosperous period of Volubilis started during the reign of Juba II, a Berber prince appointed by the Roman Emperor Augustus as the ruler of the region. Juba II was married to the daughter of Marc Anthony and Cleopatra. 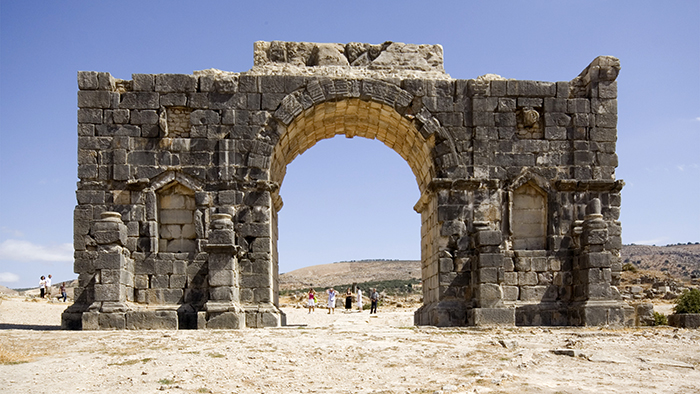 After the successor of Juba II was murdered by the Roman Emperor Caligula for the crime of wearing a robe too beautiful, Morocco became the Roman province of Mauretania Tingita. The city was home to mansions and Roman houses, a forum, a triumphal arch, temples and public baths. The inhabitants of Volubilis were quite diverse, here living from Africans and Syrians to Spaniards and Jews. The population of Volubilis numbered about 20,000 inhabitants during the golden age of the city.

Check out the Roman Ruins of Portugal 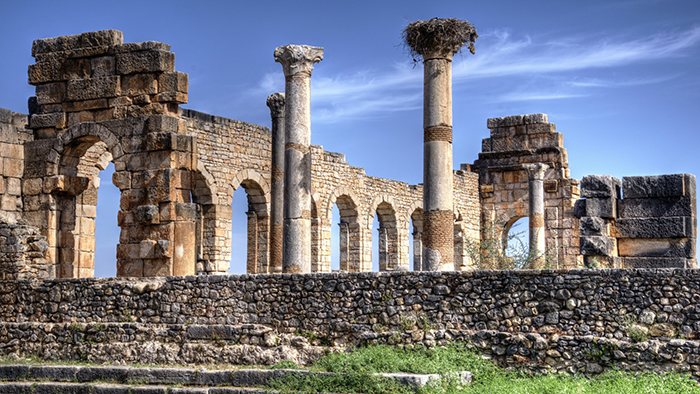 In 40 AD, Volubilis became a municipium of the Roman African region of Mauretania Tingita. When the Roman Emperor Marcus Aurelius Antoninus, also known as Caracalla, ruled the empire, in about 168 AD, the city received its fortifications. 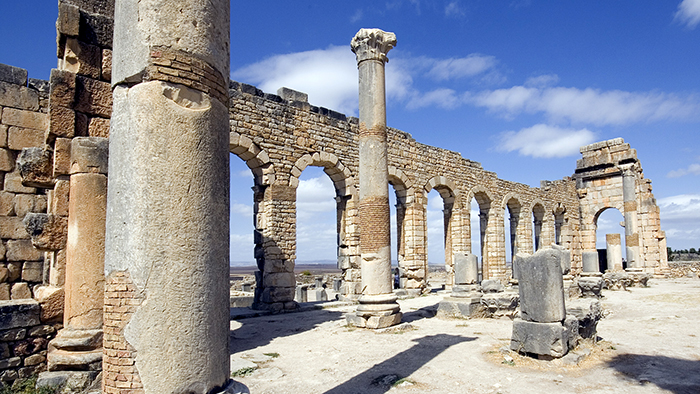 The fertile lands of this province were a source of grain and olive oil, and were exported to Rome. Volubilis was also a final stop of the Roman imperial roads that crossed France, Spain, the Morocco’s northern city, Tangier, and eventually reached Volubilis. Christianity was practiced in this region, and Latin was the language spoken by the Greeks, Syrians and Jews that were living in Volubilis. 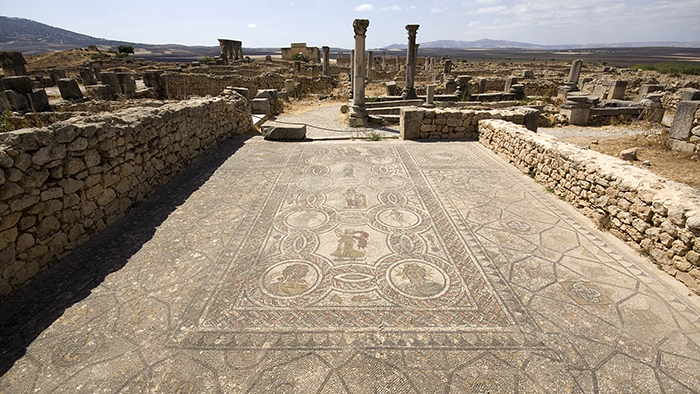 However, the Romans had a hard time getting along with the Berbers. Although they brought the cooking utensils, sundial and the olive press into Morocco, helping the local economy, the Berbers were against the exploitation of their lands by the Romans. Finally, after 300 years of quarreling with each other and once the Roman Empire started to crumble, the Romans left Morocco.

Check out the Neolithic Sites in Europe

Once they took control of the city, they managed to live in peace and harmony with the Greeks, Syrians and Jews that lived on these lands, until the sultan Moulay Ismail came into power. Visitors from all over the world meet on the lands of this city to explore the ancient past of Morocco. Each June, this site becomes the scene of the Fes Festival of Sacred World Music. 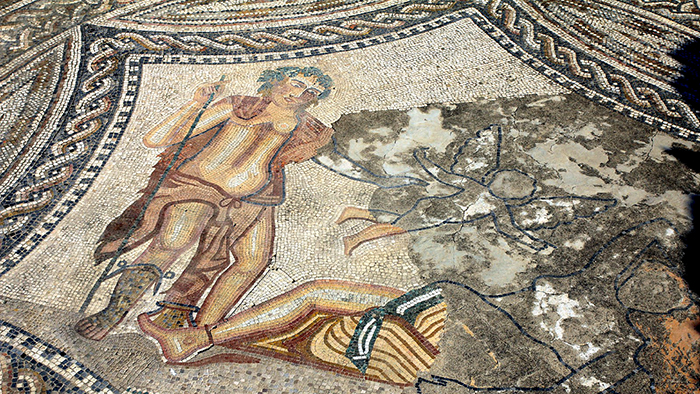 Volubilis is covered in splendid remains of the Roman world that used to dominate this site 2,000 years ago and tourists will have the chance to admire from several sections of the Roman walls that surrounded the city and massive columns, to remains of altars and temples and splendid mosaics. On-site there is also an aqueduct, a basilica, the Capitol and a spectacular triumphal arch. 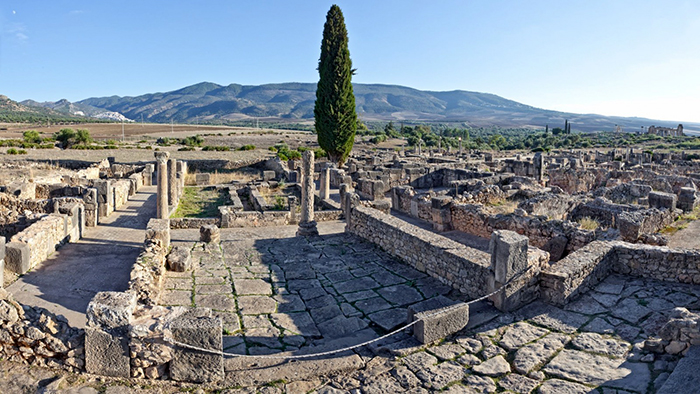 The triumphal arch visible today in Volubilis is dedicated to the Roman Emperor Caracalla, who in 212 AD offered Roman citizenship to all the inhabitants of the Roman Empire. This arch was built in 217 AD, upon the death of the emperor, and used to mark also the beginning of the main street of the city. Known by the Romans as Decumanus Maximus, this was the most luxurious street in Volubilis, a destination lined with shops and lavish villas that still boast impressive mosaics. 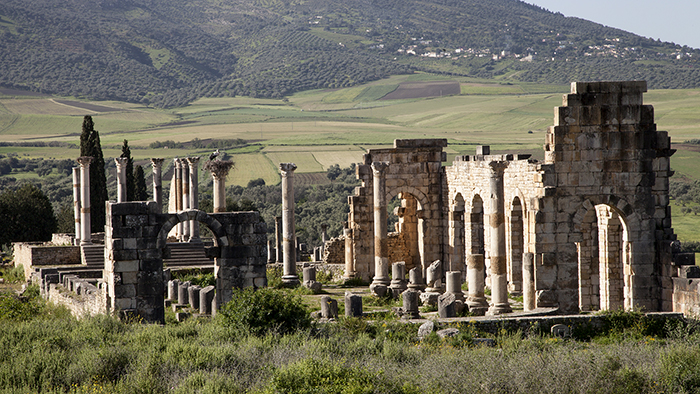 One of the most notable structures in the city is the House of Orpheus that is adorned with a massive mosaic floor which depicts Orpheus singing at his harp while charming wild animals. The house has also a mosaic that illustrates dolphins playing through the waves. Another villa is decorated with a mosaic depicting nymphs that carry off Hylas, the son of Hercules.

Check out 10 Ancient Sites in Bulgaria You Can’t Miss 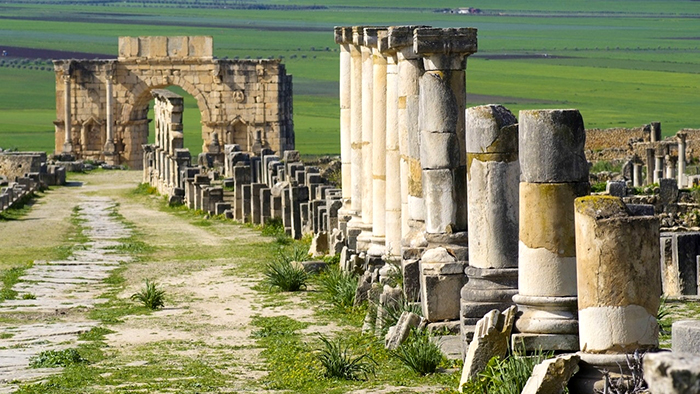 Visitors will also get to see a mosaic which tells the story of the hunter Acteon who surprises the goddess Diana bathing, a story with a tragic ending since the hunter is transformed by Diana into a stag and ends up killed by his own dogs. Everywhere you look, you will discover fragments of mosaics illustrating the Greek and Roman gods of wine, Dionysius and Bacchus, which means that the inhabitants of Volubilis were for sure passionate about their grapes, especially when turned into wine. 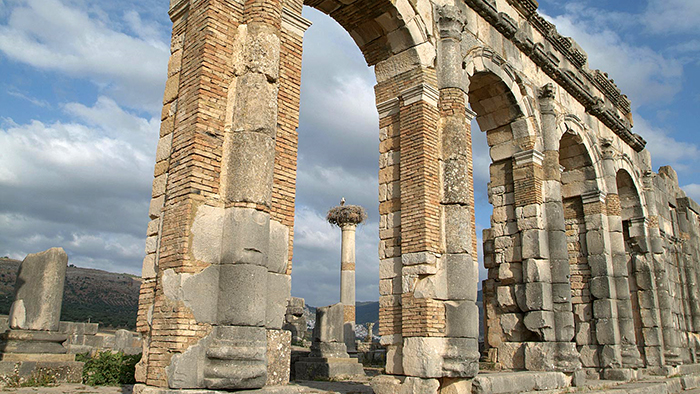 Above the House of Orpheus, visitors can find the colored ruins of the Capitol and basilica, the main public buildings of the city. The wealth of the city came not only from its olive orchards and wheat fields, but also from the export of wild animals that were sent to be killed in the Coliseum of Rome. This is why, in just 200 years, animal species like the Barbary Lion and Atlas Bear disappeared.

Check out Four Ottoman Bridges in Bosnia and Herzegovina 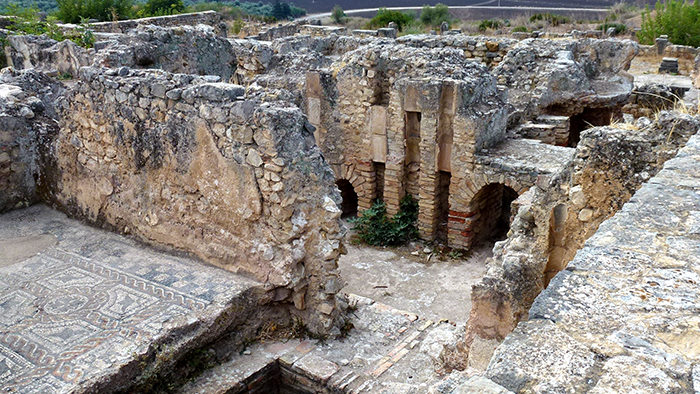 It seems that this ancient city was in a spectacular state until the 18th century, when the Sultan Moulay Ismail transformed the site in a quarry for building materials for his grandiose palace in Mekness, situated nearby. If you want to capture a panoramic view of the Roman city of Volubilis, you should stand on one of the two twin hills of Moulay Idriss, the white washed town located in the vicinity of this site.

Did you enjoy our article of the Ancient Roman City of Volubilis, Morocco? Leave us a question or comment below!

One thought on “The Ancient Roman City of Volubilis, Morocco”