As my epic adventures in the South American jungles of Suriname continued, I enjoyed a delicious Surinamese jungle breakfast and then went on a trek along the Suriname River! Come along with me on my latest Surinamese adventure! 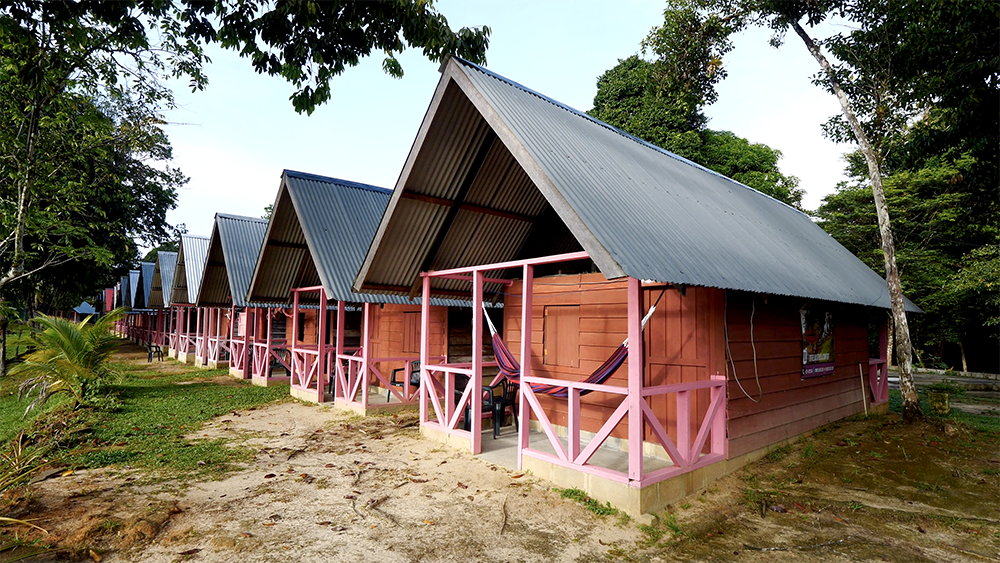 My day began where it ended the previous day, on Isadou Island in the interior of Suriname. On the island is an awesome resort with 28 bungalows, which have private bathrooms and porches with hammocks! I slept so well under my mosquito net overnight with the sound of the flowing river, but it was time to get my day started. My first order of business was getting some breakfast!

I joined my boy Imro from Jenny Tours and headed back to one of the open-air dining areas, where our Surinamese jungle breakfast was waiting for us. Our options included casaba bread, scrambled eggs, cucumber, tomatoes, and a grapefruit-like fruit. There’s also a  Nutella-like spread, butter, and peanut butter for the casaba bread. I went for everything except the cucumber and spreads and also got some hot, strong coffee! 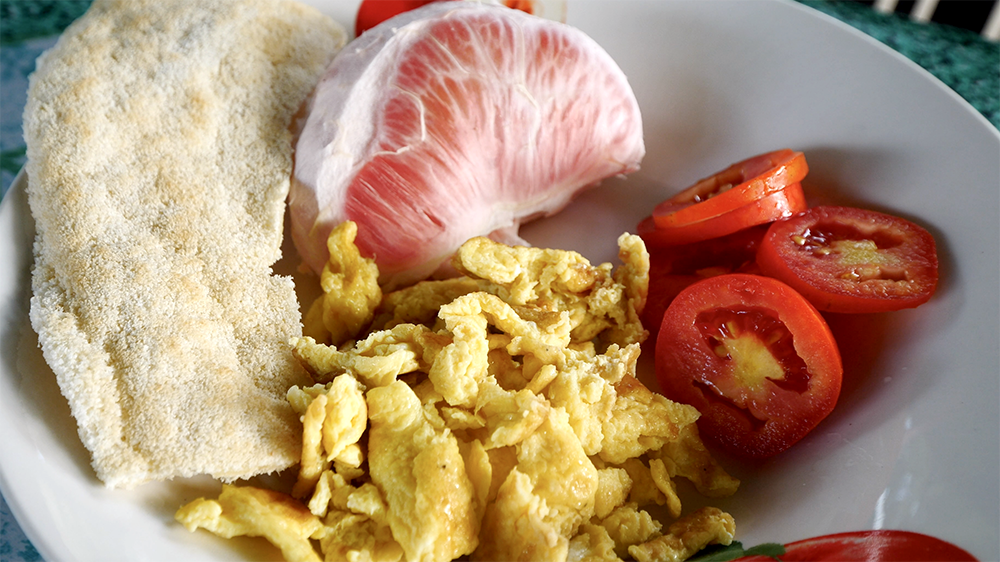 The eggs were really nice. I liked it with the casaba bread and fresh tomatoes. The bread is as hard as a rock, but it’s good! Then I went with the grapefruit, which was very tangy and fleshy. It was so tasty and filling and was the perfect thing to get me through the next few hours. It was a fantastic Surinamese jungle breakfast! 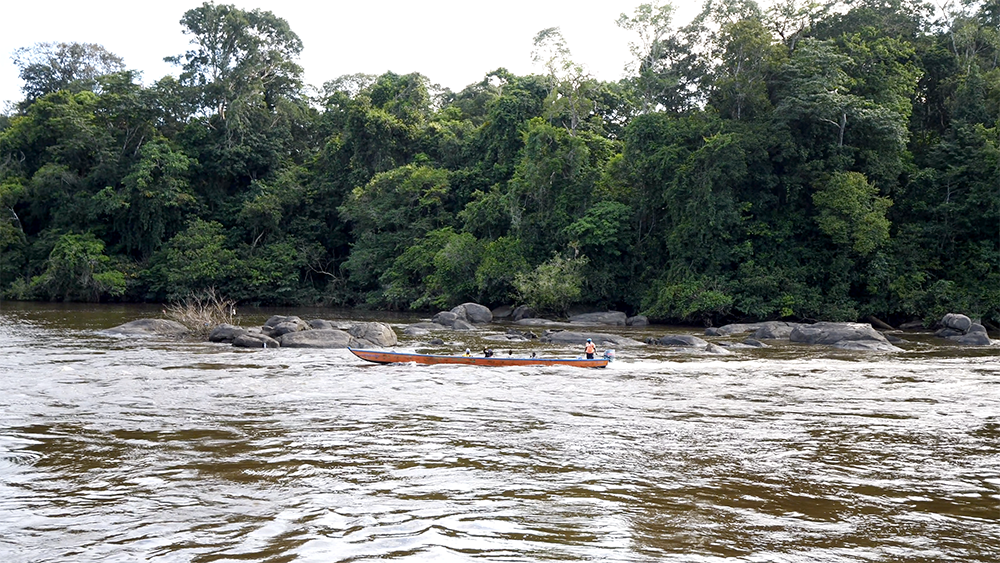 Isadou Island is so relaxing and peaceful. You can just chill out and just enjoy nature. At 10 a.m., a couple of hours after our Surinamese jungle breakfast, we headed out to go for a trek in the jungle! I wore the scarf I bought around my head and covered my neck. We brought water, sunblock, and mosquito repellent. If you don’t use OFF!, the mosquitoes will attack you! Imro doesn’t believe in using it, but I had to do it if I didn’t want to be eaten alive!

I hopped in our boat. I love jungle treks. They’re the best way to see the flora and fauna of any tropical location. We reached a trail after a 5-minute boat ride. Our trek would be 90 minutes: 45 minutes into the forest and then 45 back to the boat. The trail is man-made, but there’s tons of brush everywhere! 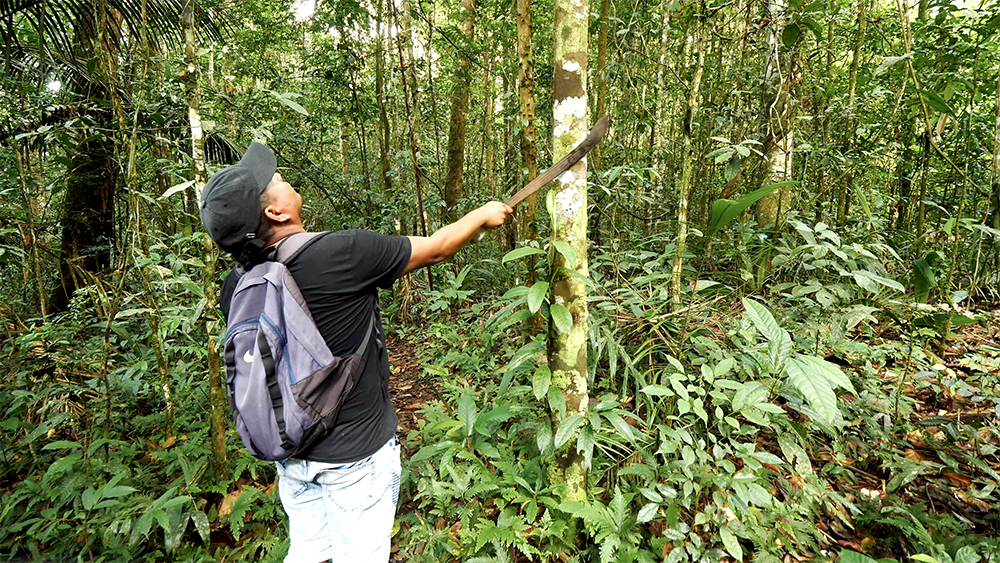 It was amazing. When you’re quiet, you can hear animal sounds all around you! The path got more narrow as we walked and it was very slippery. I was hoping to see some animals soon. I hadn’t seen anything but mosquitoes so far, but Imro told me there are yellow-foot tortoises and sloths in this forest. 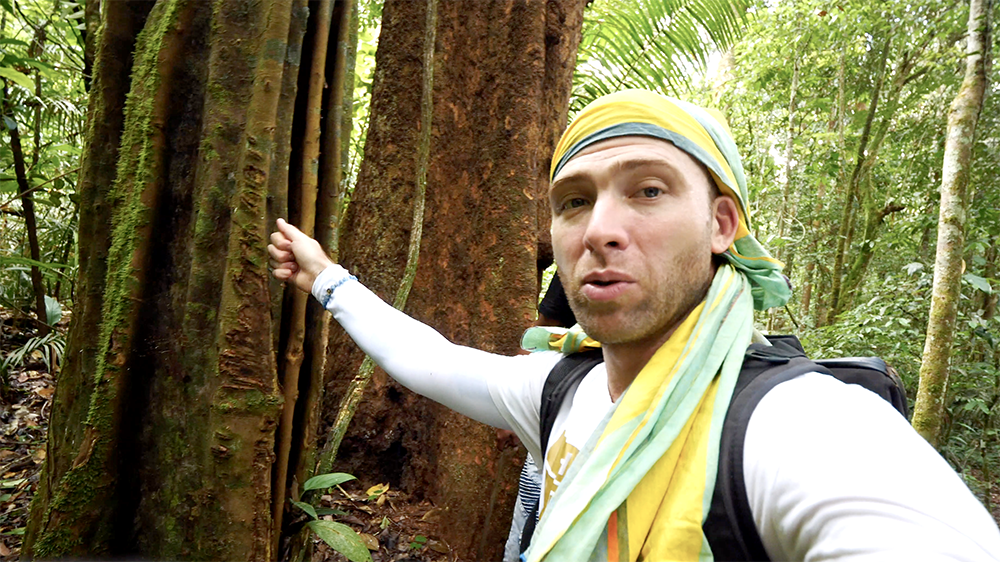 We continued through the bush and eventually found a monkey in a tree. It was a black monkey near the top. It was almost impossible to see him. We continued downhill and across some logs over a creek. It wasn’t so easy to cross. Imro showed me a sturdy tree that’s used to make crafts.

After our tour ended, we got back in the boat and headed back to the resort. I was loving this day. It was truly relaxing and peaceful. Then, I changed into my shorts to go jump in the Suriname River! The water was cold, which was perfect because it was so hot out! The water streaming over me and hitting my back was like a natural massage! Bathing in the river was such an epic experience! 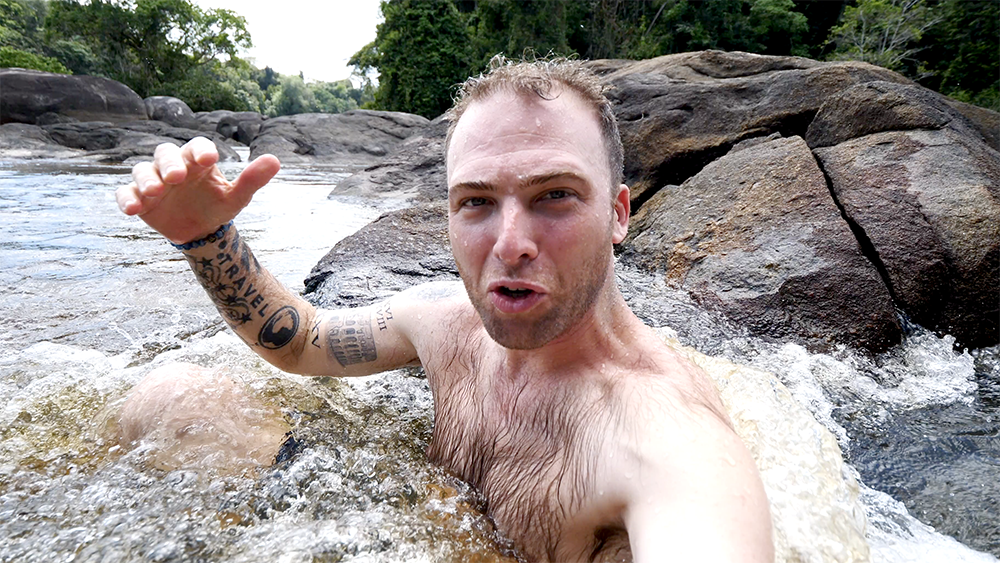 I hope you enjoyed coming with me on my Surinamese jungle breakfast and jungle trek! If you did, please give this video a thumbs up and leave a comment below. Also, please subscribe to my YouTube channel so you don’t miss any of my upcoming travel/food adventures!