Day 4 in Armenia started off with a bang as my amazing guide Lusine and I traveled from the capital city, Yerevan, to the village of Garni. There, I tried my hand at baking Armenian lavash after touring Geghard Monastery and the Temple of Garni in Garni, Armenia! They’re the two most-visited places in the country. Let’s continue our exploration of Armenia!

My day began with a drive east from Yerevan to Geghard. Behind us was a beautiful landscape that included Mount Ararat in the distance. In the Bible, Mount Ararat is where Noah’s Ark came to rest. 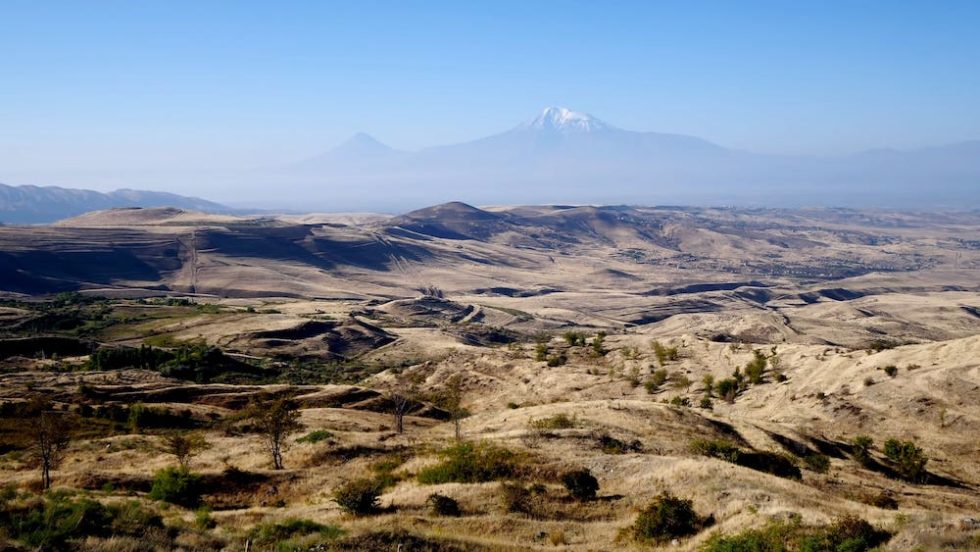 As we drove through Armenia, I noted that the land was super flat and then Mount Ararat erupts out of the ground. The land eventually becomes more hilly and mountainous. Sixty percent of Armenia is covered by mountains!

We were driving through the Kotayk Province of Armenia, which is a central region of Armenia where Geghard and Garni are located. It’s about 1,600 meters above sea level. The weather was amazing for the first day of October. It can get hot during the day but cools off a lot at night. 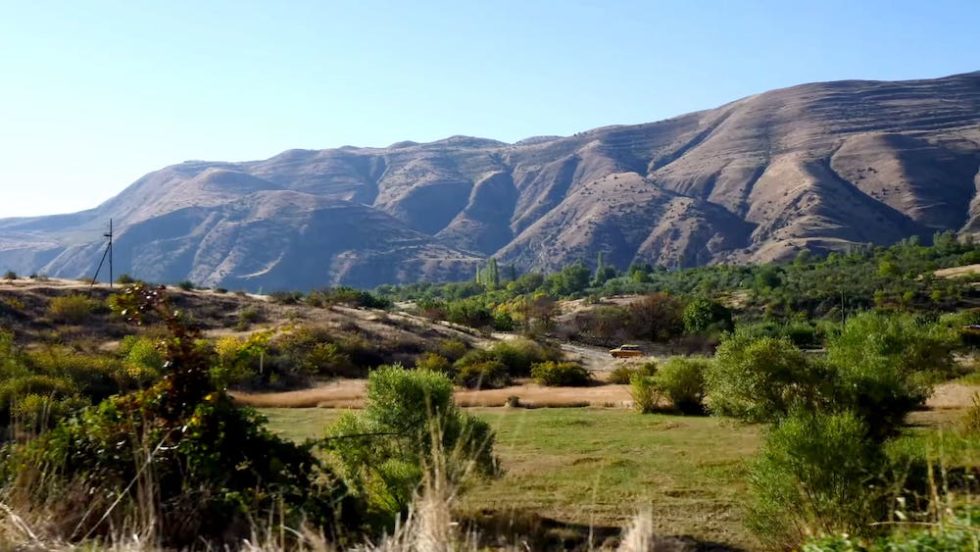 On one side of the road was golden brush, while there was more greenery on the other side. I spotted Geghard Monastery as we rounded a bend. It’s beautiful! I was greeted with some amazing Armenian sweet bread or pastry called gata. It’s fluffy and made with flour, sugar, and honey. It’s super sweet and tasty! 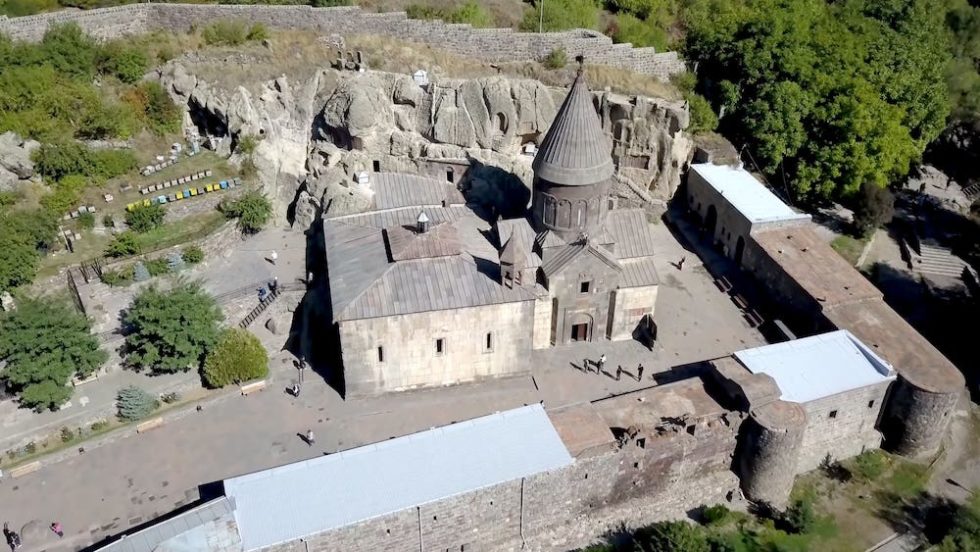 As you approach the monastery, there are vendors selling rosaries and other religious items. There are also sweets and dried fruits. I also saw the very first rock-carved church, which dates back to the 12th century. 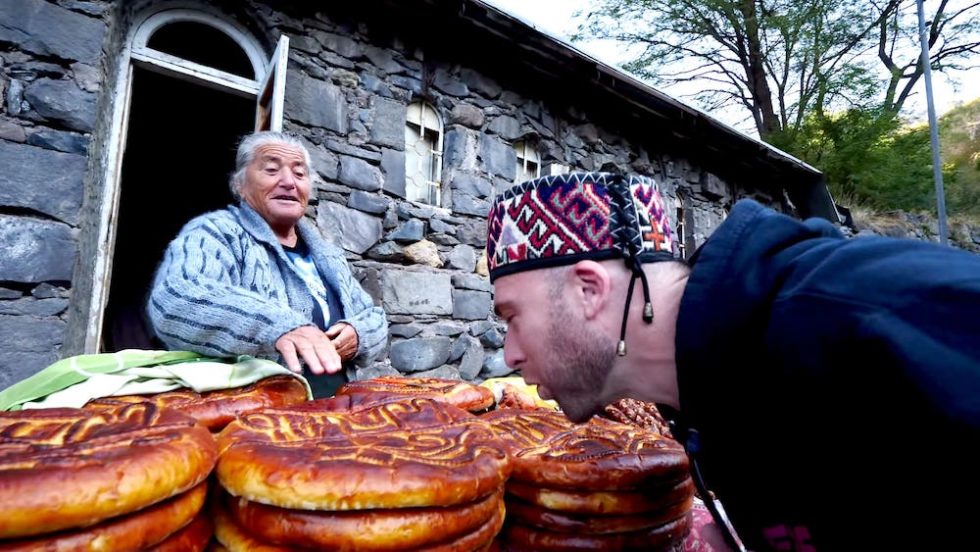 Geghard Monastery is a UNESCO World Heritage Site and was built during the 13th century. “Geghard” actually means “spear,” which refers to the spear that pierced the side of Jesus Christ. The spear was kept in Geghard Monastery from the 13th to 18th centuries! 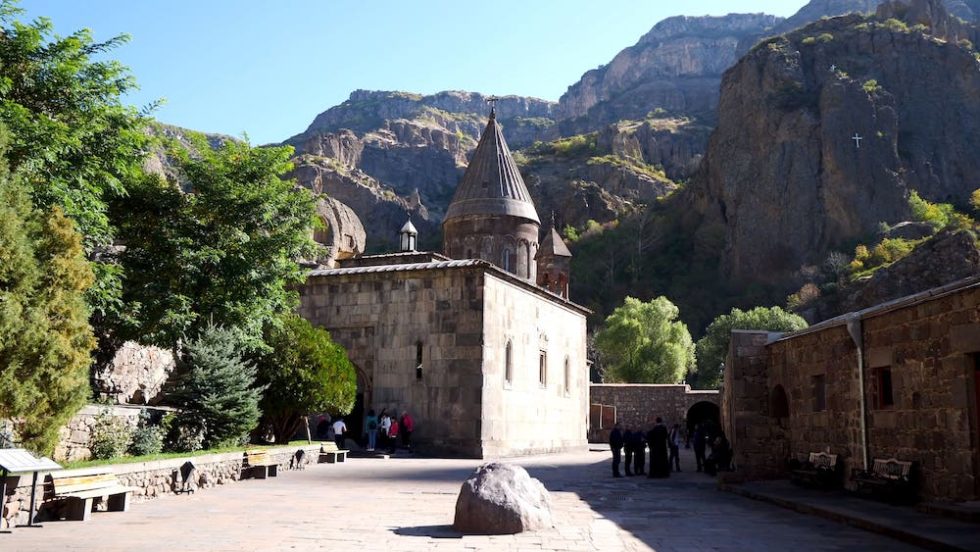 Then, we entered a cave with carvings all over the walls. It leads straight into a 13th-century noble family tomb inside the mountain. It was all carved from one piece of rock! It’s a gorgeous mausoleum that was dug and carved from the top down and slowly carved the pillars and everything else inside. 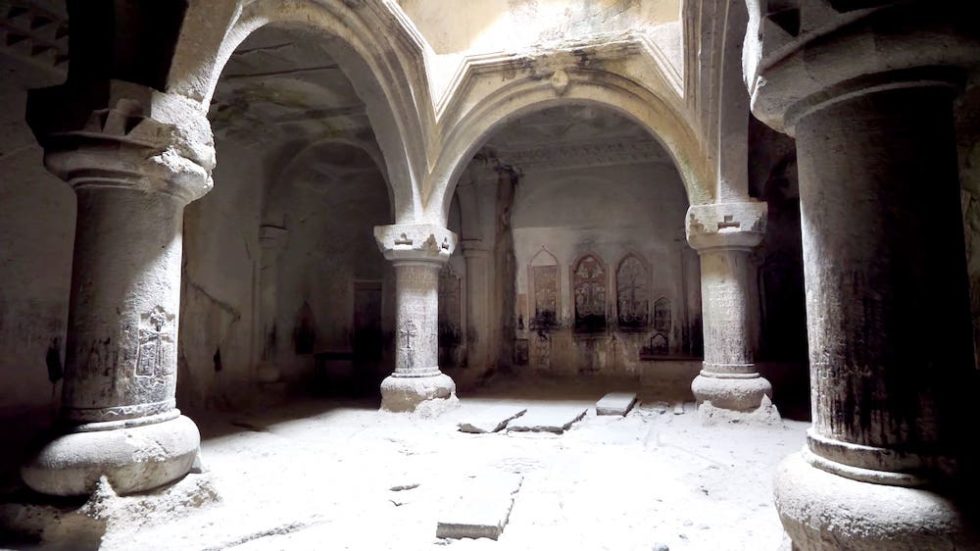 The carved writing on the walls is written in Armenian. The history was carved on the walls to document it during the 13th century, when attacks from Mongols were prevalent.

Check out the 20 Things You Must See and Do in Yerevan, Armenia

Then, I got to witness a beautiful performance where women sing and chant. The acoustics inside are incredible. They used the tomb as a music school because the acoustics are so good! 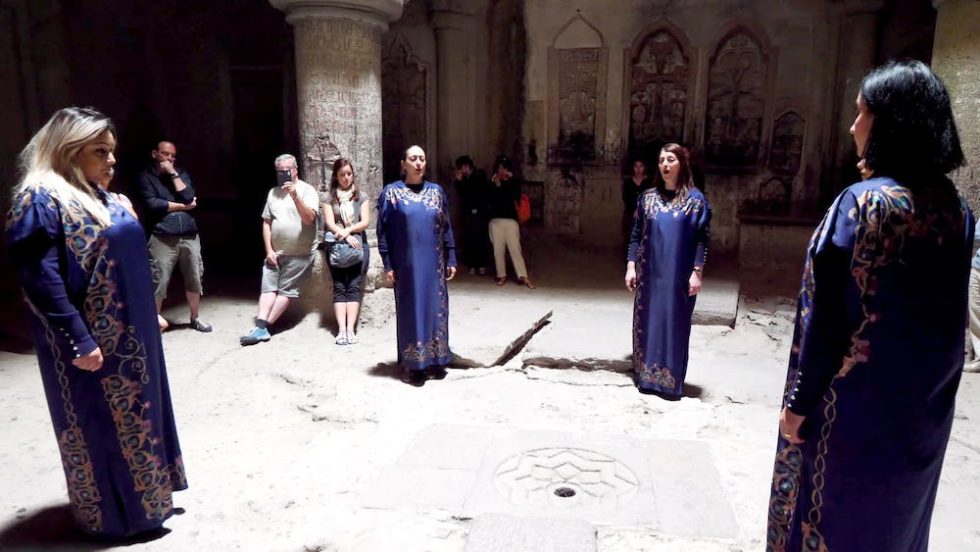 Next, we headed inside the church, which is a little dark inside, but once your eyes adjust, you can see the amount of detail inside. There are columns and lots of carvings in the corners. 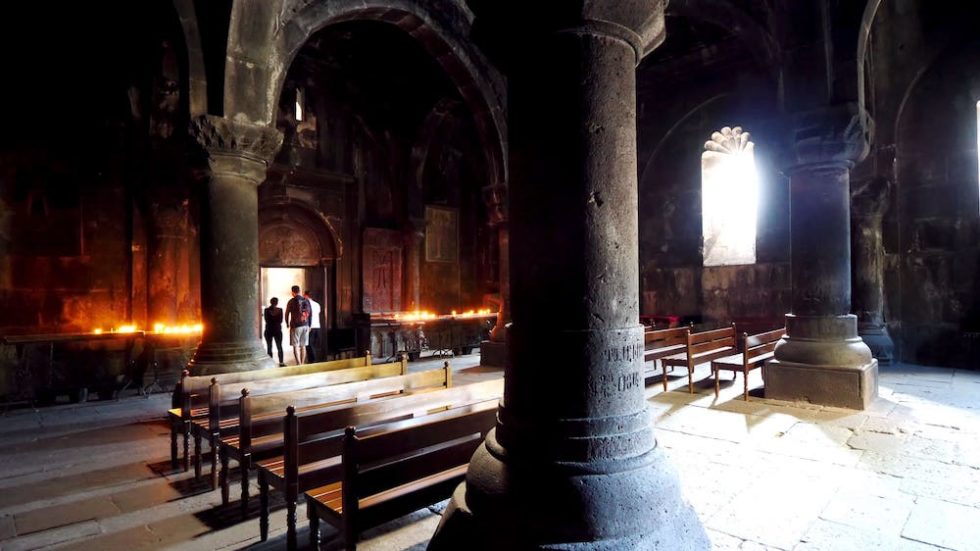 Unlike the tomb, this church was constructed, so it isn’t made from one stone. In the back is a holy spring. It was sacred even in pre-Christian times when people worshipped water. I took a drink from it. It was freezing! 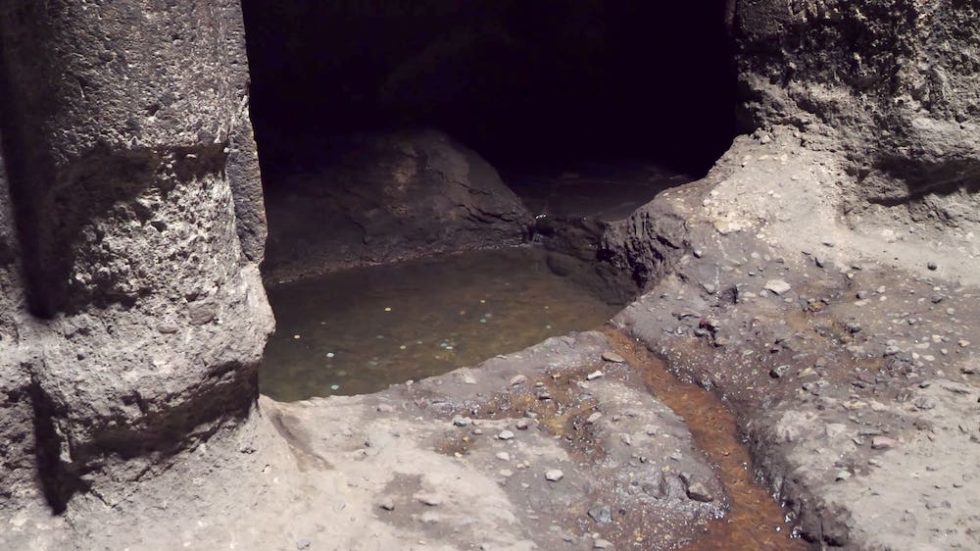 I had never seen anything like this. This part of the church is carved out of the mountain. There were pillars and intricate carvings in the walls. Light comes down from above to illuminate everything. 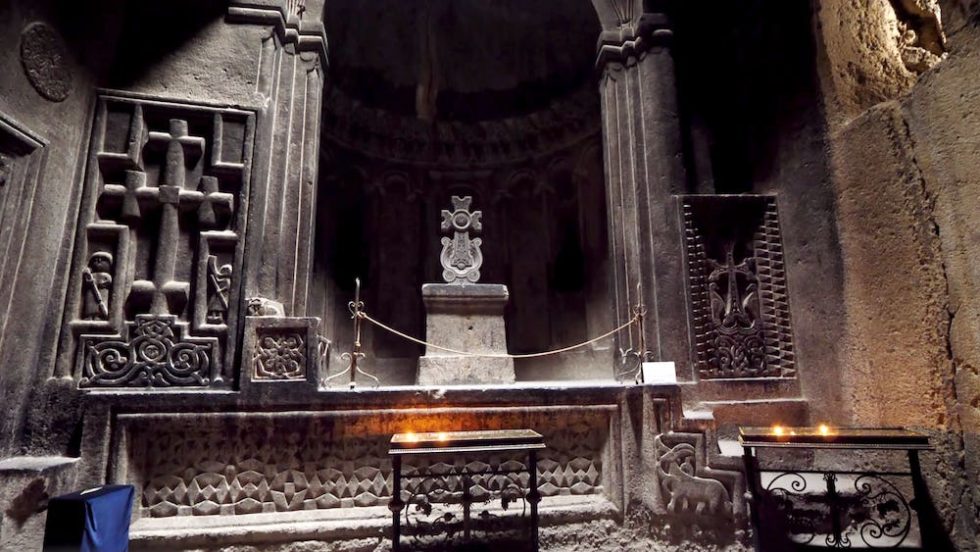 To the left of the holy water stream room is a rock-carved church. It’s made from one piece of rock. There is a cupola, trees of life carved on the walls and pomegranates, which are a symbol of fertility. I loved all of the crosses and patterns. 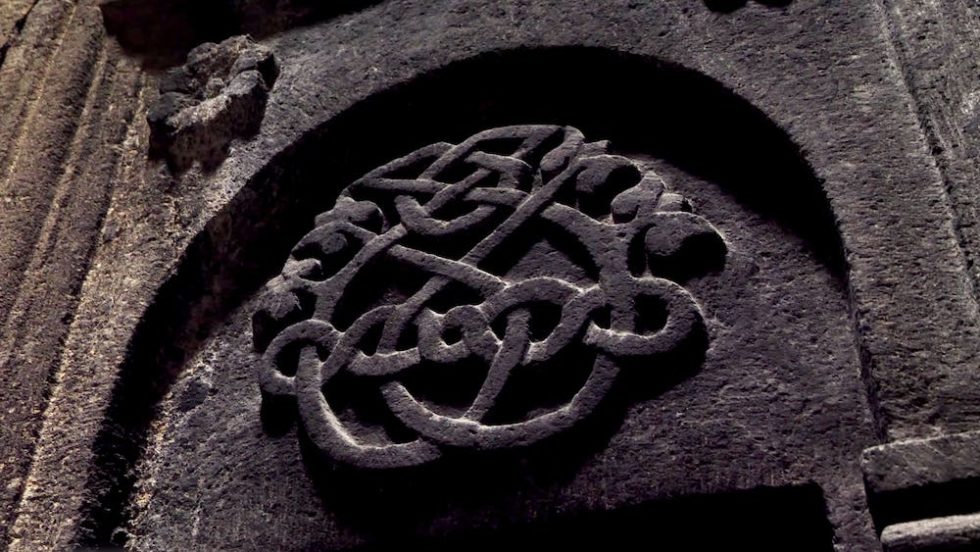 Outside of the rock-carved church is the main church, which was built in 1215. There are lots of religious paintings of Jesus Christ and angels on the walls. Outside on the walls are carvings of pomegranates and grapes. 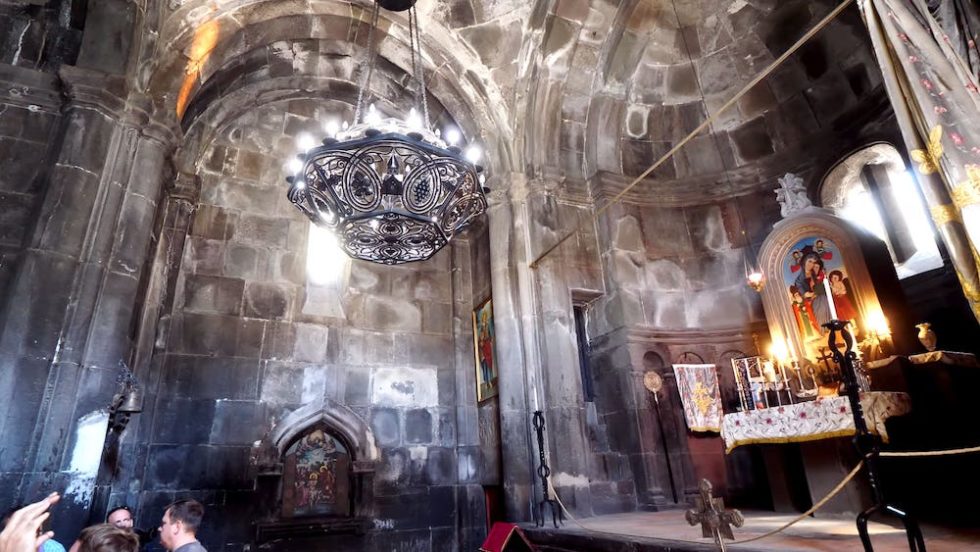 This church was also built with special corners for seismic stability. There are lots of caves around the area, which were used as sanctuaries for the monks. 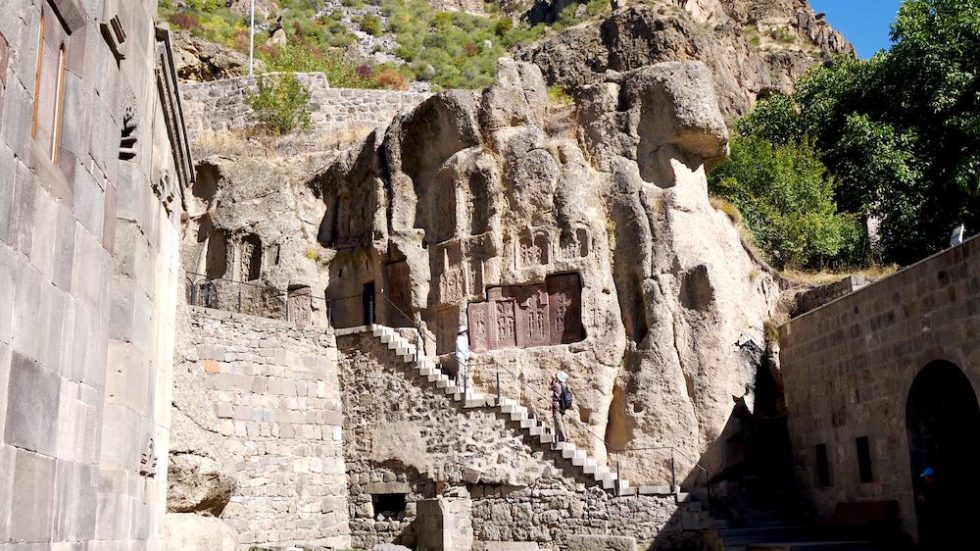 Seeing them is a fascinating look into the history of the monastery and Armenia as a whole!

From the monastery, we headed to the Temple of Garni. It’s a pre-Christian and pre-Hellenistic pagan temple that was dedicated to the Armenian sun god, Mihr. It was built in the 1st century and survived the destruction of pagan temples that occurred when Armenia converted to Christianity. 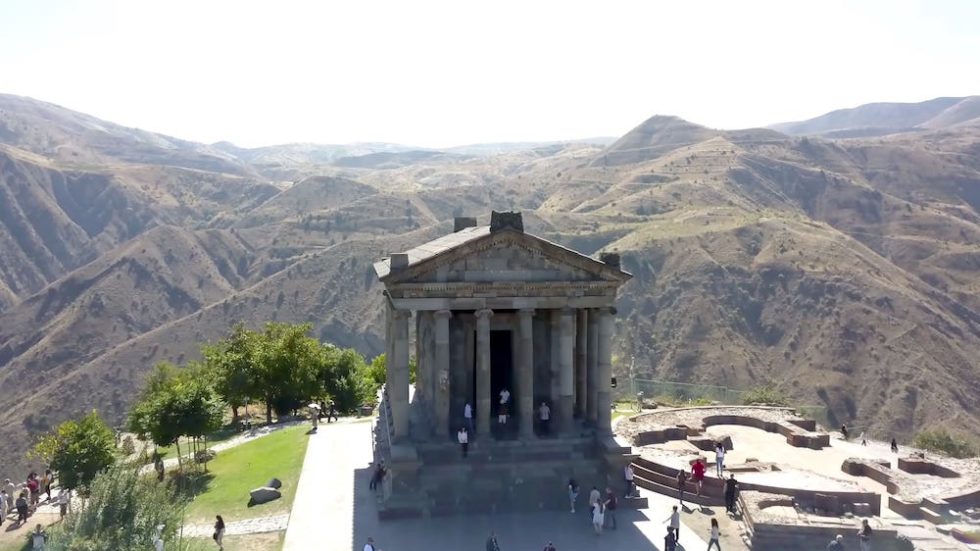 It collapsed in 1679 but was rebuilt from 1969 to 1975. It’s Armenia’s only free-standing Greco-Roman structure and is a beautiful symbol of the country’s classical past! Because of its significance, it’s also a UNESCO World Heritage Site. 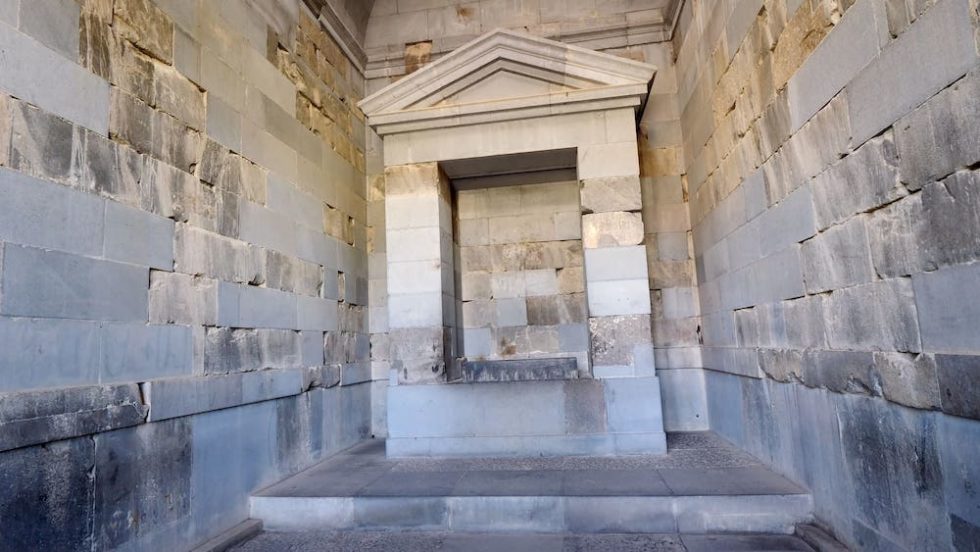 The Temple of Garni is one of the highlights to any visit to Armenia. Excavations there show that the area is ancient and that the site has been inhabited since the 4th millennia before Christ. It reminded me of temples I’d seen in Italy. 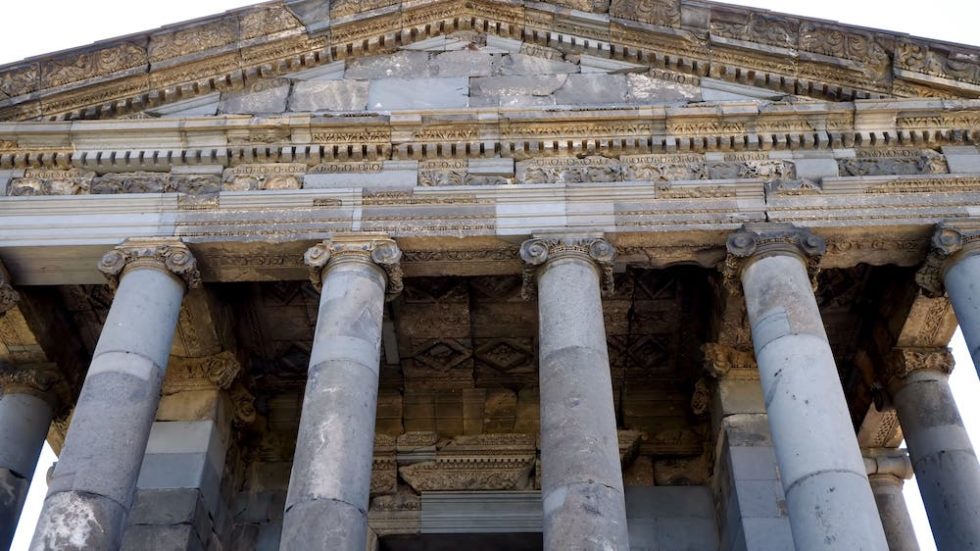 The temple boasts 24 columns and steep steps lead up to the main hall, where there is an altar. There were no stairs on the backside, but there were incredible views of the surrounding mountains. We also listened to a musician play the duduk, the national musical instrument. It’s also known as the apricot pipe because it is carved from the apricot tree! 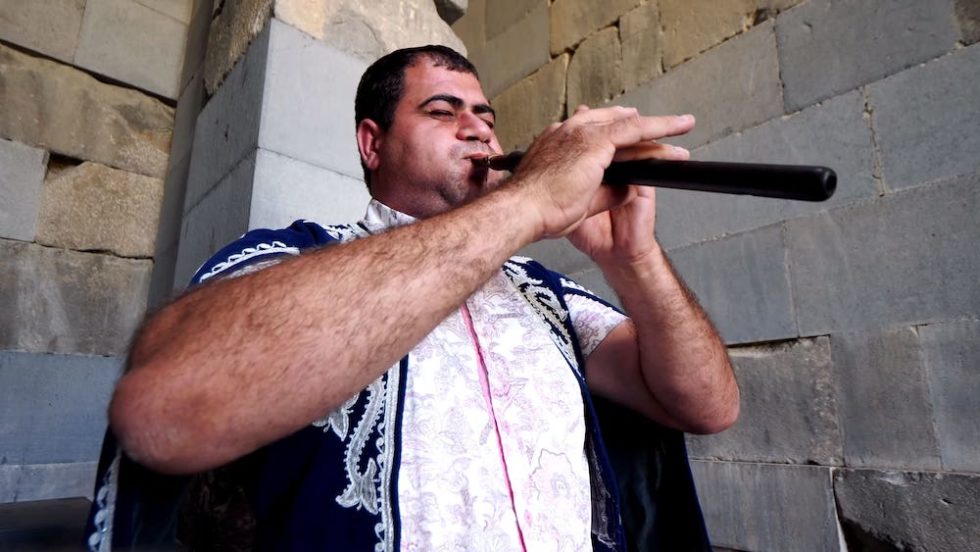 The temple was built without cement, but they used iron to unite the stones of the foundation. It was my favorite site in Armenia so far!

Check out What to See and Eat on Lake Sevan, Armenia

Further on is a stone that is carved with an Aramaic inscription from the 8th-century BC that proves that the area had been settled for centuries. It was written by King Ardashir I, who wrote about uniting Garniani land with Ararat. 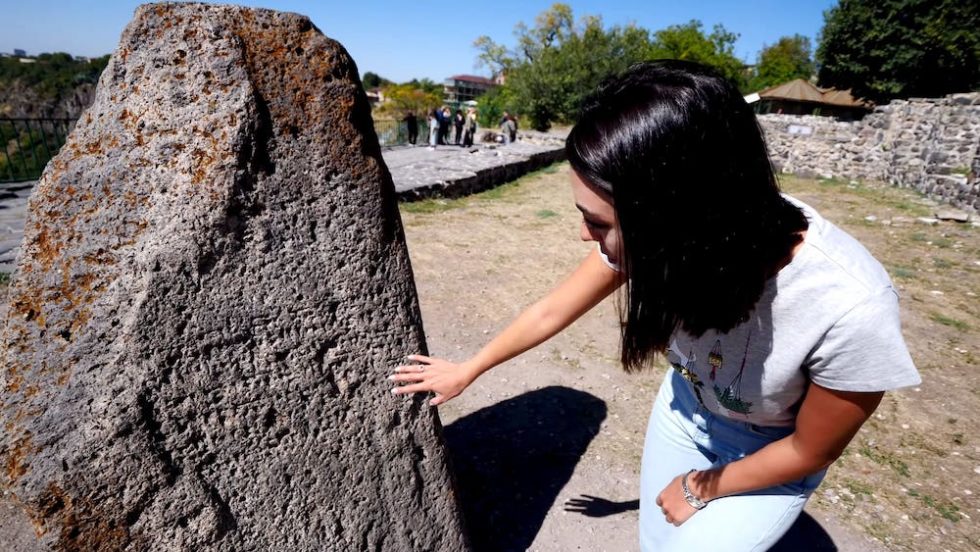 Nearby is the summer residence, which contains a beautiful, 3rd-century mosaic. It’s made from 14 types of colorful natural stones! 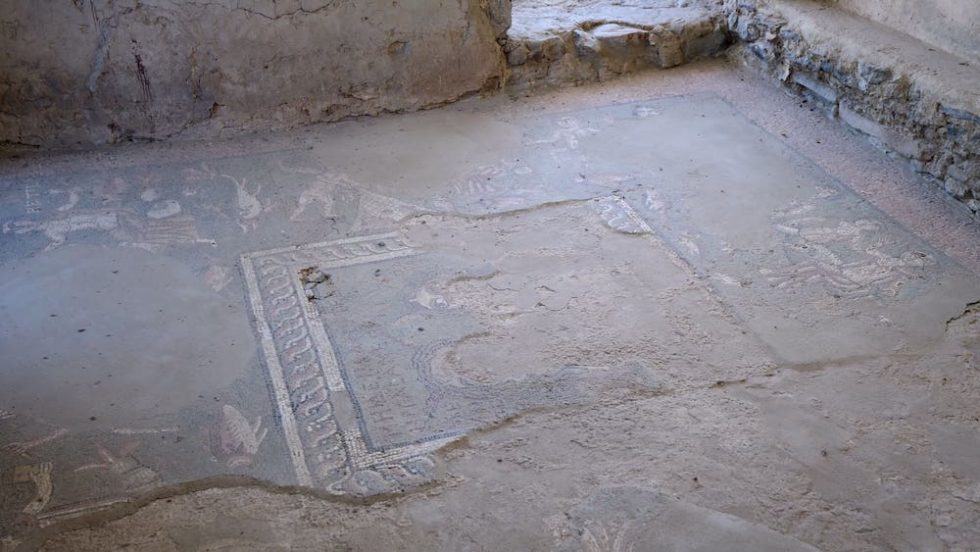 Next, it was time to learn to bake Armenian lavash at Garnitoun Restaurant after our amazing time at Geghard Monastery and the Temple of Garni in Garni, Armenia. There was a woman making nonstop lavash. She rolls the dough out and puts it in an oven called a tonir. It cooks for a few minutes! 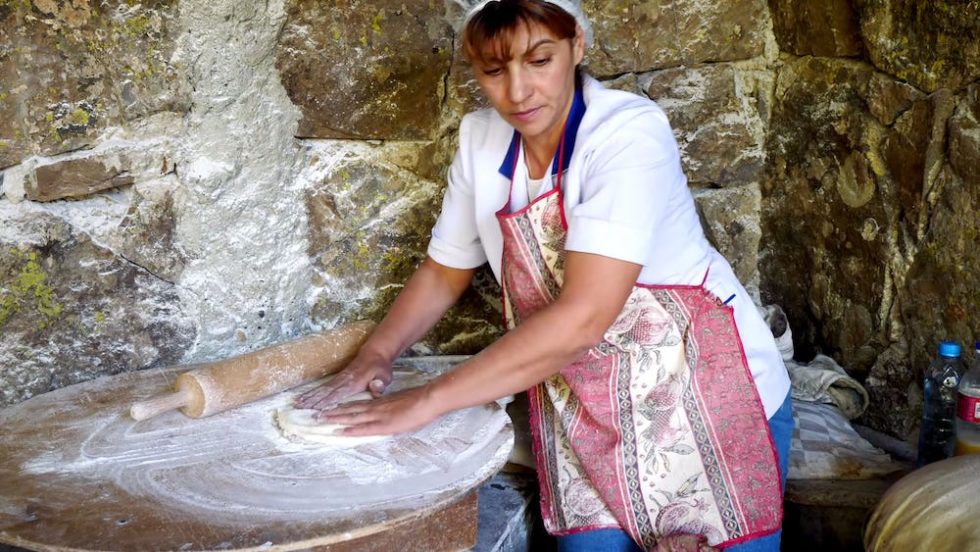 It’s a long bread that you fill with cheese and herbs. It was so good! I love cheese, herbs, and flaky, crispy bread! But then it was my turn to make some lavash! 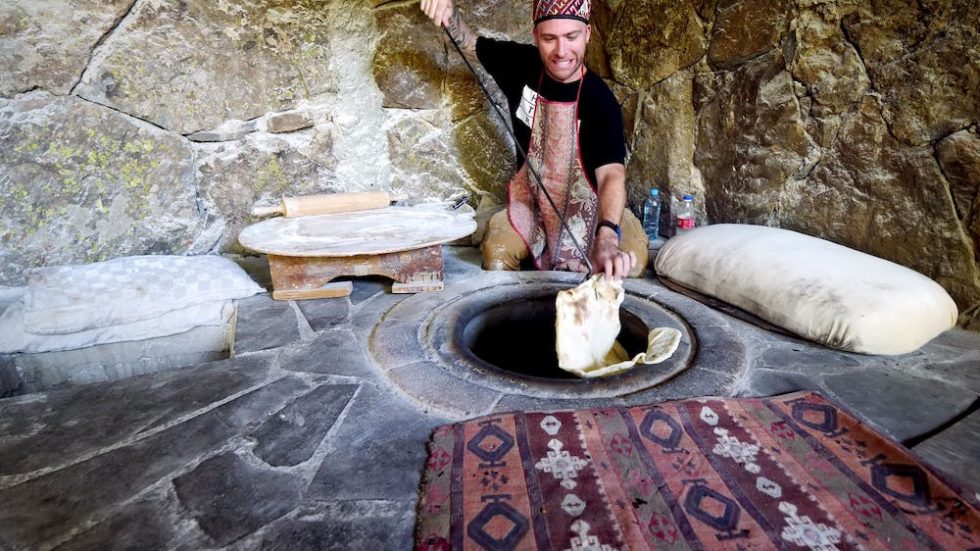 I rolled out my floured dough a bit, added more flour and rolled it again. Then you spread it on the pillow, spray it with water, and slap it to the inside of the tonir. I didn’t get it entirely inside the oven, but after 30 seconds, it was cooking. Then I pulled it out. I thought I did a bad job!

Check out the 5 Reasons to Visit Dilijan, Armenia

From there, we entered the restaurant, which boasts unbelievable views of the Temple of Garni and the surrounding valley. There’s also a glass floor on the edge. I couldn’t wait to eat! 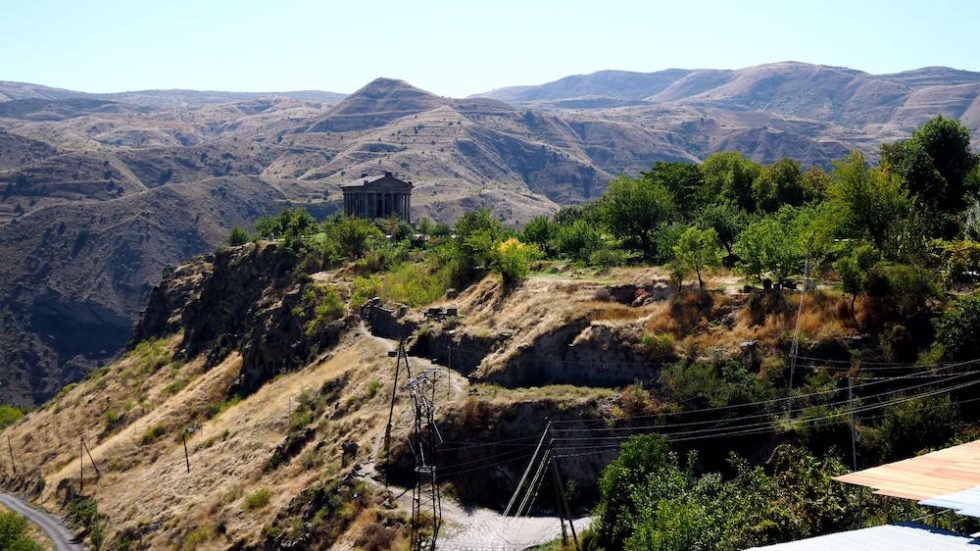 We got eggplant stuffed with cheese; a Greek-style salad with tomatoes and cucumber; three cheeses including string cheese and herb cheese; cream; lots of herbs; lavash; and greens with pomegranates. They gave us tons of lavash, so I started with that! I stuffed it with a crumbly cheese and herbs. I loved it so much. It was so refreshing! I added a cucumber. 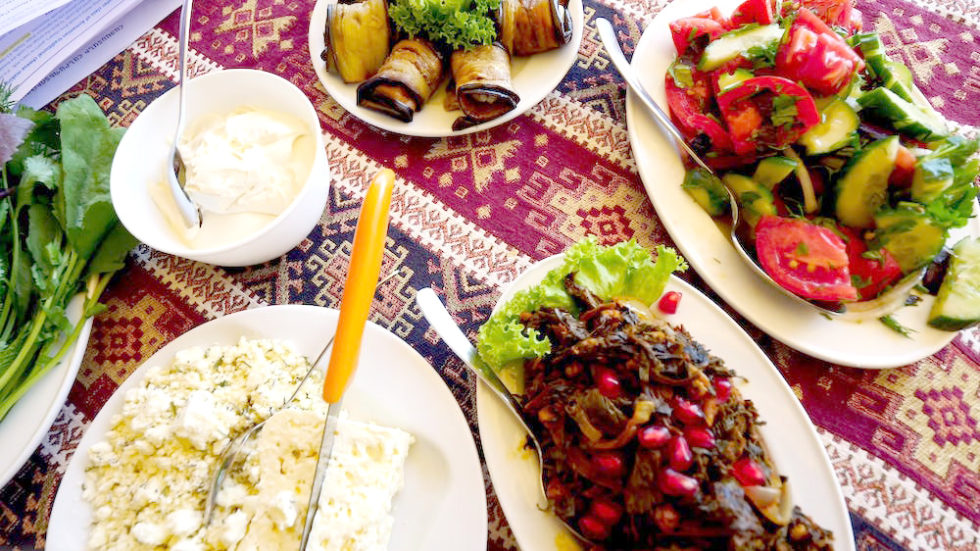 The cheese ferments underground in clay jars. It was so delicious and healthy. Next up was the eggplant stuffed with cheese. It was unbelievable and looked like in had honey on it. The greens with pomegranates were dark and the pomegranate added a nice pop. It was crunchy and refreshing! 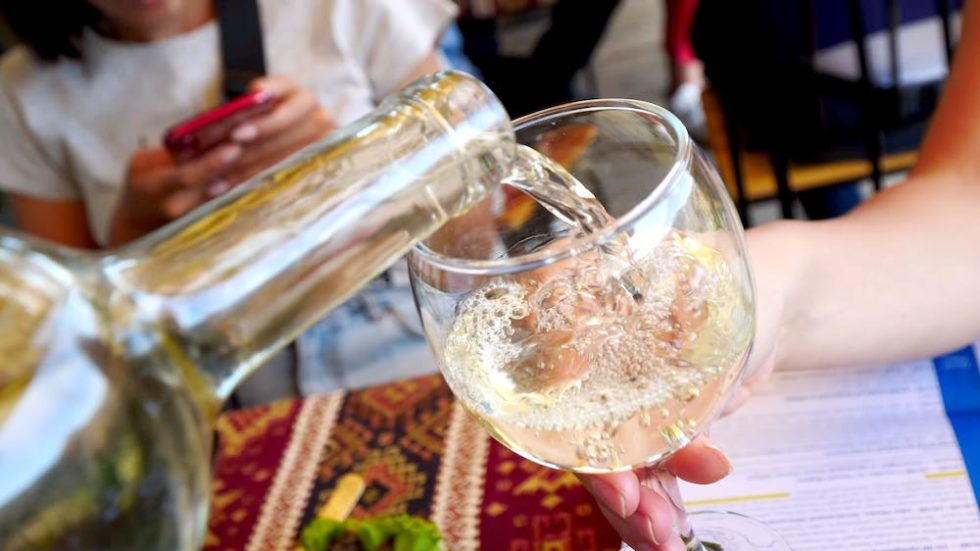 We enjoyed some 2018 VanArdi dry white wine with our meal. It was delicious and almost like an Albariño wine from Spain and Portugal. Then, we got two more appetizers: green beans with eggs and dried fruit salad with apricots, plums, pomegranate, and apple. 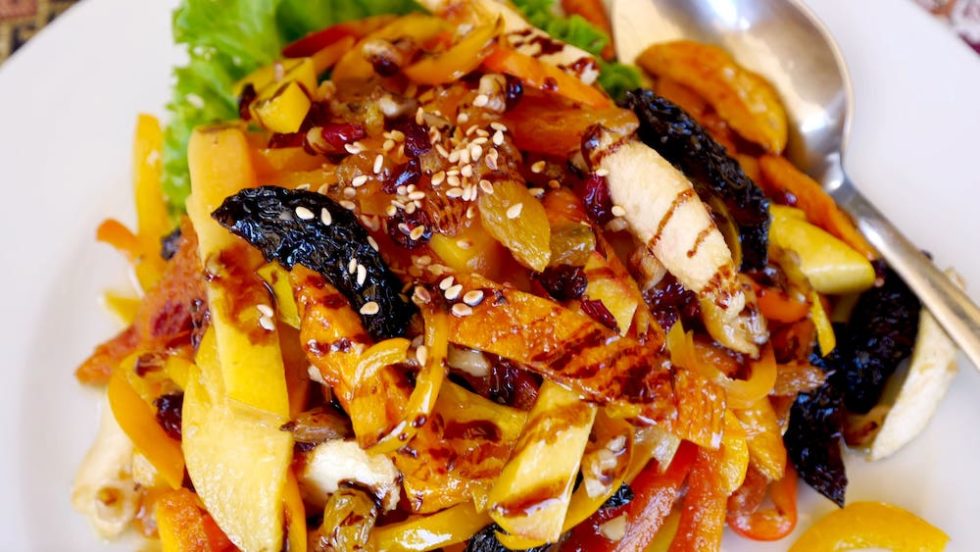 The dried fruit salad was phenomenal. I also loved the green bean omelet. The veg was so fresh and the egg was still a little runny.

Check out the 5 Things You Must Do in Areni, Armenia

Our main course was barbecued trout, which fell apart on me. My favorite part was the skin, which was nice and smoky. I dug through the trout to get rid of the bones. It was so buttery and the smoky flavor was really great! 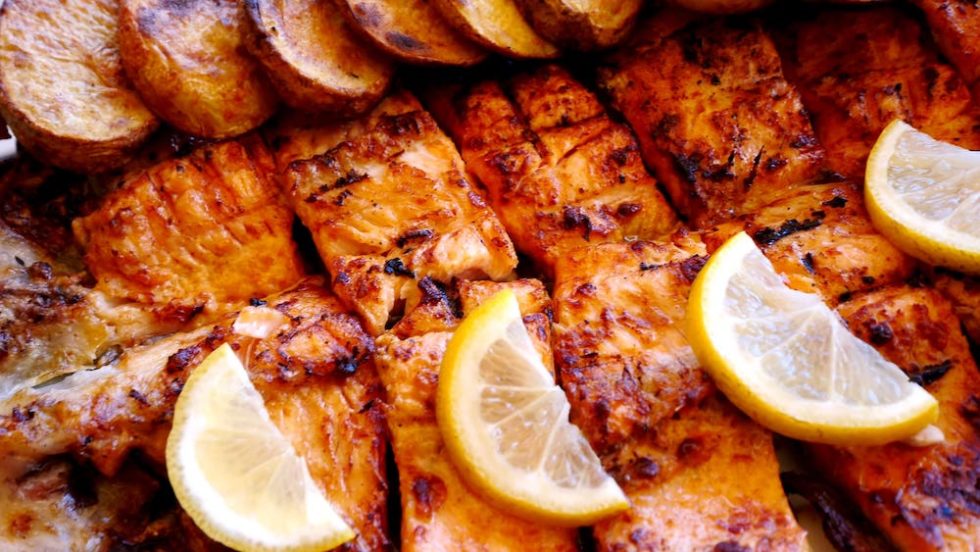 You can’t beat great food in a beautiful place with great people! Between learning to make Armenian lavash and visiting Geghard Monastery and the Temple of Garni in Armenia, this was already shaping up to be another incredible day! 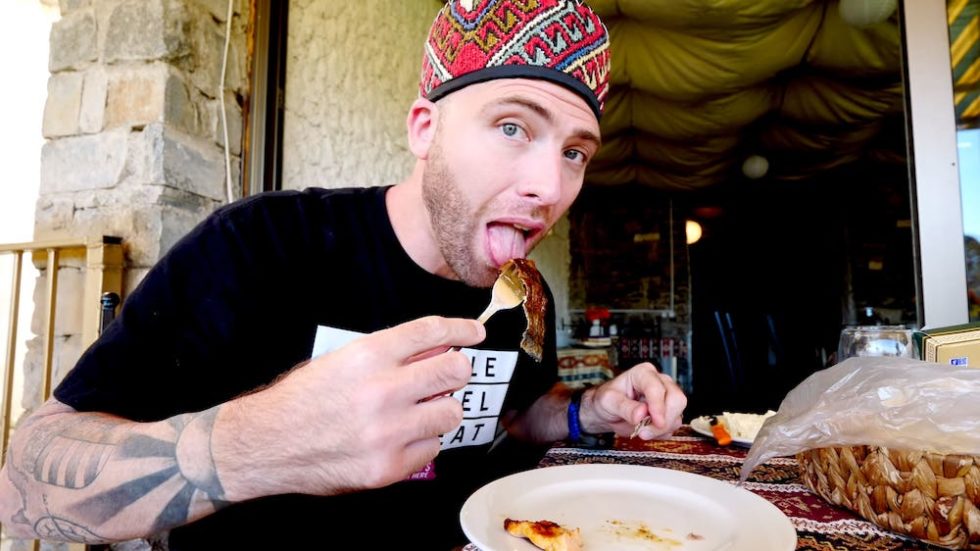 I hope you enjoyed baking Armenian lavash and visiting Geghard Monastery and the Temple of Garni in Armenia with me! If you did, please give this video a thumbs up and leave me a comment below. Also, please subscribe to my YouTube channel and click the notification bell so you don’t miss any of my upcoming travel/food adventures! 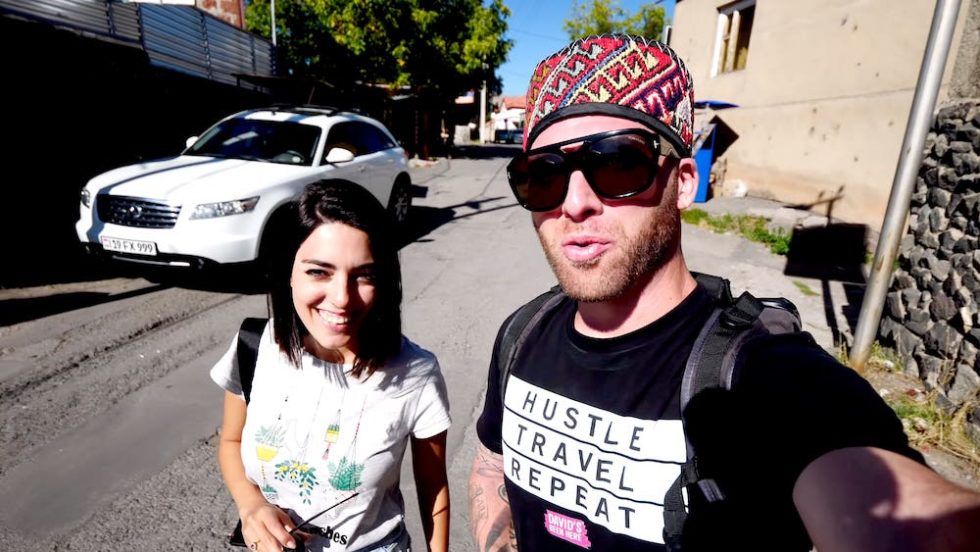