On the morning of my third day in God’s Own Country—Kerala, India—I set out on a mind-blowing Kerala breakfast food tour where I tried appam, puttu, spicy egg curry, and duck roast in Alappuzha, India! Come along with me and my boy Vishnu as I continue exploring the wonderful world of Kerala cuisine!

I began my day at 6 a.m. at beautiful Varkala Beach in Varkala, Kerala, India. I was super excited to head two hours north to the city of Alleppey, also known as Alappuzha! This amazing city is located in the legendary Kerala Backwaters, which are known for their natural beauty and world-famous houseboats! On our way there, we’re going to stop at two spots for some authentic Kerala breakfast food and also get some chai. I was so excited. Let’s go to Alleppey! 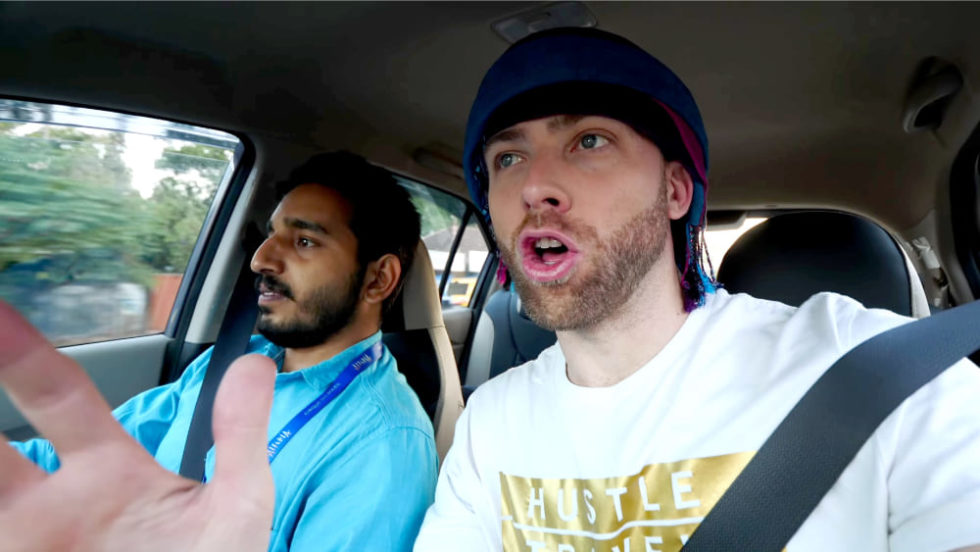 We followed an extremely narrow road lined with houses and palm trees. All of the streets in Varkala are like this. There were also tea spots and vendors. We passed by walls with lots of political symbols painted on them. Soon, we came up on the Arabian Sea to our left and a lake to the right. The sky was getting brighter, and the full moon was out! 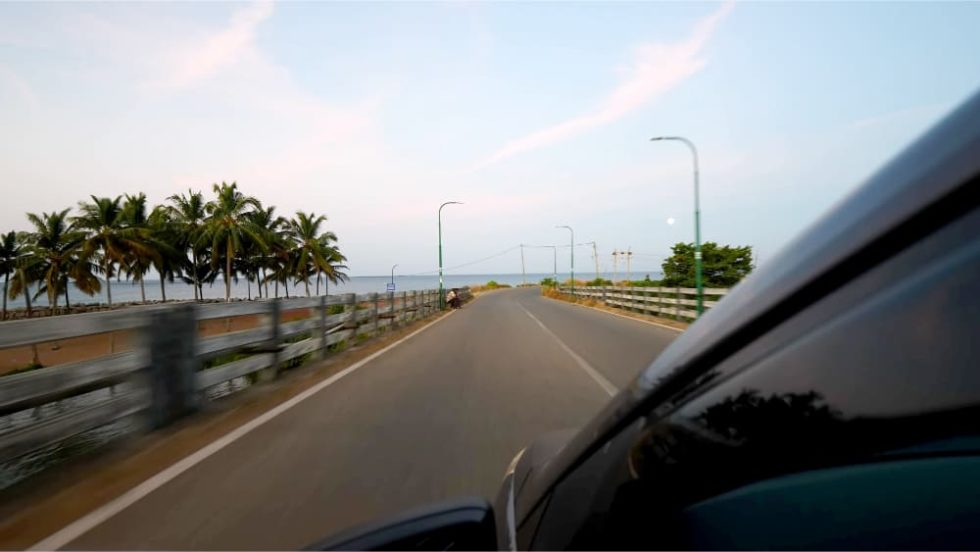 We hit the highway that connects Varkala to Kollum. It’s the main road that connects many of the towns and cities around here. We reached a junction along the road, and would probably hit several more along the way. The junctions are full of traffic!

After making a detour to Ezhuthanikada Restaurant, Vishnu and I grabbed some café con leche-like chai at a shop across the street. They also sell banana fry! 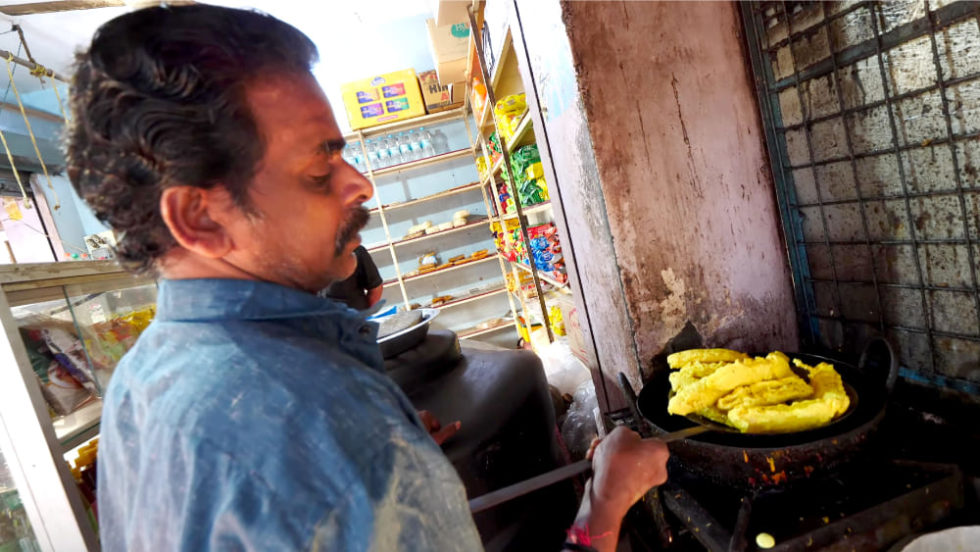 From there, we headed back over to Ezhuthanikada Restaurant to get some vettucake, a yellow, slightly sweet cake that they’re famous for. In the kitchen, we watched them make appam and parottas. There were hundreds of appams there! There were also tata dosas, a curry made of tomatoes, onion, and coconut oil. I wanted to try everything! 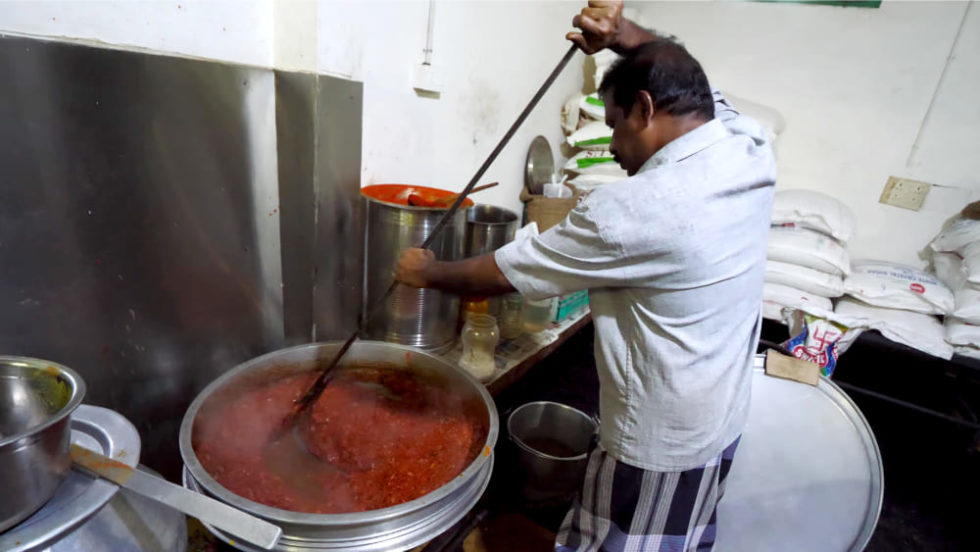 I started my Kerala breakfast food tour on the way to Alappuzha, India with the vettucake, which was like a hot, fresh, and dense muffin made with maida, sugar, and cardamom. It was sweet, with a crispy outside and doughy interior. I dipped it in my chai. It took me back home to Miami, where we dip bread in our coffee! I loved the cardamom flavor. The vettucake absorbed the chai, making it a truly delicious combination! It was a nice, filling way to start the day! In the afternoons, they eat vettucake with a curry! 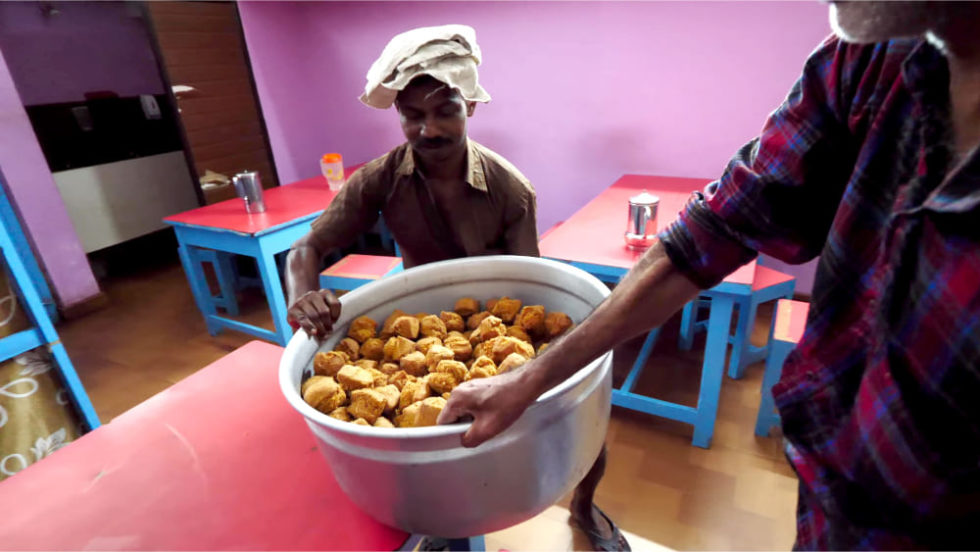 Next, the appams, papadum, and egg curry arrived. Your break off a piece of the soft appam and dip it into the tomato-based curry. I watched Vishnu eat it first and then it was my turn! It was unbelievable! The appam was similar to a dosa, but a more steamed version with crispy edges. The curry was unreal! It was so good!

Then, I crushed up the papadums and poured all of the curry onto the place and dug in. It was super hot and absolutely delicious. It had lots of onions and was very tomato-heavy, but it wasn’t spicy. The crunchy papadum with the spongy appam and the rich curry was such an incredible combination. It was my type of meal! Then, I broke up the egg into the curry. It was a little messy, but too good! 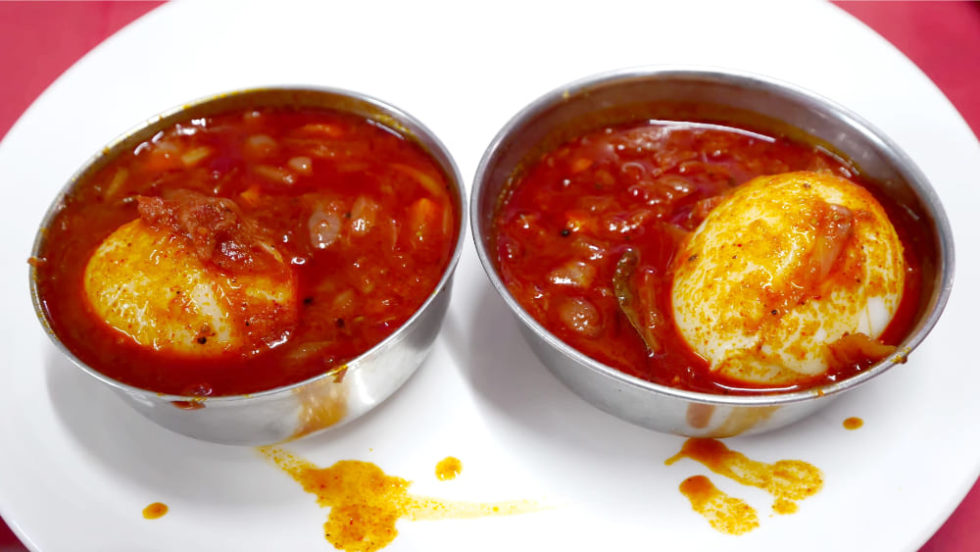 After our unbelievable meal, we hopped back in the car and continued toward Alappuzha. We reached the highway. We had about 90 minutes left before we’d get there. There was no traffic and no more junctions. But there were pedestrians crossing every several meters or so. We exited the Kollum municipality. It was starting to get super hot although it was only 8 a.m. 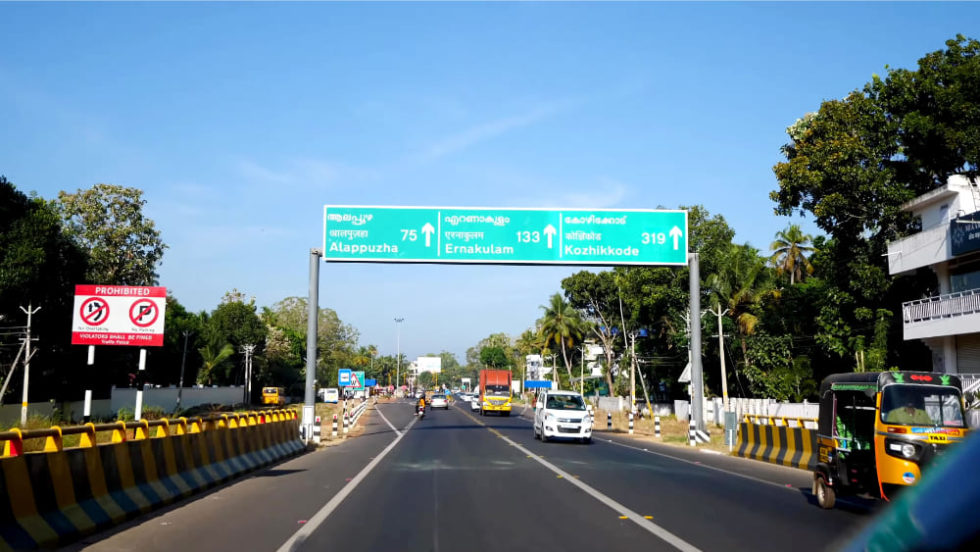 We finally arrived in Alappuzha. I learned that restaurants in Kerala are called “Hotel” because it’s easier to pronounce. There’s no actual hotel there; it’s just a restaurant. We stopped at the Brothers Hotel, where we’d get to have a steamed coconut flour dish called puttu. I was going to have it with both fish curry and duck curry. One was brown and the other was red. They both looked super rich! We also saw how they make herbal karingali water.

Back at our table, we continued our Kerala breakfast food tour in Alappuzha, India with puttu, reddish fish curry with chilies, and brown duck curry. I loved the flavor of the fish curry with the sweet coconut and different rice flours. It wasn’t too spicy. 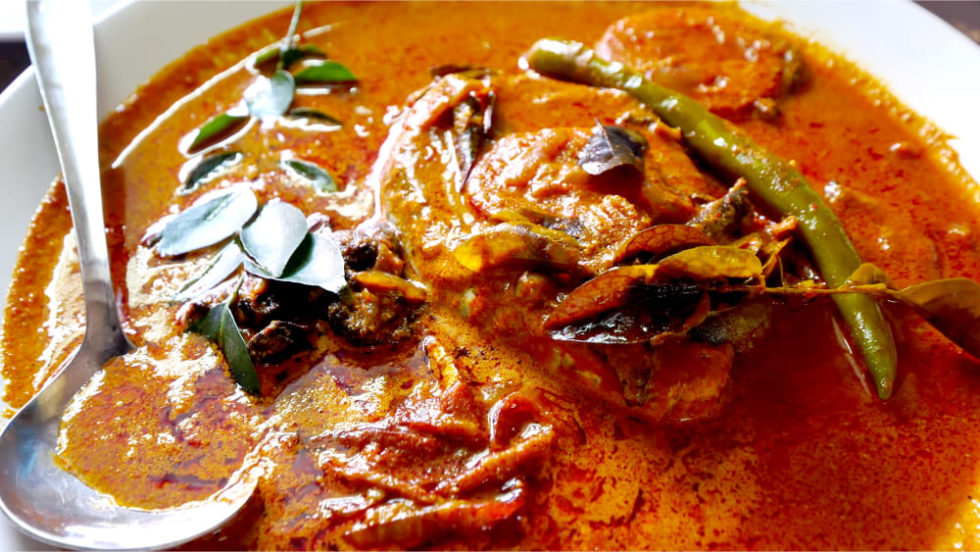 Then, I added a bit of buttery fish and crunched into a super hot chili! The duck and its gravy with the puttu were like a coconut rice duck ball. I loved the duck meat, spices from the curry, and the sweet coconut together! I followed that with a pink-tinted and earthy karingali water. But nothing could beat the duck! Finally, we finished with a unique and tasty chai! 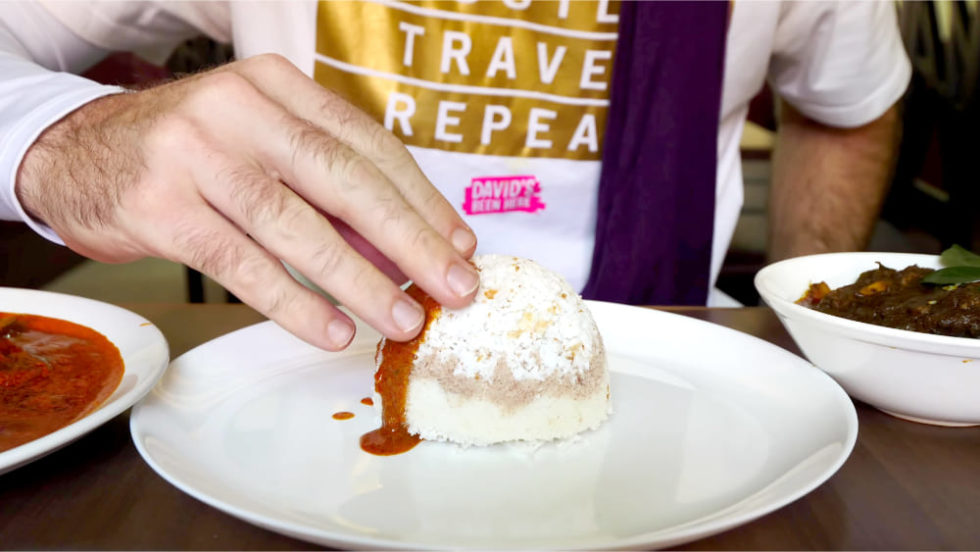 What an epic Kerala breakfast food tour in Alappuzha, India! I could not believe how incredible these dishes were. Huge thanks go out to my buddy Vishnu for this incredible morning, and for showing me around his incredible state for the previous 48 hours. I could not have done this without him. Be sure to give him a follow over on Instagram! 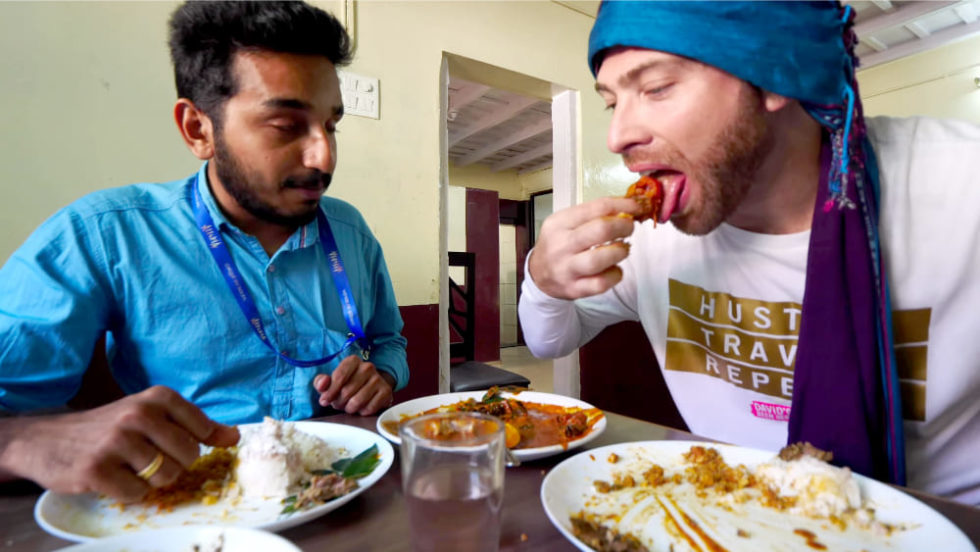 I hope you liked coming with me on my Kerala breakfast food tour in Alappuzha, India! If you did, please give this video a thumbs up and leave a comment below. Also, please subscribe to my YouTube channel and click the notification bell so you don’t miss any of my travel/food adventures around the world!