After a hectic, last-minute effort to make it from Bhutan to India before the Indian borders closed to foreigners due to the COVID-19 pandemic, I made it to Kolkata. There, I linked up with my boy Carlos from Volpe, Where Are You to film a series of videos while I waited for my connecting flight to Qatar. Come along with us as we go on an unlimited puchka challenge and try to eat as many pani puri / golgappa in an epic Indian street food challenge in Kolkata, India! 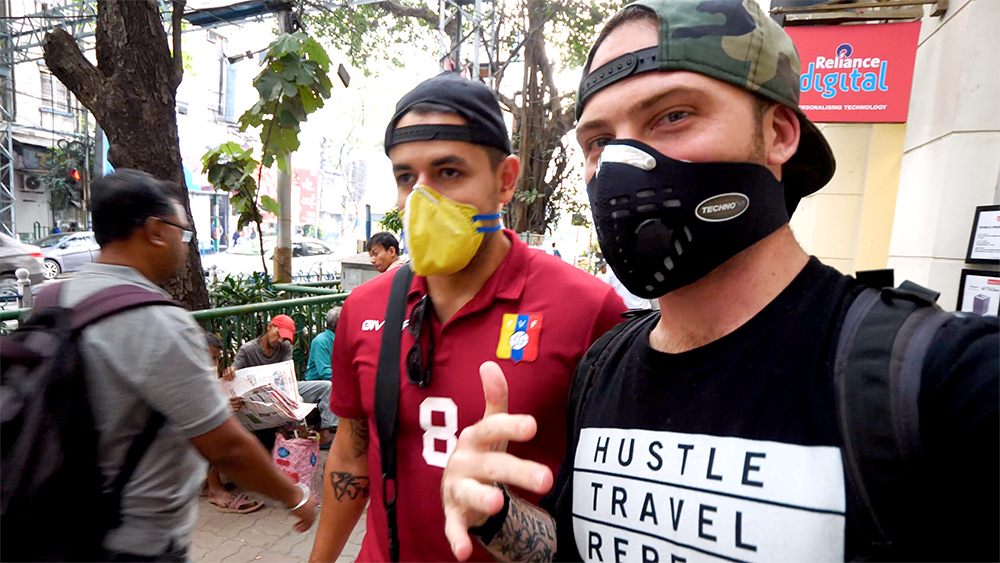 I was so excited to go all-out with a puchka / pani puri challenge in Kolkata, India! Carlos and I are huge pani puri fans, so this was going to be a super fun challenge during an otherwise scary and uncertain time. We were just going to tell the vendor to start and then keep going until we popped. We were going to see how much it would cost at the end. 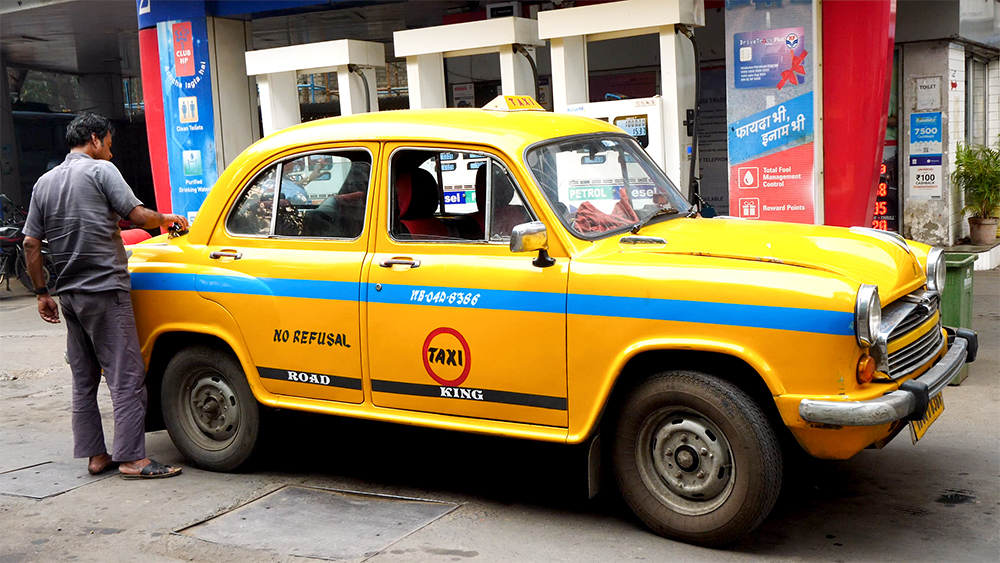 Carlos and I were the only two people walking around the streets wearing face masks, even with the pandemic exploding around the world. We had to be careful with the traffic as well, as there are no real traffic laws in India, so you have to be aware of everything around you as you cross the street. When in doubt, follow the locals! 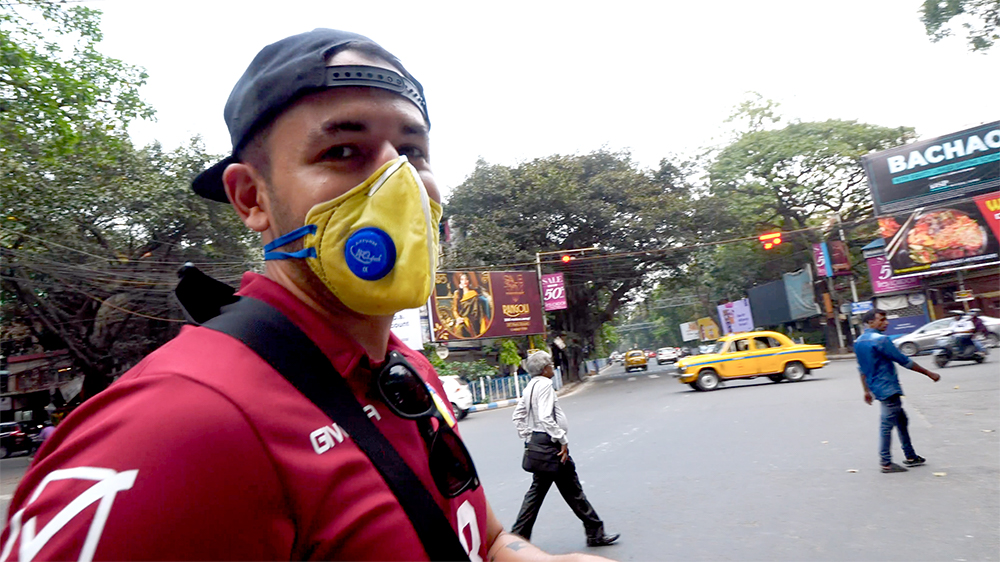 We were heading down Park street, which is one of the busiest streets in Kolkata. We passed an Ambassador taxi, which are a classic symbol of Kolkata, even though they’ve stopped making them. The best place to see them is the airport! 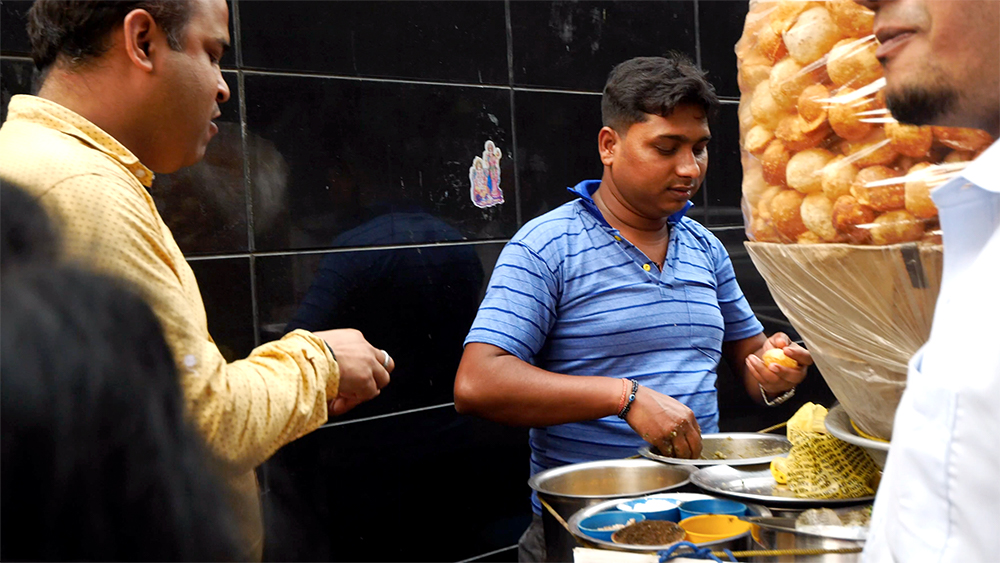 We passed some vendors, including a pani puri vendor, but not the one we were looking for. There, Carlos met a fan and told me that this area is packed with cheap street food.

I went from freezing in Bhutan to boiling in Kolkata. We arrived at the pani puri vendor and used some hand sanitizer before we started. We also gave some to the vendor, and then it was time to eat! 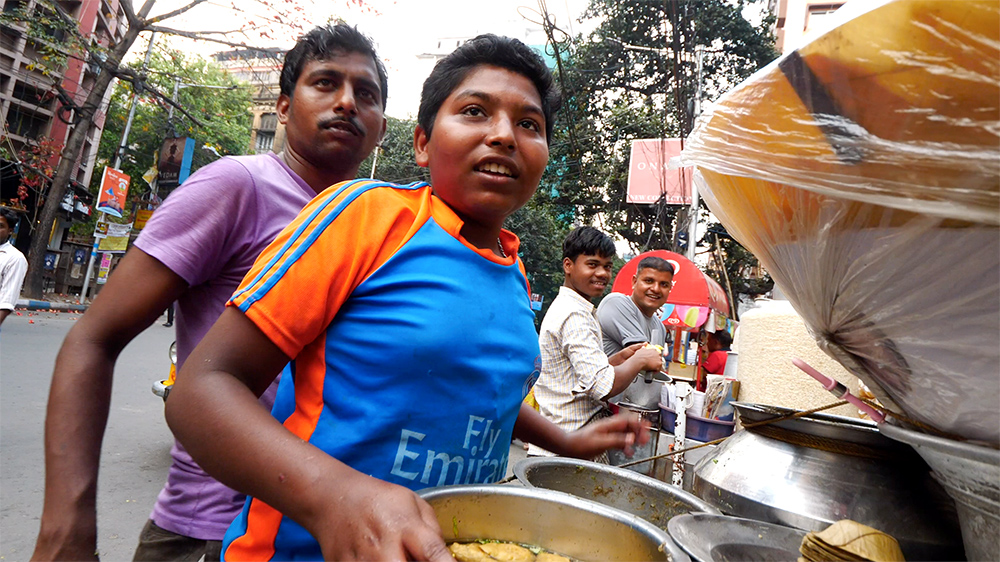 Pani puri, puchka, and golgappa are regional names for the same dish. It consists of a flatbread called puri, which puffs up into a crispy, hollow ball when it’s fried. The puri is then filled with a potato (aloo) mixture, a spiced water called pani, and different chutneys. They’re the ultimate Indian street food because they’re super cheap and you can eat a lot of them without getting full! 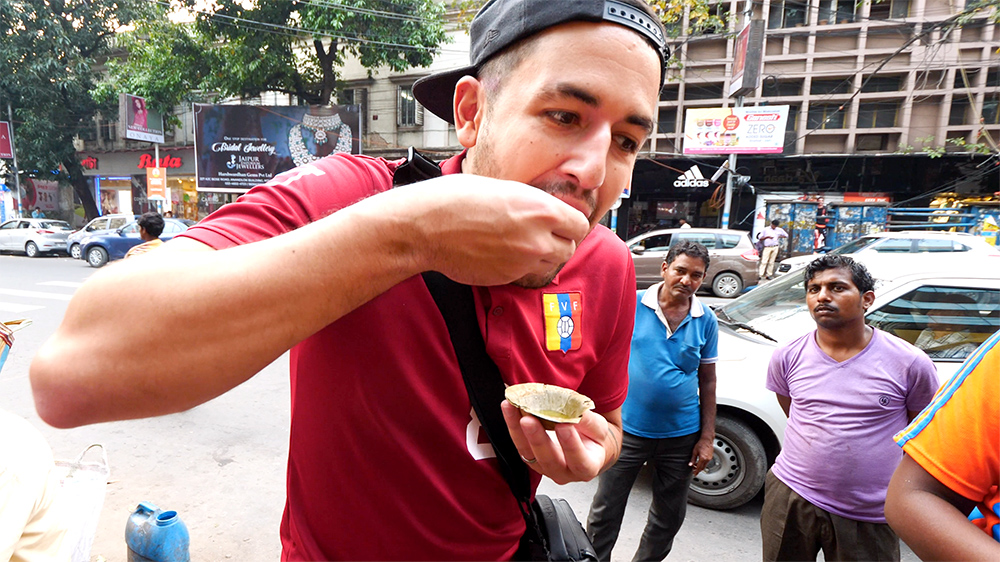 Carlos went first. He really liked the aloo mixture. He downed the first six easily and then it was my turn. It had been a while since I’d had one, but they’re the best thing on the planet. 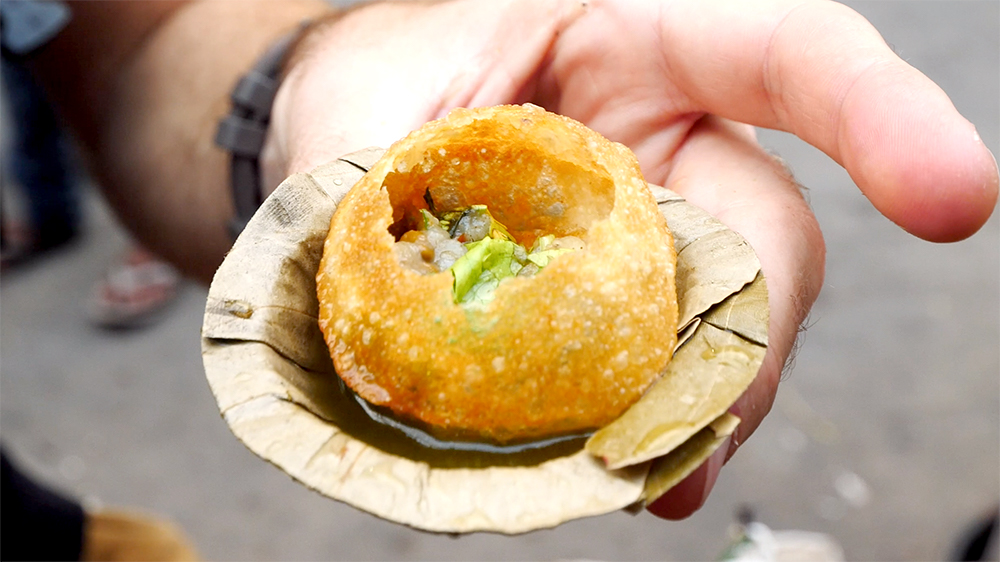 It was so yummy and crunchy. I loved that it was spices and that the pani went down smoothly. Then, I continued on. I felt like I could do at least 30! They were filled with pani, so I couldn’t help but drink the pani from the little bowl. I downed the next five easily! 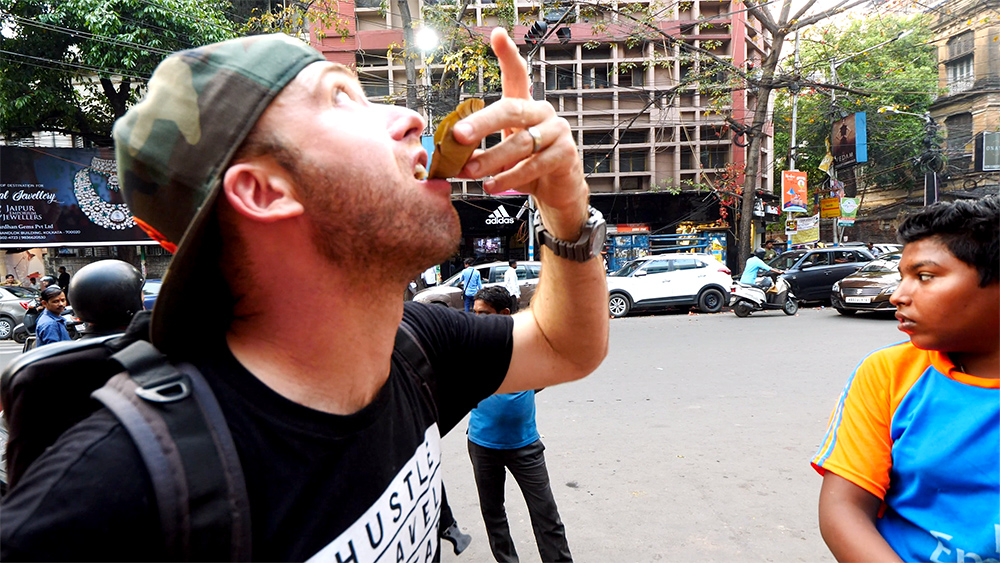 Then, Carlos went again for the next round. Our young vendor was a beast at making the puchkas. He was so fast! Six more puchkas later and Carlos was at a dozen. Then, it was my turn again. They were so tasty! For the last one of the second round, he gave me a bigger puri. I poured the pani into the puri and downed it!

Round 3 began with Carlos. After a bit of confusion over how many we had both eaten, Carlos got a special puchka and an everyday one. One is wet, the other is dry. He prefers the wet ones! 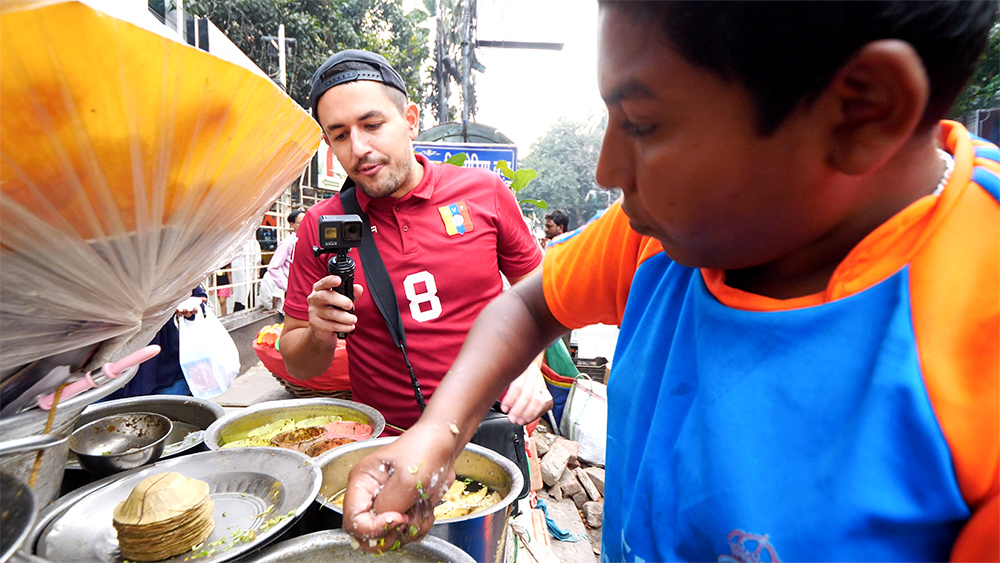 Then, it was my turn again. He filled it with pani. It was the sweetest one ever! I reached 20. The vendor said the most he’d seen someone do was 31, so we were determined to do 32 at least! I had 10 more to go. He filled the next one with sweet water, which was the best one! 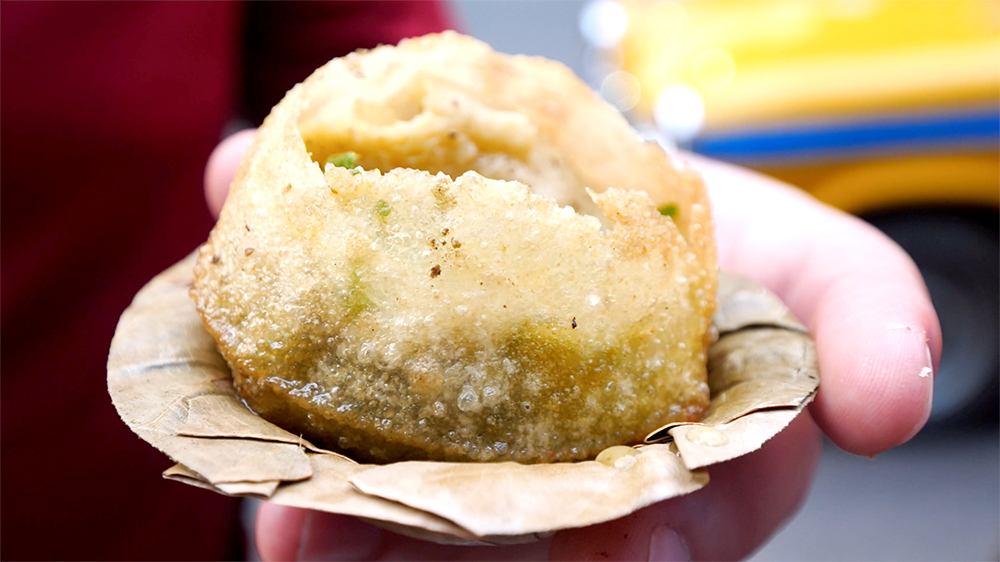 I was at 28 and downed another one. It was crunchy, spicy, mushy, and a little sweet. Our vendor went all out for the last few. We both loved the sweet water one. I needed four more. After so many, they get really filling. The final one was super filling!  In all, we both beat the record of 31 and ate 75 in total, which came to about $7 USD for 75 puchkas. I paid our vendor 1,000 rupees/$13.53 USD, which included a tip. 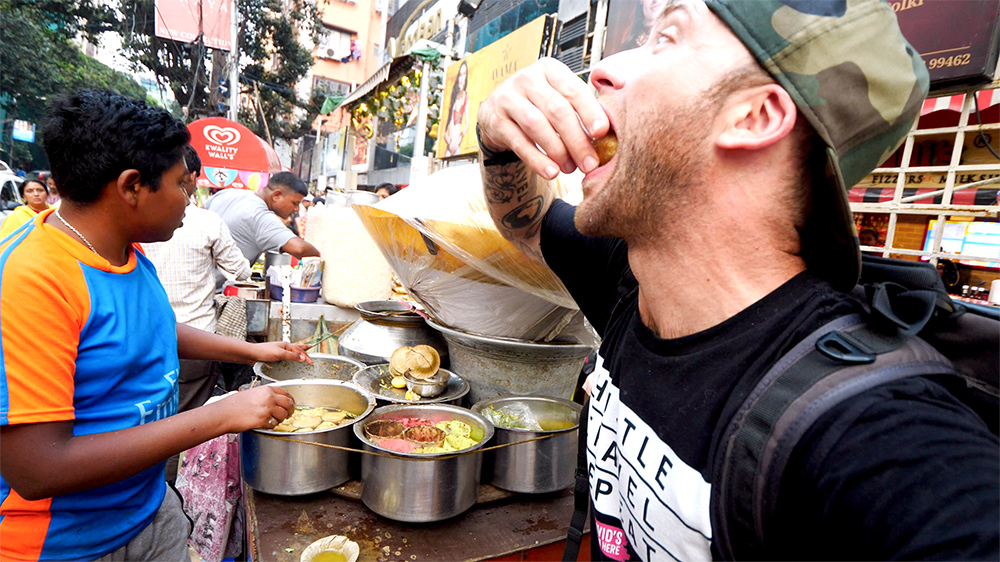 What an awesome unlimited puchka challenge where we downed pani puri / golgappa in an epic Indian street food challenge in Kolkata, India! We tried four different varieties and they were amazing, but we were both stuffed! Huge thanks to Carlos for taking me on this Kolkata adventure. Subscribe to him on YouTube and follow him on Instagram! 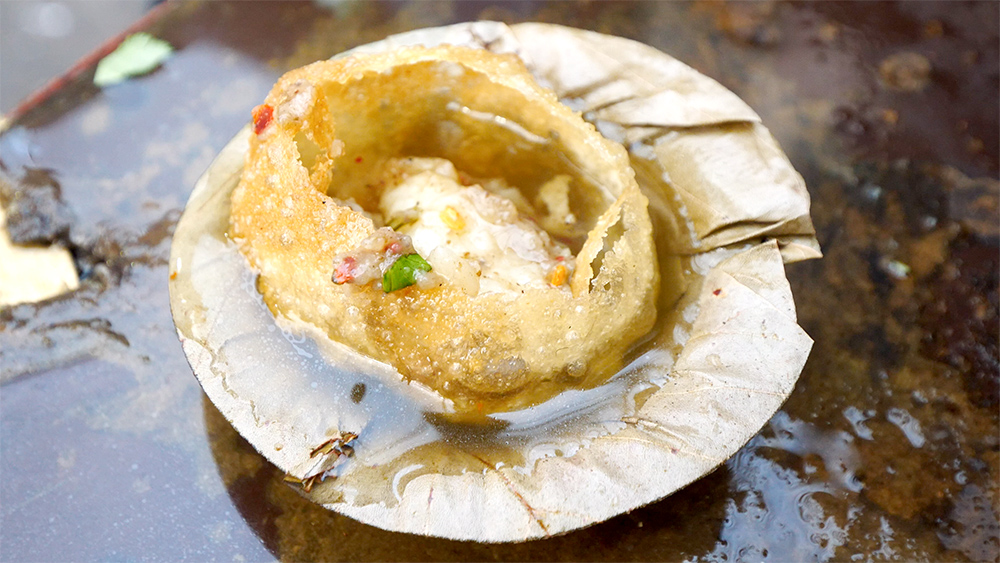 I hope you enjoyed coming along on our puchka / pani puri / golgappa Indian street food challenge in Kolkata, India! If you did, please give this video a thumbs up and leave a comment below. Also, please subscribe to my YouTube channel and click the notification bell so you don’t miss any of my travel/food adventures around the world!