After spending a day exploring the city of Kochi in Kerala, India, it was time to hit the highway for a road trip to Calicut, also known as Kozhikode! Come along with me and my boy Ebbin as we head out on a multiple-town south India street food tour through Kerala that took us through Thrissur, Kottakkal, and eventually Calicut, where I tried some mackerel biryani! Let’s go!

My afternoon started in Kochi, the commercial capital of Kerala. We’d be making the 6-hour drive north to Calicut and along the way, we’d make several stops to try as much Indian street food as possible! I couldn’t wait to try avil milk and eat in Calicut! 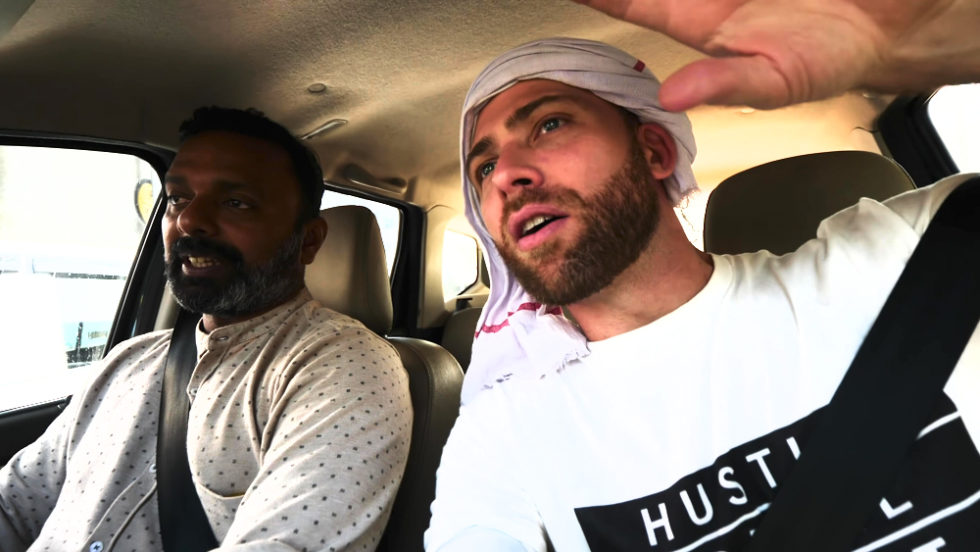 This area of the city was completely different from the old town, which is Fort Kochi. This was the more modern city. The metro system covers over 30 kilometers all around Kochi and we drove under it nearly everywhere we went in the city! 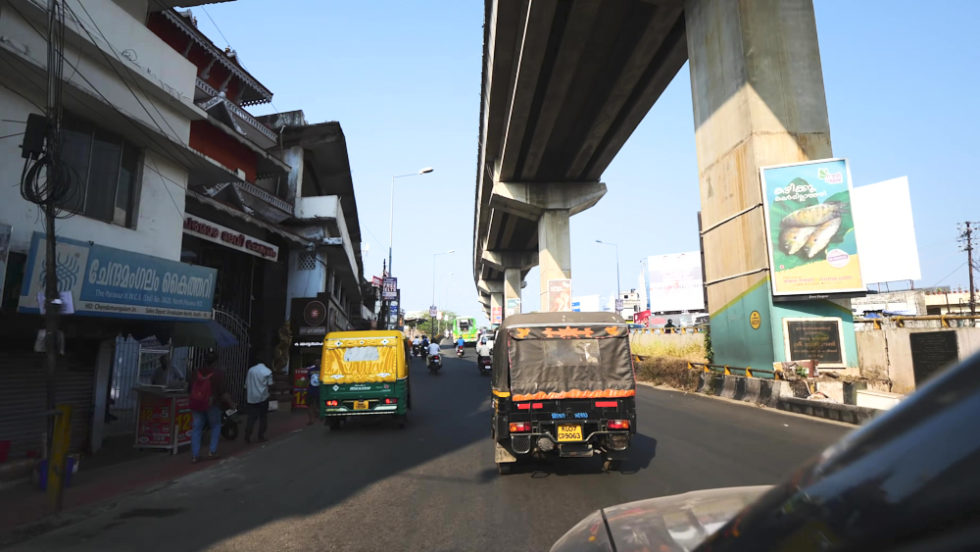 We were going to follow the road straight to Thrissur. We had been on the road for about 90 minutes and still had another 20 to go until we reached Thrissur. The road was well-paved and no potholes, and very little traffic due to less junctions along the road. I was really hungry and the sun was starting to set, so I couldn’t wait to get to Thrissur! 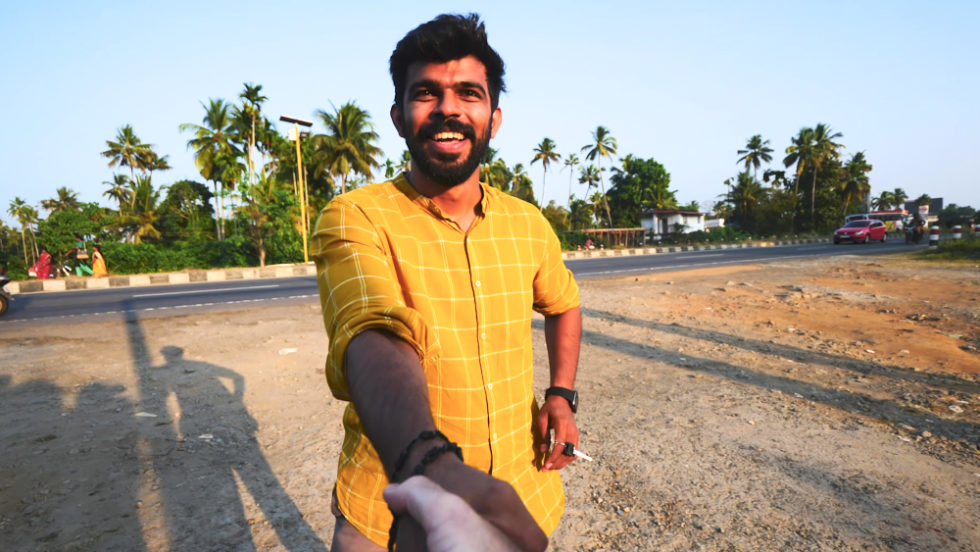 About 16 km from Thrissur, we stopped at a roadside tea shop to have some chai. Ebbin got some banana fry and we got some lemon chai. It was super hot but good! My throat had been scratchy and it helped a lot! I met a guy there who took me across the road to a small shop across from the tea shop. There, we’d try some pork and mutton intestines! I had a feeling this south India street food would be fire!

I watched them cook up some buttery tapioca with pork, coriander, and onions. It looked phenomenal! It contained pork fat and was almost like bacon mixed with mashed tapioca. The tapioca’s consistency was almost like mashed potatoes. I hadn’t had much pork on this trip to Kerala, but this was excellent. It was packed with flavor. The coriander changed the whole game! The onion also gave it a nice crunch. 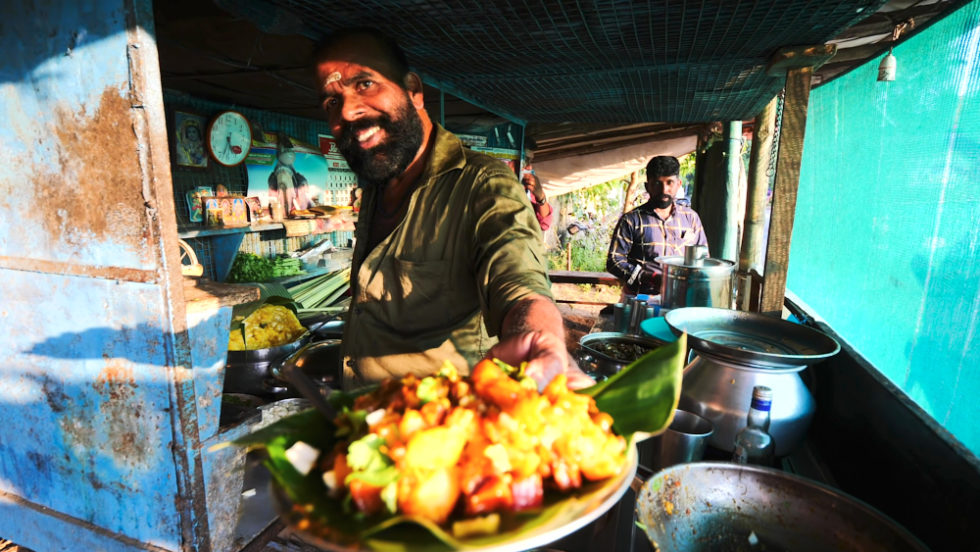 This dish reminded me of a lot of Latin-American dishes, where they mix mashed potatoes with pork. I got a hot chili in it! This recipe is 40 years old. If you love pork and mashed root vegetables, this is the dish for you! Even though I loved it, I couldn’t eat it all because I still had some mutton intestines to eat! It was like a taste of Latin America in Kerala! 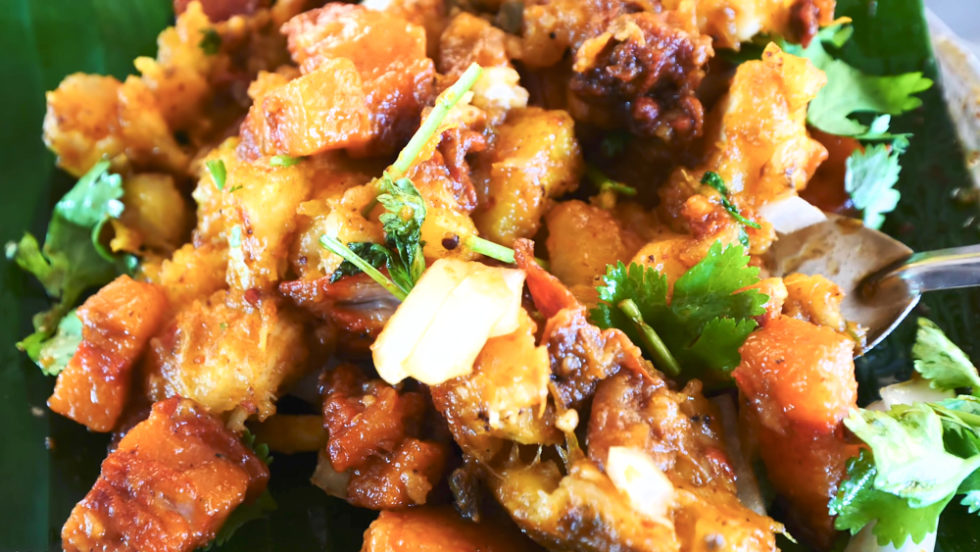 I got mutton intestines, mutton brains, and mutton liver. They were all topped with onion and coriander. It looked amazing! I knew it would be my favorite dish ever. Mutton brains are so good. I swear, all south India street food is out of this world! 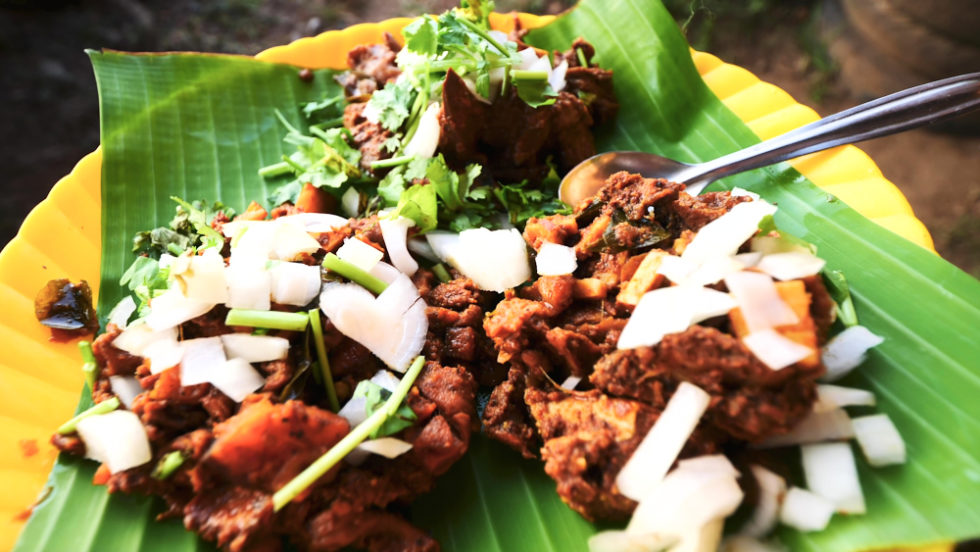 I started with the intestines, which were so incredible with the coriander and crunchy onion. The masala on it was also super nice. The intestines were cleaned well and super spongy. The brains were a little different from the ones I remember. They were a little harder and tougher than the others I’d had in the past, but were still tender. It broke apart easily and was really dense.

Then, I tried the mutton liver. I love liver and it did not disappoint. It was earthy and contained some black pepper and really nice masala. The onions helped calm down the heat. It even contained bits of coconut! The coconut gave it a super tropical burst of flavor and tasted like the coconut milk that had been extracted from the inside. The intestines and liver were the best. It was one of the best mixes of mutton I’ve ever had, and some of the best south India street food I’d had in Kerala so far! 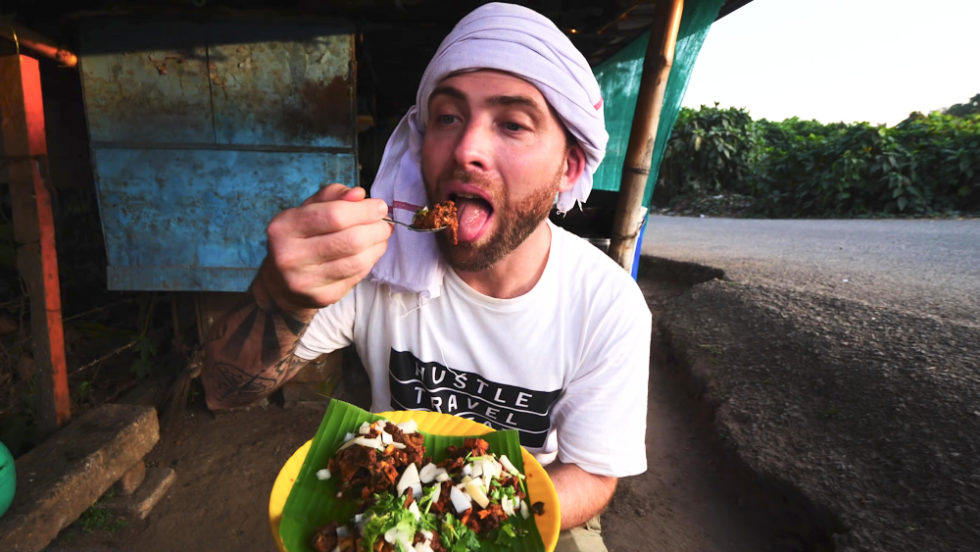 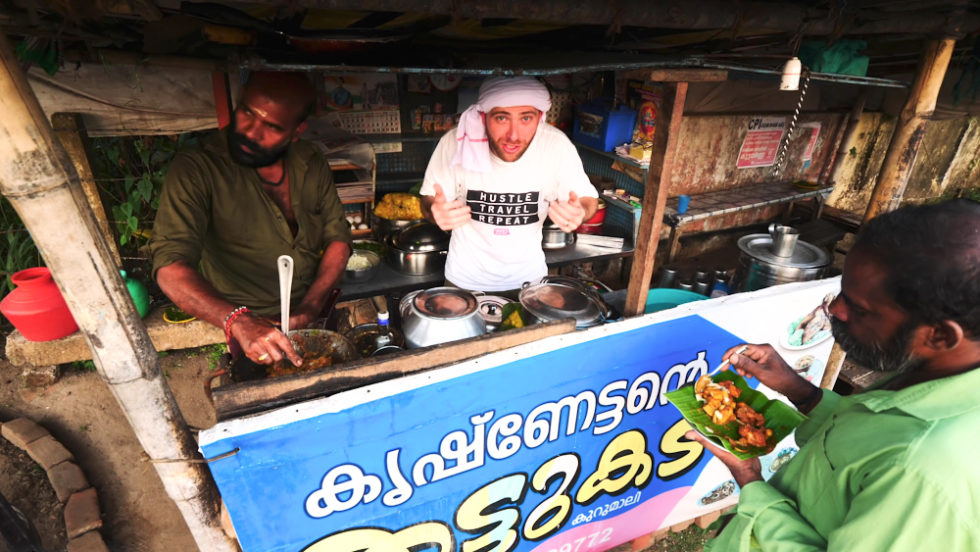 Then, I crossed the highway and rejoined Ebbin on the road. We drove through Thrissur. The sun had just set, so the city was lit up like a Christmas tree. There was a famous temple there, but we didn’t have time to visit. We still had 3 hours and 20 minutes to go before we reached Calicut. I stopped quickly to get some sugarcane juice, which I had been seeing everywhere. I needed something to cleanse my palate, as the mutton taste was still all throughout my mouth.

Sugarcane juice is my favorite thing to drink in India. I chugged my glass in one go! It was super refreshing and sweet and only cost 20 rupees/$0.26 USD. 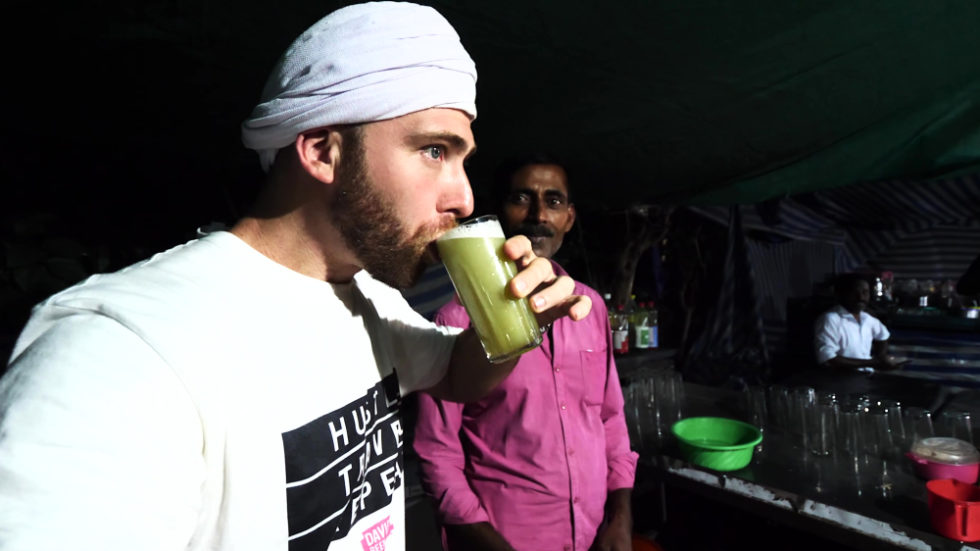 I hopped back in the car. With 20 minutes left before we reached the place with the avil milk, I noticed that the road was very narrow here in the northern part of Kerala. There are lots of junctions and it was pitch dark at 8:42 p.m. I saw lots of fishermen coming out. Kerala is one of the two states that consume the most fish, and any fish you see out at night are freshly caught. 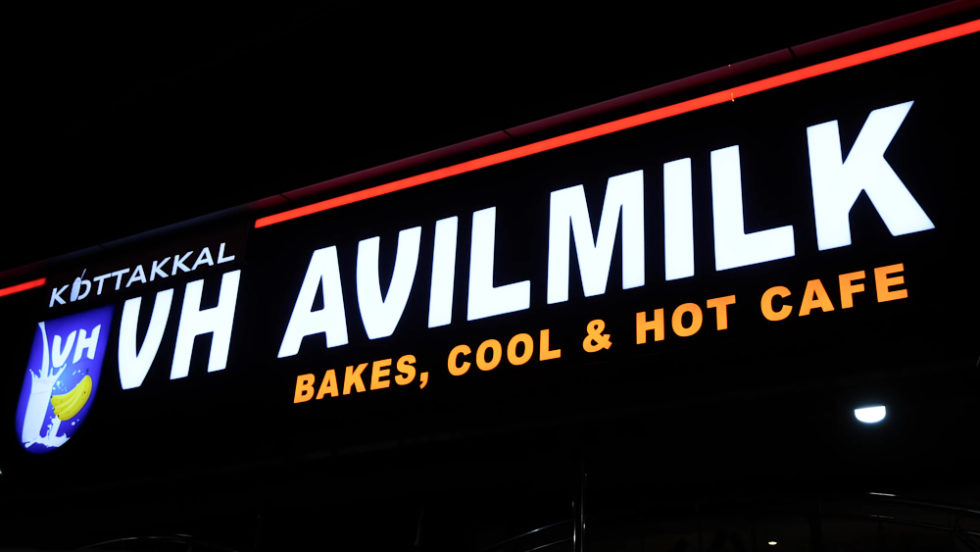 We arrived in Kottakkal, where we stopped at VH Avil Milk to continue our south India street food tour. It’s an open-air café that sells lots of bananas, nuts, snacks, honey, and more. They have nut milk, pista milk, chocolate milk, dates milk, strawberry milk, and more for 60 rupees/$0.79 USD each. 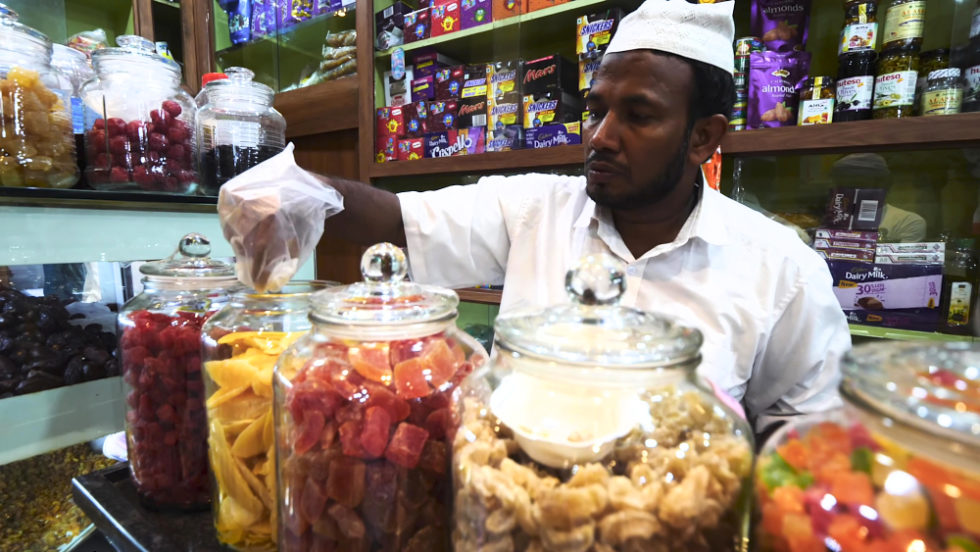 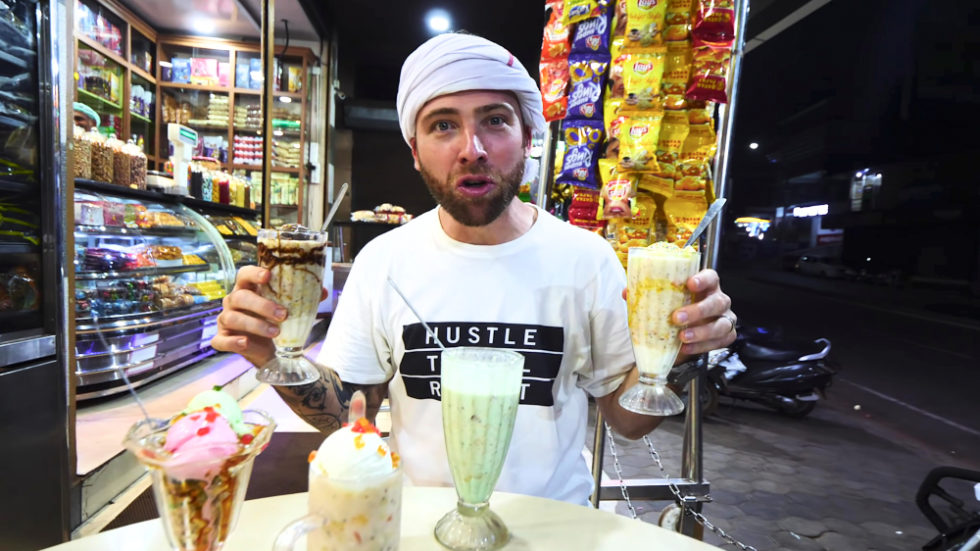 The dried fruits and nuts were crunchy, while the puffed rice was airy. There were a huge amount of dried fruits in it. I love falooda, which is a popular dessert that includes milk, ice cream, jellies, and vermicelli noodles, but this was even better than falooda! It contained dried pineapple, kiwi, and bananas, but the puffed rice is what really made it!

Then, more avil milks arrived at our table! I couldn’t eat them all, so I just wanted to stick to mine and give away the others to Ebbin’s friends so it wouldn’t go to waste. My avil milk was like all of the flavors of Kerala mixed into a creamy, pudding-like, rice-y drink. 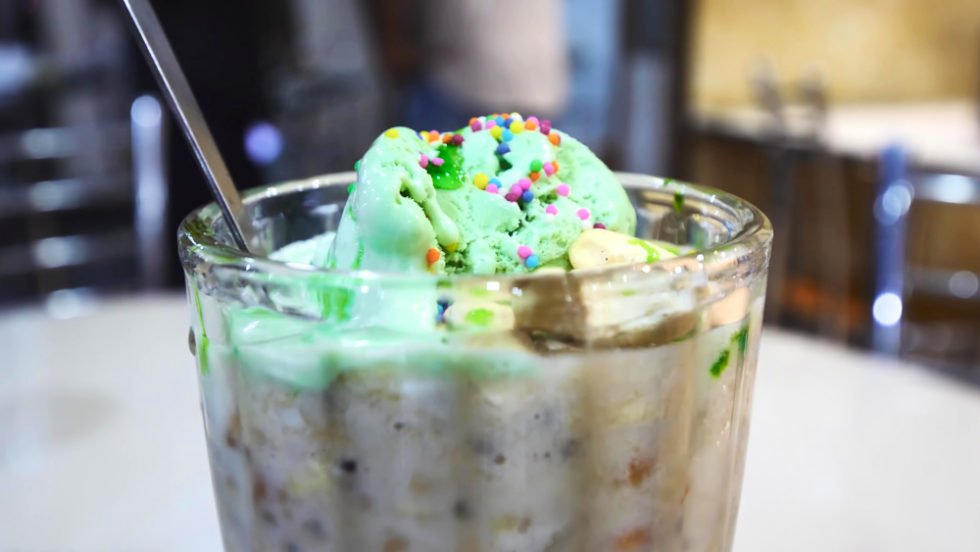 Everyone had left and I still had one avil milk left: the special, which doesn’t contain any dried fruits, just real, natural fruits. The first bite was a burst of everything! I loved the kiwi and pineapple, and there was lots of banana. The coconut ice cream on top was incredible, too. In addition to the real fruit, it also contained basil seeds. It was so refreshing in the heat. This one was cheaper than the others at 40 rupees/$0.53 each. It’s a good deal! 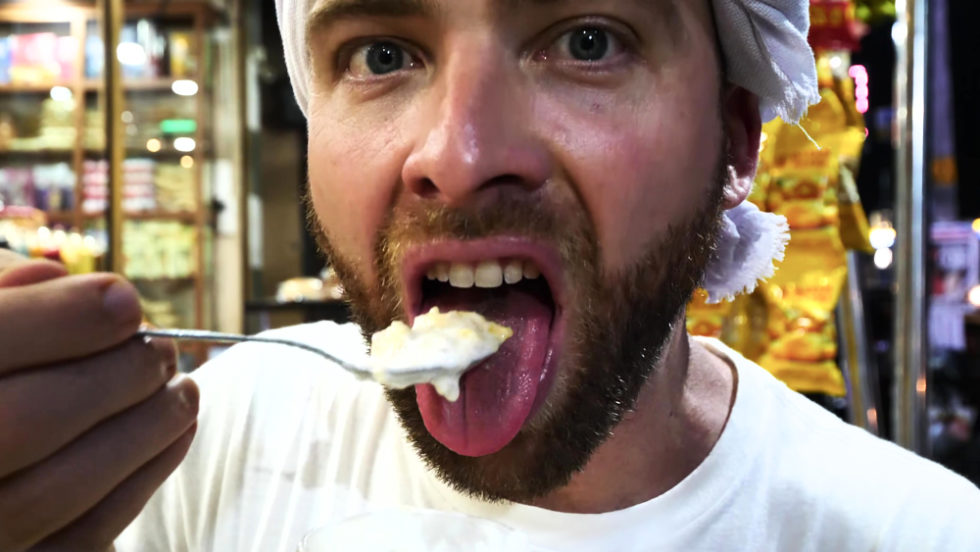 With another 80 minutes to go before we arrived in Calicut, we hit the road again. I felt like I was going to fall asleep. I was so full. Finally, we arrived in Calicut, also known as Kozhikode. It’s the third-largest city in Kerala behind Trivandrum and Kochi. Kannur is the fourth-largest. It was 11 p.m., so the city was asleep. But we still had more food ahead of us on our south India street food tour: some biryani! 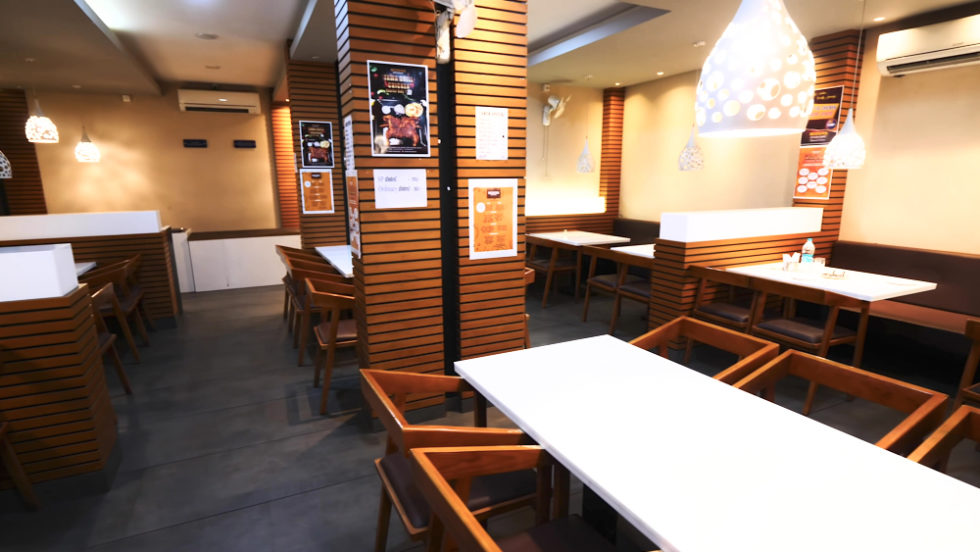 Northern Kerala focuses heavily on biryani. We’d eat some mackerel biryani here and then eat more as we made our way up to Kannur. We stopped at Modern Restaurant, which has nice woodwork and modern, sleek tables. I got some tender coconut milk. It was so pure. The coconut milk was like having a coconut smoothie. It was better than regular coconut!

Then, we got some squid, mackerel biryani, and Kerala chicken with dry red chilies, and fried kingfish. I was tired but so excited. I started with the squid. The curry leaves, chilies, and masala gave it a nice flavor, and I loved the taste of coconuts and shallots throughout. The coconut gave it a nice, tropical taste and the masala was super creamy. 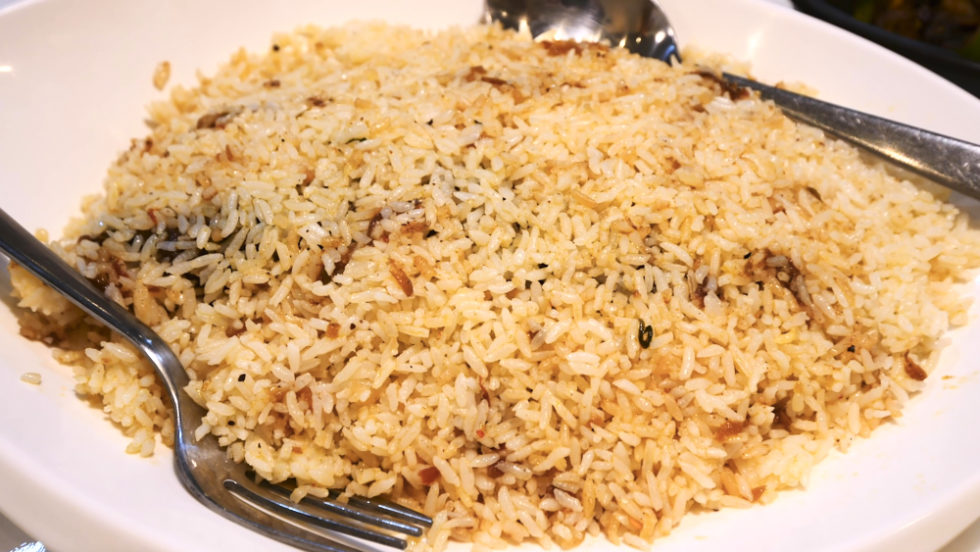 The chicken with red chilies and shallots was nice and crunchy and had some heat to it because of the chilies. I’d never been anywhere where they had so many spices. Then, I tried the kingfish fry with curry leaves. It wasn’t too hot and had no bones except for the main one in the middle. The meat was super soft. You can never go wrong with fish fry in Kerala! 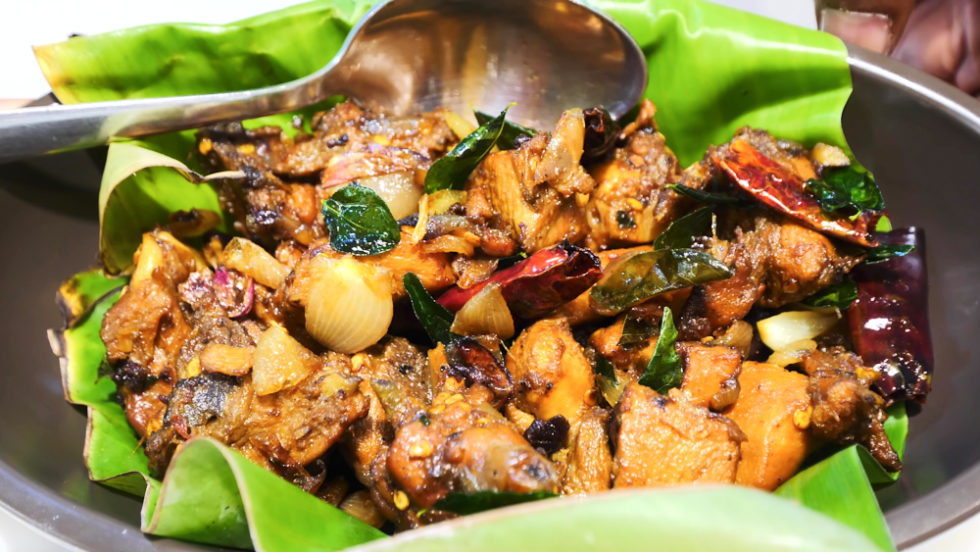 They brought us some pineapple with mint, which pairs well with the mackerel biryani. I tried the biryani first and pulled the fish out. First, I pulled off some flesh with my spoon to be careful of the bones. I accidentally swallowed a bone, but it was OK. I’d never had fish biryani. I tried the biryani with the onions, shallots, and masala, which was really good. This biryani was made with short-grain rice, rather than the long-grain rice you get in Hyderabad. But although it was good, the squid was my favorite! 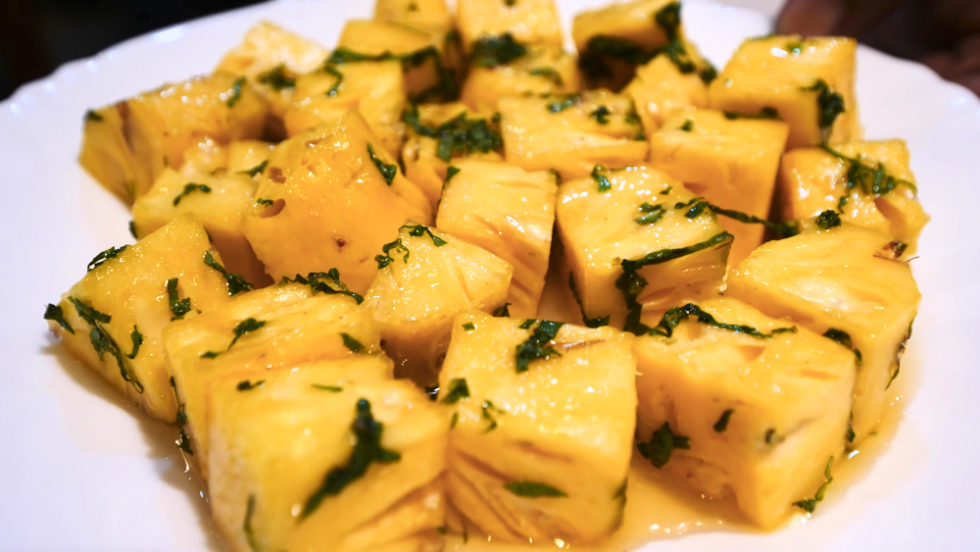 Then, I dug into the pineapple. The mint really pulled out the flavor of the pineapple, which was full of juice. I wanted to start making it at home!

Check out the 10 Things to See and Eat in Kozhikode, Kerala, India

What an incredible south India street food road trip through Kerala! I have to thank my boy Ebbin for taking me around his amazing state. Follow him on Instagram and subscribe to his food and travel YouTube channel! 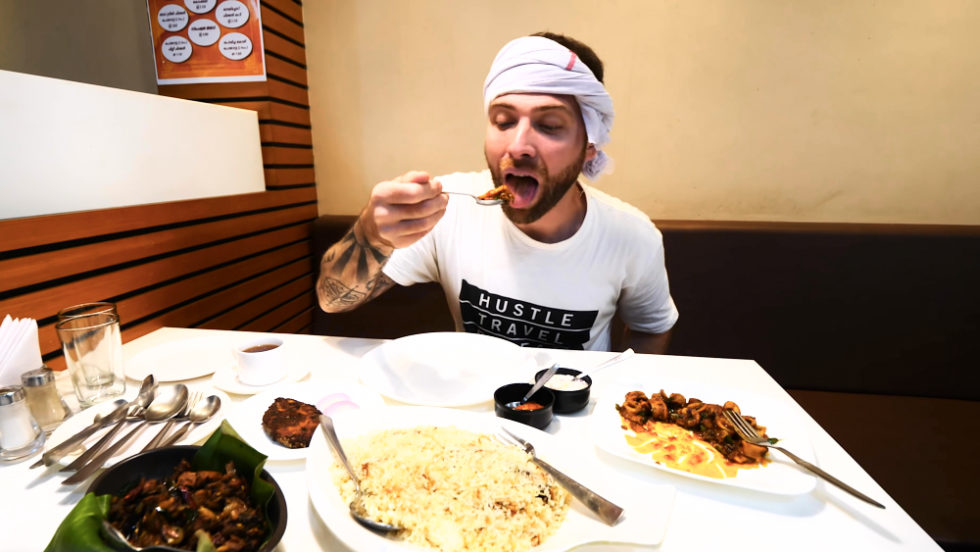 I hope you enjoyed coming on this south India street food tour road trip through Kerala with me! If you did, please give this video a thumbs up and leave a comment below. Also, please subscribe to my YouTube channel and click the notification bell so you don’t miss any of my travel/food adventures around the world!