The eleventh day of my epic trip through Kerala, India continued after my awesome Theyyam experience. I headed out to have an Indian seafood breakfast at a fish market in Kannur, Kerala, India! Come along with me on my Kannur fish market tour! 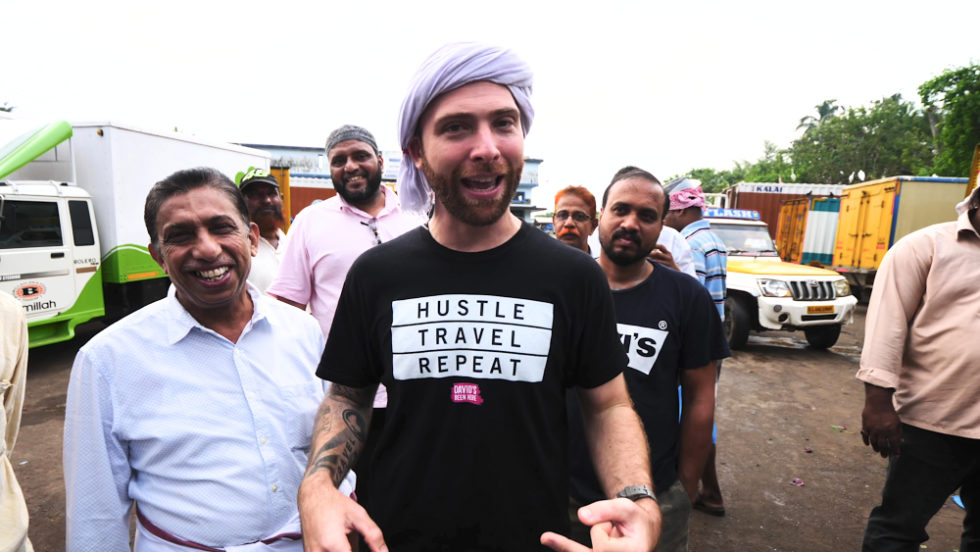 We headed to where the fish are sold, not where they’re auctioned. I love coming to fish markets because they’re a big spectacle. There’s so much to see, from the butchers cutting the fish to the vendors, to the customers clamoring for them. I saw a huge sailfish, as well as kingfish, marlin, shrimp, and more. 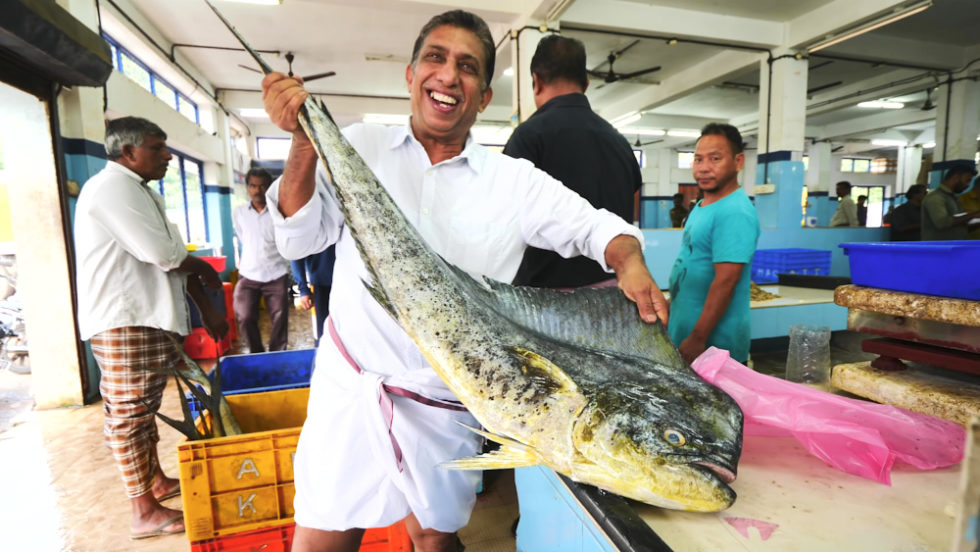 Then, we saw where the butchers cut the bigger fish and sell them to hotels and more. They take off the scales and cut them into pieces. I watched them break down the massive marlin. It’s raw and hardcore, but it’s super authentic! It’s a wet market, so they’re constantly cleaning and the water all falls on the floor.

Next, I saw some stingray and smaller sailfish. We also saw where they load the fish to take them to Karnataka and other cities around Kerala. Kannur is close to Karnataka, so they provide them with a lot of fish. I watched the butcher break down our kingfish. He let me cut a slice but I cut it bad. It was hard! As I left, I saw the crates of fish loaded with crushed ice. The entire trucks were filled with tuna and marlin. 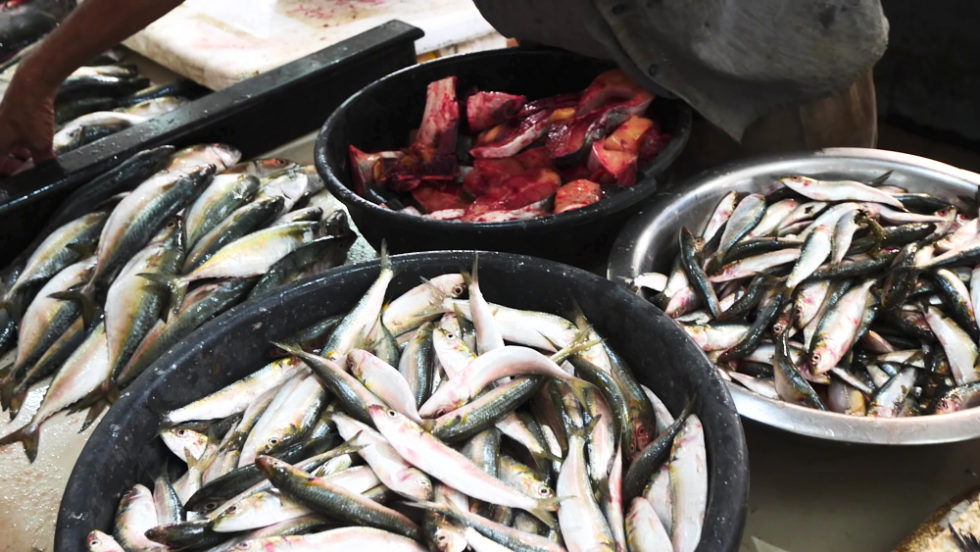 Next, we headed to the harbor, where the boats come in and people buy them in bulk. Usually, this is private, but here in India, it’s public. This market is directly on the beach and is mostly for locals and tourists, while the bigger one is for hotels and restaurants and exporting. I could see prawns, sailfish, tuna, and more! The fishermen auction off their catch to the men there, who then sell the fish for a profit again and again. Come here at 6:30 a.m. to see them auction off the fish to the mini vendors! 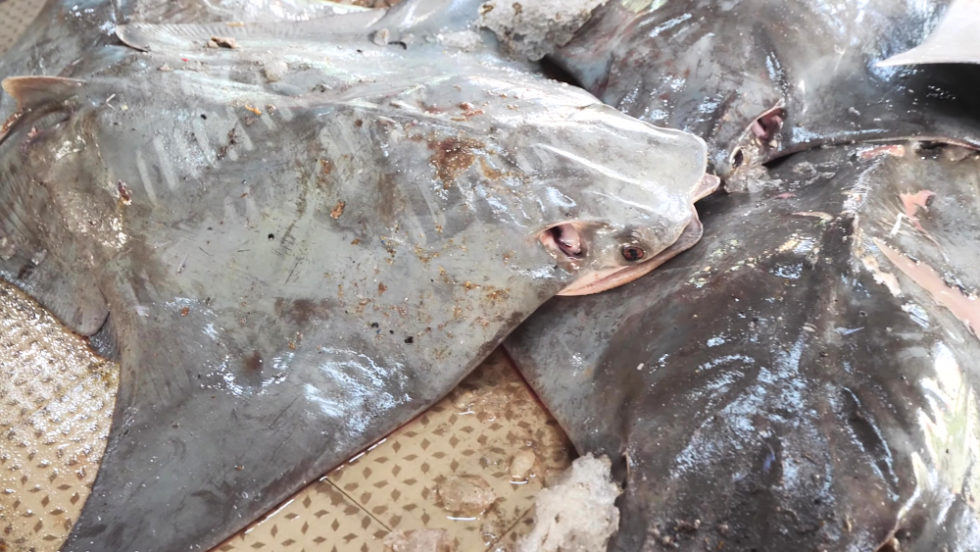 Before we left, we got some chai. It was creamy and frothy. I loved how hot and milky it was. Then, Mr. Haris peeled me a fresh, local banana. It was organic and so sweet and ripe! 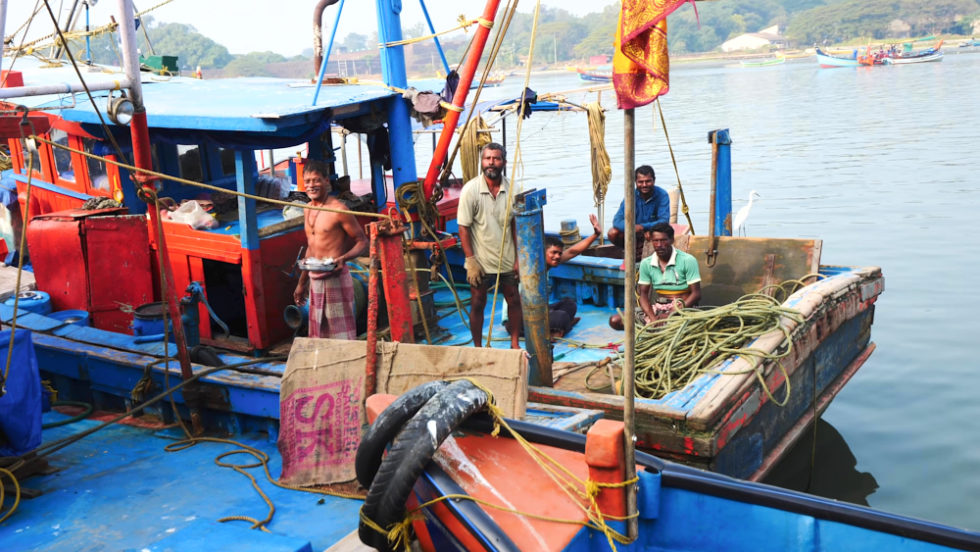 There are also lots of fruit there like watermelon, oranges, and more. Then, we went to go see the boats and casting nets. All of the boats were parked there. They go out for a few days at a time and then come back. I watched some of the fishermen there make a huge, red casting net. The boats are really big, and I got to hop across them!

Then, it was time to head back to the resort. I was ready to eat! Before we got there, we came across a mussel vendor. They had never-ending mussels. I had never seen mussel vendors on the street in a city like this. And the mussels were really big! Mr. Haris bought some for our Indian seafood breakfast feast! 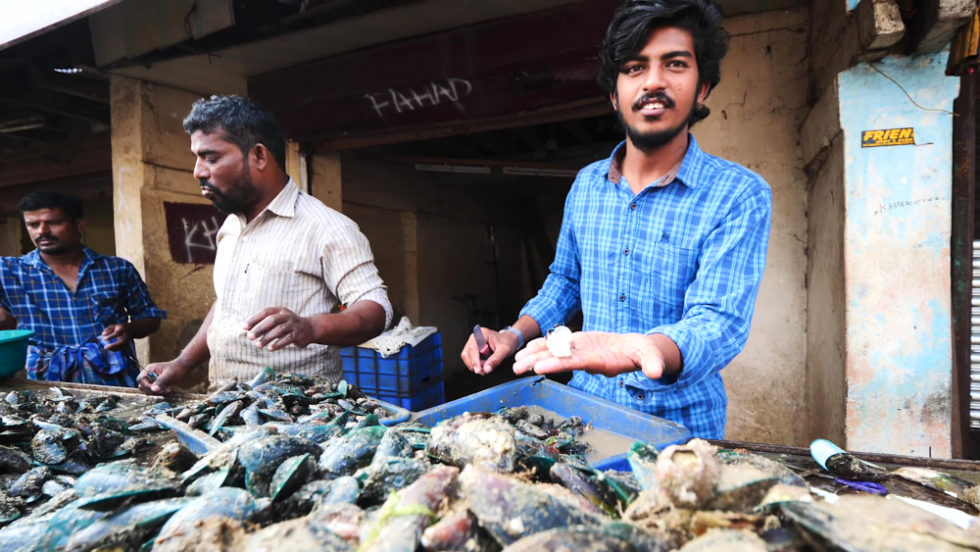 We took a shortcut back to the resort. It was a narrow road with no traffic that took us past the backwaters, palm trees, cows, and more. I couldn’t wait to have some mussel fry and fish curry! 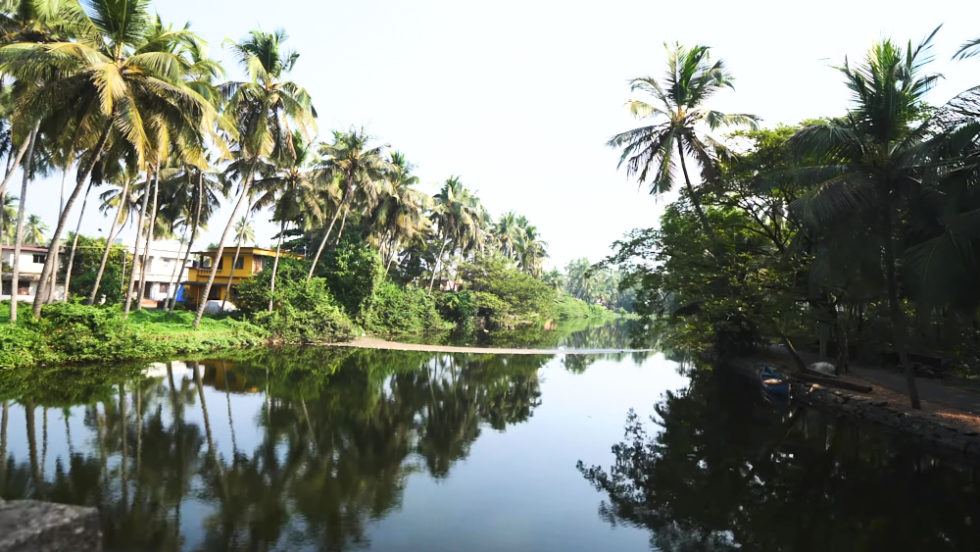 Back at the resort, I met back up with Ebbin and headed to the kitchen. I watched them clean the fish, marinate it in chili powder, tamarind, turmeric, rice flour, and garlic. Then, he throws it in the hot coconut oil! It was going to be spicy! Mr. Haris got this fish recipe from his grandmother! 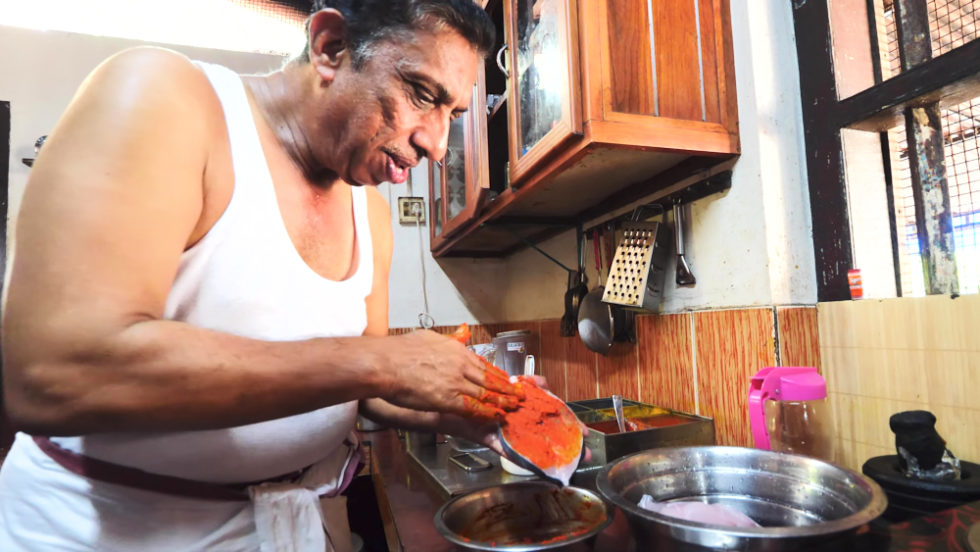 The aroma was amazing but the fumes from the chilies hit me hard! Along with the fish, Mr. Haris also made puttu. Then, the chef there made the mussel pepper fry with Kashmiri chilies, turmeric, ginger-garlic paste, and pepper. He fried it up in a big skillet and added curry leaves on top. Meanwhile, they placed the puttu on a leaf Mr. Haris cut decoratively. 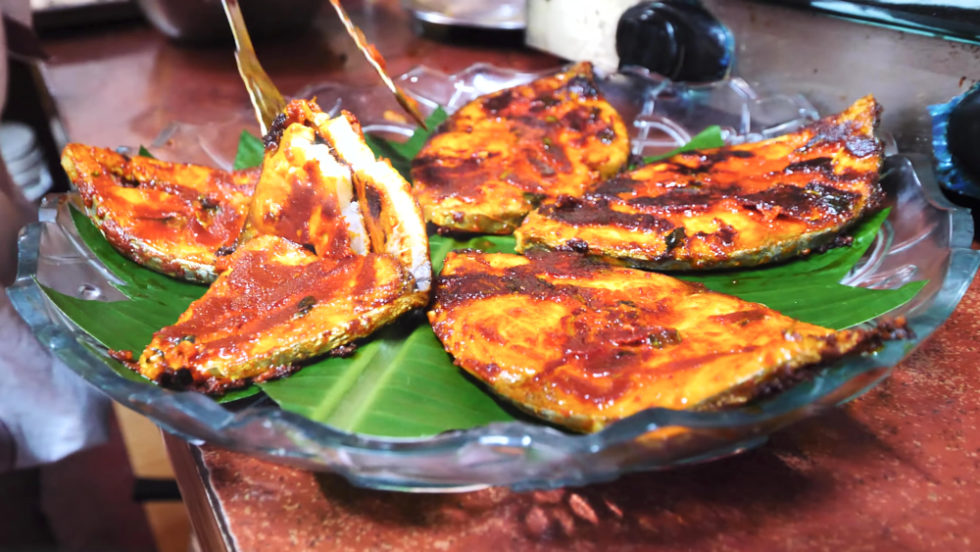 At our table, we had a potato mash containing vegetables. The fish fry and mussels also arrived. We had a view of the ocean, where there were people fishing for mussels!

Finally, it was time to dig into our Indian seafood breakfast in Kerala, India! We started with a steamed rice dish containing coconut and jaggery. It was nice and sweet and felt like compacted rice. Then, we moved on to the potato mash with vegetables and chilies, appam, mussels, and fish fry. I squeezed some lemon over the fish, which didn’t have many bones. 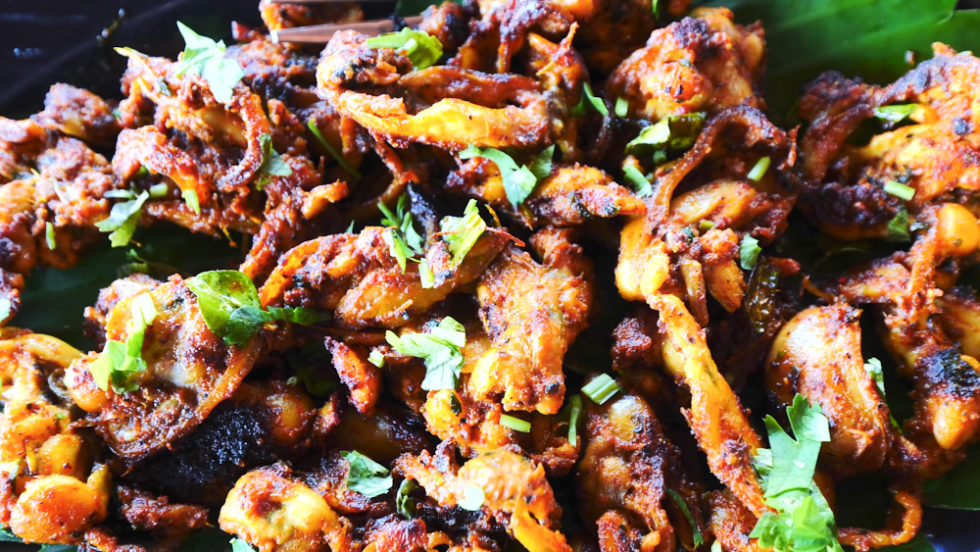 The fish contained an amazing masala that wasn’t so spicy. It was so juicy and tender, but the rice flour gave it a nice crunch. I got a bit of sand in it, but it was good, especially with the lemon. The spice level was perfect! 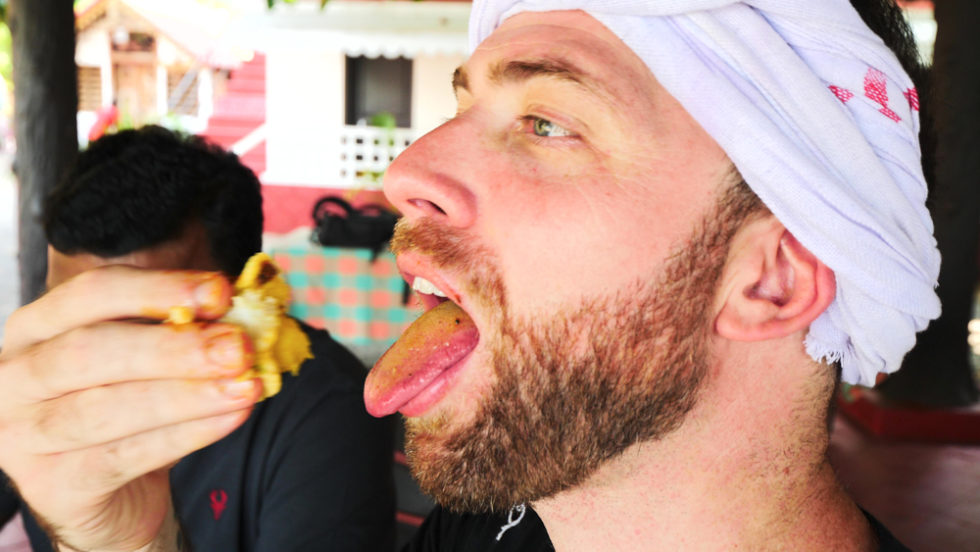 My favorite was the mussels. They were unreal! I have to give a huge thanks to my friends at the Seashell Haris Beach Home for this amazing experience and Indian seafood breakfast feast in Kerala, India! Be sure to check out their website to book a stay with them the next time you’re in Kannur. Also, remember to give my boy Ebbin a follow on Instagram, and be sure to subscribe to his food and travel YouTube channel!

I hope you liked coming with me on this Indian seafood breakfast feast in Kerala, India, please give this video a thumbs up and leave a comment below. Also, please subscribe to my YouTube channel and click the notification bell so you don’t miss any of my travel/food adventures around the world!