It was 7 a.m. and I was super hungry, so we started our northern Kerala food tour at the Bombay Hotel in Thalassery. It’s open from 7 a.m. to 10 p.m. every day. It’s one of the best restaurants in the city! There, I would have some string hoppers and egg curry. We had a lot of restaurants to hit that morning, so I wanted to keep it light. 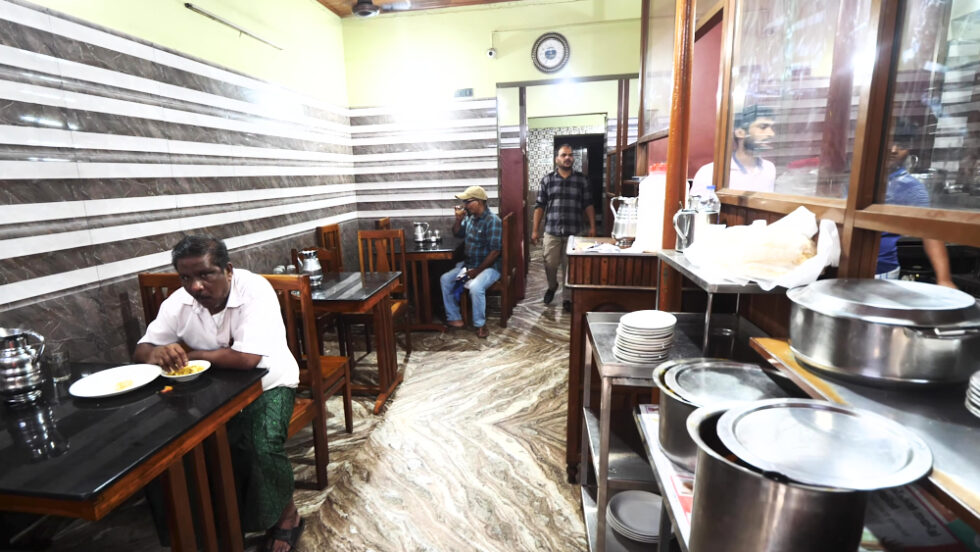 We ate on a banana leaf. The egg curry and string hoppers came with a spicy tomato curry. First, you break up the egg. The curry contained roasted onions and juicy tomatoes. It tasted like a curry I’d had in northern India. I also loved the blend between the spice level and the egg. The yolk was cooked really well! 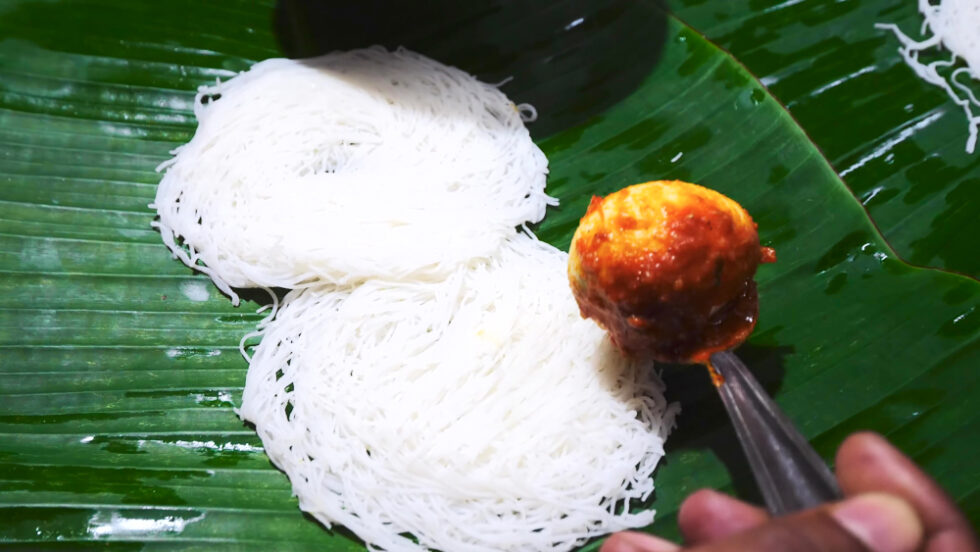 Then, I added the rest of the tomato curry on top of the string hoppers and egg. I broke it up and mixed it well with my fingers. It looked so good and tasted even better! I love some spice in my breakfast, and this really hit the spot! To top it all off, we ended with some delicious ginger chai! 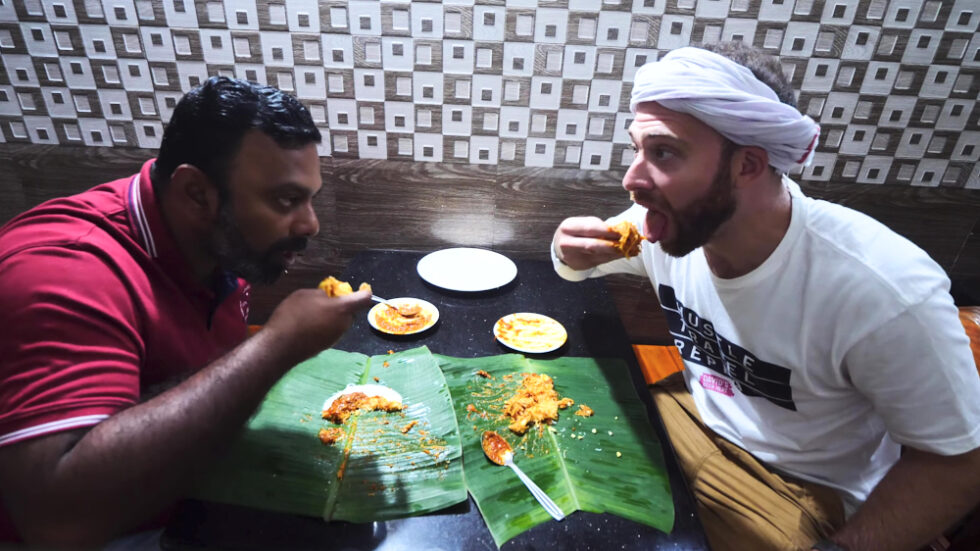 Our meal came to 180 rupees/$2.37 USD, which included meals for three people, plus Ebbin’s chickpea curry. Like almost all places in India outside of actual hotels and high-end restaurants, they’re cash only. 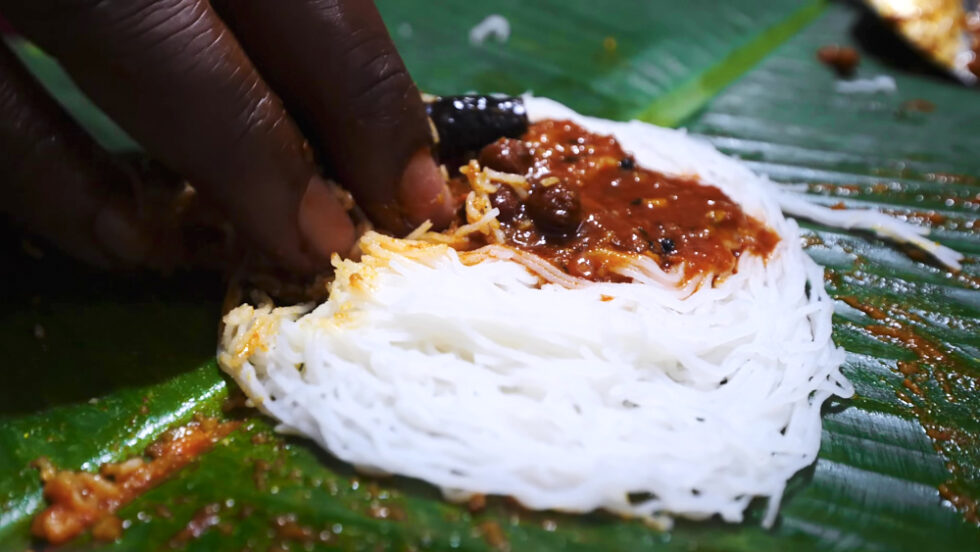 We had another spot to eat at in about an hour. On the way to Kozhikode, we would stop in Vatakara, a small town where we’d have brunch. Along the way, we passed through Mahé, a union territory that’s tax-free and is a haven for wine and liquor shops and bars.

After 40 minutes, we arrived in Vatakara and continued our northern Kerala food tour at MRA Bakery. It’s along the main road and has been in business since 1965. They have amazing-looking cakes and sweets. Some of them looked like baklava. In the back is the restaurant, where you can see vada, samosas, and more. Ebbin got me a vada, banana fry, egg bonda, samosa, potato bonda, bread pakora, stuffed plantain, and kallumakkaya (mussel fry). 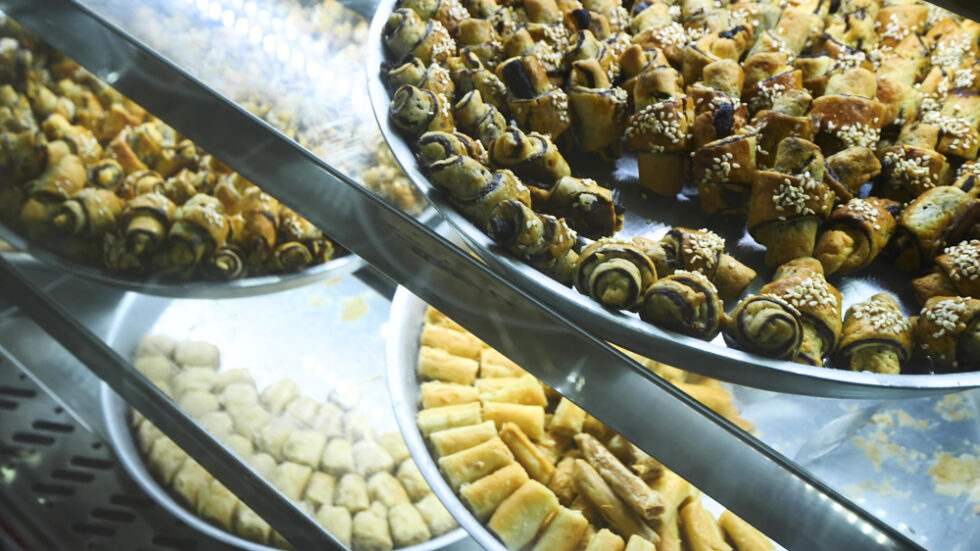 I watched the guys make some two-meter chai before we took our seats. I grabbed the mussel, the stuffed plantain, bread pakora, and more with some chicken curry. The bread pakora was almost like a fried sandwich with masala, onions, potatoes in the middle. It was a crispy sandwich with a fluffy interior and a nice amount of spice. It was even better with the chicken curry on it! The creamy, tomato-based curry was so good! 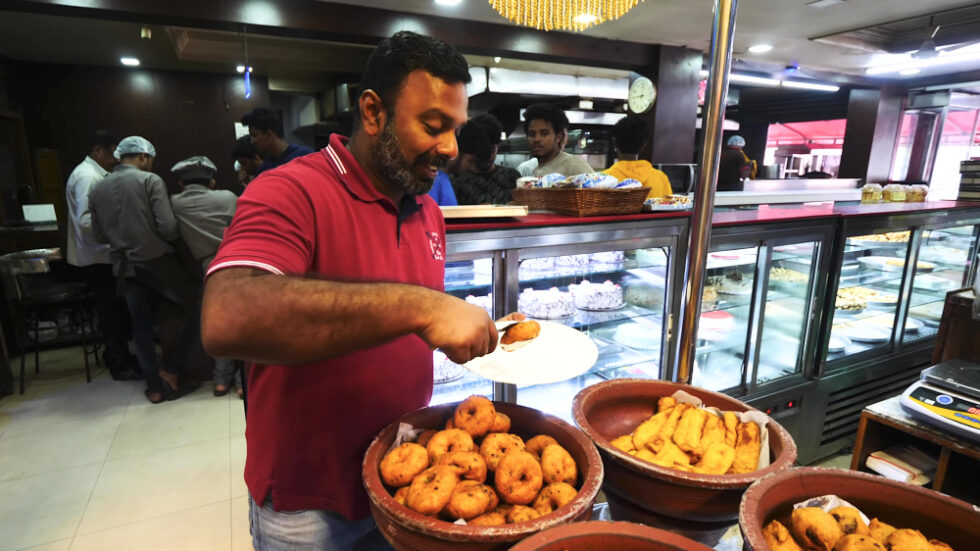 Next, I went with the stuffed plantain with the chicken curry. It was super sweet and filled with coconut, sugar, and jaggery and was like a sweetness overload! The filling is caramelized. It was one of the best banana dishes I’ve ever had!

The mussels had a fried, rice flour coating. They’re salty and have a nice masala on them! Next was the aloo bonda, which also contained coriander and other spices. It’s lightly fried and doughy and is the perfect veg dish. But it goes well with the chicken curry! 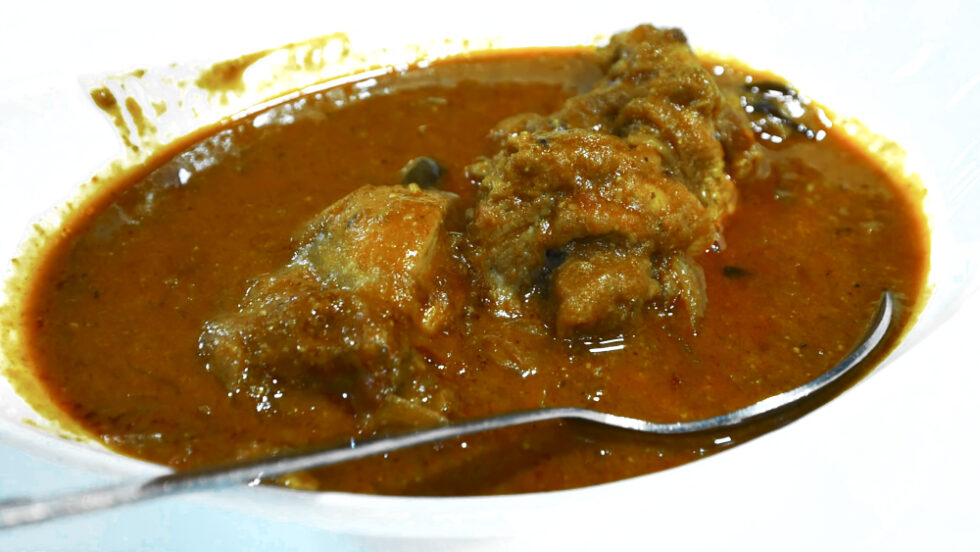 Then, we had some magic chai, which has a lot of foam on top. You mix it well. It’s really sweet and tasty. Every place’s chai is a little different, but they’re always really good! Next, we tried the vada with chicken curry. It wasn’t so crispy and absorbs the curry well. My favorite item was the stuffed plantain! When you come here, you can also try lots of snacks that aren’t fried. The owner brought me a sweet snack made of cashews before we left. 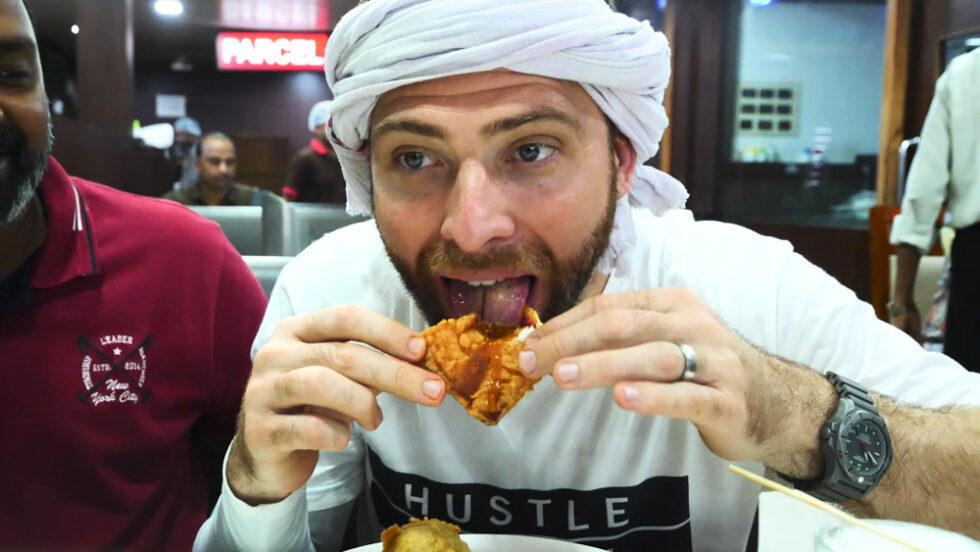 Outside the restaurant is MRA Fruits & Nuts, a market that sells fruits like bananas, grapes, oranges, apples, melons, pineapples, limes, plantains, dates, nuts, and more! I tried an amazing date that was sticky and chewy. From there, we drove on to Kappad, which is where Vasco de Gama first landed in India in 1498. He was the first European to land there, and there’s a beach there named for him. Vasco da Gama created the cape route that goes from Portugal and goes around the southern tip of Africa and back up to India. He basically started the spice trade via the sea.

The beach was beautiful and had a rocky pier, some fishing boats, and a soccer field. It’s a long beach and it was super hot out. After a bit of exploring, we drove to the Vasco de Gama Monument, which marks where he landed in Kappad, also known as Kappakadavu. It’s a pillar that looks almost like a tombstone. 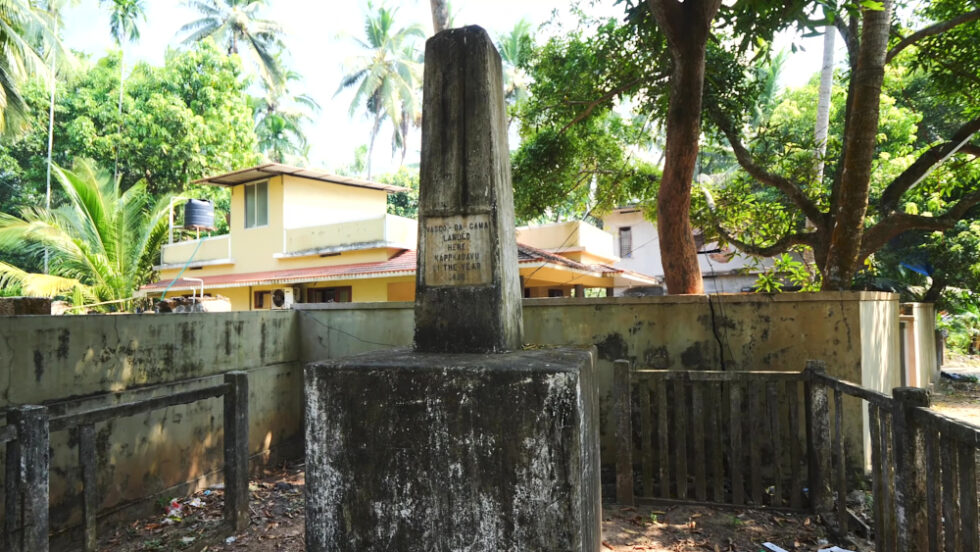 We continued toward Kozhikode and got stopped by a train. I ran up to get a close look at it as it passed! There was a second train right behind it going in the opposite direction! Then, we arrived in Kozhikode, where we’d try finish up our northern Kerala food tour with some mussel biryani. There’s so much diversity in the biryanis in Kerala. I love the mussels here. I couldn’t wait to eat them! First, we got a lime soda from a street vendor. It was super salty, almost like the ocean, but with lime. I didn’t love it, but it was a little too salty for me. It costs 10 rupees/$0.13 USD each. 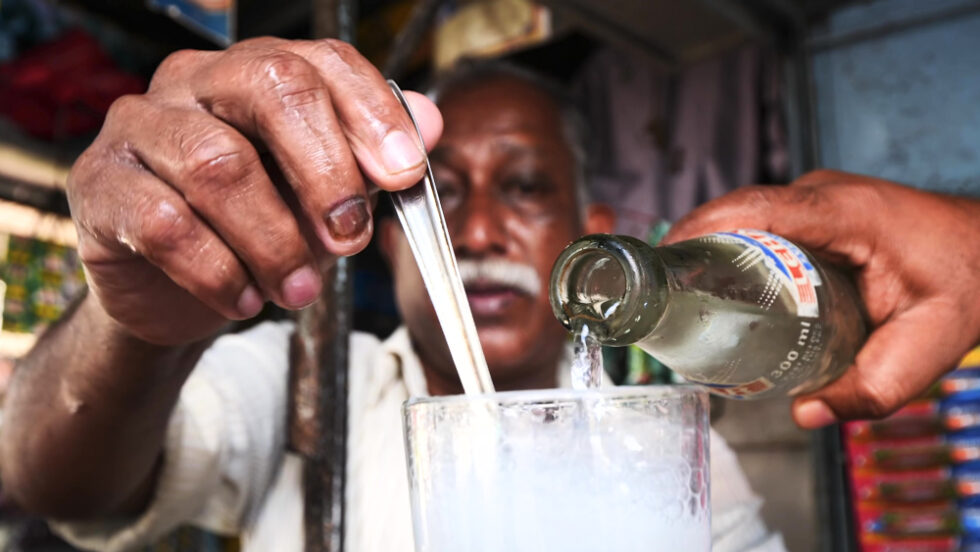 From there, we went to Rahmath Restaurant, where they have a lot of Kozhikode snacks. It’s a three-level restaurant. We ate on the second level and had unnakaya, which is a boiled, mashed plantain that’s then stuffed with coconut and sugar and fried. It’s super sweet and delicious, with a lots of amazing coconut. 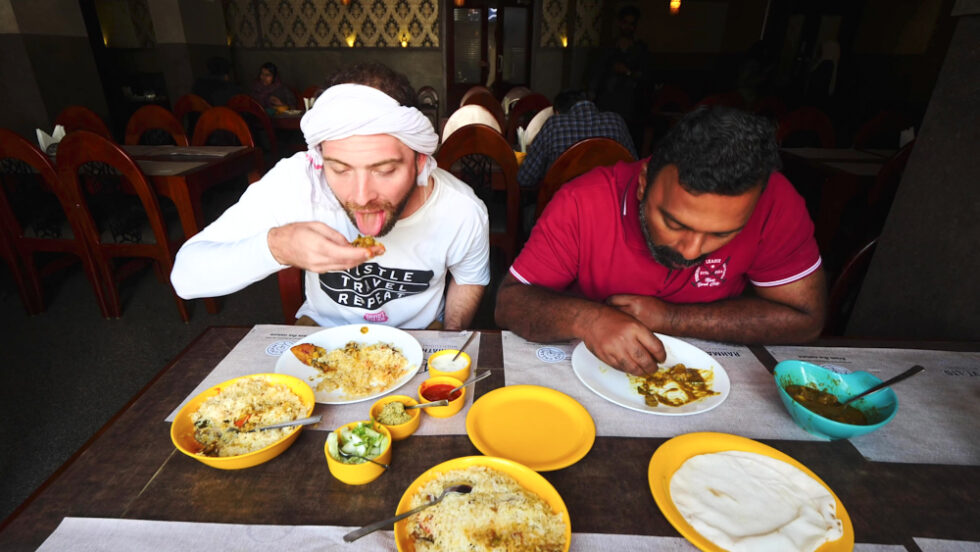 Then, I got some neypathal with mutton chaps. The mutton was super buttery and extremely tasty. Then, I rolled it up like a burrito! I loved the light curry. The neypathal felt like a softer version of appam. It was also a little spicy from the pepper in it. It left a tingling sensation on my tongue!

Then, we dove into the mussel biryani. It was the fishiest biryani I’d had but was so tasty. It wasn’t super salty like the mackerel biryani I’d had a few days earlier but it had a much more fishy taste. I tried it with the pickles first, which I didn’t love, so I went with the coconut-mint chutney next. I mixed it well and tried it—it was a great combination! It wasn’t spicy at all and adds a tropical feel to the mussel biryani. Our total came to 745 rupees/$9.80 USD. The mussel biryani by itself was 250 rupees/$3.29 USD. 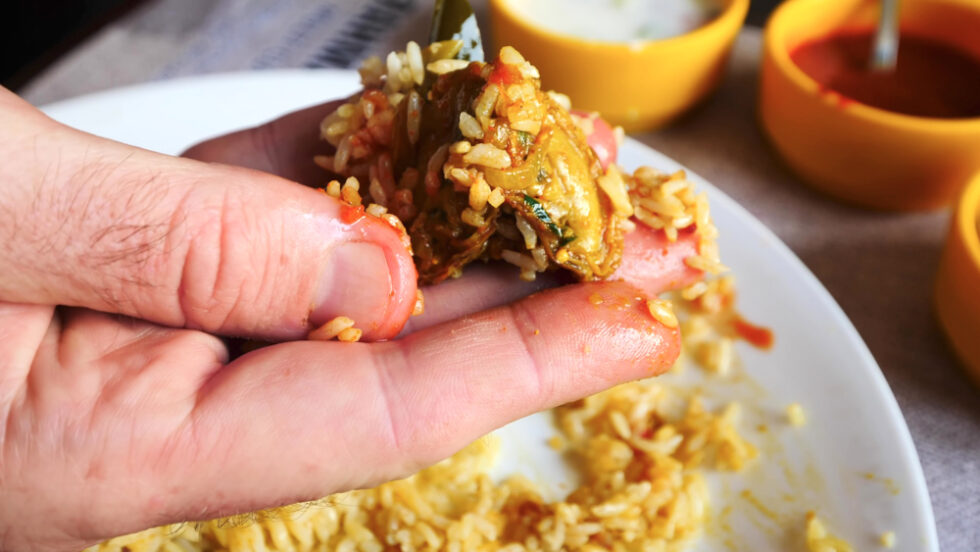 What an amazing northern Kerala food tour and road trip from Kannur to Kozhikode! It wouldn’t have been possible without my boy Ebbin, so be sure to check him out on YouTube and Instagram! You can also follow my travel/food adventures around the world on my YouTube channel!