My 13th day in Albania began bright and early with a new adventure: exploring the Albanian Riviera! Join me as I go on an epic Albanian Riviera road trip from Sarandë to Vlorë and enjoy lots of Albanian food, beaches, and attractions in southern Albania!

My buddy Erjan from Travel Media EU and I began our day in Sarandë, a seaside paradise along the Albanian Riviera and the southernmost city in the country. Before we’d start the journey to Vlorë, we hit up the best byrek shop in Sarandë, Byrektore Turi! 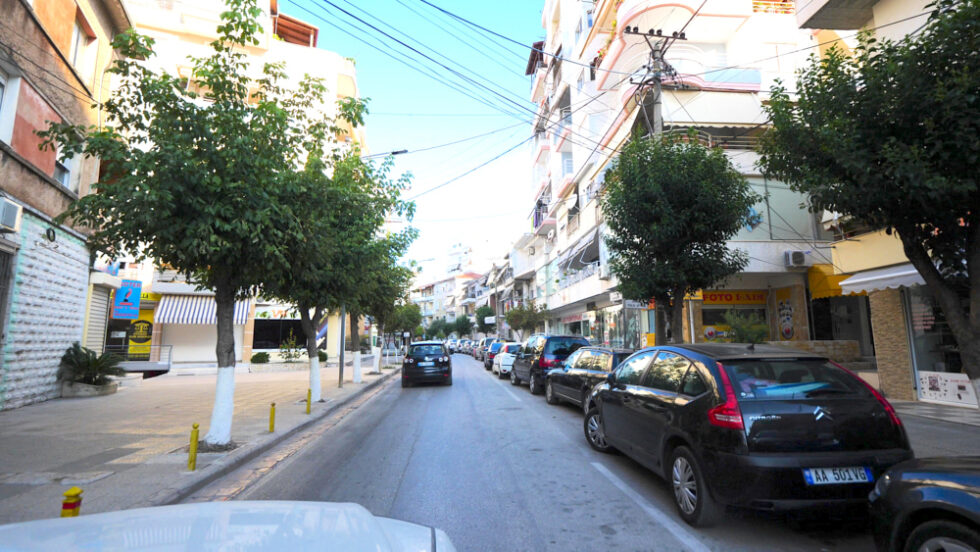 I ordered a cheese byrek. They’re common and cheap, but they’re also so good! I also had some dhalle, which is a watery yogurt drink. I only had one byrek because I wanted to keep it light, but they also have an onion byrek and a cabbage one. My favorite is the cheese! 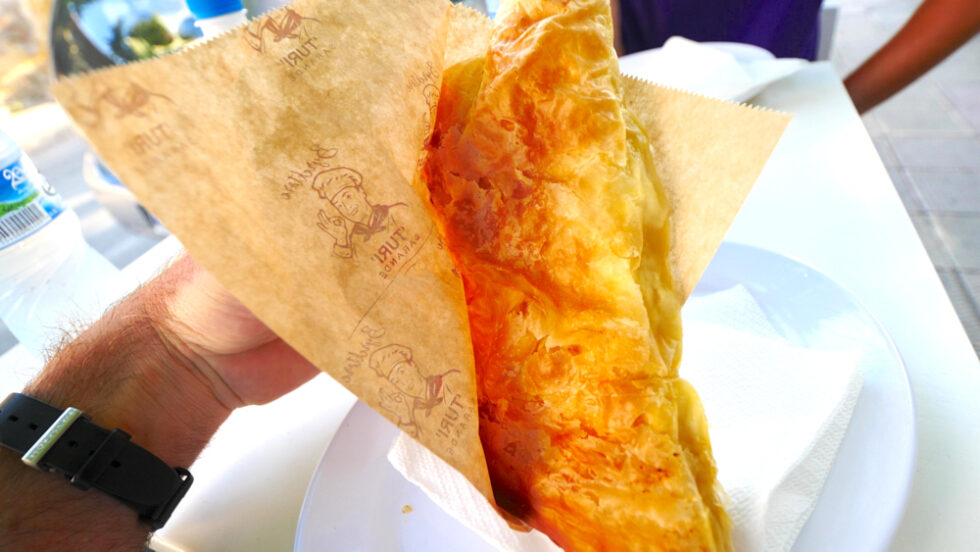 Erjan and I had spent 36 hours in Sarandë, but we had yet to explore the Old Town. After we left the byrek shop, we passed by the ruins of the 5th-century Synagogue Complex. Only parts of the walls are left. Further on is a stairway that leads down to a pedestrian walkway that’s lined with bars, restaurants, and apartments. It leads to the sea! 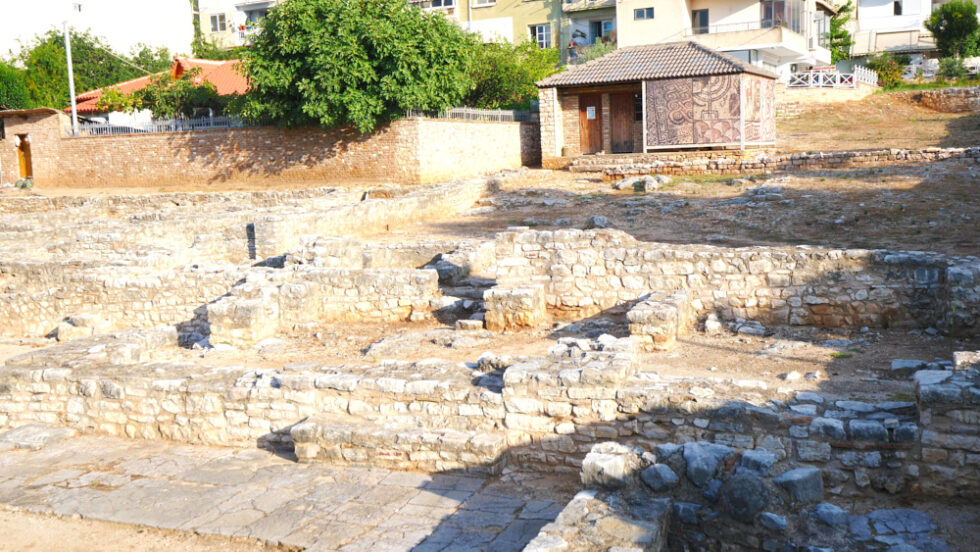 At the sea is a miniature port with touristic boats and fishermen’s boats. From 6-9 a.m., the fishermen arrive with their fish and sell them for good prices. I could see crabs, mussels, and tons of fish!

Further on was Sarandë Beach, one of the few public beaches in the city. Most of the beaches are private, so you have to pay. But this one is free. And it’s beautiful! It’s lined with apartments ad a boardwalk and is very family-friendly. On the beach, you can see the ruins of the old city walls! 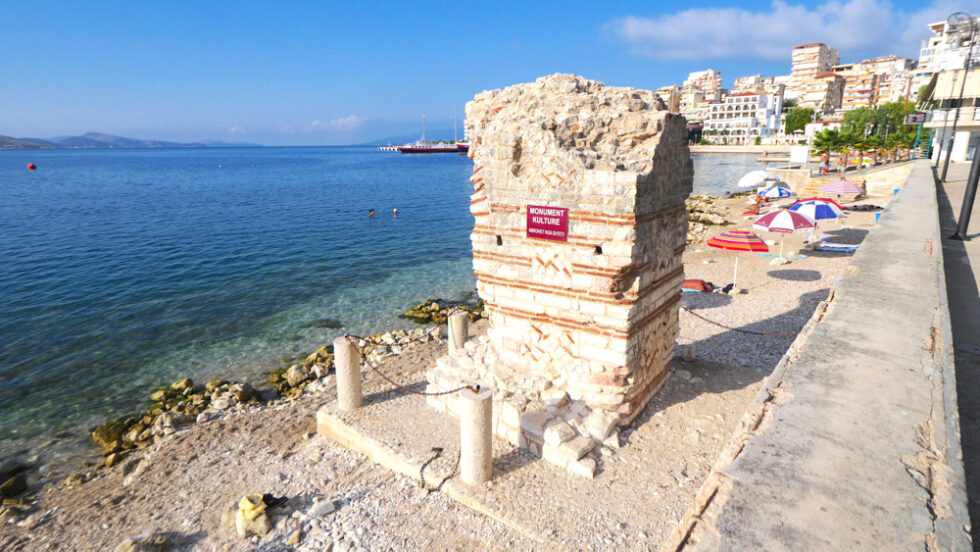 Next, we arrived at Jamaica Beach Club, an open-air cocktail bar on the beach. There, we enjoyed some strong coffee and began the long route to Vlorë! I couldn’t wait to explore the Albanian Riviera and see the beaches and attractions in this part of Albania. 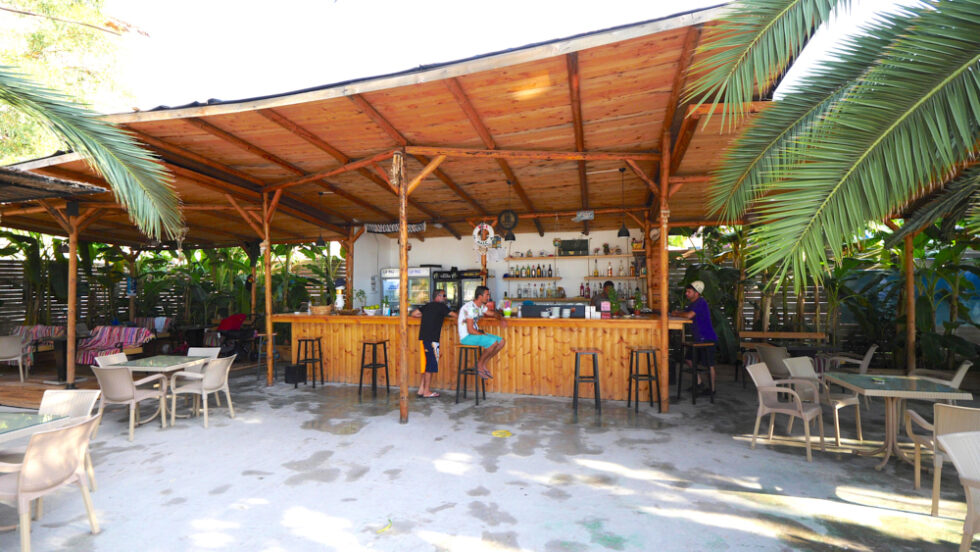 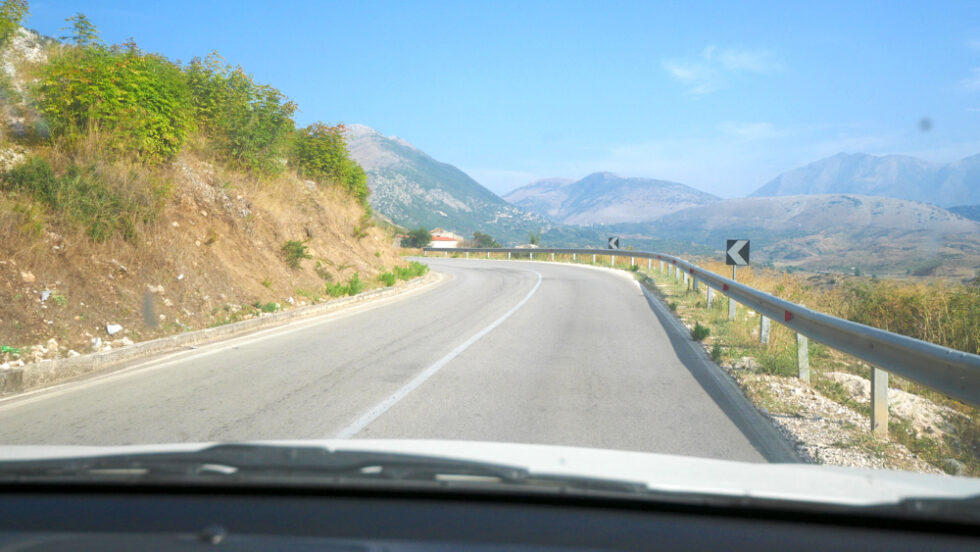 We arrived in the village of Borsh, which is an hour’s drive north of Sarandë and famous for its beach and olive oil. The largest bay in the Albanian Riviera is there. In the center of town is Ujvara Veranda, an amazing café that’s built on top of and around Borshit Waterfalls! It’s so nice!

We toasted with some plum rakija. The sound of the rushing water and the breeze were so nice. Every day in Albania is an amazing adventure. The waterfalls are in the very center, and it’s surrounded by terraces and chairs. The rakija only costs 100 lekes/$0.95 USD each. 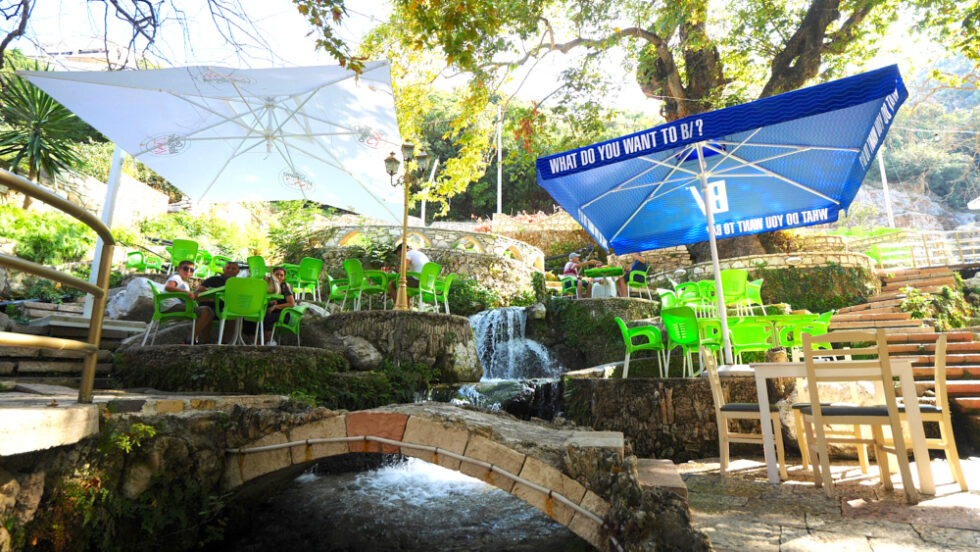 We continued down the seaside highway along a gorgeous bay with crystal clear water. There was a beach and lots of yachts. From Borshit Waterfalls, it took 20 minutes for us to arrive at Porto Palermo Castle, which is located near Porto Palermo Bay. Its origins are disputed; some say it was built by Ali Pasha of Tepelena in the 19th century, while others say it was built by the Venetians due to its Venetian-like architecture. 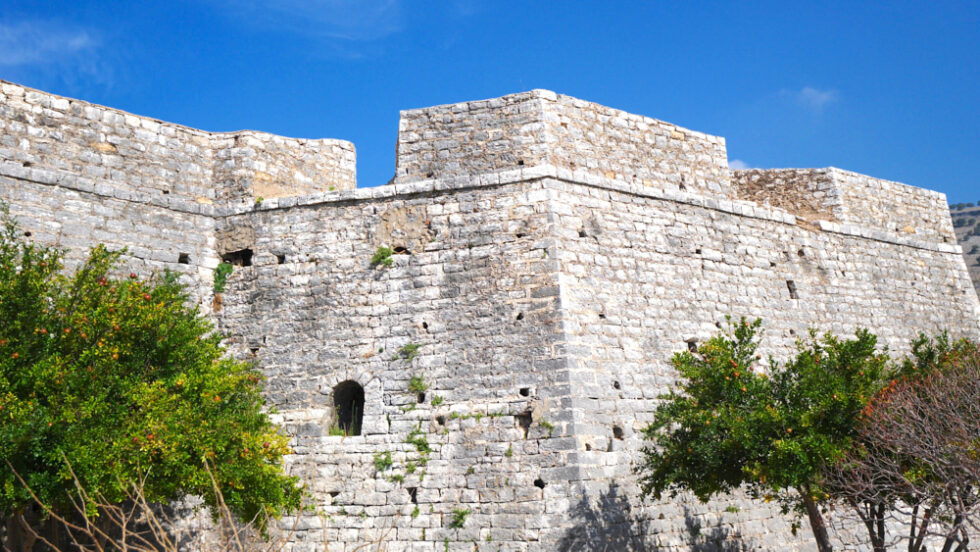 There’s a rocky, craggy path that leads up to the castle. It’s a triangle castle and was used by Ali Pasha of Tepelena, his wife, and his soldiers. It was built for fun and was converted into a storage space for oil in Communist times. 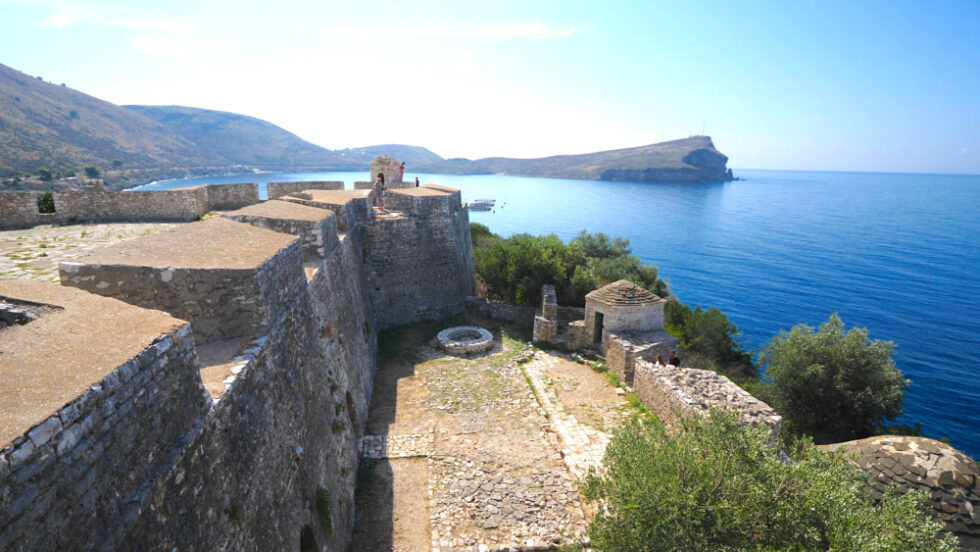 Porto Palermo Castle was very different from other fortresses I’d visited. It was also a home. There were about 9 rooms and a balcony with an amazing view of the sea. The terrace was built for Ali Pasha’s wife! The soldier room has a stairway leading straight up to a wide-open terrace with a panoramic view of the Ionian Sea. It’s the best of both worlds: history and a beautiful bay and beach below! It’s gorgeous!

Next, we drove ten minutes to Himarë, which is like a smaller version of Sarandë. It’s known for its beaches and nightlife! The beach is gorgeous, but we didn’t have time to get in the water. We stopped at Dhima Hotel. I had some raki while Erjan had a beer! I quickly visited the white-sand beach, which had lots of umbrellas. It was gorgeous! 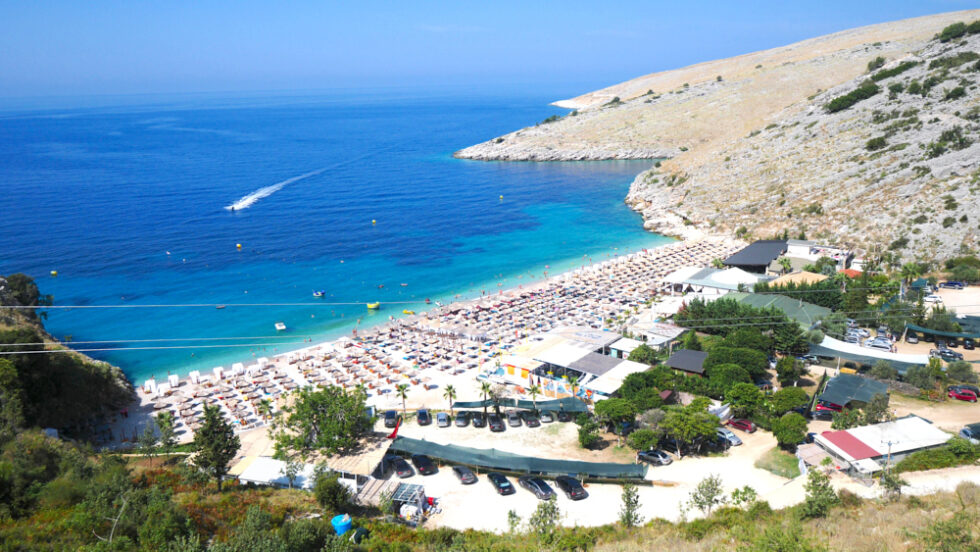 I bought a fig from a vendor there and met a couple with a young kid who follow me! They said it’s a great family beach! From the southern part of Himarë, we drove through the older town. Next, we passed through Vuno, where there were cobblestone streets. It was really bright and colorful with white buildings with orange roofs. 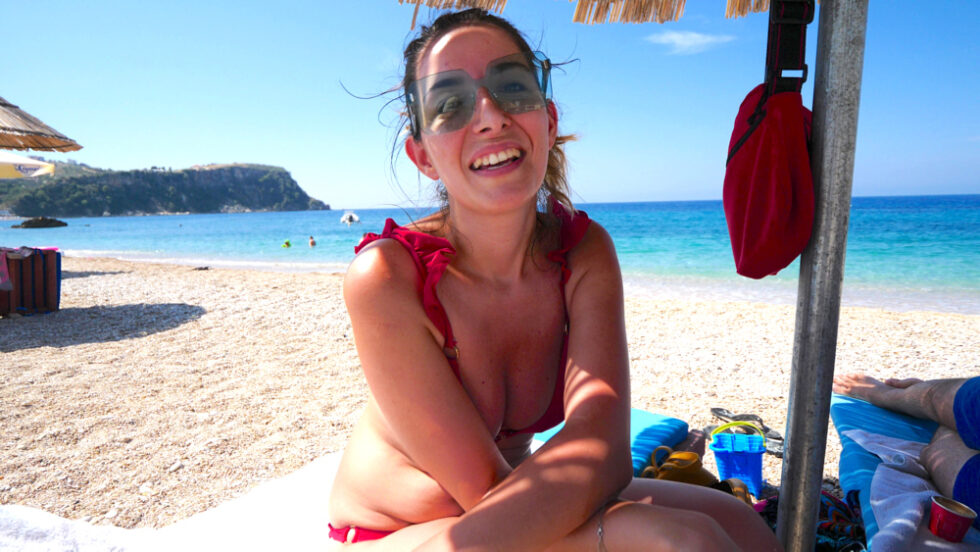 Our next town was Dhërmi, which has a great beach that’s popular with the young crowd. There are also lots of traditional houses! The beach was 3 kilometers long and lined by a boardwalk. There were never-ending umbrellas as well as bars and restaurants. It’s amazing! 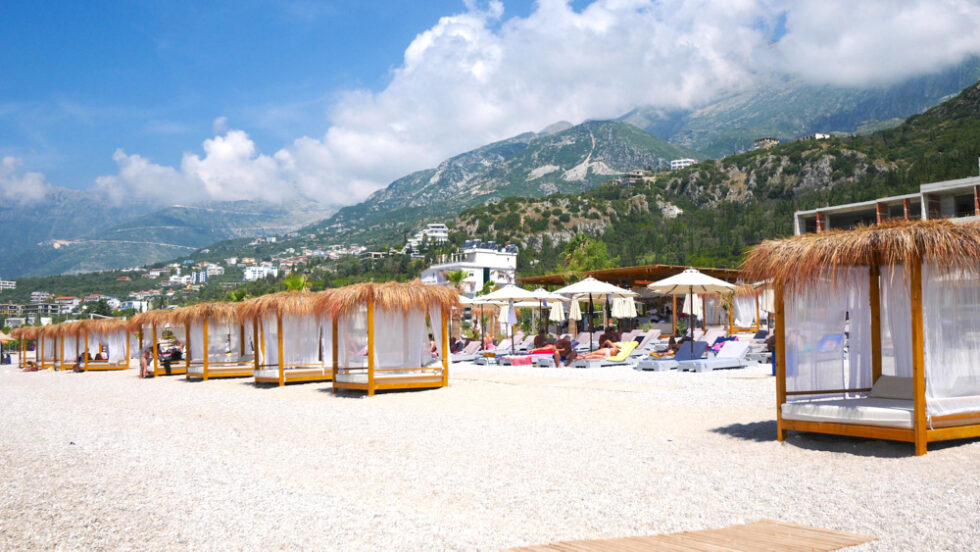 Our next stop was Palasë, another beach town that’s next to the sea but a bit further inland. You go through the mountains to get there! There are lots of mountains and cliffs all around. The area was less developed and wilder, but still had resorts and bars near the beach. This beach was rockier and a lot less crowded. I bought a fig from a vendor and saw some paragliders there! 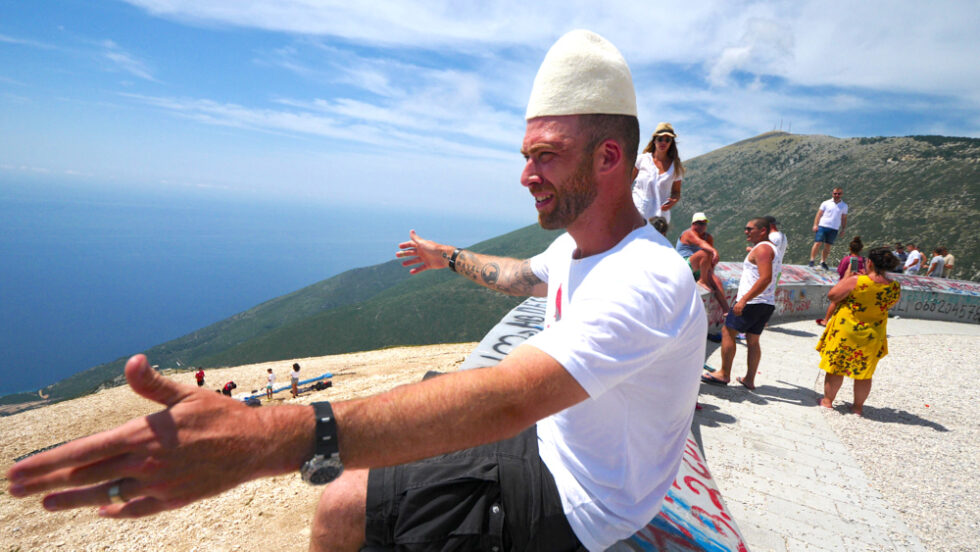 The Albanian Riviera reminded me a bit of the Italian Riviera, but it was also quite different. Then, we headed up a mountain, where we had an incredible view of the Ionian Sea at Panorama Llogara. Lots of paragliders fly there. It’s an amazing viewpoint!

Next, we headed further into the mountains and then back down on our way to Llogara National Park. It’s a forested area with lots of trees. At Llogara Tourist Village are cottages and a park where there are 9 deer in the park. You can buy corn to feed them! Llogara Tourist Village is a hotel and restaurant. In the middle is a mini-park. There’s also a restaurant where you can try amazing mountain food like lamb and vegetables! 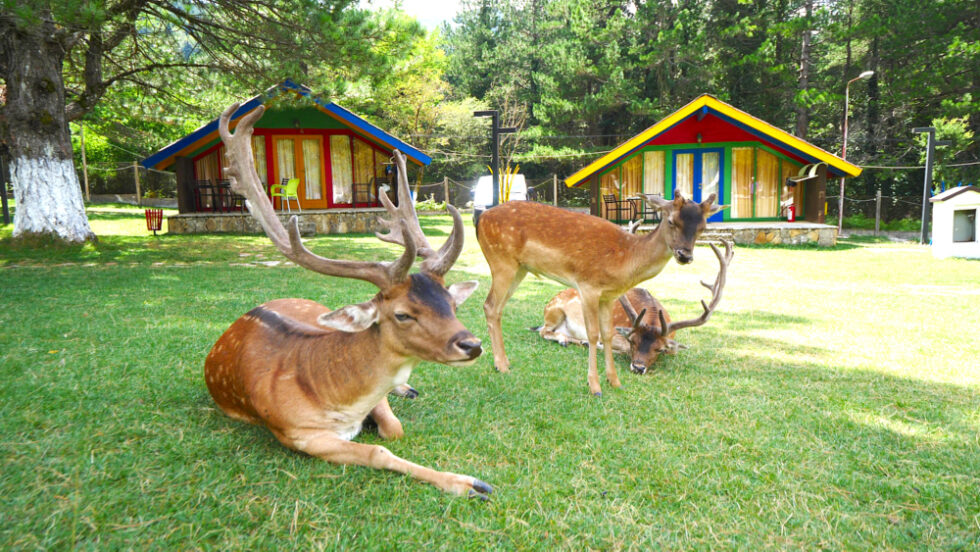 I sampled four rakis: plum, wild berry, blueberry, and juniper. The plum was strong, and the wild berry was unique and reminded me of raspberry. I could taste the blueberries in the third one, and the juniper was like a gin rakija! 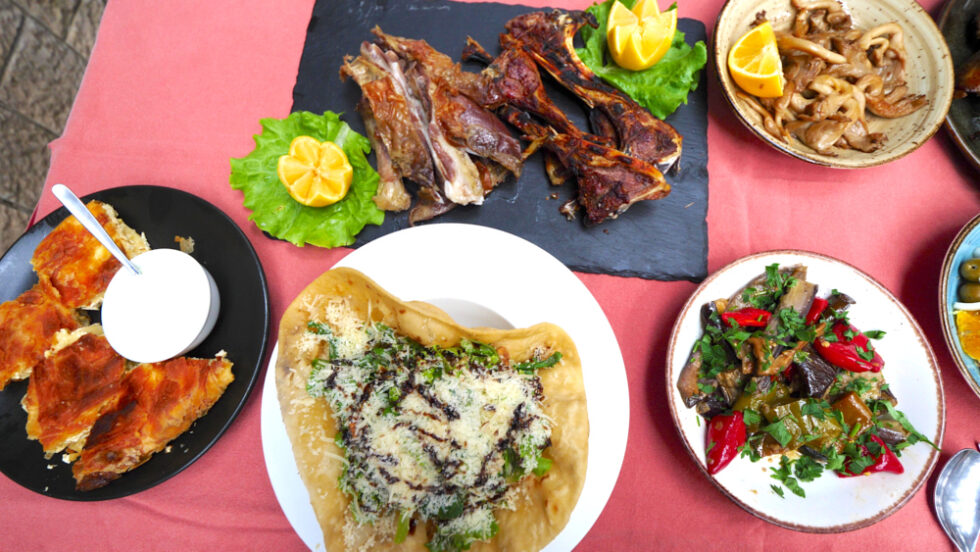 For lunch, we had a roasted lamb with lamb intestines, cheese grilled in a tava, and much more! The cheese had a crispy exterior and a soft, buttery interior, and came with tomatoes and green peppers. I loved it! 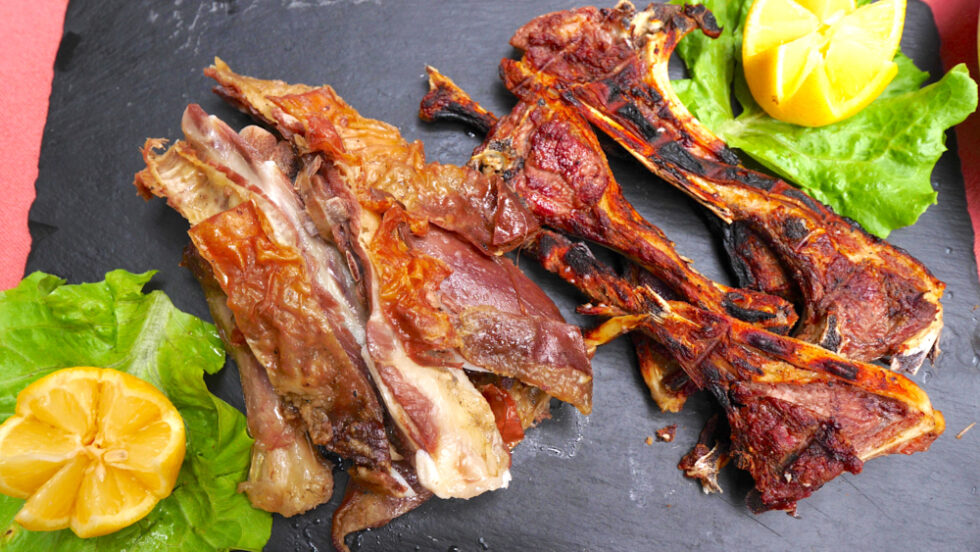 Next were the lamb ribs, which were tender and fatty with a smoky charcoal taste. Next was a creamy red pepper paste with toasted bread. It had a bit of heat and was one of the best pastes we’d tried. Next were grilled vegetables including eggplant, red pepper, and green pepper, which were super moist and tasty! 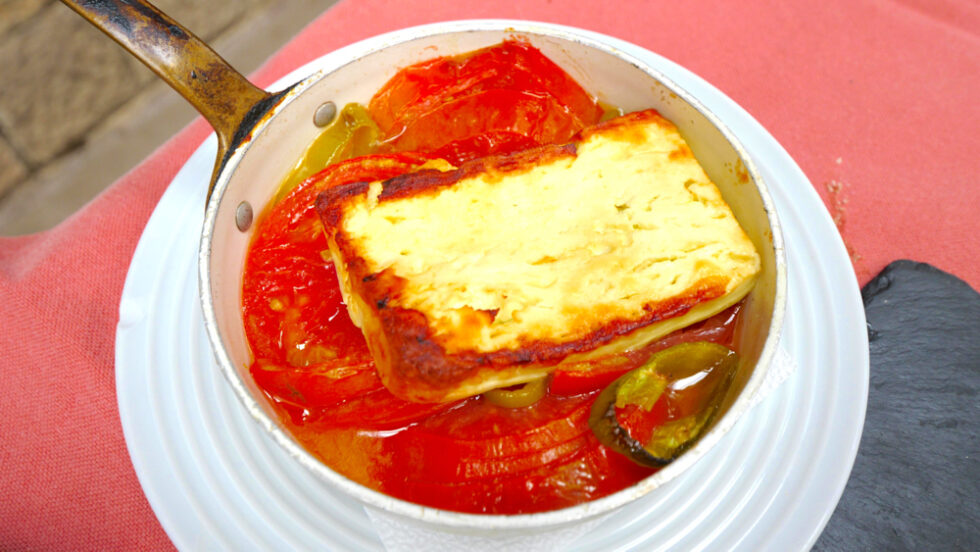 The roasted lamb ribs were unreal. I couldn’t get enough of it! It was so meaty and full of delicious, fatty flavor. Next were quail legs and wings, which were also sweet and meaty. There was also a super sweet rice and some earthy wild mushrooms. A highlight was their special cheese byrek, which was doughy and packed with cheese and full of layers. It’s amazing with fresh yogurt! The byrek was super fresh!

Then, I jumped on the olive, orange, and onion salad, which was really unique, and a Caesar salad in a tosta. It was creamy and contained chicken, nuts, cheese, and balsamic vinegar. Our last dish was yogurt with honey and walnuts, which was unbelievably fresh. I loved the combination of textures and the sweetness of the honey. The crunch of the walnuts was fantastic! There’s nothing like fresh yogurt! 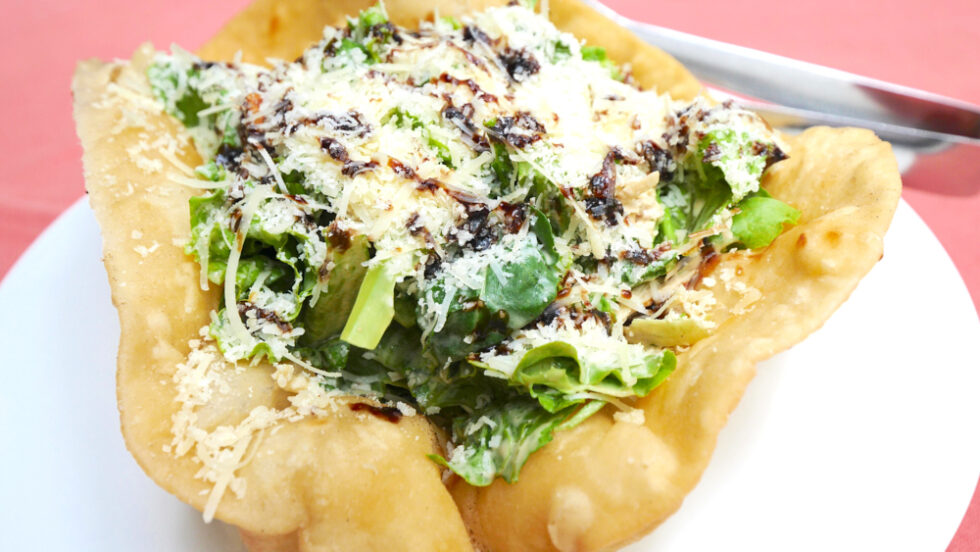 What an incredible Albanian Riviera road trip to see the beaches and attractions of southern Albania! I cannot recommend this road trip enough. Obviously, I did it within a matter of hours, but I suggest taking it slow, over at least five days so you can properly experience each location between Sarandë and Vlorë. It’s a great trip to do solo, but it’s also fantastic for couples or families, or if you’re traveling with friends! 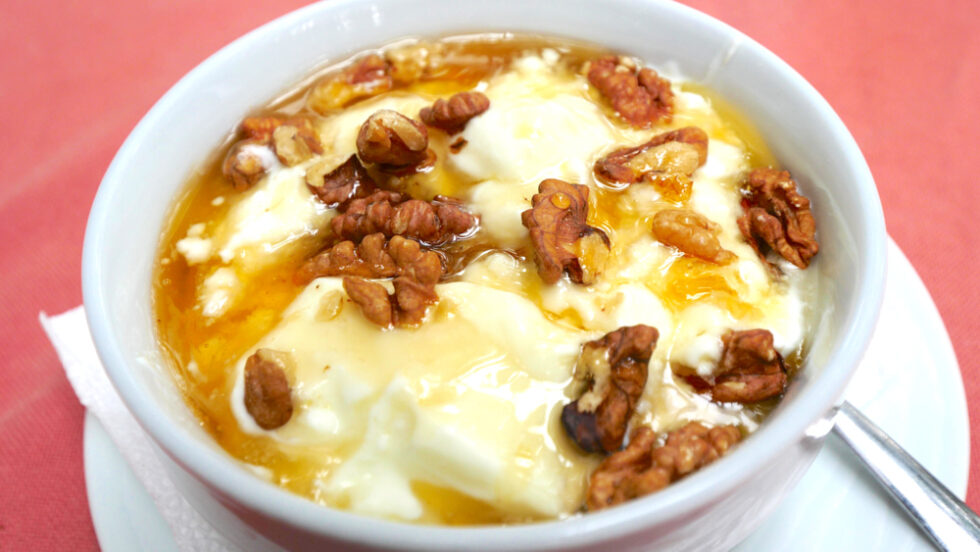 I have to give a huge shoutout to Travel Media EU, Balkan Pearls Tour Operator, and Rental Car Albania for making this one of the most incredible parts of my trip through Albania! Be sure to book with them when you visit the Albanian Riviera to check out the beaches of southern Albania. They’ll take good care of you and help you make memories you’ll never forget! 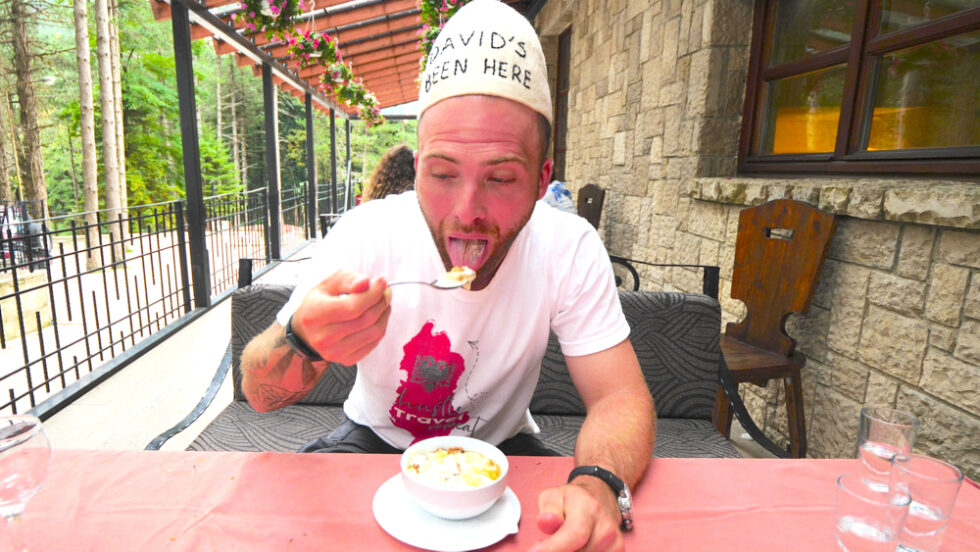 I hope you liked coming with me to explore the Albanian Riviera beaches and attractions in southern Albania! If you did, please give this video a thumbs up and leave a comment below. Also, please subscribe to my YouTube channel and click the notification bell so you don’t miss any of my travel/food adventures around the world!