My whirlwind adventures in Pakistan continued with an incredible Pakistani street food breakfast in Karachi, Pakistan! Come along with me as I try Pakistani favorites like nihari, halwa puri, parathas, and much more!

My guide Furqan from Manaky and I started our morning at Javed Nihari with the three foods you have to try when you come to Karachi! There, they were making a delicious-looking stew called nihari, which contains beef, bone marrow, and brains! 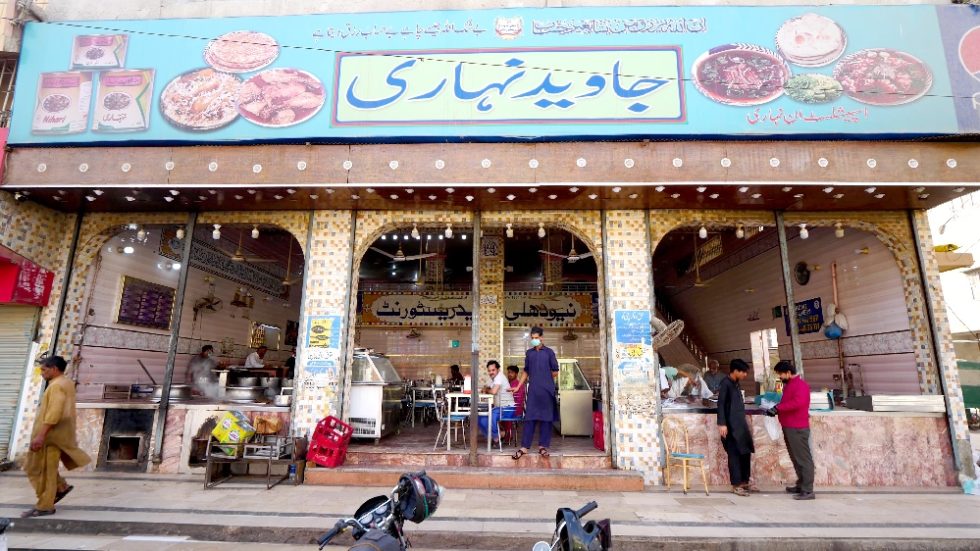 They were also baking naan in a tandoor. You tear off a bit of the naan and grab some of the meat with it. The beef was so tender, it fell apart in my mouth. 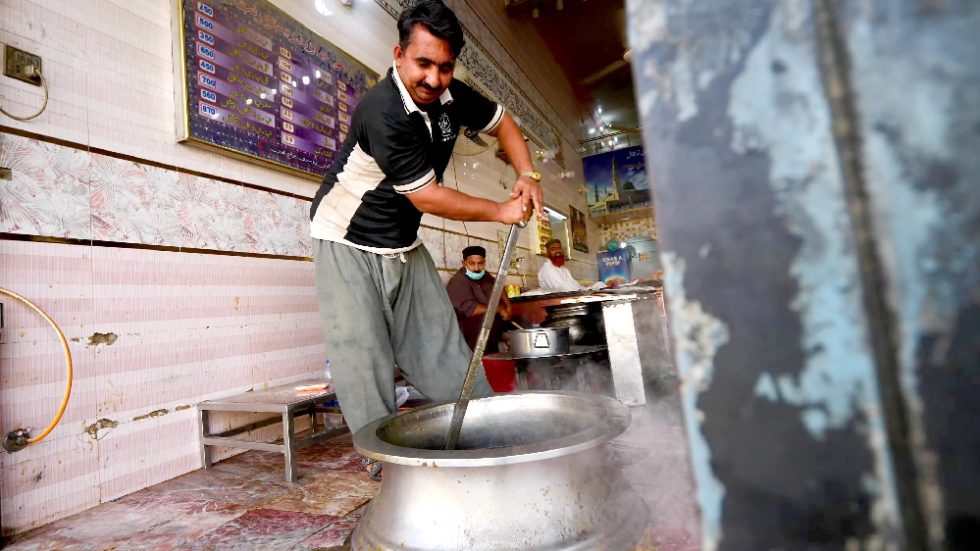 There was tons of flavor, and I loved the oil. The oil was very gelatinous and satisfying, too! Eating it with the naan was perfect! 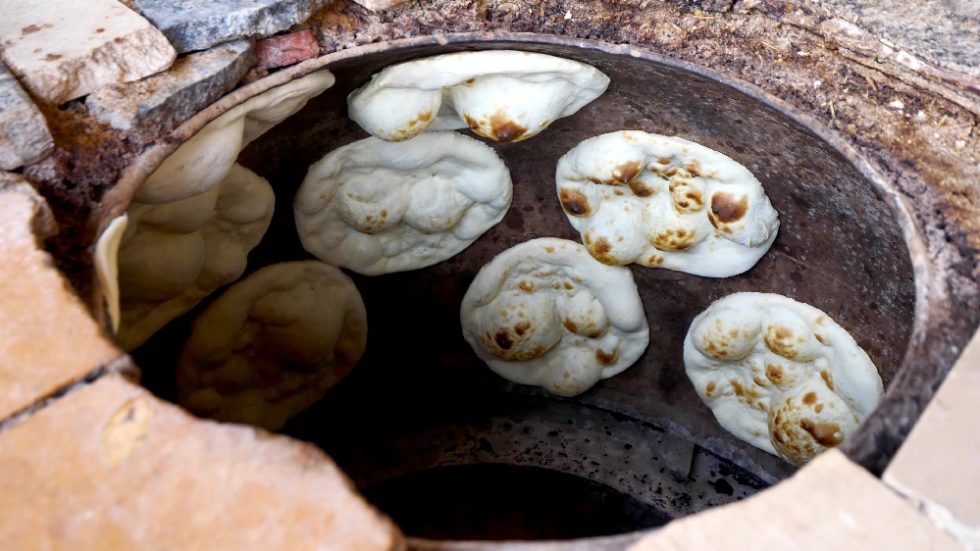 Adding garlic and green chilies on top added a whole new dimension of flavor and heat. It was so rich in flavor and color. The heartiness and spiciness of the dish were phenomenal. I honestly couldn’t get enough of it! 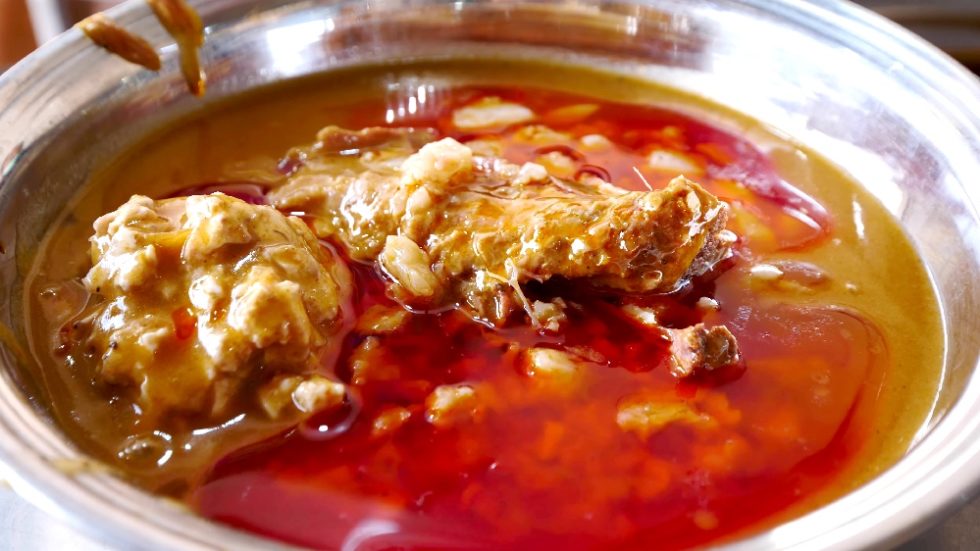 This was my first time having nihari, but I loved it! The bone marrow was super buttery and pleasing. It truly was a phenomenal, meaty, and delectable stew! 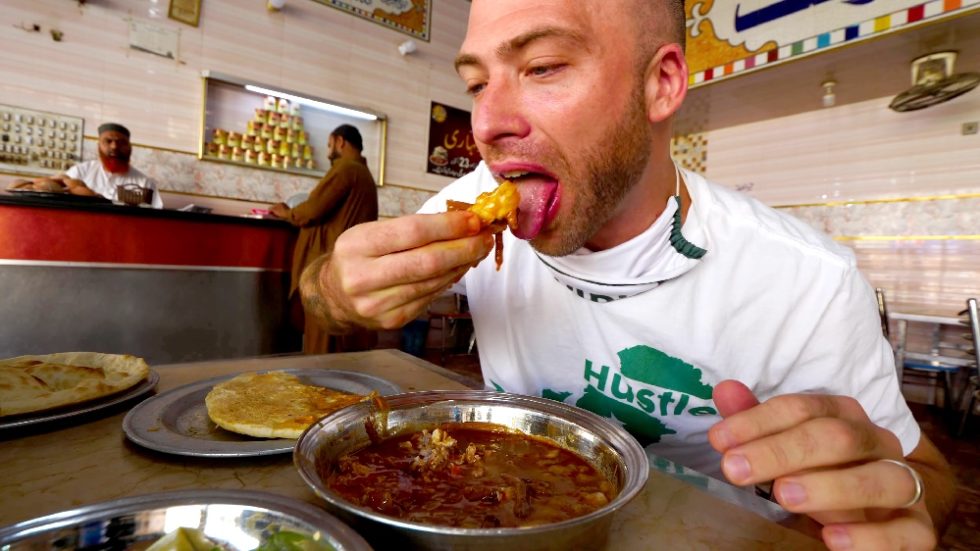 It was so tasty, it had my mouth watering. This is essentially Pakistani comfort food, and I could see why. It was my favorite breakfast item of my trip so far! 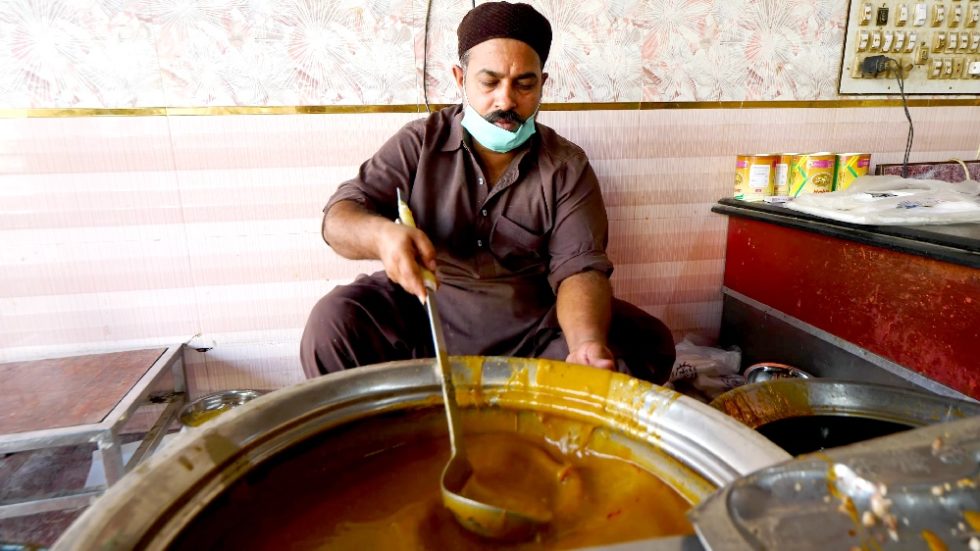 One thing I had also noticed is that the people in this country are remarkably kind. The guys there comped our breakfast! 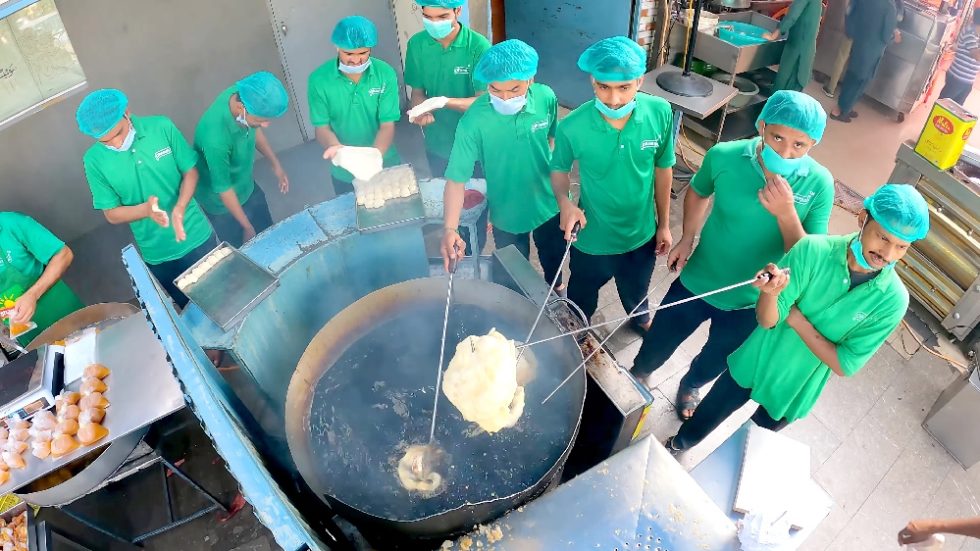 Next, Furqan and I hopped in the car and headed over to Dilpasand for some halwa puri. There, we saw roughly a dozen guys flattening puris and tossing them into a massive vat of hot oil!

Watching them cook the puris was such a cool spectacle. They only take 10-15 seconds to fry up! 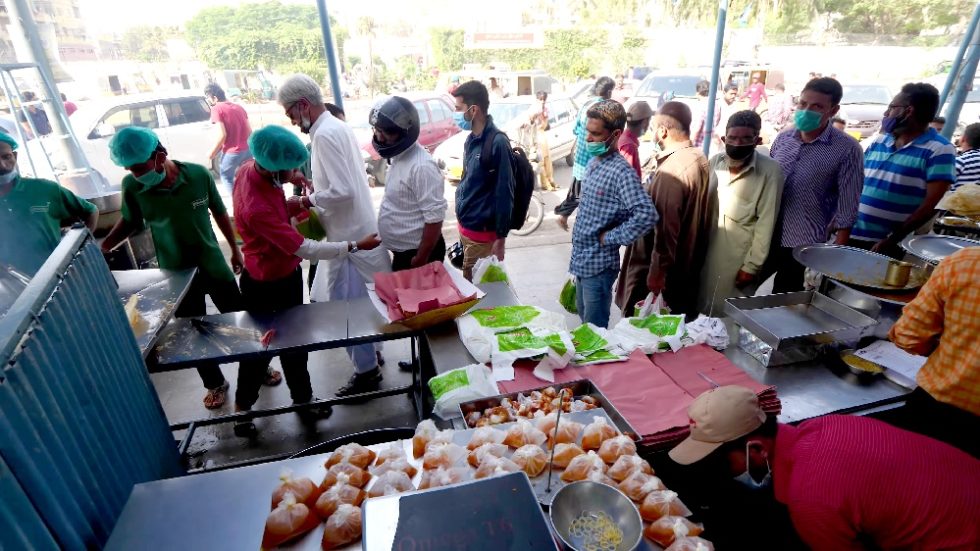 The halwa puri comes with achar, aloo, channa. I could tell that this place was amazing, because there were tons of locals waiting in line to eat there! 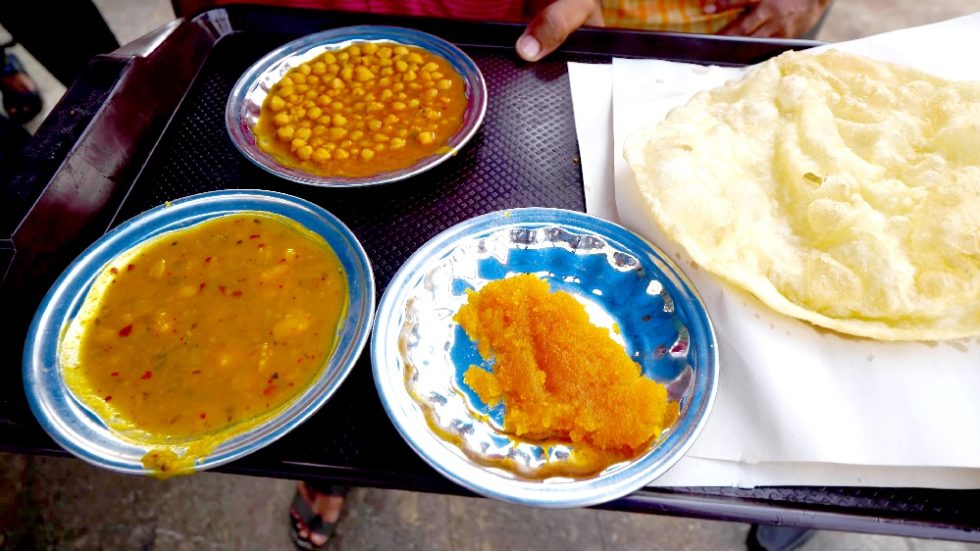 The puris here are large but not crispy. They’re flaky and soft! They were great with the halwa, which was nice and sweet. The channa and pickles were sweet and sour at the same time. 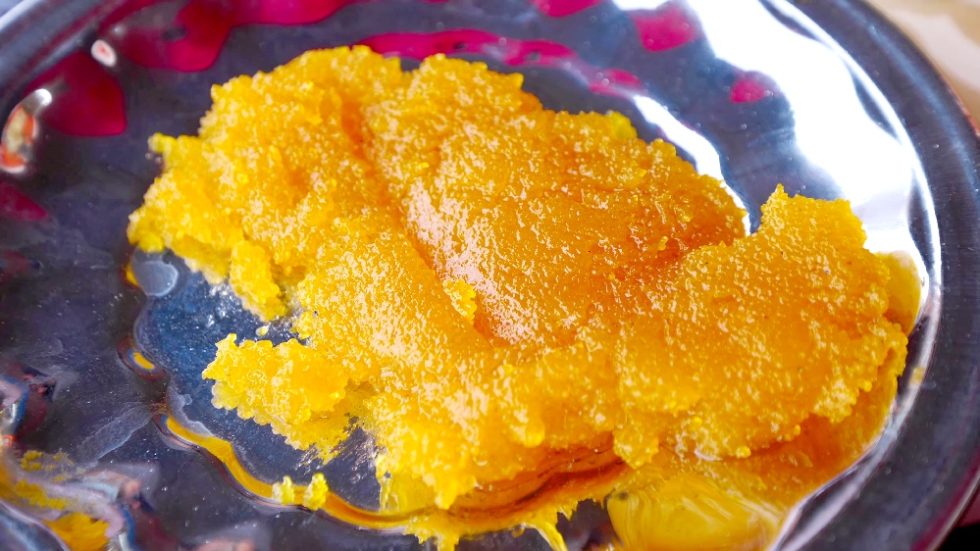 The aloo was great as well, but my favorite was the halwa, which is one of my favorite sweets on the planet! 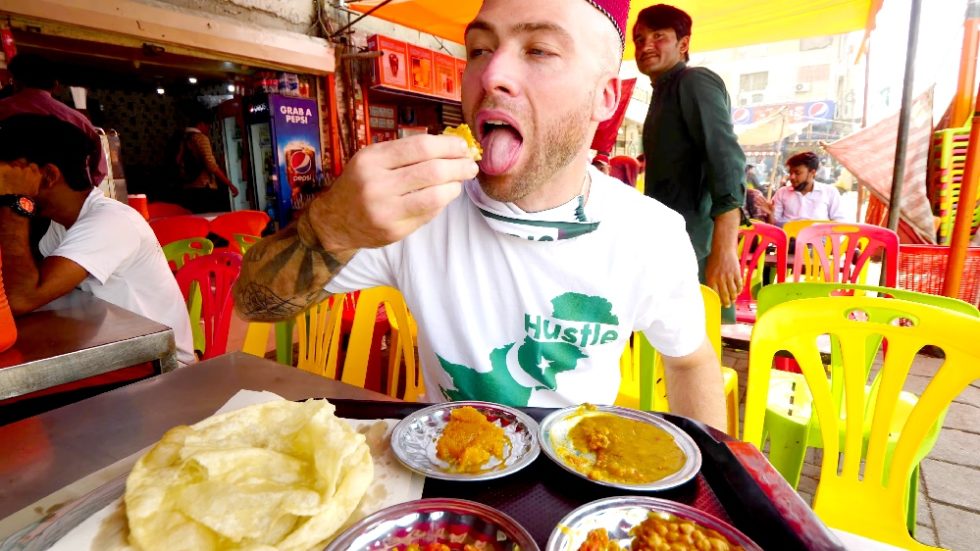 Next door, at Dhamthal, they were making Anda parathas with fried eggs. I got some boiling hot chai first, and then dove into the paratha and egg. This paratha was crispy and hot, and delicious with the egg yolk, salt, and pepper. 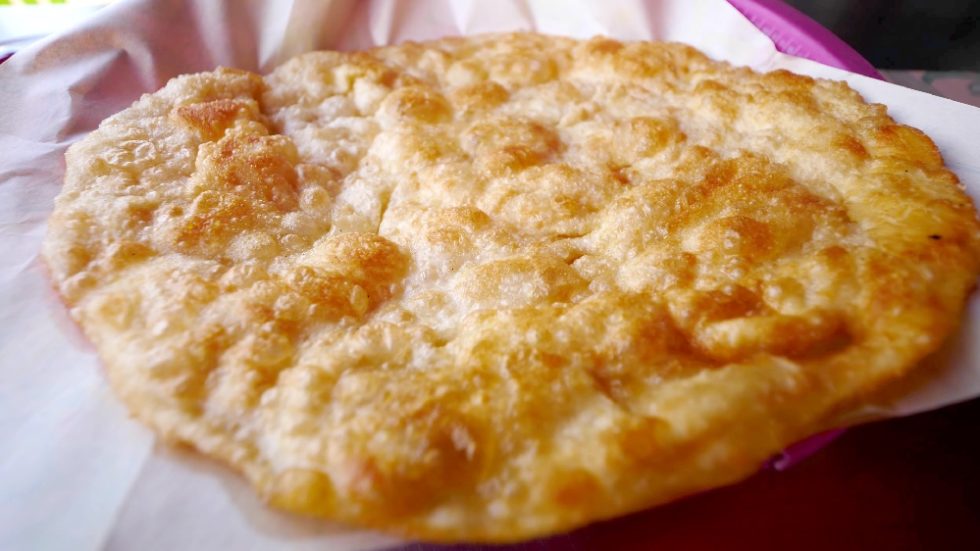 The chai was also delicious! I had to let it sit for about 20 minutes to cool off, but it was fantastic. It was milky, creamy, and full of delicious warming spices.

Then Furqan poured some of his chai onto a plate to let it cool off faster. The temperature dropped 20 degrees almost instantly! 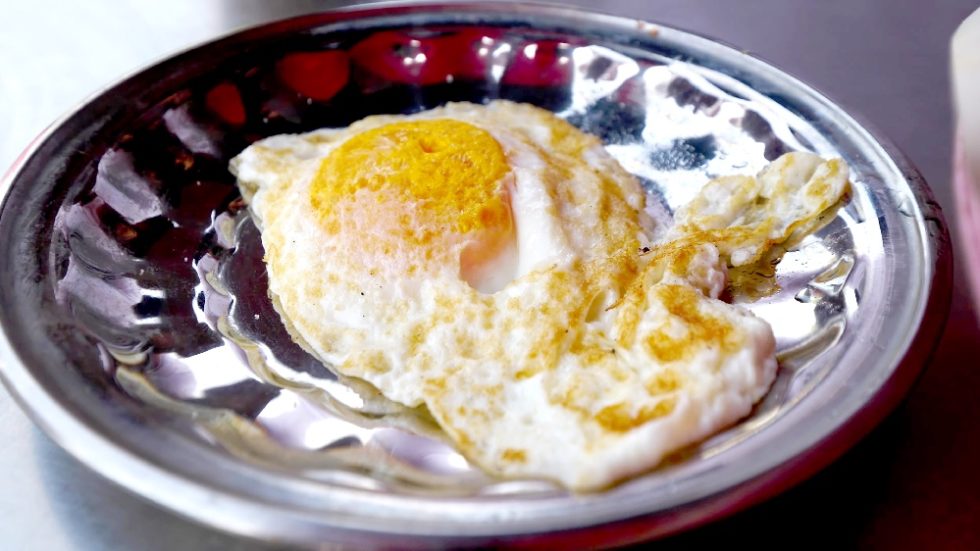 What a fantastic way to end my Pakistani street food breakfast tour of Karachi, Pakistan! Huge thanks to Furqan from Manaky for showing me around and taking me to eat so much delicious Pakistani food! 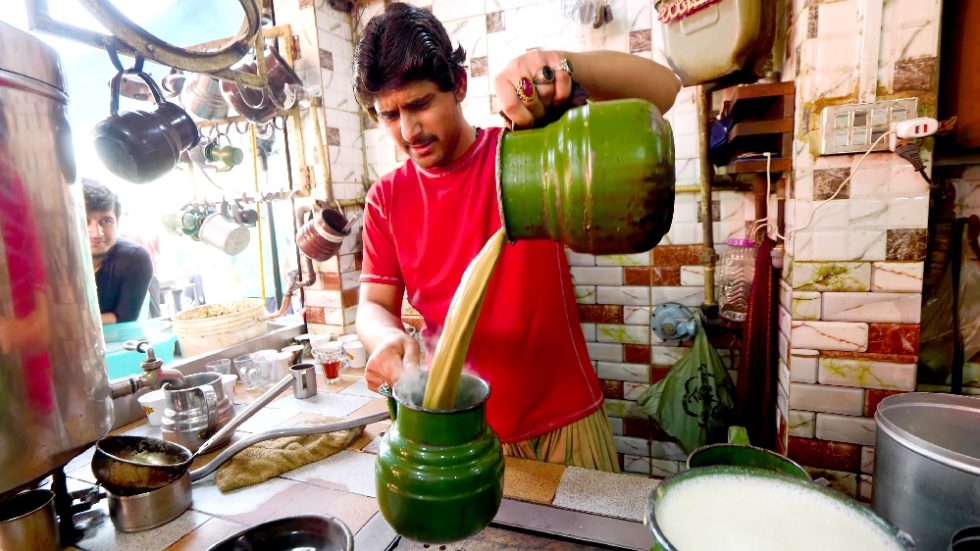 I hope you liked coming with me on my Pakistani street food breakfast tour in Karachi, Pakistan! If you did, please give this video a thumbs up and leave a comment below. Also, please subscribe to my YouTube channel and click the notification bell so you don’t miss any of my travel/food adventures around the world!