After exploring Karachi and Peshawar, I made it to my next destination in Pakistan, the city of Mardan! Come with me as I take you on a rare Mardan street food tour and explore an ancient Buddhist monastery in Mardan, Pakistan!

My guide Rashid from Manaky and I woke up bright and early to begin our drive to Mardan. Our first stop of the day was in Taru Jabba, a small town 30 minutes outside of Peshawar, for some breakfast! 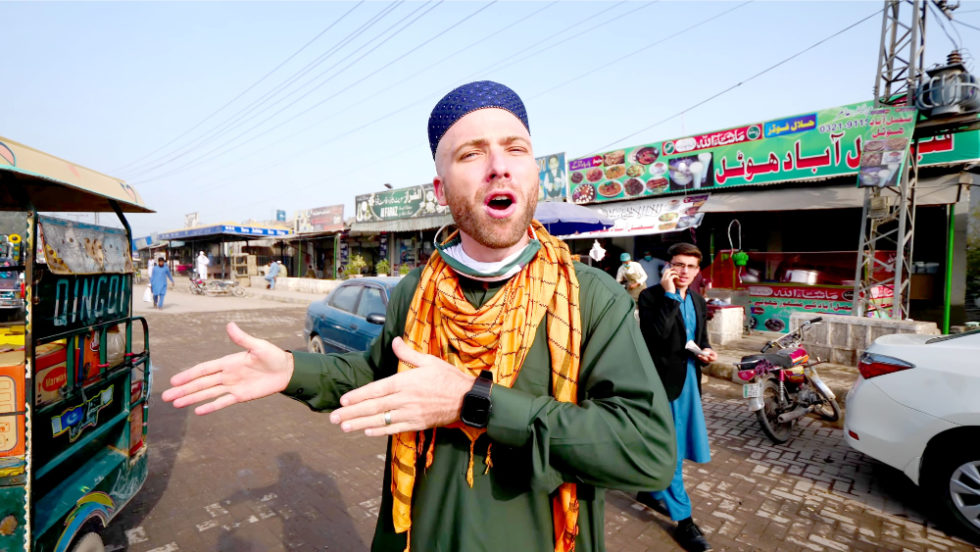 Taru Jabba is roughly halfway between Peshawar and Mardan. We began our Mardan street food tour in Pakistan at a group of street food vendors in front of the Faysalabad Hotel selling parathas, hard-boiled eggs, chana, Haleem, and lassi. This lassi is nowhere near as thick as Punjabi lassis and is topped with malai. 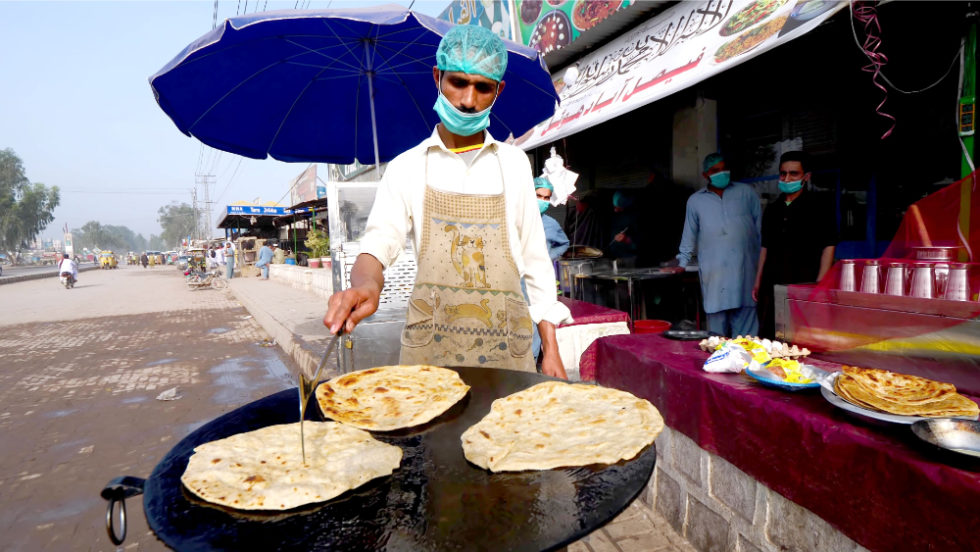 The haleem is a hearty lentil stew that contains either beef or chicken. I’d had some in Karachi and loved it! I also got some halwa! 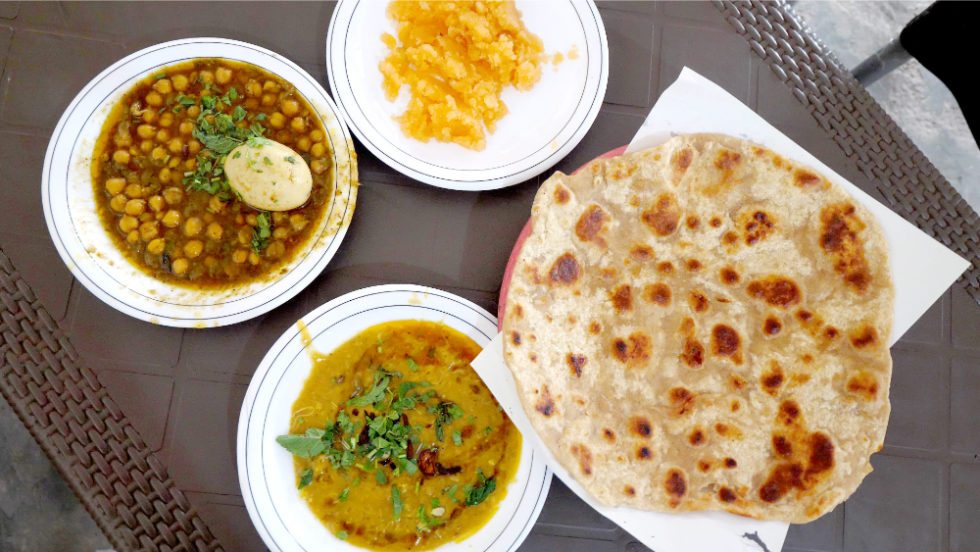 First, I took a piece of paratha and dove into the channa, which was nice and oily. It contained a ton of flavor and paired very nicely with the hard-boiled eggs.

It was such an incredible breakfast! You often find the best foods in small towns. The chana and eggs alone blew my mind! 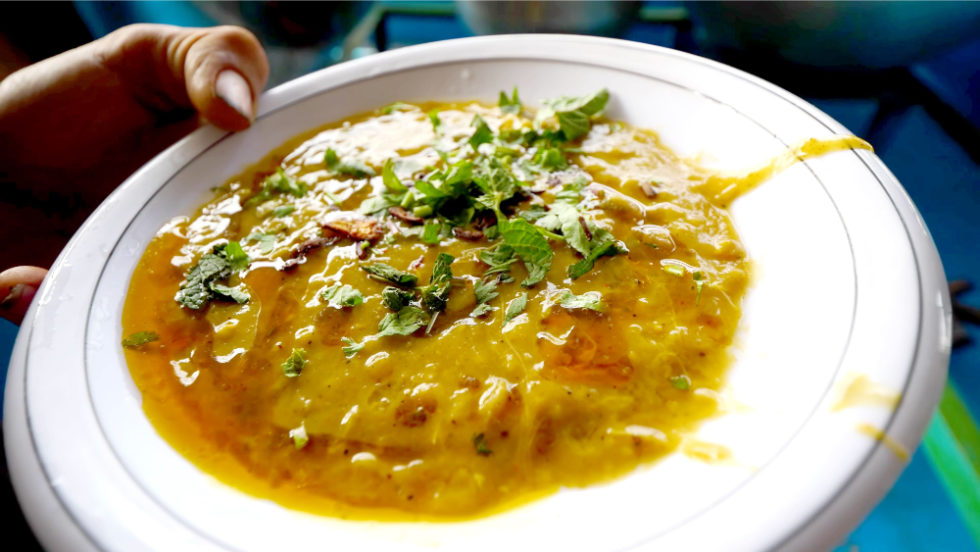 Then, I jumped on the Haleem, which was thick and pasty and had some mint and crispy onions in it! The mint gave it a nice herbal flavor, and the onions added some acidity and crunchiness. 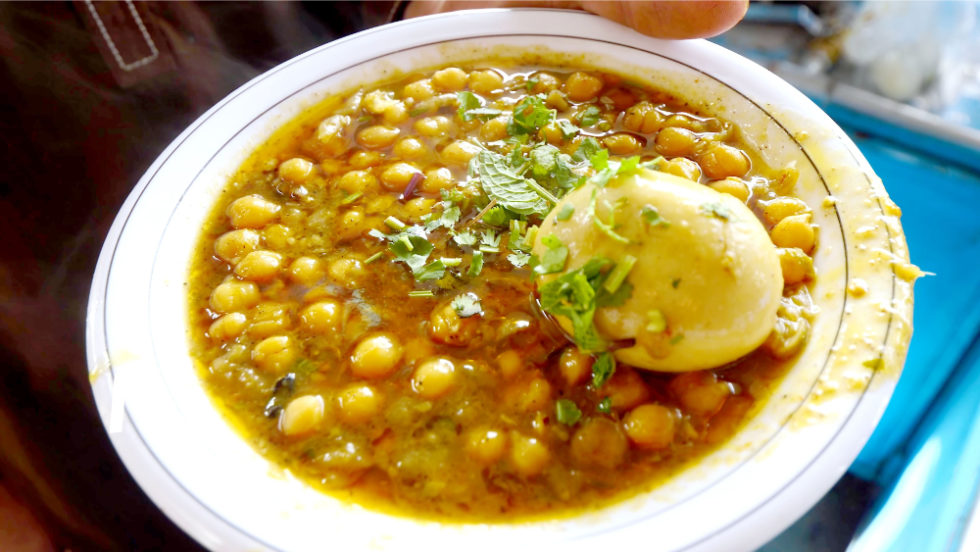 The halwa, meanwhile, was nice and sweet. Eating it together with the channa gave me both sweet and savory flavors. The combination was unreal! 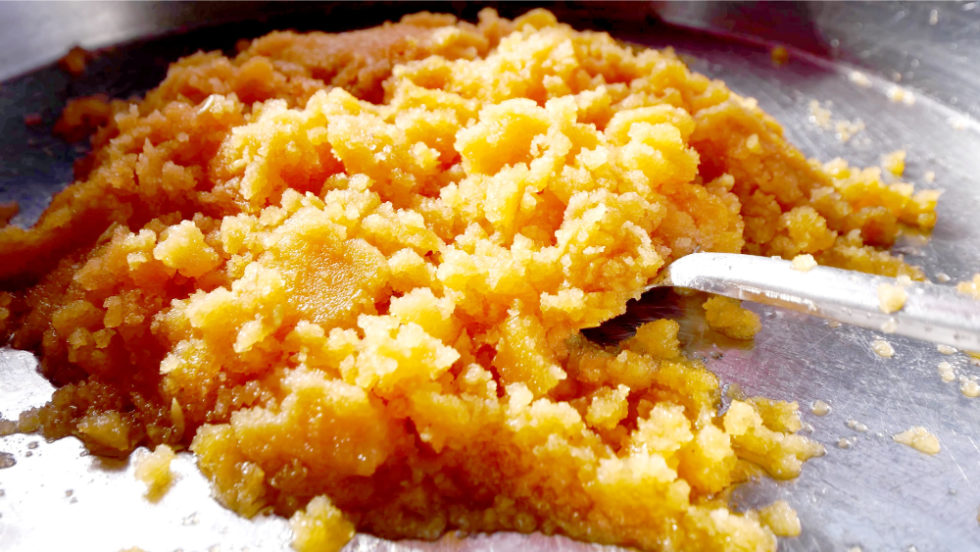 Then, I drank my lassi, which was nice and yogurty, and super refreshing. But then I dove back into the halwa and Haleem, which was another unbeatable combination! 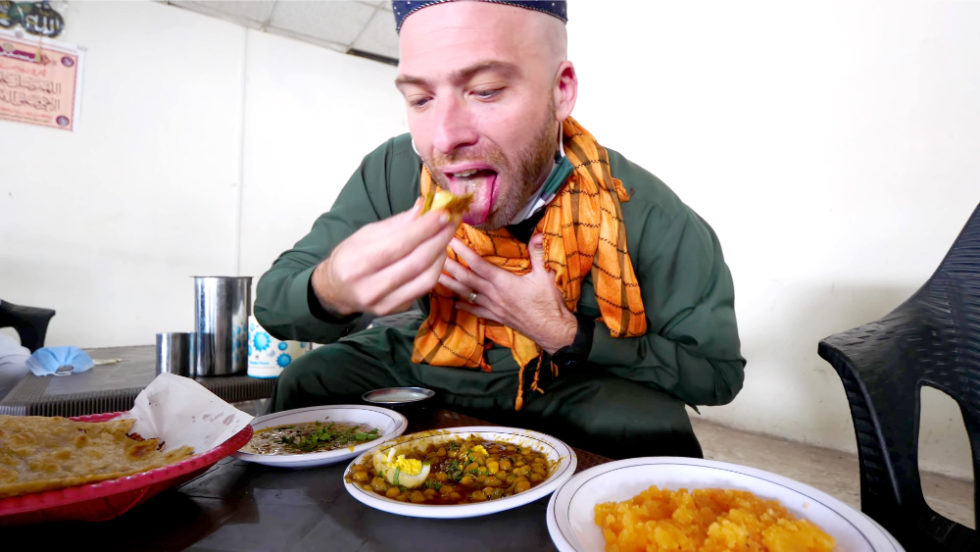 Then, we finished up with our creamy chai, which was piping hot and reminded me of a café con leche. I loved the cardamom flavor! 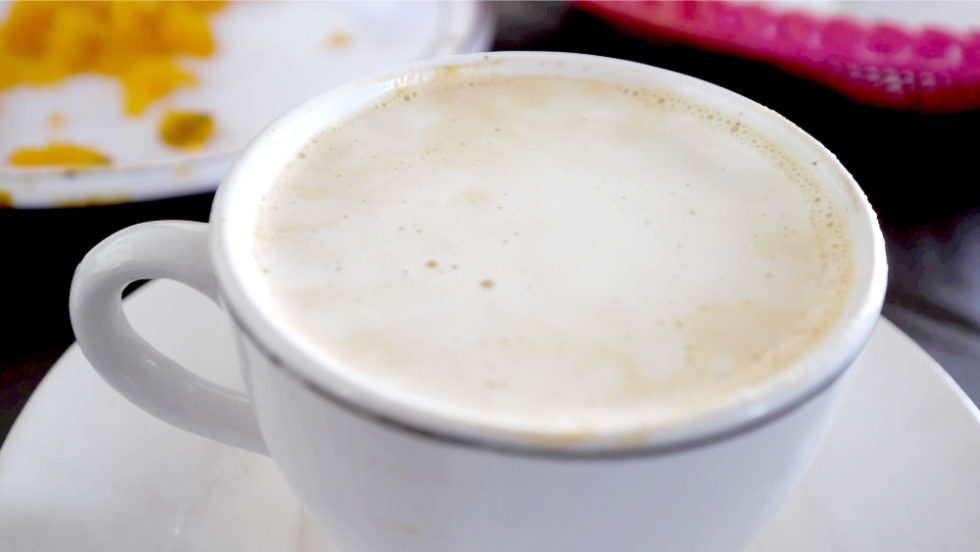 Then, we hit the road to Mardan! The route would take us past lots of restaurants, markets, and villages, and would take us about 30 minutes.

Along the way, we stopped at a livestock market, where merchants had trucks full of lamb, goats, and sheep. They came in lots of different colors. I loved experiencing this. This is the raw and real side of the country! 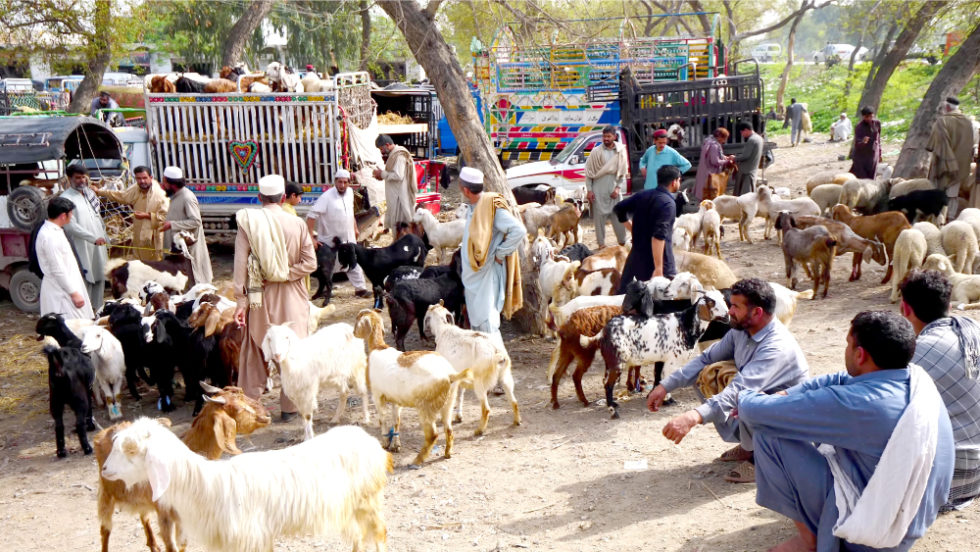 We continued on and entered the district of Mardan and explored Mardan Bazaar. There were tons of vendors and shops everywhere. I got some fresh sugarcane juice and saw some chicken tikka shops, karahi vendors, and more. The vendors were all so friendly! 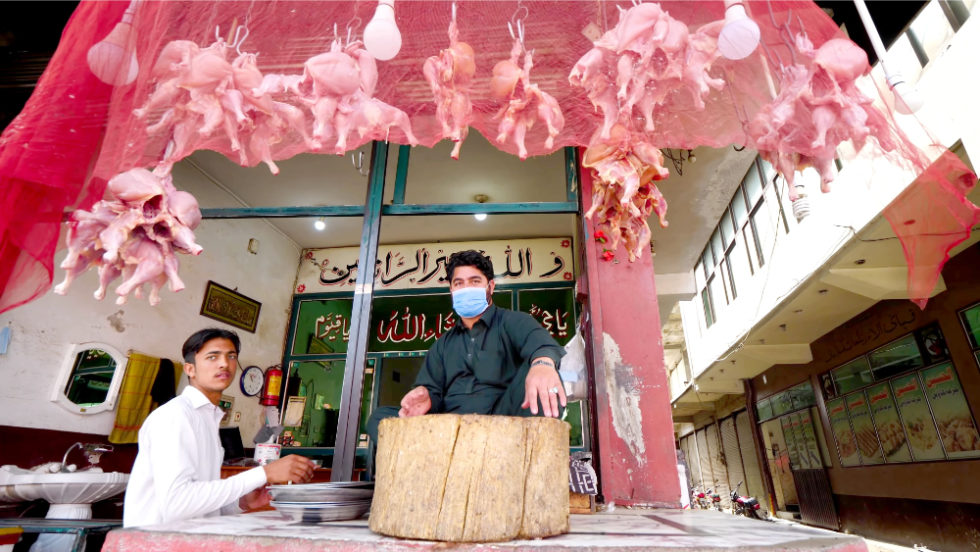 Then, we stopped at Pista House Haleem for some biryani. I hadn’t had northern biryani yet. This kind contained no meat, just two types of meat and spices. It was fantastic! 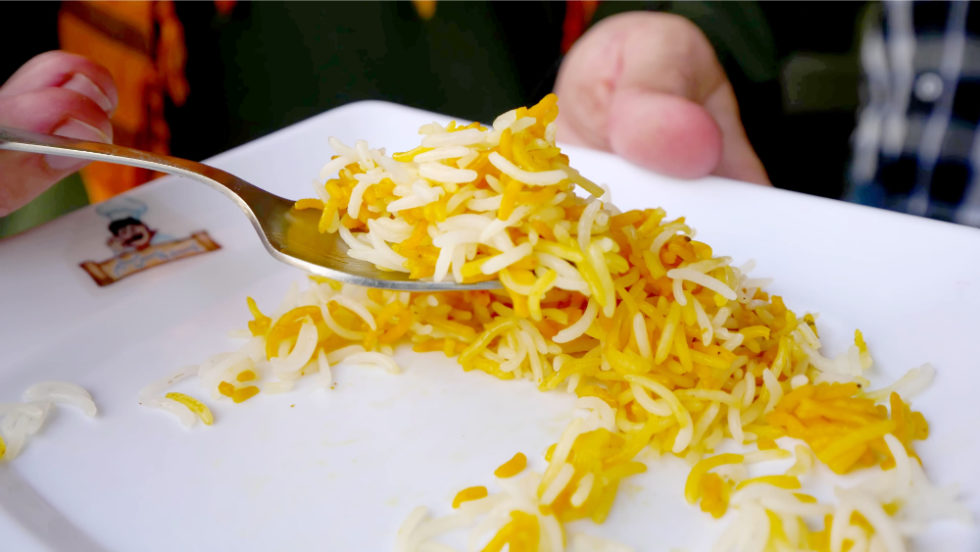 Further on were vendors selling walnuts, chickpeas, channa, and samosas. We stopped inside Mardan Faluda to get some falooda, which is a south Asian dessert that has many variations around the Indian subcontinent. 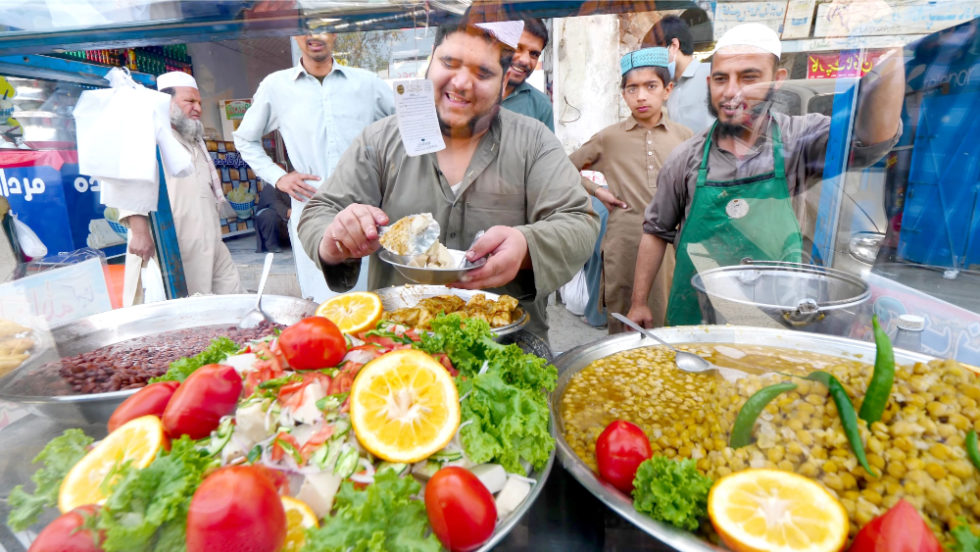 Mardan-style falooda is served in a bowl with milk, malai, chopped kulfi, vermicelli noodles, and jellies. It was a unique variation but I loved it! They gave it to us for free! 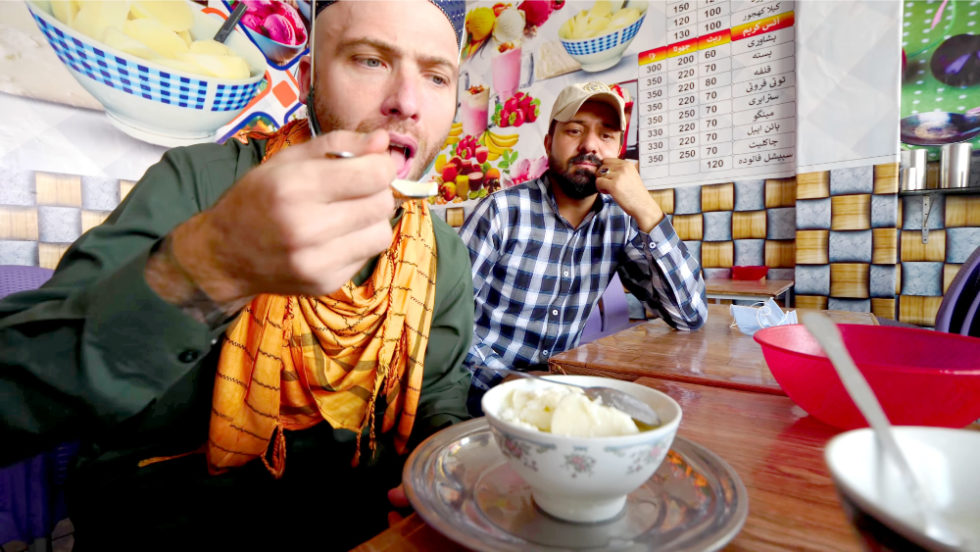 Back on the street, Rashid and I negotiated for a white scarf for 150 rupees/$0.97 USD. We passed more falooda shops and then moved on to the fabrics and bedding section of the market. 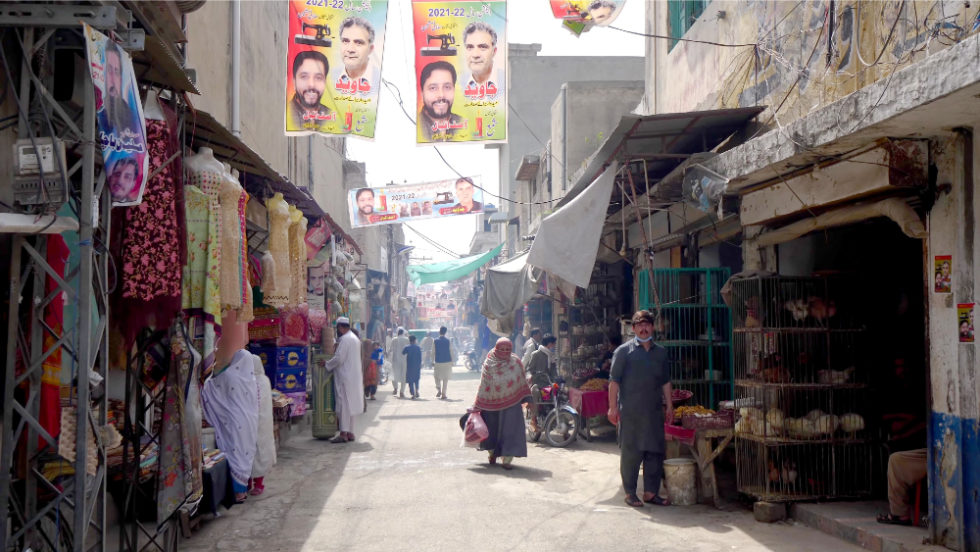 Then, I set my sights on Peshawari chappals at Imperial Collection. Chappals are traditional leather sandals worn by Pashtun men in the Khyber Pakhtunkhwa region of Pakistan. 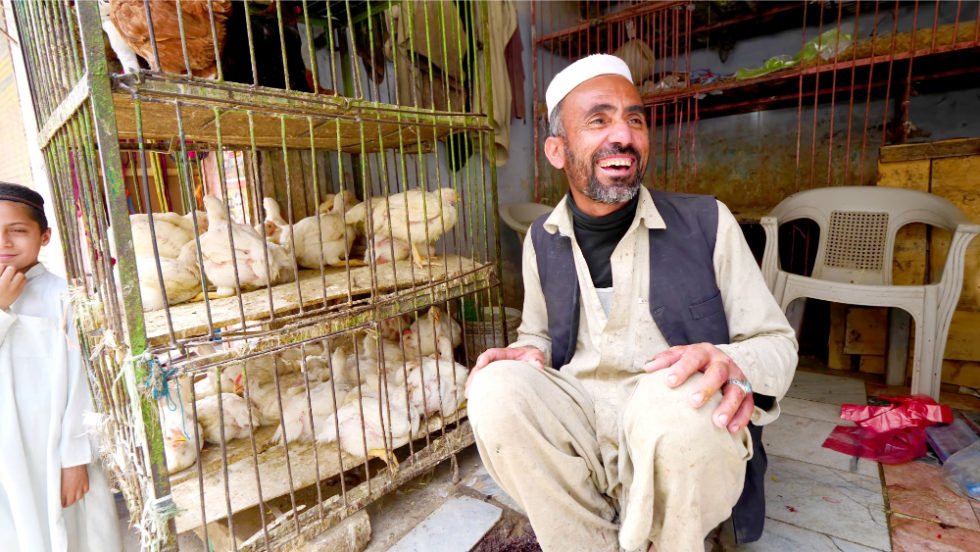 They come in lots of different colors including brown and blue. I wanted to try a blue one. I loved the design and they fit great! Best of all, they’re all handmade and are very comfortable! 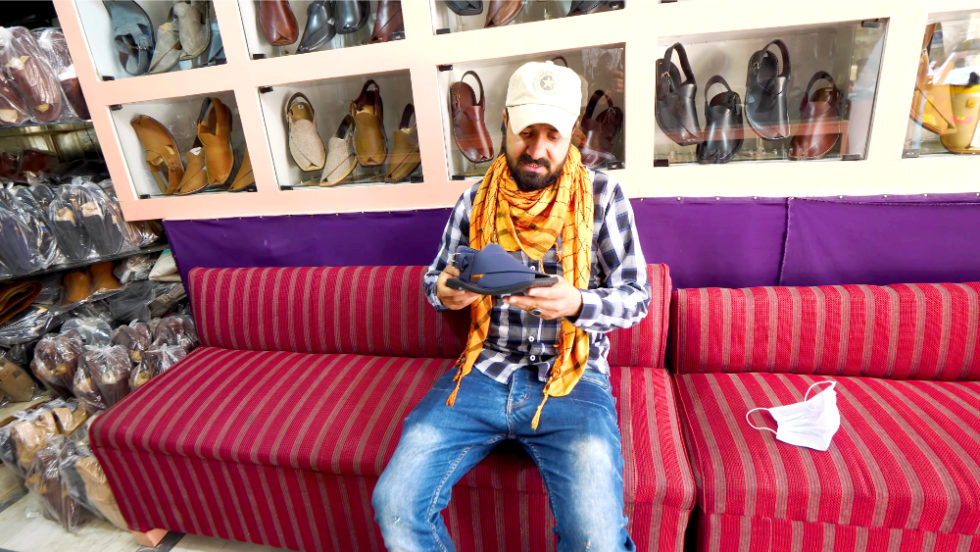 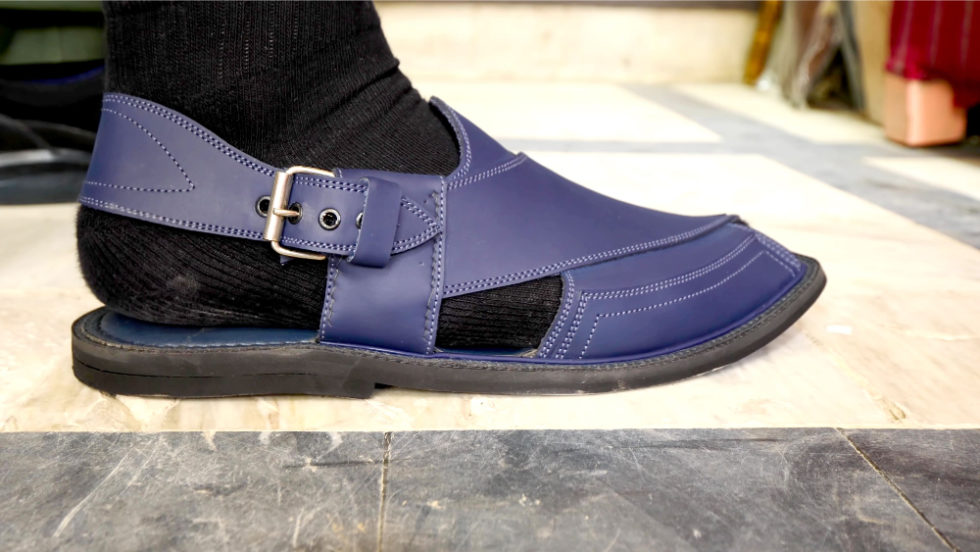 We then headed back out and saw more shoe shops, where they sold different varieties of chappal. Some of them have more designs and fabric on them! 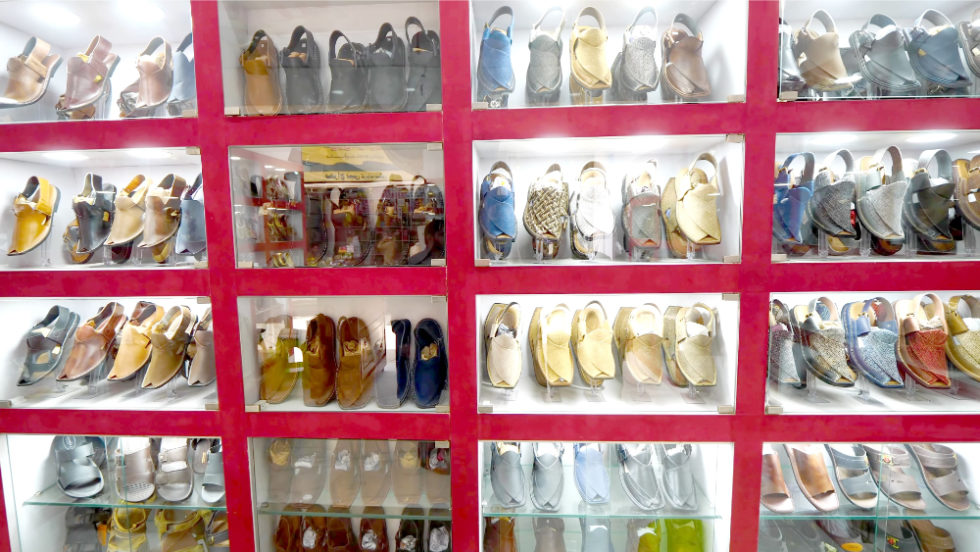 Then, we planned on heading to a kebab shop, but they were closed because it was a Wednesday. You typically can’t find beef or mutton on Wednesdays in Pakistan because it’s against the law. The police in Peshawar are very strict about it and will shut down shops selling them on Wednesdays. 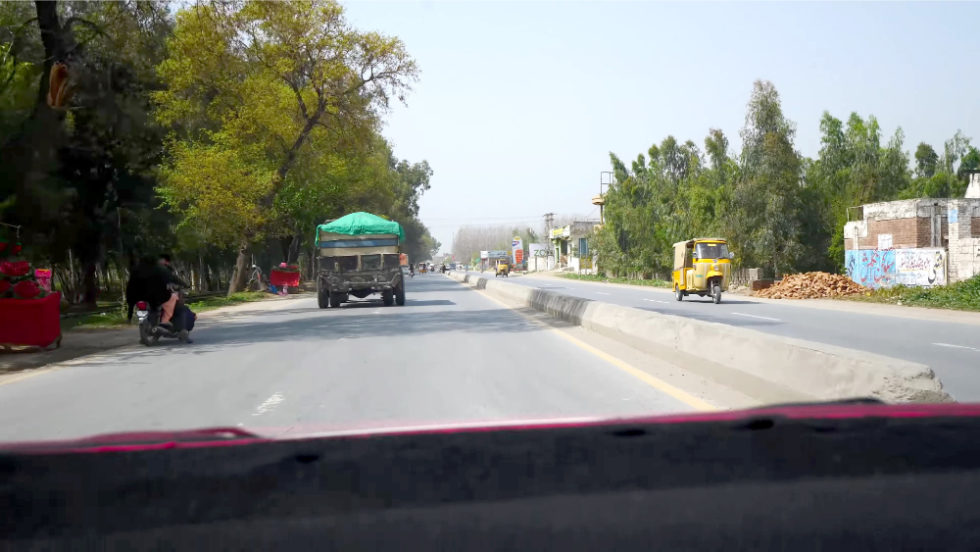 Instead, we ate at PK Hotel & Restaurant to have some lunch! We got some kabli pulao, chicken seekh kebabs, chicken karahi, raita, and naan. The kebabs were tender and juicy. I loved the minced chicken. 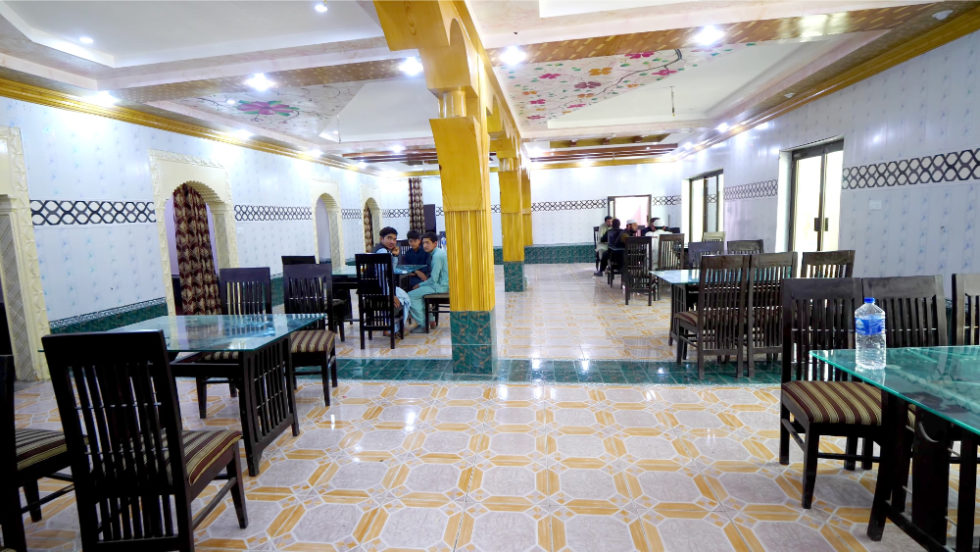 Next, I jumped on the chicken karahi, which was a flavorful tomato-based curry with cream. It was unbelievable!

The garnishes on the pulao gave it a nice, sweet flavor. Eating it with my hands and adding some creamy raita made it even more palatable and flavorful! It was so mild but so good! 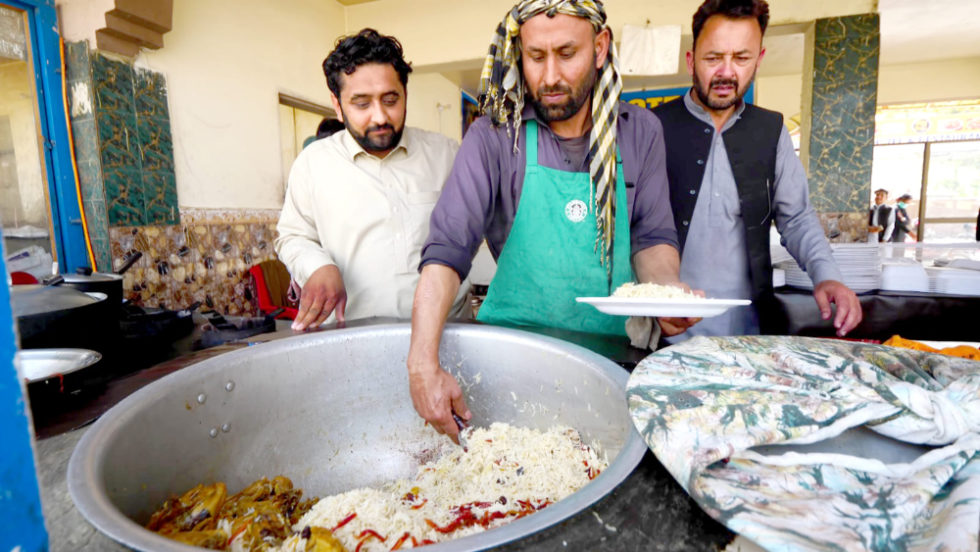 From there, Rashid and I drove five minutes to Takht-i-Bahi, an ancient Buddhist monastery. It costs 500 rupees/$3.22 USD for foreigners to enter, but they add on another 300 rupees/$1.93 USD if you have a camera with you. You must bring your visa and passport to the site in order to get in. 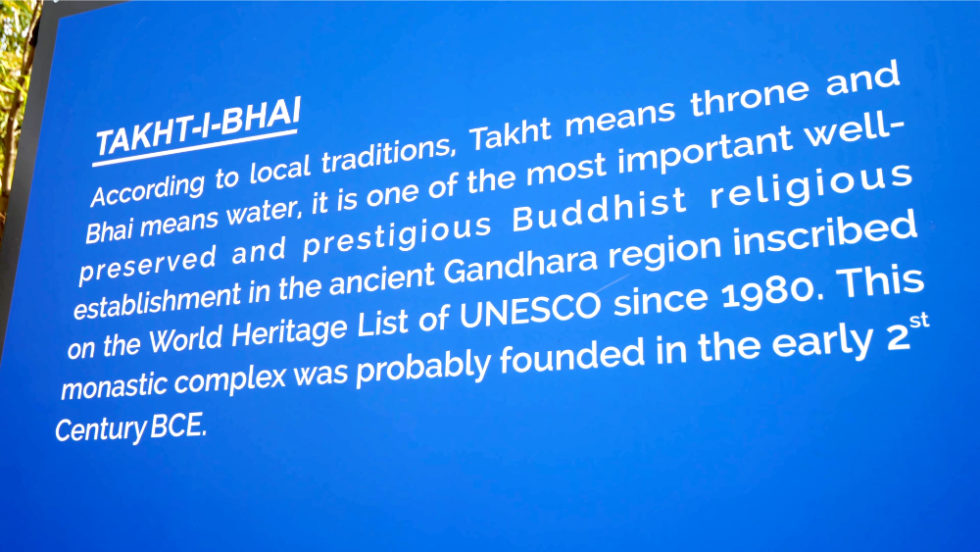 Takht-i-Bahi is a well-preserved monastic complex that dates back over 3,000 years to the early 2nd century BCE. It was named a UNESCO World Heritage Site in 1980. 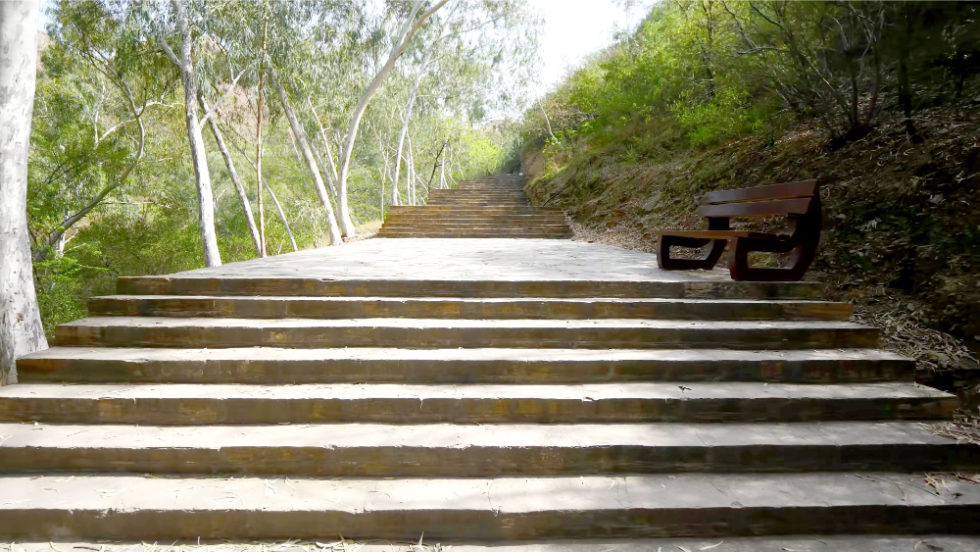 It’s a bit of a hike up the stairs to get to the top, but it’s well worth it. It looks like a massive stone fort. Only 25% of the site has been excavated, and it’s already massive. 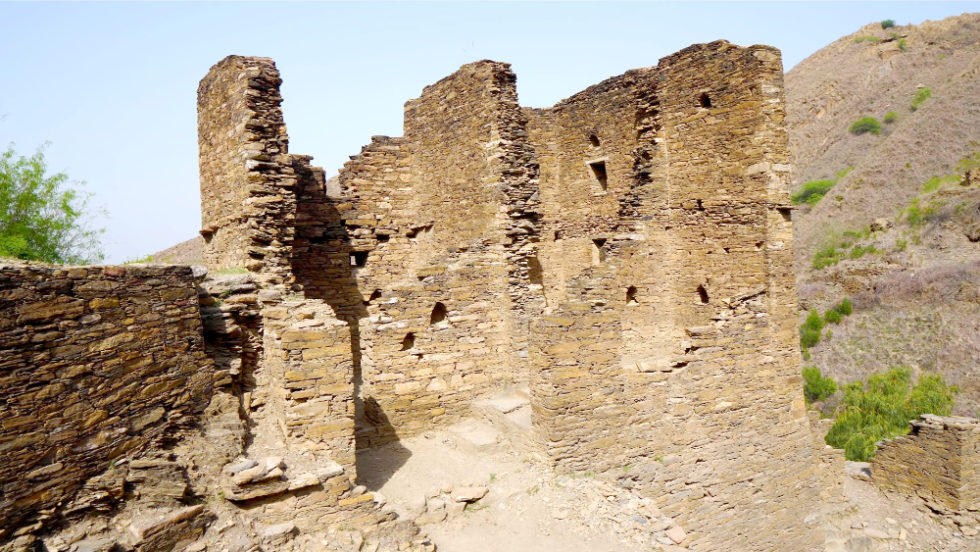 There, we could see several ruins as well as the surrounding hills. I could make out what looked like housing. We also visited a room full of small stupas and one large stupa in the middle that was missing its top. 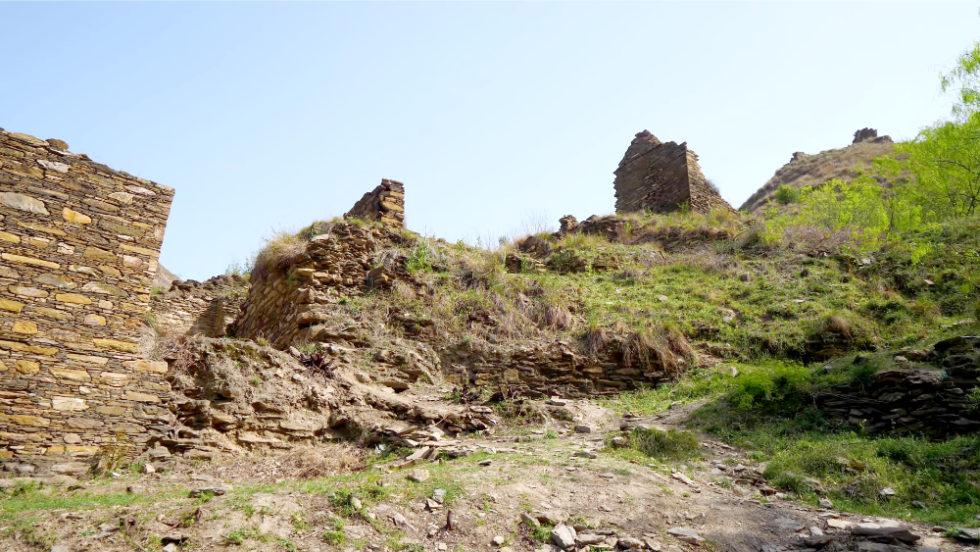 We also saw a meditation cell before we made the steep climb to the very top. You need to be in shape to make it! From there, we could see the entire complex, including the 10-20-foot-high walls. The roof was wooden, so it’s no longer there. 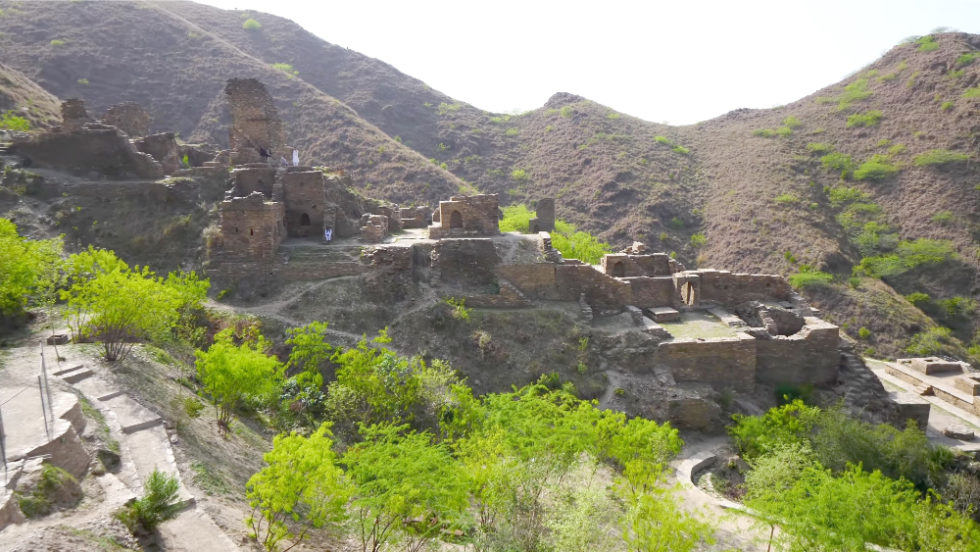 I’ve been to so many ancient sites in my life, but it never gets old. Visiting them is always an amazing trip into the past!

Takht-i-Bahi was really a miniature city. I’d never visited an ancient site like this one, where you can see the structures and the surrounding hills. I could see monk quarters, servant quarters, classrooms, and more. 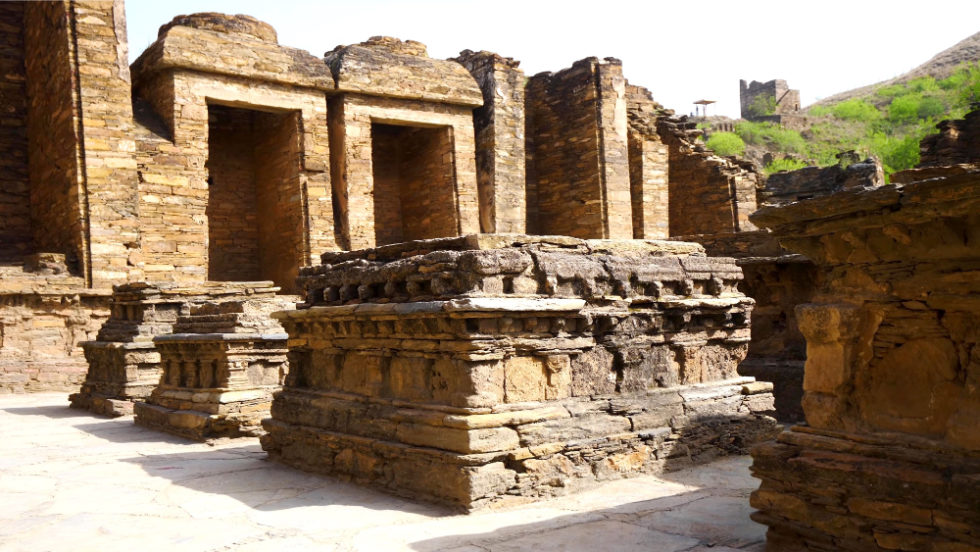 Finally, we stopped by the actual monastery, where there are tons of small rooms and monk cells. 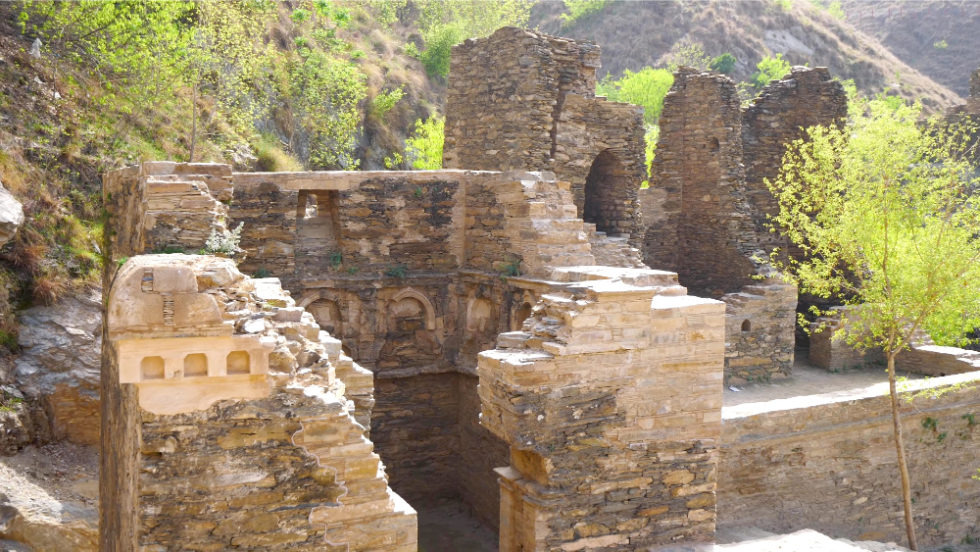 What an epic way to end my rare Mardan street food tour in Pakistan! Huge thanks to my friends at Manaky for bringing me here so I can experience this amazing country. 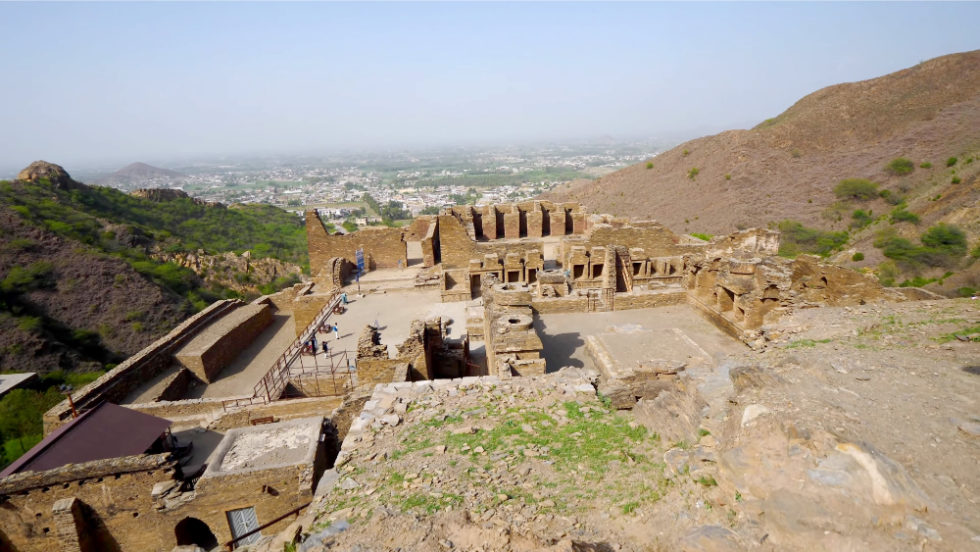 I hope you liked coming with me on my rare Mardan street food tour in Pakistan! If you did, please give this video a thumbs up and leave a comment below. Also, please subscribe to my YouTube channel and click the notification bell so you don’t miss any of my travel/food adventures around the world!