My incredible food adventures in northern Pakistan continued in the amazing city of Peshawar, just minutes away from the Pakistan-Afghanistan border. Come with me as I try some outstanding kebabs and visit Charsi Tikka in Peshawar, go on an eye-opening heritage walk, and visit some local attractions!

My guide Rashid from Manaky and I began our evening on the Heritage Trail in Peshawar. Peshawar is the oldest city in Pakistan and among the oldest in all of Asia. The buildings around me dated back to over 500 years! 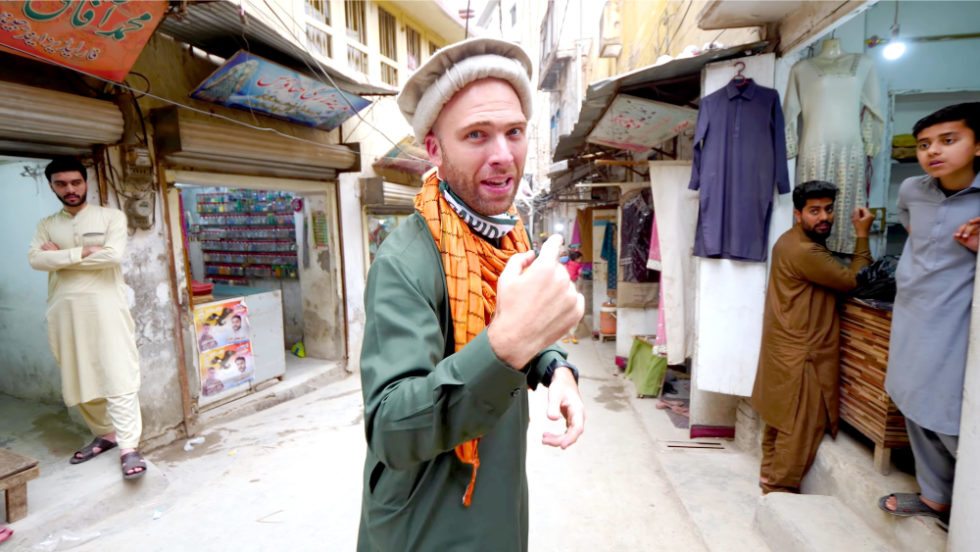 On the street, below the commercial spaces, are lots of craftsmen. I stopped inside a shop where a vendor was sewing dresses by hand, including bridal dresses. They were incredibly detailed and he makes them all on his table! 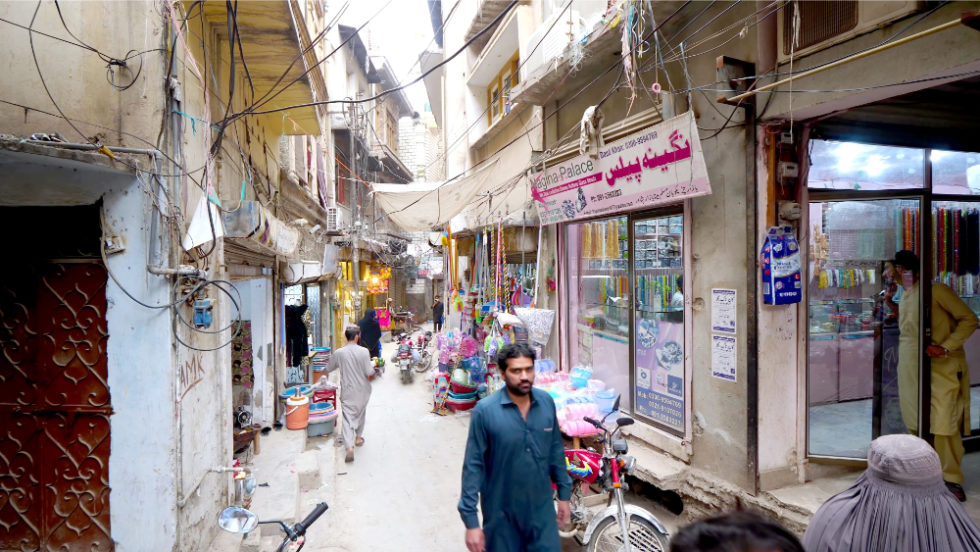 I watched as the men worked on a dress. There was so much beautiful and intricate beadwork and bright colors.  It can take up to a week to make one, 10-12 hours per day! They can cost up to $700 USD. While I was there, they offered me some tea. 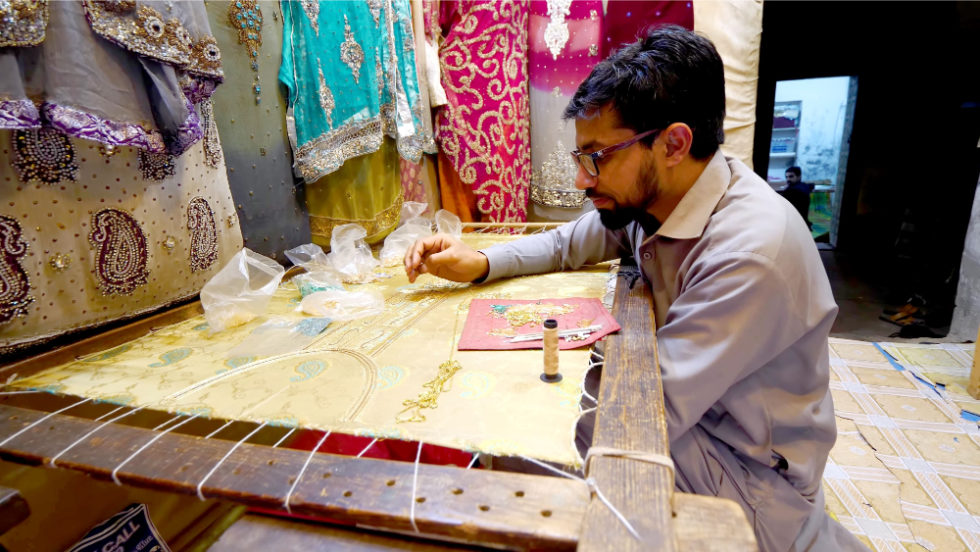 Then, Rashid and I enjoyed the green tea. There was a tiny amount of milk in it. I could taste it. It gave me a nice burst of energy!

From there, we headed back along the Heritage Trail, past more craftsmen and dressmakers. Another vendor invited me into his shop, which sells different beads, pins, threads, and other materials to make dresses. 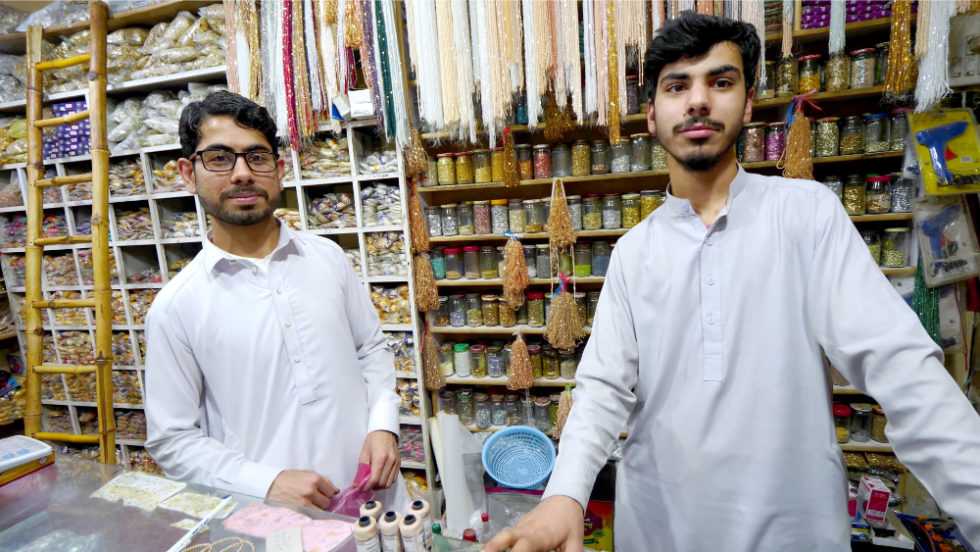 I came across another shop selling Afghani ceremonial dresses. They were extremely colorful, with gold, red, blue, and green elements. And everyone was super friendly! 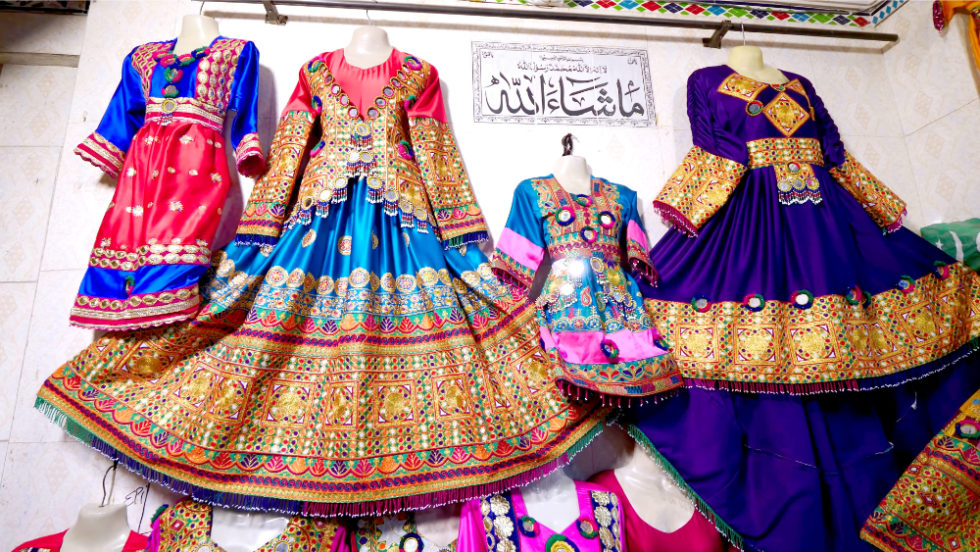 We then walked down a very busy street cluttered with tuk-tuks. There was a massive crush of them! As we continued, I noticed that the architecture of the buildings rising above us was stunning. 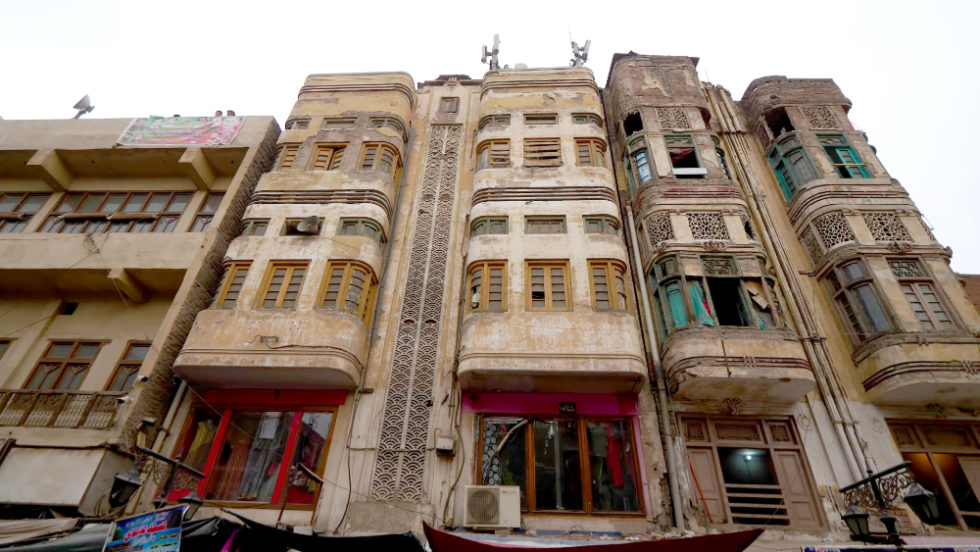 Most of the vendors in this area were selling items for women. Then, we found a vendor selling beef seekh kebabs. They were delicious and full of tasty spices. The chilies and tomatoes in it were exceptional, and the marinated beef blew my mind! 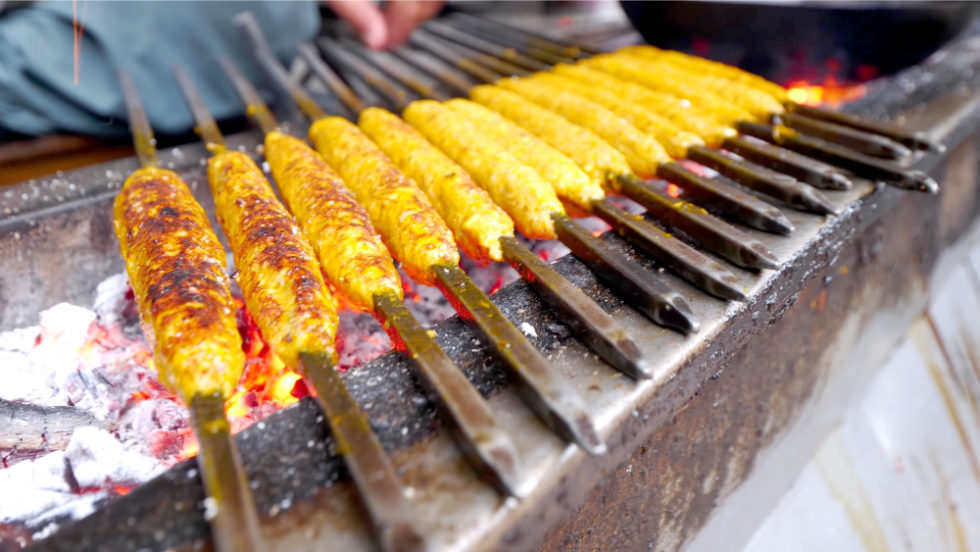 Then, we saw a guy making some chapli kebabs, which I’d tried the day before. Then, we continued past some several-hundred-year-old buildings with some beautiful, enclosed terraces. 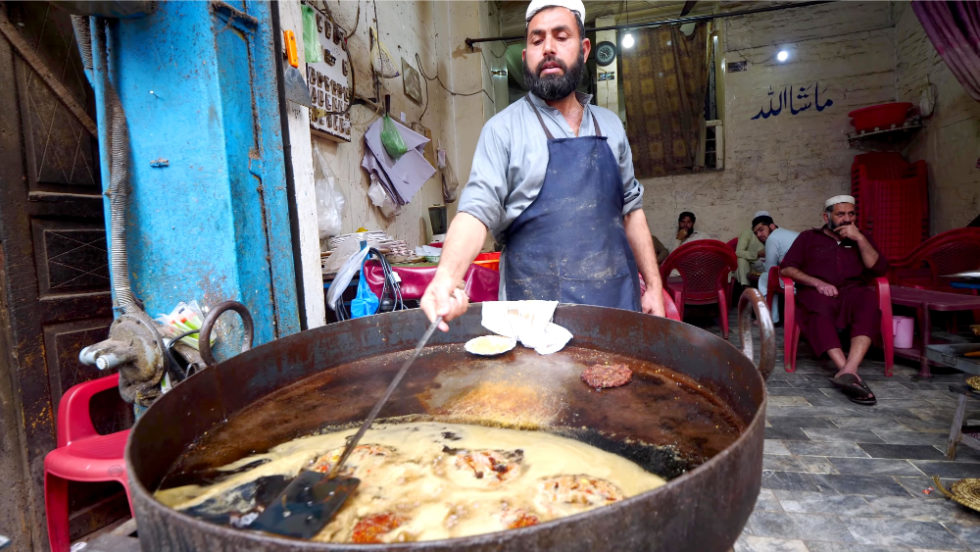 Then, we headed through a gate and down into a cellar for 100 rupees each. Down below the street is a gorgeous UNESCO World Heritage Site that basically served as a guest house. It’s now a museum. It’s much cooler down there! 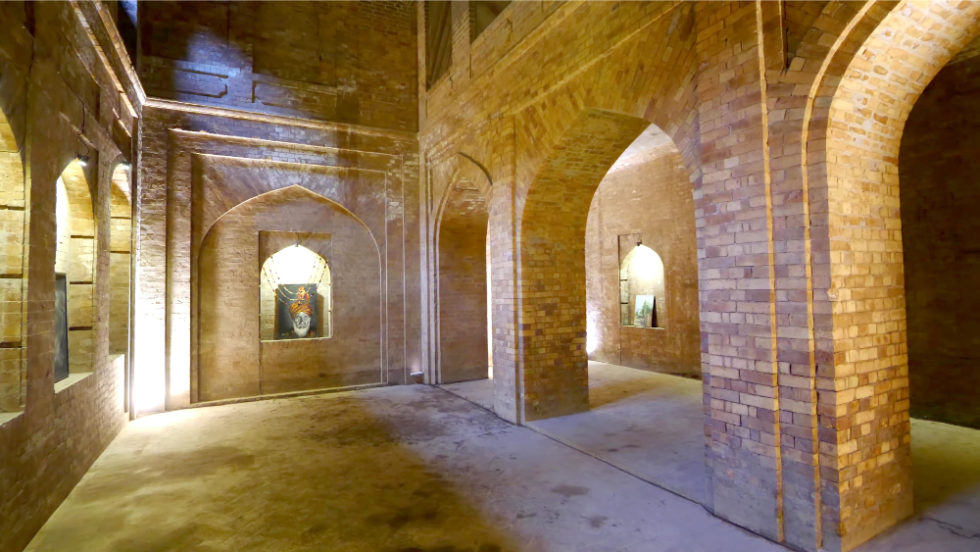 There’s a dining hall down there, as well as a conference room. The building is over 200 years old. You can see cracks in the walls and beautiful brick work.

Further up the wide staircase are servants’ quarters and ventilation shafts. Then, we headed up to a huge terrace that had tons of detail on the walls. 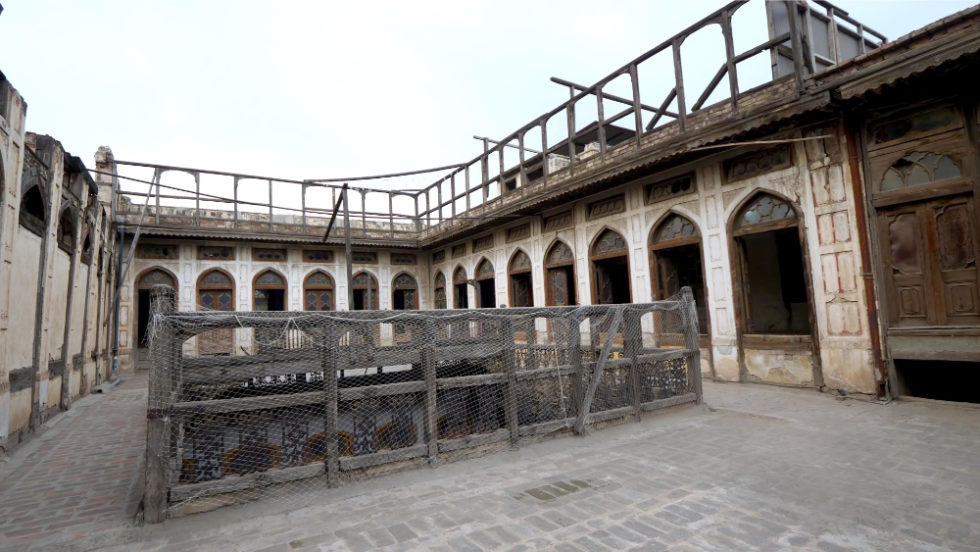 Inside, there’s lots of intricate detail on the ceilings of the guest rooms. Then, I headed up to the rooftop, where I had an incredible view of Peshawar! We had no idea this place was open to tourists, so it was a nice surprise! 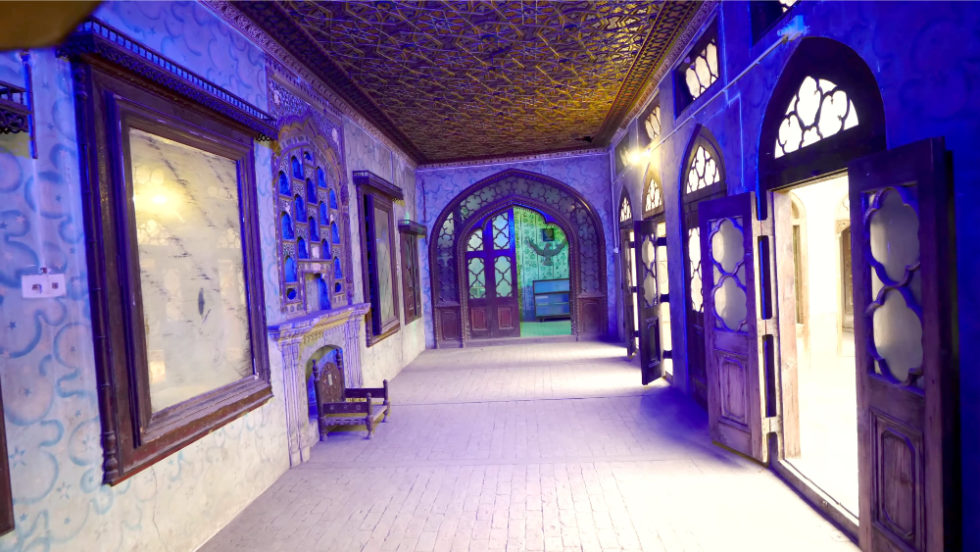 We headed back down to the street and met a vendor making aloo kebabs. It was like a deep-fried mashed potato patty. It was a nice snack. Then, I tried another variety that had more spices and chilies in it! It was the best potato fritter ever! They didn’t even charge me. 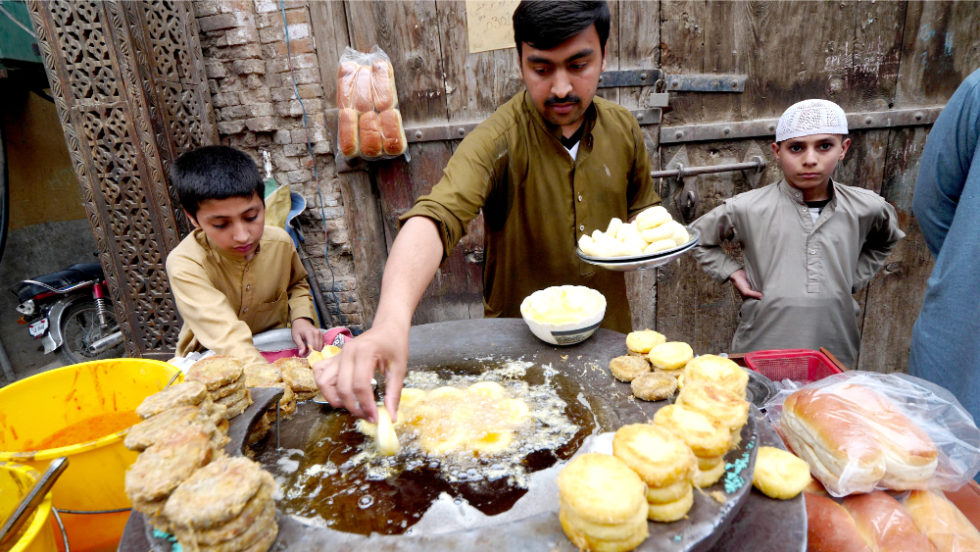 Then, the vendor fed me some sweet sauce before we continued on to the gate. Everyone was so welcoming and friendly, so it took a while for us to get there. We then saw the city’s main gate and rode in a tuk-tuk through the city. It’s the best way to see the city! 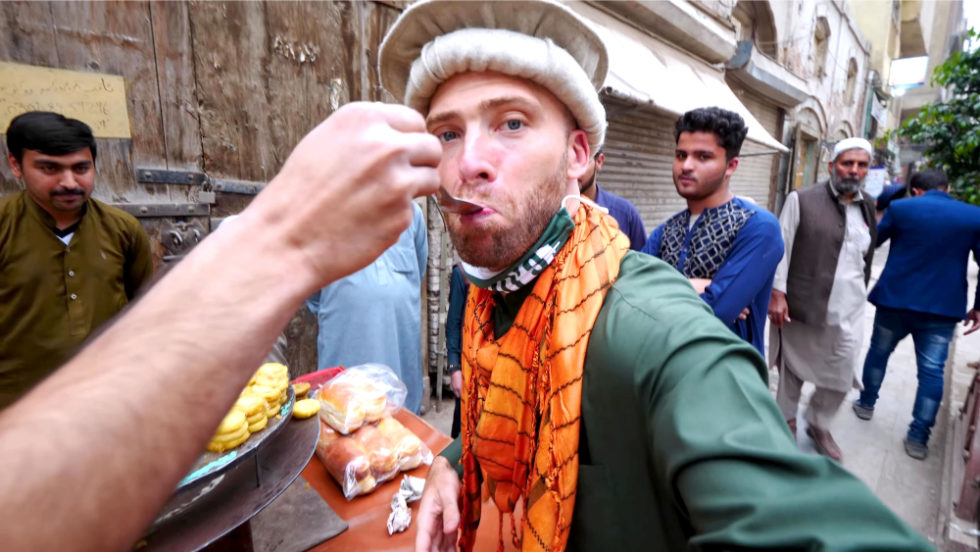 We came across a vendor selling orange slices with black salt. It was very sweet and interesting. Guests are considered king in Pakistan, so they gave it to me for free! The hospitality there is unreal.

Check out my VIDEO: Pakistani Street Food Breakfast!! The King of Parathas in Karachi, Pakistan

Then, as the sun set, we drove to Charsi Tikka, one of the most popular restaurants in Peshawar, Pakistan. Outside was the butcher, who was dismembering a chicken. They then add salt to the chicken tikka and then grill them over coals. I loved how the kitchen was outside! 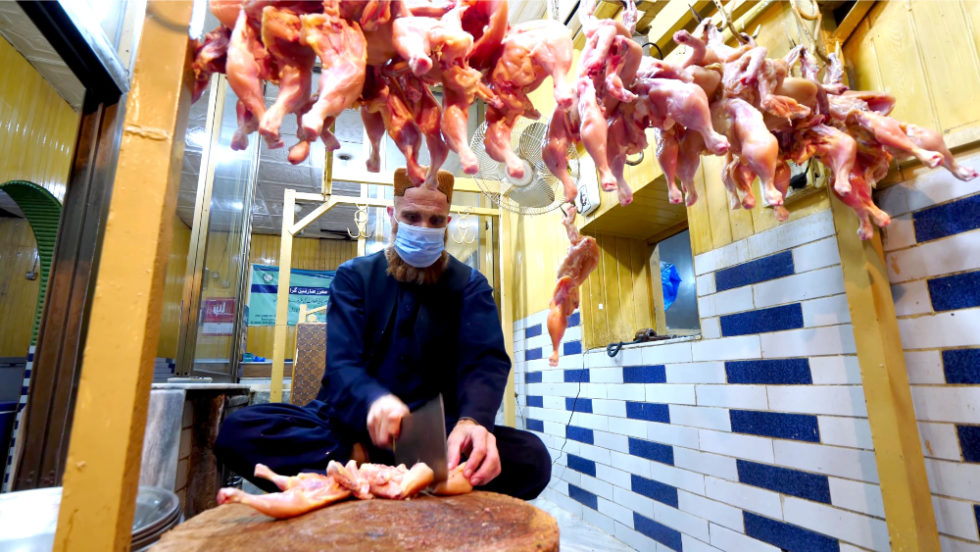 Inside, we took off our shoes and sat on the mats to eat chicken tikka, chicken karahi, naan, raita, and salad. 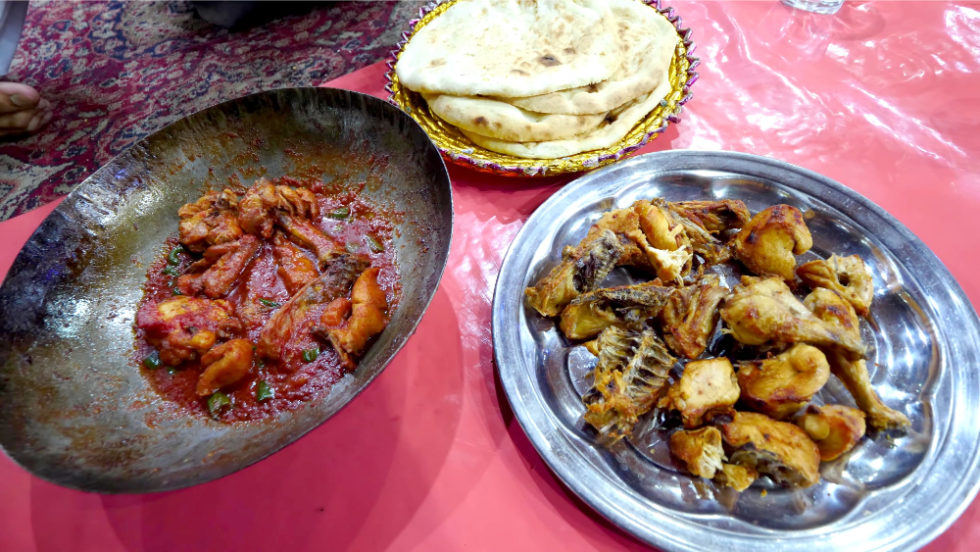 The chicken didn’t contain any spices; only salt. It was so juicy and tasty! I couldn’t get over how good it was. The chicken had a nice char on the outside but wasn’t dried out. 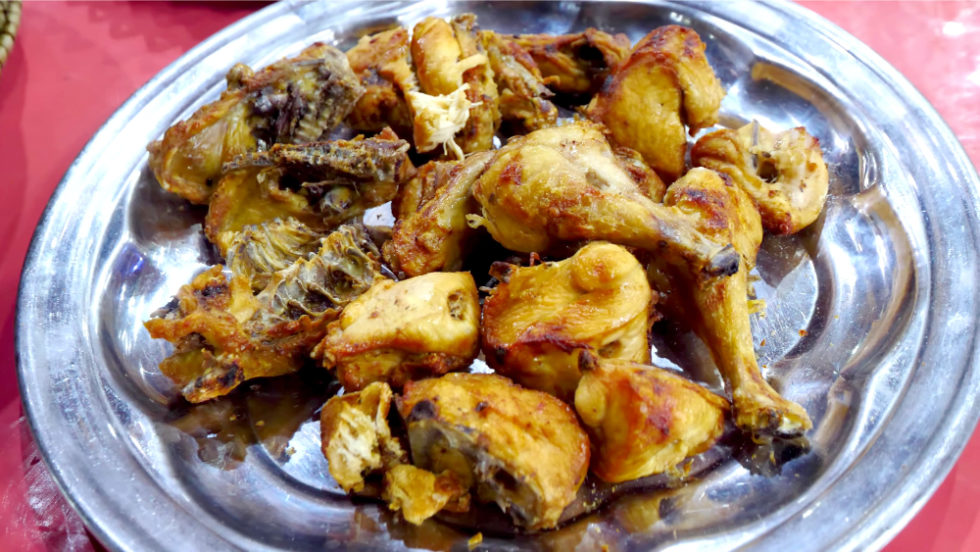 Then, I jumped on the chicken karahi with the naan. The sauce contained chilies and was so tasty, I had to try it right out of the pan! 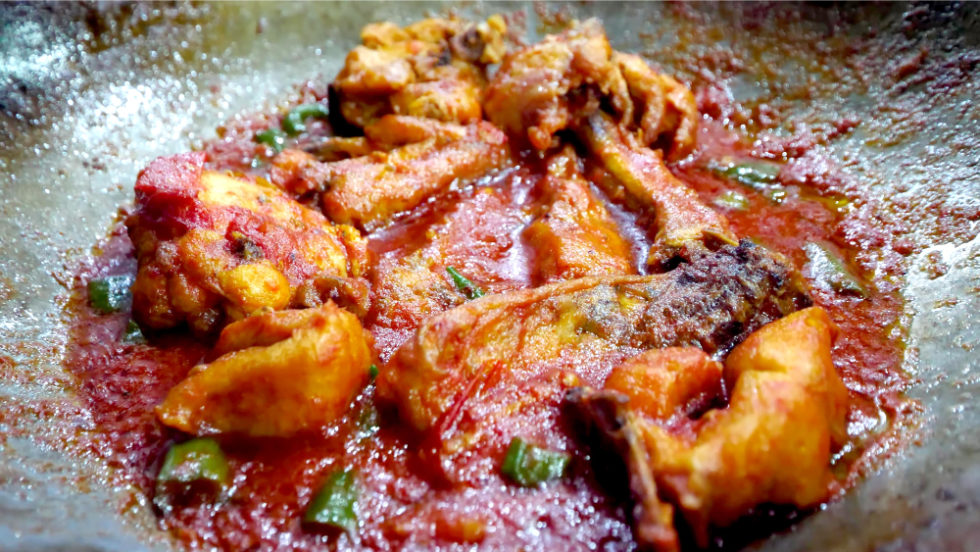 I was in love with the chicken karahi. Using the naan to soak up the sauce is the absolute best. The grilled, smoky flavor really comes through, even with the rich sauce! It was mind-bending! 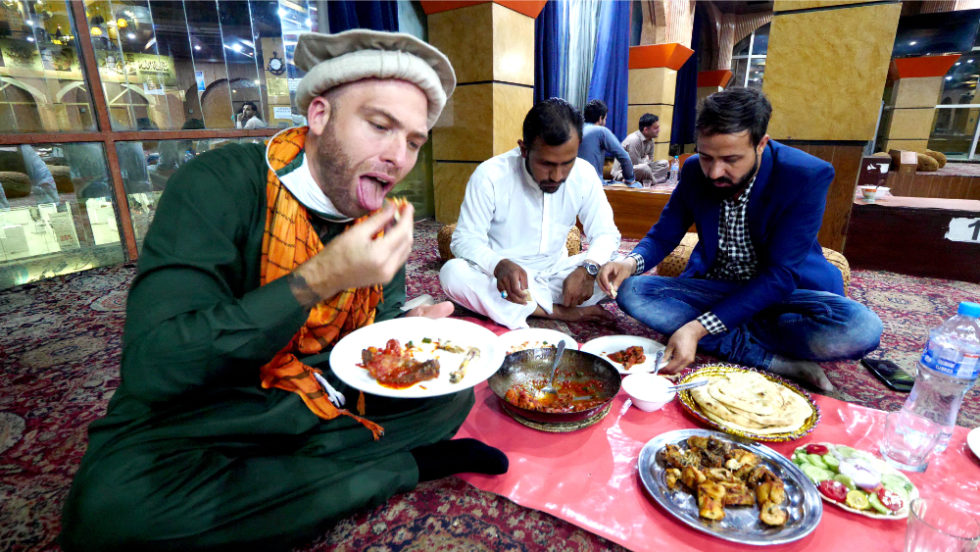 The chicken wasn’t bony at all. Even though I’m usually a huge spice guy, I loved that the karahi was so mild. Peshawar cuisine is very mild in terms of heat and spices compared to the food in other parts of Pakistan. 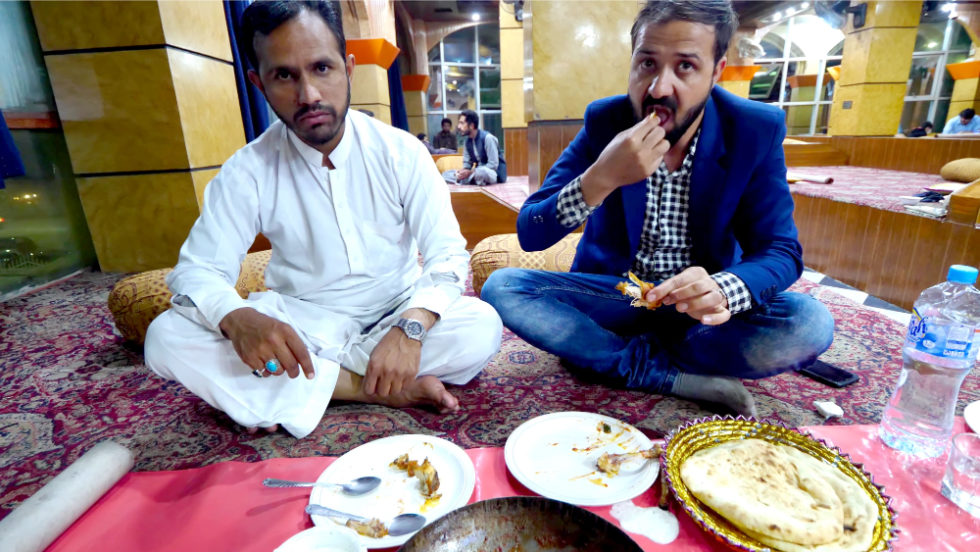 But, as I’ve learned from traveling the world and trying different cuisines, just because a dish doesn’t contain a lot of spices, doesn’t mean it won’t be delicious!

Then, after you finish eating, you can lie down on the pillows and relax! It was the perfect way to end my kebab and Charsi Tikka experience in Peshawar, Pakistan! 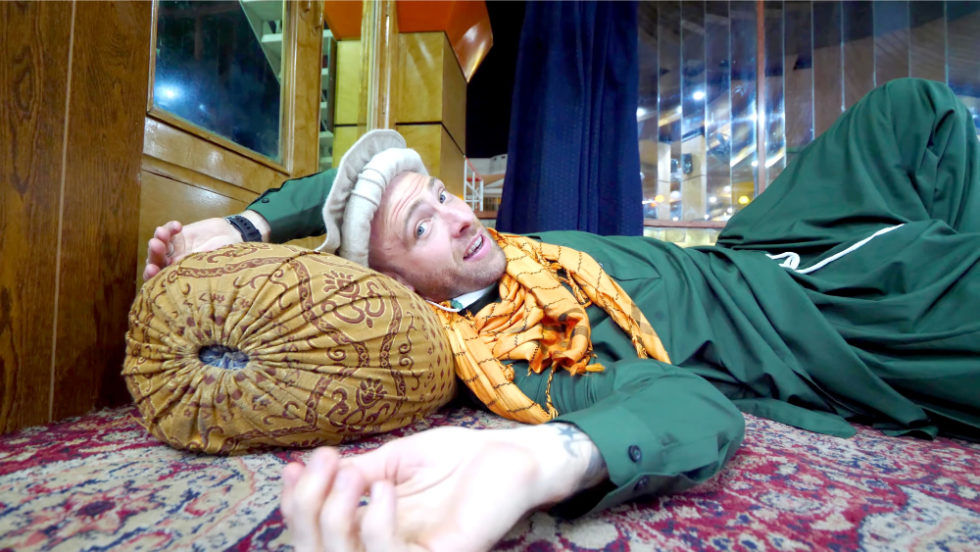 I hope you liked coming with me to Charsi Tikka in Peshawar, Pakistan! If you did, please give this video a thumbs up and leave a comment below. Also, please subscribe to my YouTube channel and click the notification bell so you don’t miss any of my travel/food adventures around the world!