After arriving in Lahore in eastern Pakistan, I continued exploring the city’s cuisine well into the night! Come with me as I dive further into the world of Pakistani street food, including the legendary tawa chicken in Taxali Gate Bazaar in Lahore, Pakistan!

My evening began at the historical complex that contains Jahangir’s Tomb, one of the most important sites in the city. Jahangir was the fourth Mughal emperor. My guides Rashid and Adeel from Manaky and I were pumped to explore more of the city together! 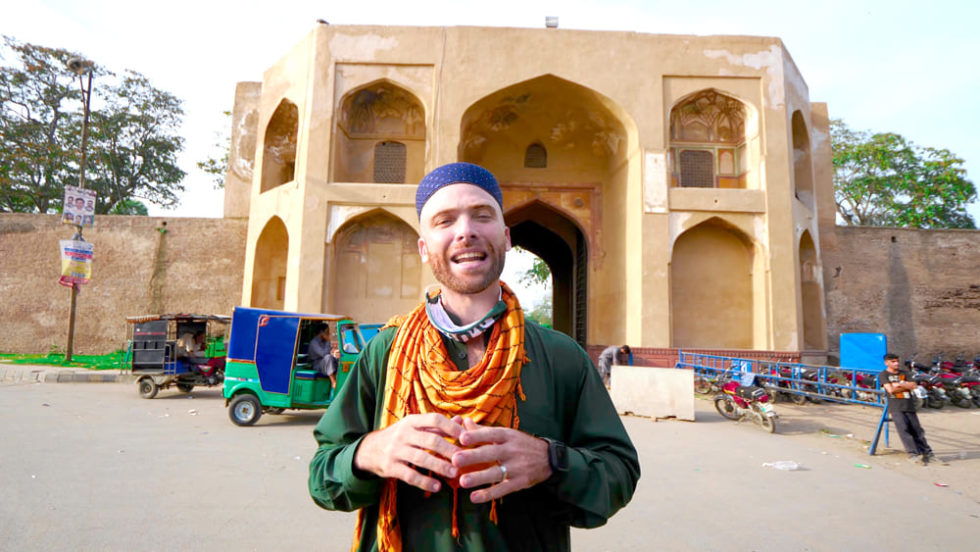 The complex is made up of three important sites: Jahangir’s Tomb, Asif Khan’s Tomb, and Akbari Sarai. Our first stop, Akbari Sarai, is a series of tombs and caravan inn, or sarai, that was built in 1637. It became a UNESCO World Heritage site in 1980. It was initially meant to house travelers and caretakers of Jahangir’s Tomb. 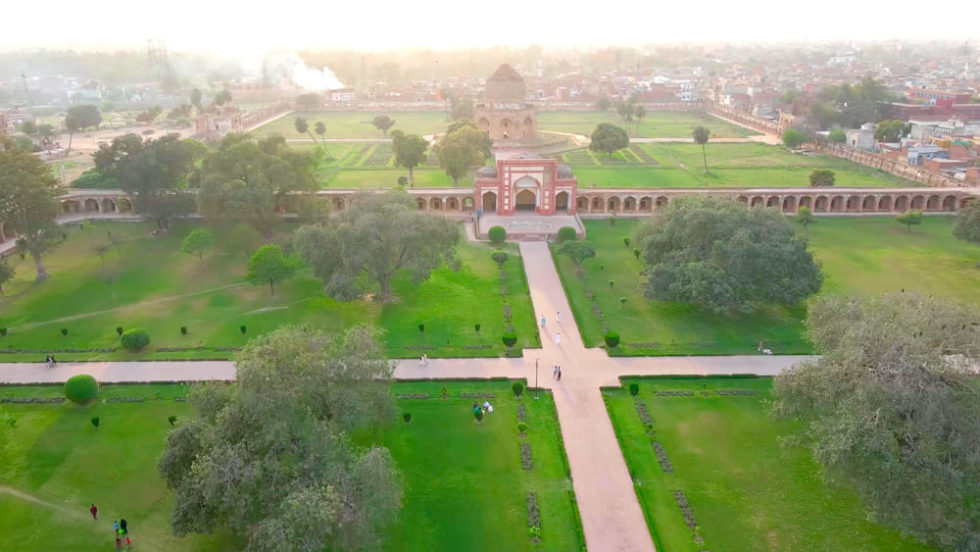 Akbari Sarai is notable because it’s the best-preserved sarai in all of Pakistan! You can see several hundred rooms for the guests. There are also four different gardens! 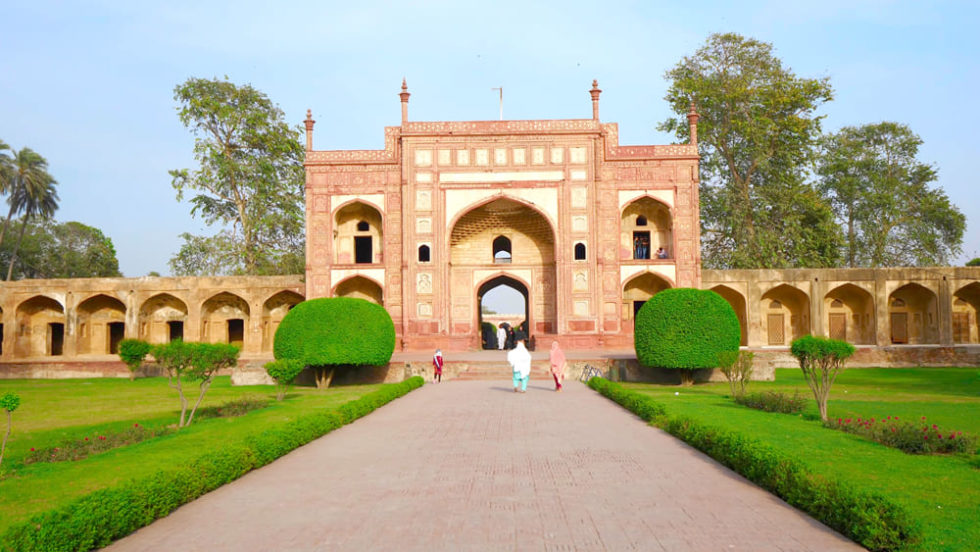 The main gate to the tomb is very beautiful and features stunning Mughal-era architecture. The colors were bright and vibrant! 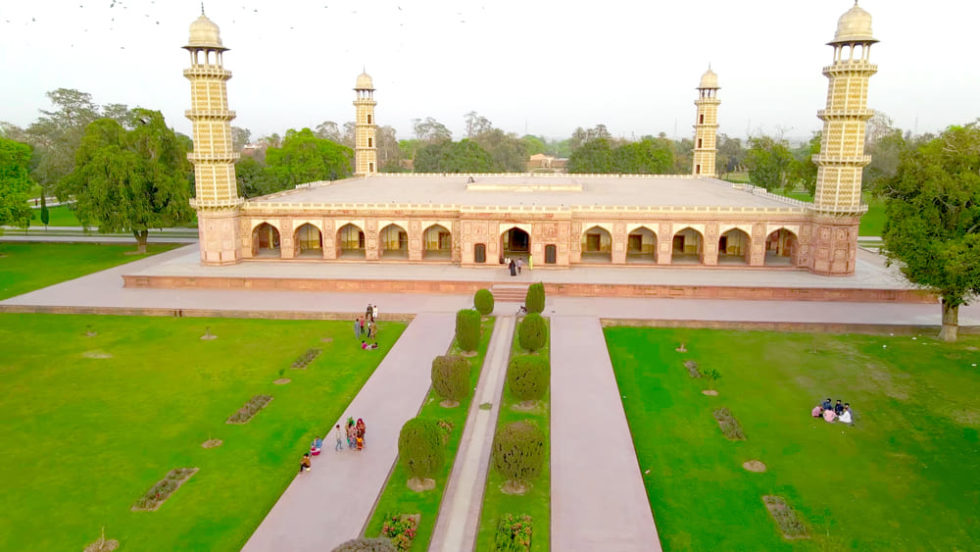 We headed into one of the rooms of the caravanserai. It was maybe 100 square feet, so it was pretty tiny.

All Mughal architecture sites featured water channels and fountains, and this site is the same. There are water channels flowing in all four directions from the main building. The actual tomb reminded me of the “Baby Taj” in Agra, India. 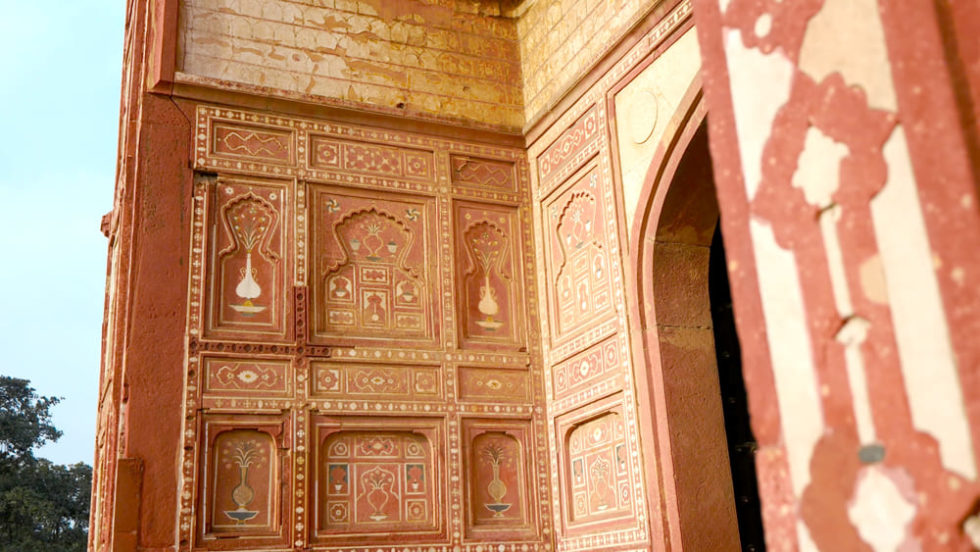 The walls are made of red sandstone and are imported from Rajasthan. There are also marble inlays. The designs feature flowers and other geometric designs and are really intricate. 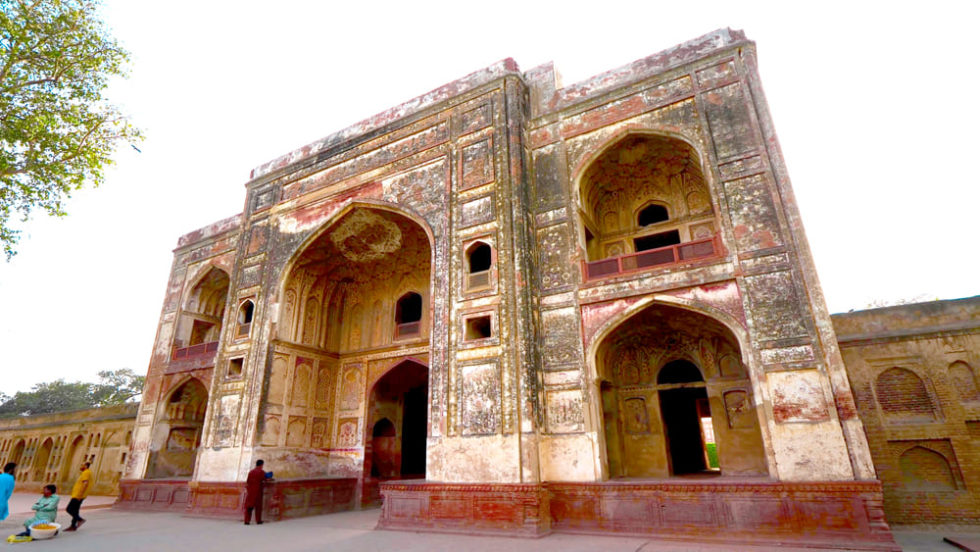 We took off our shoes to head inside. The colors on the walls were gorgeous. Further on is the tomb, which is made of white marble and features intricate flower designs cut into it. 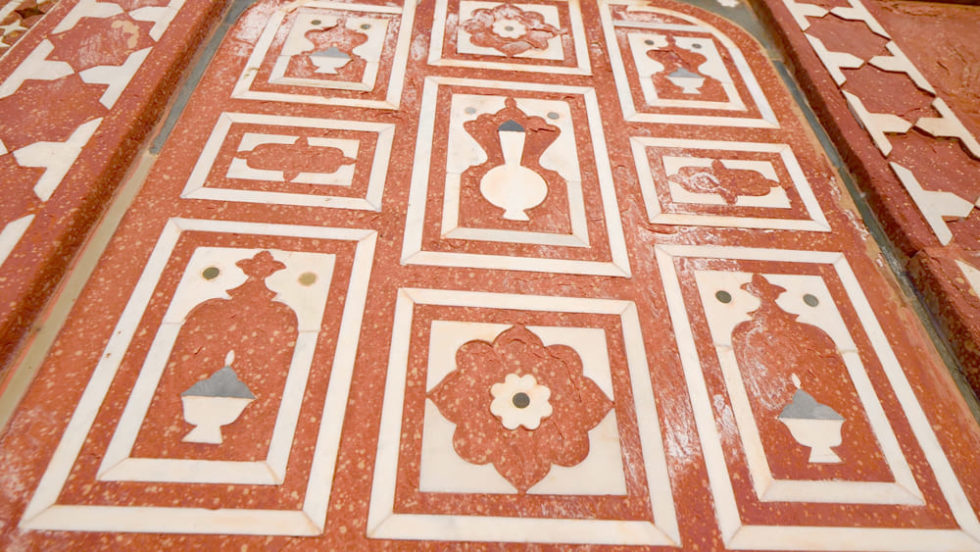 The casket is decorated with verses from the Koran as well as the word “Allah” in Arabic. It’s very grand and sits on a platform with lots of layers! 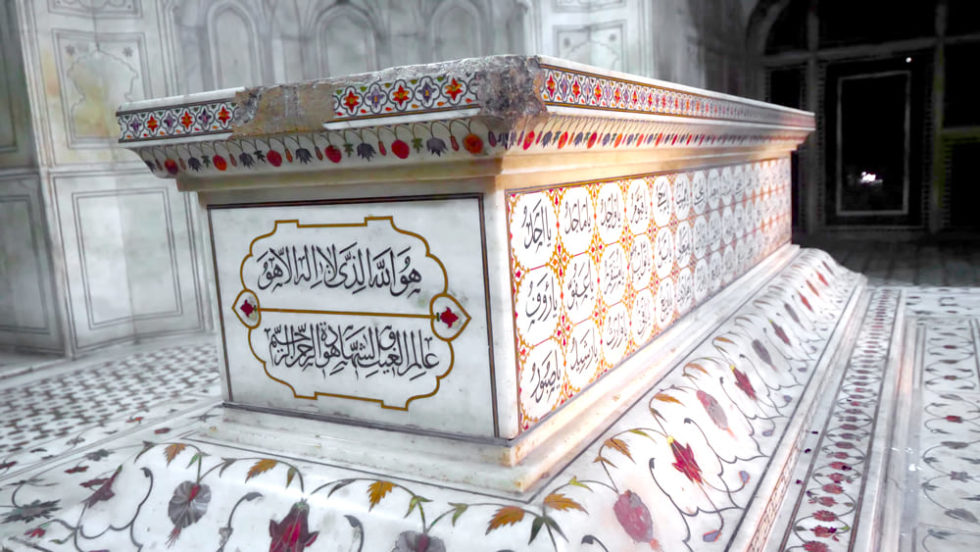 Then, we headed up to the rooftop, where we had a great view of the four minarets at the corners of the building. We also could see the views of the entire site, including the gardens. It only costs 500 rupees/roughly $3 USD to enter the site. 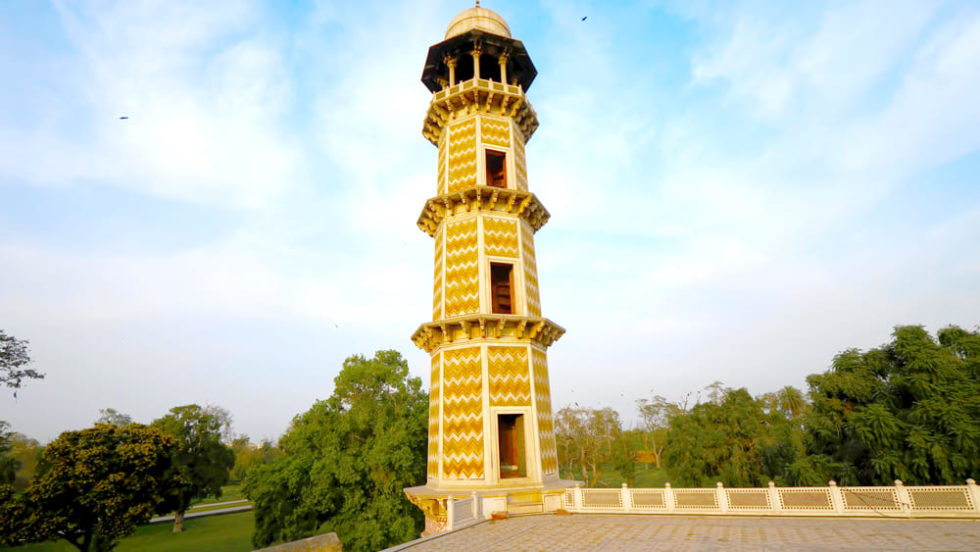 Then, we climbed to the top of one of the minarets to get a bird’s eye view. Here, we had better views of the gardens, as well as the small community around the tombs. I recommend coming around 4-5 p.m. to beat the heat and the crowds! 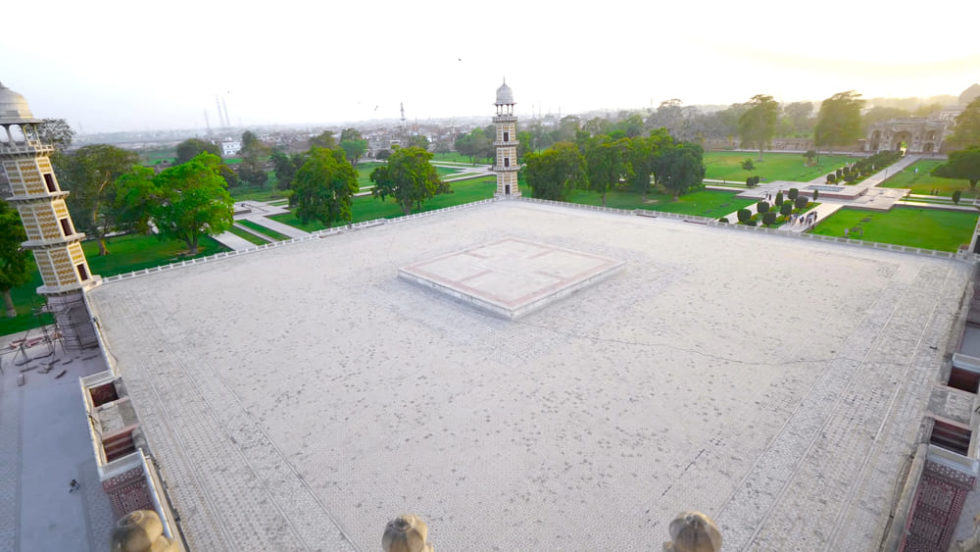 Next, we hopped in the car and drove to a Taxali Gate Bazaar. Right next to it is the biggest mosque in Lahore, which is gigantic! Unfortunately, we couldn’t go inside with cameras, as they only allow phones.

We headed down the bustling food street, where we saw tons of vendors selling malai, biscuits, barbecue, and more. The famous chicken tawa place wouldn’t be open for another 30 minutes, so we continued exploring. 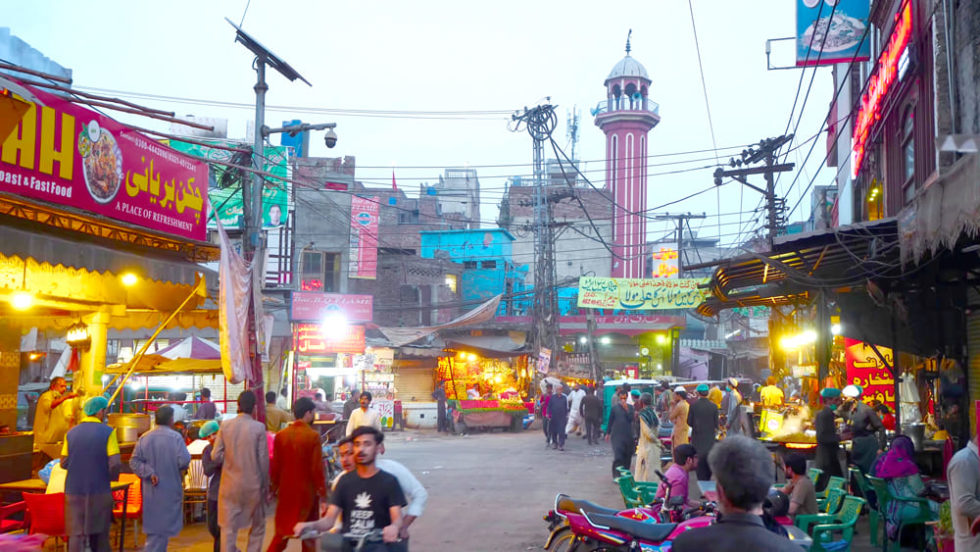 I wanted to get a snack from a vendor! I got some dal chawal, which is a yellow dal stew with chicken. It’s served on top of rice with cabbage salad on the side. 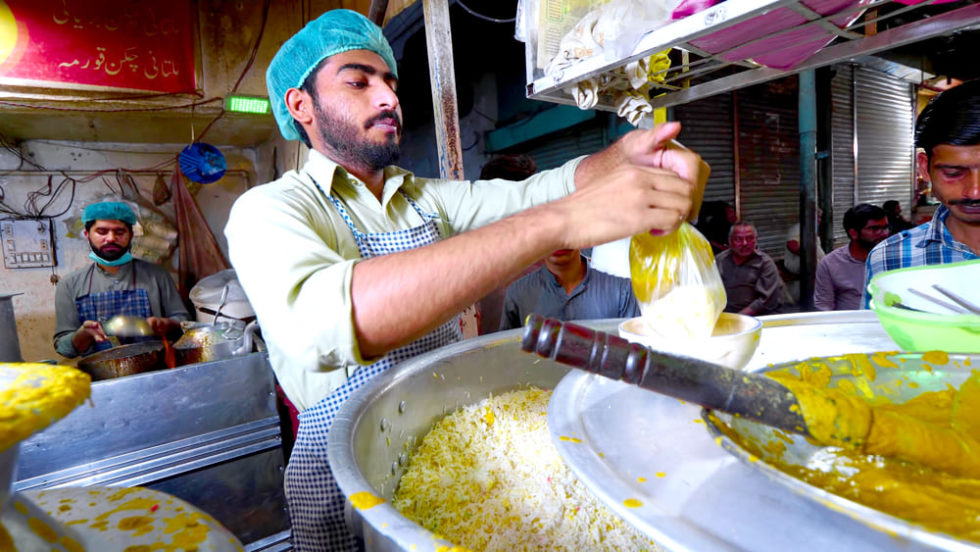 It was delicious but wasn’t too spicy, but it did contain a lot of black pepper! The consistency was nice and pasty and the salad added a refreshing crunch. 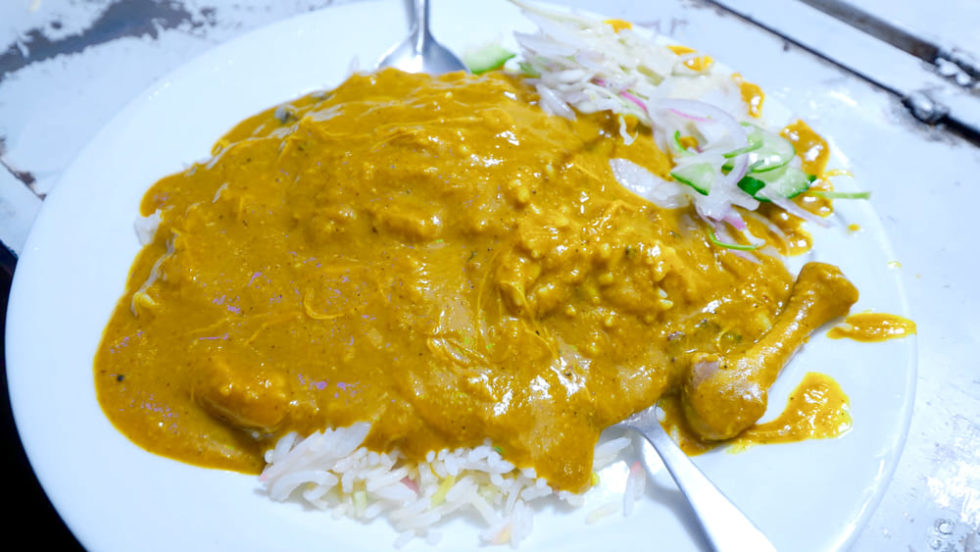 There was also a delicious, creamy component to the salad, which I thought was raita. Overall, it was another winning dish for me! It’s a popular dish in homes around Punjab! 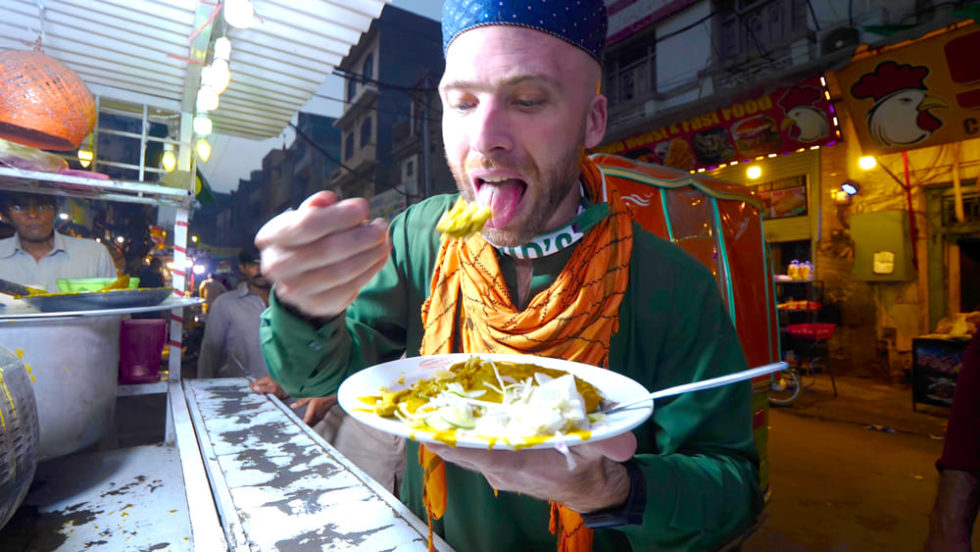 Next, I tried chana pulao, a rice dish containing white chickpeas. This pulao was spicy and also came with a salad and raita. The spices made the dish feel like a biryani! It was one of my favorite dishes so far because of the heat! 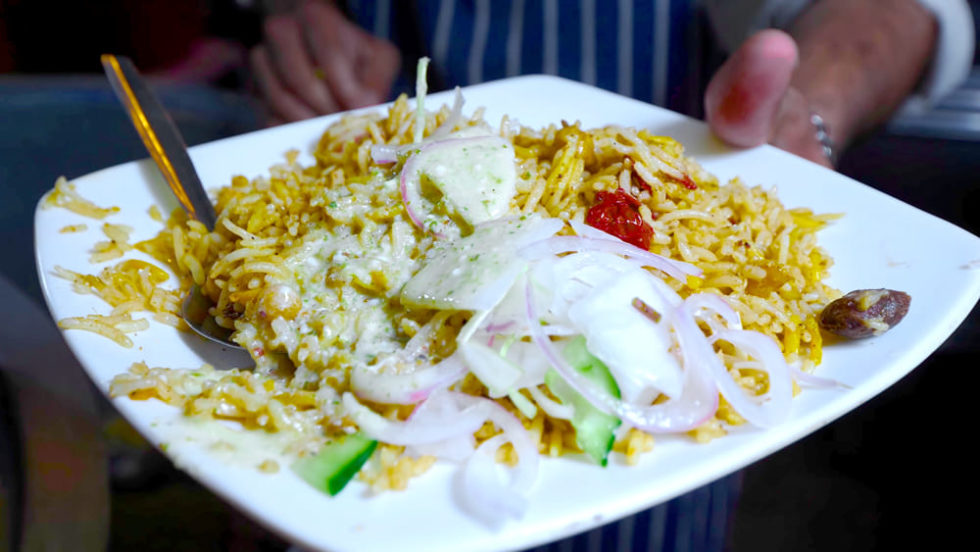 Then, we got some aloo pulao, which contained big chunks of potatoes. It was spicy and moist. I was blown away by these rice dishes! They were all so diverse and I hadn’t had any of them anywhere else in the country! The vendor didn’t even charge us for them!

Next door is a vendor selling kebabs and fried chicken, and then we found some guys baking nonstop naan. Everyone was so nice! 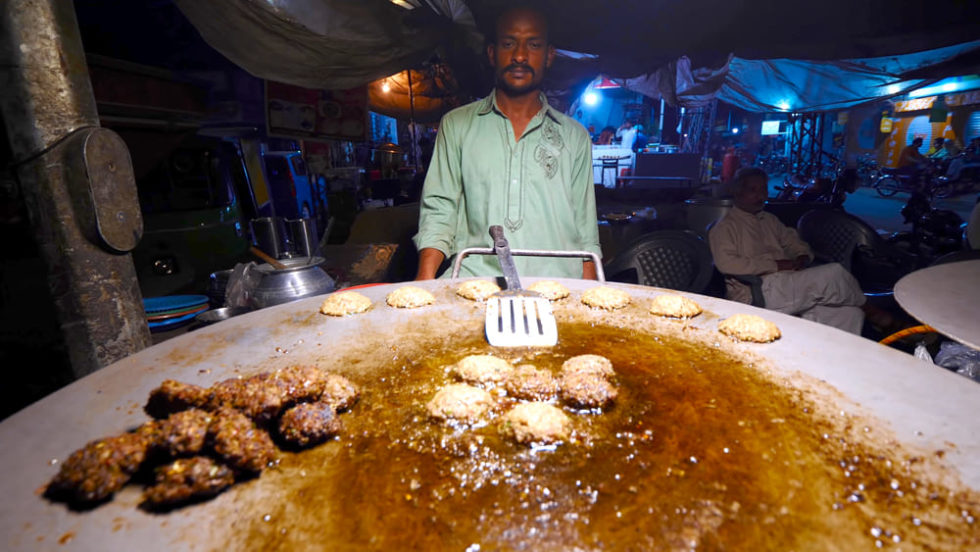 Others were making organic chicken soup in huge vats and beef kebabs. The beef kebabs were super juice and made of mincemeat. I loved the onions and herbs in it! 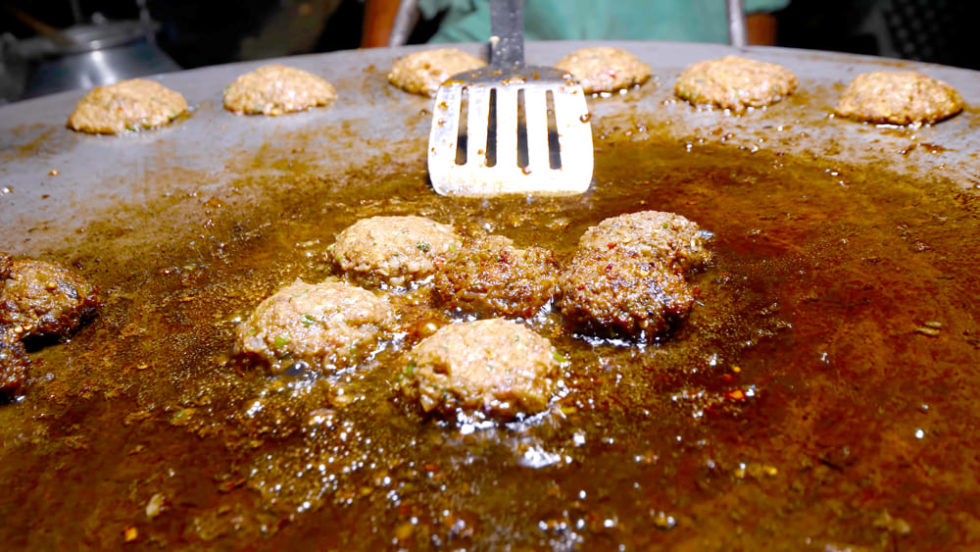 Once we reached the end of the street, we doubled back to Arif Chatkhara House. Their Pakistani street food dish, the tawa chicken, is legendary in Lahore, Pakistan. The dish contains masala, yogurt, ghee, and green chilies. The fumes from the chilies hit you even when you stand near the cooks! The yogurt makes it really creamy. 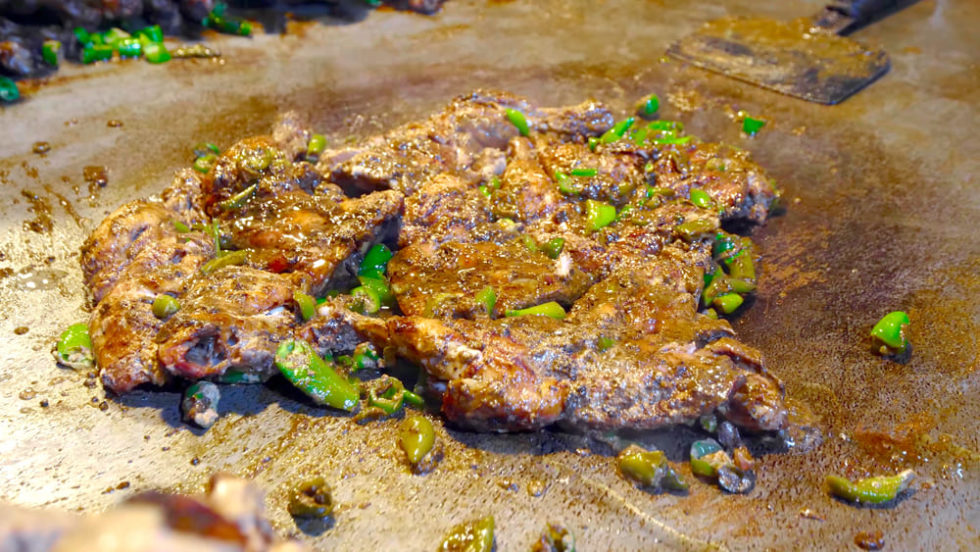 The vendor was super nice and even let me try my hand at helping him make the tawa chicken! I added some yogurt and flipped it around for a bit, but then it was time to eat! 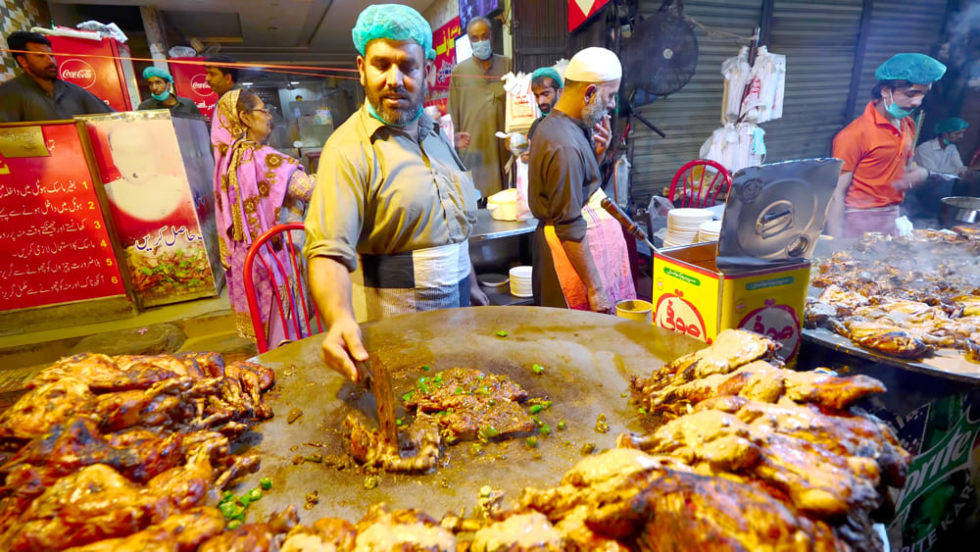 We ate right in front of the vendor as he cooked. The chicken tawa with some chapati was the most unique chicken dish I’ve ever had! It’s one of my top 3 chicken dishes ever! 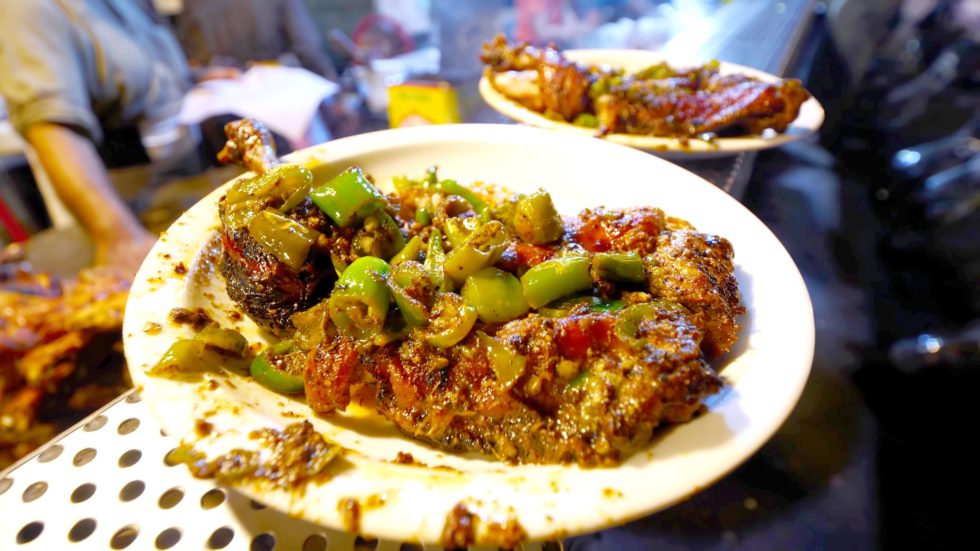 It was juicy, spicy, creamy, and a little crispy because it’s grilled. It had the smoothness of the yogurt, the ghee flavor, and the delicious taste of the masalas.

The drumstick and the breast were unbelievable. Even though it was loaded with chilies, it actually wasn’t too hot. I could see why this Pakistani street food, tawa chicken, is such an iconic dish in Lahore! 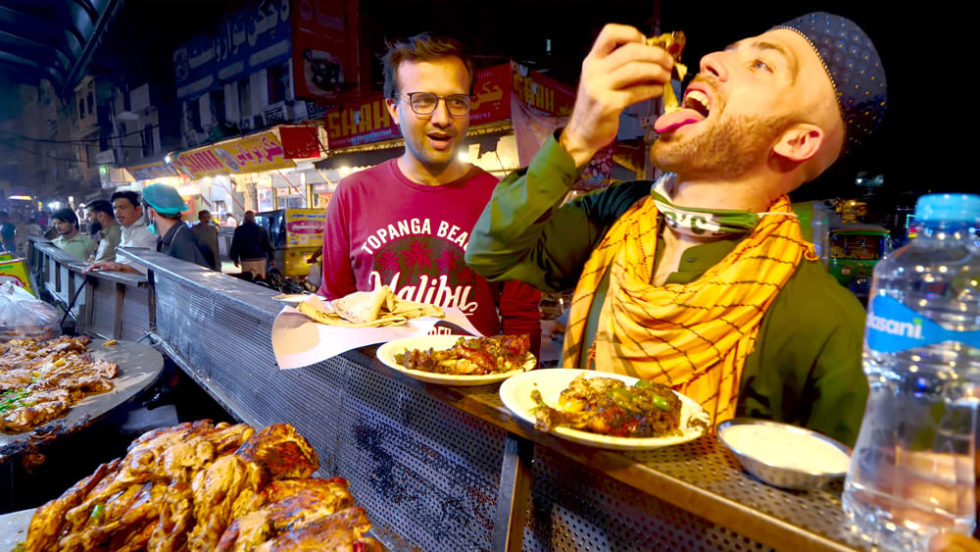 I hope you liked coming with me to have Pakistani street food, including the legendary tawa chicken, in Lahore, Pakistan! If you did, please give this video a thumbs up and leave a comment below. Also, please subscribe to my YouTube channel and click the notification bell so you don’t miss any of my travel/food adventures around the world!