As my whirlwind food and travel adventures continued in Lahore, Pakistan, I set out to get some food and attend a very famous and special international ceremony. Join me as I try some delicious Lahore street food, including beef naan and qatlama, and attend the Wagah Border Ceremony in Pakistan!

My friends Rashid and Adeel from Manaky and I started at Five Star Nan Shop, a spot in Lahore that’s famous for its mouthwatering and unique naan. 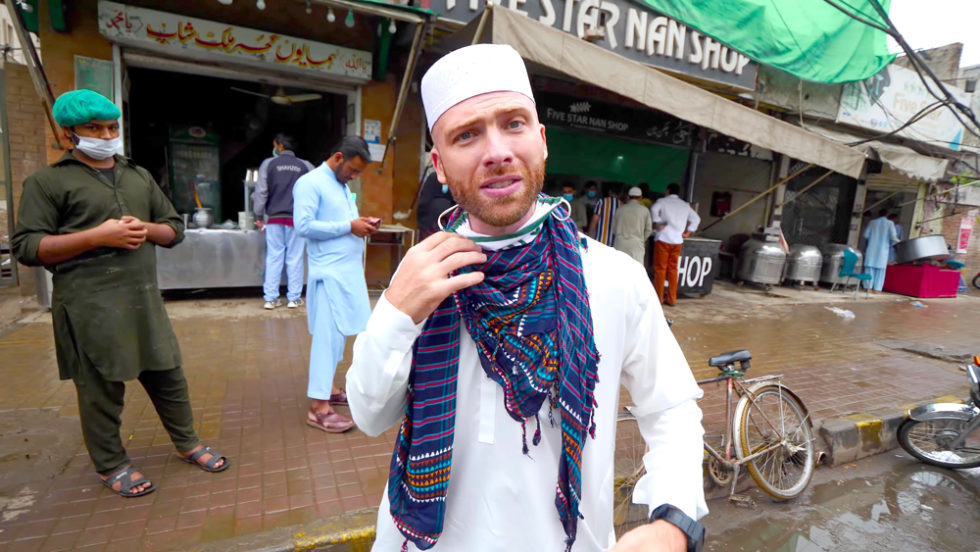 They have two large tandoors and roughly 25 employees who roll out, stuff, and cook the different types of naan. They sell eight different styles of naan, including stuffed naan and one that even contains beef mixed in with the dough! 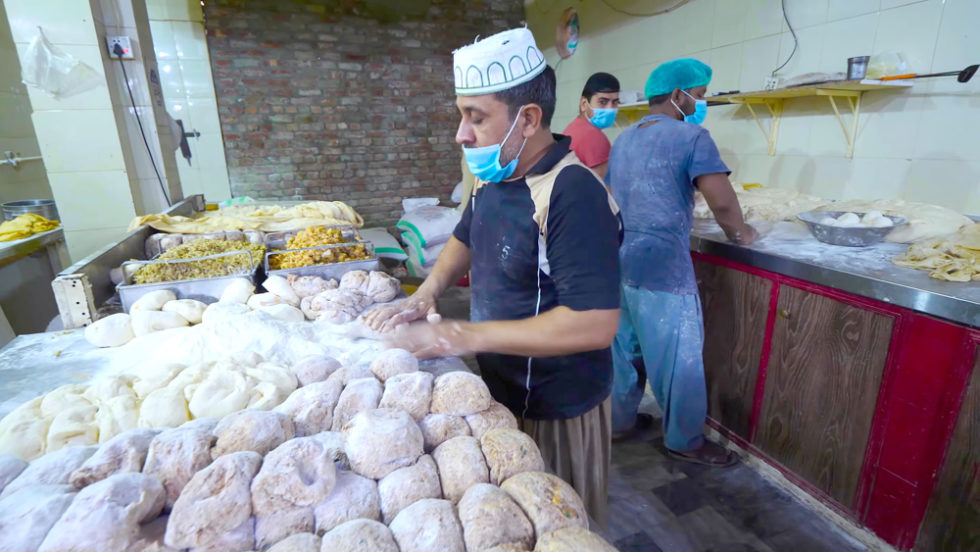 Just before they are served, they brush them with a clarified butter called ghee. It’s fatty, but it is actually said to have lots of health benefits and is good for your digestive system! 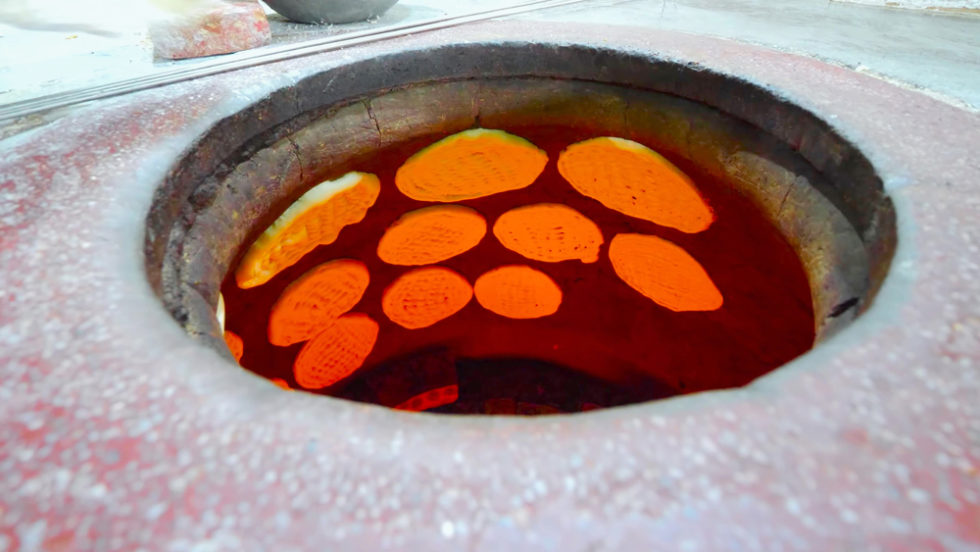 We got beef naan, cheese naan, chicken naan, potato naan, and gram flour naan! They came with a very herbal-looking raita with a greenish tint to it. I couldn’t wait to dive in! 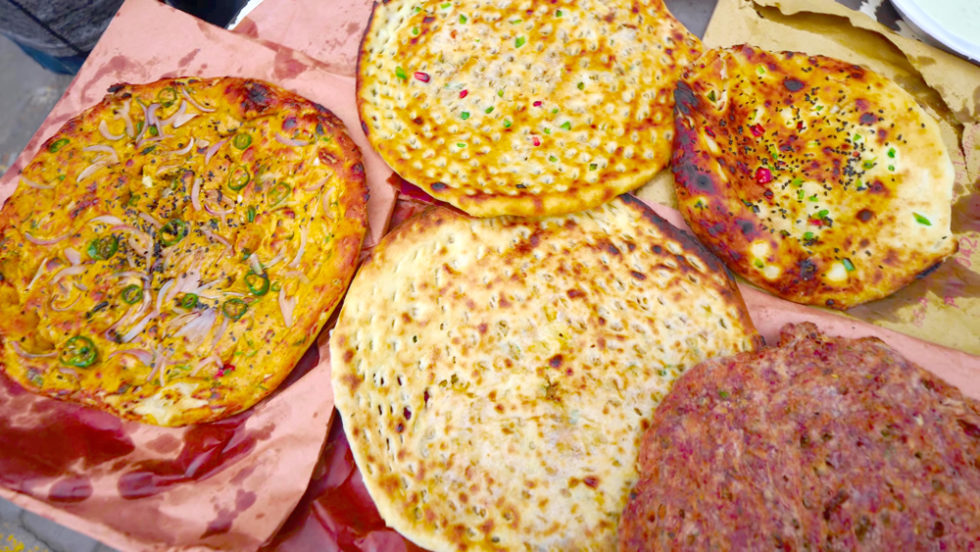 I started with the beef naan and dipped it into the raita. The beef naan was delicious! It reminded me of a beef pizza with egg. I loved how crispy it was. And while it had some flavor and a tiny kick to it, it wasn’t very spicy. 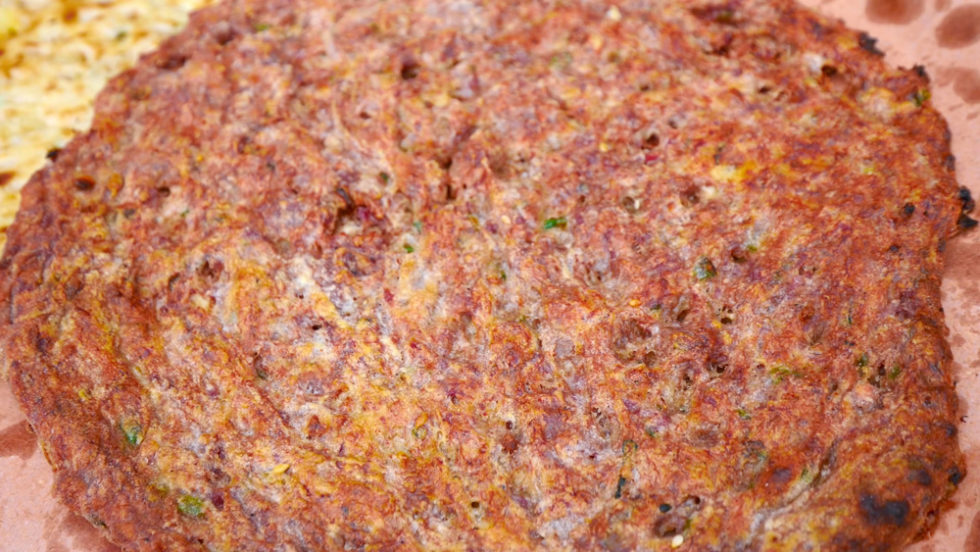 Next was the gram flour naan, which looked and tasted like a delicious pizza. Then, I went for the soft potato naan, which was slightly charred on the outside. There was a bit of spice, but not too much.

I couldn’t believe how delicious it was! Adeel had told me how amazing it was and he wasn’t lying! 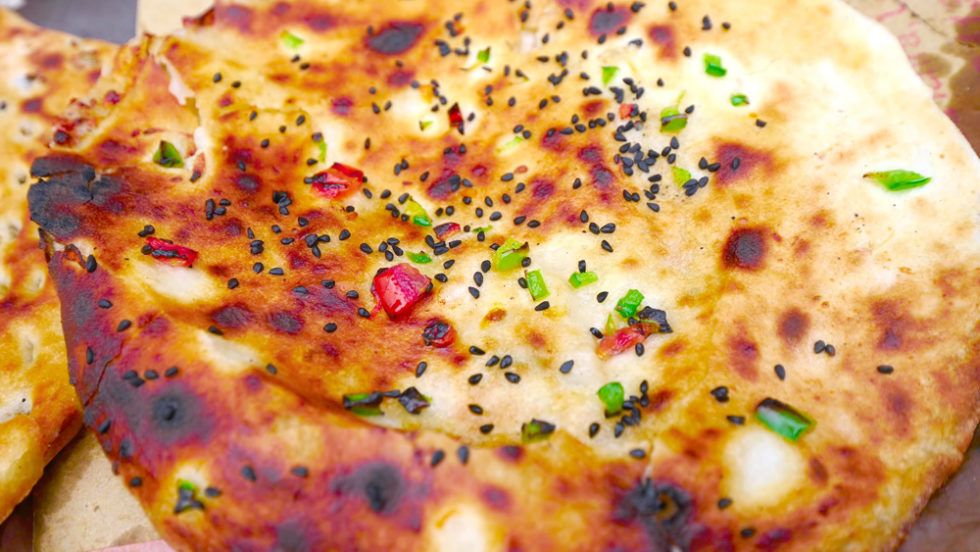 The cheese naan was even more like a pizza than the others! I really enjoyed it a lot. It was super cheesy and again, a little spicy. 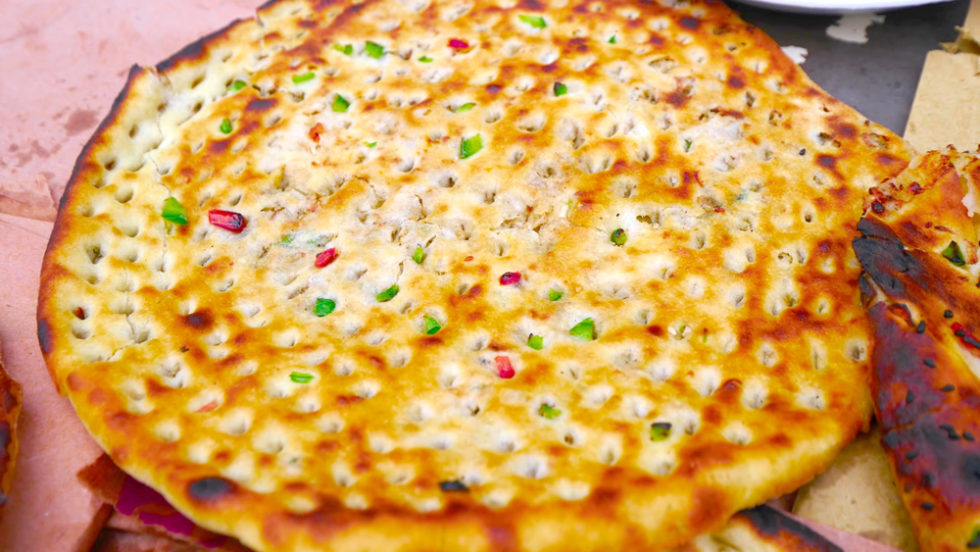 The chicken naan contained a nice amount of shredded chicken, which added a hearty texture. All of these stuffed naans were like smoky pizzas! 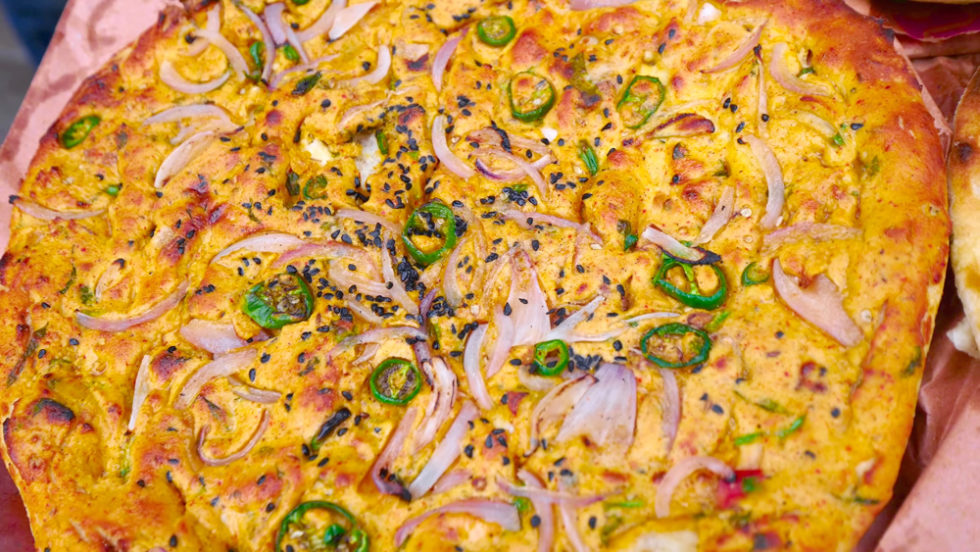 Best of all, these naans are basically an entire meal. One feeds one person! It’s the best naan in all of Pakistan! 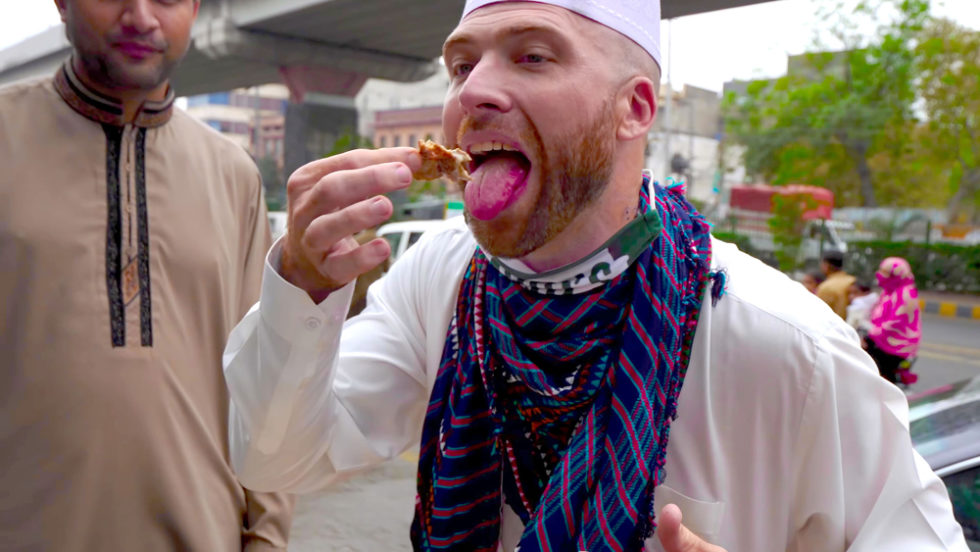 After eating our street food, we had a 30-minute drive ahead of us to get to the Wagah border outside of Lahore for the famous Lowering of the Flags Ceremony. Even though it was raining and COVID times, I wanted to get a Pakistan flag at the ceremony. 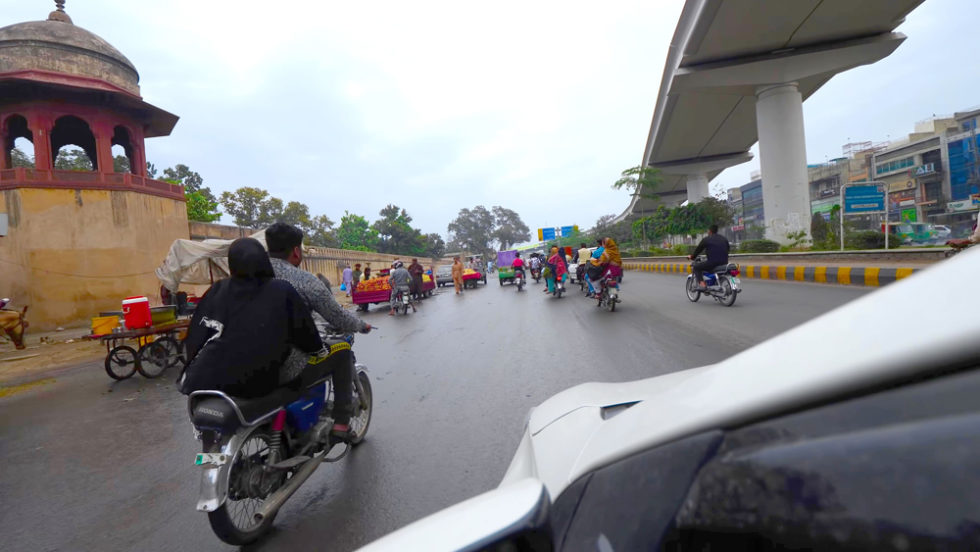 We’d be getting there early to make sure we got in, as they were limiting the number of people who can be in the stadium at one time. Fifteen minutes from the border, we stopped at a street food vendor in front of Shalimar Gardens, a UNESCO World Heritage Site in town. 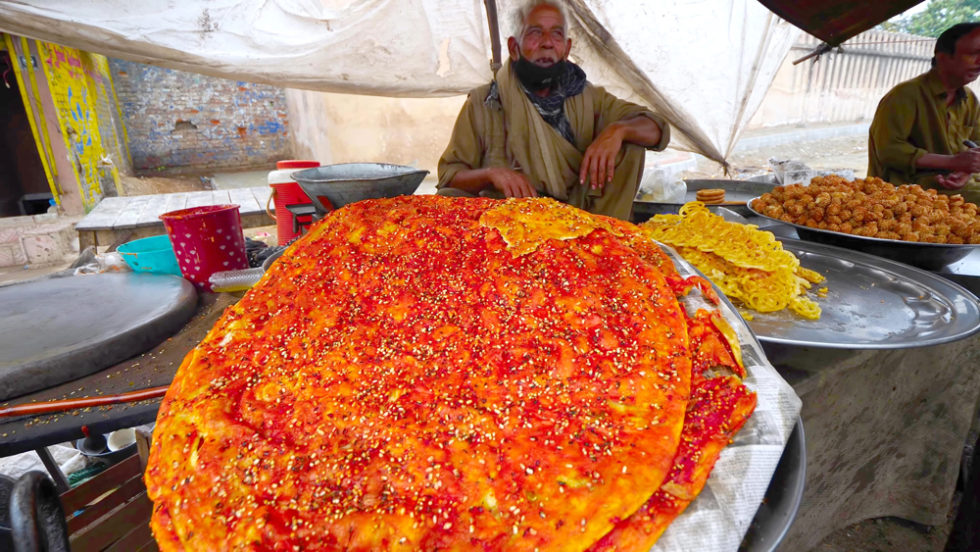 The vendor sold a dish called qatlama, which is almost like a deep-fried pizza that’s covered in masalas. He also sold jalebi and there were fruit vendors nearby.

The qatmala was essentially an oily fried dough. It had a spongy consistency but was full of flavor. It was pretty damn good, but I preferred the naan from earlier! 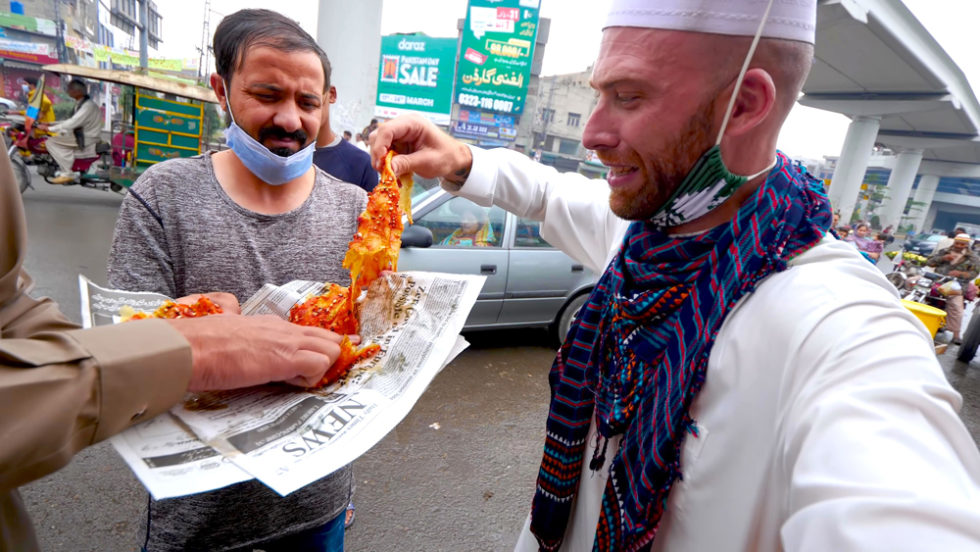 Then, I tried a sweet pakora, which was crunchy on the outside, soft on the inside, and covered in sesame seeds. Then, we stopped at a street vendor for some doodh patti, which is chai made with only milk. 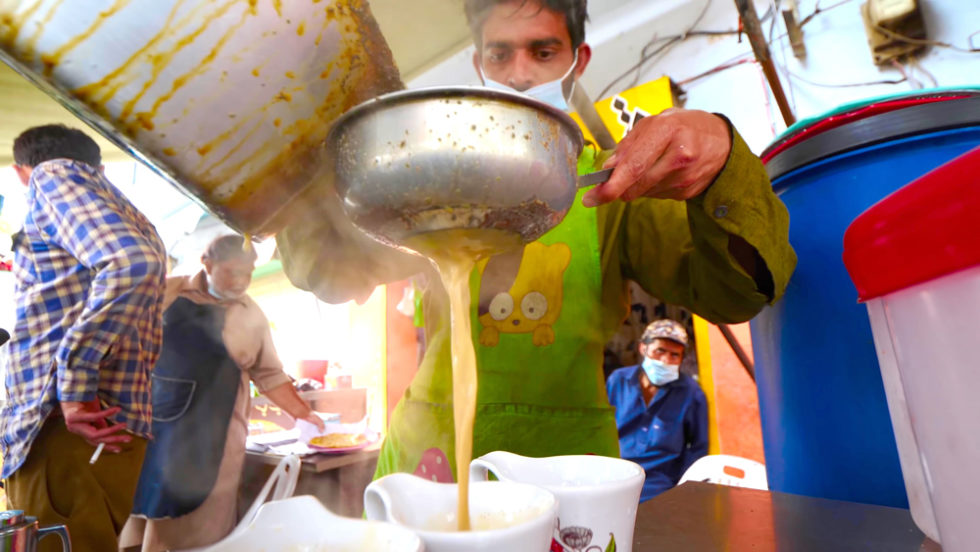 Next, we drove past a farming community and made it through five checkpoints to get to the Wagah border. Thanks to Manaky, we had VIP parking! 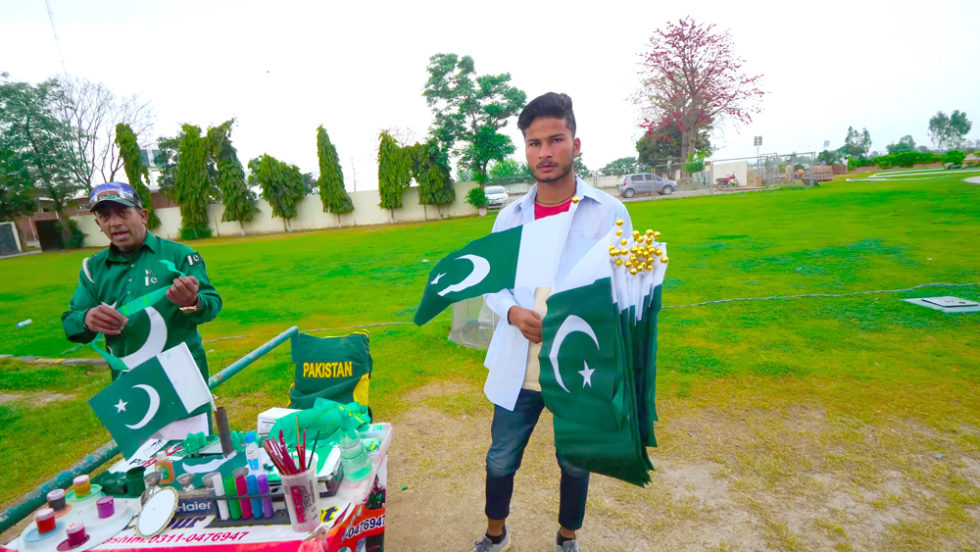 Inside, I bought my flag and the kind vendor gave me an armband. My friends also got the Pakistan colors painted on their face. We entered the stadium, where, because of COVID, everyone was spread out. I noticed that the Indian side of the stadium was completely empty. 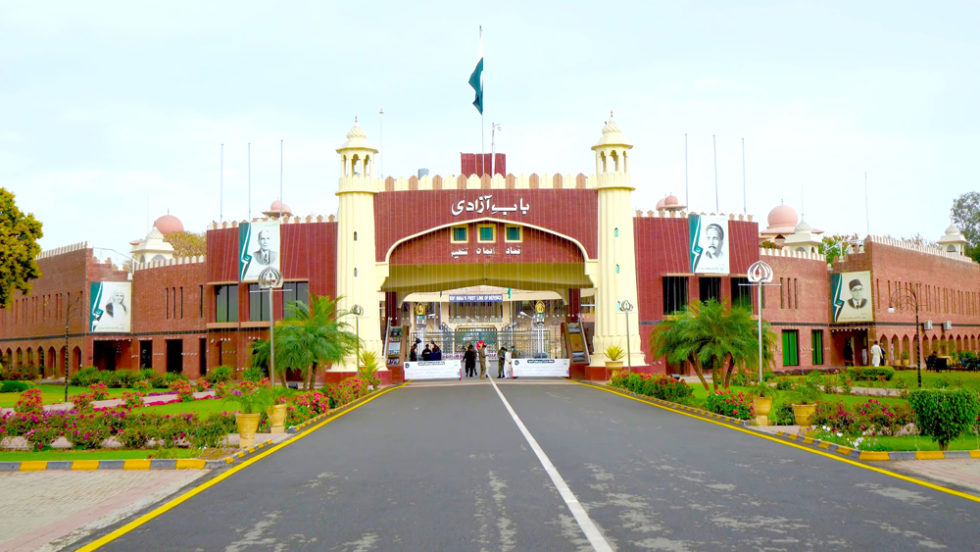 I had seen this ceremony from the Indian side back in November of 2018 but it’s still a thrilling thing to witness. The men marching, high-kicking, and dancing are so much fun to watch!

At the end of the ceremony, they lower the flags of both countries. Afterward, we got access to the front line! What an awesome experience! 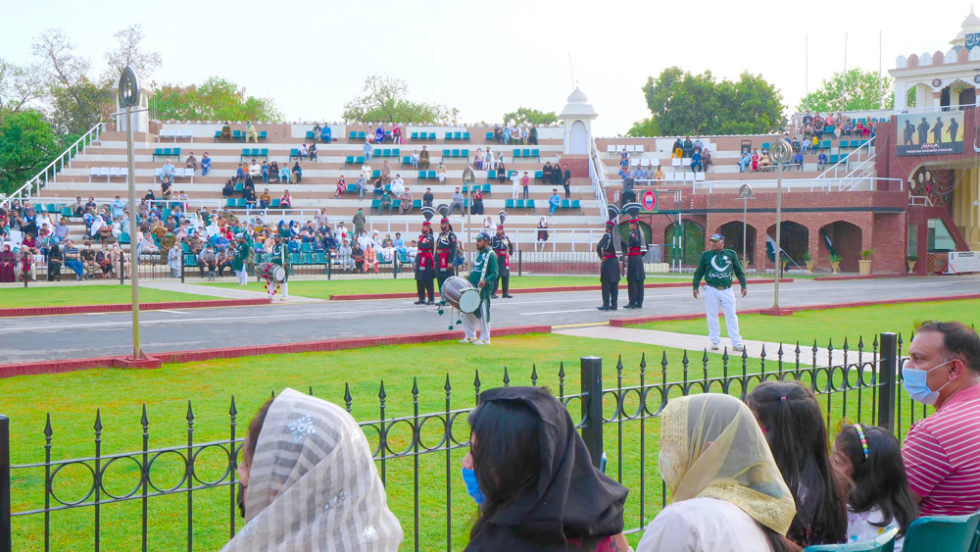 I hope you liked coming with me to check out the Lahore street food and the Wagah Border Ceremony in Lahore, Pakistan! If you did, please give this video a thumbs up and leave a comment below. Also, please subscribe to my YouTube channel and click the notification bell so you don’t miss any of my travel/food adventures around the world!