Named a World Heritage City in 1986, Évora, Portugal stands as a blend of various cultures, empires and architecture. It dates back more than two millennia, and has been occupied by the Romans, Moors and Celts, among other peoples. 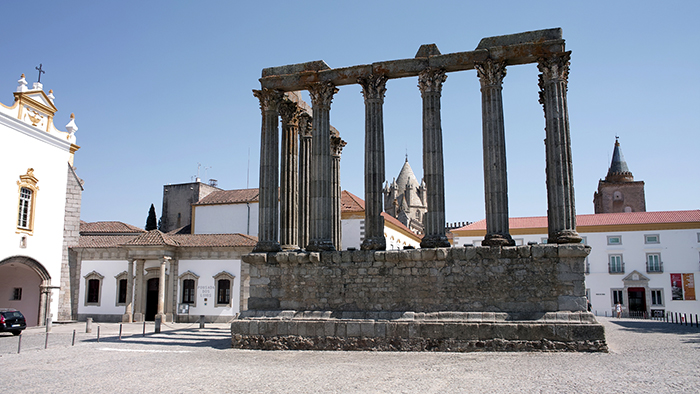 Évora is located south of the Tagus River in the south-central Alentejo Province of Portugal, which is known for its wide plains. Évora lies about 70 miles east of Lisboa, making for a relatively short drive to the capital city. Within Évora’s walls lie an endless array of temples, cathedrals, museums and ruins that will have even non-history buffs amazed.

Some sites include the Temple of Diana, the Silver Water Roman Aqueduct and the Chapel of Bones inside the Saint Francisco Church. The city’s structures represent the golden age of Portugal, which began after the Lisbon earthquake of 1755. 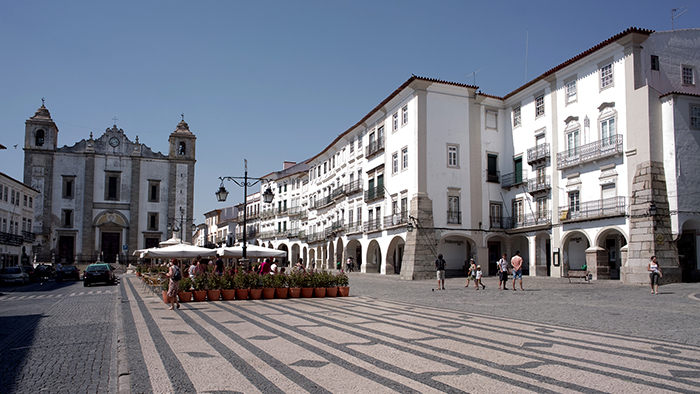 The city of Évora was also an important site of education when the Jesuits founded the University of Évora in 1559. It is the second oldest university in Portugal, and a popular tourist destination. In Évora, travellers step inside a snapshot of different centuries and cultures. But history isn’t the only charm that brings visitors from all over the world to Évora. The delectable cuisine available at traditional restaurants transports diners to another century (in a good way). The warm and welcoming people you will encounter in Évora want to share with you not only their antique architecture, but also their ways of life. Preservation is key to Évora’s charm since the city prides itself in maintaining its tradition and rich history. Here are our Top 10 things to see and do in Evora! 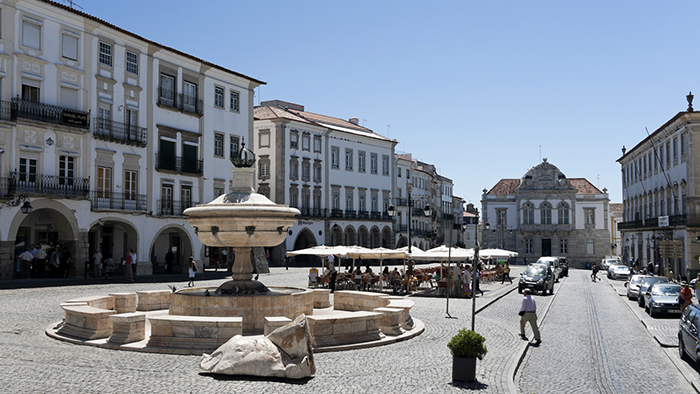 Praça do Giraldo, or Giraldo Square, is considered the center of Évora. From here it is only a five-minute walk up the hill to the Temple of Diana and the Évora Cathedral. King Duarte erected the Estaus Palace that still stands in the square today in all its gothic glory. Visitors can also stop by the Renaissance fountain that dates back to the year 1570. 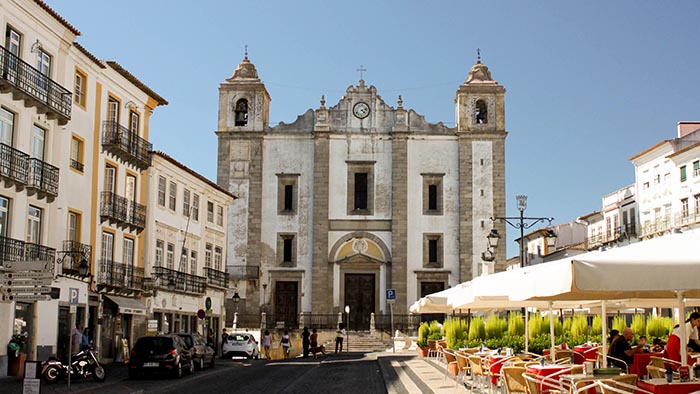 Saint Anton’s Church, built in the 18th century, stands on the north side of the square. The antependium of the altar inside the church features a valuable 13th century Roman-Gothic bas-relief. One intriguing fact about Giraldo Square is that Fernando II, Duke of Bragança, was decapitated on site in 1483 as his brother-in-law King John II watched on. Giraldo Square also witnessed thousands of autos-da-fe (public condemnations and punishments) during the Spanish Inquisition. 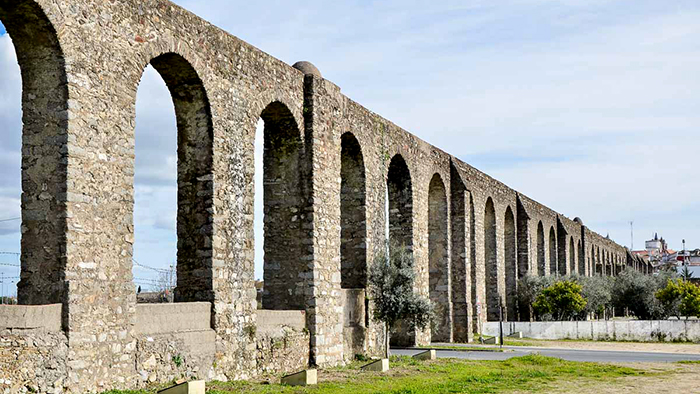 Outside of Évora’s protective walls, you will find the famous Silver Water Roman Aqueduct. King João III commissioned the project and construction was completed in 1537. It was used to supply Évora with water and was the design of Francisco de Arruda, who also designed the Belém Tower in Lisbon. This aqueduct is a testament to Roman-inspired construction.

Check out 15 Things You Must Do in Lisbon 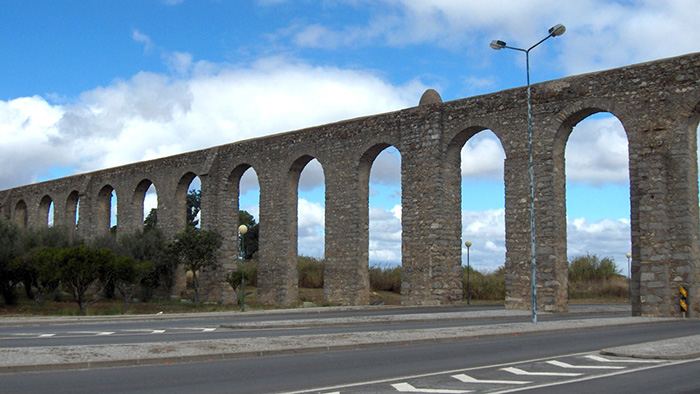 Visitors can reach the aqueduct by heading west from Giraldo Square and onto the Rua do Cano. At that point, the houses and shops built into the arches become visible. The view of these makes for great photo opportunities because their location on the aqueduct is so unexpected. This is an impressive example that demonstrates how the people of Évora have literally adapted and built around the ancient structures that have stood for thousands of years. 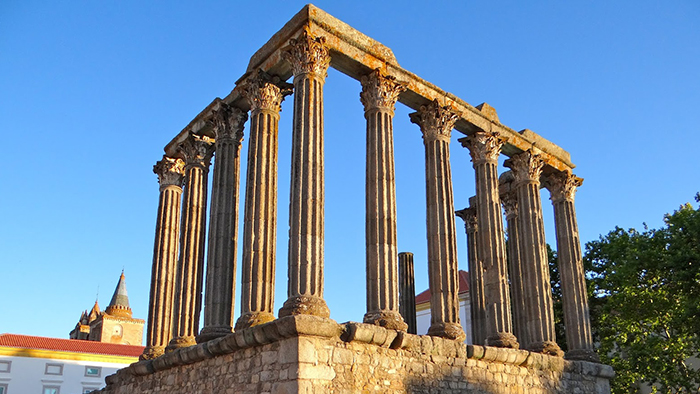 The Roman Temple of Diana is located in Évora’s historical city center. Diana was the ancient Roman goddess of the moon, and although the name of this temple alludes to the idea that it was named after her, historians have reason to believe that this structure was most likely dedicated to the cult of Emperor Augustus. 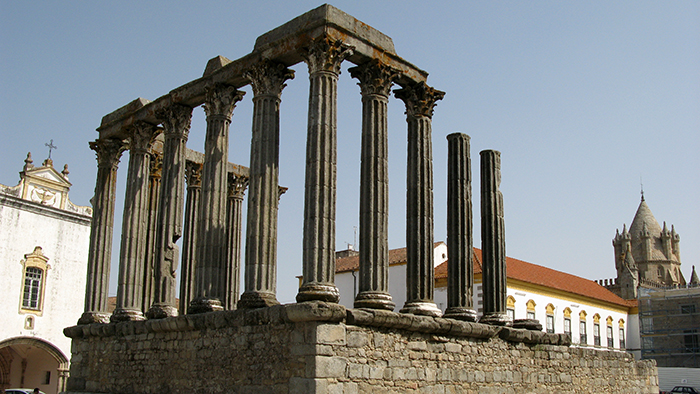 The temple was built in the 2nd century and would have been one of many Roman temples in the city. The temple was partially destroyed by Germanic invaders in the 5th century, and by the 1755 Lisbon Earthquake. Presently, the temple represents one of Évora’s most famous historical attractions with its six columns in front and fourteen granite columns remaining, along with the ten-foot high stone platform. Unfortunately, the temple is not in great condition, but its columns still stand proud as a testament to Roman grandeur. The temple is a UNESCO World Heritage Site. Admission is free. 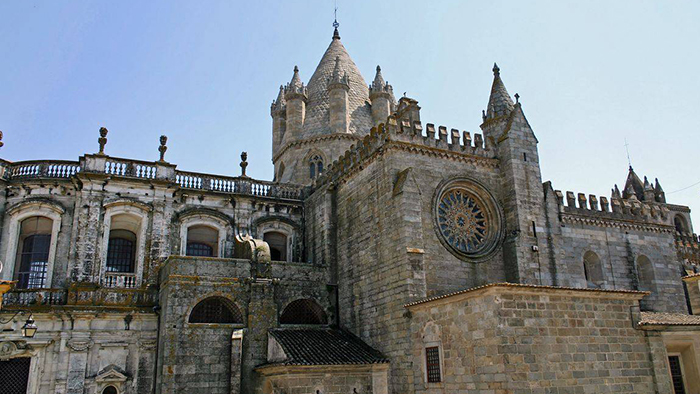 The Évora Cathedral sits in the center of the city and is located on the highest point in Évora, offering a prime view from its apex. I climbed its tallest tower and experienced an expansive view of Évora below me. Visitors can walk along the roof and take in the beautiful surrounding landscape of terracotta rooftops and blue skies. The front of the cathedral is made of granite and closely resembles the Lisbon Cathedral. 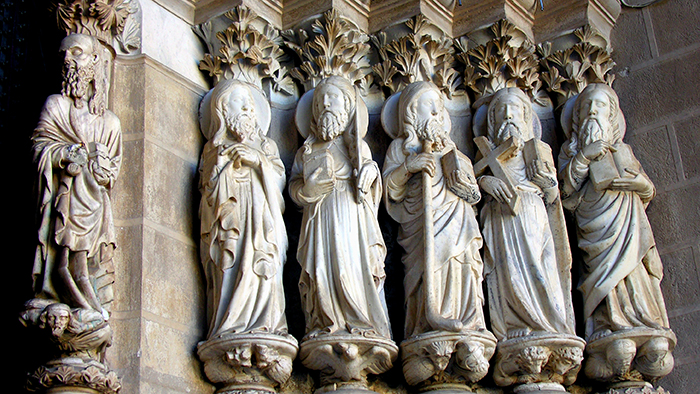 After Christians regained control of the city from Arabs in 1166, construction began on the cathedral less than 20 years later as a dedication to the Virgin Mary. The structure was changed, added to, and fortified throughout the years. The interior contains a 15th century statue of the pregnant Virgin Mary known as The Lady of Mothers. The cathedral also features an on-site museum and treasury with exhibits of precious stones and a portion of wood said to be from the cross used to crucify Jesus Christ. Admission to the museum is €3.50. The Évora Cathedral is one of the largest medieval cathedrals in Portugal and remains a significant Gothic structure in south-central Portugal. Admission is €2.

Check out What to See and Do in Braga 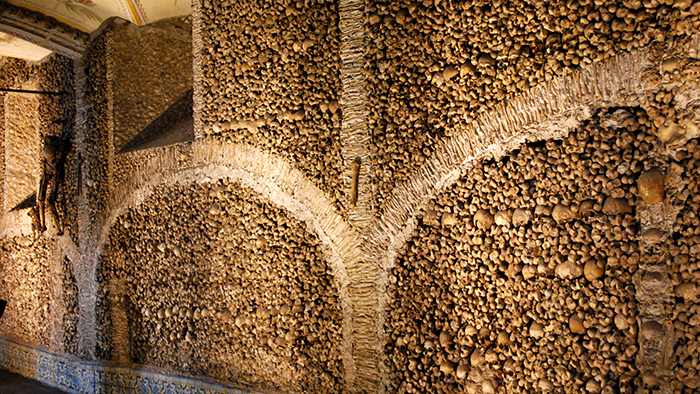 Chapel of Bones, or the Royal Church of St. Francis to be precise, is best known for what it contains – walls and pillars covered in human skulls and bones. This place wasn’t always so morbid. It was built in Gothic style and completed in 1510. When the Franciscan monks had no place else to bury their own, bones were transferred from nearby cemeteries to Capela dos Ossos. 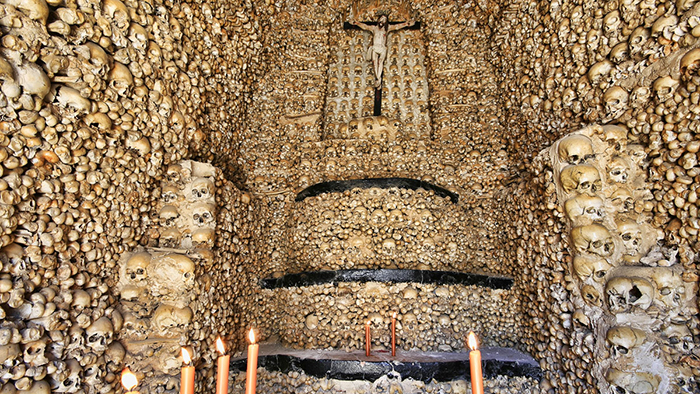 There is an eerie corpse figure that looks like the remnants of a human child off to one side of the chapel. A foreboding sign reads, “Nós ossos que aqui estamos, pelos vossos esperamos,” meaning “We bones that are here, await yours.” There is an estimated 5,000 skeletons in the chapel. Skulls and other bones are cemented onto the chapel walls and pillars, which make this chapel unsuitable for the faint of heart. Not everyone can stomach the scene, but one thing is certain; Capela dos Ossos is a rare and unforgettable sight. The chapel is open everyday until 5:45 pm. Admission is €2.

The Ancient Wall of Évora 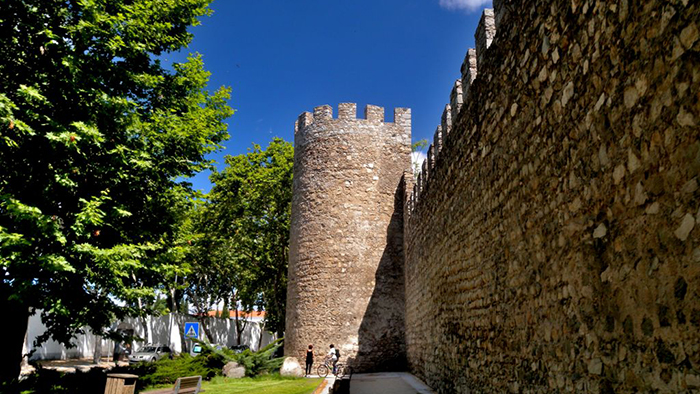 The old city of Évora is completely surrounded by medieval walls. This is one of its unique characteristics that set this museum-city apart from others. These 14th century walls are some of the best preserved in all of Portugal and one of my favorite features of historic Évora. One can see them by simply walking around the old city. 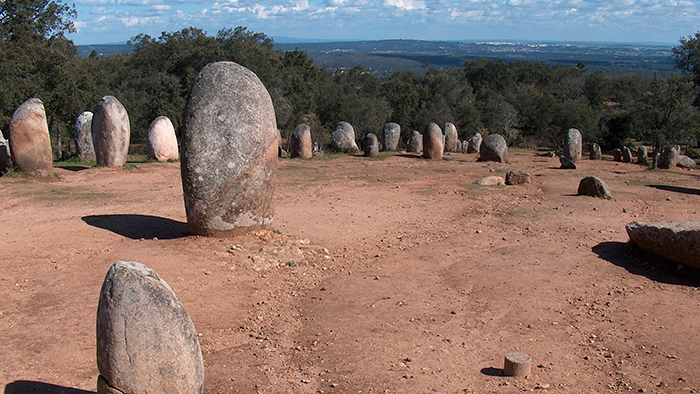 Composed of about 95 engraved elliptical stones, and built in the late Neolithic Period (circa 4500 B.C.,) Almendres Cromlech (Cromeleque dos Almendres) is believed to be older than Stonehenge in England. The Almendres Cromlech site can be found just west of Évora near Guadalupe. Like other megalithic structures, Alemendres Cromlech was originally built in a horseshoe pattern with an opening towards the east. 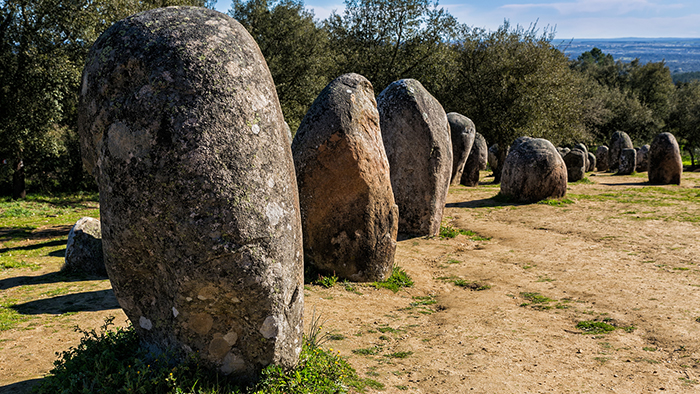 Its precise function is unknown, but historians believe it to have been an ancient place of worship of the sun. This is because some of the stones’ positions are related to the cycles of the planets. This sacred site is an impressive testament to early European civilization and gives ambiguous, but fascinating insight into the early religious life of Europe’s farming communities. It cannot be missed! Almendres Cromlech is located 3 miles (4 km) west of Évora along the N114 Highway, just past Guadalupe. The best time to visit is spring while the weather is pleasant and the wildflowers are in full bloom. Admission is free. 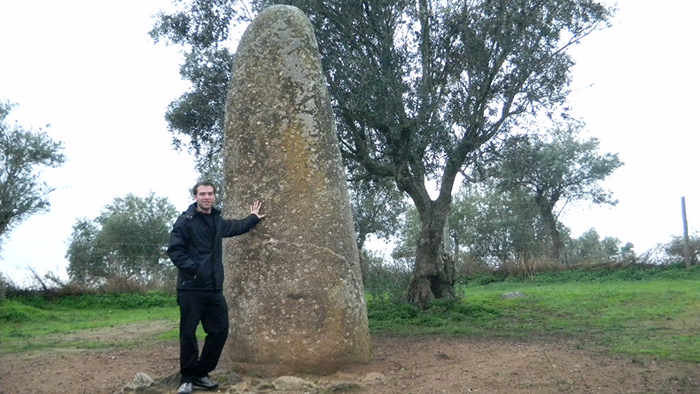 The Almendres Menhir is a four-meter high megalithic structure from the late Neolithic Period. Its significance is unknown, but archeologists are certain that its position is directly related to the nearby larger Almendres Cromlech megalithic structure. Visitors should take the time to see this single 6,000-year-old stone, and take pictures after exploring the larger site of Cromlech. The Almendres Menhir is located about a half-mile walk from the Almendres Cromlech site. 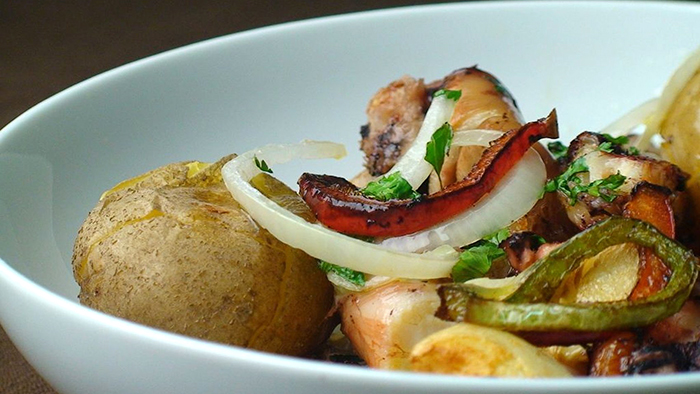 Upon entering this award-winning establishment, diners will feel the welcoming atmosphere of a restaurant that prides itself on great food quality. B.L. Lounge is mentioned in several culinary websites including Michelin Restaurants U.K. Antonio Bravo, owner of B.L. Lounge, also manages the operations. His wife, Lucia, is also owner and head chef. One thing that sets this family establishment apart is its incredible, unforgettable chocolate cake. Lucia credits her notorious chocolate cake recipe to six months of dedication and trial and error, which finally resulted in the perfect recipe for all of the restaurant’s patrons to enjoy. 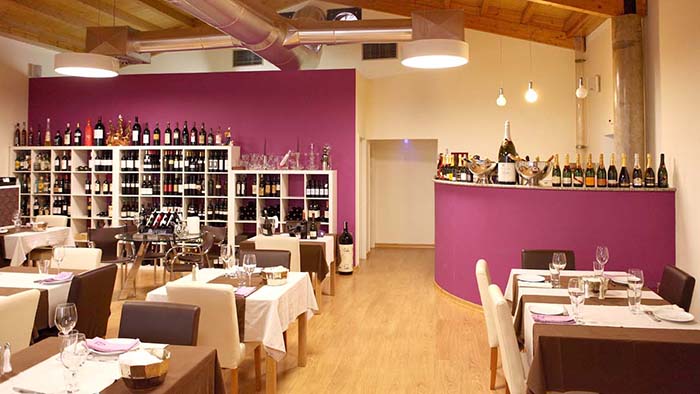 This is just one example of the commitment B.L. Lounge puts forth to ensure all the food is fresh and cooked to perfection. This husband and wife duo serve up some of the best food in the center of Évora, just two blocks from the Temple of Diana. I tried the Al-Xam champagne and Casa de Zagalos red wine. I also had a brandy made by Antonio himself, served to me right out of an oak barrel. B.L. Lounge will leave you and your stomach smiling (yes, it’s possible so try the chocolate cake and tell Lucia I told you so!) 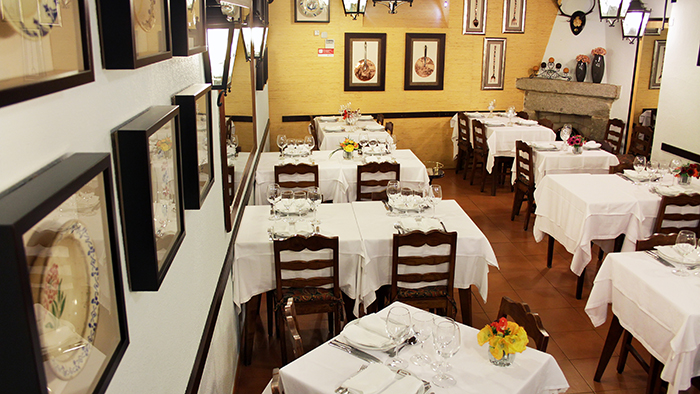 When you mention the city of Évora to people from Lisbon, it may take time for them to realize the exact place you are referring to. But if you mention the award-winning Fialho restaurant, they will catch your drift a little faster. It is one of the oldest and best-known restaurants in the region that serves up typical Portuguese cuisine. Manuel Fialho founded it as a chophouse in 1948. 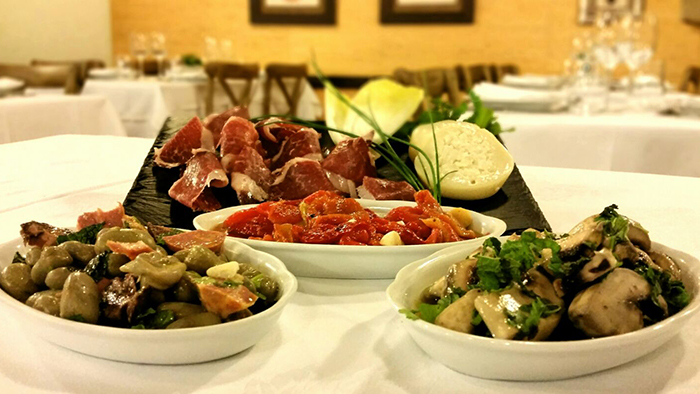 Today, it is still a family affair with Manuel’s children, Amor, Gabriel and Manual, running their father’s labor of love. In the beginning, Fialho sold snacks and wine, but eventually it evolved into the iconic place it is today. They serve very traditional Alentejo cuisine, making it one of the best in the city. My favorite dish of the house was the black pork with asparagus. I was amazed at its tenderness, and how they managed to incorporate the asparagus where I least expected it.

We recommend you go for lunch and try the fish cilantro, black pork with asparagus, partridge and roast lamb

Have you been to Evora? What did you think of the top 10 things to see and do in Evora? Leave a comment below!