Halfway between Lisbon and Porto lies the picturesque town of Leiria, filled with cobbled streets, terra cotta rooftops and friendly people. Overlooking the city from a nearby hilltop is the beautiful Leiria Castle. Leiria is an easily accessible destination. The closest airports are the Portela Airport in Lisbon and Sá Carneiro in Porto. For those in Lisbon, there are also several daily trains and buses that travel from the capital to Leiria. 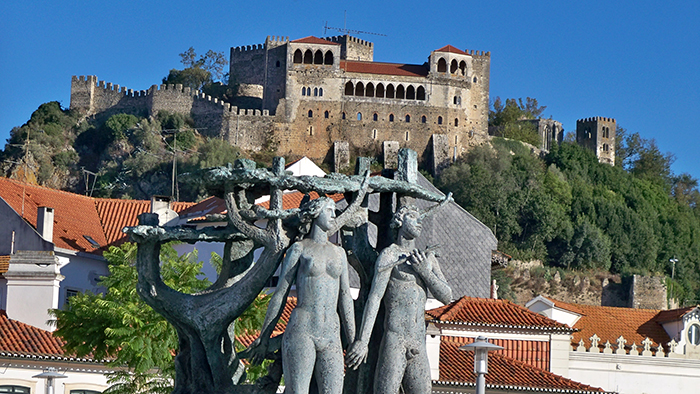 The city is located in the Centro region of Portugal near the River Lis and the Atlantic Ocean, making it a great beach getaway. In the spring and summer, the city is known for its hot and sunny weather, while in the winter, temperatures usually stay above 40° F (4° C). 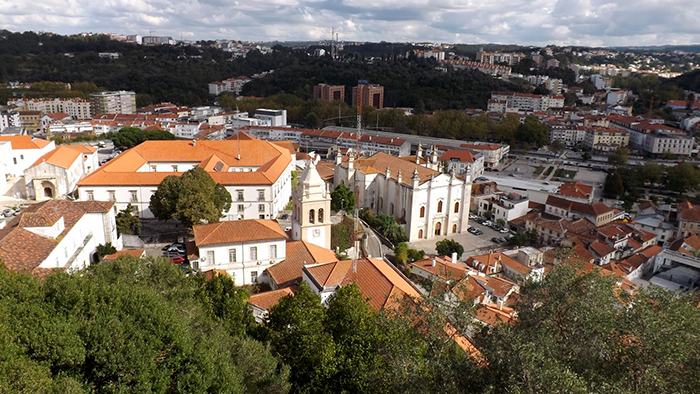 Leiria was first inhabited by the indigenous Turduli people and later by the Romans. In 1135, the city was captured by Afonso Henriques, the first king of Portugal. King Afonso built Leiria Castle, now the symbol of the town. Later, in the 15th century, King João I transformed the castle into a residence for the royal palace.

Check out Things You Must See and Do in Porto 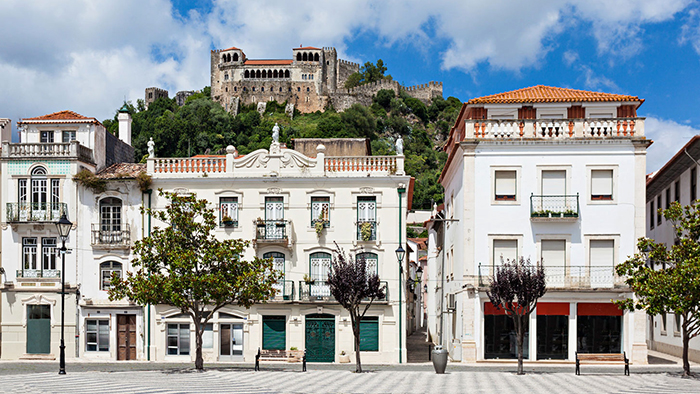 In the center of the city, you will find numerous shops and artisans selling Leiria’s unique glass items. The glasswork has been a staple of the town for centuries. Shops featuring other local crafts, restaurants and the town’s nightlife center around the Candido dos Reis Square. Be sure to sample the local favorite bolo de pinhão, a cake made with pine nuts. 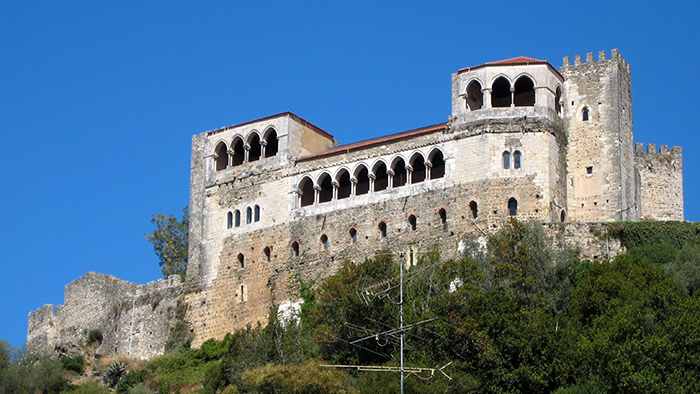 Founded by D. Afonso Henriques in 1135, Leiria’s castelo is the main attraction of the town and has been listed as a national monument since 1910. Since Leiria was a vital defensive city in the 12th century during the time of the Portuguese monarchy, the castle was built to guard against Moorish attacks. It has since been rebuilt and renovated several times throughout its history. In the 14th century, King Denis restored the castelo’s keep during his reign while King João I (John I) added the gothic features that visitors see today. 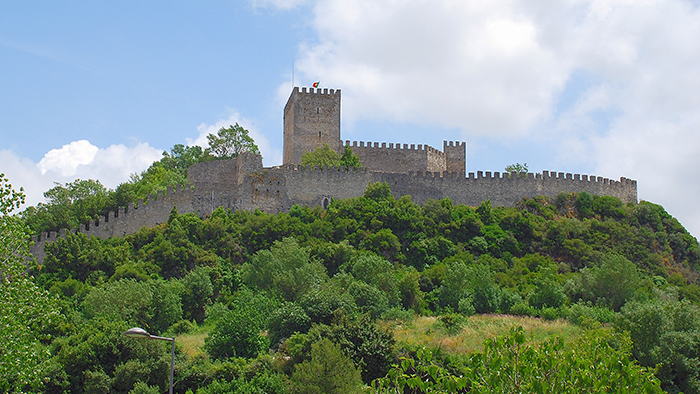 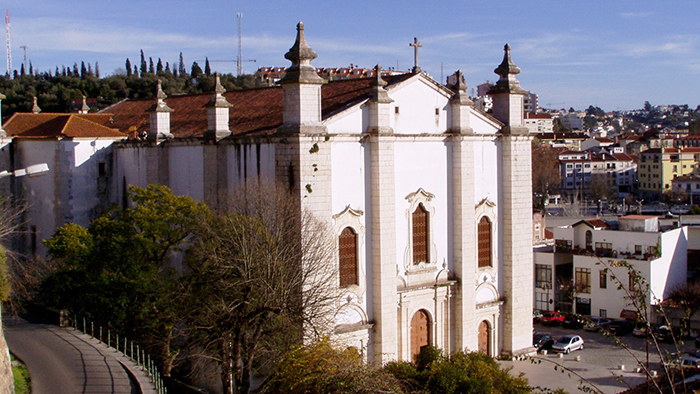 The Leiria Cathedral is located in Rodriguese Lobo Square in the town’s center. Construction of this cathedral began in 1546 under architect Alfonso Álvares. Originally built in Mannerist-style, the Leiria Cathedral has since been through many changes. In the early 17th century, the cloister, sacristy and chapter houses were added and after the 1755 earthquake, the façade of the cathedral was drastically changed. 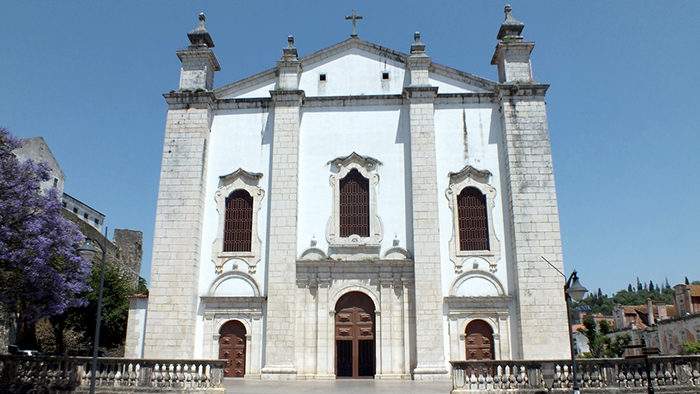 Currently, only three of the original doors remain and it is known for its simple exterior and interior. Guests can still see some interesting 17th century artwork depicting the life of the Virgin Mary around the altar, which was done by Simão Rodrigues. Across from the cathedral is Pharmacy Leonardo Paiva where you will find azulejos, hand-painted tiles depicting Greek scholars and philosophers.

The Church of Saint Peter 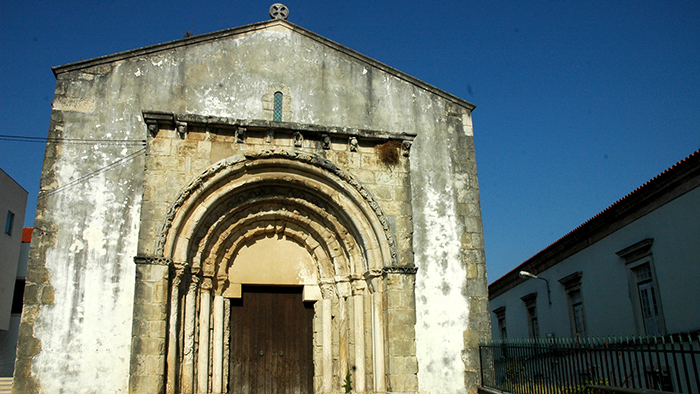 Until 1574, this was one of only two churches in Leiria. Originally constructed at the end of the 12th century and expanded in the 14th century, this small Romanic church features impressive baroque windows and three altars. Located near Leiria castle, it was built to serve the parish located outside of the castle walls. After 1834, it was used as a theater and as a warehouse. It was established as a national monument in 1896 and restoration work began in the 1930s. 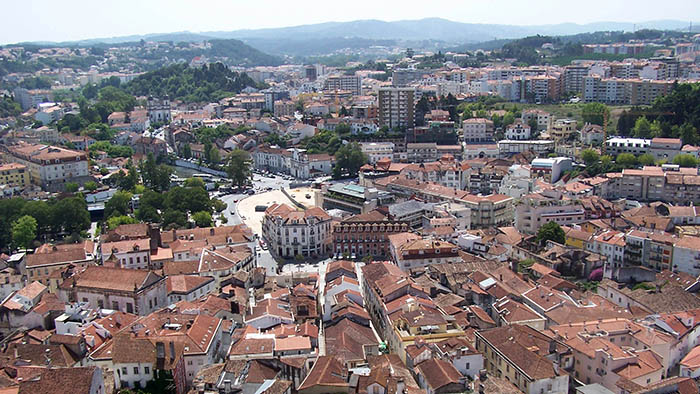 One of the most charming aspects of Leiria is its collection of ancient streets and alleys where visitors can stroll alongside antique houses, medieval stone works and traditional balconies. In the historical center, guests can enjoy a mix of small coffee shops, grocery stands and craft merchants. Other local marvels include the blue and white 19th century tiled arch on Afonso de Albuquerque Street, and the 17th century arches and statue in Rodriguese Lobo Square. 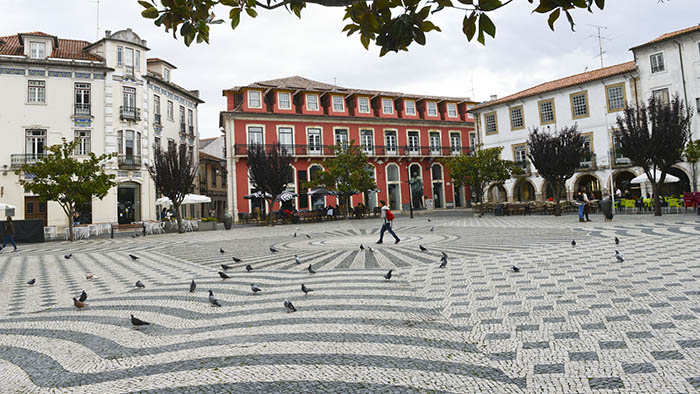 This relaxing square is the perfect place to go and grab a cup of coffee after a long day of sightseeing. Surrounding the square are fine, arcaded buildings with shops and restaurants, one of which, Praça Caffe. This coffee house hosts an amazing bica, or Portuguese espresso. Come sundown, the square comes alive with Leiria’s diverse nightlife. 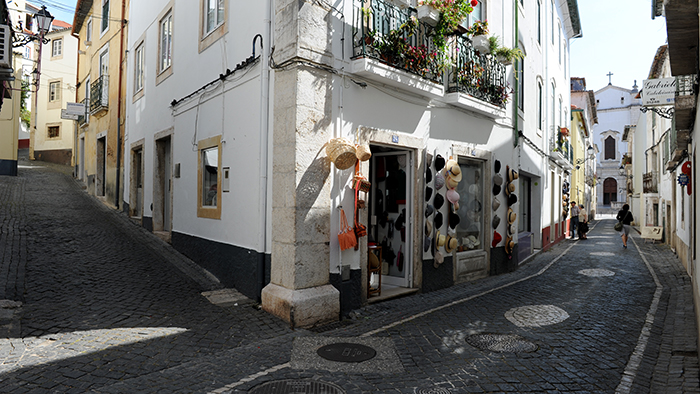 This is the main pedestrian street in the historical center of Leiria. Its popularity has spawned a nursery rhyme that is commonly sung by locals. The name Rua Direita literally means Straight Street, but this crooked avenue winds through the city center and passes numerous shops and restaurants before ending in Praça Rodriguese Lobo. 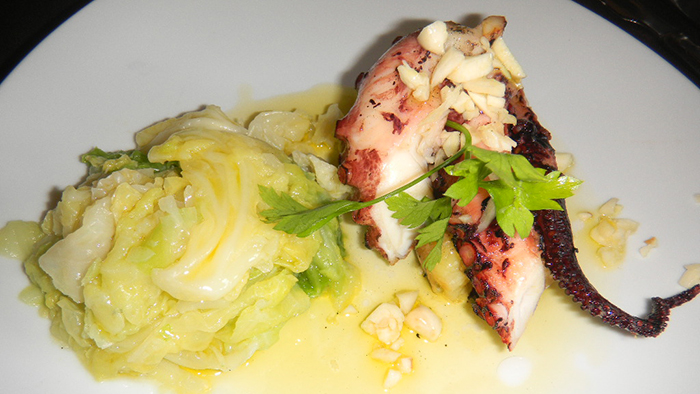 Hidden about eight minutes north of Leiria in the town of Marrazes is O Pipo Velho. This family owned-and-operated restaurant features regional Portuguese cuisine and is a must for any seafood lover. With a name literally meaning “old barrel,” O Pipo Velho exudes a rustic, low-key feel, with wine corks and wooden barrels decorating the interior. This safe bet is worth your time to experience a traditional Portuguese restaurant. O Pipo Velho is open every day of the week except Sunday evenings and Mondays. 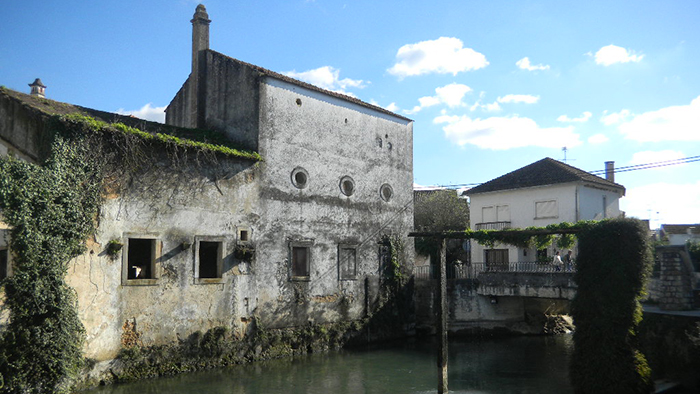 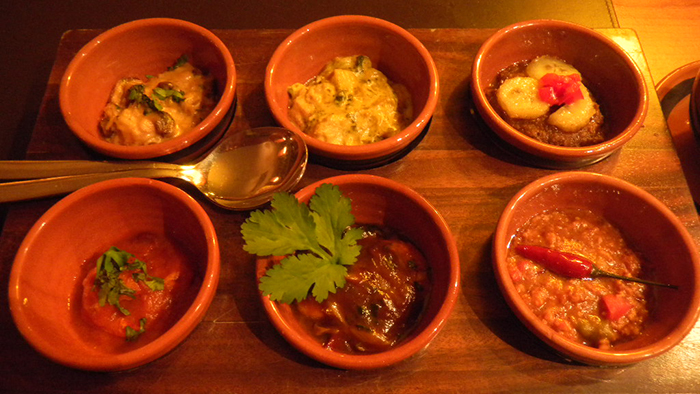 This small and modern restaurant, located in the heart of Leiria, has even been recommended in the Portugal Michelin Guide. With only 35 seats, it received the gold award in 2010 in the Confraria Pinhal do Rei contest. 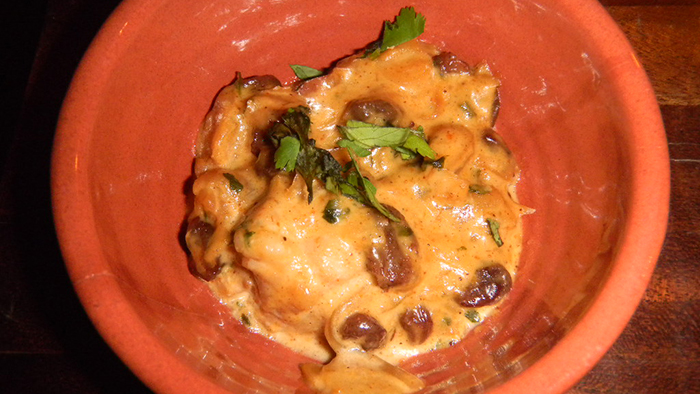 Interestingly, the Malagueta Afrodisiaca focuses on non-traditional Portuguese food, one of the few such restaurants in Leiria. Instead, a fusion of Latin American, Mediterranean, Scandinavian and Asian cuisine is served. Enjoy your meal on their outdoor terrace and you get a magical view of the castle.

Recs: Chili and meat, chicken with korma (a favorite), curry chicken with spinach, tenderloin with chili anxo, prawns with soy sauce and mango, and Mexican prawns.

Malagueta Afrodisiaca is open daily from 7 p.m. to midnight. It is closed Dec. 24 and 25. 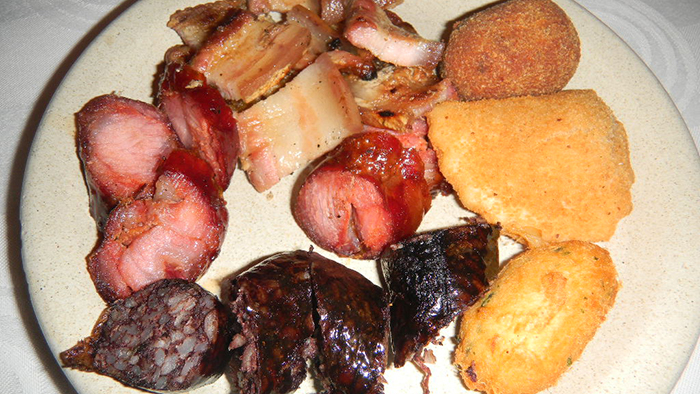 This restaurant is just a short eight-minute ride east of Leiria in the small town of Cortez. Sitting up on a small stream and next to an old wooden water mill, Casa da Nora gives a warm, antique feeling. With lush vegetation covering the outside of the restaurant, patrons feel as they have been transported to a quaint, medieval town and invited to dinner. Once inside, diners will enjoy the stone walls, wooden décor and low ceiling that add to the homey experience. Dining with a view of the Lis River is one of the perks of grabbing a table outside. 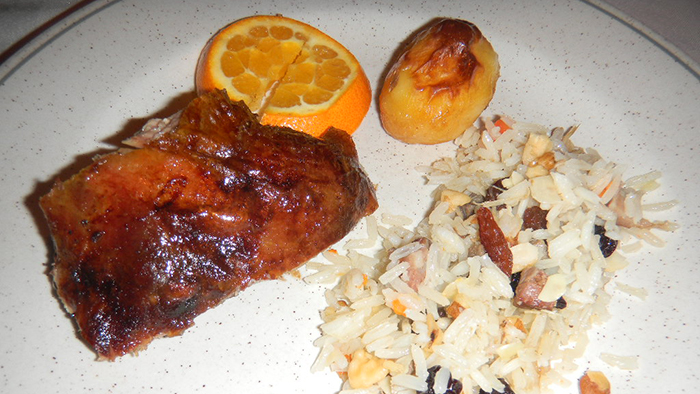 Casa da Nora is famous for its savory grilled octopus and its incredibly friendly staff that complete the old-world experience. 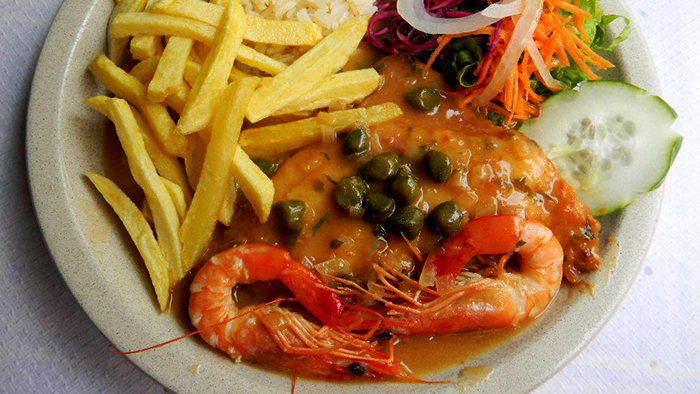 A 20-minute drive south of Leiria will bring you to the town of Nazaré and A Tasquinha. Known by locals for its great seafood, the restaurant is in the city center but walking distance from the beach. A Tasquinha charms visitors with its resemblance to a fisherman’s tavern and its detailed interior. Gracing the tiled walls are various nautical knickknacks that delight the eye and complete the cozy atmosphere. You may encounter long lines during the summer. 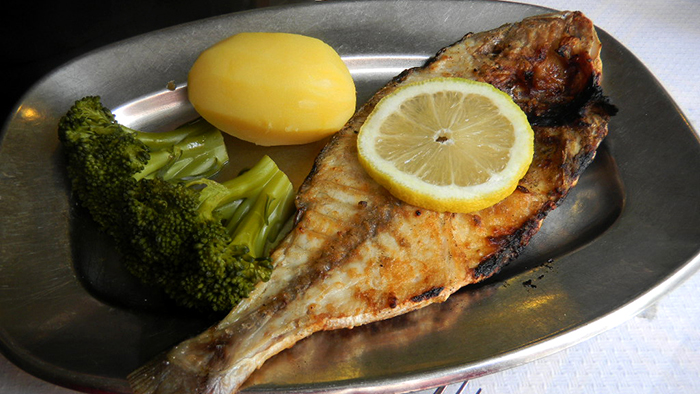 Recs: Any shrimp plate, codfish with peppers and potatoes, and the fish stew.

Open for lunch and dinner Tuesdays through Sundays. 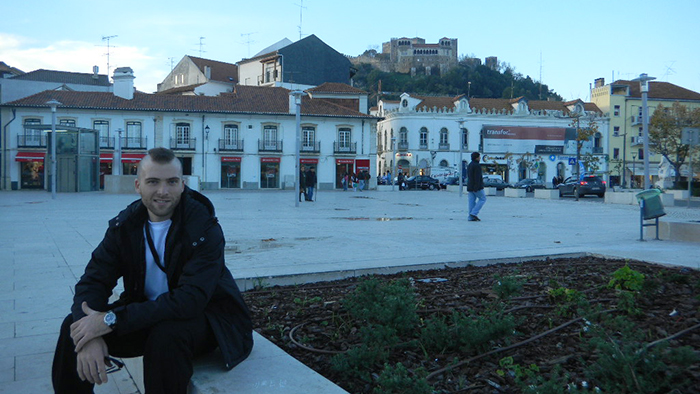 This area is considered to be the Golden Triangle because of all the religious treasures that are housed in Leiria and its neighboring towns. The main reason to visit this city is all the amazing day trips that can be taken to surrounding towns, which include Nazaré, Fátima, Alcobaça, Batalha, Obidos and Tomar. These towns also present numerous options for dining out. The best codfish can only be found at O Pipo Velho, while the picturesque Casa Nora features an amazing grilled octopus. 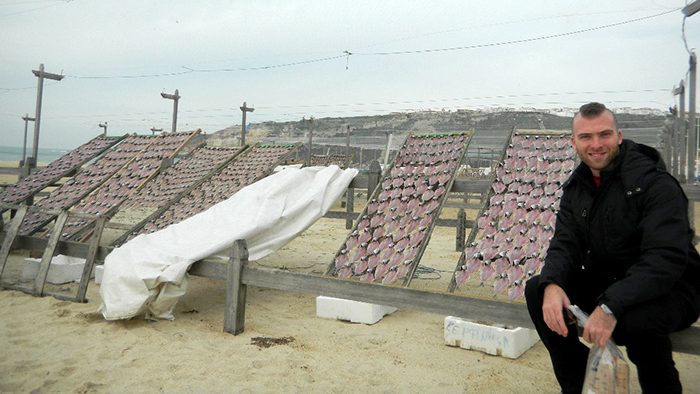 During my stay, the luxurious Villa Batalha proved to be an incredibly central location that allowed me to drive around and visit all the must-sees in the area. On that note, a car is a must since it offers much more flexibility than the local buses.

When in Leiria, be sure to visit the majestic castle. Overlooking the town, the castle radiates a medieval feeling that is felt in very few places on earth.

Getting around: Leiria is a walkable city, however, some sites like Leiria Castle are located at the top of steep hills. Not all of Leiria’s buses can access the highest points of Leiria.

Shopping: The center of town has some shops and a municipal market.

Nightlife Overview: At first glance, Leiria does not appear to have a throbbing nightlife scene like Lisbon but don’t be mistaken. If you’re looking for a fun night out, Leiria will not disappoint.

To start out your night, meet up with friends at the Rodriguese Lobo Square in the center of town. This square is where you’ll find most of the discos and bars, along with lots of small cafes where you can grab a coffee to get amped up for a night out. Most places open around 9 p.m. and get into full swing by midnight. For a smaller town, Leiria features a diverse nightlife that includes bars, clubs, lounges and live music, as well as a variety of music to satisfy all tastes.

One place to try is the Suite, where the party is always happening. Located on Rua Machado dos Santos, this club has two dance floors for two generations. On Rua Tecnologia e Gesta, the trendy and futuristic club Sushi Electronic offers a spot for electronic music lovers. If you’re more in the mood for a coffee bar, try Chico Lobo, named after the same man who gave his name to the most important and emblematic square in Leiria — the Praça Rodriguese Lobo . Chico Lobo transcends the typical coffee bar to become a place where diners can grab a quick meal, savor some ice cream or pancakes or peruse the daily paper.

What are your recommendations for things to see and eat in Leiria? We would love to hear from you! Leave us a question or comment below.