Those who are searching for ancient ruins shouldn’t miss a visit to the peninsula of Peloponnese. This fascinating region was inhabited since the middle Paleolithic era (this means 100.000 years BC), the Greeks arriving here after 2000 BC, during the Copper era. Its name was inspired by the legendary hero Pelops, who the Greeks believed conquered the entire region.

The name of this region means the “Island of Pelops”. Peloponnese can be located today in southern Greece, to the south of the Gulf of Corinth, and is home to fabulous ancient Greek sites which help us write the files of Ancient Greece history. 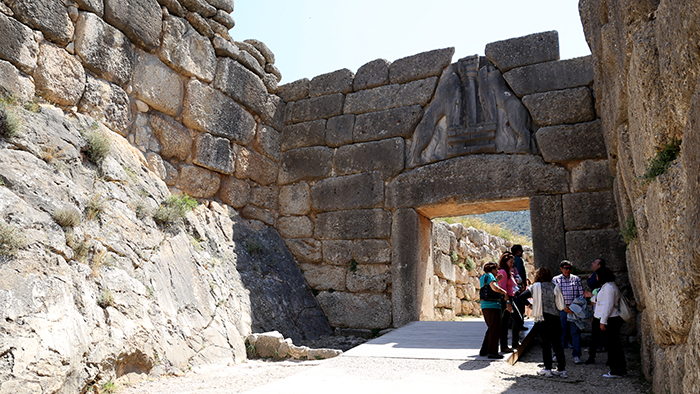 A few centuries later, the first major civilization of Greece and, as a matter of fact, of Europe, bloomed under the name of the Mycenaean or Aegean civilization. In 1200, Dorian and Aetoli arrive in the region, and the cities of Korinthos, Argos and Sparta appeared. Olympia housed the Olympic Games every four years, until 393 BC, when the Byzantines abolished them. Peloponnese was involved in the Persian Wars and was the scene of the Peloponnesian War that took place between 431 and 404 BC. In 146 BC, the Romans took over the region and named it the province of Achaea.

The Franks conquered Peloponnese in 1294, while a few centuries later the Turks stepped in. The region returned to Greece in 1827, after the sea battle in Navarino. The region is today visited by millions of curious tourists eager to discover ancient Greek ruins that remind everyone of the grandeur and ingenuity of those great people who were the ancient Greeks. Here are the top 5 ancient greek sites in Peloponnese, Greece: 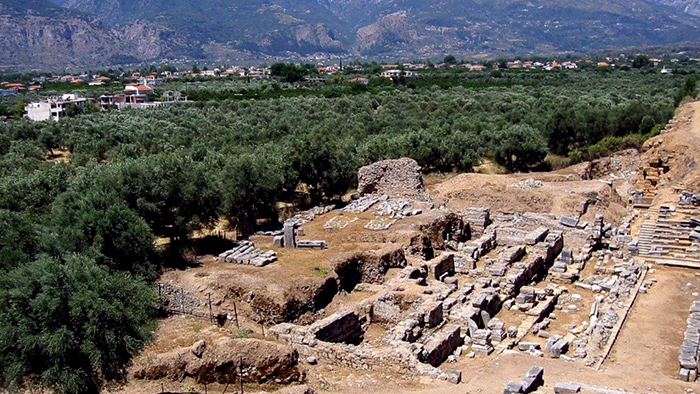 We’ve all heard of the mighty Spartans and their…Spartan lifestyle, and we can’t help but feeling intrigued and amazed by their strength and determination. Books have been written and movies have been made about this fascinating country and its brave warriors. Sparta was one of the most important Greek city-states during the Archaic and Classical periods, and was a fearless rival of Athens and Corinth. It was founded in the 9th century BC, and between the 8th and 5th century BC it conquered Messenia. Starting with the 5th century, the rulers of Sparta centered only on war, while diplomacy, arts, philosophy and literature were being neglected and forgotten. 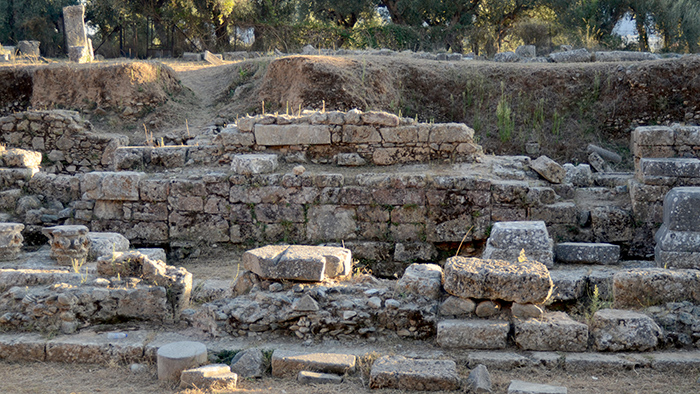 Spartans fought with bravery during the fights of Thermopylae and Platea, in the early 5th century, and during the Peloponnesian Wars and the Corinthian Wars, which took place in the 5th and 4th centuries. Their strength was weakened especially following the defeat during the Battle of Leuctra, when they fought with Thebes, and it marked the beginning of the end. For the following two centuries it managed to stay independent, but Sparta never had the same power as before. Romans conquered Sparta during the 2nd century. 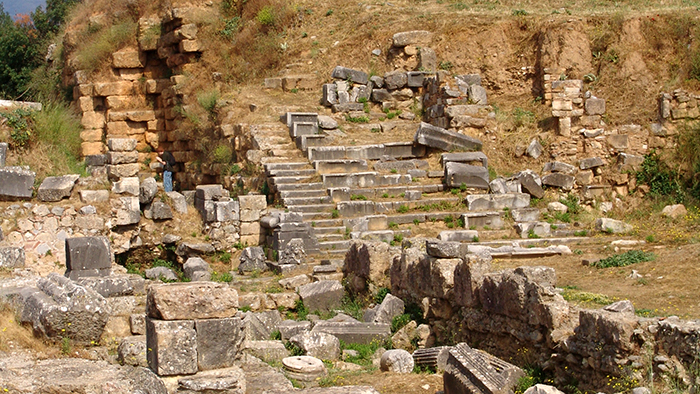 The ruins of ancient Sparta can be seen outside the modern Greek city of Sparti, which was founded in 1834 by King Otto of Greece. However, part of these ruins date back to the Roman period, so those who are searching for Spartan ruins will be a bit disappointed. You can admire the ancient theater of Sparta and the tomb of the famous Spartan King Leonidas, and there are many artifacts that date back to the Spartan era in the Sparta Archaeological Museum. 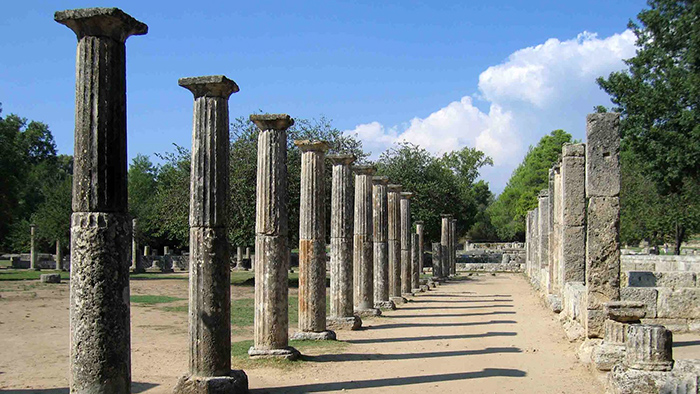 Olympia was a vibrant city situated in the western side of Peloponnese, a settlement dedicated to the worship of Zeus and Hera. The first large building to have ever been built on this site was the Heraion, a temple dedicated to Hera. It was built between 650 and 600 BC and was the largest temple in Greece at that time. The beautiful temple of Zeus was built in 470 BC. 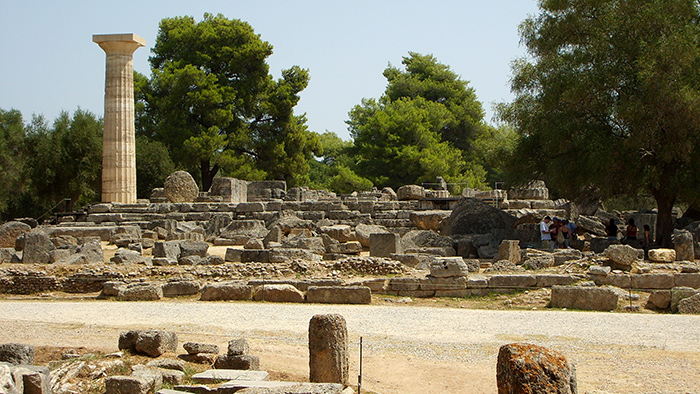 The site of Olympia was inhabited since 3000 BC, but it began to flourish only after the Mycenaean civilization arrived here. The first Olympic Games, held in the honor of Zeus, took place in 776 BC, and where a national event which gathered participants and spectators from the entire country. The games were held until 393 AD, when the Roman Emperor Theodosius I called them a “pagan cult” and ended the tradition. The ruins of the stadium where the legendary games were held, and which could accommodate up to 40,000 spectators, can still be seen today on the site of Olympia. Many of the other important buildings of Olympia such as the Altis, Bouleuterion, Gymnasion, Hippodrome, the House of Nero, Metroon, Nymphaion and many other are still visible. 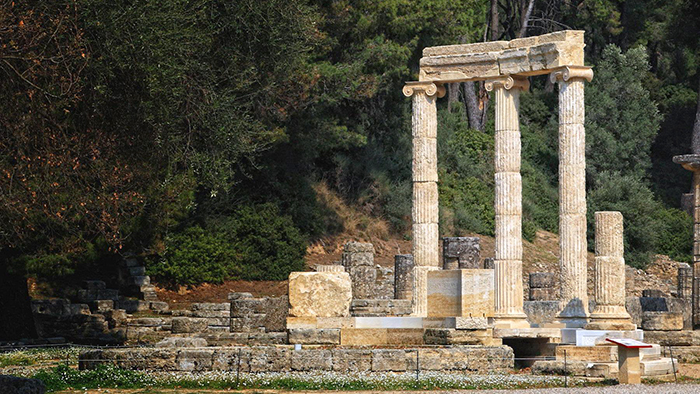 The modern city of Olympia is today a popular touristic city, surrounded by beautiful hills. Getting to the ancient ruins of Olympia is a pretty easy task to accomplish as long as you follow the signs. For more details about the site don’t hesitate to visit the Olympia Archaeological Museum. 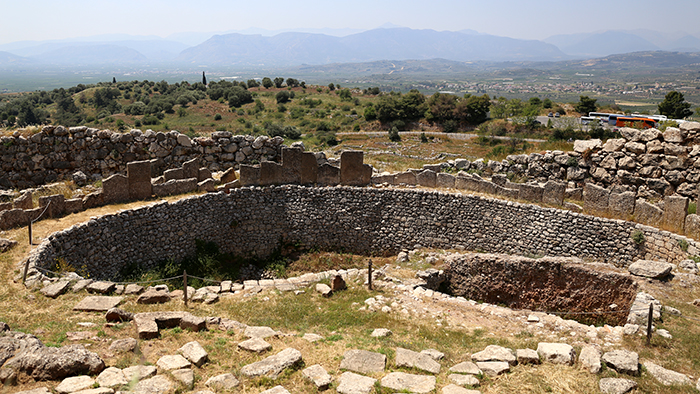 If you see the ruins of Mycenae today, you will find it hard to believe that this was once a powerful kingdom that ruled a great part of the Mediterranean world. This happened between 1500 and 1100 BC, when the Mycenaean civilization was at its peak. The ruins of the acropolis you can see today date from between the 14th and 13th century BC, but it is believed that this site was inhabited since Neolithic times. The city of Mycenae was once ruled by the famous King Agamemnon, and it is linked to the legends of Odyssey and Iliad.

Check out Roman Ruins In and Around London 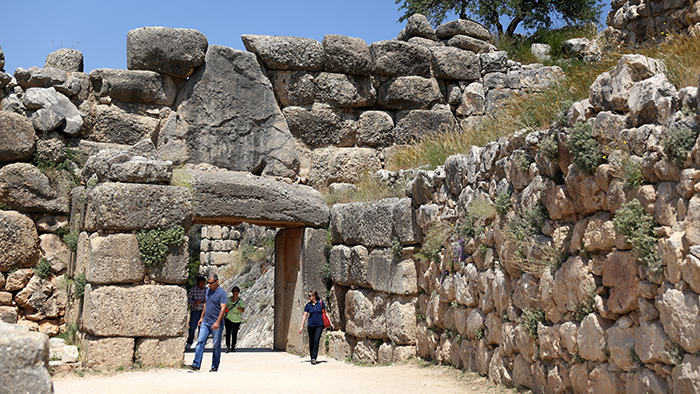 Today, tourists can admire some very well-preserved ruins, such as the Lion’s Gate and the North Gate, that were a part of the city’s fortified walls. Ruins of villas, a granary and guard rooms are also distinguishable, as well as the Mycenae’s Terraced Palace, abandoned in the 12th century. 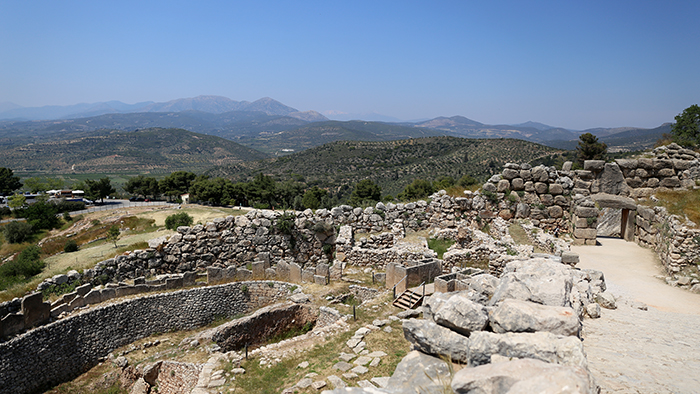 However, all the visitors that get here are attracted by the Tomb of Agamemnon, known as the Treasury of Atreus, which dates back to the 13th century. Many of the artifacts discovered here are exhibited inside the National Archaeological Museum in Athens, the most remarkable one being the Death Mask of Agamemnon. 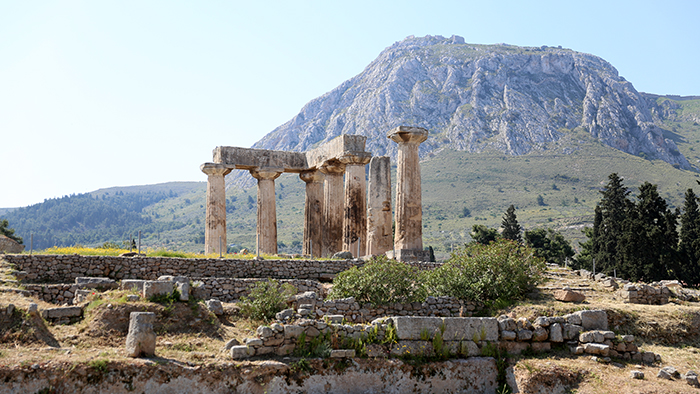 The ancient city of Corinth was one of the great cities of Classical and Roman Greece. Corinth was above all a very important port and a rich trade center, whose ascension began in the 8th century and its peak was reached during the 7th century, under the rule of Periander. The Ancient Corinth is situated 7 km from the modern city, on an isthmus between the Saronic and Corinthian gulfs. Its fame and power was gained due to its location that allowed ships to transport goods across this isthmus. 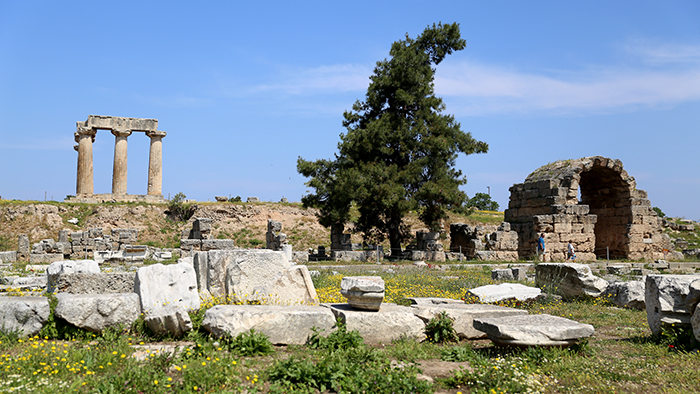 In 338 BC, following the Peloponnesian War, the city was conquered by Philip II of Macedon. The Romans conquered the city in 146 BC, when it was partially destroyed. The city was reconstructed under the supervision of Julius Caesar, but in 267 AD was invaded by the Herulians, and so its decline began. After the Herulians, the Turks came, and then the Knights of Malta, Venetians and finally, the Greeks. 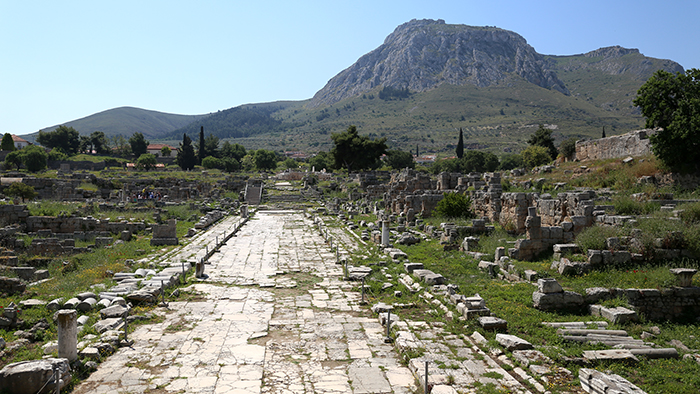 Today, the site houses the great ruins of the Temple of Apollo that dates back to 550 BC and those of the Temple of Octavia. There are also ruins that date from its Roman period, structures such as the theater and the Peirene Fountain. Many of the objects discovered here have found a home inside the Archeological Museum of Ancient Corinth. 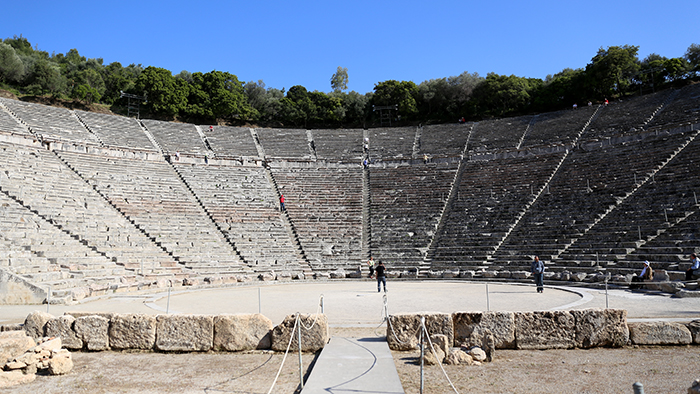 Epidavros was another important city in Ancient Greece, famous mostly as a center for healing. The city was dominated by temples dedicated to healing deities such as Apollo, Asklepios and Hygeia, and many spa centers. The main sanctuary area was Asklepieion where you can still see the ruins of two healing spas and a shrine dedicated to Asklepios. Visitors can also see the Tholos, a structure that was used as a pit for sacred serpents.

Check out Neolithic Sites in Europe 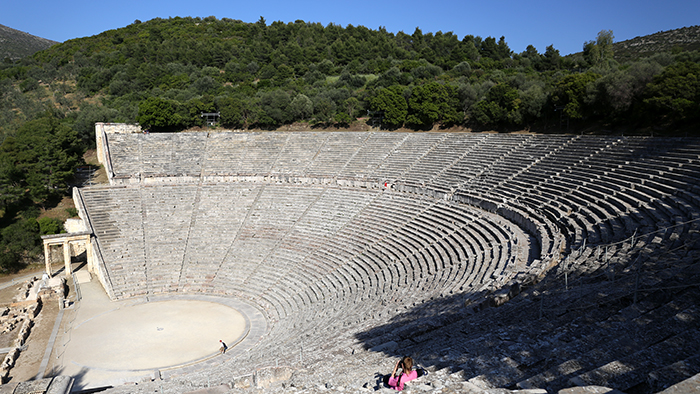 However, visitors that arrive here today don’t come for the healing powers of the spa centers, but to admire the majestic Epidavros Theater that dates back to the 4th century and could accommodate up to 15,000 people. The stage of the theater is 20 meters long and the only one that has managed to win the battle against time. It is believed that it was constructed in such manner that if you drop a pin on its ground you can hear the noise from anywhere in the theater. The Epidavros Theater is still used today as a stage for theater performances. 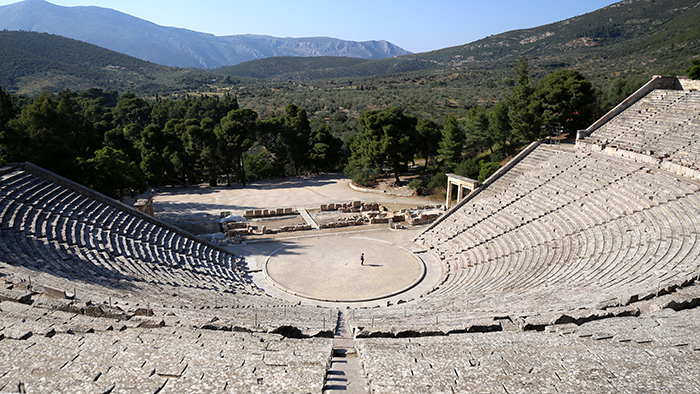 Visitors can also find ruins that date all the way back to the Mycenaean period or to the Roman times. The nearby museum houses many of the artifacts brought to surface from the site of Epidavros. Of the 5 ancient greek sites in Peloponnese, Greece this is by far my favorite! Everyone should visit the Epidavros theatre as a day trip from Athens. 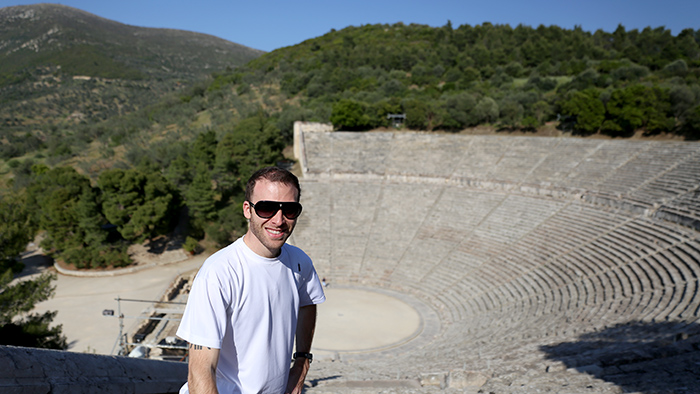 Did you enjoy the article 5 ancient greek sites in Peloponnese, Greece? Leave us a comment below with your thoughts!