After arriving in Tezpur around 10 a.m., I hit the ground running and linked up with my friend Kamal from Tezpur Buzz, who took me around to some of the city’s attractions. Then we had a giant Assamese thali that contained 20 different items! I couldn’t wait to see more of this city in northeast India. Let’s go explore Tezpur! 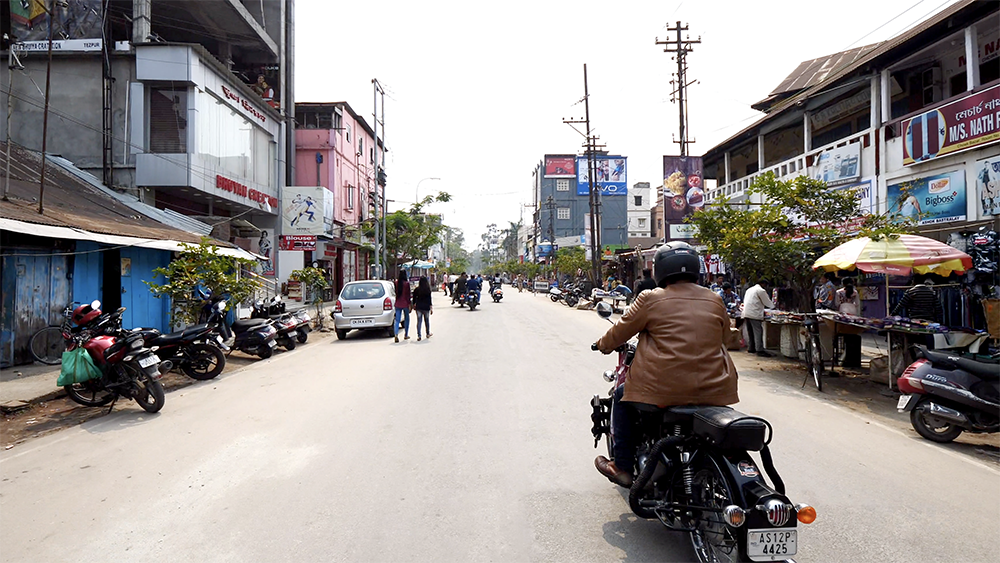 I hopped onto the back of Kamal’s bike and we headed off to our first stop. Immediately, I noticed a huge difference between Tezpur and my time in Meghalaya: in Tezpur there were lots of cows roaming the streets, whereas there were none in Meghalaya. Cows are sacred in Assam, so they’re free to roam.

Check out the Top 10 Things to See and Eat in Tezpur, India

We passed through the Chowk Bazaar, which are markets, and arrived at Radheshyam Hotel, which is famous for its chai and sweets. I couldn’t wait to try some! I watched the cooks work in the kitchen for a bit and then went back to the dining area to eat. 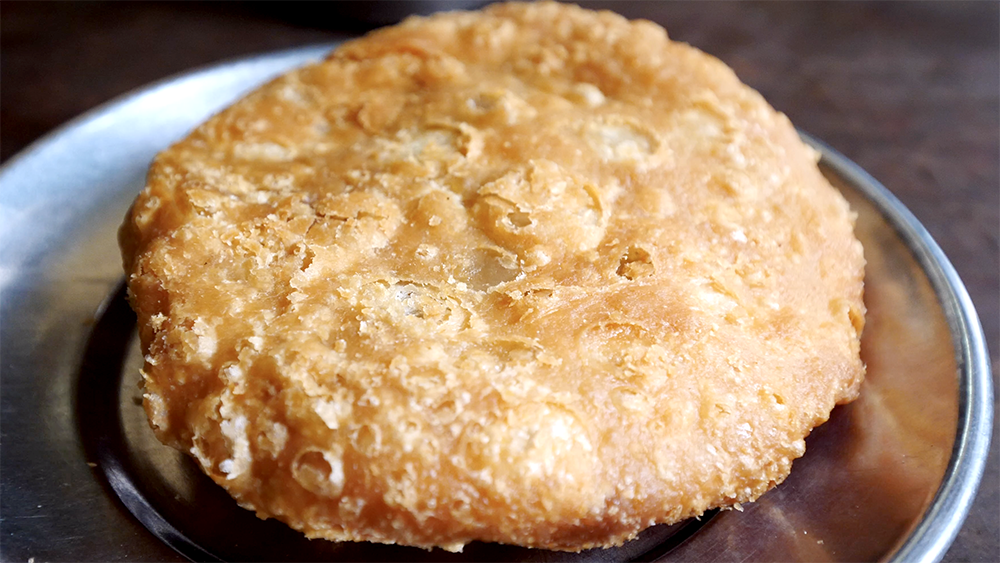 I started with the pyaaj kachori, which is a fried onion fritter. The dough was crispy on the outside and soft inside and contained multiple layers. It wasn’t greasy at all and also contained a nice masala. I loved how light and airy it was! 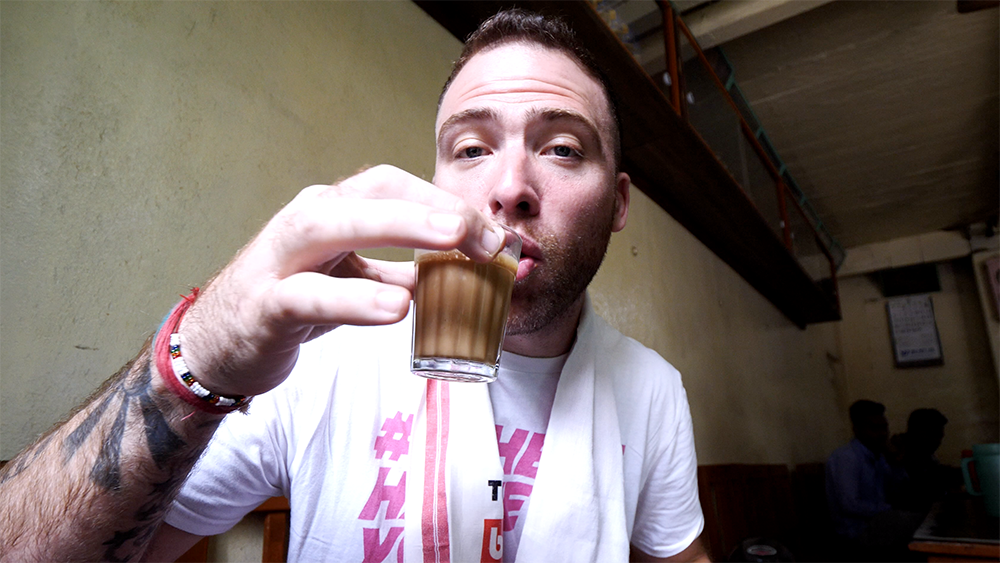 Then I went with the chai. I could taste lots of ginger and cardamom in it. It was very frothy and milky and almost a darker kind of chai. Then I had some rabri, a sweet, condensed milk dish I’d had before. It was very rich with big chunks of milk. It was delicious! Everything cost us only about 50 rupees/$0.71 U.S. 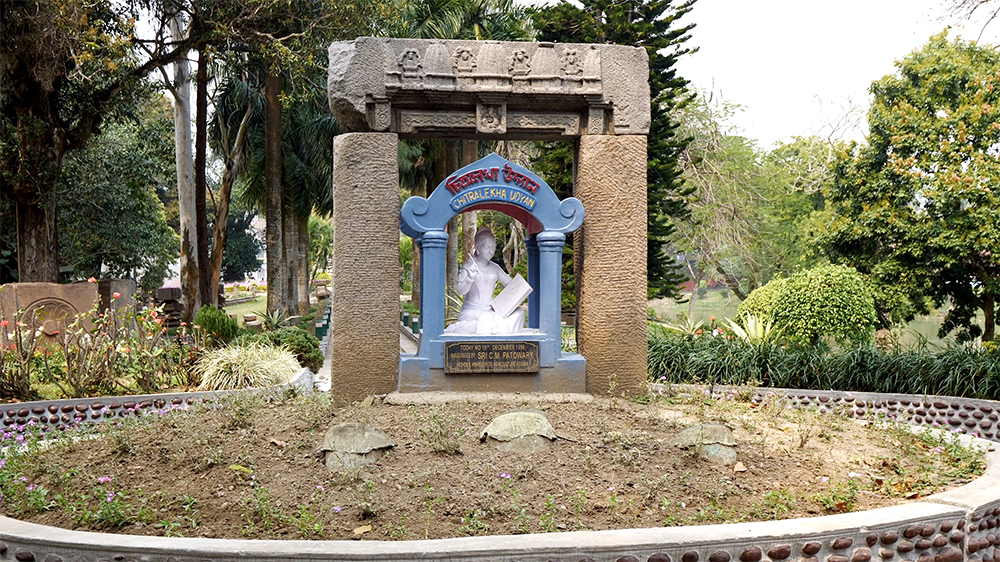 Then we went to Chitralekha Udyan Park, a historical park that contains ancient stones that have mythological figures carved into them. They were beautiful! There were also banyan trees. This area was Chitralekha’s house and the stones are the remains of it. It was the coolest park I’d ever been to! It was a park and an archaeological site!

Next, we saw the beautiful Shri Shri Ganesh Mandir Gate, which has intricate carvings and statues of Hindu gods, elephants, and Hanuman on it. Through the gate is the Ganesha Ghat on the Brahmaputra River. It was clean and peaceful! 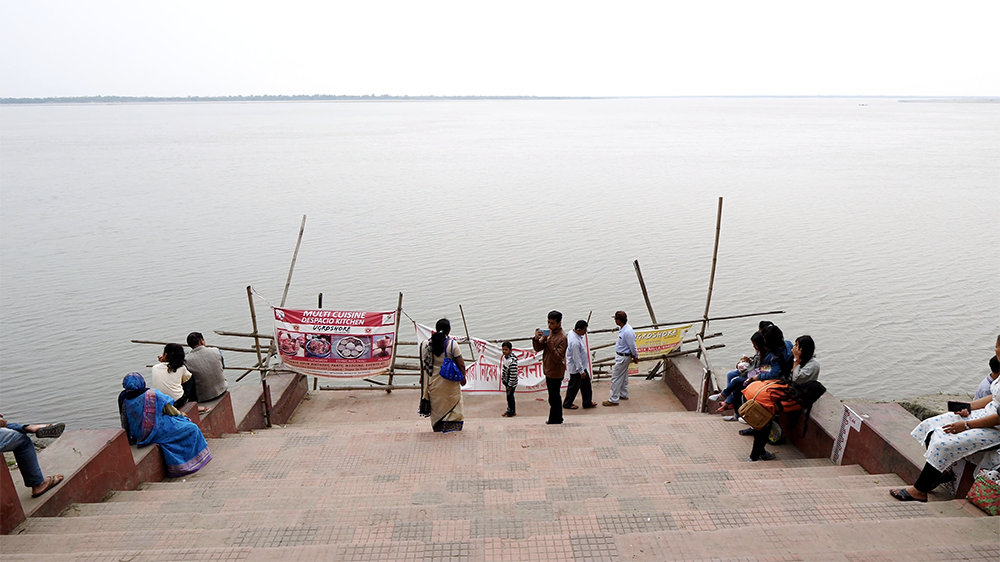 From there, we headed up a hill to Agnigarh Park. Agnigarh is a hill with a spiral staircase wrapping around it. I loved the air quality there. It smelled so clean and there were lots of trees everywhere! At the very top is an open-air platform that offers an amazing view of the river, the bridge, the town, and much more! 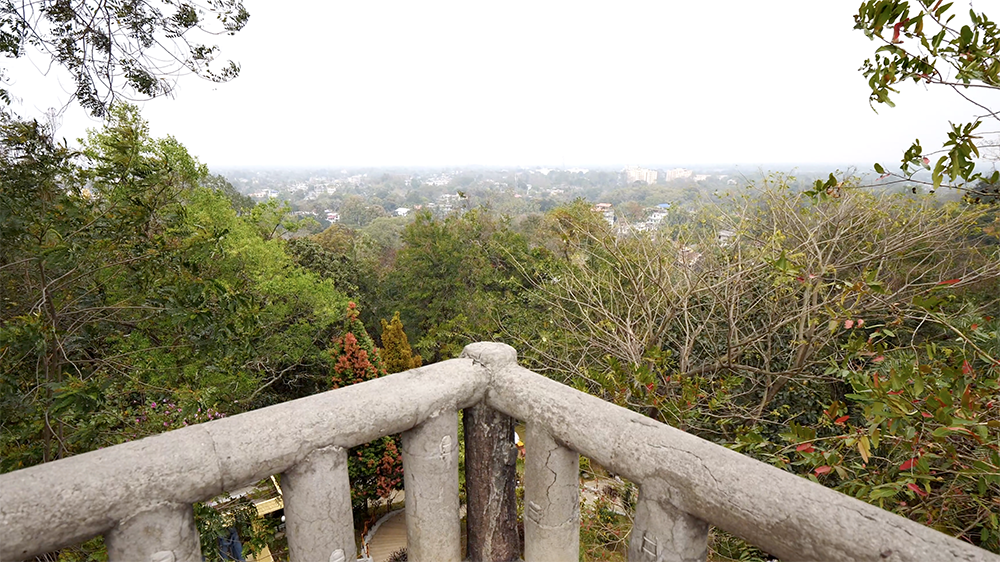 Then it was time to eat! We headed to the restaurant to have our giant Assamese thali. I started with the dal and rice, followed by the eggplant, which was amazing and a little spicy. Then I tried the rajma, which consists of beans in a thick but light gravy. Next was a spinach-like vegetable and a tasty aloo dish with carrots and onion. 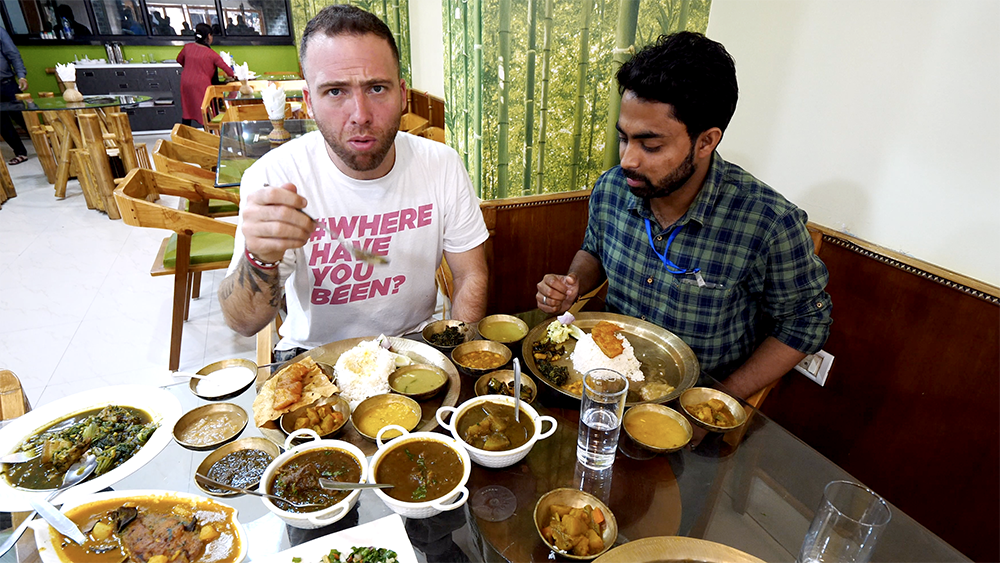 Aloo pitika was next. It contained some chilies, so it was hot. I followed that with a super tender and buttery mutton that I was in awe of. It contained nice spices but wasn’t too spicy. Next was duck, which was delicious and fatty and contained a big bone. I loved how tender and juicy it was.

The chicken came in a dark curry and contained a different type of masala. Then was the fish, which didn’t contain any bones and came in a light curry. It was a little salty. Then I went with the crispy papad and some delicious and super fatty pork with vegetables. The vegetables were amazing! Then I tried a type of pumpkin, which was like a fried sweet potato. I loved it! 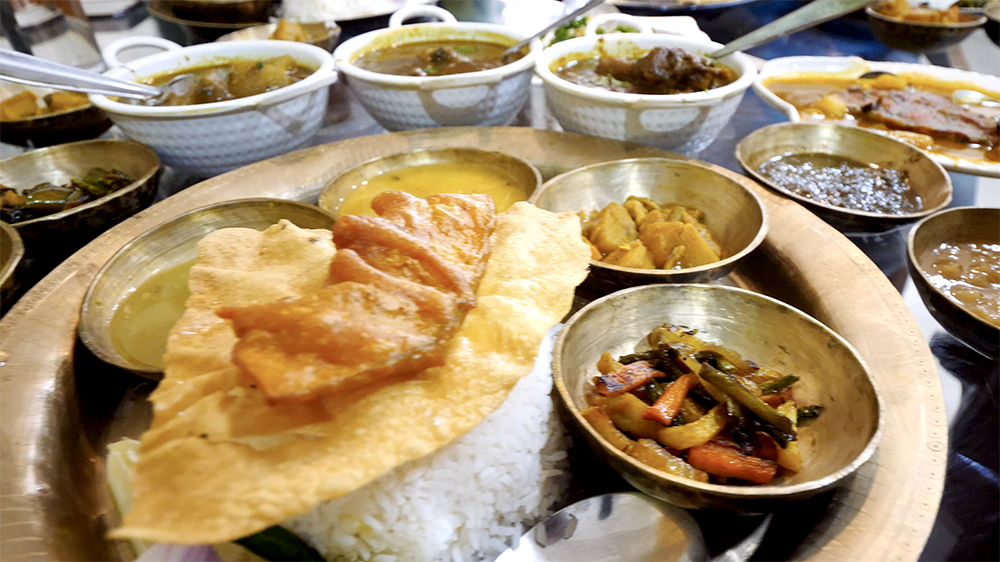 Next was a milky rice pudding, followed by khar that was made of papaya but wasn’t sweet. Then was a lentil chutney and a light and super mild green dal. Everything in this giant Assamese thali was amazing! 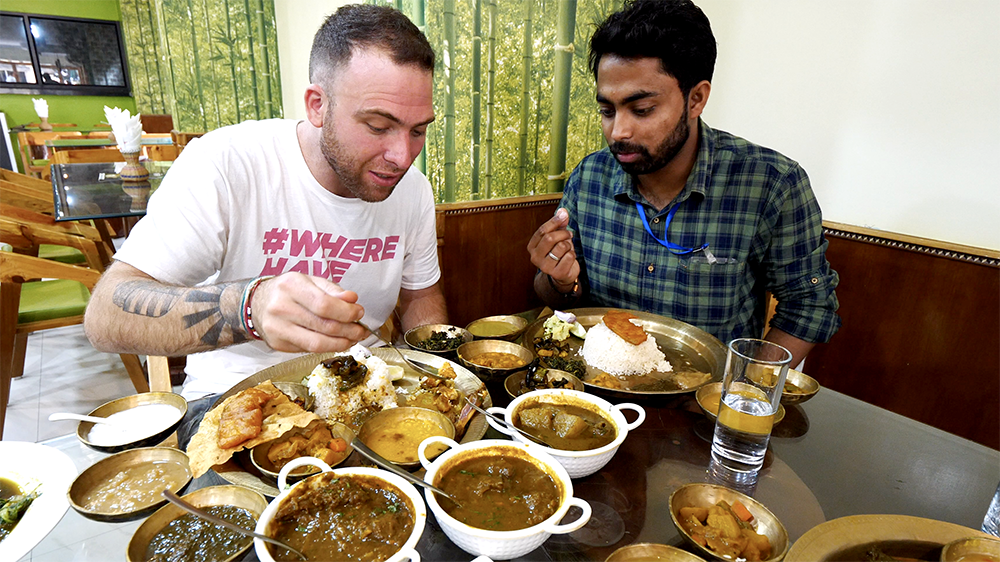 I hope you enjoyed coming with me to explore Tezpur and try a giant Assamese thali! If you did, please give this video a thumbs up and leave me a comment. Also please subscribe to my YouTube channel so you don’t miss any of my upcoming travel/food videos!