After arriving in the ancient UNESCO city of Bukhara along the Silk Road, I hit the ground running by having some traditional Uzbek food before heading out to explore. Come along with me as I go on a tour of the holiest city in Uzbekistan! 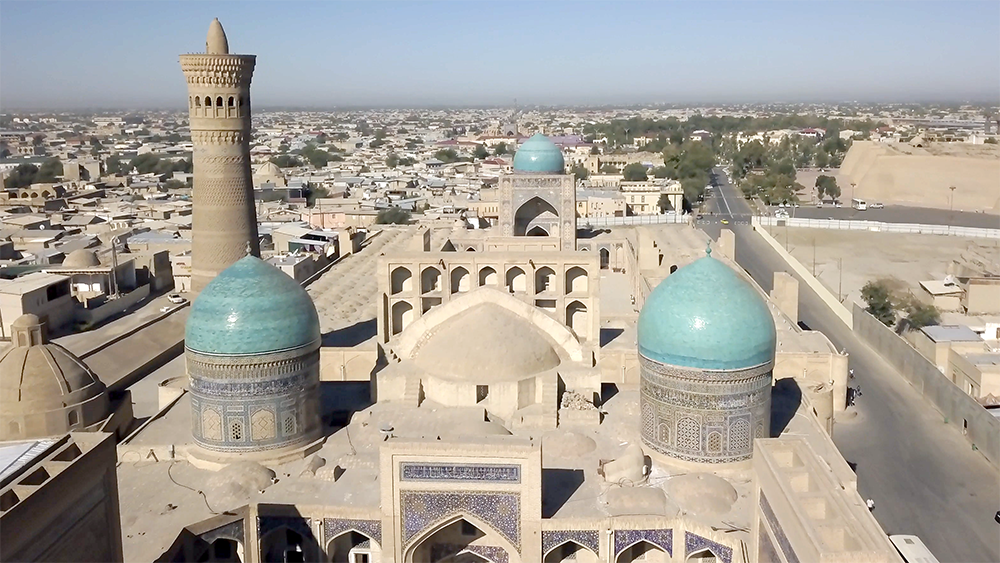 Bukhara is one of the most important cities in Uzbekistan and dates back to 500 BC. It was the second-most important city in the Islamic world back in the 9th century after Baghdad. I couldn’t wait to explore but first, it was time to eat at Lyab-i Hauz Restaurant!

We passed through an amazing bazaar with vendors selling lots of bags, jewelry, hats, and handicrafts to get to the restaurant. It was next to a beautiful pond. We ordered a big spread of traditional Uzbek food including eggplant salad, salad with cheese and olives, salad with fried potatoes on top, tomatoes, and yogurt sauce!

The eggplant was outstanding and the yogurt sauce was sweet and delicious! Next was an amazing mixture of beets, meat, and fried potatoes. The somsa was buttery, juicy, and fatty with had nice layers and juicy tomatoes inside! 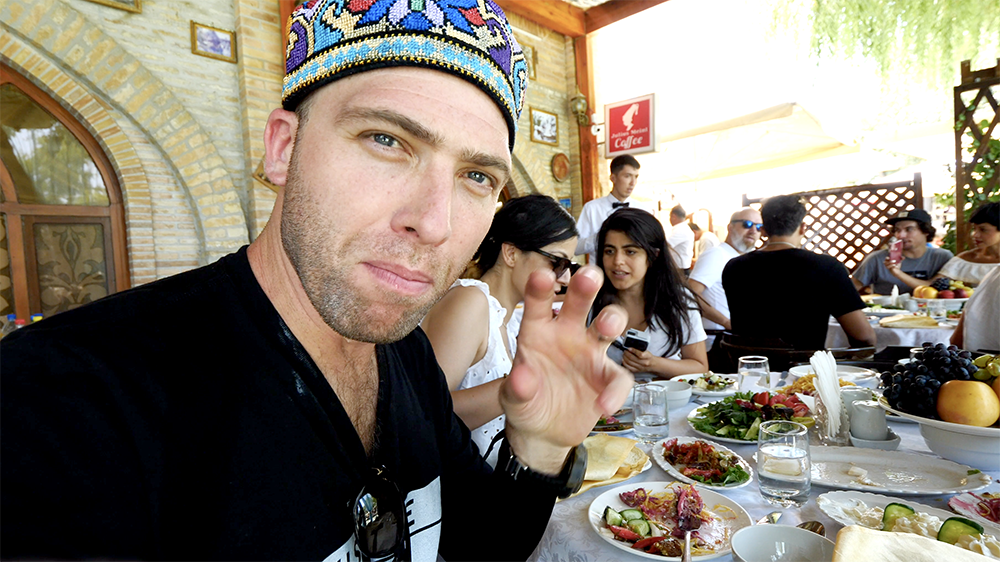 Then, we were served some strong Uzbek vodka. We followed that with some delicious lamb soup containing yellow carrots, potato, and lamb fat. Not everyone at my table loved it, but I liked it so much that I wanted everyone else’s lamb, too! After that, our traditional Uzbek food lunch continued with a white wine that was different from the kind I was used to. We followed the wine with the national dish, plov! 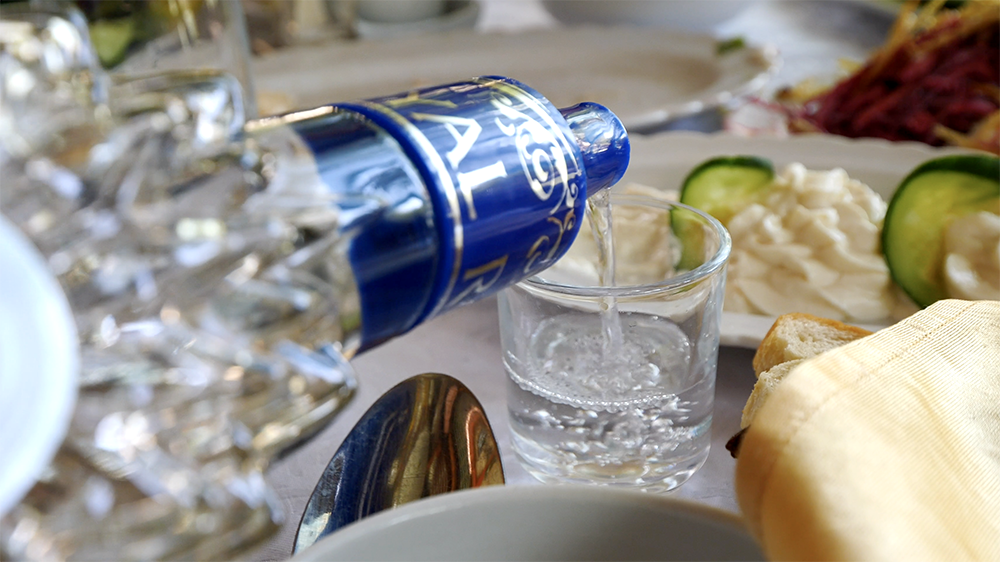 The plov contained rice, yellow carrots, and raisins, and lamb meat. Plov has lots of regional variations, but it has always been super tasty regardless of where I tried it. The lamb meat in the plov was gelatinous and tasted like brains! Then, we moved on to the main course: salty, fatty lamb kebabs with onion. It was as good as Greek lamb and had a char on the outside. The combination of charcoal flavor, saltiness, fattiness, and tender meat was unbeatable! 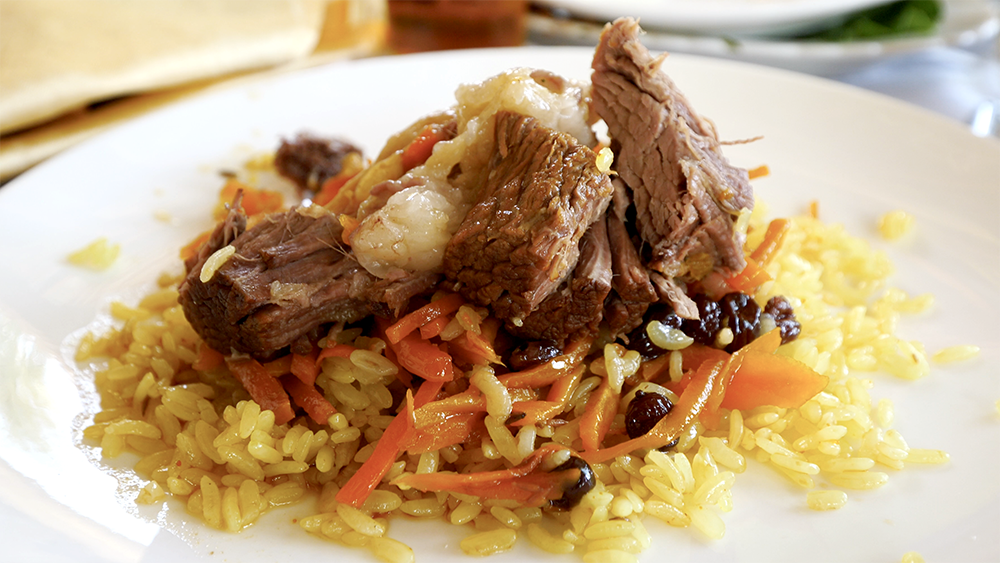 We finished with some vanilla ice cream with a breadstick. It was great, but it gave me brain freeze!

Check out the Top 5 Things You Must Do in Khiva, Uzbekistan

After lunch, I visited the Bukhara Jewish Synagogue, the oldest synagogue in Bukhara. It’s 420 years old, where I saw the Torah, which is essentially the Jewish bible. Then, we visited a puppet workshop. 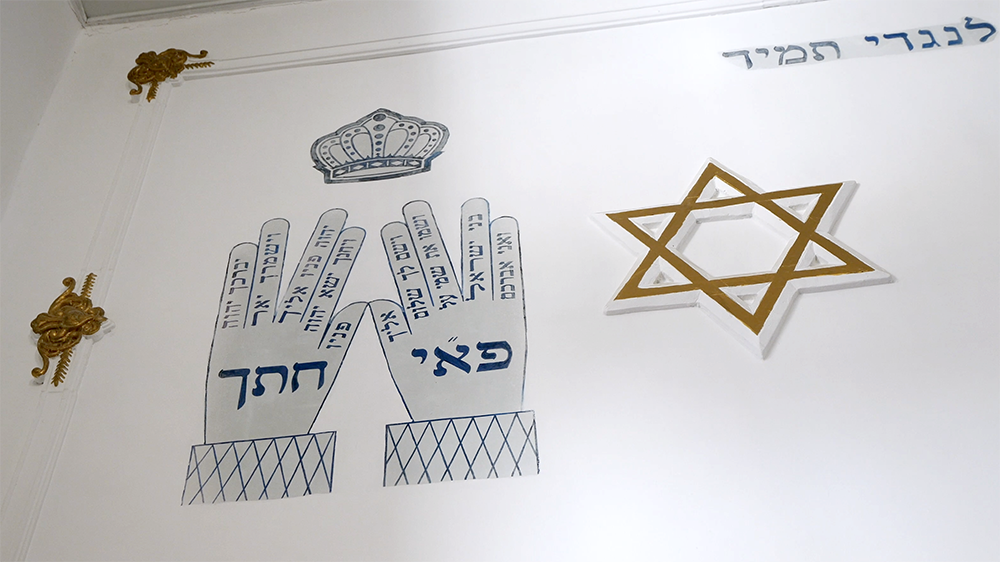 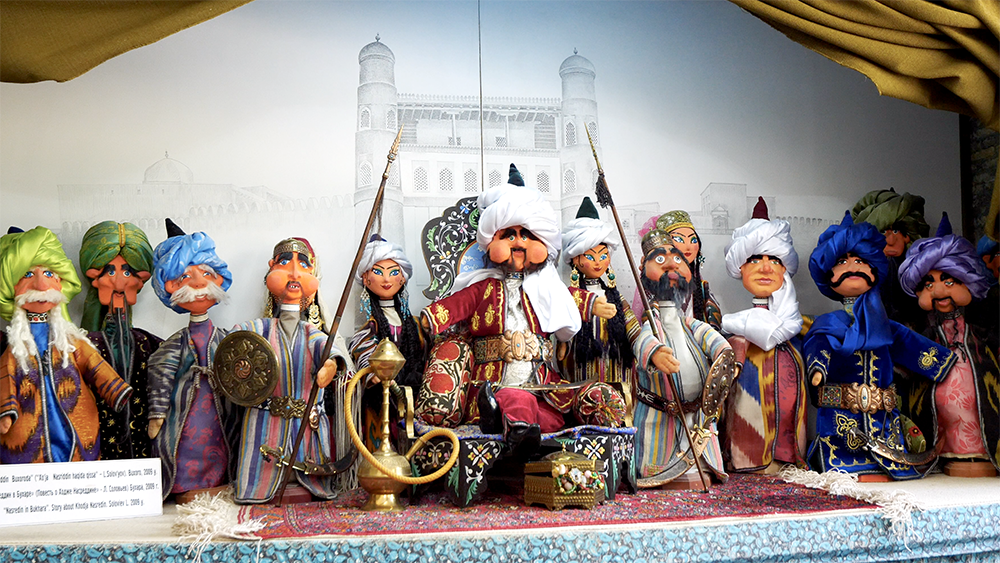 Outside, I tried on a fur hat before we continued on to under a dome where there were a few vendors. It used to be a domed bank! Then, back outside, I saw a vendor selling lots of beautiful, affordable, handmade decorative plates. 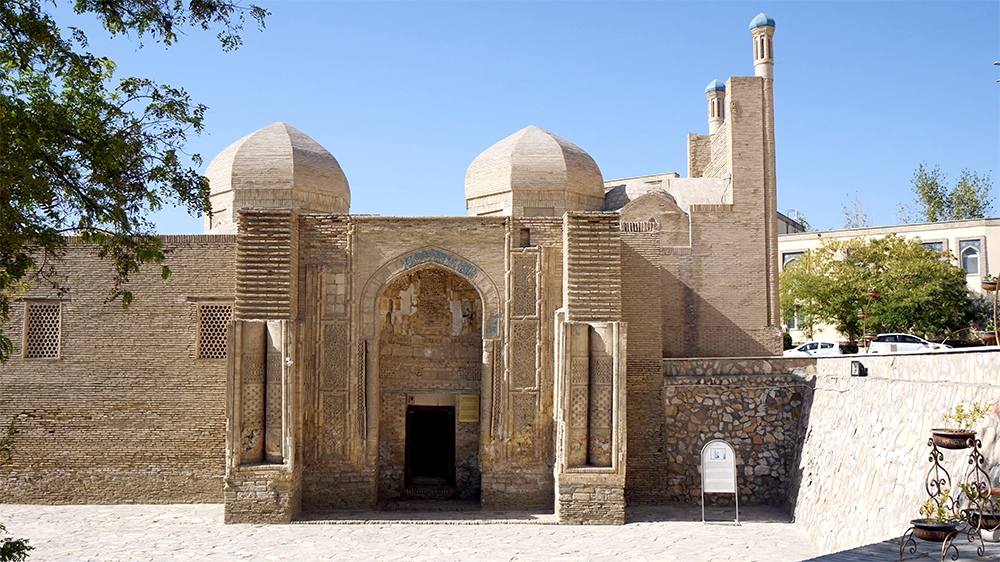 Then, we visited the Magok-i-Attari Mosque, which dates back to the 12th century. It looked really ancient, like it was made of sandstone. I could see parts that had been restored. I had never seen a mosque like it! We also visited an archaeological site unearthed 6 years ago that contains ruins of a hammam from the 16th century. 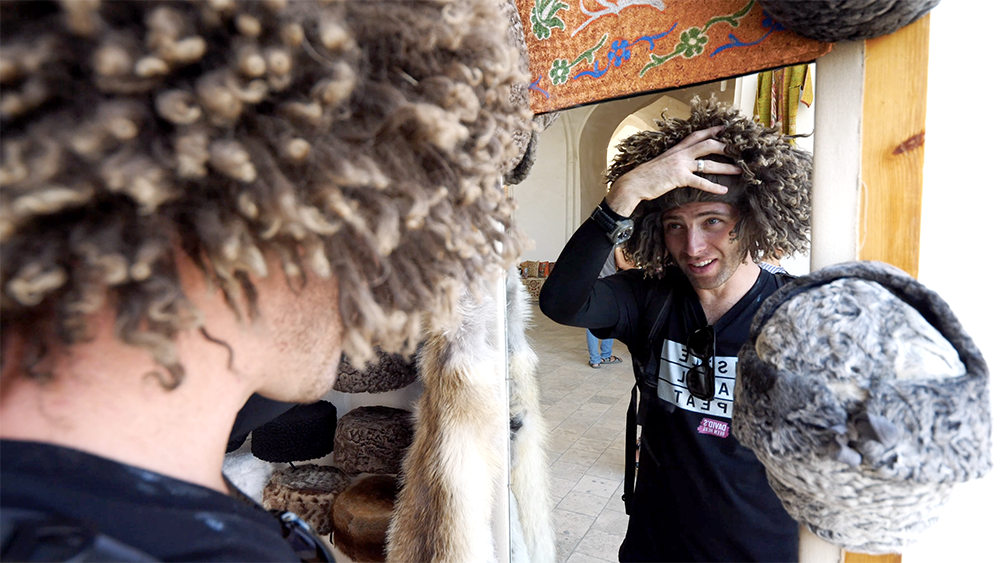 I went back to the hat vendors in the second bazaar. The hats were status symbols and denoted your nationality! The big, woolly hat I tried on was so hot!

Next up, I found a vendor selling scissors, padlocks, and knives that he carves into different shapes, including animals! Then, I visited a madrasa built during the Islamic Period. It’s a craftsman workshop but used to be a school. Across from it is another madrasa, where I bought two shirts for 100,000 som, or about $10 USD. 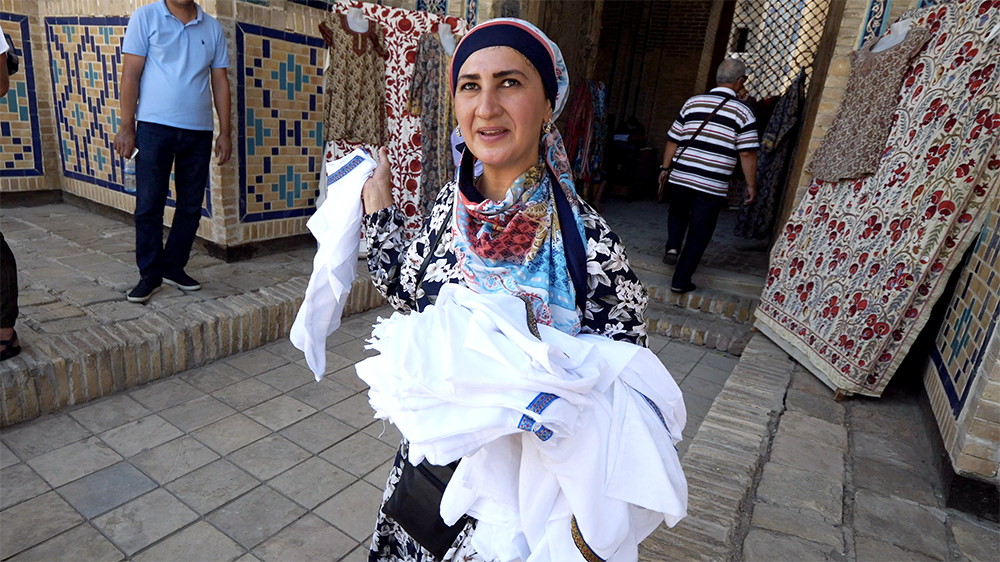 Next, I visited a famous tea shop called the Oriental Tea House. The tea was minty and had lots of spices in it, but no sugar. We enjoyed it with a traditional halwa before heading to Kalyan Minaret, which is part of a complex containing two madrasas and a mosque. We got government approval to go to the top! 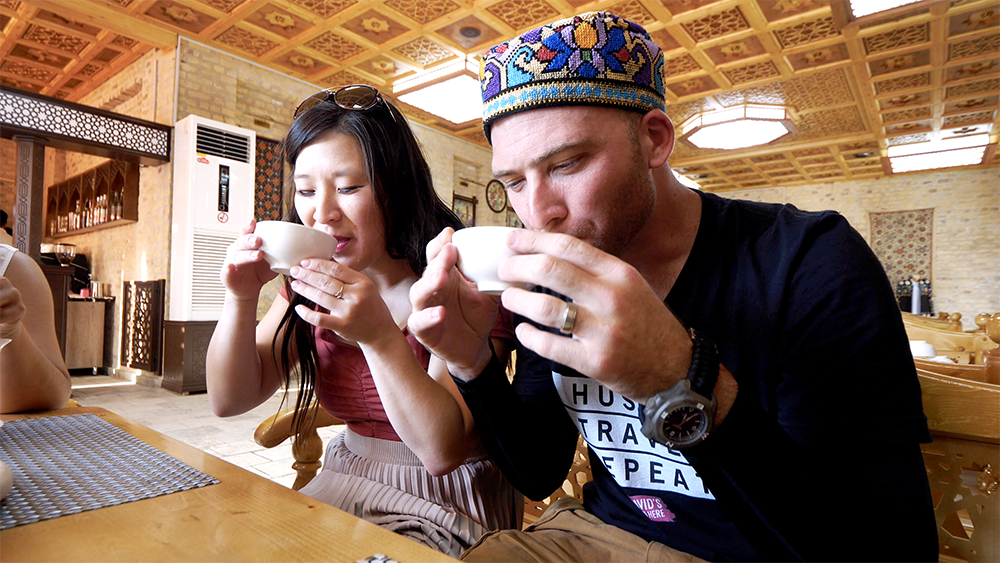 It was dark inside and the stairs were steep. The trek was intense, but the view of the mosque, madrasa, and old city with the setting sun was unreal! 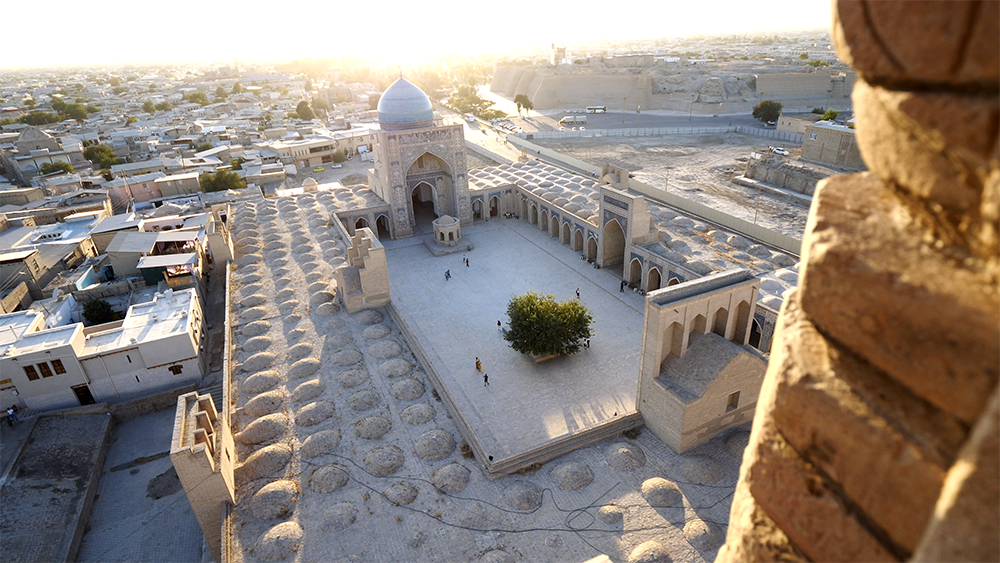 I hope you enjoyed coming with me to try traditional Uzbek food and explore Bukhara! If you did, please give this video a thumbs up and leave me a comment. Also, please subscribe to my YouTube channel so you don’t miss any of my upcoming travel/food content!