My adventures in Termez, the hottest and southernmost city in Uzbekistan, continued with a tour of an amazing local silk factory and a delicious dinner of exotic Uzbekistan food like horse salad, and some vodka, of course! Come along with me as I continue exploring the city of Termez! 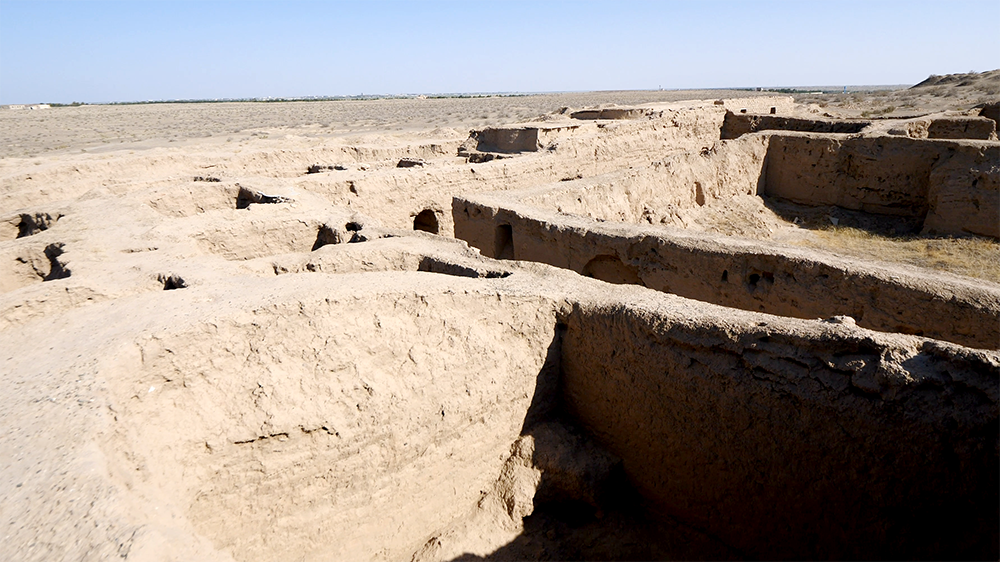 Termez is located right next to the Uzbek/Afghan border and is famous because it marks the beginning of the Silk Road in Uzbekistan. Speaking of silk, my afternoon adventures began at a silk factory called Surxon Ipagi. 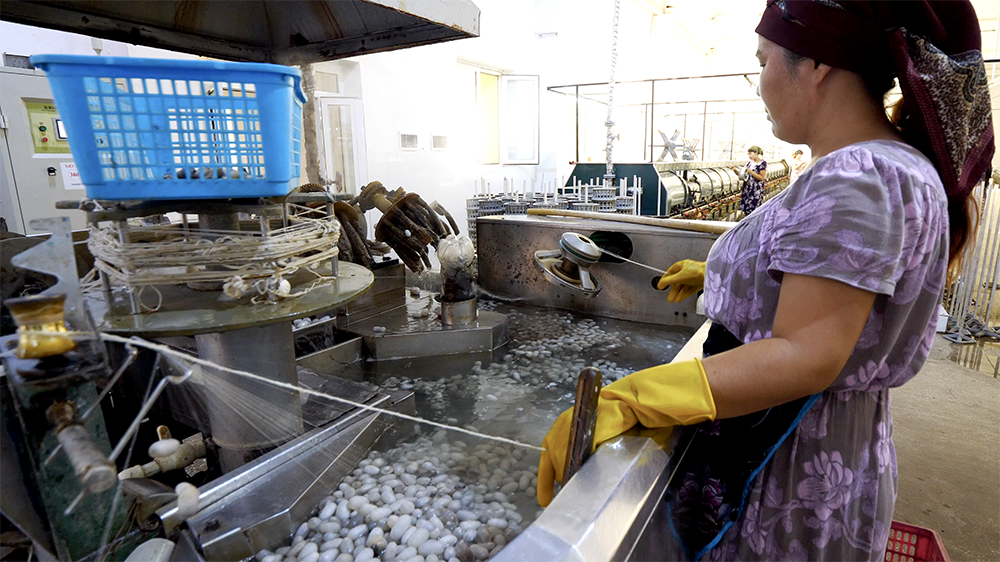 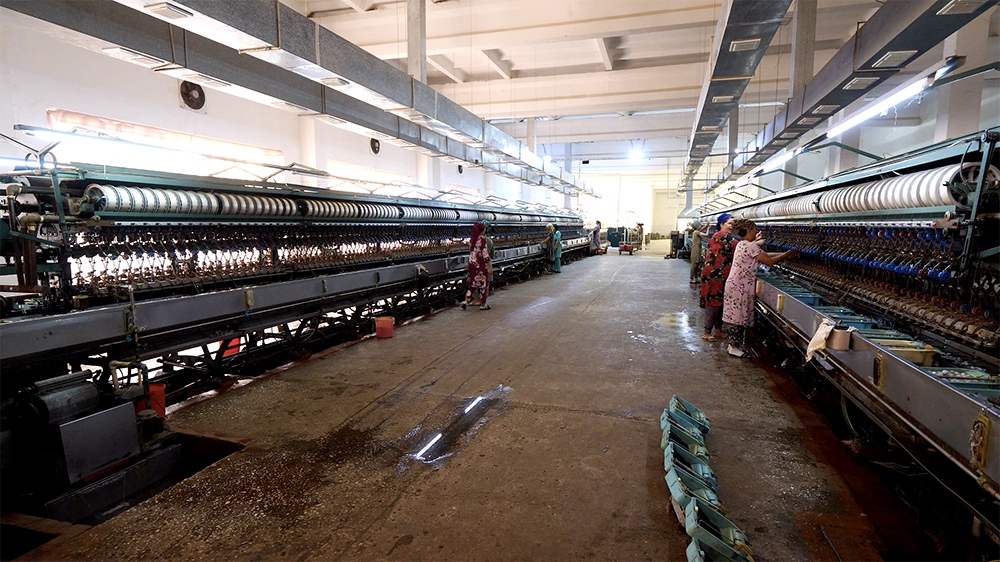 The factory was huge! They have over 1,200 rolls and each one is 8 kilometers. They produce about 10,000 kilometers of silk here per day. In one month, they produce 10 tons of silk fiber!

This factory’s process was a little different from the process I saw at the silk factories in China. I had never seen a factory like this. I hadn’t yet seen the process in Uzbekistan; so far, I had only seen the weaving. 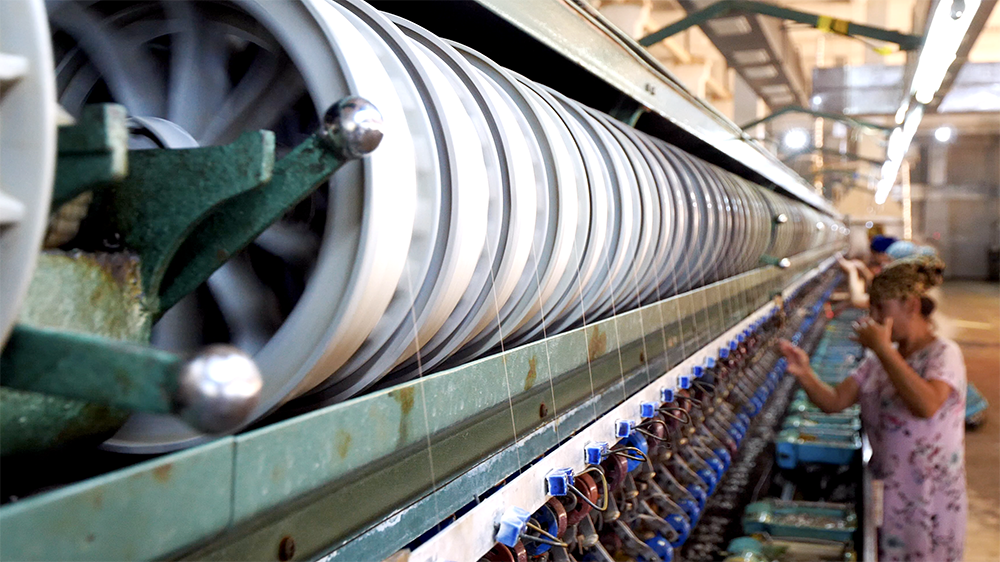 After they pull 8 kilometers of silk on a roll, the roll is washed and dried. The cocoons are grown in villages around the area. They’re taken to warehouses and dried before they’re sorted by women along an assembly line of sorts. They separate and clean them, and throw out any waste. The good ones go to the factory. 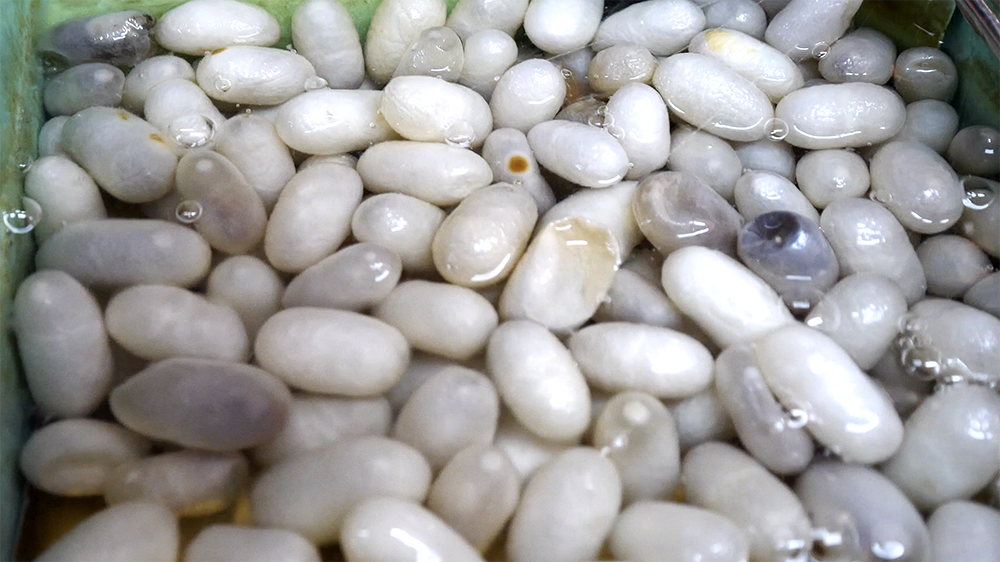 Once they wash and dry the rolls, they’re brought to a room where five rolls are brought to an area and combined into one 40-km band. There are five bands that spin, which equals 200 kilometers! I couldn’t believe how much silk that was! 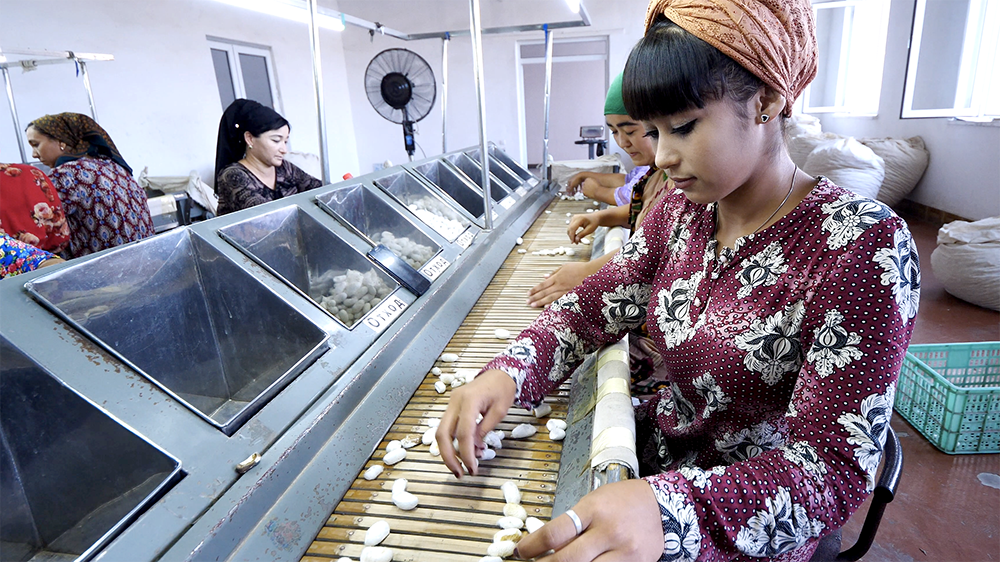 Then, they prepare the silk fibers for exporting. The women clean the fibers and then collect five pieces together, roll, and press them. Then, they’re put in paper packages and marked. 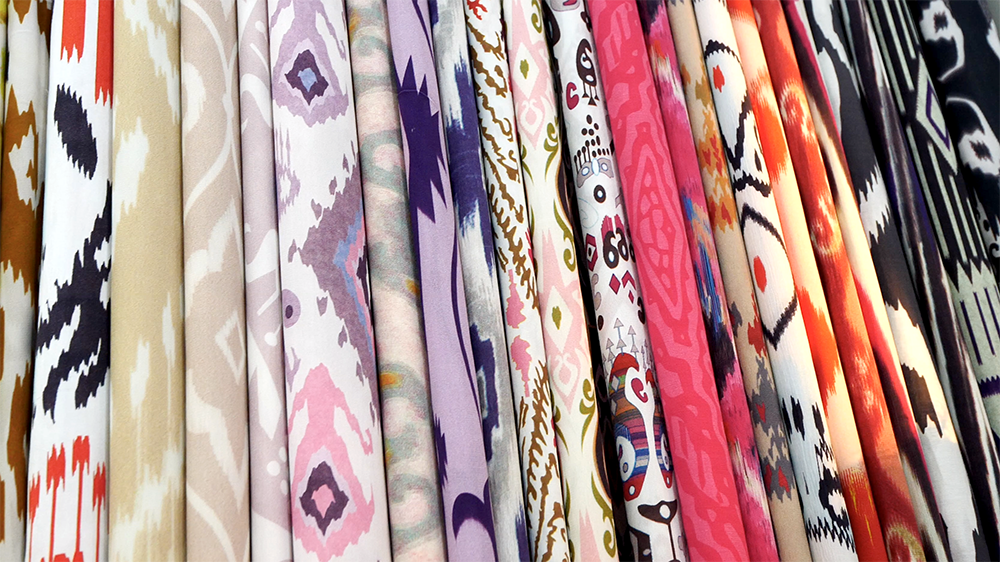 They don’t weave silk products at this factory, but they do have a shop you can visit. This factory sends their silk to other shops to produce products, which are sent back here to be sold. They have lots of things in the shop, but most of them are for women. Among the products sold there were many beautiful scarves, which only cost about 100,000 som each, or about $10 USD. I had never seen silk this affordable before. I bought four of them for my wife!

Check out my VIDEO: Traditional Uzbek Food + Tour of the Holiest City in Uzbekistan | Bukhara, Uzbekistan

Then, we headed to dinner. The temperature had easily dropped more than 20 degrees now that the sun had gone down. It’s always like that in the desert. The days are scorching while the nights are really cold. 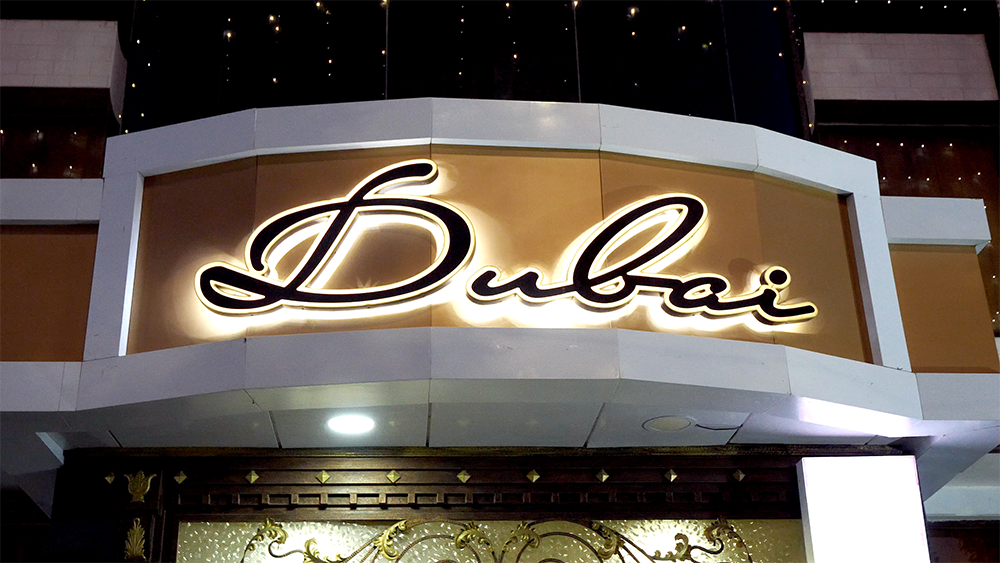 We arrived at Restaurant Dubai, which sells lots of different cuisines, but I only wanted Uzbek food. This country is all about local restaurants, so they don’t have street food here. The building was beautiful and there was even a terrace upstairs. I was ready to eat some exotic Uzbekistan food! 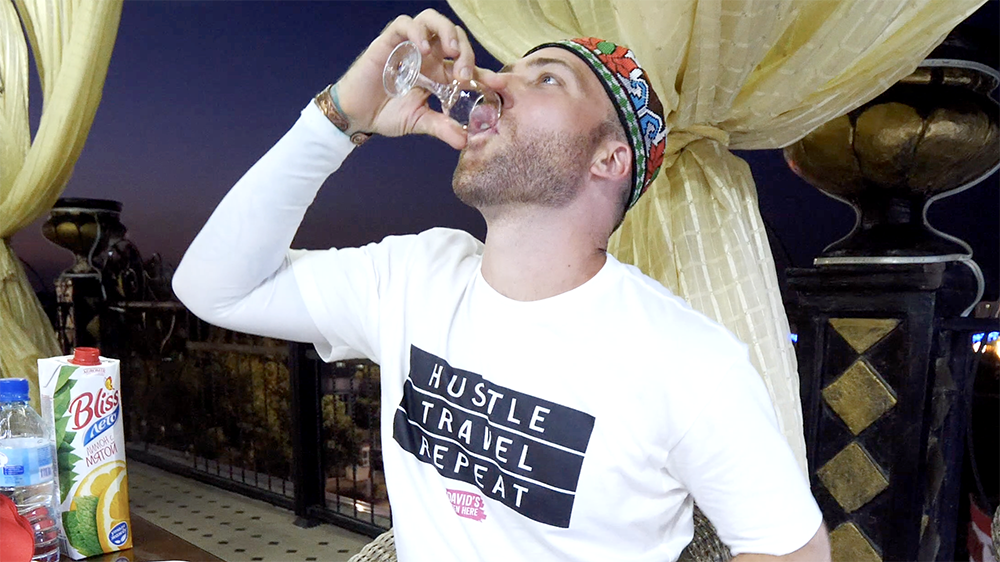 We went up to the terrace and started with some Uzbek vodka. Then, we got some different soups, salads, and breads. I had some beef with the bread and made a little sandwich out of it. It was ridiculously tender and juicy. I enjoyed a lot of vodka while I ate, as well as some pure watermelon juice! 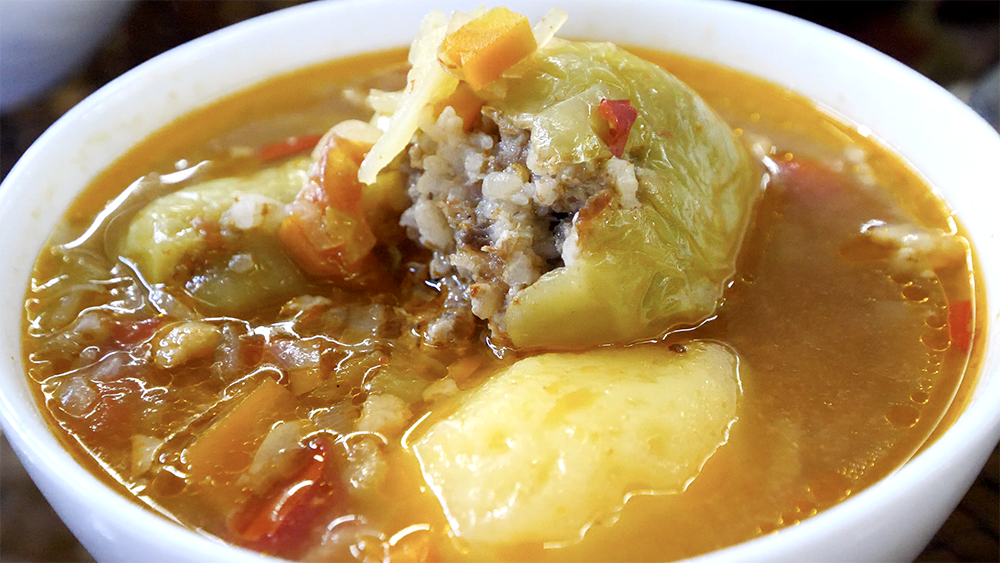 Next, I had a soup called galupsi, which contains sweet peppers stuffed with rice and beef. It was monstrous and so tasty. It was like something from Greece. I loved the rich, flavorful broth, too. The mix of meat and rice was unreal! 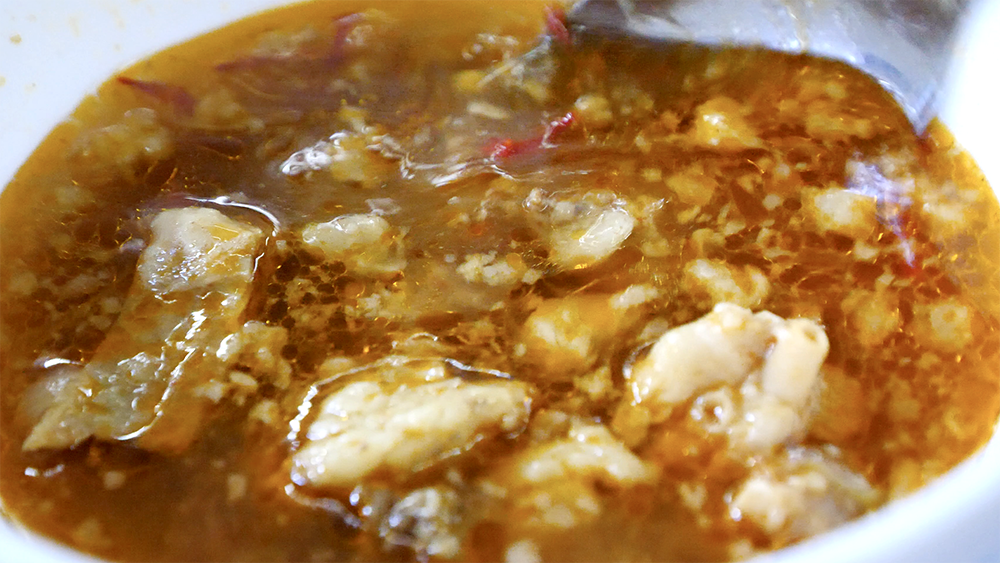 Next was another soup with lots of boiled meat and juicy fat, and small pieces of peppers! The meat boils for 8 hours and has a tasty vegetable broth. The flavor was amazing! It was my favorite Uzbek soup so far. The beef was so mouthwatering.

Then, we got some more Uzbek salads. The first had peas, cucumber, and meat, while the second contained sausage, tomatoes, and more meat. The one with peas was very refreshing and a little oily. It had a small amount of meat in it. The beef, sausage, and tomato salad was also so good! It was a delicious combination. 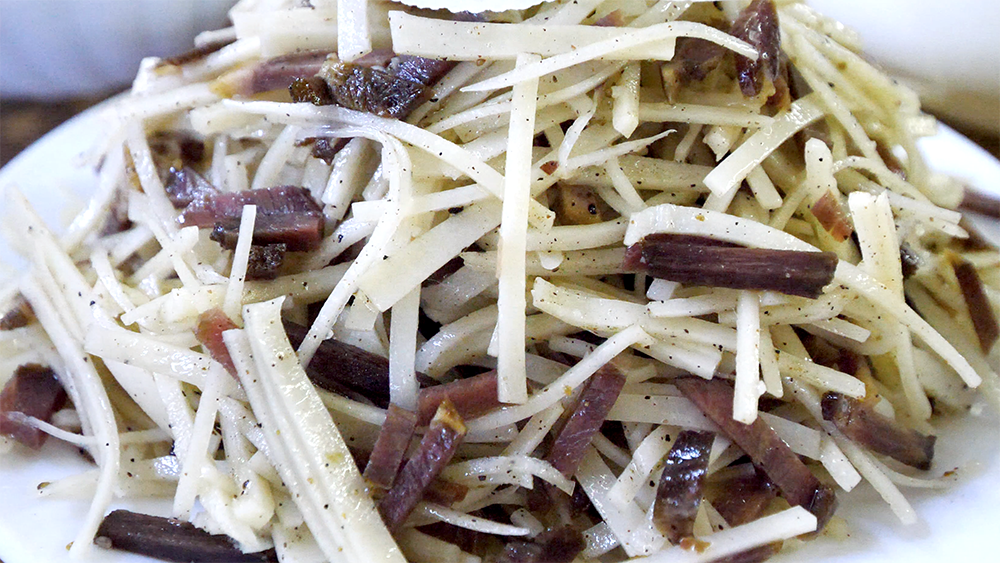 Next was norin, an exotic Uzbekistan food I had originally tried in Tashkent. It consists of horse meat with a wheat pasta. It was too good! The meat was gamy. This pasta tasted more like pasta. The one in Tashkent had tasted more like cheese! I loved it! 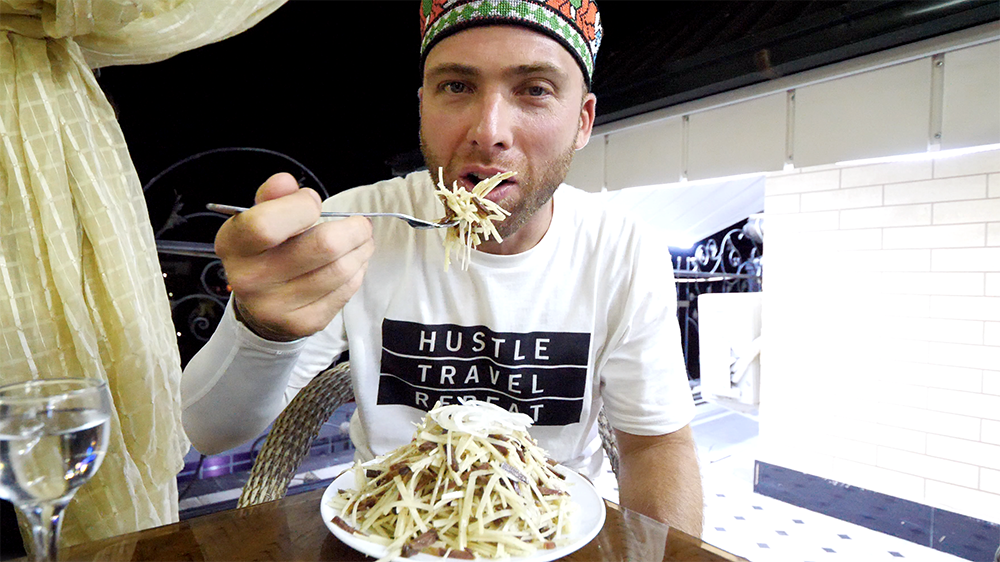 My next dish was chickpeas with tender beef. There was also a nice broth in it and a giant hunk of fat that I had to break up in it. The fat was so amazing! 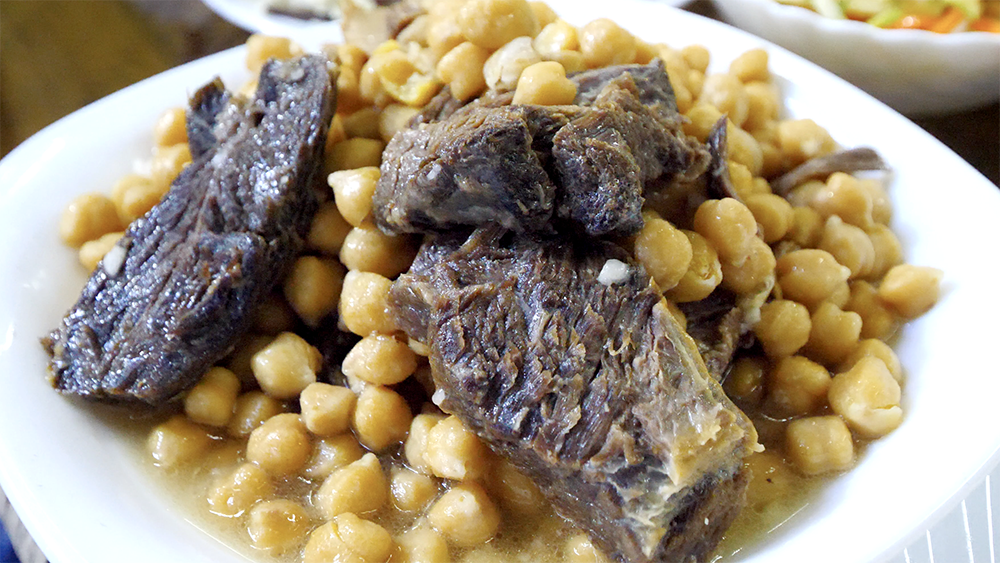 I hope you enjoyed visiting the silk factory and trying exotic Uzbekistan food with me! If you did, please give this video a thumbs up and leave a comment below. Also, please subscribe to my YouTube channel and click the notification bell so you don’t miss any of my upcoming travel/food adventures!