After arriving in the UNESCO World Heritage town of Shahrisabz, I hit the ground running since I only had 12 hours to explore. Come along with me as I go on an incredible UNESCO sites tour in Shahrisabz and find myself in Uzbek meat heaven in a Caravanserai in Uzbekistan! 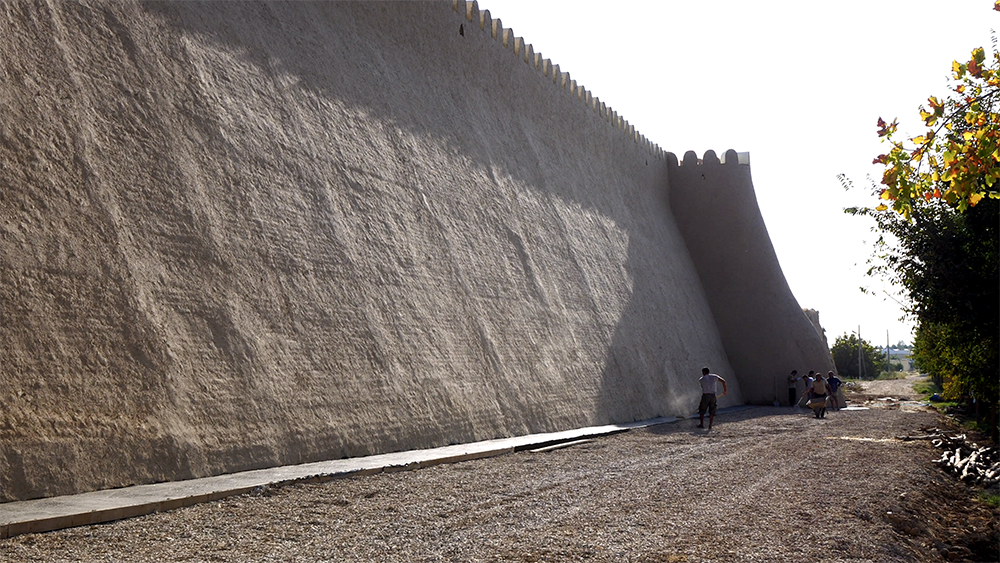 I started my afternoon right outside the city walls in front of the gate leading into the town. Shahrisabz is best known as the birthplace of Amir Timur, also known as Tamerlane. Timur founded the Timurid Empire and was the king of what is now Uzbekistan. The wall surrounds the old city, though the gate and parts of the wall have been completely renovated. 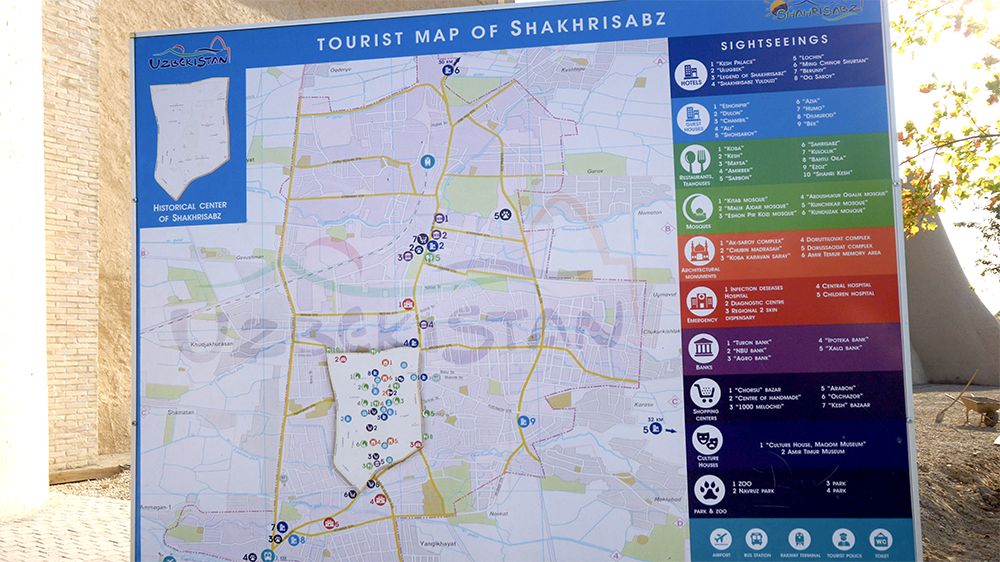 Outside the gate is a map that shows all the historical gates within the walled area of Shahrisabz. There are mosques, palaces, mausoleums, and tombs inside the walled city!

My UNESCO sites tour in Shahrisabz began at OQ Saroy Majmuasi Complex. It’s a huge gate with lots of beautiful tilework and Arabic writing from the Koran on it. There are lots of blue tilework. Even partly destroyed, it’s huge. It’s 32 meters tall. It used to be two times bigger! Much of the gate is in ruins, but it’s still pretty well-preserved. It seemed to me that it also served as a watchtower where they could look over the entire valley. 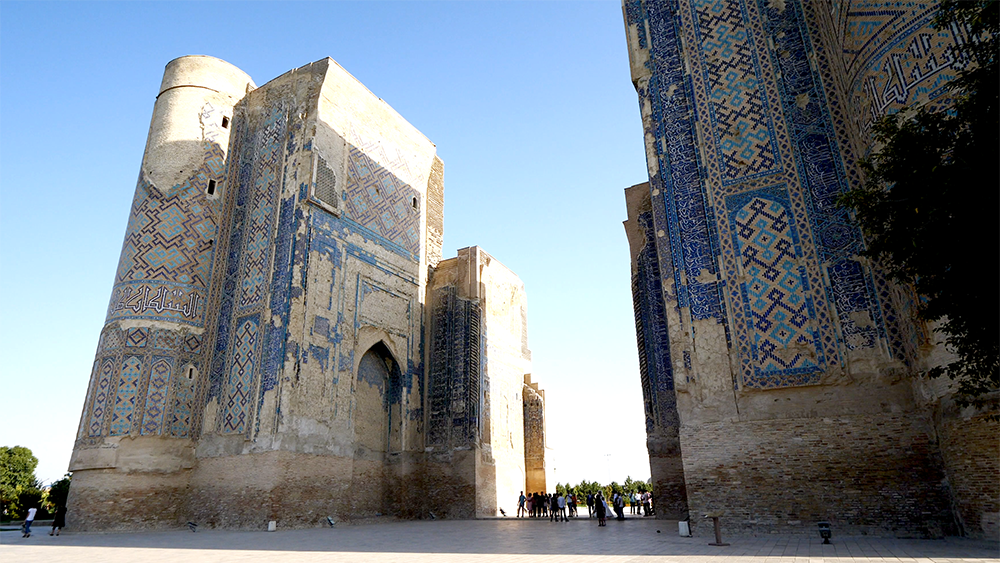 The gate was built in the 14th century and much of the tilework is still intact. While I explored, I met an amazing flute player and even played with him! 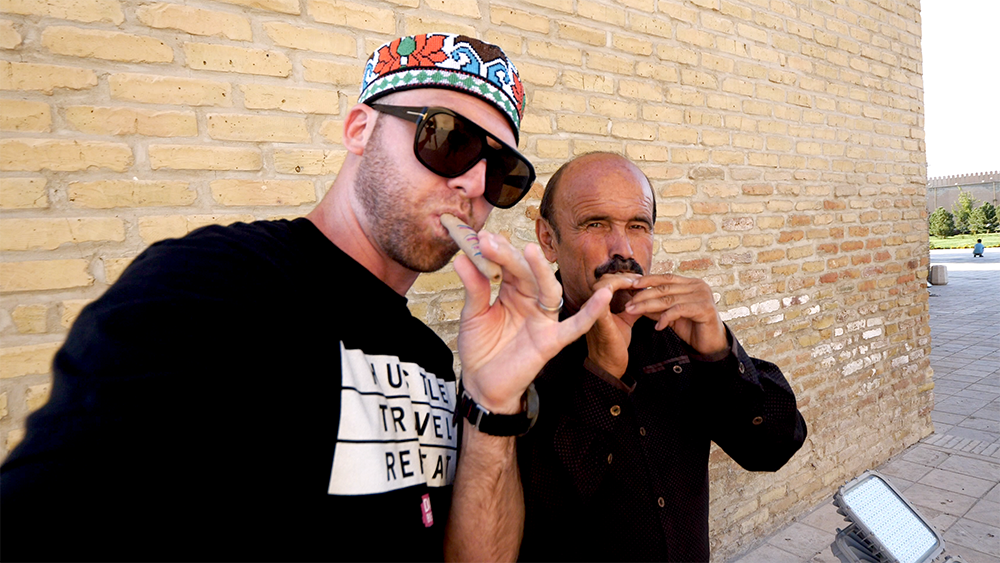 We moved on to a statue of Amir Timur, which was constructed in 1996, on the 660th anniversary of his birth. Past that is a spotless path where there were gardens, flowers, and lots of kids playing. Nearby is the Museum of Amir Timur and the Koba Caravanserai. The Koba Caravanserai is where people would stay. It was centrally located near a mosque and crafts bazaar. It’s been converted into a restaurant. It’s really beautiful and is well-insulated! It was nice and cool inside despite the oppressive heat outside. 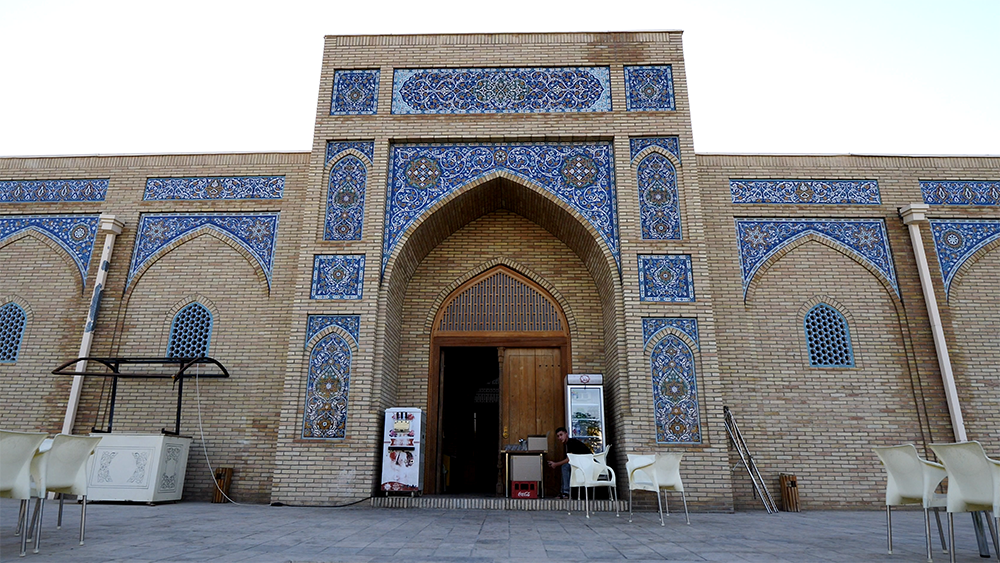 Back outside, I visited Abdushukur Agalik Mosque, which has 12 unique pillars. It’s right outside the Koba Caravanserai. I loved the blue and green colors on it. The pillars had been restored and there was beautiful white marble on the building.

Next, we saw the Chorsu Complex, which was a crafts bazaar. It’s really small compared to ones I’d visited in Tashkent and Samarkand. It’s also located near the Caravanserai. I could see the difference between the old and new bricks and the old and new cement between them. 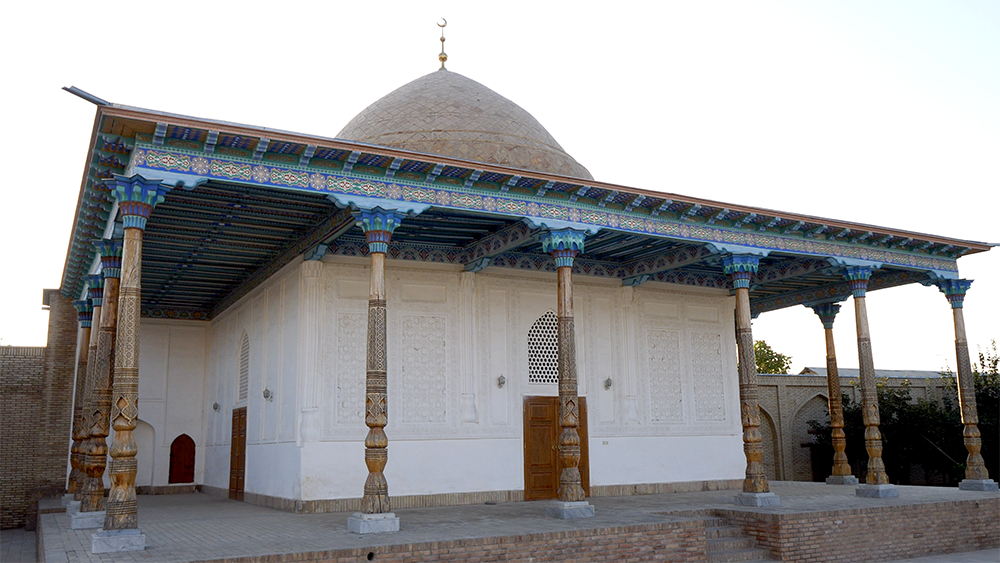 Then, we visited the Kok Gumbaz Mosque, which has the largest dome in Uzbekistan. Amir Timur’s grandson built it in the 14th century. It’s a massive structure and is the biggest mosque in the city. I hadn’t seen a dome like this yet. The entrance was similar to the one in Samarkand. It was so impressive. The only place you can see architecture like this is in Central Asia! 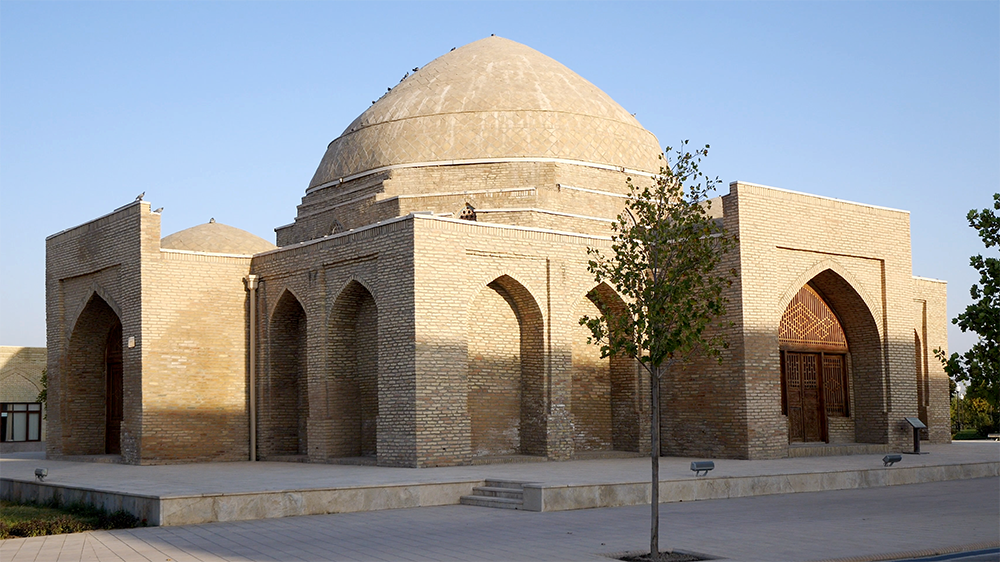 Inside, it was a masterpiece. There were lots of stars on the walls and ceiling. Throughout the mosque, you see lots of trees, stars, blue, white, and orange, which depict energy. There were lots of different painted designs, but they were all similar. They’re all 500 years old! 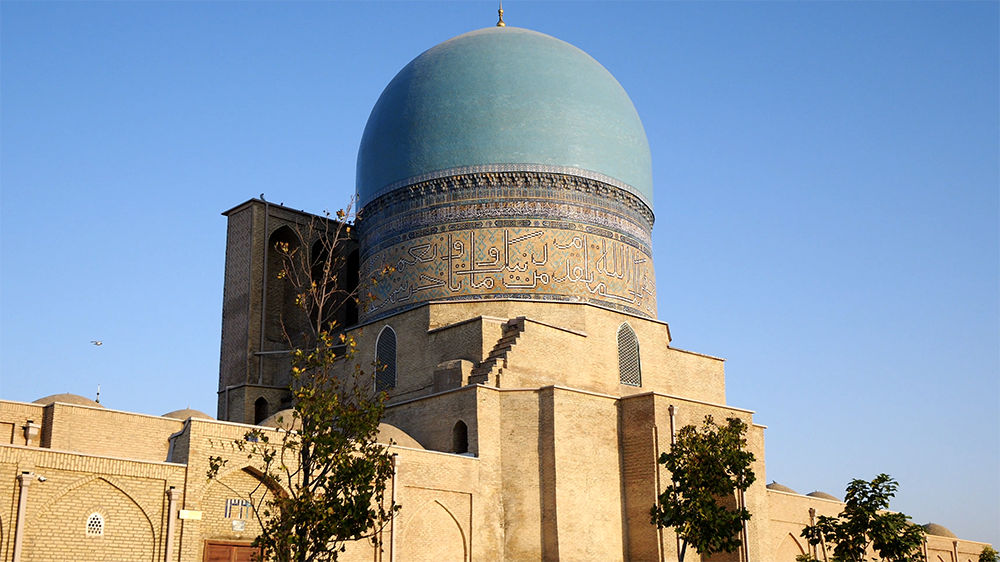 My UNESCO sites tour of Shahrisabz continued at the crypt inside the mosque. The crypt is for Amir Timur’s mentor, Shayx Shamsiddin Kulol. It was a beautiful marble tomb with writing from the Koran written around it. There were a lot more white, blue, and stars on the walls around us. Even though it was 500 years old, it looked like it had been painted yesterday! 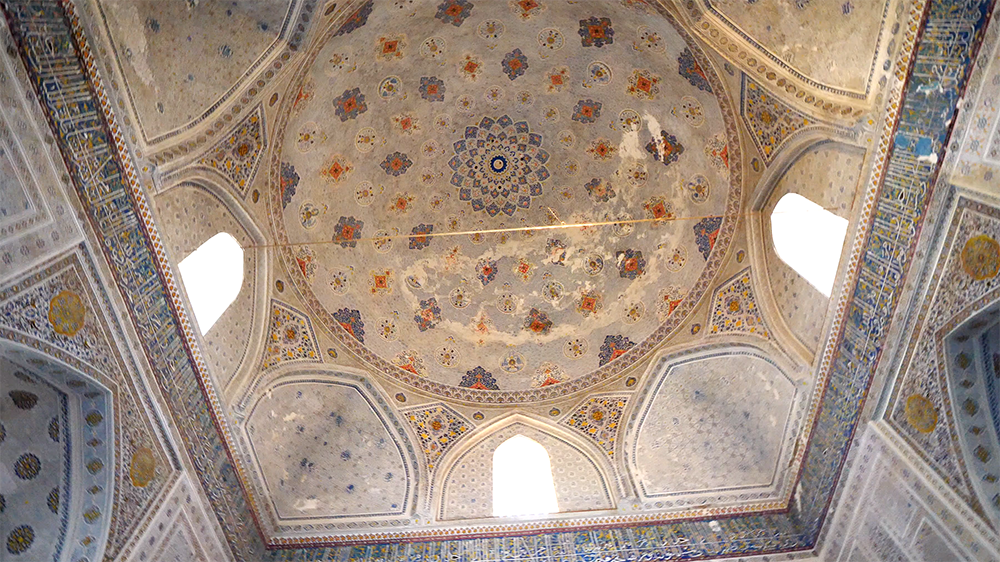 Amir Timur’s son’s tomb is located at the Dorus-Saodat Mausoleum Complex. It was meant to be for Timur’s family, but only his son is there. A lot of his family is buried in Samarkand. Most of the tilework has fallen, and his tomb is very plain. I liked the inscription on his tomb!

We doubled back to the Koba Caravanserai for dinner. I went with the Koba salad (a beef salad), some soup and kebabs, fried dumplings, and a grilled kebabs. We also got some Uzbek wine. The wine was really fruity! 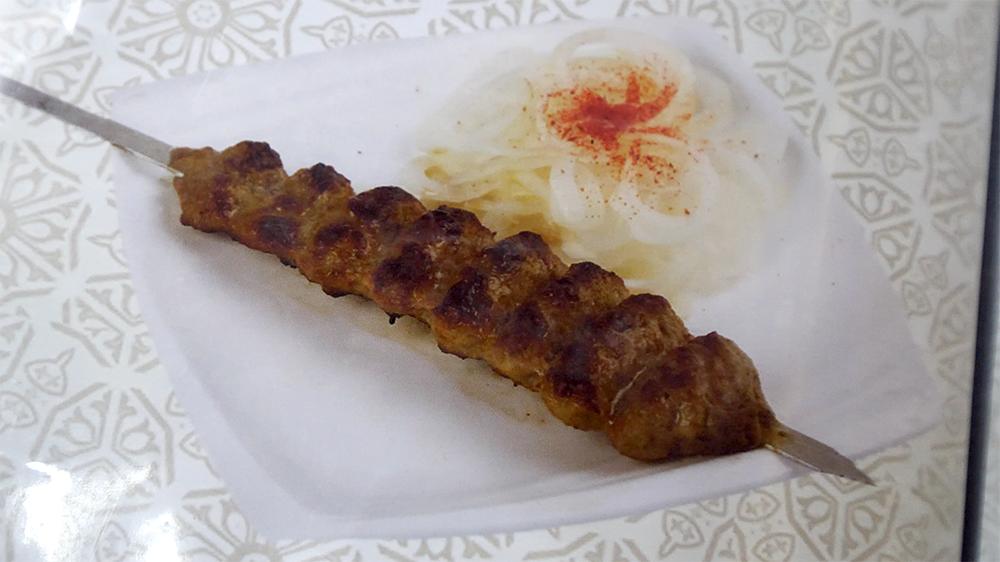 The beef kebabs were amazing and so juicy! I couldn’t get enough of them! Uzbek kebabs are right up there with Indian kebabs! 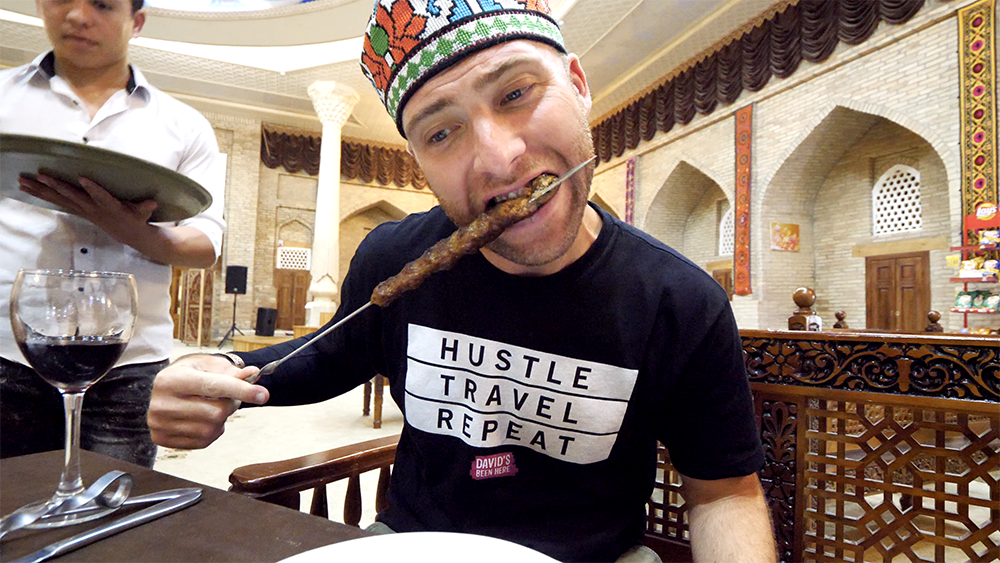 Next, I went with the beef salad, which had cucumbers, sesame seeds, tomatoes, carrots, beef, and balsamic vinegar in it. It was so oily and refreshing! The sesame was the best part about it! 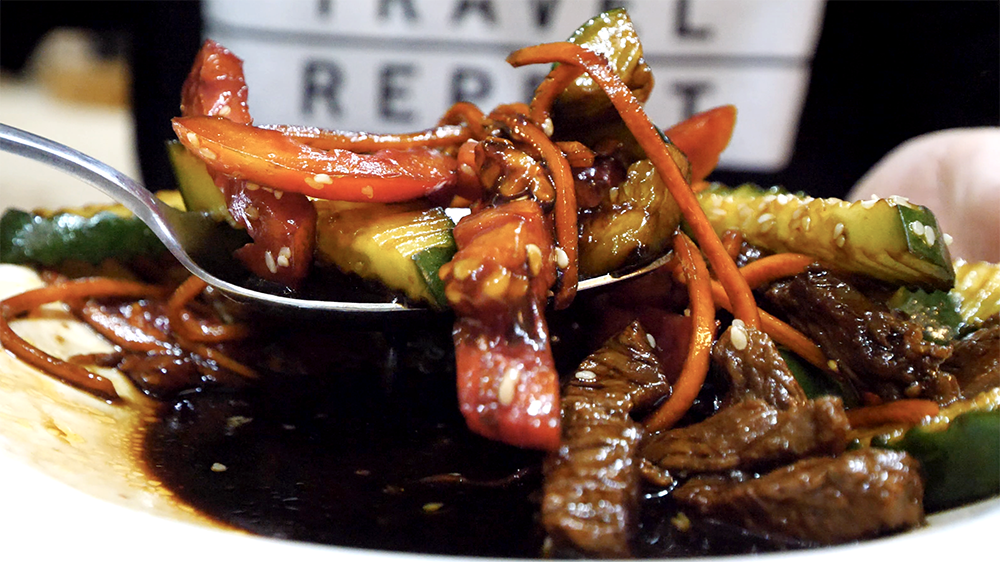 Then, I dove into the chicken, rice, potato, and carrot soup. Everything had been diced finely. Next were two beef dishes. The first one was oily and a little fatty. The second was ribs and was so fatty! The meat and fat were such an interesting and tasty contrast! 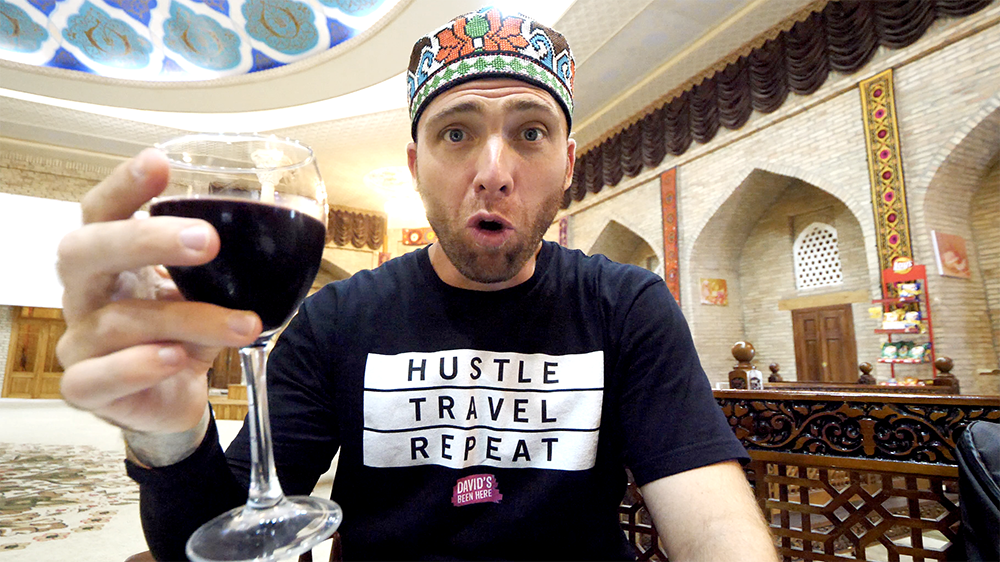 I hope you enjoyed going on this UNESCO sites tour in Shahrisabz with me! If you did, please give this video a thumbs up and leave a comment below. Also, please subscribe to my YouTube channel and click the notification bell so you don’t miss any of my upcoming travel/food adventures!