After arriving in the historic UNESCO World Heritage City of Khiva, Uzbekistan, I hit the ground running to explore this ancient walled city. Come along with me as I try some delicious Uzbek dishes and set out to start exploring ancient Khiva! 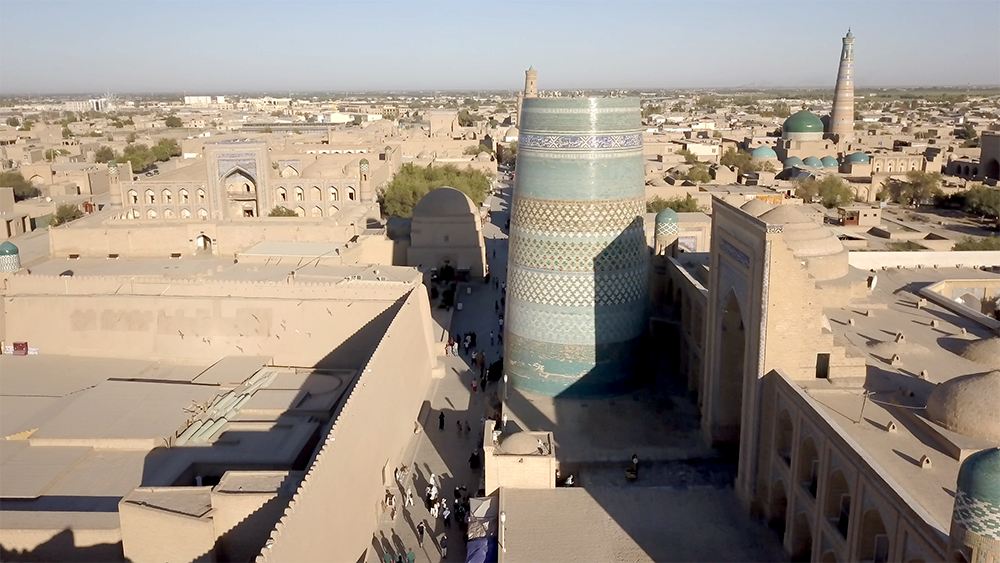 My latest adventure began in Itchan Kala, the walled inner city of Khiva. The walls have 4 gates in them. Its most prominent site is Kalta Minor, a turquoise minaret that’s only half-finished! 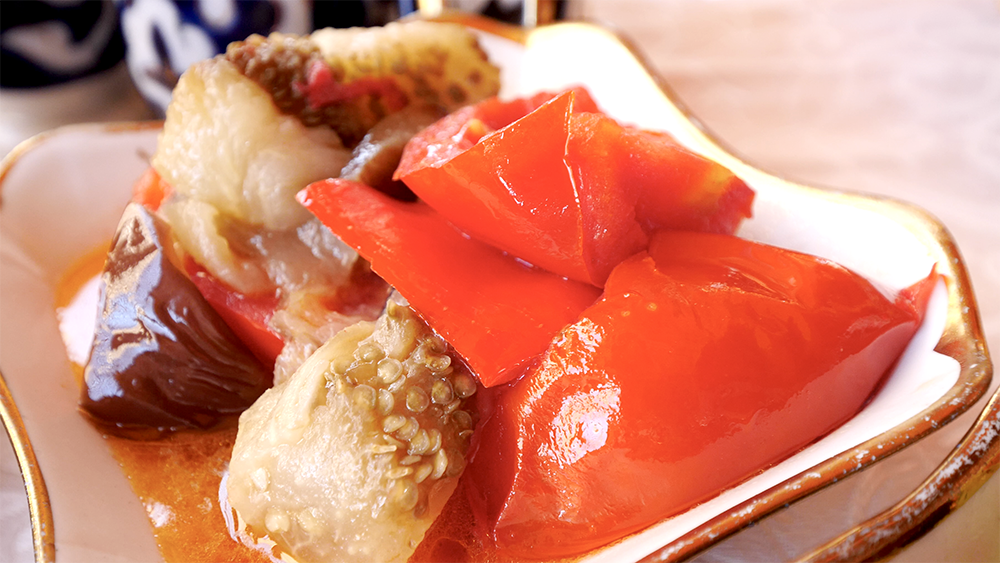 I headed to Yasavul Boshi Restaurant where I had some soft, layered Uzbek bread with 3 salads with tomatoes and cucumber, tomato and eggplant, and eggplant and carrot. There were no spices, but they were so tasty. The tomatoes exploded in my mouth!

Then I had a delicious, pure pumpkin soup and a dish called shivit oshi, made up of green dill noodles with beef, peppers, tomatoes, onions, potatoes, and carrots. It’s served with yogurt so you can make it more of a creamy pasta. It was incredible! 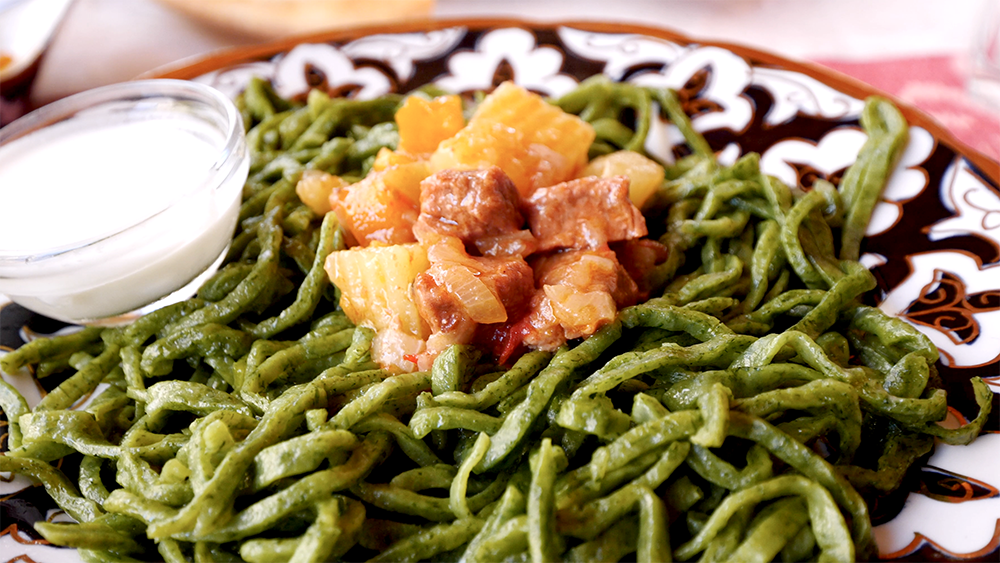 I moved on to 3 types of dumpling called barak, including tukhum-barak, which are ravioli with an egg filling. The noodles, dumplings, and wontons originally came from China via the Silk Road. 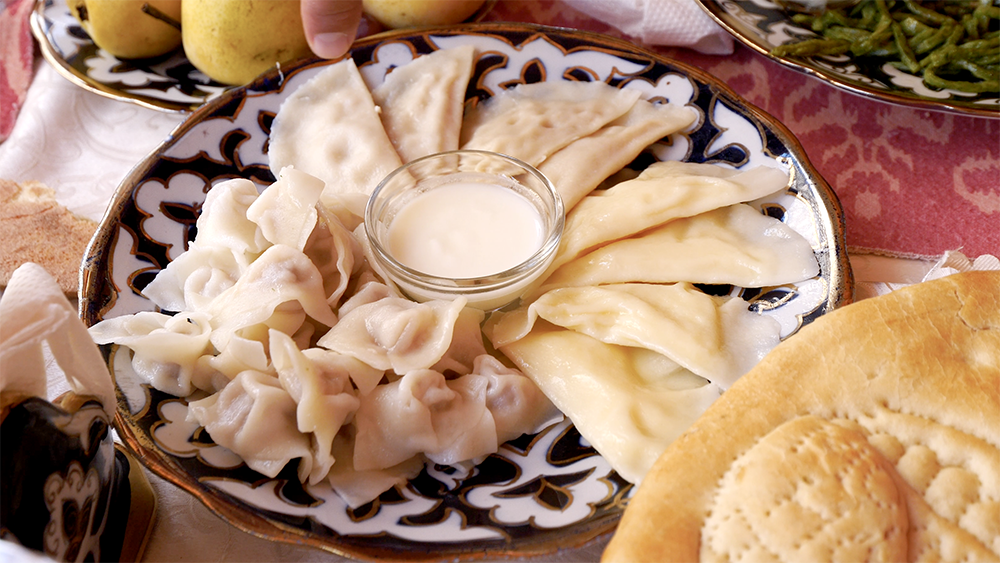 The first beef dumpling was like a Chinese slippery wonton. The tukhum-barak tasted like an Italian ravioli. They were cold, as they’re meant to be eaten during the summer. The beef one was so tender and contained no spices. I loved that it was cold! 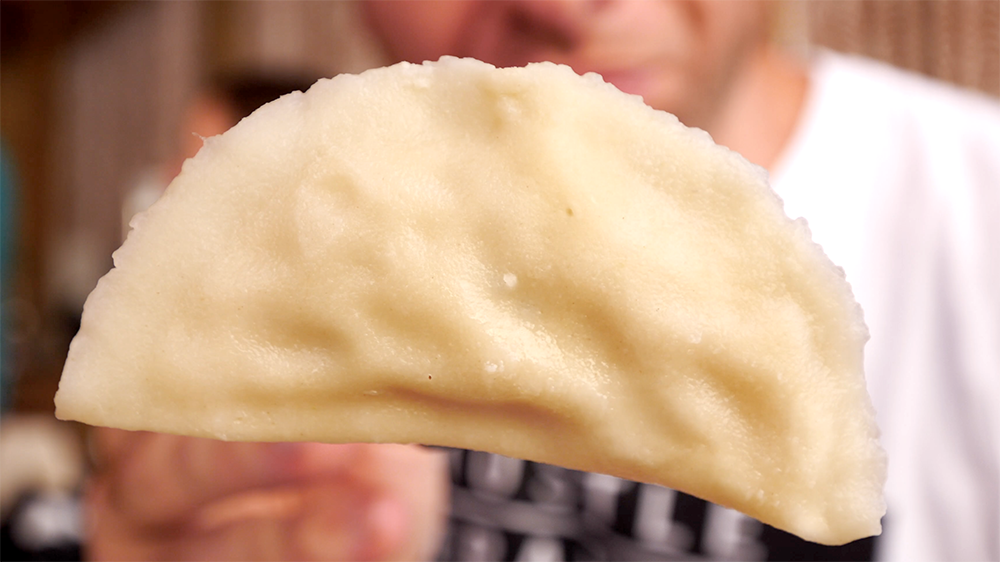 My favorite dish was the shivit oshi! It was like tasting the Silk Road! 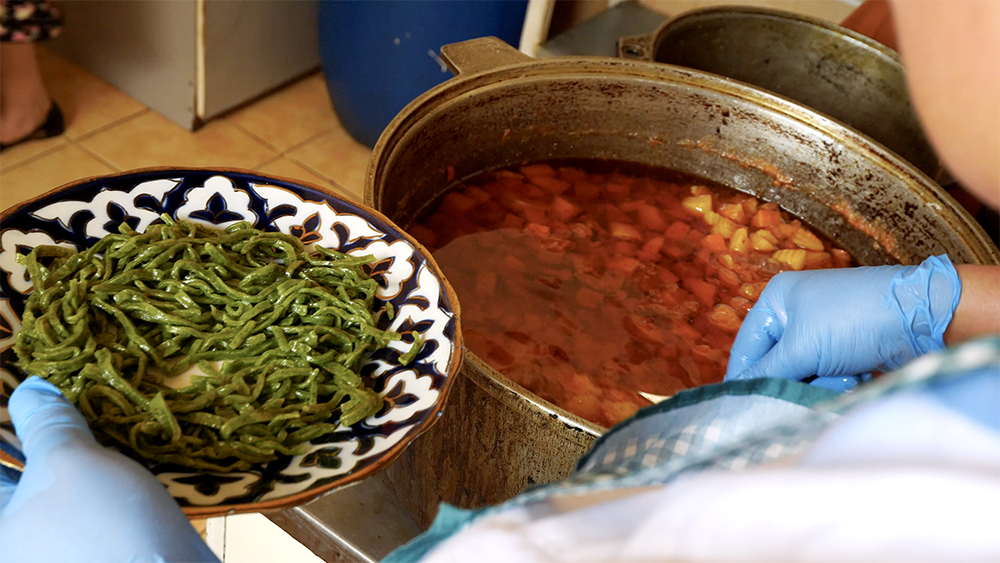 After dropping off our bags at our hotel in the middle of Itchan Kala, I met up with my guide Tulqin in Friendship Square to start exploring ancient Khiva! 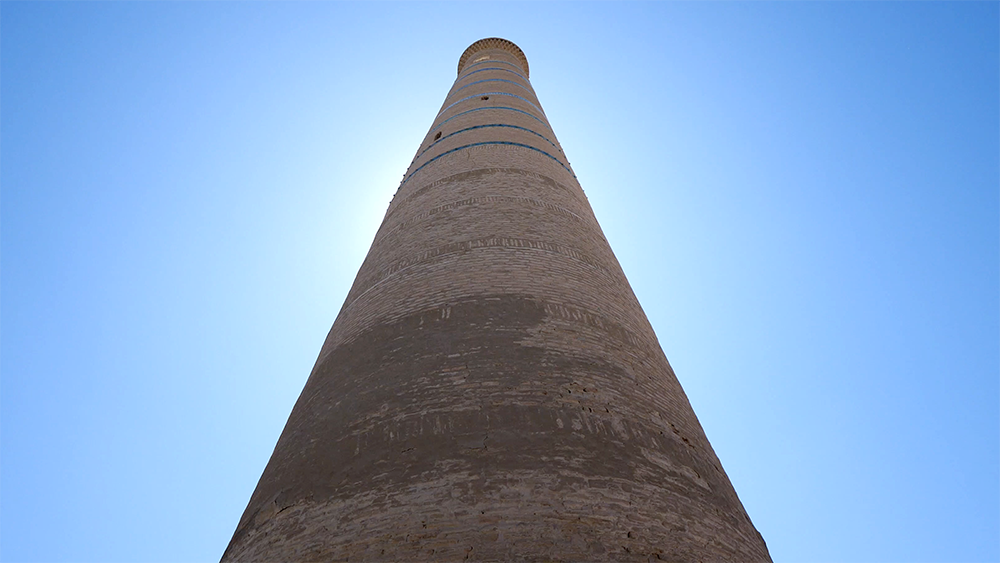 Khiva became the first UNESCO World Heritage City in Central Asia in 1990. The walls are 2.2 km long and 10-20 meters high. The area outside the walls is called Dichan Kala. There are lots of madrasas, mosques, and minarets inside Itchan Kala. 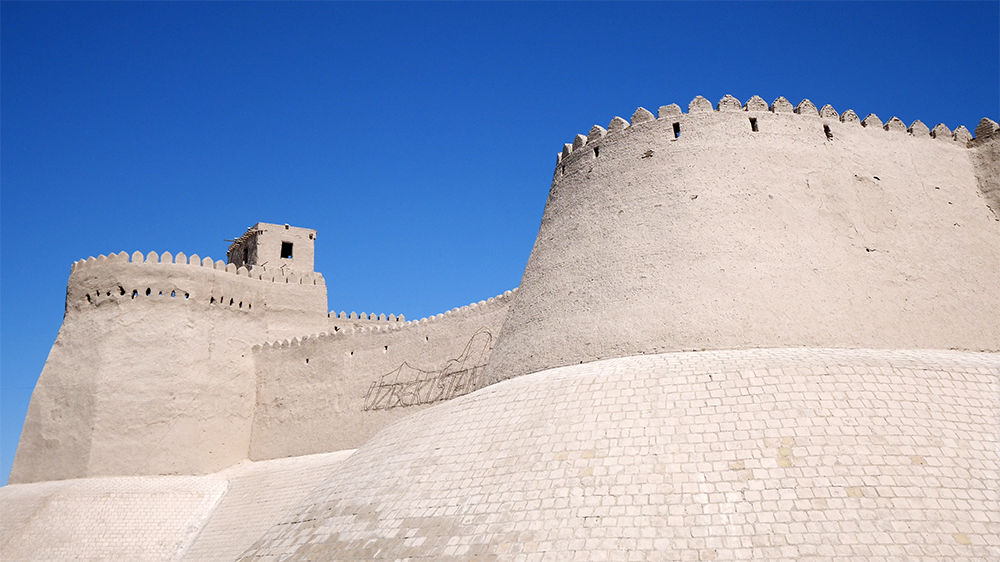 Right inside the gate, I found some beautiful hand-made hats. I negotiated and paid 80,000 som.

We went back to the map of Itchan Kala. There are 54 historical, cultural, and archaeological sites within the walled city! Khiva was a caravan spot along the Silk Road, so people would stop there on their way between Europe and China. 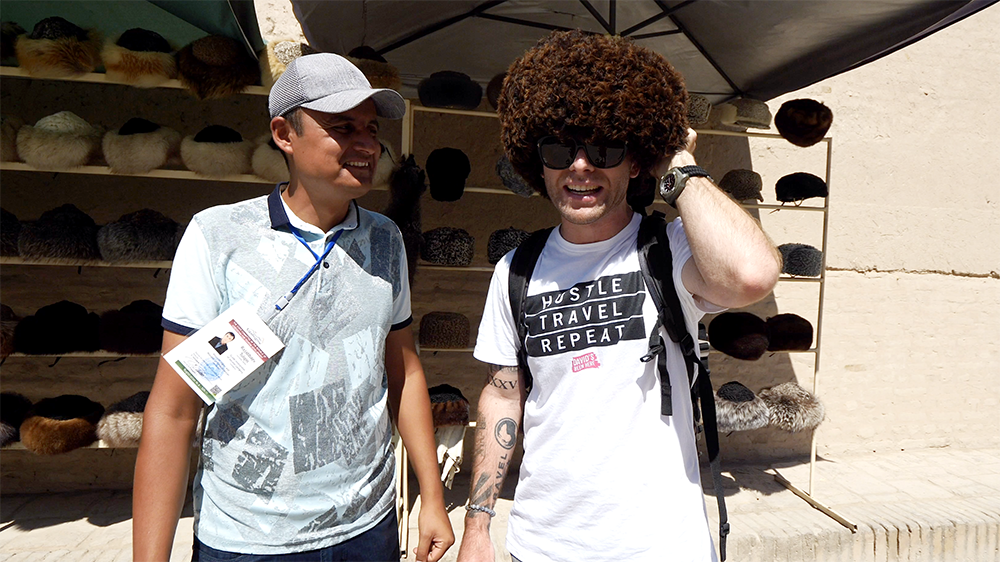 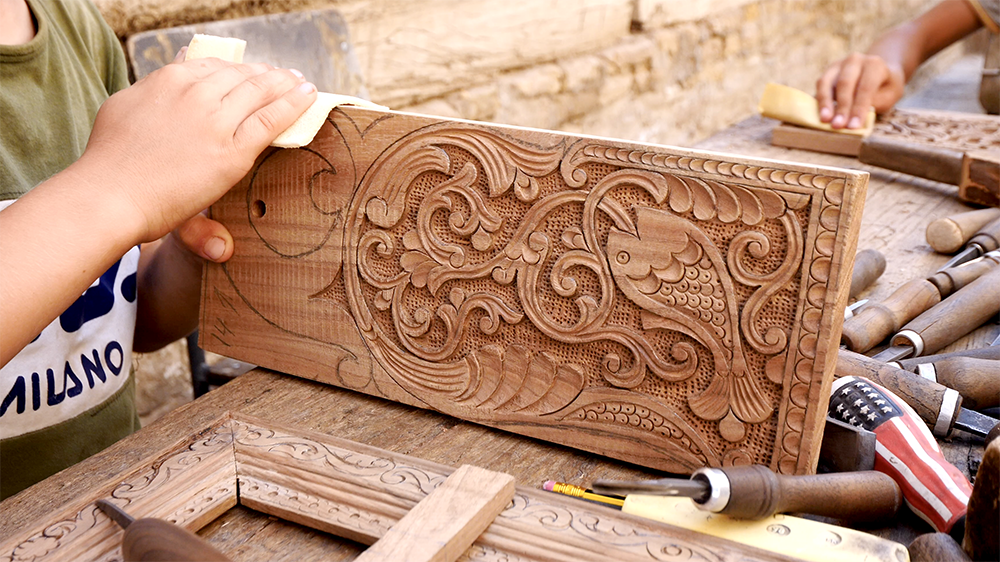 Then we visited a carpet workshop and watched the women weave beautiful silk carpets! Sometimes it takes up to 2 years to make larger carpets! 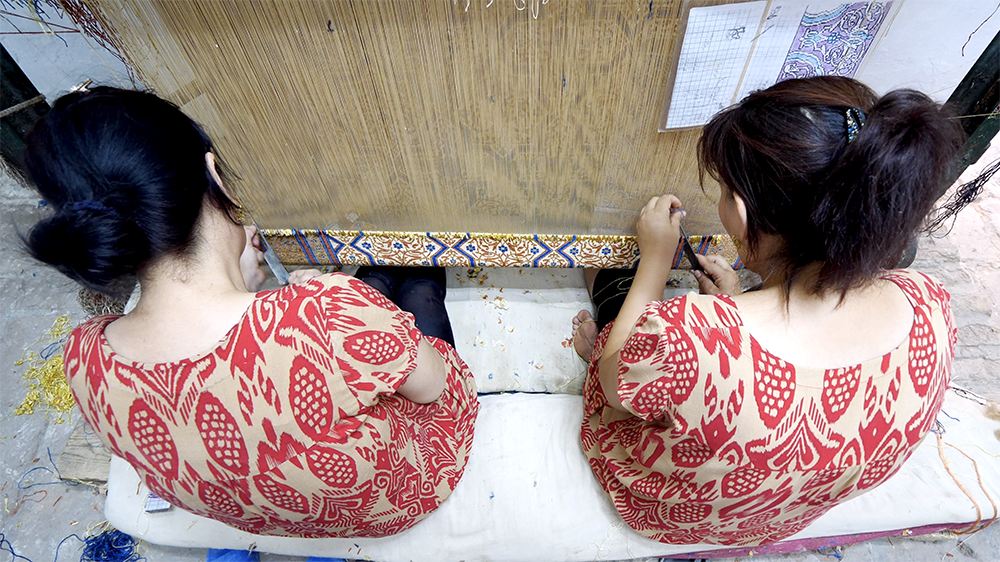 As I continued exploring ancient Khiva, we headed to the tallest minaret in Central Asia, the Islam Khoja Minaret. On the way, I bought a carved stick that protects your house from the devil for 150,000 som. The minaret is carved into the top! 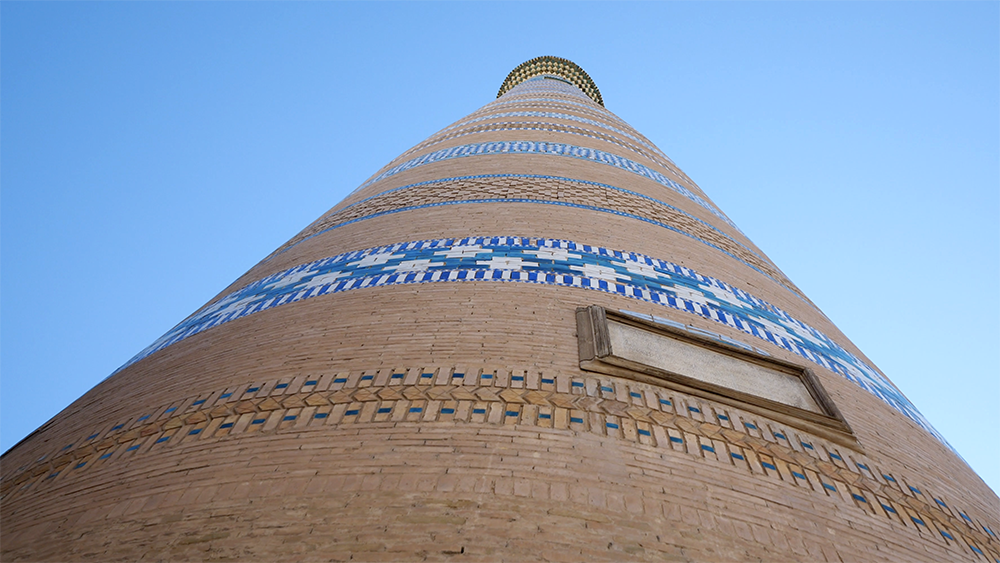 There are 118 steps to get to the top of the minaret. The ceilings are low and the stairs are steep and narrow. It wasn’t easy to get up there! At the top I got incredible views over Khiva. It had the same desert feel of Morocco. Beautiful! 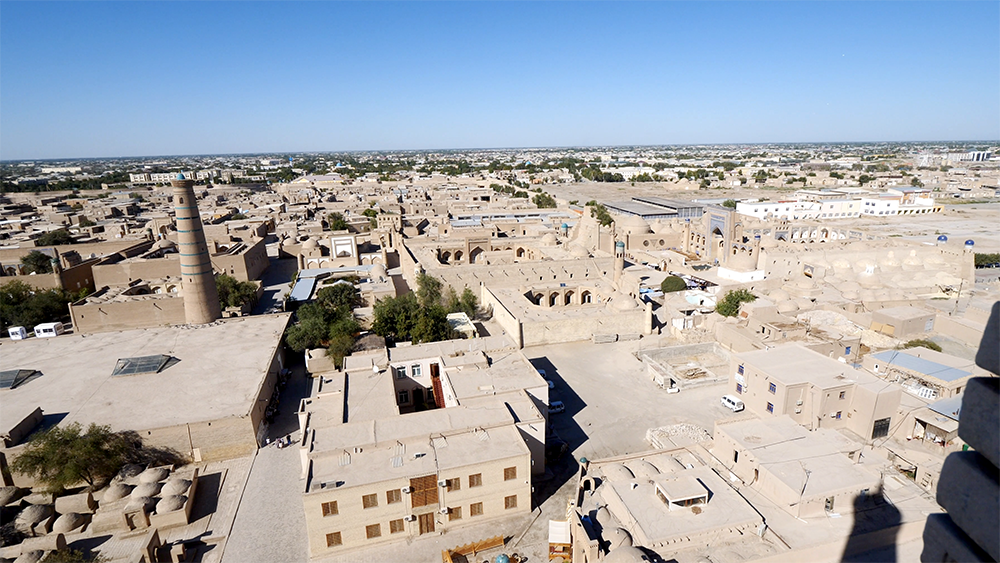 Outside, there was music and people dancing with traditional dolls. We moved on to the biggest mosque in Khiva, which dates back to the 10th century. The room inside has 213 carved pillars!

We followed a 200-year-old road to the new palace. The imprints from the king’s carriage’s wheels are dug into the road. I saw a carriage, which was a gift from the Russian emperor, and the reception of the 19th-century palace. It was made of gorgeous blue tiles. Then, we visited a bazaar with clothing, ceramics, hats, and more! 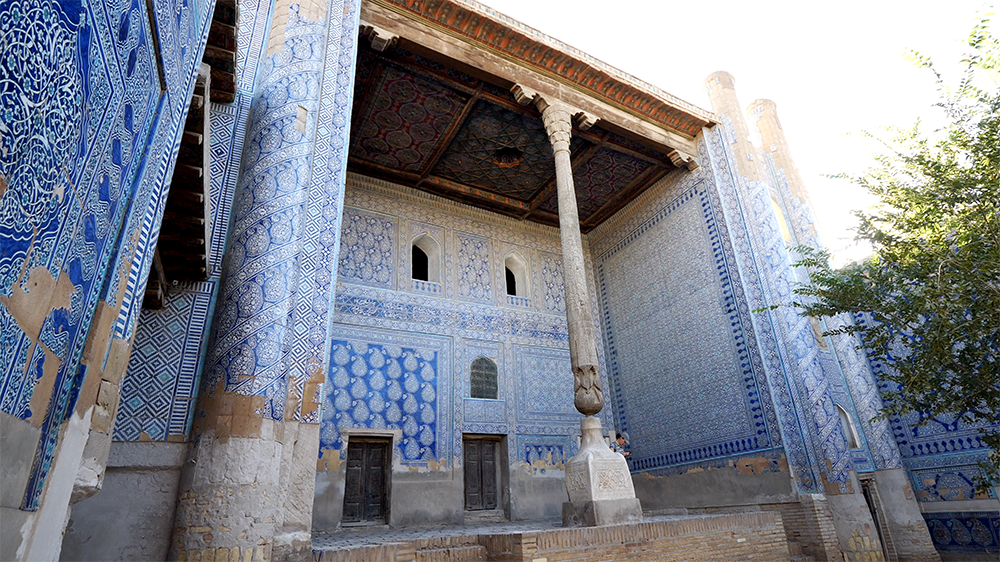 I hope you enjoyed exploring ancient Khiva with me! If you did, please give this video a thumbs up and leave a comment. Also, please subscribe to my YouTube channel so you don’t miss any of my upcoming travel/food adventures!