After exploring the city of Termez in southern Uzbekistan near the Afghan border, I took a day trip to the nearby town of Jarkurgan. There, I did some exploring, had an awesome cultural experience, and ate some of the best lamb of my life! Come along with me as I eat some crispy tandoori lamb in Jarkurgan, Uzbekistan! 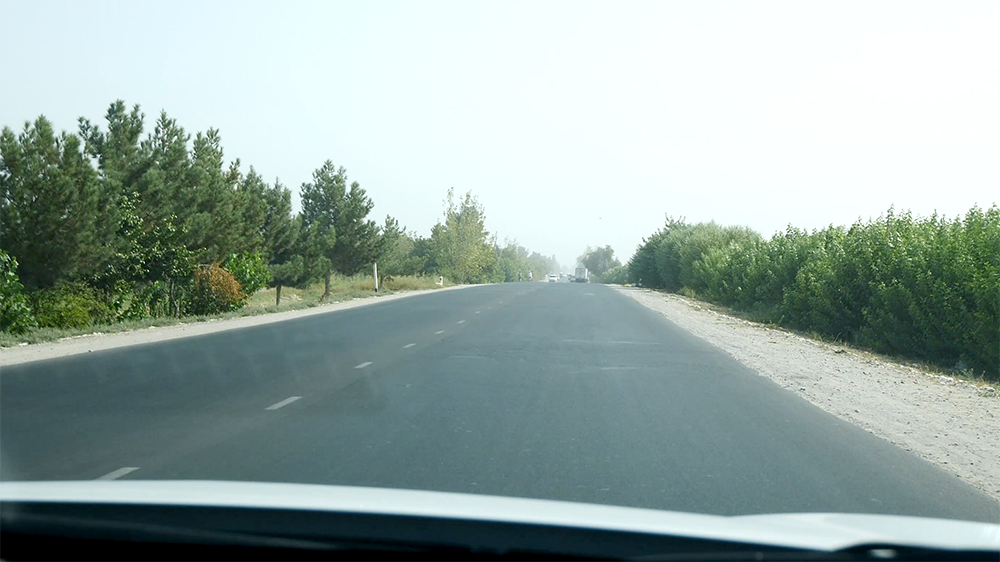 Jarkurgan is located about 30 minutes from Termez. It’s famous for its crafts and food. I started my day at a local crafts center. There, I’d get to see them make crafts and put on a folk music and dance performance! 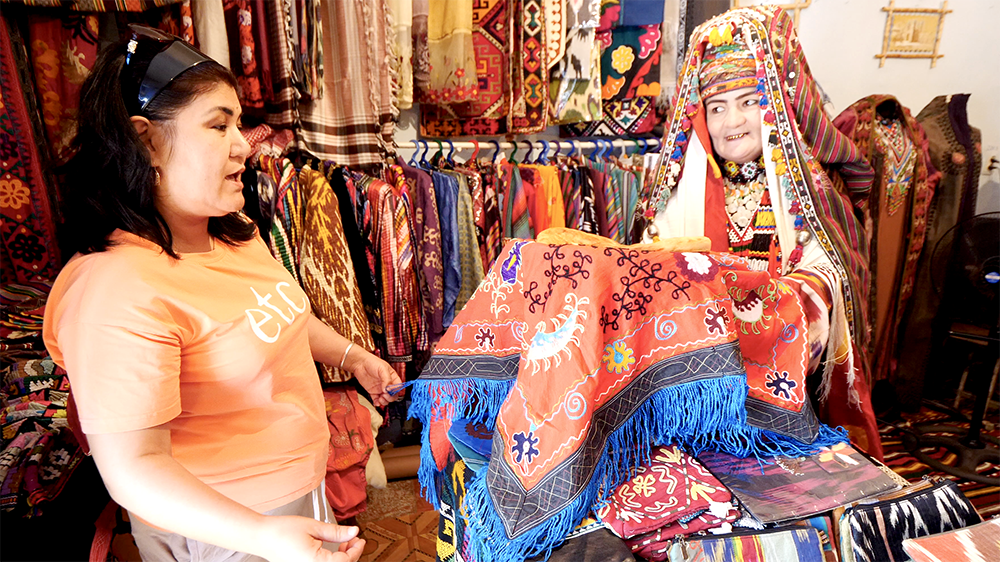 I met up with my guide, who took me to the best place to see embroidery and traditional Uzbek clothing from the region. Inside was a woman decked out in beautiful, colorful Uzbek clothing. She welcomed me with a loaf of bread. It’s how locals would greet a visitor who comes to their home!

Then, the women and man inside sang and played instruments for a ceremony. 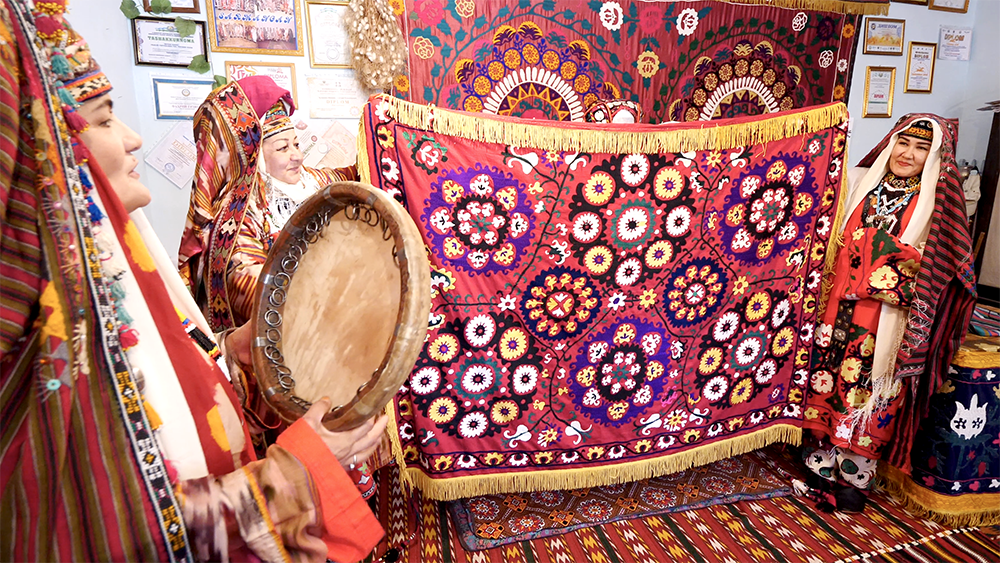 Each woman had different embroidery, necklaces, and headgear on. What they wear denotes where each woman is in life. The woman in white was a bride, while other outfits denoted a married woman, a woman with kids, and older woman, and then the oldest. The embroidery was very different and the necklaces also have different meanings. 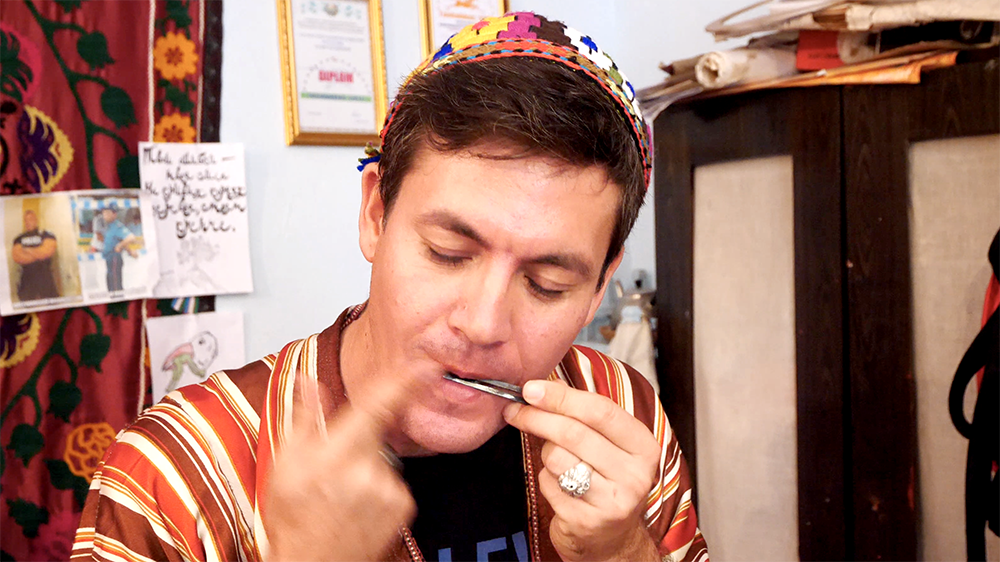 The men wear a specific head wrap. They put one on me, as well as a traditional long shirt, and then taught me how to dance the traditional way. I had a lot of fun learning it! 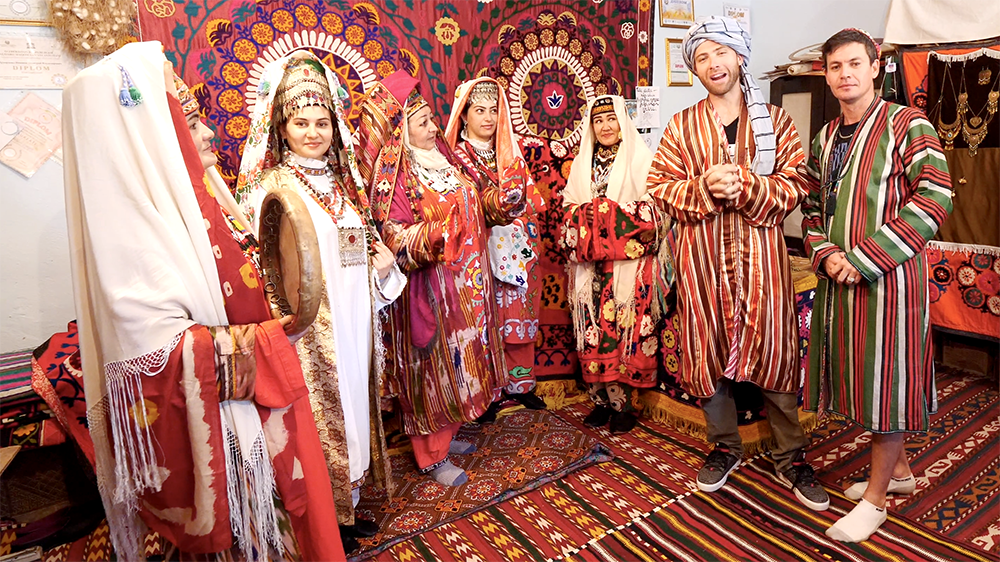 After the show, I suggest buying some of the crafts there as gifts or souvenirs. They have carpets, clothing, and even ornaments for Christmas trees. They produce the material and their students make them at home. I got some for my daughters and my niece! 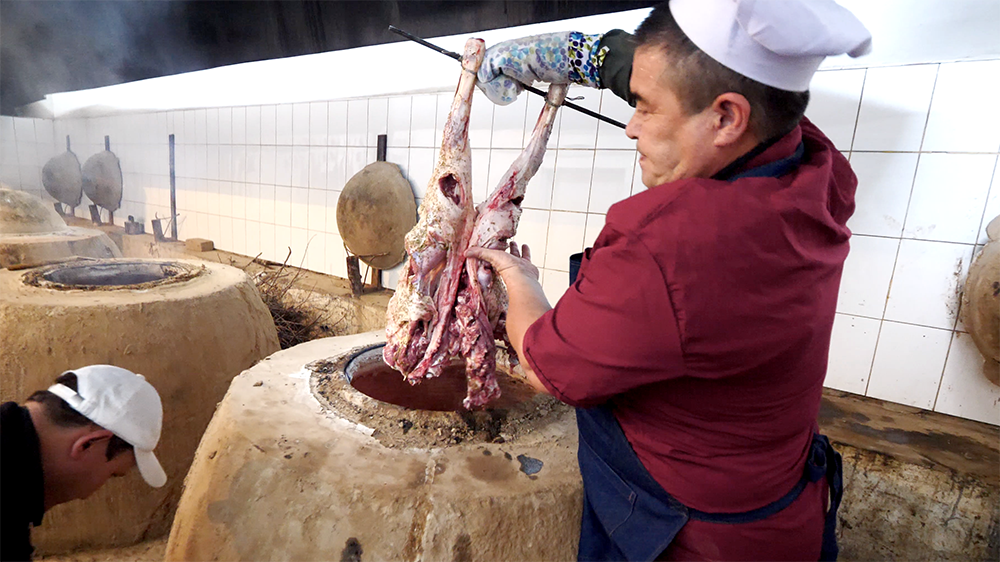 Then, we headed off to see the best crispy tandoori lamb in Jarkurgan! I could smell the lamb as soon as we arrived! They took me to the back, where the tandoor is. They salt the meat and let it sit for 30 minutes. Then, they put the lamb legs inside, followed by a big piece of meat and fat on top. Then, they put on the top, seal it with mud, and let it cook. After 80 minutes, they pull the meat out. 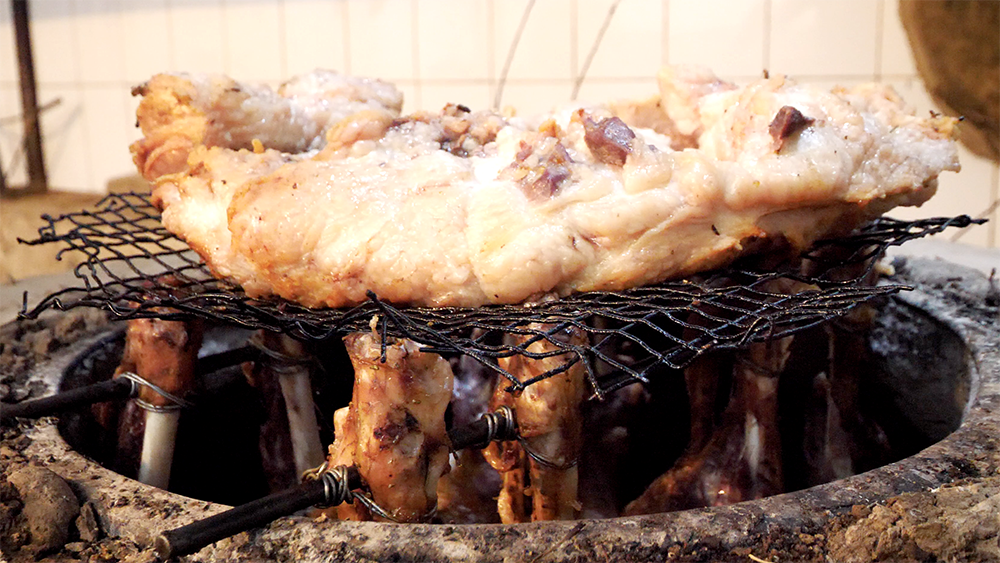 They have a mix of meats: legs, kidney, liver, fat, shoulder. You name it, they have it! They cut it right at the window and the waiters bring it to your table. 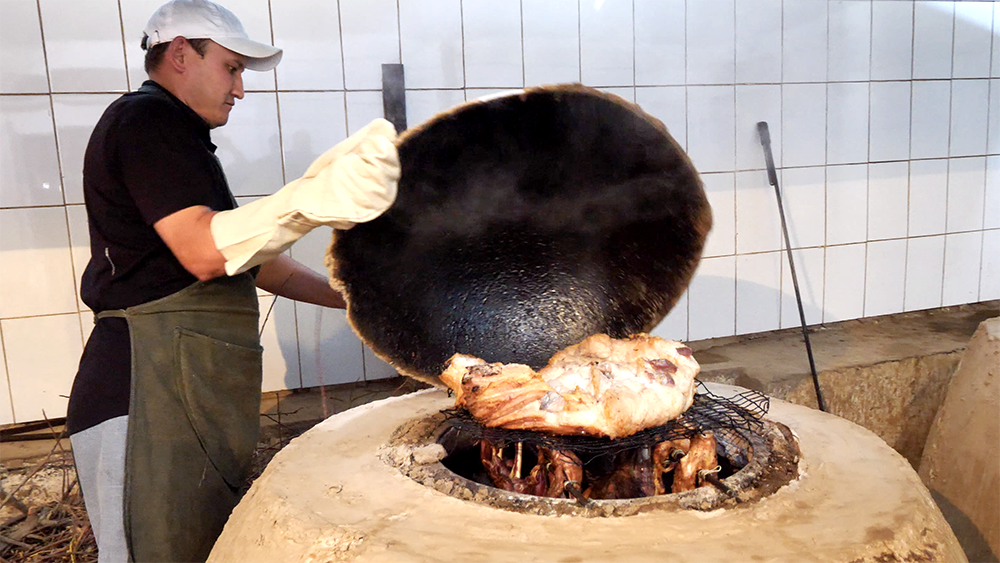 The lamb looked and smelled so unreal!

I started with a traditional Uzbek salad called Achichuk, which contains tomatoes, cucumbers, and onions. There was also some sour cream on the side. I also had some bread with the sour cream, which was more like a thick, sour yogurt. The fresh salad and bread really whet my appetite for the lamb, which I knew would be very gamy! 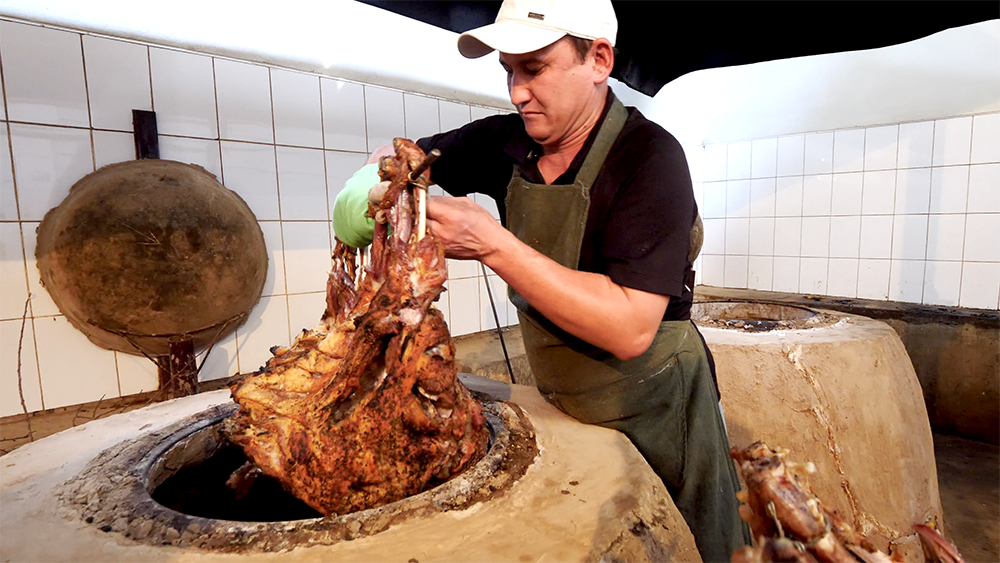 Then our crispy tandoori lamb feast arrived! It consisted of ribs, liver, fat, and much more! You don’t use utensils for this. You just dig right in with your hands! 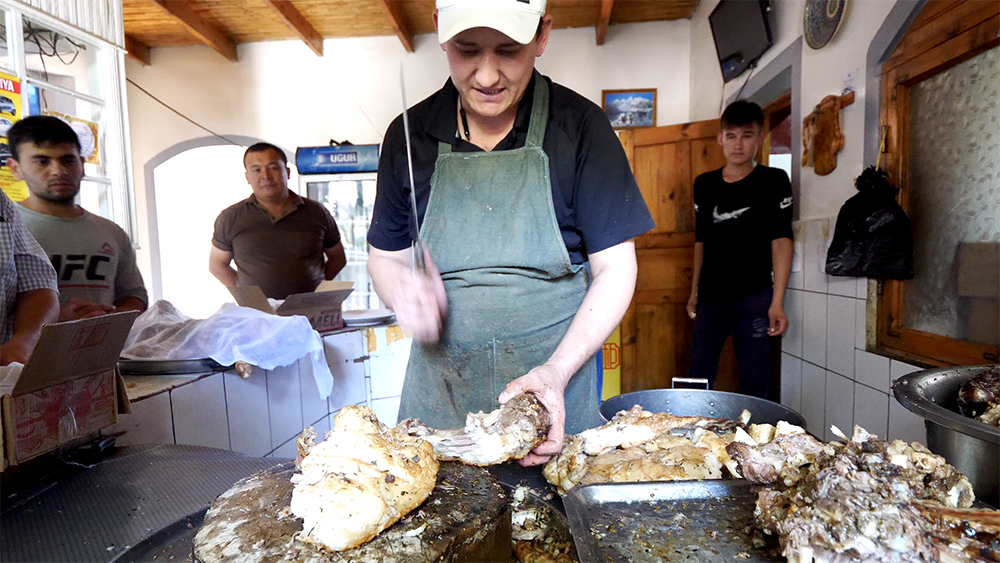 The lamb was so tender that the flesh fell right off the bone! It was the vest lamb rib I’d ever eaten in my life. The lamb had my mouth watering! After the rib, I grabbed a delicious, dense kidney. It’s very similar to liver in terms of flavor. Then, I had the liver, which was out of this world. I fell apart in my mouth! 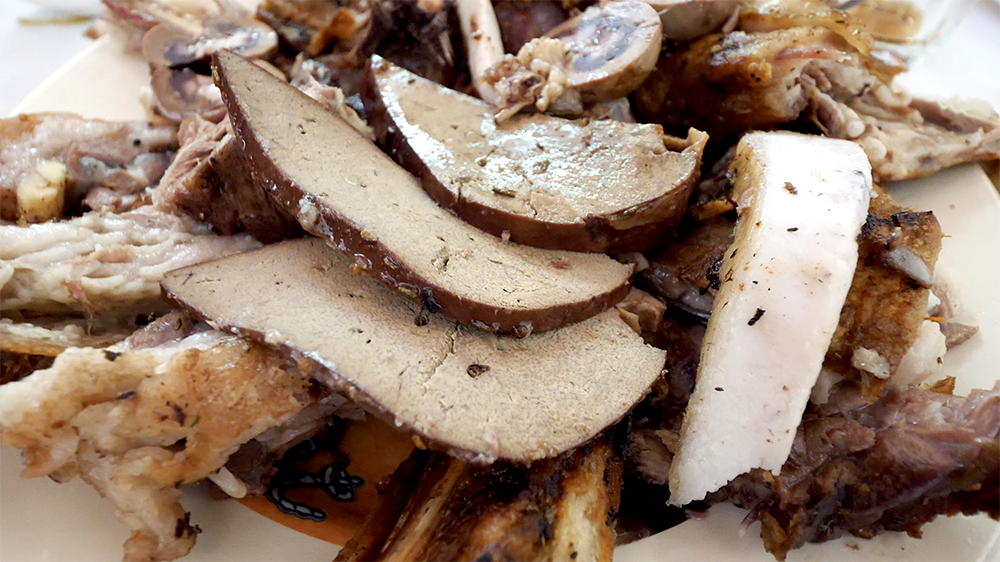 Then, I grabbed some lamb fat and put it in the bread like we do in Italy! The fat was insane. I was in lamb heaven! Then I got a piece that was a nice mix of flesh and fat. Between the gelatinous fat, tender meat, and nice crisp on the outside, I was blown away! The crispiness on the outside tasted like pork rinds! 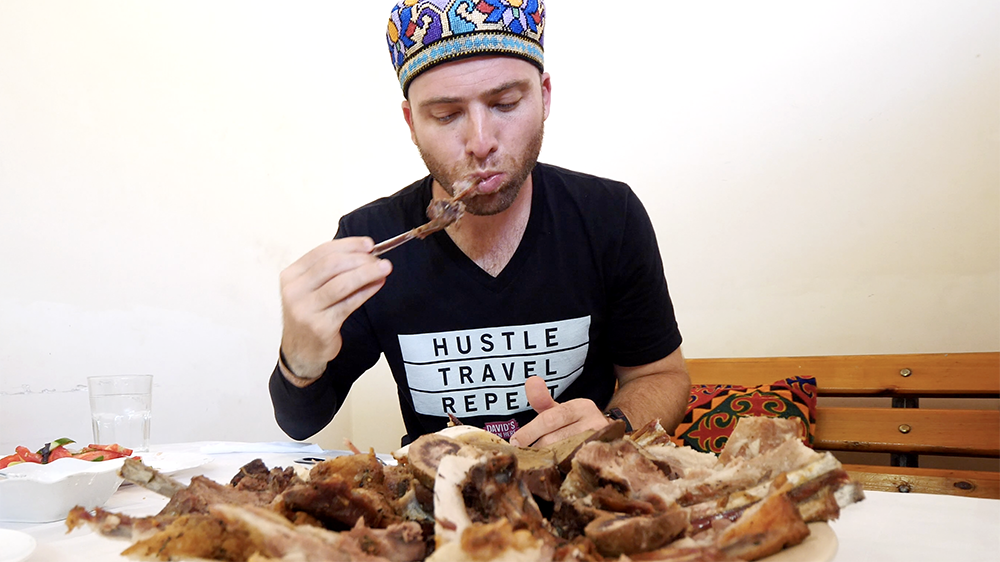 It only cost $11 for one kilo, and we got 2 ½ kilos. What an outstanding crispy tandoori lamb in Jakurgan, Uzbekistan. The organs were my favorite part! The texture on them was unreal!

We finished our meal with some delicious mountain tea, which helps you digest your food. 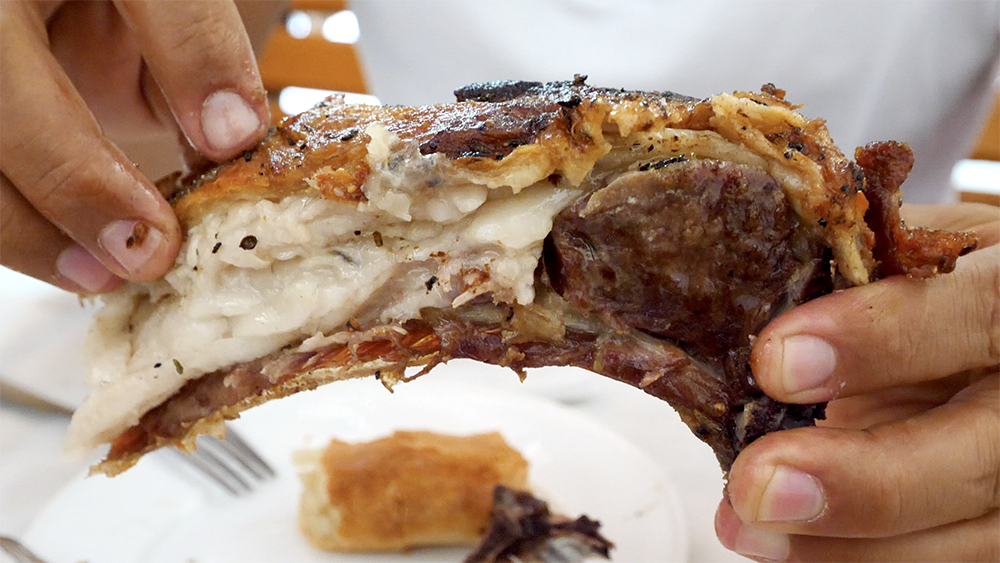 Then, we headed to the oldest minaret in Central Asia, Jarkurgan Minaret. It only took 10 minutes to get there. The minaret is stunning and is 22.5 meters tall. It was built from 1107-1109 and has lots of intricate carvings in it. There used to be a big mosque around it, but it was destroyed. 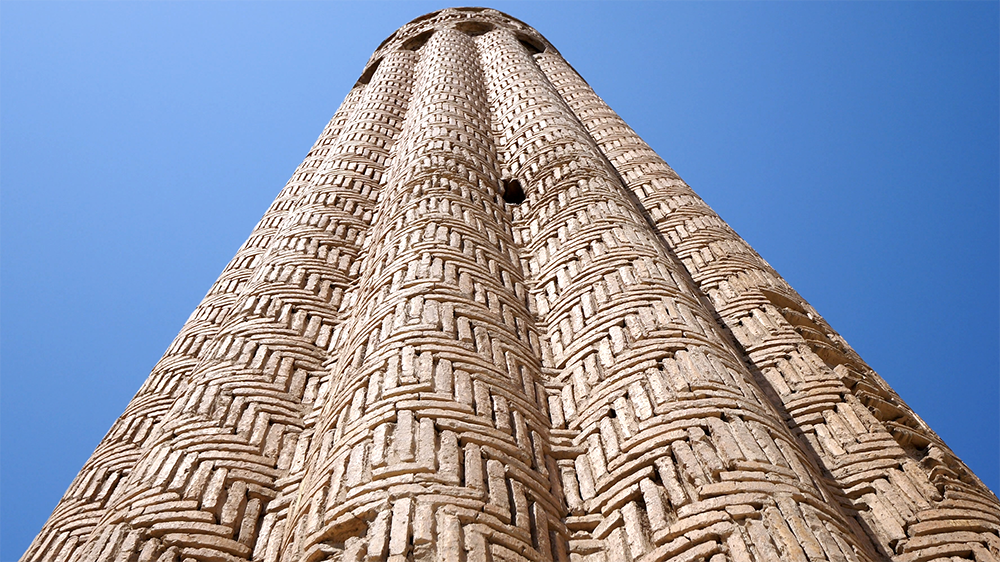 Then, we went inside the minaret to climb it! The 12th-century stairway was super steep and the stairs were tiny. At the top, you get epic views of the area! It’s the tallest structure in the vicinity, so you can see all of the surrounding farmland. 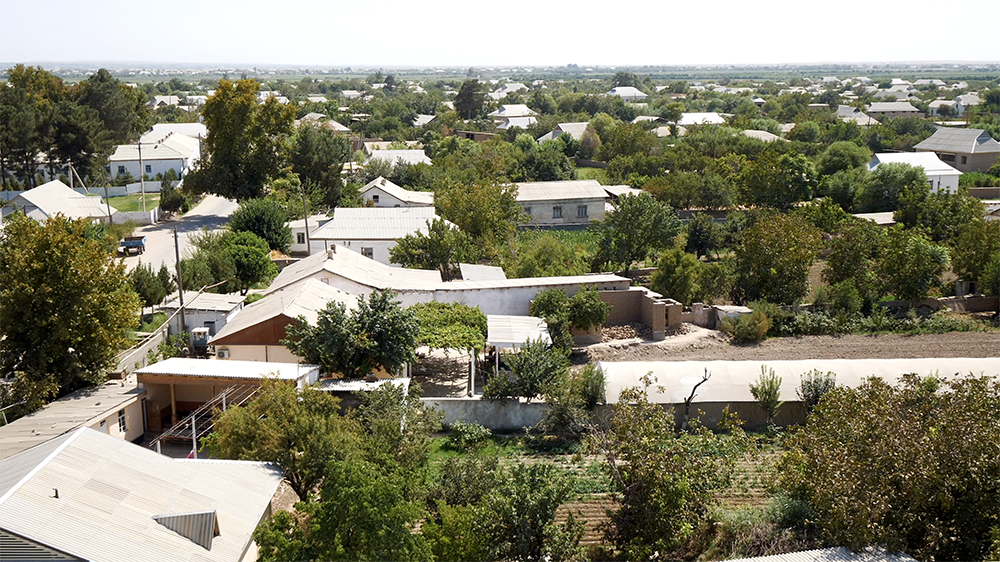 I hope you enjoyed coming on my crispy tandoori lamb adventure in Jarkurgan, Uzbekistan! If you did, please give this video a thumbs up and leave a comment. Also, please subscribe to my YouTube channel so you don’t miss any of my upcoming travel/food adventures!