On the morning of my seventh day in Kerala, India, I headed up to the world’s highest-elevated tea plantation, Kolukkumalai after leaving Munnar. Come along with me as my boy Ebbin and I catch a beautiful, early-morning sunrise there and enjoy some south India tea and fermented rice at the highest organic tea plantation in the world!

My seventh day in Kerala began at the Dream Catcher Resort in Munnar at three in the morning. Today, I’d be heading up to Kolukkumalai, the highest organic tea plantation in the world at 7,900 feet above sea level! We drove one hour to the Surianalle Estate, and from there, we’d take a Jeep up a rough road up to the top of the mountain. It was 5:02 a.m., and we had an hour to make it in time to see the sunrise! 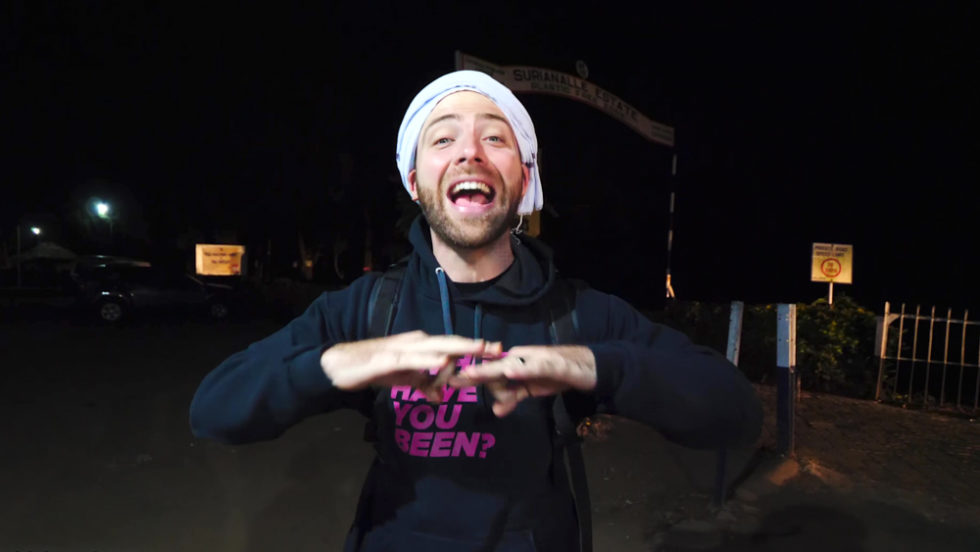 We had a 12-kilometer drive on rough roads, the first road wasn’t bad, but then the next one was super bumpy. It reminded me of the roads in Africa. The road was the rockiest I’ve ever been on in my life! It was brutal and you get thrown around, so you have to hang on. By the end, my butt was broken and Ebbin’s back was hurting. I don’t recommend this if you get motion sickness! 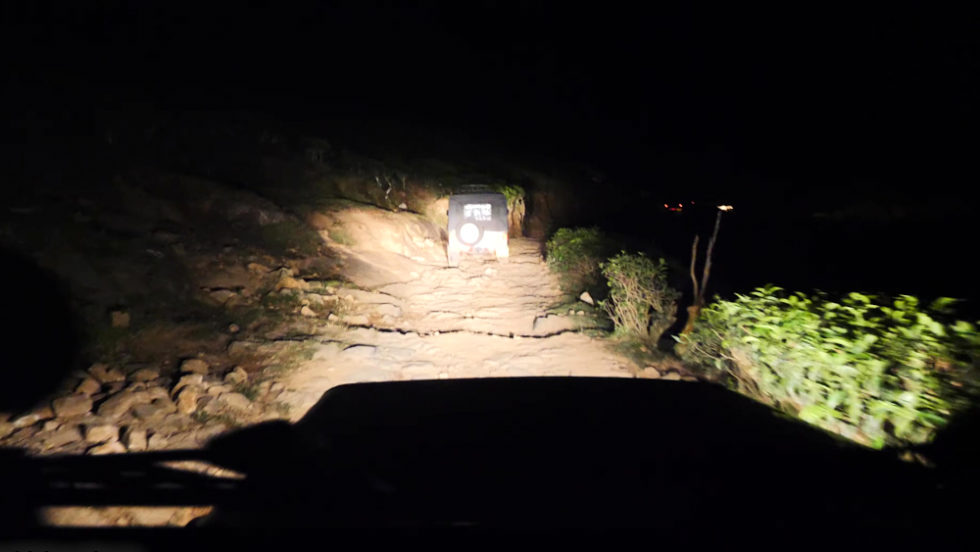 After 45 minutes, we arrived at Kolukkumalai! From there, we had a 10-minute walk to the viewpoint. The tea plantation’s factory and museum are technically located in Tamil Nadu, though the plantation straddles the border between Kerala and Tamil Nadu.

The sunrise over Kolukkumalai was incredible. We were so high up that the clouds were far below us! We could see all the colors—reds, oranges, blue, and more. They were unreal! It was the coolest sunrise I’d ever seen. We headed a bit further to see the rock formation known as the Leopard’s Mouth. 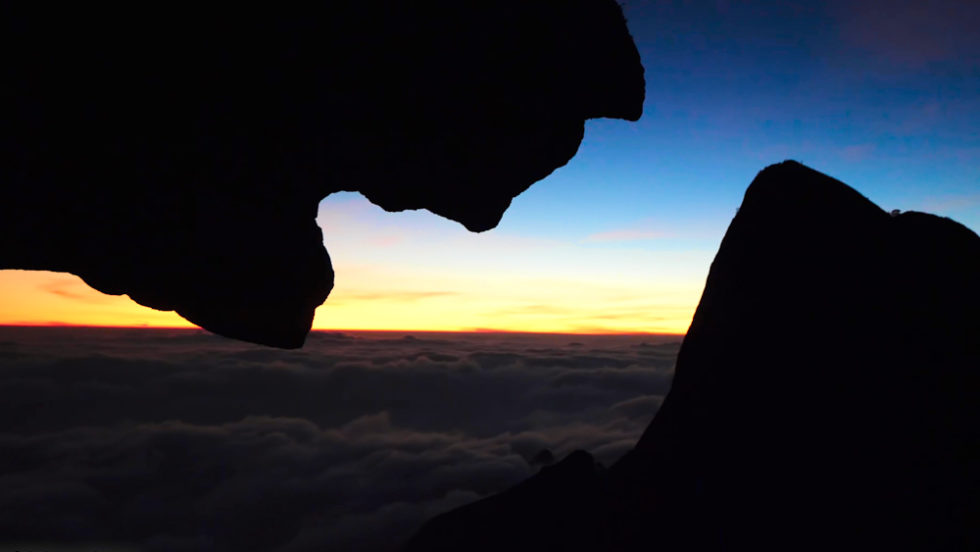 Our friends at the Dream Catcher Resort hooked us up with this spot. I had never seen a sunrise at this altitude before. With the leopard-shaped rock formation and the colors creeping up from the horizon, I could tell this would be a very special sunrise to witness. 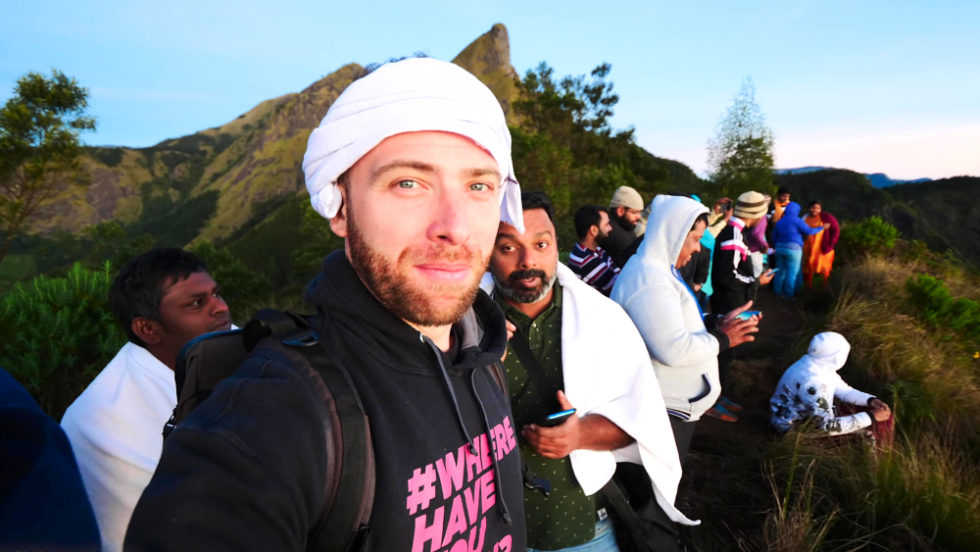 We realized that the sun would rise on the other side of the mountain due to seasonal changes, so we quickly ran over there to see it. It was 6:30 in the morning and the clouds below were starting to shift. We weren’t the only ones up there—there were lots of other people there. Then, at 6:40, the sun rose. It was incredible. The golden light was stunning. The clouds were disappearing. 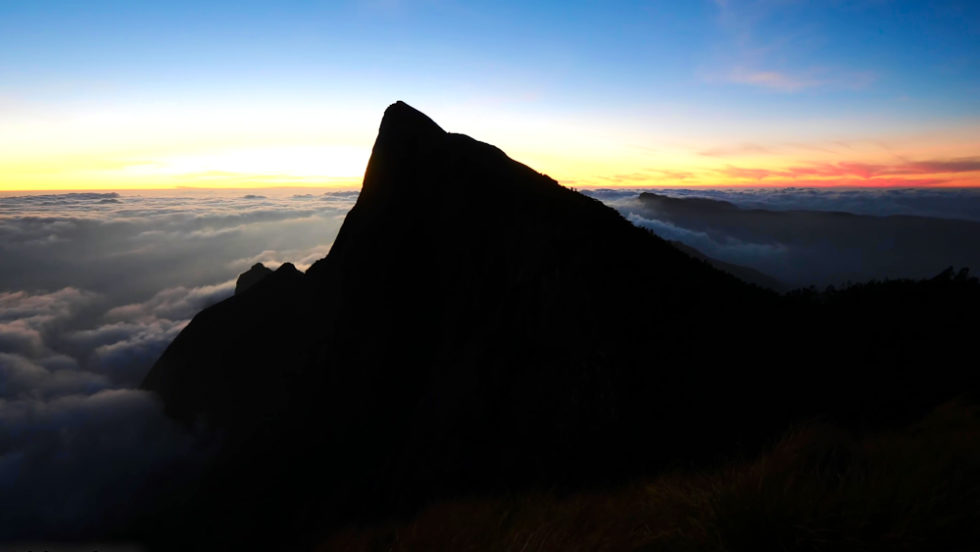 Even though it was dry season, it was still quite green up there. There was a huge drop! I could also see the tea plantation far below us. It was massive and super green. I could see lots of rolling hills and lanes and roads for pedestrians and traffic and where I guessed the factory was. I could see both Kerala and Tamil Nadu! 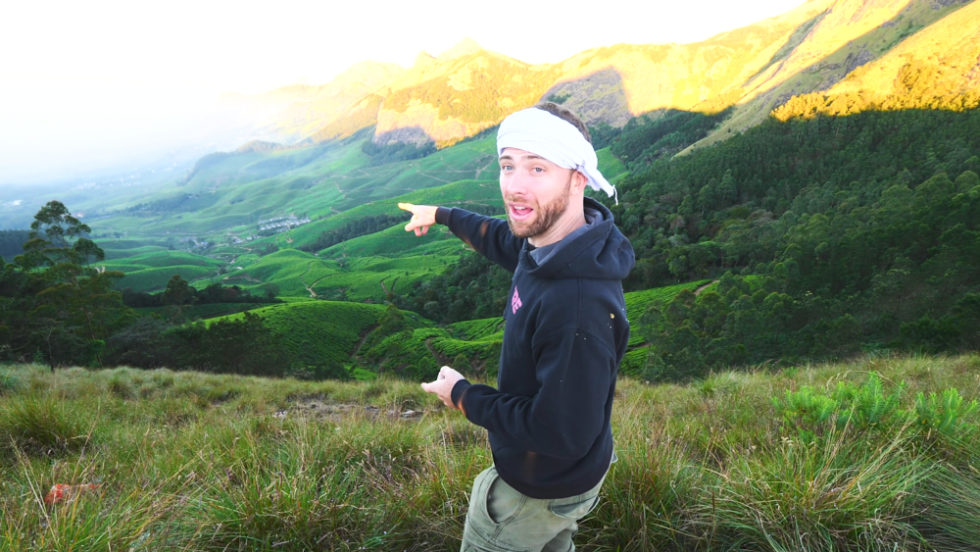 Then, we headed back down the mountain with our minds set on breakfast: tea and fermented rice in Kolukkumalai. We still had a 45-minute drive to get down there. They make the best tea in South India, and it costs 100 rupees/$1.32 USD per head to enter the factory.

We were riding on a rough road on the side of the mountain. But it was worth it. The tea plantation was so beautiful! Then, we arrived at the tea estate. Although it costs to enter the factory, the tea is free. You can also buy some tea. They served us some black tea and lemon tea. Ebbin gave me some black tea so I could get the real taste. It was phenomenal! It was filled with sugar and was the best tea I’d ever had! They also gave us some cone-shapped appams wrapped in leaves. 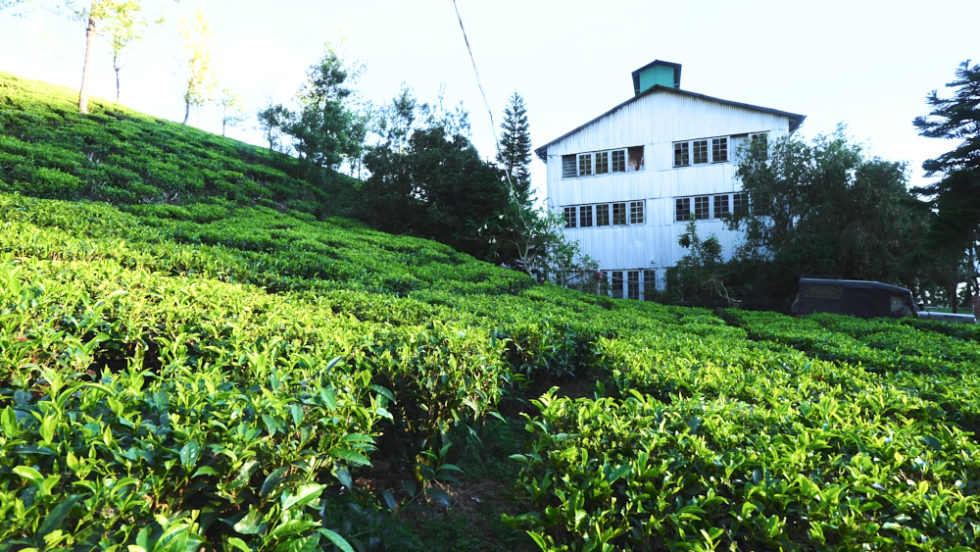 I prefer black tea, which is made from the same plant as green tea, but black tea is processed. It tastes stronger than green tea. Then, I tried the appam, which is basically rice with jaggery and spices. It was like a sweet, steamed cookie. It was dense like cassava and is often eaten for breakfast and as a snack. After having the south India tea, I couldn’t wait to have our fermented rice breakfast, but first, we needed to tour the factory! 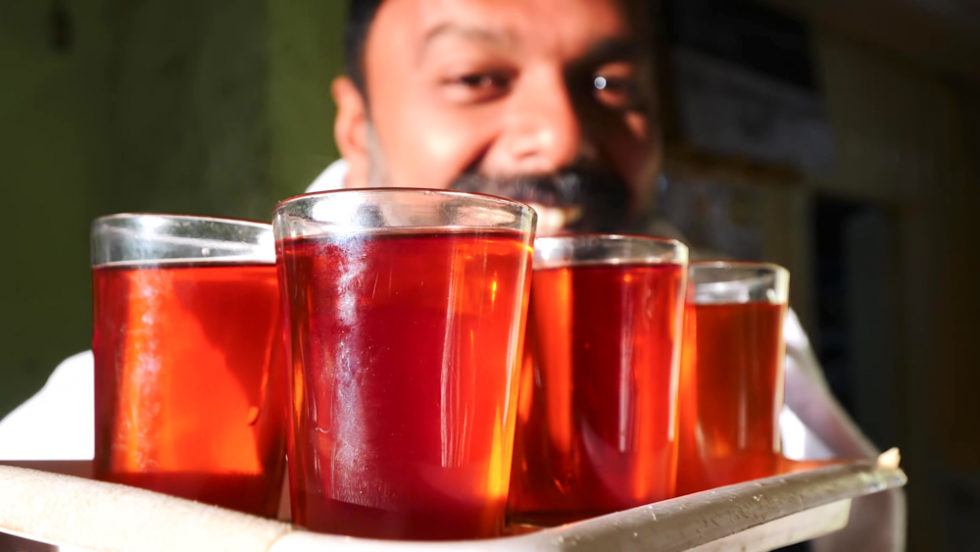 Then, we headed toward the factory, which is 100 years old. We had an amazing view of the mountains and clouds. We were so high up! It was so gorgeous. We walked through the tea garden. The best tea leaves are the ones in the middle of the stalk. I tried one. It was really nice and was different from the processed tea! All of the tea here is organic. There were gaps in the plants because they’re organic. Non-organic plants would be more filled in, but wouldn’t have the same health benefits.

Then, we went inside the 100-year-old factory. It looked super old, and the plantation is 150 years old! On the second level was the store room and two huge dryers where they dry the tea leaves. After it dries, it gets processed to make tea leaves. It was a holy day in Tamil Nadu called Pongal. 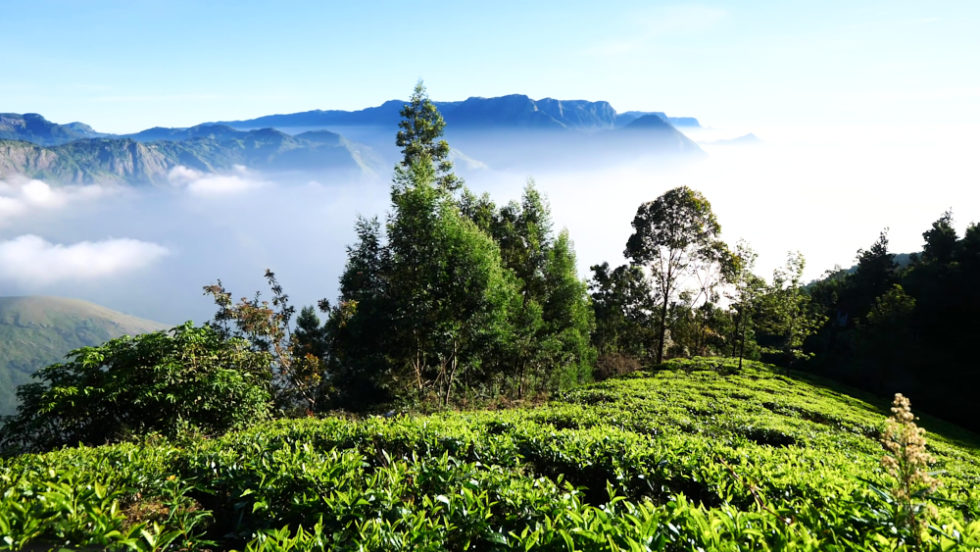 Further on, on the first level, I saw the machines that grind the tea leaves and sorts them. I got to see and feel the end result, the ground-up black tea leaves. After the rolling room, the leaves go to the fermenting room, followed by the firing room. There, they have a fire chamber and lots of wood to make a huge fire. The fire helps to drive the leaves. In the next room, the tea comes to a machine that turns the dried leaves into powder. 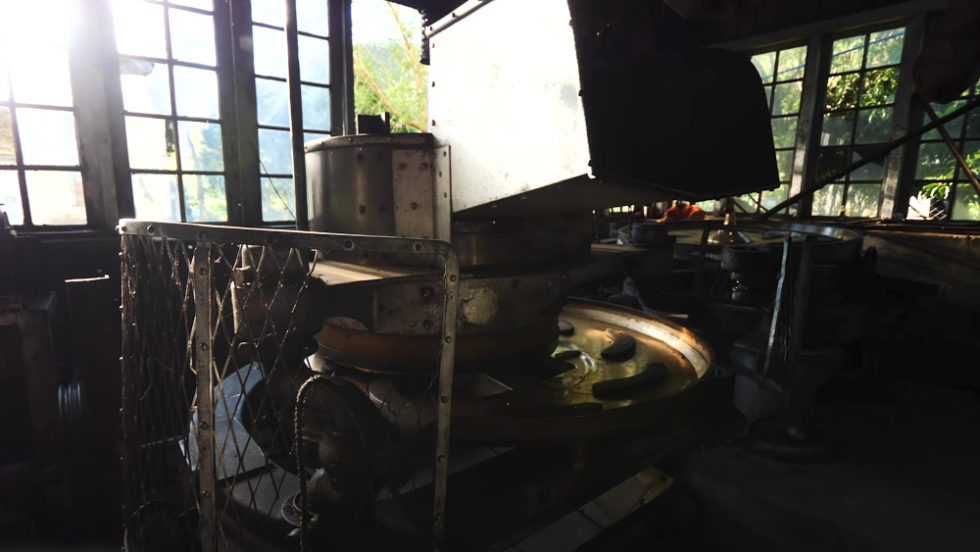 Back outside, we saw the punching machine, which is a bell you ring to make the employees come to duty. I rang it a couple of times and then, it was time for breakfast! I bought some Kolukkumalai south India tea that’s meant to be drunk without milk before our fermented rice breakfast. It cost 130 rupees/$1.72 USD. Then, we hopped back in the Jeep to go eat on a stream right outside the estate. 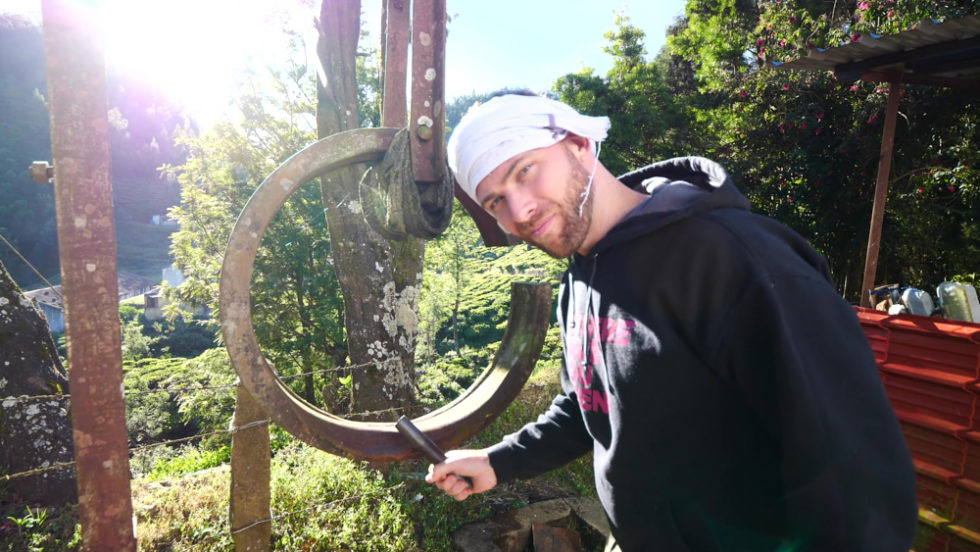 In addition to the rice, we’d also have fried and dried chilies, dried fish, and yogurt. The dried and fried chili was really earthy and wasn’t spicy at all. It fell apart in my mouth! Then, I tried the fish, which contained the same spices as the chili. It was really light, dense, and felt like a sardine. It was really salty, dry, and peppery, though, but I liked it a lot! The fish was chewy but chewable.

Check out the Top 10 Things to See and Do in Bengaluru, India

Then, we were served some soupy fermented rice with wild gooseberry pickles, chilies, dried fish, and yogurt. I started by drinking the soup, which was really light. Then, I tried the rice with the yogurt and pickle, which was really nice. I took a bite of another chili, followed by some of the rice. The fermented rice was very different, flavor-wise, and starchy. The chili was a nice palate cleanser. With the fish, it’s like you’re getting spice and salt with the rice with the yogurt and pickle. It’s a nice contrast! 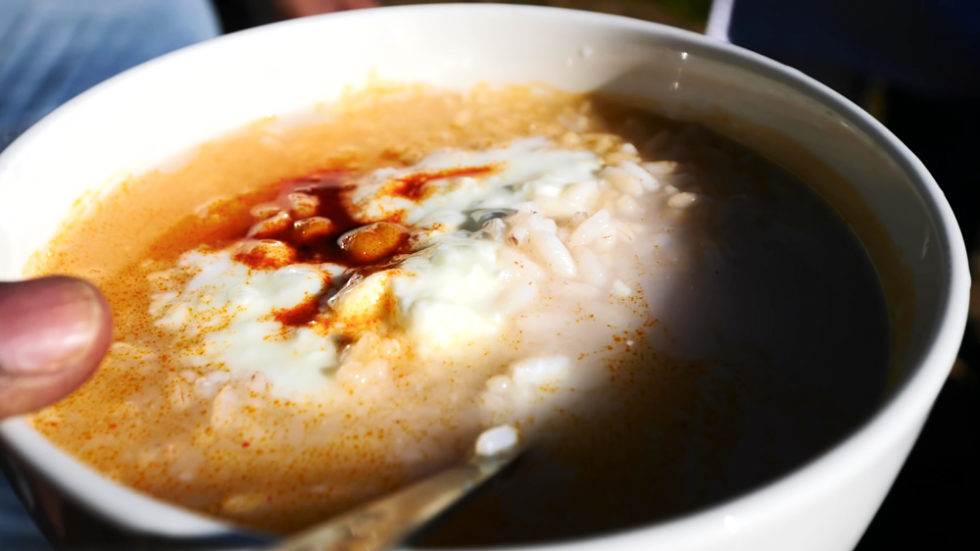 The rice is really sour! I could tell it would get even more sour like toddy if it fermented for another day. 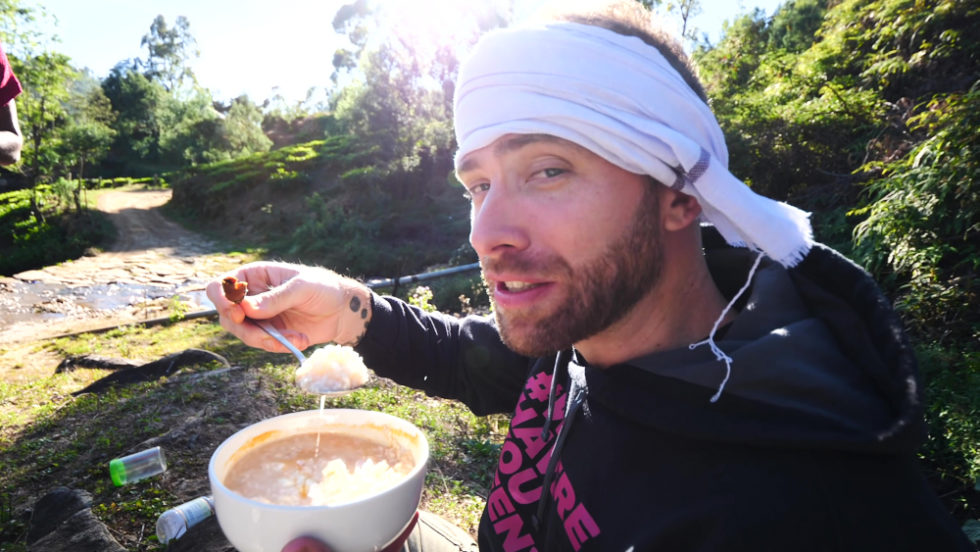 What an amazing meal in the middle of nowhere in Tamil Nadu! Having the south Indian tea and fermented rice at Kolukkumalai tea plantation was amazing. I have to thank my boy Ebbin for taking me out there. Be sure to check out his travel and food adventures on his Instagram and YouTube channel! 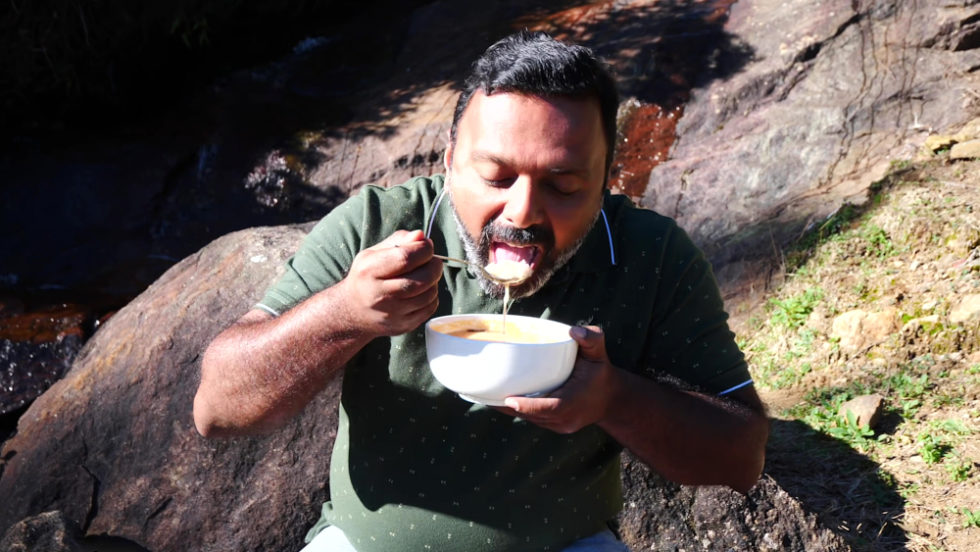 I hope you loved coming with me to have south India tea and fermented rice in the world’s highest organic tea plantation! If you did, please give this video a thumbs up and leave a comment below. Also, please subscribe to my YouTube channel and click the notification bell so you don’t miss any of my travel/food adventures around the world!