After a couple of days exploring the beautiful hill station of Munnar in Kerala, India, my boy Ebbin and I continued our adventures with a road trip to Kochi! Along the way, we made a few stops and had some spicy Indian food at a toddy shop between Munnar and Kochi! Come along with us as my epic seventh day in Kerala continues!

My afternoon began in beautiful Munnar, the tea capital of southern India. My buddy Ebbin and I had a jam-packed afternoon planned, as we were setting off back toward the coast to the commercial capital of Kerala, Kochi! It would take about four hours to get there, and along the way, we’d stop at a toddy shop for lunch. I couldn’t wait to have more spicy Indian food, visit a toddy shop, and try more delicious coconut wine! 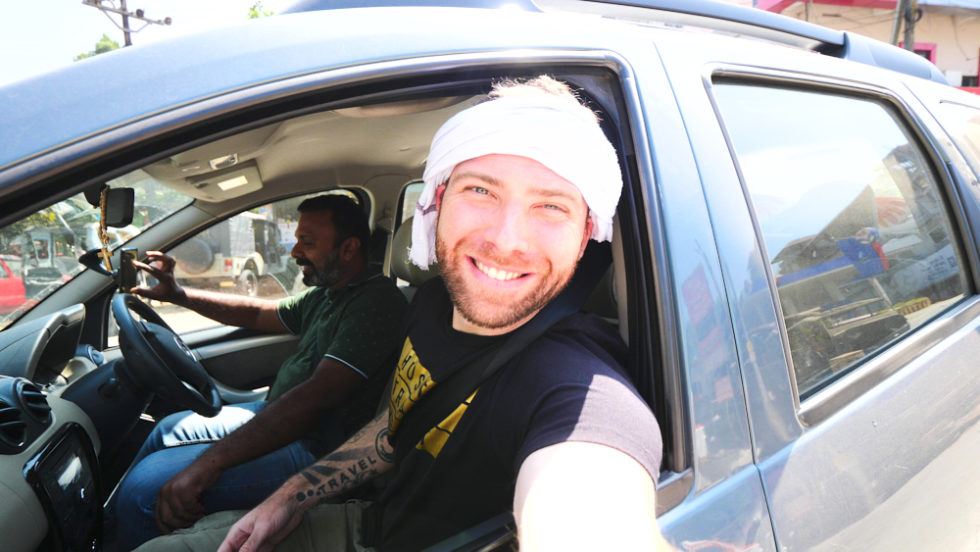 Munnar is really amazing. I don’t know what I expected before I got there, but it exceeded all of my expectations. It’s absolutely gorgeous and is a must-visit when exploring southern India. There are a lot of winding roads, but it’s such an epic location. 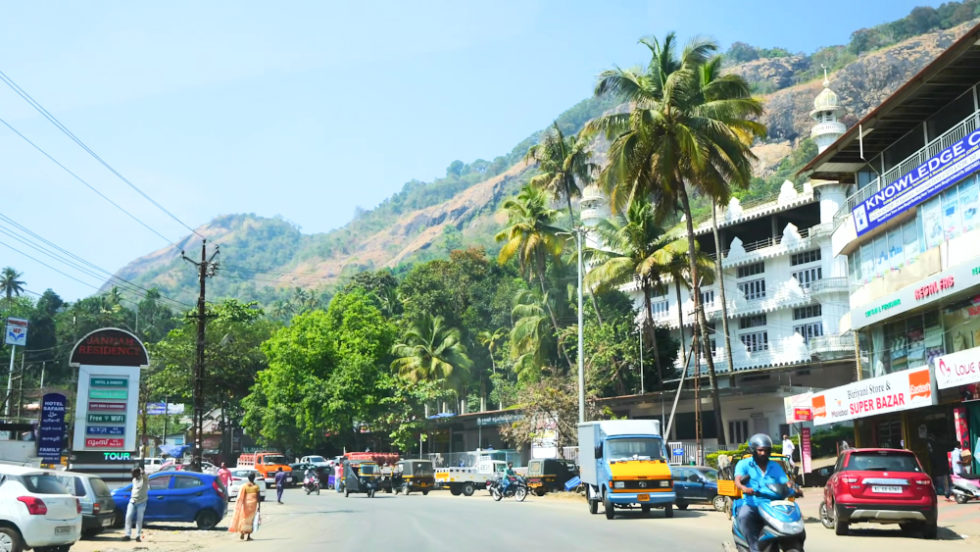 We passed through the town of Adimali along the way. As you continue west, the mountains of the Western Ghats melt away and the terrain gets much flatter. The temperature also changes drastically. Being at a high elevation up in the mountains, Munnar is really cool, but as you continue downhill toward the coast, it becomes quite hot. I was visiting in January during the dry season, which is probably the best time to visit.

We stopped at a roadside shop, where a vendor sold some buttermilk made from yogurt that contains ginger and chilies. It was very different and really strong. It was very milky. I hadn’t had any this strong and it only cost 10 rupees/$0.13 USD! It was a good deal! 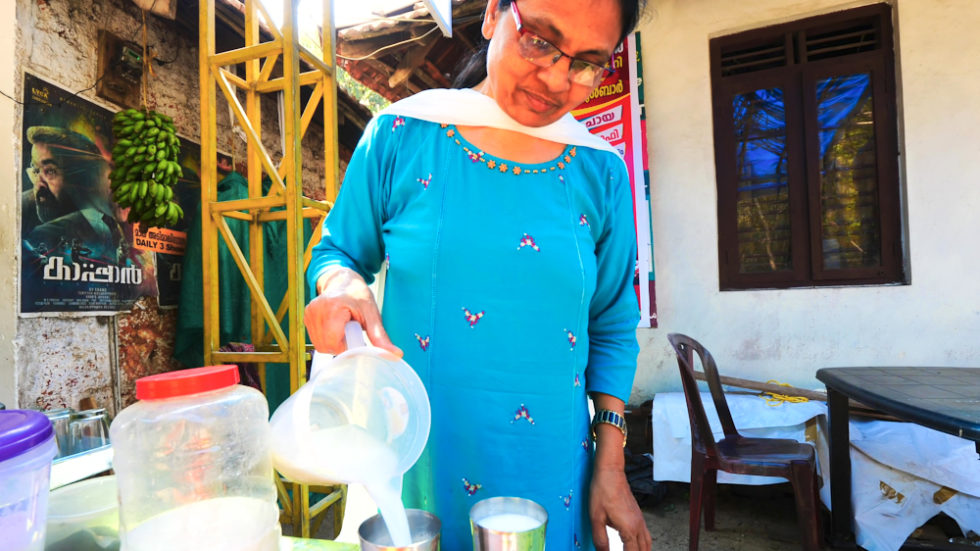 We had about an hour to go until we reached Kochi and I was hungry, so I also grabbed a plantain. There are over 25 species of bananas here and they’re really filling. It wasn’t super ripe, but it was really good. We continued on and stopped for a few minutes to view Valara Waterfalls, a beautiful, 100-foot waterfall that you can view from the road. It’s a must if you’re traveling between Munnar and Kochi! 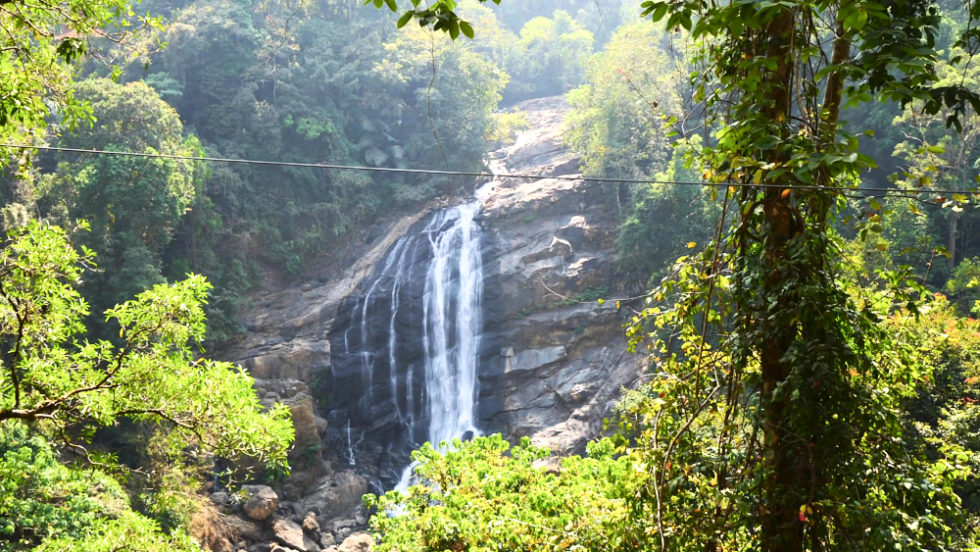 After 2.5 hours of driving, we arrived at Manthoppu Toddy Shop in Kothamangalam. Ebbin promised I’d have food I’d never had before here, including a dish called pidi. The restaurant was really charming, with a shelf full of at least 20 varieties of jarred pickles. High up on the walls was a large ornament of a guy riding a bicycle to go get the toddy. There was even some artwork that shows how they extract the nectar from the coconut trees to make toddy! 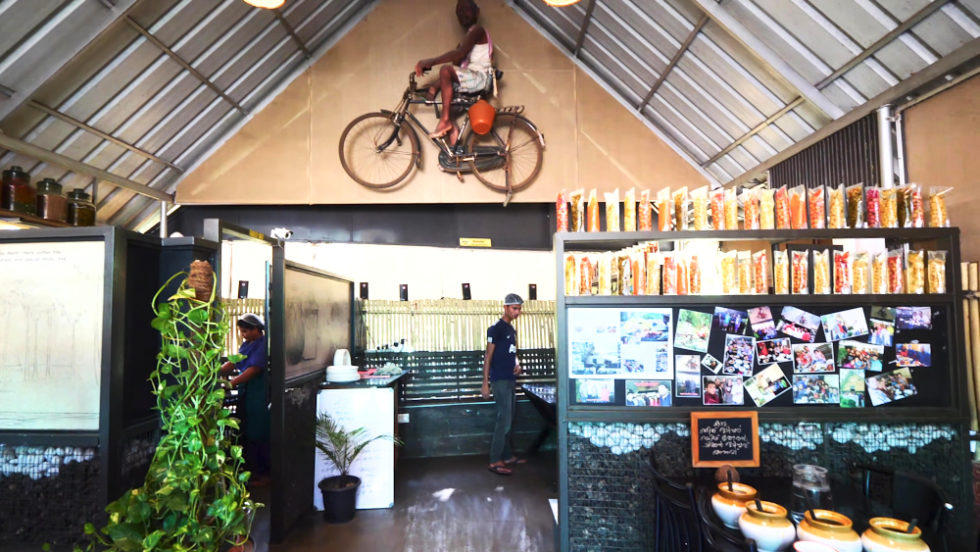 Toddy is usually best when it’s fresh, as it gets sourer and more fermented the longer it sits out. The kind we’d have probably wouldn’t be as fresh since it was the afternoon. I visited the kitchen to watch the cooks prepare our meal, which looked incredible. Then, it was time to eat!

Pidi is cold rice balls. I put a few on my plate and started with the pulled chicken, which contained chilies and curry leaves and was bright orange! Then, I added grated, dried beef, which looked super crunchy, flaky, and broken down. The crushed beef fry also looked similar, almost like jerk beef or jerk chicken. Then, I added the rich chicken curry, which was full of masala and curry leaves. 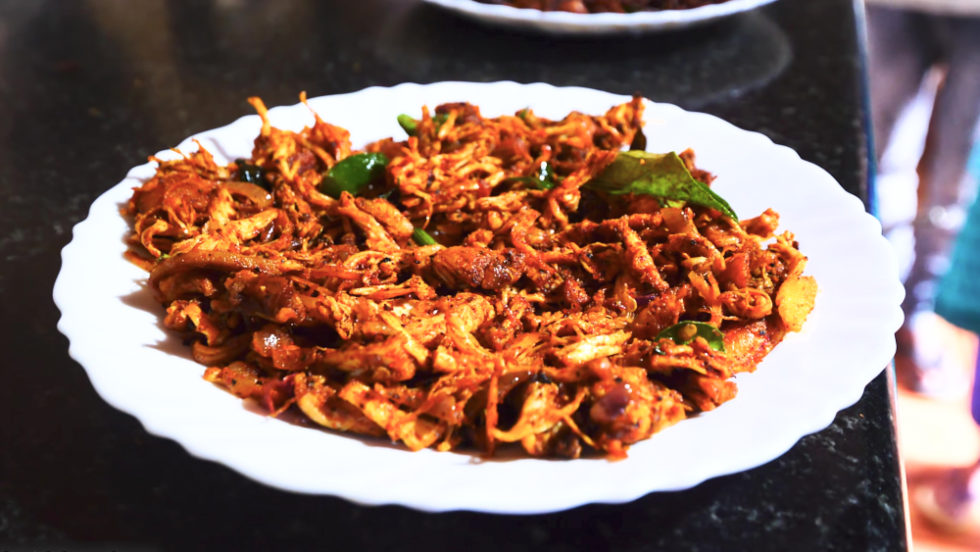 I started with the pidi by itself. It was like rice porridge made of dense balls and was pretty good. Then, I mixed in the crushed beef fry. It was nice, chewy, and spicy. It was very different from the pidi but it went well together! 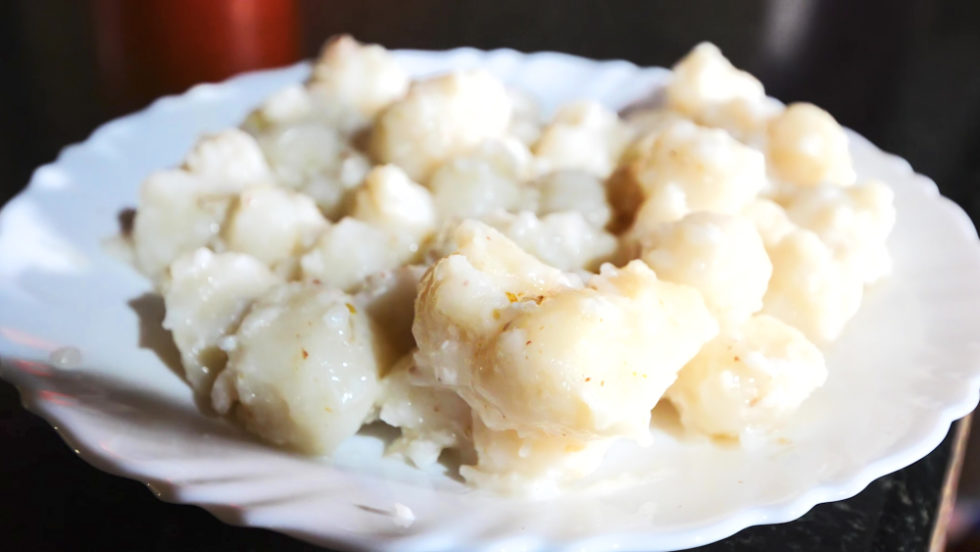 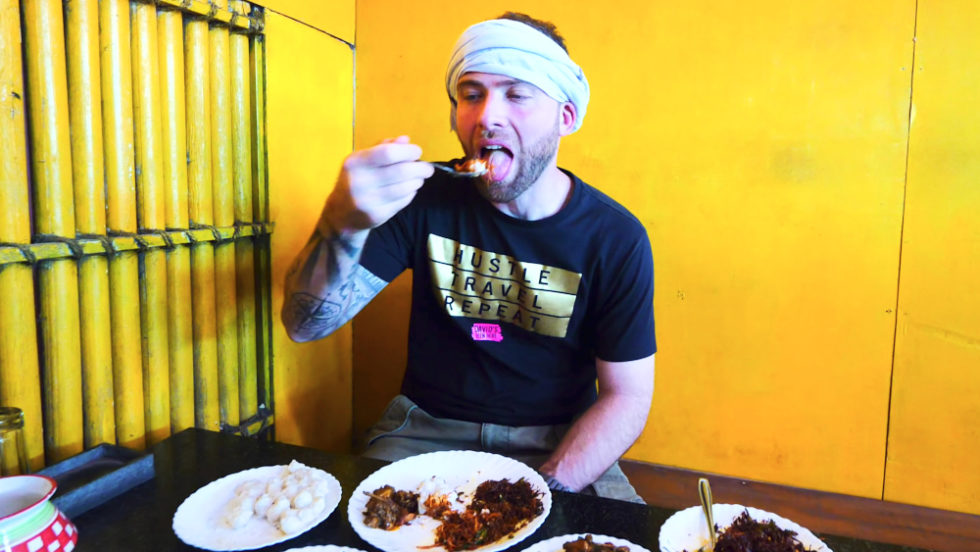 The chicken curry was pretty good and quite spicy! The flavors were starting to mix together in my mouth, so I started digging into everything. I loved the crunchy beef and the hot chilies! Then, Ebbin tried everything. He said the pidi was like rice balls boiled and cooked in a rice porridge. He thought the chicken curry and pulled chicken were great, but that the beef could be better.

It was a great meal! I hadn’t had anything like it. I added some crushed, grated beef on top of the pidi and mixed it together. The beef stuck to the sticky pidi well! It was so good! The pidi was bland, but the beef added a ton of flavor and a nice crunch. I couldn’t help but finish the plate! 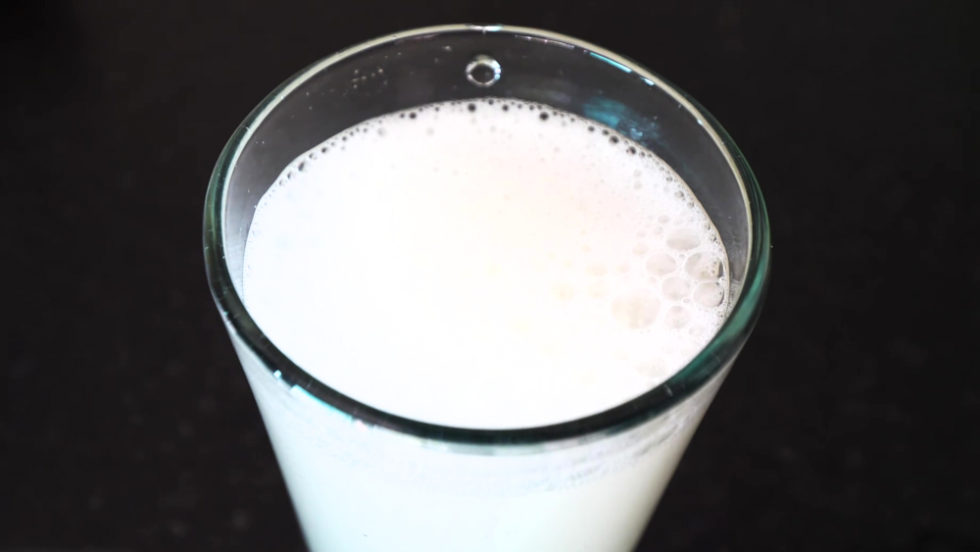 To try the toddy, we had to leave the restaurant and head across the street to a chill spot with five tables. The toddy had just been tapped, and I downed my glass all in one go! It was nice, sweet, cold, and fresh! I loved the milky texture and the cloudiness of it. You can feel the alcohol in it, but it’s not so bad. 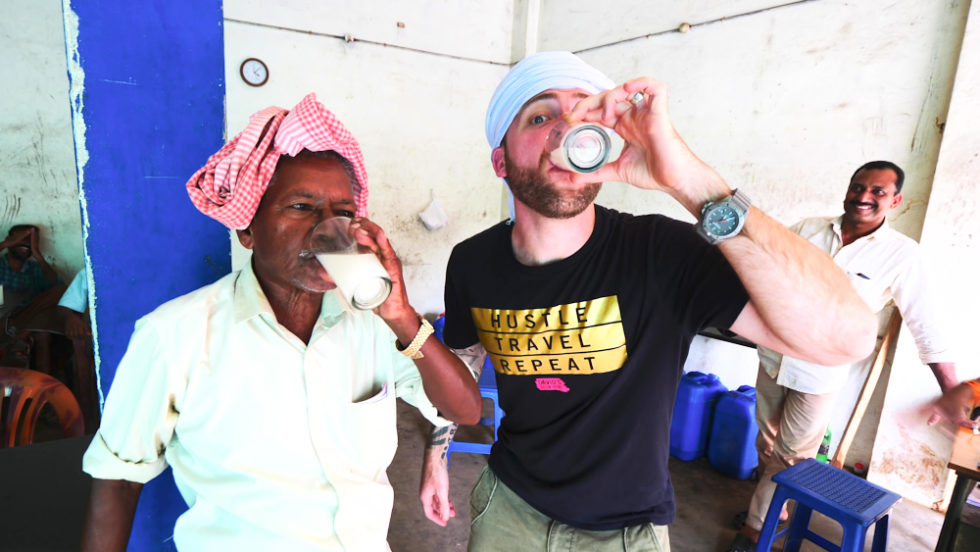 One of the men in the shop challenged me to a chugging competition. I downed my glass before him! It was really fun to drink that much and not have it hit me at all. You have to eat spicy Indian food at Manthoppu Toddy Shop between Munnar and Kochi! It’s the place to stop along this route and is only about an hour outside of Kochi. If you’re coming from Munnar, it’s about 2.5 hours west from there. 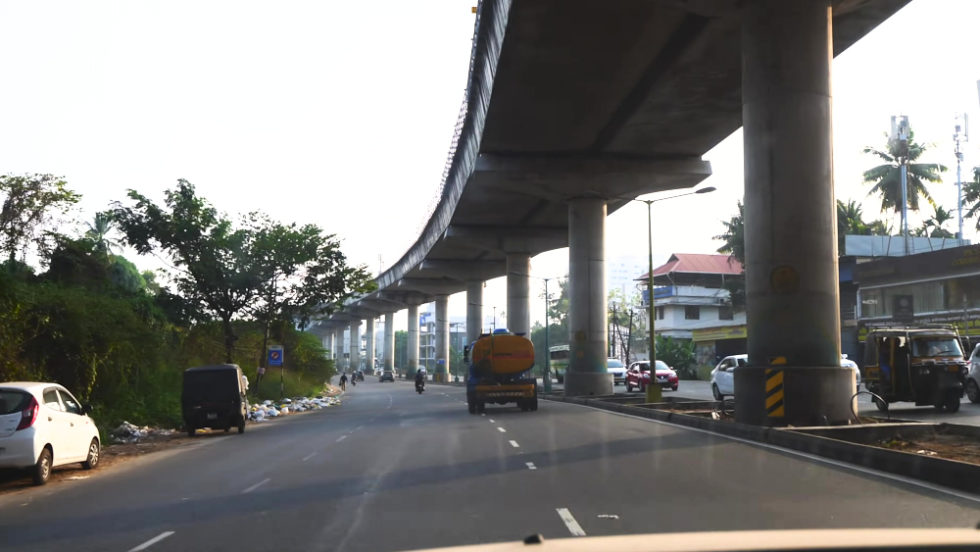 Then, we continued on to Kochi and entered the city. The city has two major railway stations: North and South. The elevated tracks reminded me of the railway system in Miami. The stations are huge, monster blocks. Kochi is one of Kerala’s biggest cities and the state’s commercial hub. There were lots of people, cars, and buildings. It takes about 40 minutes to cross the city to get to Coral Isle Hotel, near the northern railway system.

Traffic was intense, as we arrived at 5:40 p.m. during rush hour. After 35 minutes, we reached Coral Isle Hotel, where I’d stay for one night. Ebbin lives in Kochi, so he had a spot to crash at! I was hoping for a suite! Inside, I was welcomed warmly by the staff, who served us an amazing watermelon drink. It was really refreshing! 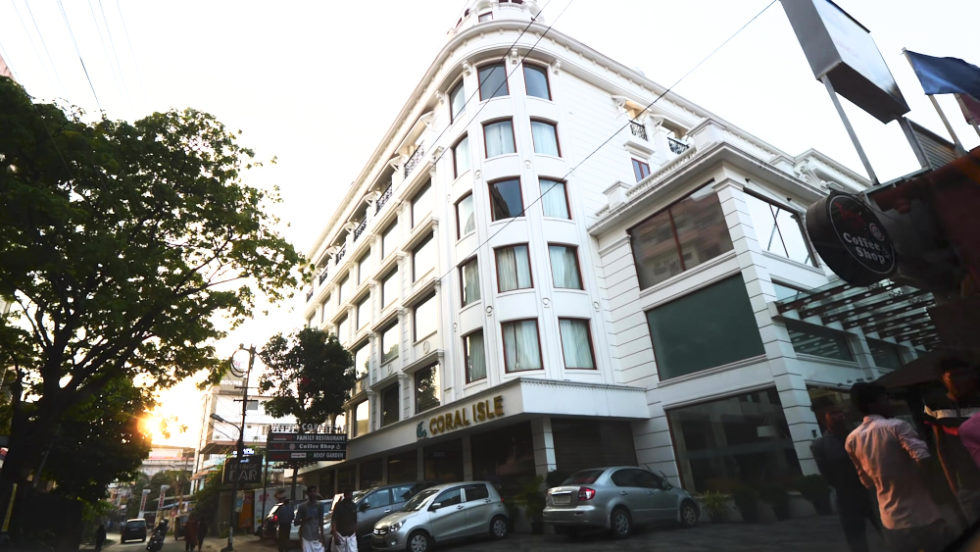 Coral Isle Hotel boasts 47 rooms. They gave me a beautiful, modern room with a king-sized bed, a TV, wood floors and furnishings, a comfortable chair where I could kick back, a nice workstation, and a super nice bathroom. There was a large window next to my bed that looked right into the bathroom, so I could see my toilet and sink from my bed! It still had a foresty, rustic look with the wood floors and furniture! 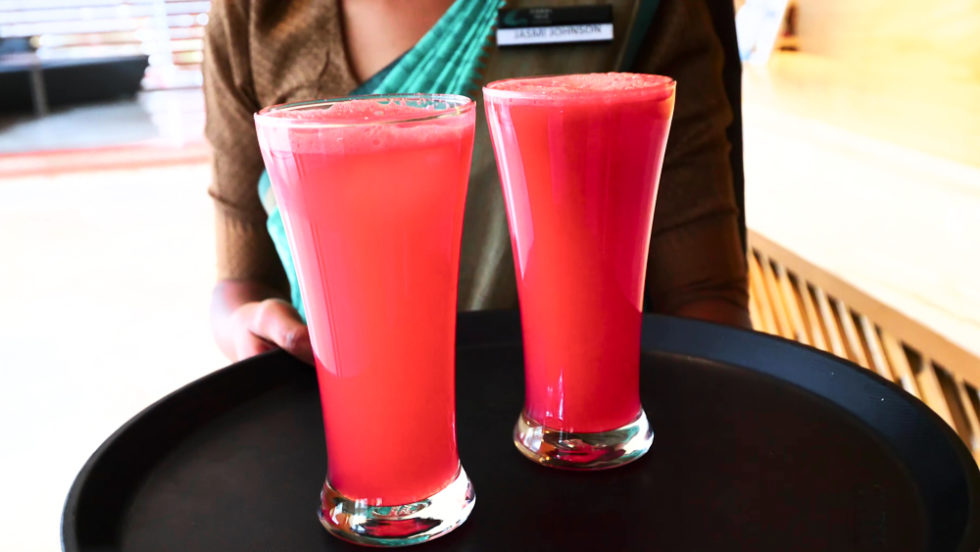 Wow, what a day! I have to thank my boy Ebbin for continuing to make my experience in Kerala one of the most special I’ve ever had while traveling. Be sure to follow him on Instagram and check out his amazing food and travel YouTube channel! 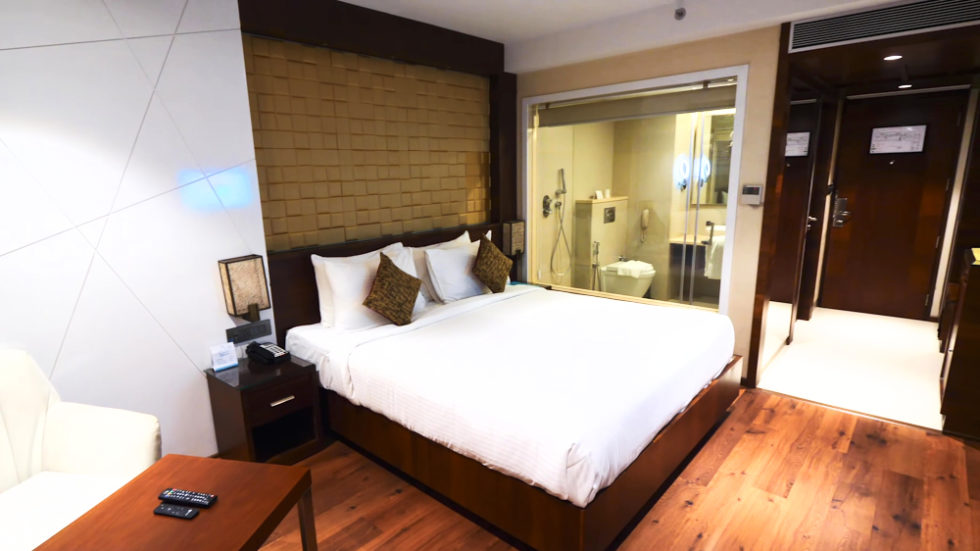 I hope you enjoyed coming with me to have spicy Indian food at Manthoppu Toddy Shop as I traveled from Munnar to Kochi! If you did, please give this video a thumbs up and leave a comment below. Also, please subscribe to my YouTube channel and click the notification bell so you don’t miss any of my travel/food adventures around the world!