My epic adventures in the Kakheti region of Georgia continued in Signagi, where I enjoy some outstanding Georgian food and stay the night. Come with me as I try Georgian village food in Qedeli, Georgia!

After a long day of exploring southeastern Georgia with my friends Tim and Alex from Friendly GE, it was great to pull into the town of Signagi, the capital of the wine region! Along the way, we’d get to see how local bread is made! 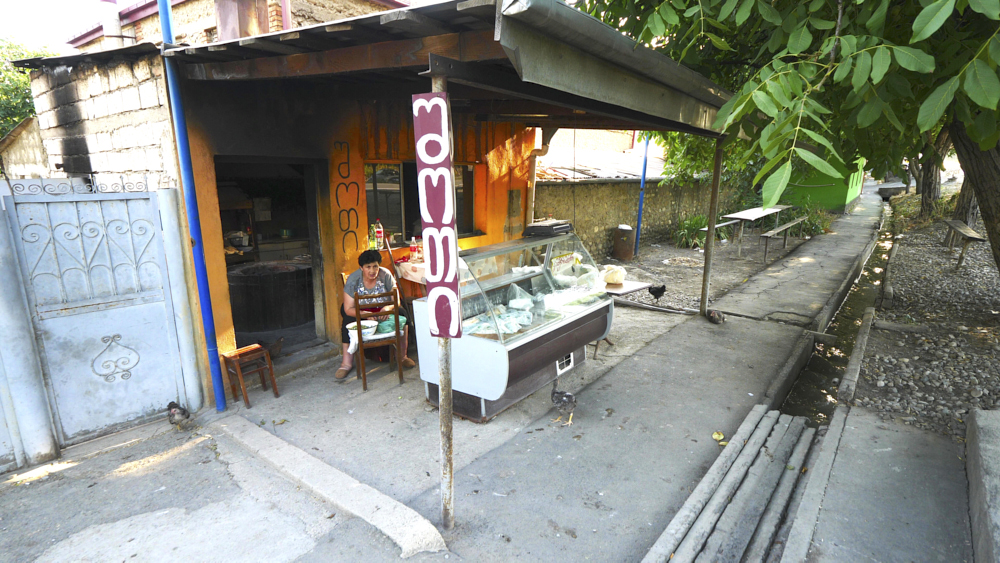 I got to try some delicious, crispy bread and crumbly, salty cheese at a small stand. It reminded me of feta or goat cheese. Inside the kitchen, I got to see the woman making long, crispy breadsticks in a tone oven, which is a clay oven similar to a tonir or a tandoor. 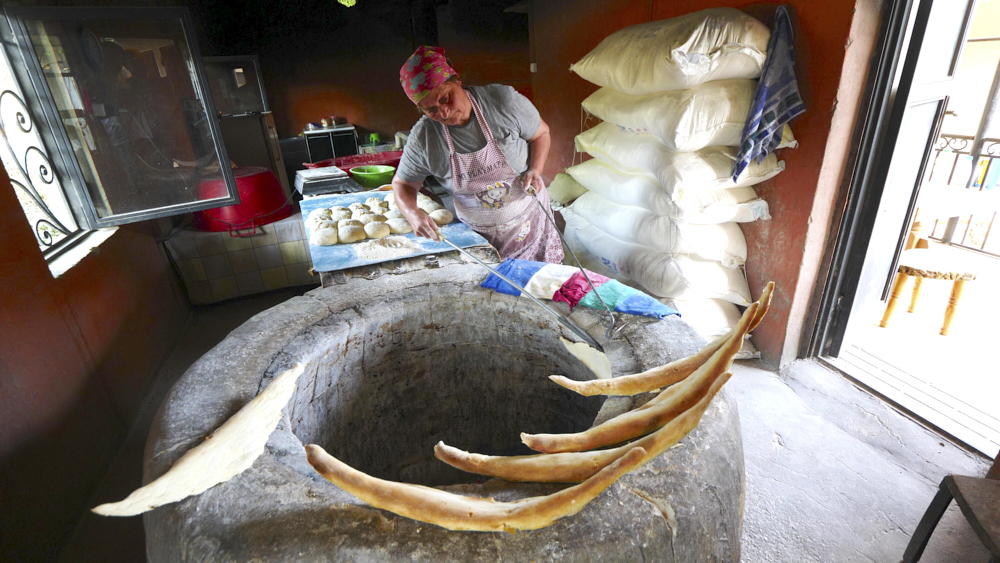 She had already made hundreds of pieces of bread, which she had all lined up. They were still smoking hot. Bread and cheese are huge parts of the cuisine in Georgia, especially in the Kakheti wine region. 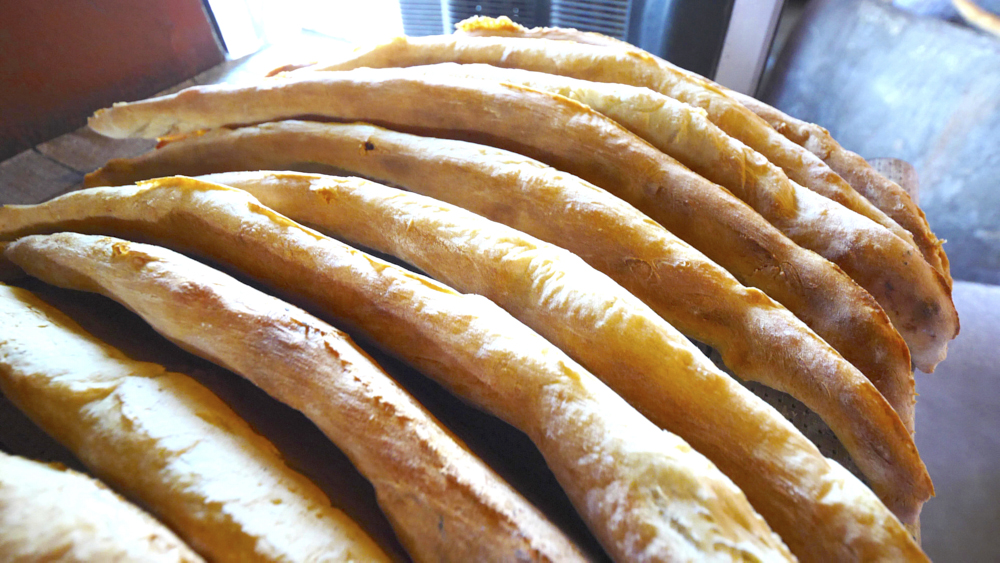 We passed through the village of Badiauri, roughly an hour east of Tbilisi, on the way to Lost Ridge Inn.

Lost Ridge Inn is a boutique hotel with six rooms, a three-barrel craft microbrewery, and an outdoor fire kitchen in Qedeli, a village just outside of Signagi. I met one of the employees there, who showed me around the property. They have a horse ranch and a small outdoor café as well! 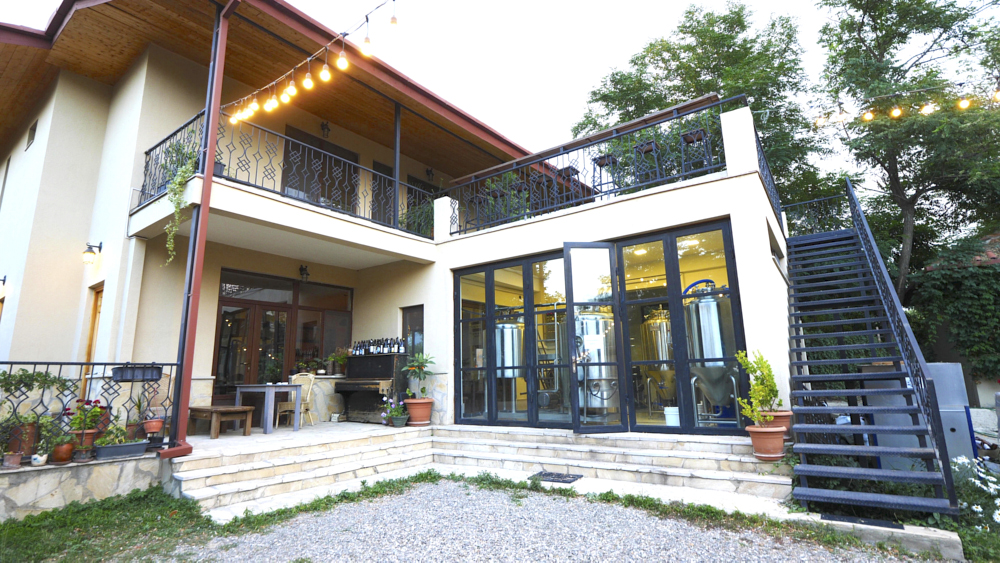 After playing with a puppy outside, they took me to my room, the Archaeology Suite at the Ranch. It’s inside a 19th-century farmhouse and feels very rustic and historic but also has a modern and clean bathroom, a balcony with a fireplace, a washing machine, a dining room, and a private kitchen. 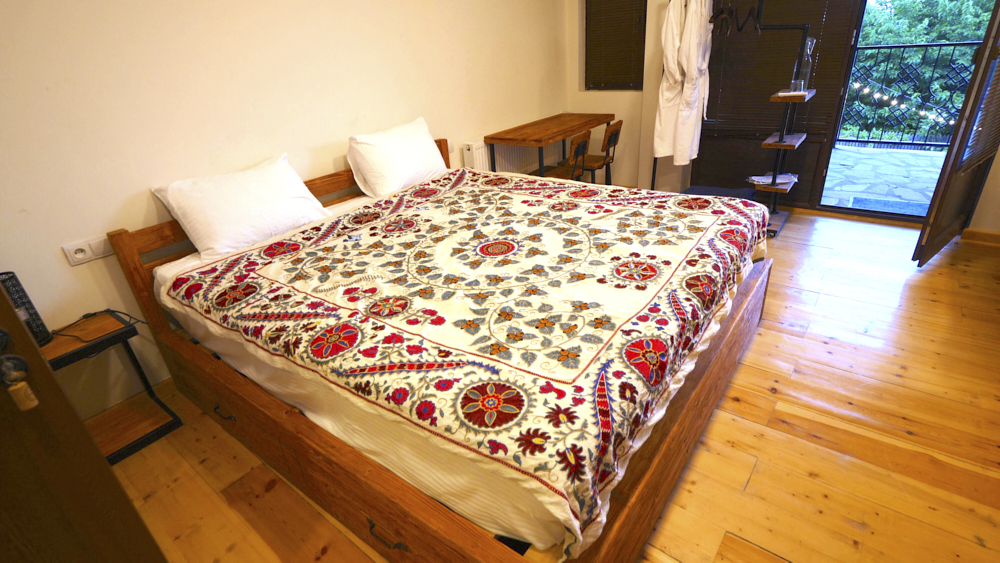 Then, I headed down to the brewery and kitchen. As you head down, you can see the valley below. I couldn’t wait to eat and have some wine! Inside the fire kitchen, we had tolmas, eggplant, a salad, a matsoni-and-tahini soup with pine nuts, a spicy cabbage, fried jonjoli, cheese and honey, and more. 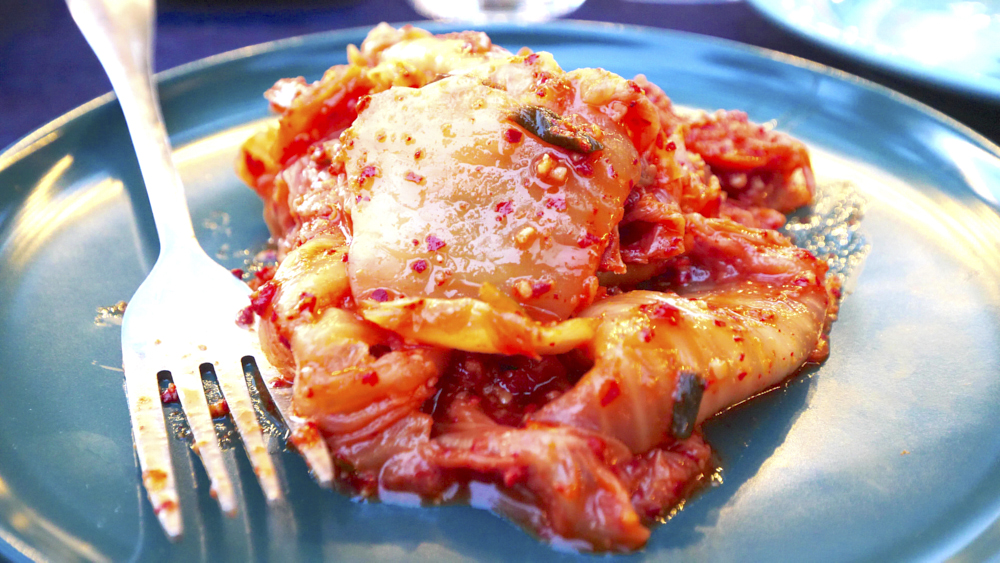 The spicy cabbage was really hot, and the fried jonjoli came with a fantastic yogurt sauce. I also loved the matsoni soup with cucumbers and pine nuts. Matsoni is a special type of Georgian yogurt that’s kind of bubbly! It was a nice, cold summer soup!

After toasting with more wine, I tried some tolmas (stuffed grape leaves) stuffed with lamb and a crisp, fresh arugula salad with yogurt. It was fantastic! We followed that with some Pheasant’s Tears wine. 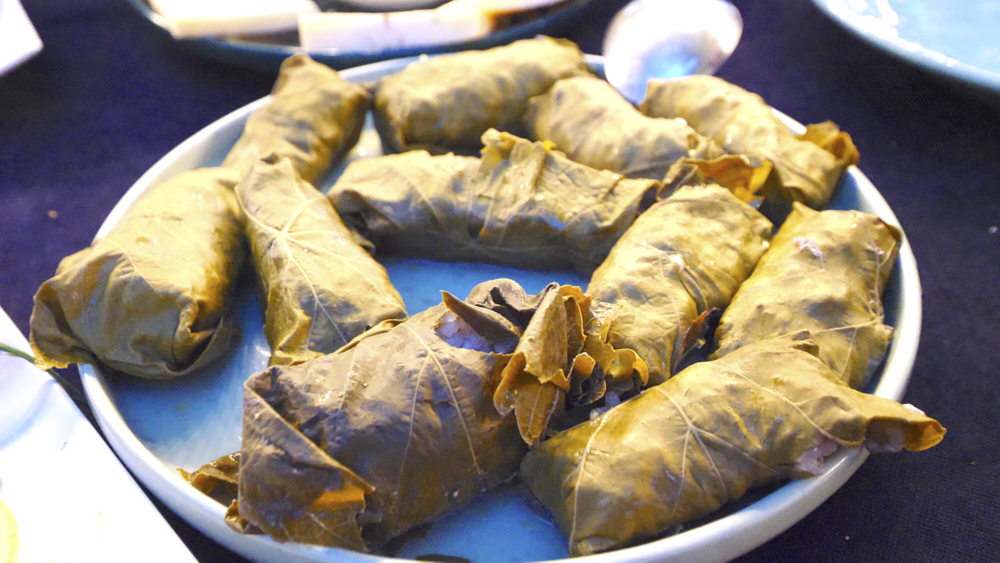 Next was the Georgian version of mac and cheese with ricotta and Ethiopian spices! It was flaky and contained phyllo dough and is from upper Adjara. The eggplant with walnut paste was unreal, and the breaded and fried cauliflower with sour cream and paprika was creamy, crunchy, and mouthwatering! 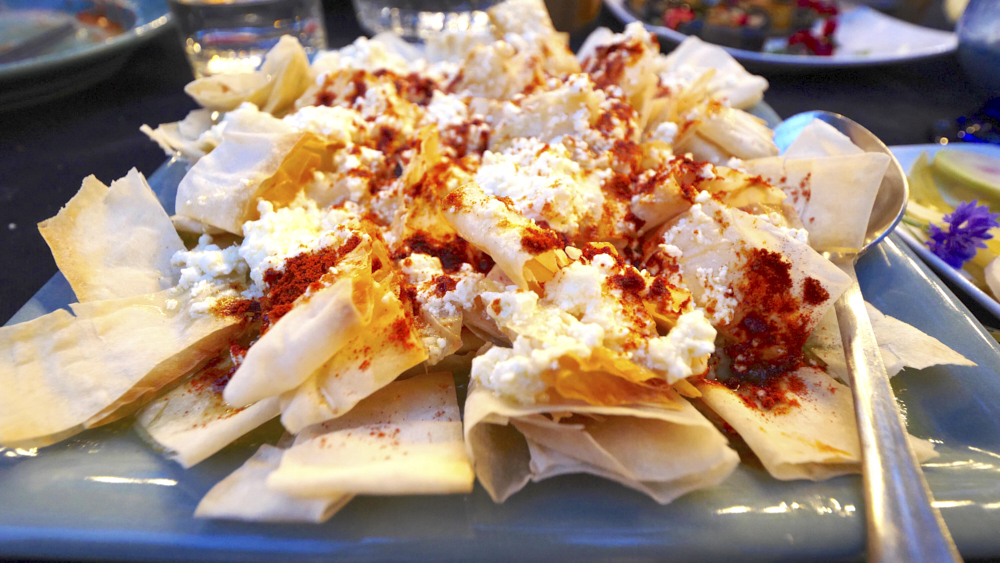 The potatoes with dill and plum sauce were unreal. Dill is a very popular ingredient in Georgian cuisine. They were some of the best fried potatoes I’ve ever had! 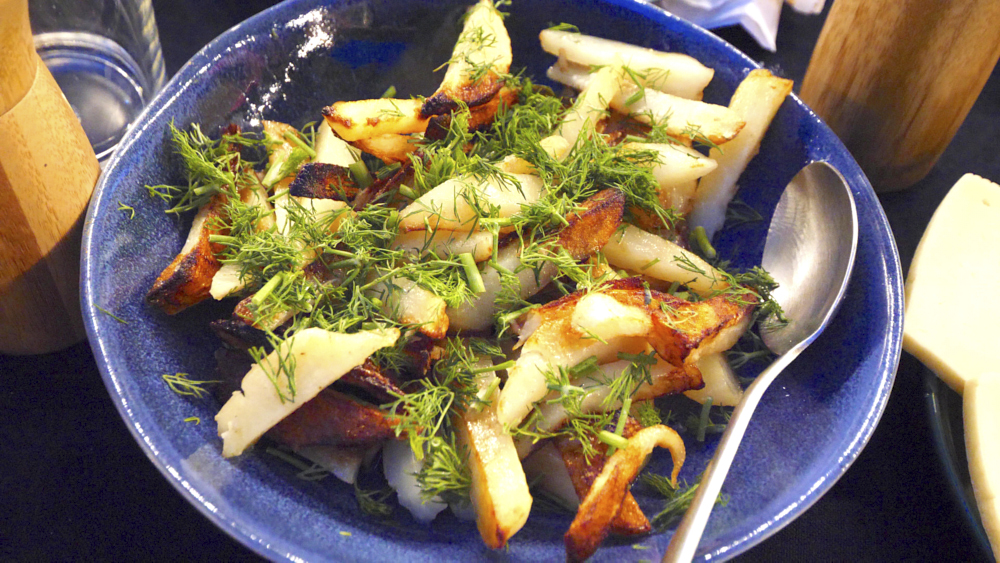 After dinner, we walked through the dark to the winery. Tim and I tried a crisp and hoppy Svia IPA from the tanks, followed by the Rhododendron Saison, which had a nice floral flavor.

Next was the Blackthorn Saison, which had a similar flavor profile to black currants. It was a nice Belgian-style beer! Then, we had a smooth and slightly bitter Hazy IPA before ending our night! 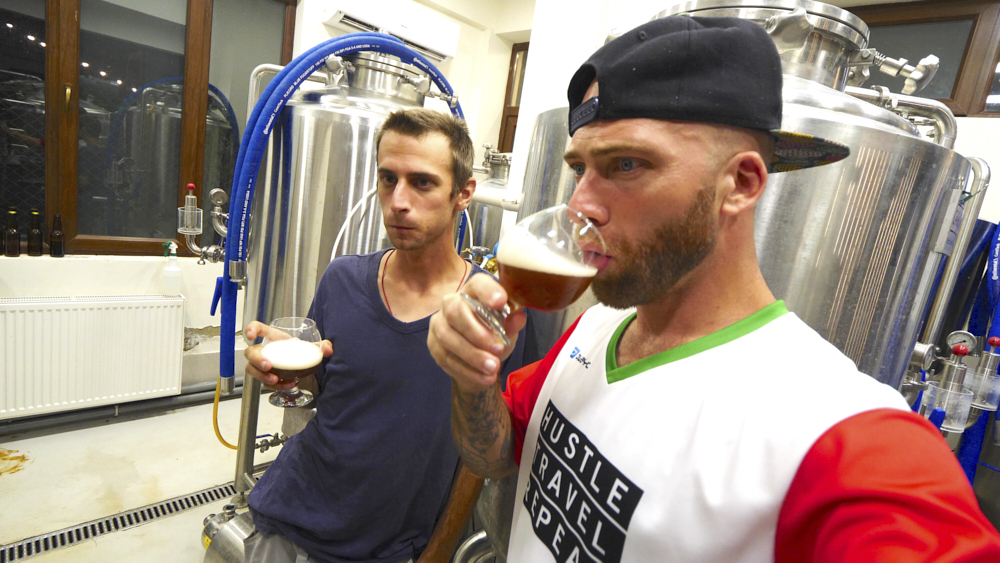 I hope you liked coming with me to try Georgian village food in Qedeli, Georgia! If you did, please give this video a thumbs up and leave me a comment below. Also, please subscribe to my YouTube channel and click the notification bell so you don’t miss any of my upcoming travel/food adventures!