Herzegovina is the southern region of Bosnia and Herzegovina. This heart-shaped country is a magical place blessed with natural beauty and several amazing destinations that can satisfy even the most discerning of travelers. If you plan on exploring Bosnia and Herzegovina, there is much to hold you in this mountainous region. 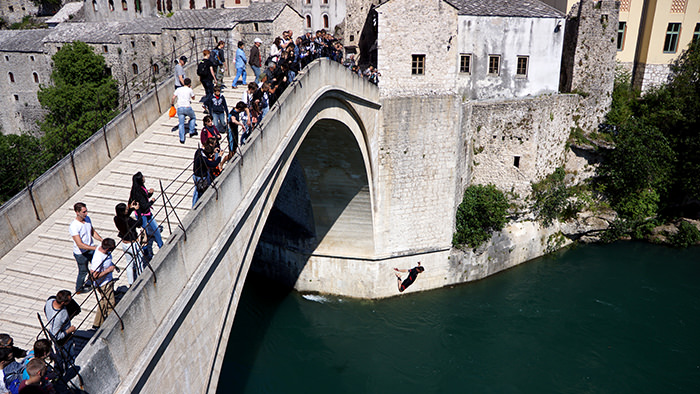 Here are our top 8 places to visit in Herzegovina: 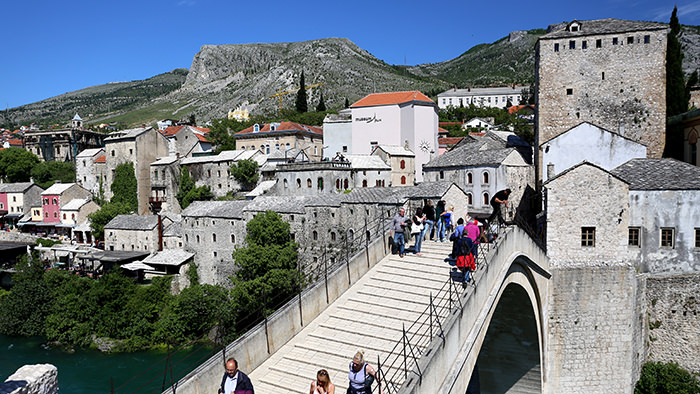 Home to the iconic Stari Most (the Old Bridge), Mostar is one of the most picturesque cities in Bosnia and Herzegovina. Old Ottoman -style houses, cobblestone streets, bazaars filled with art and souvenirs, bohemian cafés, and several hotels make Mostar a tourist-friendly city. But don’t let the crowds fool you – Mostar continues to offer authentic Bosnian culture. When the group tours leave each afternoon, the city takes on a laid-back vibe that makes it perfect for strolling, dining, and leisure shopping. The city’s undisputed top attraction is the daily display of the brave divers who jump off Stari Most into the freezing water of the Neretva River below. These thrilling spectacles, however, aren’t free. If you want to see a diver jump, you’ll have to pay up. These are professional divers that charge 25 euros per jump. The best place to watch the divers is from the cafe on the north side of the bridge. 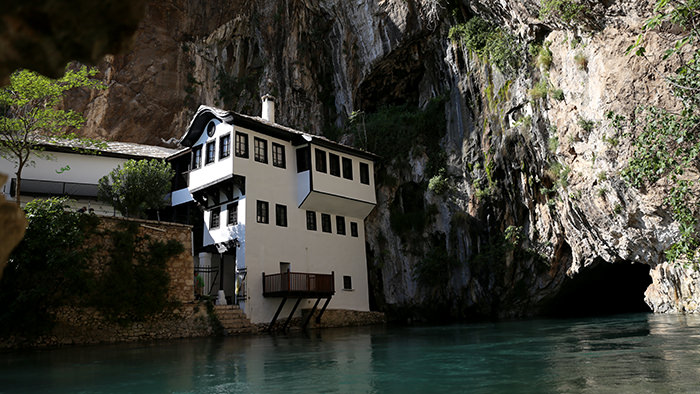 The village of Blagaj is situated only 12 km from Mostar and can be reached by bus or car. However, this is not your average Balkan village. The main attraction here is the amazing Tekija, a wooden building huddled into a niche carved out of an imposing cliff, located on the waters of the Buna river. The scenery is absolutely breathtaking! Tekija was once a Dervish monastery. Though still used for worship, visitors can visit the prayer rooms, washroom, kitchen and hammam (Turkish bath). It was built in the 1500s and has architectural elements of both Ottoman and Mediterranean style. Blagaj is special because it is literally the birthplace of the Buna River. The water of the Buna bursts out of the cliff with significant force from a natural spring. To best enjoy the beautiful spring, have a coffee at the restaurant across from the Tekija Dervish complex. WATCH VIDEO 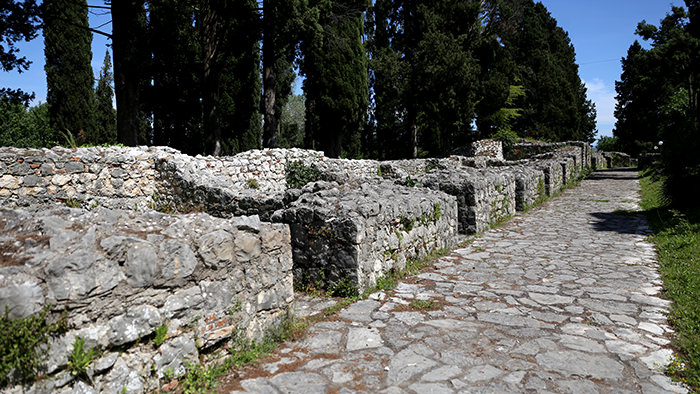 If you’re passionate about ruins or you just want to find out more about the ancient history of Bosnia and Herzegovina, a trip to Mogorjelo, the site of a ancient Roman villa rustica is more than recommended. The ruins can be found on a hill off the Nertva branch, situated 5 km south of Capljina, and date back to the 4th century. Lucky for visitors, the ruins form part of a restaurant and horse riding complex called (you guessed it), Villa Rustica. The restaurant serves up local Herzegovina wines, including its own house wine, and traditional Bosnian dishes. See our Top 60 Instagram Pics that Will Make You Want to Visit Serbia and Bosnia Now. 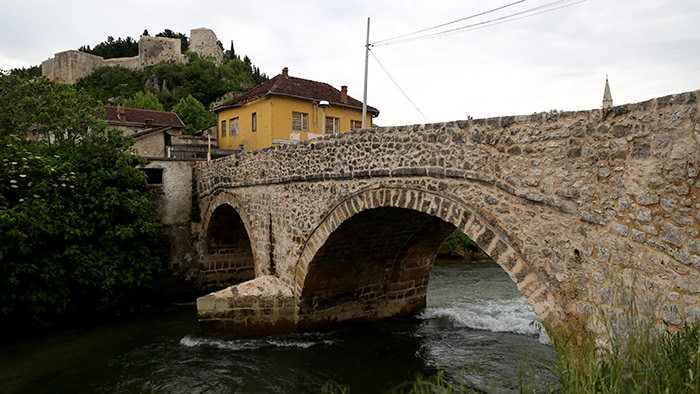 Stolac is what some may call a playground for those passionate about archaeology, anthropology and history. It is situated in the area known as Herzegovina Humina and experts state that it has been inhabited for at least 15,000 years, the markings found in the Badanj Cave dating from 12.000-16.000 BC. Stolac is also famous as being the birthplace of many intellectuals, artists and poets. Stolac is a great place to just stroll, eat figs and drink a glass of wine. Three kilometers west of Stolac is an impressive stećak necropolis dating back to the 15th and 16th centuries – Radimlja. These stećak tombstones are carved with epitaphs, detailed portraits of the deceased, and motifs such as grape vines, hunting scenes, and wild animals. Five of the Radimlja tombstones are thought to mark the graves of members of the Hrabren Miloradović family. 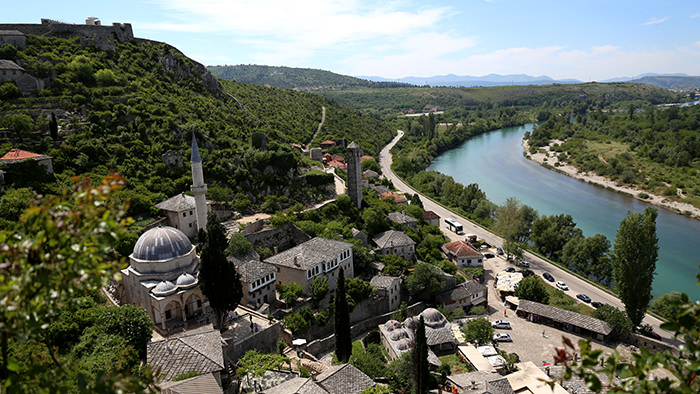 Počitelj stands out as one of the most beautiful places to visit in Herzegovina. Perched on a hillside along the bank of the Neretva River, Počitelj is the perfect place to explore by foot. The town has retained much of its Ottoman architectural elements. It is built on the slope of a hill, so the farther you move up the town, the more beautiful vistas you will enjoy. Stroll the picturesque streets, head up to the castle ruins (be careful here if you are traveling with young children as there are no hand rails), admire the old city walls, and have a Bosnian coffee in one of the town’s several quant cafés. You will encounter vendors along the way selling souvenirs and homemade sweets. The minarets of the town’s main mosque, the Hadži Alija Mosque, dominate the skyline just as it did in the 16th century when it was built. For all these reasons, Počitelj is inscribed as a UNESCO World Heritage Site. 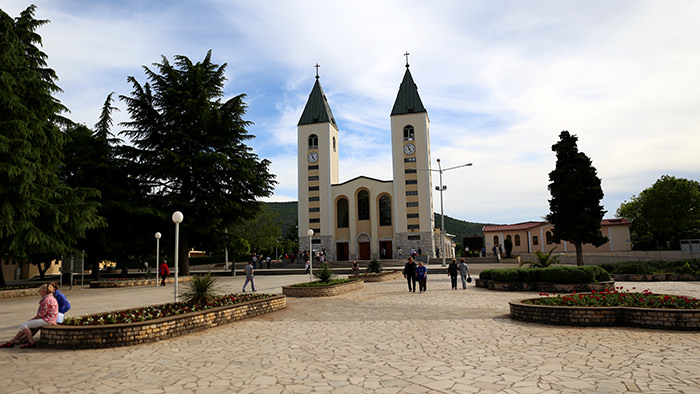 Medugorje has long been known as one of the top places to visit in Herzegovina because it is one of the largest Catholic pilgrimage sites in the world. It all started in 1981, when the Virgin Mary appeared to six local teenagers that were playing on the hills between the villages of Medugorje and Bijakovici. She continues to appear to some of them, whom are now adults. Since the 1980s, over15 million believers have come through this small town to pray to the Virgin Mary. Visitors can visit the pilgrimage site and attend a daily mass. Medugorje also attracts wine enthusiasts with its many local wineries. 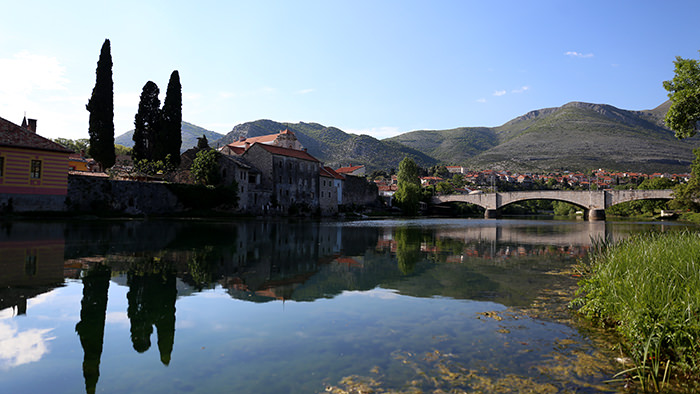 Trebinje is situated just 28 kilometers from Dubrovnik on the Adriatic Sea. It is a small town known for its local wineries and impressive Ottoman-era Arslanagić Bridge. The bridge was originally constructed in 1574 by Mehmed-Paša Sokolović and is one of the most beautiful Ottoman bridges in Bosnia and Herzegovina. When in Trebinje don’t pass up the opportunity to sample wine and delicious local food at the unforgettable Vukoje Cellar Restaurant. 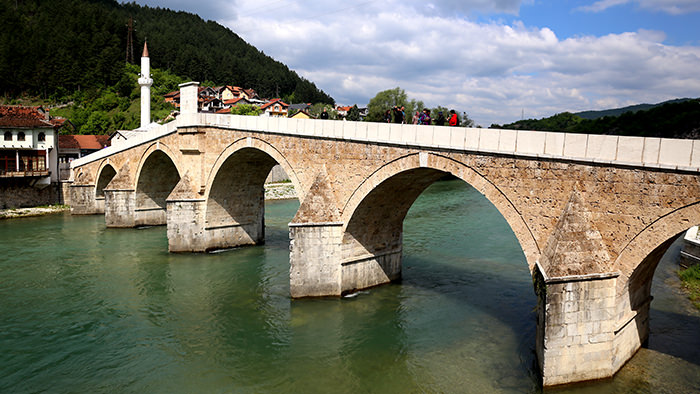 Those who love outdoor adventures and nature walks will surely love a trip to Konjic, a picturesque old town dominated by the presence of the Neretva River and Prenj Mountain. Everywhere you look during your strolls through the Old Town, the views are absolutely wonderful. The main street is lined with cafes and souvenirs shops, Konjic being renowned for its talented woodcarvers. A must see attraction is the town’s old Stone Bridge, initially built in 1682, destroyed during the World War II, and reconstructed in 2009.

Have you been to Bosnia and Herzegovina? What are your personal favorite places to visit? Leave us a comment below!

4 thoughts on “8 Places to Visit in Herzegovina”