When most travelers think of visiting the Indian state of Maharashtra, it’s the clogged and overly crowded streets of Mumbai, the country’s most populous city, that probably comes to mind. And while Mumbai is certainly a feast for the senses and boasts tons of attractions, there are also many things to see and do in Pune, a less populous city of just over 3 million that lies just 3 hours away by car. 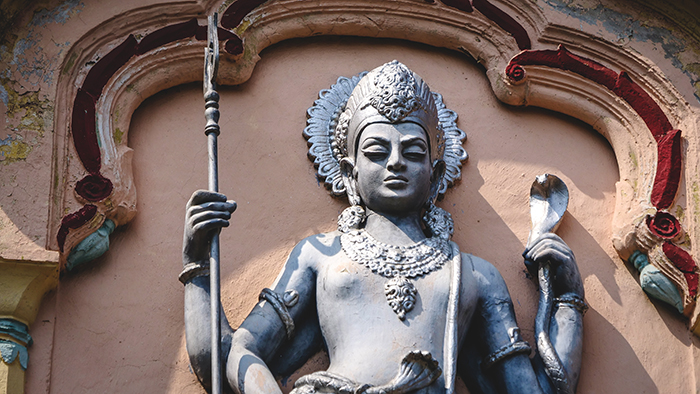 Though the first references to the Pune area date back as far as the year 758 A.D., the city’s history is largely tied to the rise of the Maratha Empire during the 17th and 18th centuries. During that time, Pune became India’s political center, and in the 19th and early 20th centuries, the British considered the city the center of opposition against their rule. 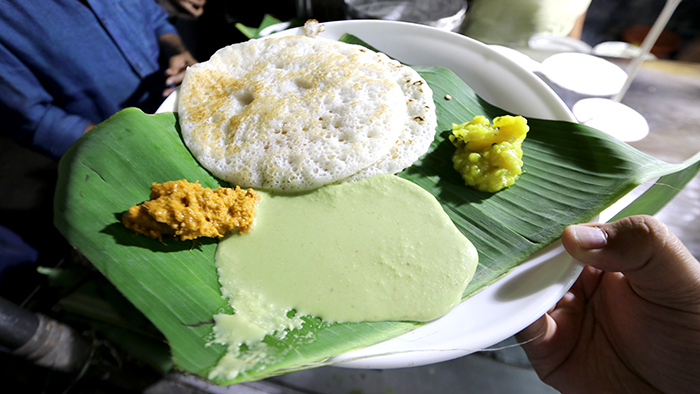 Today, Pune is considered Maharashtra’s cultural capital. It is nicknamed the Oxford of the East because of the many universities and research institutes scattered around the city, which attract students and professionals from all over the world. The city is also rife with beautiful and scenic attractions, as well as countless restaurants and street food stalls where you can find some of the best Maharashtrian food I’ve ever had. These are the top 5 things to see and do in Pune, India. 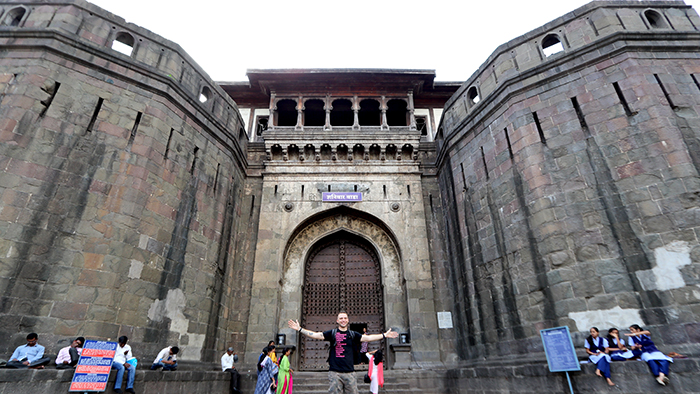 Without a doubt, one of the best things to see and do in Pune is to visit Shaniwar Wada. This imposing, fortified palace found itself at the center of Indian politics in the 18th century. At least a thousand people lived there by 1758. 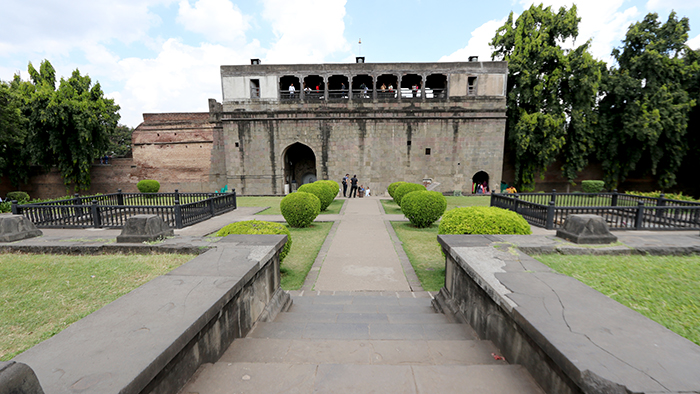 The fortress also served as the seat of the Peshwas of the Maratha Empire from 1730 until the British East India Company took control of Pune in 1818. The fortress complex’s palace buildings and magnificent fountain were destroyed in a mysterious fire in 1828.

Check out 10 Places You Must Visit in Northeast India 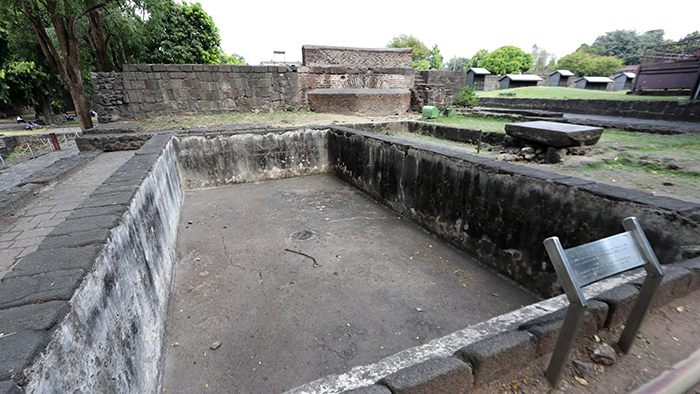 Built in the Maratha Imperial architectural style, this historical stone-and-brick capital building originally consisted of seven stories. The top six stories collapsed after the fortress was attacked by the British Artillery, leaving only the stone base intact. 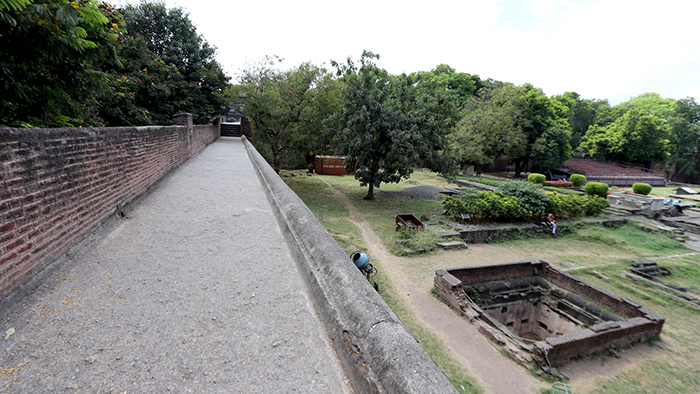 Today, the complex’s five gorgeous gates, including its main gate, Dilli Darwaza, can be seen. The doors of Dilli Darwaza are downright massive, as they were built large enough to let elephants with seating canopies to pass through. 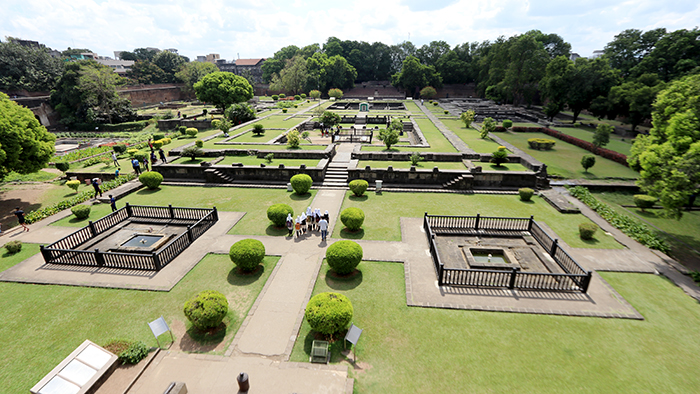 One of the best things to do at the fortress is to climb its steep, narrow staircases up to the tops of the complex’s walls. You can feel the centuries of history o as you walk atop the walls of Shaniwar Wada and take in its sights. Visiting it is a must for any history lover! 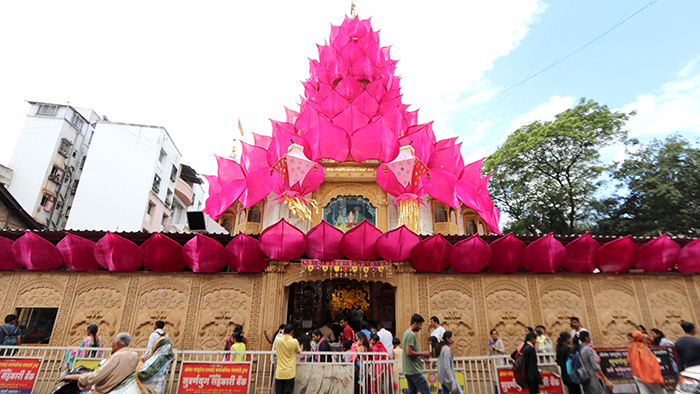 When you visit India, taking a dive into local culture is one of the best things you can do. There’s no better place in Pune to immerse yourself in the Hindu religion than stopping by Shreemant Dagdusheth Halwai Ganapati Temple, a stunning, nearly 130-year-old house of worship in the center of the city. It was built by a confectioner named Shri Dagdusheth Halwai and his wife, Lakshmibai, after their son died during a plague epidemic. 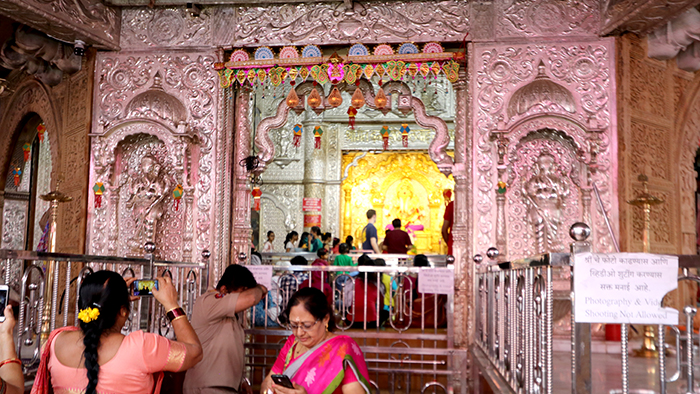 The temple is dedicated to Lord Ganesh, the elephant-headed god who also goes by the names Ganapati, Vinayaka, and numerous others. Inside the temple is a gilded Ganesh idol that is so large and ornate, it can be seen from outside. This beautiful statue stands over seven feet tall and eight feet wide. It is also decorated with 8 kilos of gold and is said to be worth over 10 million rupees, or roughly $150,000 U.S. 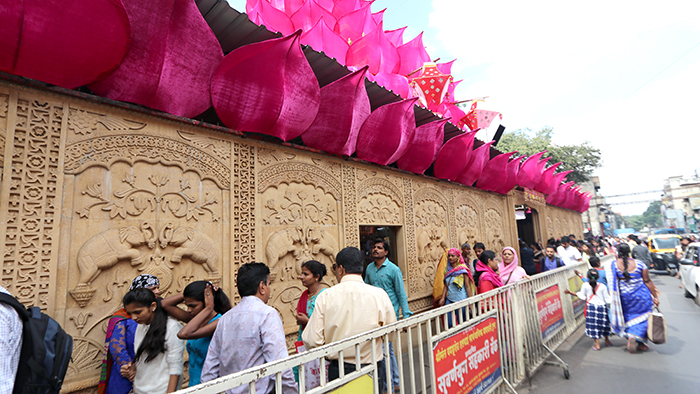 Devotees at the temple can honor Ganesh by offering him gold, money, and coconuts. After you take a moment to marvel at the stunning architecture, attend the daily pooja, abhisheka, and the aarti to experience one of the best things to see and do in Pune! 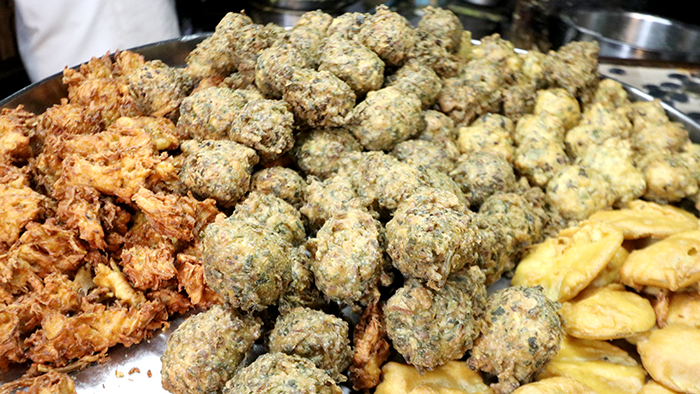 No trip to Pune is complete without enjoying some mouthwatering Maharashtrian street food. For some of the city’s best, I highly recommend heading over to JM Road after nightfall for a delicious dinner adventure you will never forget! Be sure to arrive hungry and investigate each food stall; there are a lot of things to try! 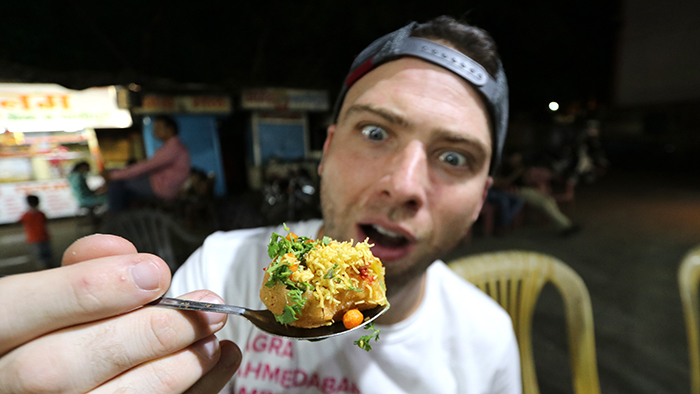 One food you must try at JM Road is a colorful dish called Masal Puri. This dish consists of hollow, unleavened, deep-fried bread balls called puris, which are then filled and topped with a hot masala gravy containing puffed rice, green peas, chili powder, chaat masala, garam malasa, onions, tomatoes, and more. It is fresh and crunchy and bursting with flavor without being too spicy. 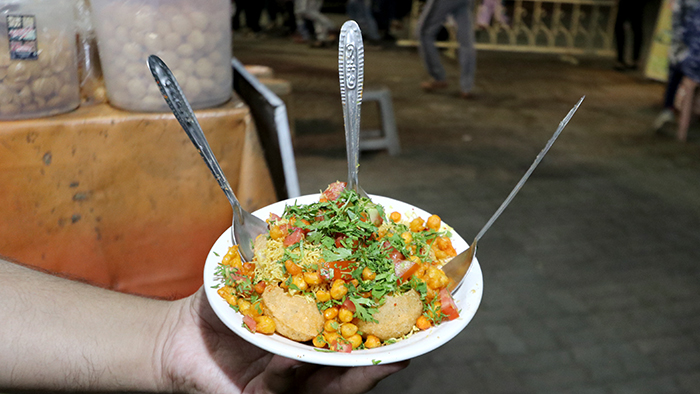 The traditional Pani Puri, which consists of a punctured puri that is filled with a delicious, minty curry that contains chili, tamarind chutney, chaat masala, onion, and potatoes, is one of my favorite Indian dishes of all-time and is a must-try.

Check out 10 Indian Street Foods You Must Eat in Jaipur, India 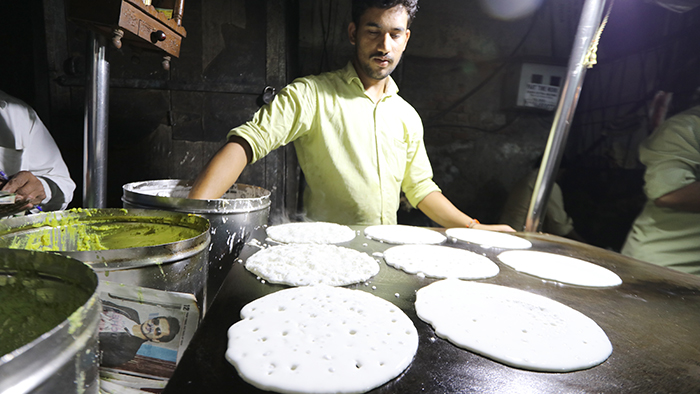 I also highly recommend the sponge dosa, a light and spongy pancake-like dish that is served with a spicy tomato-garlic chutney, a potato mash, and a tropical mint-coconut chutney that made my taste buds sing! It’s one of my favorite dosas of all time! 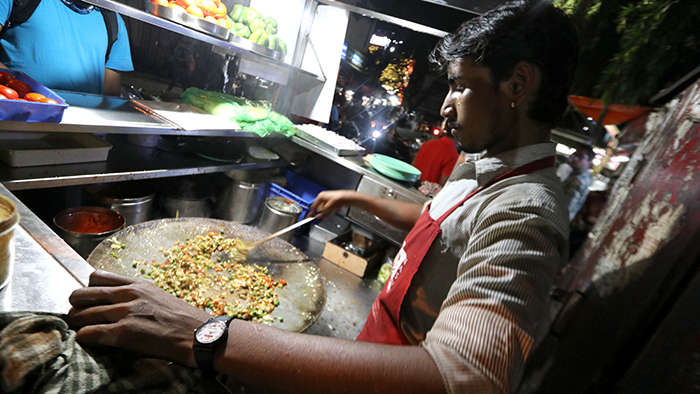 Finish up your dinner street food tour with some Tawa Pulao, a spice-filled rice dish that contains green peas, onions, tomatoes, and pav bhaji masala powder. It’s a somewhat spicy dish that’s not overbearingly hot. The rice in mine was cooked al dente and still had some bite to it, which was really nice. 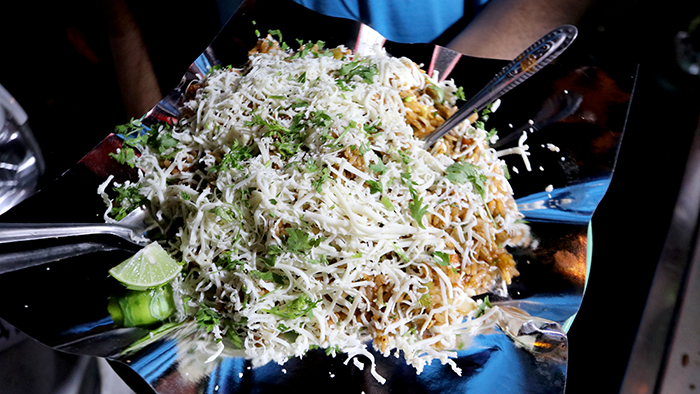 Grab a refreshing and creamy buttermilk before you leave; it’s the perfect way to cool down on a hot Pune night, and the dairy in it will calm any heat lingering in your mouth and throat and settle your stomach. A street food experience at JM Road is easily one of the top things to see and do in Pune!

Visit the Temples of Parvati Hill 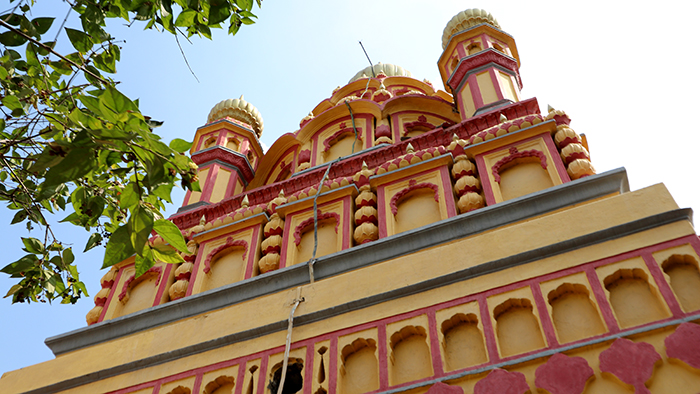 If you don’t mind taking a steep and strenuous hike during your time in Pune, you may want to visit Parvati Hill, a 2,100 foot-high hillock that offers breathtaking panoramic views of the city. Atop the hill are five stunning temples, including Devdeveshwara Temple, the oldest heritage structure in Pune. 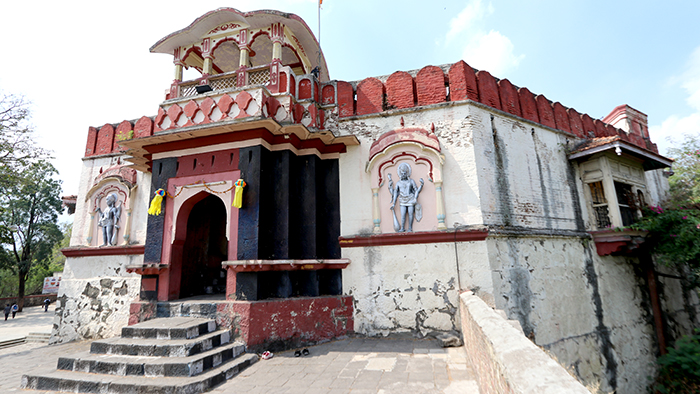 If you’re going to attempt the hike up Parvati Hill, I highly recommend getting into good shape first. I’m in pretty good shape and it was still tough for me! The easiest way to climb to the top is to ascend the 103 steps that have been carved into the ground.

Check out Things to See and Eat in Lucknow, India 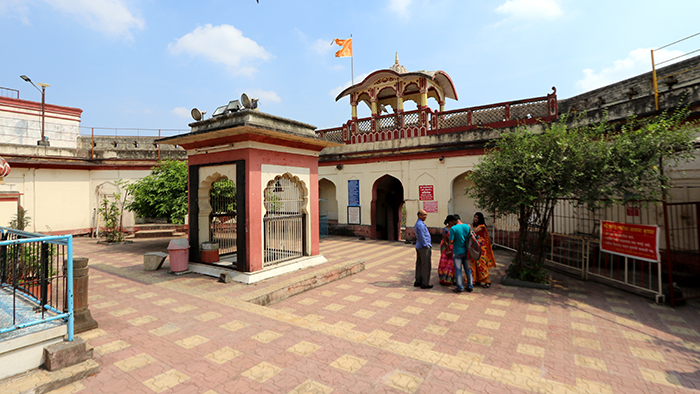 I suggest taking some cold water with you and trekking at your own pace, as the hot sun will be beating down on you as you make the climb. 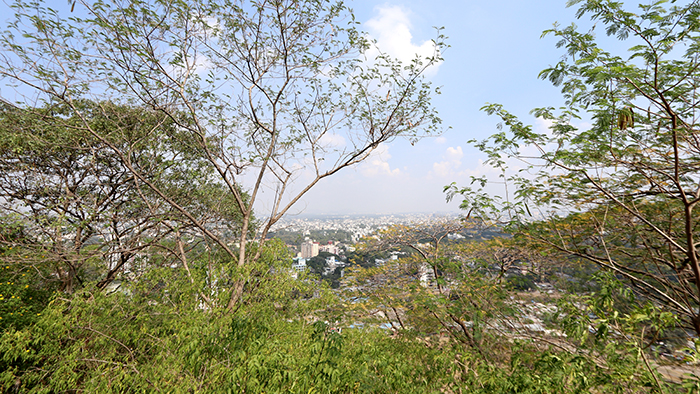 Making it to the top of the hill is worth every bead of sweat and every sore muscle, though. Along with the blackstone Devdeveshwara Temple, which was built during the Peshwa Dynasty and is dedicated to the Hindu deities Shiva and Parvati, you’ll also find gorgeous temples dedicated to the gods Vishnu, Kartikeya, Vitthal, and Rama. The temples open at 5 a.m. and close at 10 p.m., so you have all day to see them! 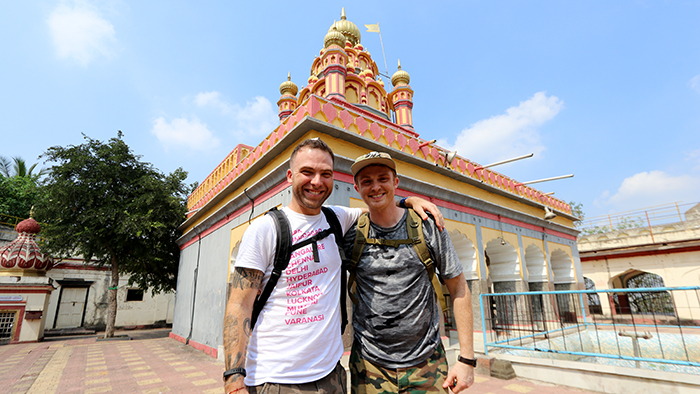 As if that wasn’t already enough to make Parvati Hill one of the best things to see and do in Pune, the hillock is also home to the Peshwa Museum and an unfinished Buddhist cave. If you love learning about local culture like me, take a couple of hours to explore Parvati Hill. You won’t regret it! 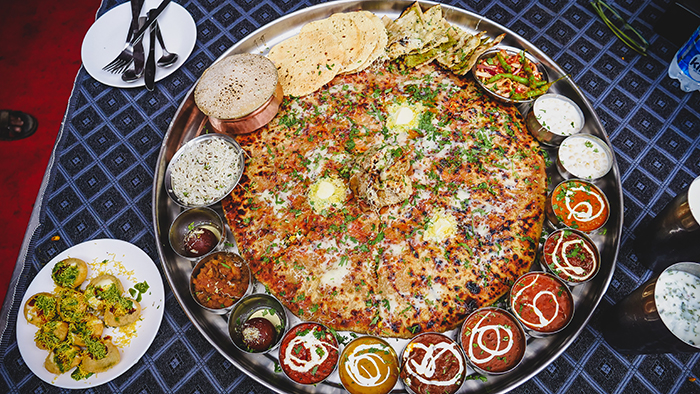 If you’re visiting Pune with a group of friends or family (or if you just have a big appetite like me), be sure to visit House of Paratha, a fantastic restaurant where you can share the biggest thali in the city. Or if you’re like me, keep it all to yourself and see how far you get! 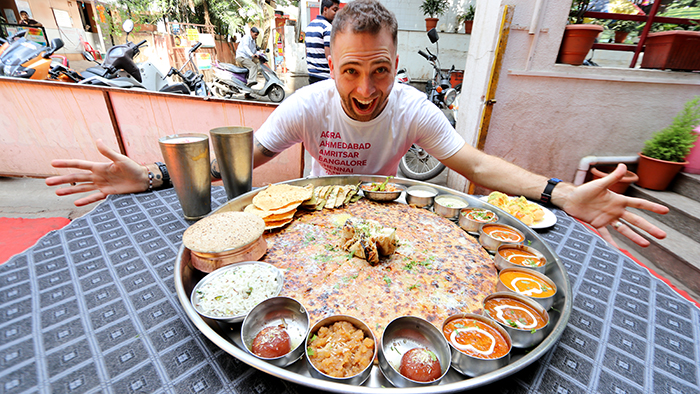 This monstrous feast, called the Bahubali Thali, consists of a massive, stuffed paratha (a type of flatbread) that is a whopping 20 to 22 inches in diameter and is meant to serve five or six people. 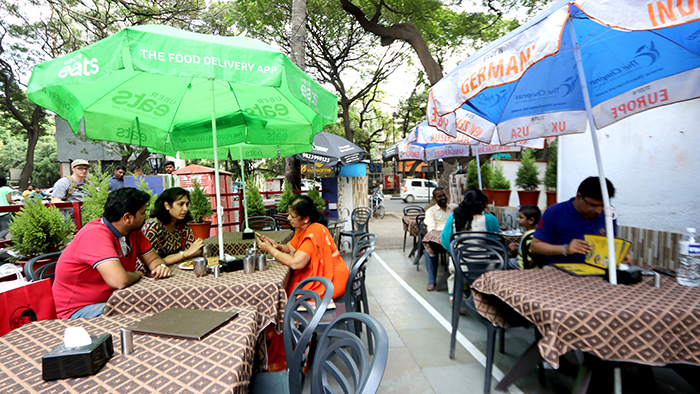 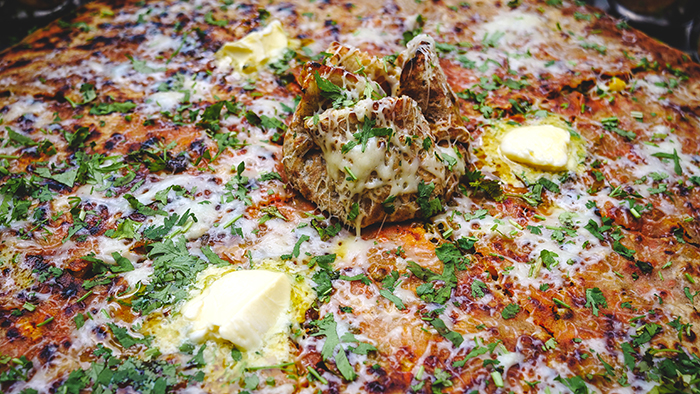 Indian food lovers will be in culinary heaven when they try this dish. The paratha is spicy and full of signature Indian flavors and the dips were outstanding. My personal favorite was an earthy, tomato-based one that contained carrots. The entire dish ranged in flavor from spicy to earthy to tropical. 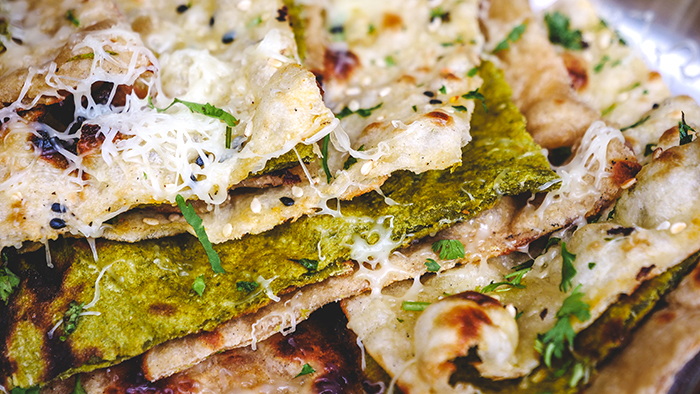 Even if you don’t finish the whole thing, you’re bound to find something in this thali that you’ll love. It’s one of my favorite dishes I ate in Maharashtra and should most definitely be on your list of the top things to see and do in Pune! 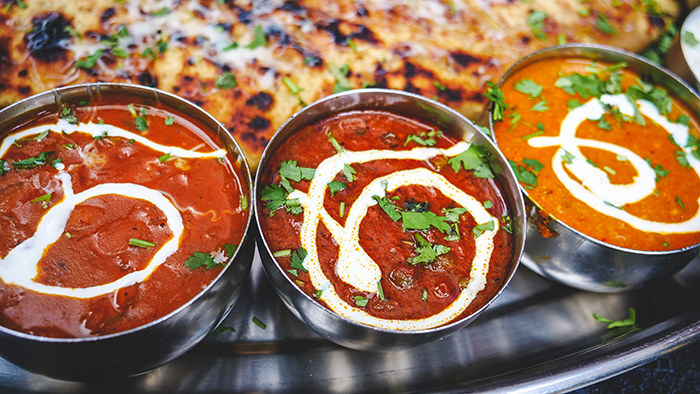 The Maharashtrian city of Pune is a food and culture lover’s paradise. With so many incredible sites to visit and an abundance of new flavors to enjoy, even a quick visit should be enough to create memories that will last a lifetime. Book a trip to Pune today to see for yourself! 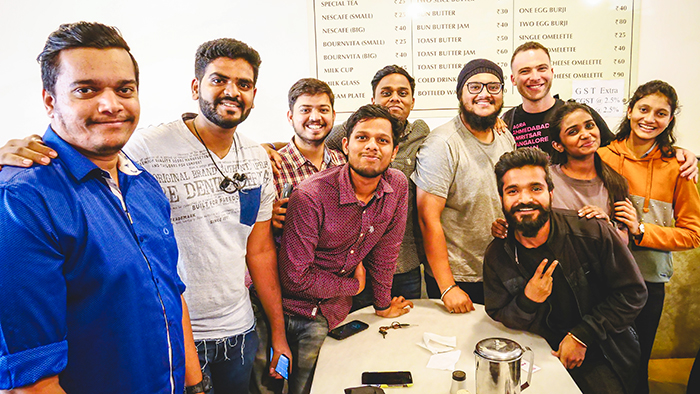