Day six in beautiful Kerala, India continued in the gorgeous hill station of Munnar, where I had the amazing opportunity to cook a spicy Indian jungle food lunch with local ingredients and Kerala highland spices in one of the most beautiful locations in India! Come along with me on my latest gastronomical adventure in Munnar, Kerala, India!

I was in for an amazing and mouthwatering afternoon in Munnar! Munnar is the tea capital of southern India, and our hotel, the Dream Catcher Resort, stands right in the middle of a tea plantation! My boy Ebbin and I would be heading off into the jungle on a beefed-up go-kart and cook some incredible, spicy south Indian food! 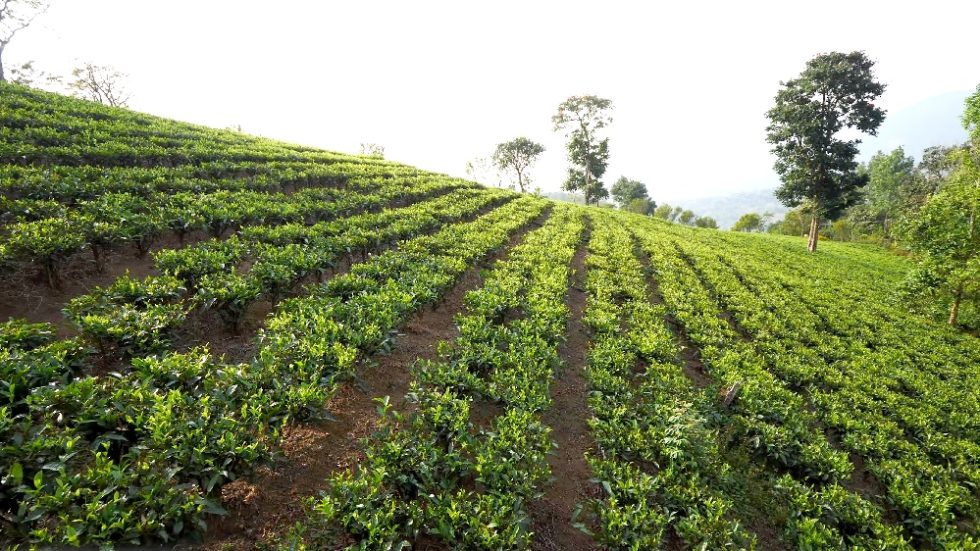 I had to hold on, as the dirt road up in the hills was super bumpy. Thank God I had on a tight seatbelt. We rode through a never-ending cardamom field. This area is green and beautiful and has wonderful weather, so it’s a prime honeymoon destination for couples around the world! 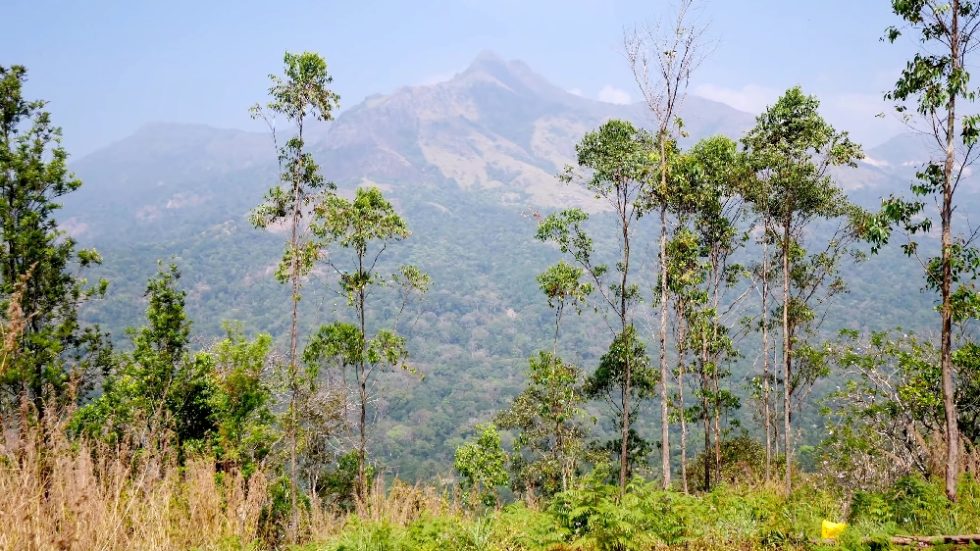 We arrived at the site. It was super dry. From there, we had a spectacular view of the second-highest peak in south India! I also met the cooks there, who were cleaning up some goat. We’d be making beef fry, beef liver roast, mutton, kanthari chili prawns, and more. To spice them, we’d be using local spices like garlic, ginger, star anise, bird’s eye chilies, and much more. This would be the ultimate non-veg feast! I hadn’t tried most of these dishes and I couldn’t wait!

In the meantime, I tried a bird’s eye chili, which was so spicy it made me cough! I could already tell this Indian food in Munnar, India was going to be super hot! 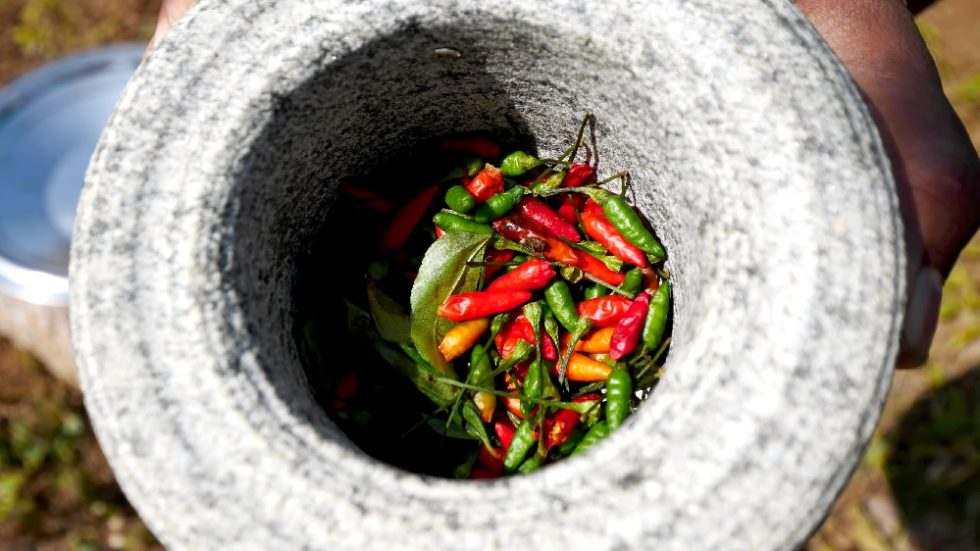 All of the spices and chilies come from their own plantation. There were so many of them. I was so hungry! They began chopping and mashing the vegetables, including more chilies, tomatoes, shallots, ginger, garlic, curry leaves, bird’s eye chilies, and basil leaves. It smelled super potent! 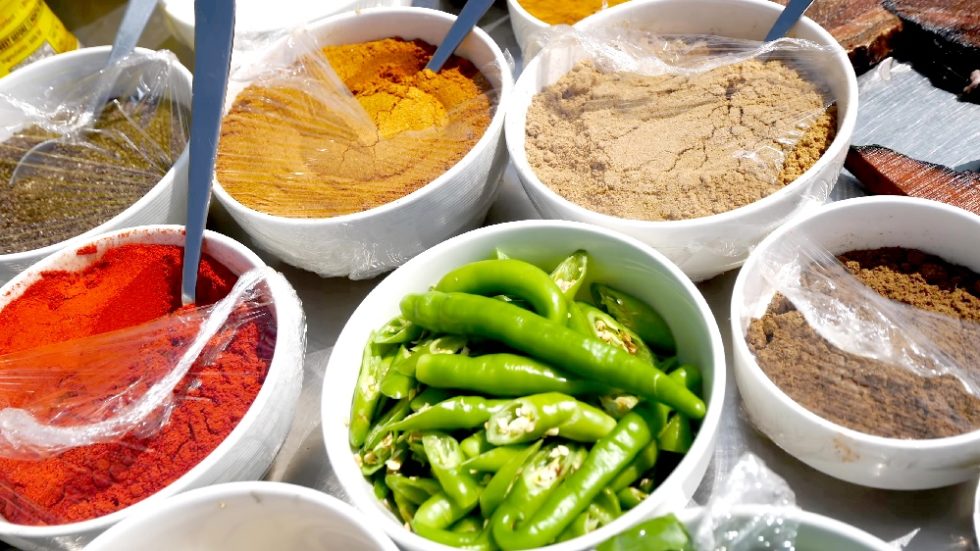 Then, they added the prawns into the masala with salt and coconut oil and mixed it together on a banana leaf. The cook also squeezed lemon juice on top and mixed it all together. He wrapped it up in the banana leaf and put it on the fire. Our dessert—pumpkin payasam—would consist of pumpkin, cashew, jaggery, and raisins. 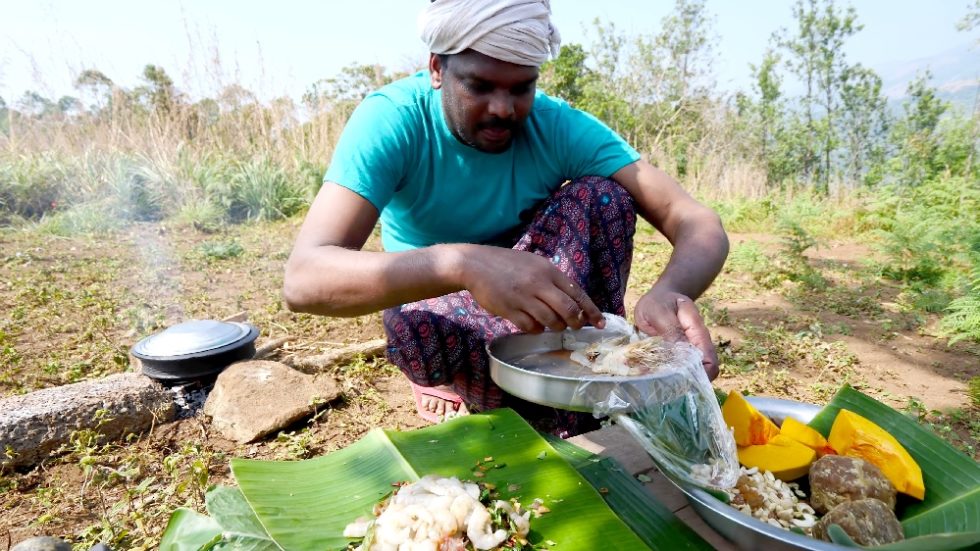 They started with coconut oil in the pan and added fennel seeds, cumin, cardamom, and cinnamon. Then, they added crushed ginger and garlic. To that, they added green chilies, curry leaves, onions, and salt. It was basically a stir-fry for the goat. Then, they added some Kashmiri chilies, black pepper. 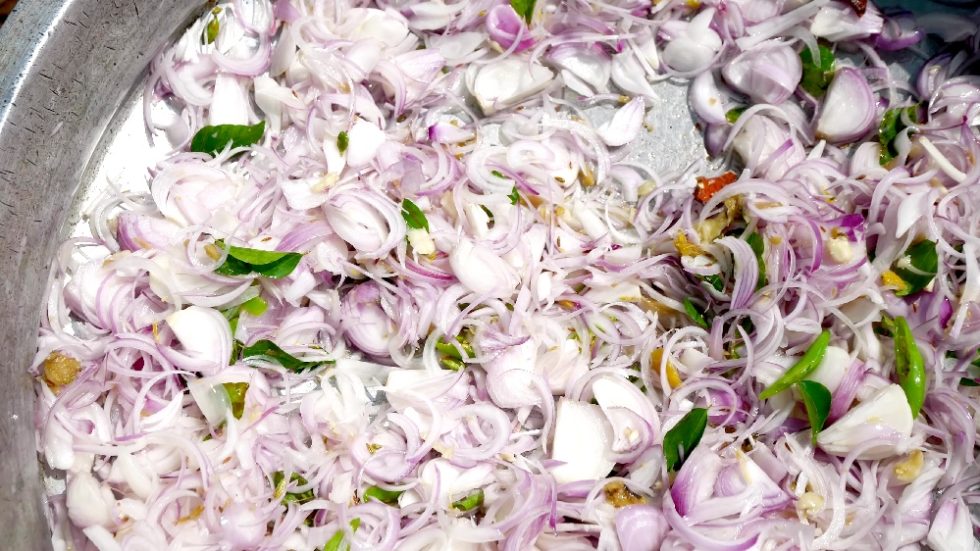 I tried some of the pepper. It wasn’t too spicy and was nice and mild. Then, they added mead masala, which is a mix of a variety of spices, and turmeric. The smoke and aromas were hitting me in the face! Then, they added sliced tomatoes! 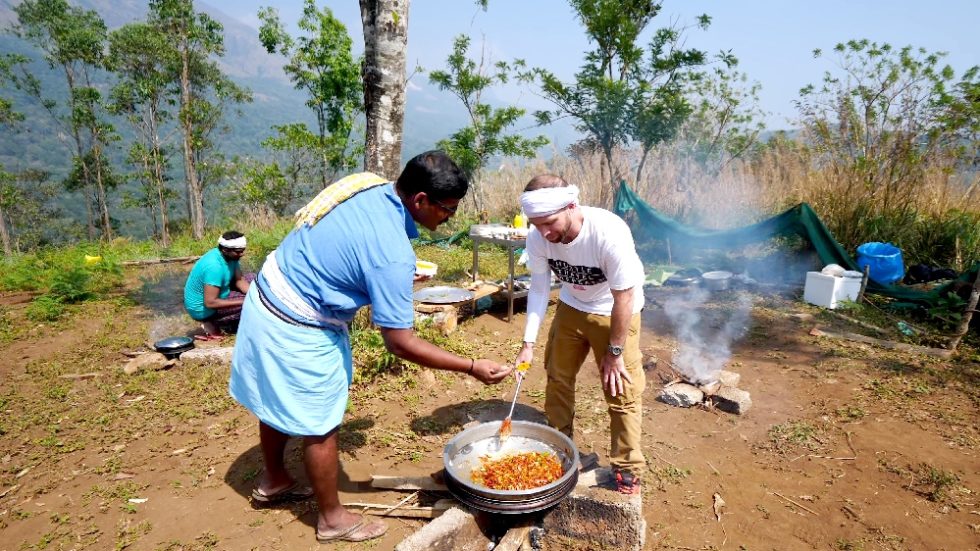 Ebbin showed me the plate we’d be eating off of, which was a piece of wood from the areca nut tree. Meanwhile, they added a bit of water to the stir-fry and then added the raw goat legs and covered them in the mixture. While we waited, Ebbin gave me a fresh tomato to try. It was full of juice and was perfect!

Then, they started on the Kerala beef fry. They added salt, turmeric, black pepper, chili powder, Kashmiri chili powder, mead masala, coriander powder, green chilies, curry leaves, and water to the cubed beef. He mixed it with his hands and added coconut oil to cook it for 10-15 minutes. Then, they added more water to the goat and let it cook more. 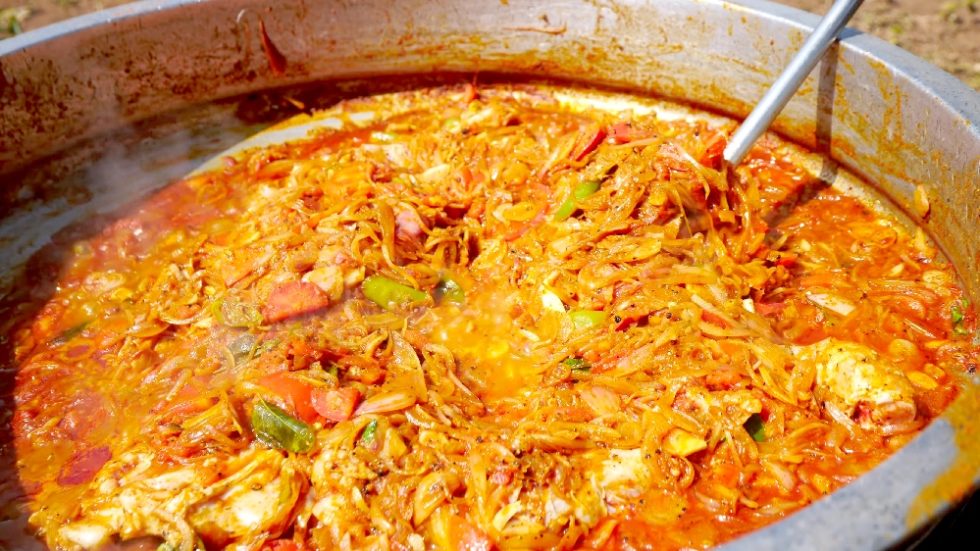 In a pestle, they added black pepper, cardamom, garlic, ginger, and more, and mashed it up with the pestle. The cook added the mixture to some boiling water. We went through the process of each dish. The goat takes about 1 hour to finish. We had at least one more hour to go before everything would be done. 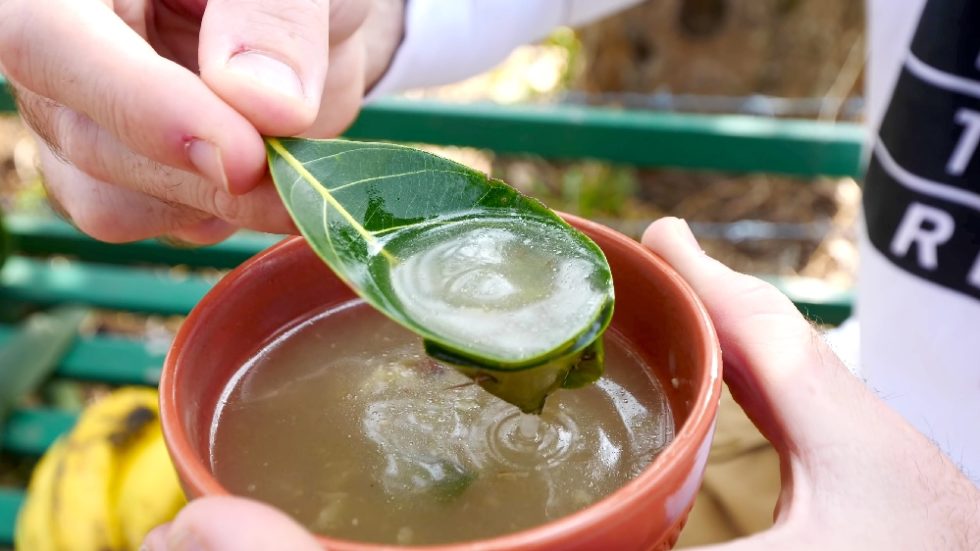 They put the beef pressure cooker on top of the fire where the prawns had been cooking. We had 30 minutes for it to cook. Then, the mutton soup was ready! I was using a jackfruit leaf as a spoon. The mutton broth with all the spices was so tasty. It wasn’t spicy at all. It was straight-up herb and mutton flavor. I could taste the ginger and the curry leaves. It also contained nice chunks of meat, cardamom, and peppercorns. Honestly, it would be amazing to have after a hangover. It had to have been the healthiest soup I’ve ever had. Everything was so fresh! 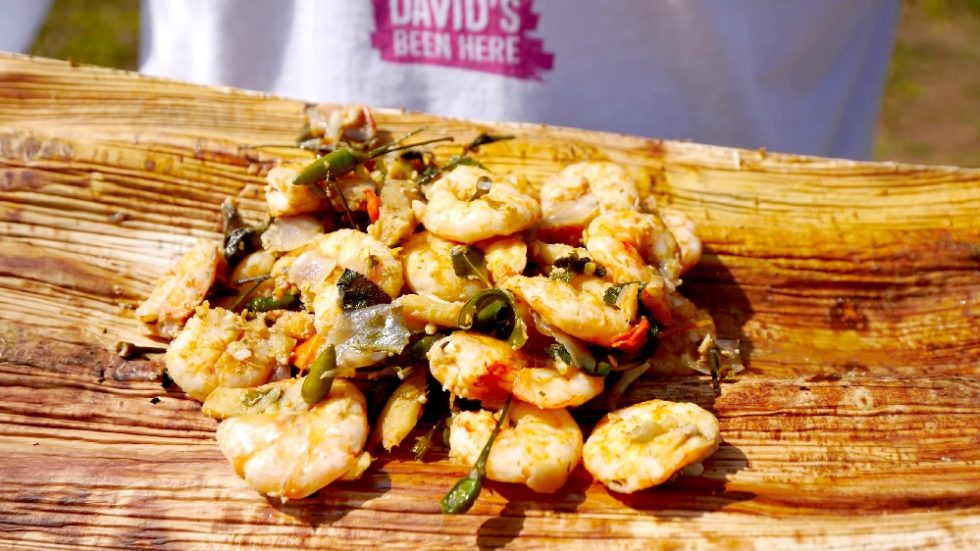 Meanwhile, Ebbin got a bay leaf to use as a spoon. It was his first time having this mutton soup, too!

Check out my VIDEO: First Impressions of Munnar – The Tea Capital of South India in Kerala, India

Finally, the shrimp were ready. I couldn’t wait to eat them. They looked so good! I had them with bird’s eye chili on the areca nut wood. Then, I tried a shrimp without the chilies first. It was so succulent, buttery, and spicy! They were so soft and tender that they fell apart in my mouth! 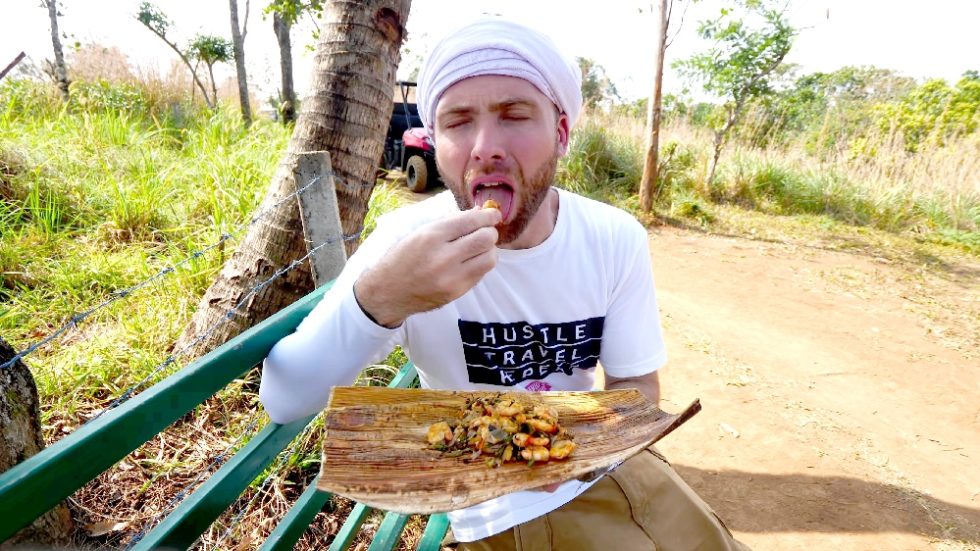 Then, I tried a shrimp with the bird’s eye chilies, which hit me right away. I loved the spices throughout! There were also seeds, spices, and garlic in it. I squeezed some lemon on top to add some acidity. It was so spicy and shrimpy! It was one of the spiciest seafood dishes I’d ever had in my life! My tongue was going to be numb later! 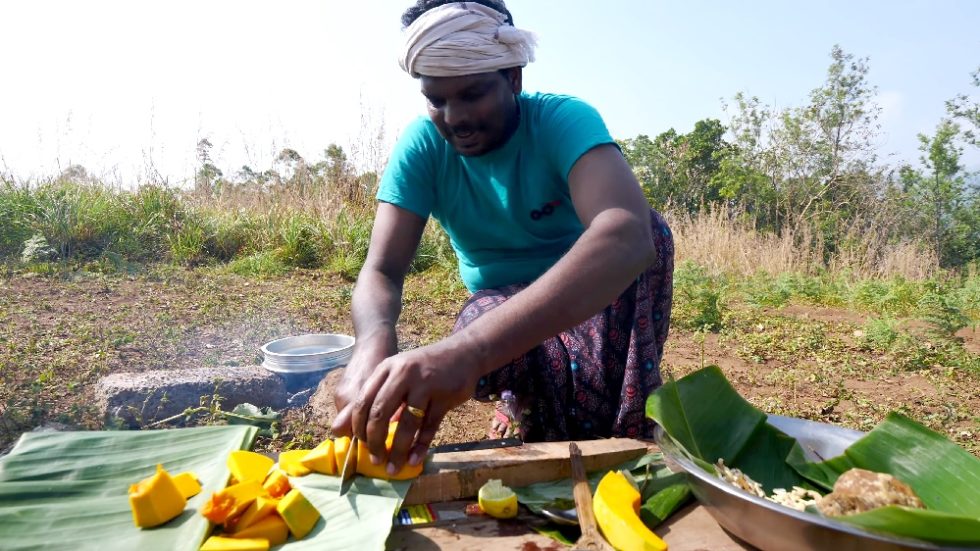 Next, they started building the pumpkin paysam by adding the raisins and cashews to some ghee. The goat was ready as well! They let it rest for a half hour and started on the beef liver fry. They started with coconut oil and added cinnamon, cumin, fennel, lemon juice, garam masala, and black pepper. The final ingredient he added was coriander leaves. The mixture had turned a rich, reddish brown and the aromas were popping even though I could barely smell anything from the heat still in my mouth! 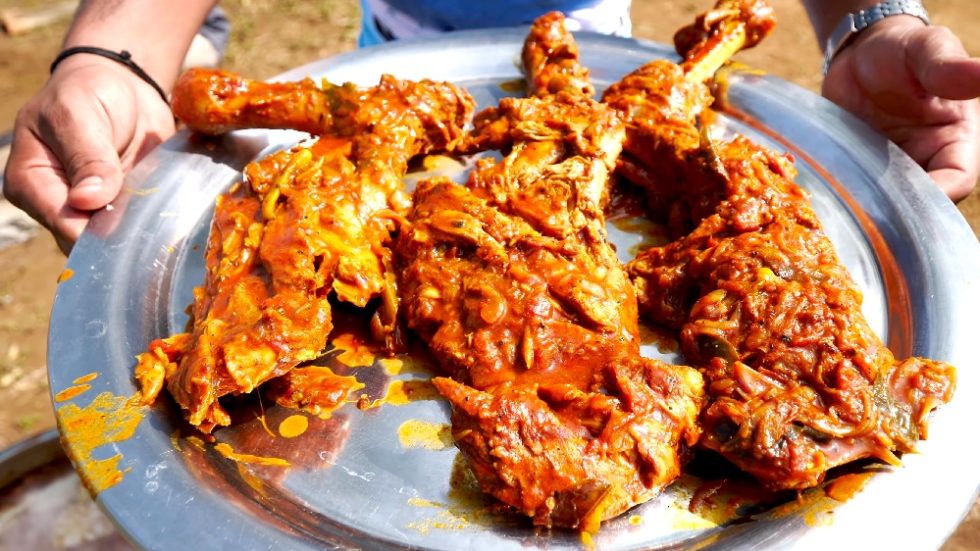 Check out the 25 Indian Street Food Dishes You Must Eat in Kerala, India

They placed the goat in a banana leaf with the masala and wrapped it up, and then placed the packages on a grill over the fire. The also would have some rice with lots of ghee in it. 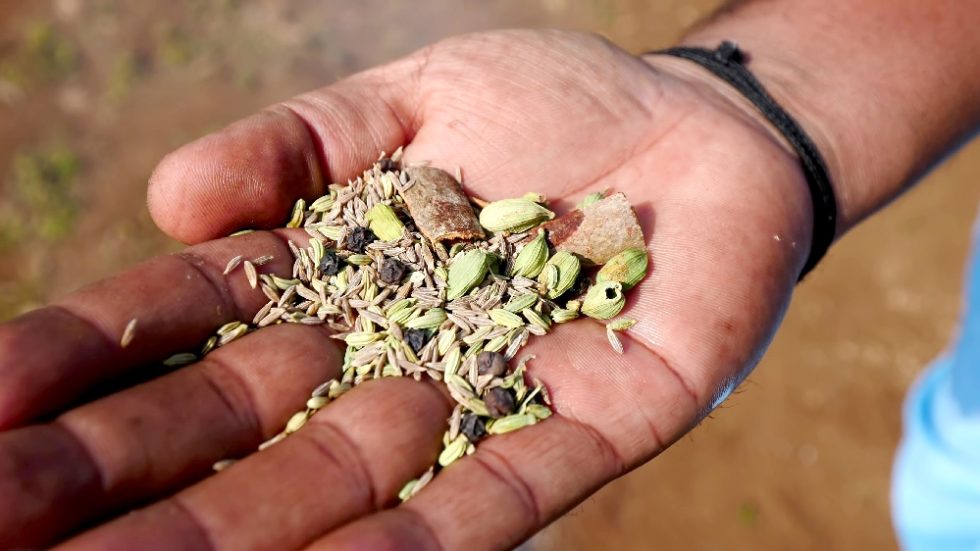 I cut some goat leg for myself. It looked so good, I had to try it right away! It just evaporated in my mouth! The masala wasn’t too spicy and there was so much meat on the bones! I picked up the entire leg and just bit right into it. It was the best goat I’ve ever had! I loved the rich tomatoes and onions in the masala. I went to town on it! That was only the first course! 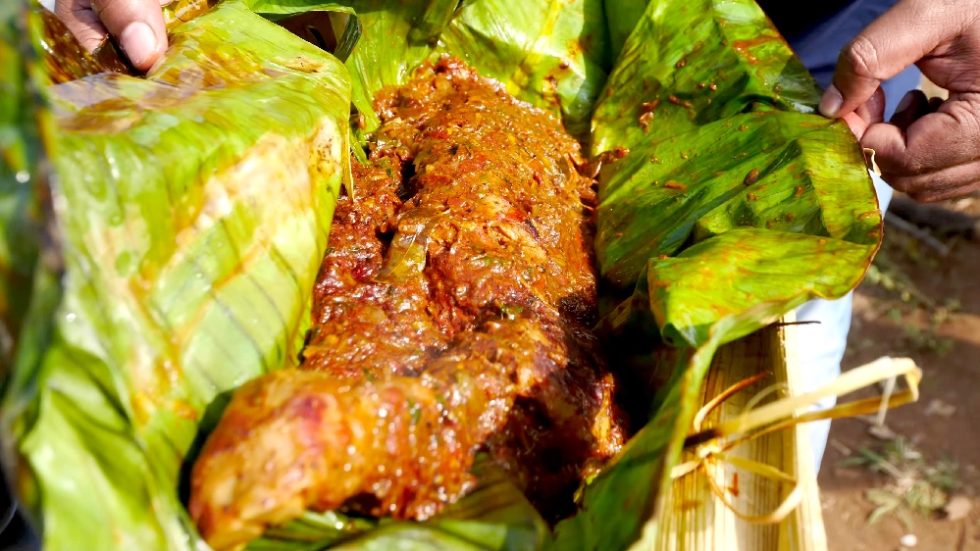 Then, I tried the beef liver roast. I could see the peppercorns in it. I grabbed some ghee rice and a bit of the beef, which was unbelievable. The liver is my favorite internal organ to eat because it’s dense but easy to bite through. It’s also creamy. And this Indian food in Munnar, India was really hitting the spot. 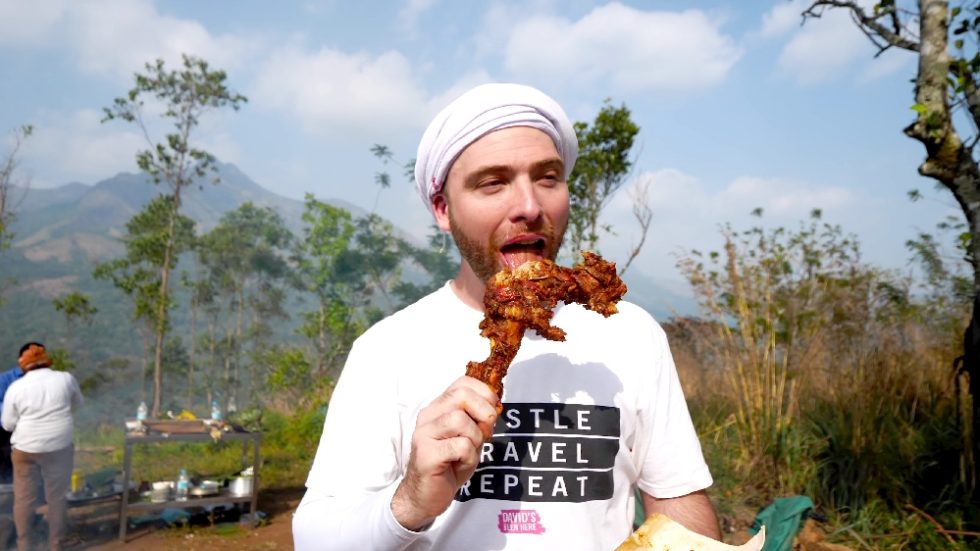 For dessert, I dug into the pumpkin payasam. It was like a pumpkin pudding and helped cool down the heat! What an unbelievable meal. Everything was natural and local and so delicious! 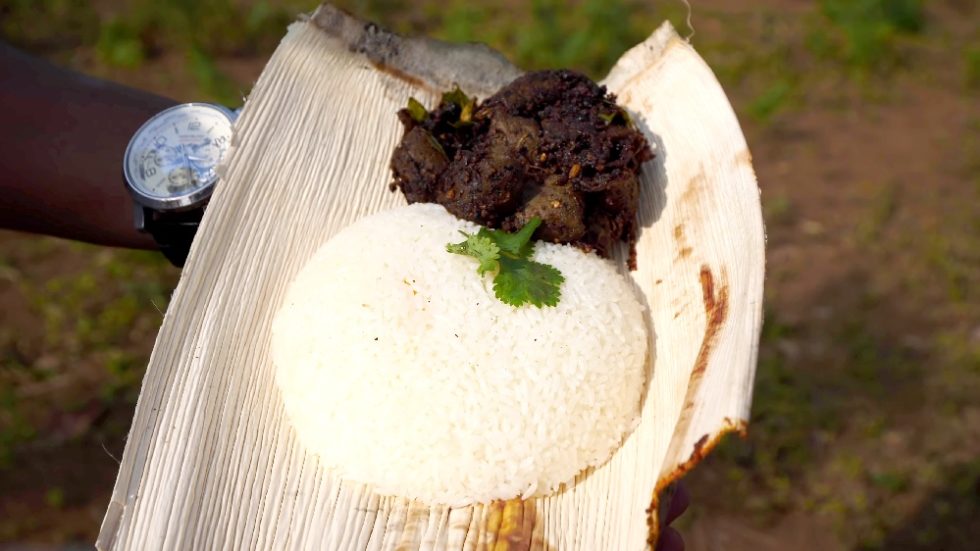 Then, we headed back to the Dream Catcher Resort, where I needed to get a massage! My back was killing me! We headed up to the fourth level, where there’s a hanging bridge that overlooks the tea plantation. It was so cool! I had never seen a resort like this! I could see a sundeck and a watchtower. There’s also a pool! With the forests, mountains, and tea plantations, it was really gorgeous!

We headed up to the sundeck and then I went down to the spa in the main building. They also have a restaurant, a game room with ping pong and foosball. 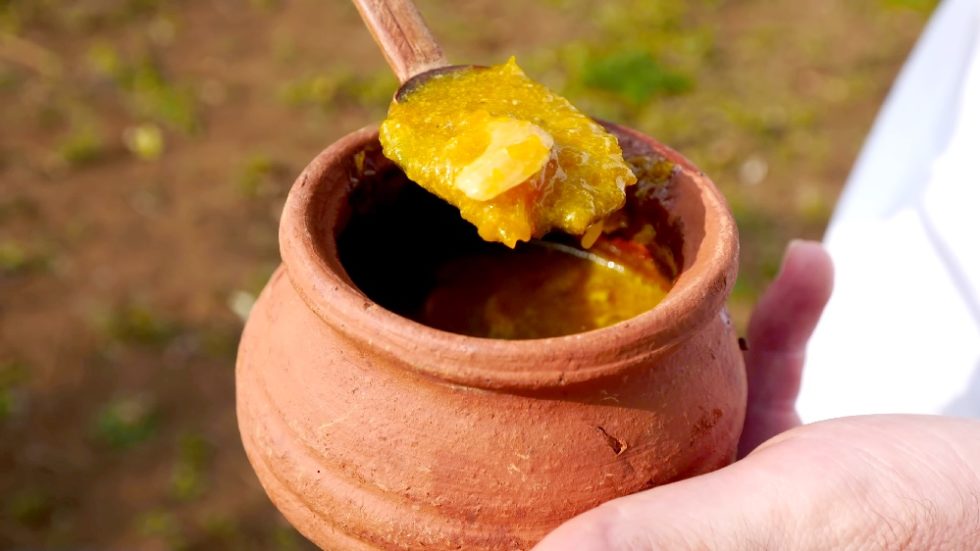 A massage costs 2,000 rupees/$25.77 USD for one hour. It was amazing! It was a full-body massage in a steam room. There was a steam box behind us. My head was hurting, so I he would get my head for 15 minutes, and then get my back, legs, and arms. I love massages. They’re the best thing to do, especially when you’re traveling. 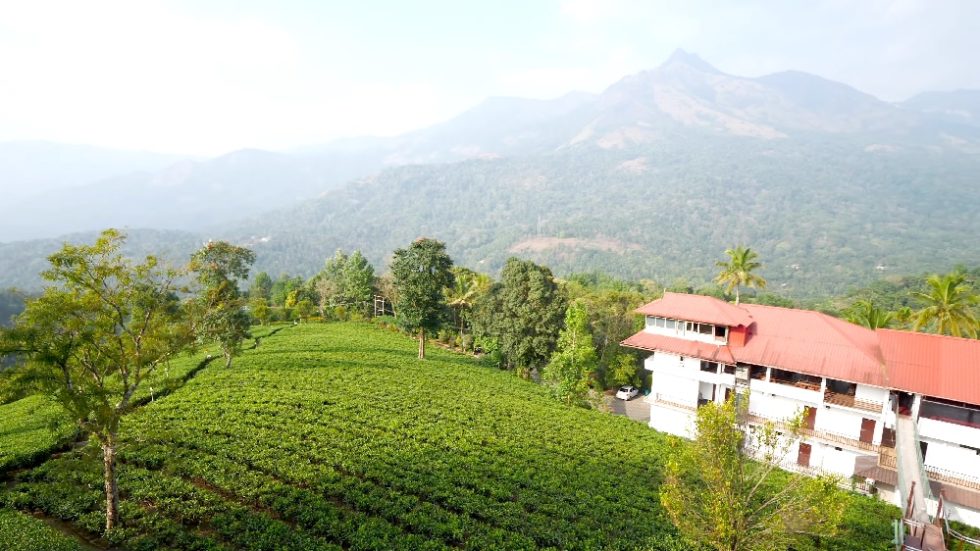 I felt so at ease after having one of the best meals of my life! That spicy Indian jungle food in Munnar was one of my favorite meals ever in India. What a relaxing massage and outstanding day. Huge thanks to my boy Ebbin for bringing me out here. Be sure to subscribe to his YouTube channel and follow him on Instagram. Also, find out how to book a stay at the Dream Catcher Resort by checking out their website! 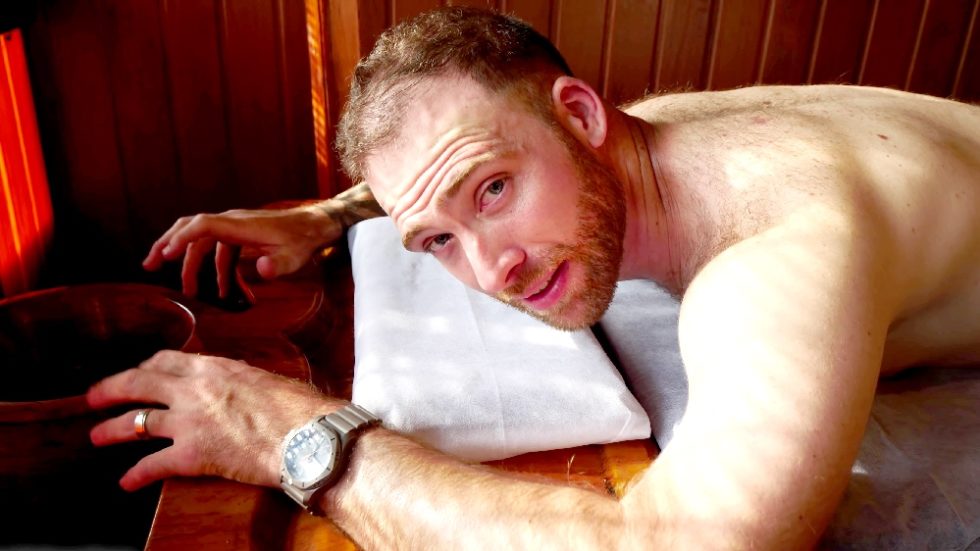 I hope you enjoyed coming with me to cook spicy Indian jungle food with Kerala highland spices in Munnar, India! If you did, please give this video a thumbs up and leave me a comment below. Also, please subscribe to my YouTube channel and click the notification bell so you don’t miss any of my travel/food adventures around the world!