As my day in Khiva, Uzbekistan wound to a close, I had the amazing opportunity to enjoy some Khiva style Uzbek plov, inside the ancient walled city and watch some beautiful traditional music and dance performances! Come along with me as I dive deeper into this incredible ancient city! 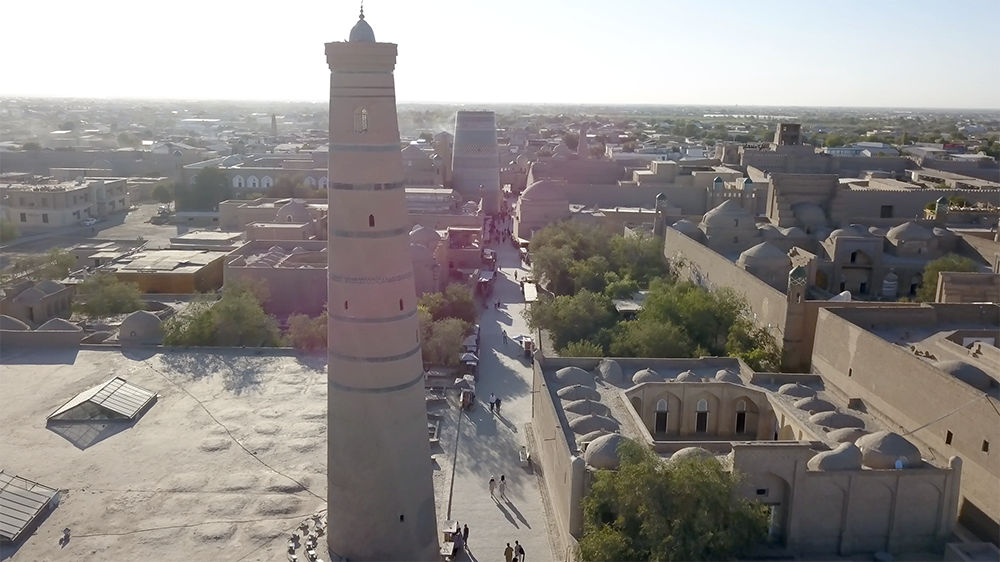 My final adventures in Khiva began in Itchan Kala, the walled inner town of this 2,500-year-old UNESCO World Heritage City. There were so many things to see in such a small area. The walled city contains a whopping 54 historical sites in total, including mosques, madrasas, minarets, and much more! 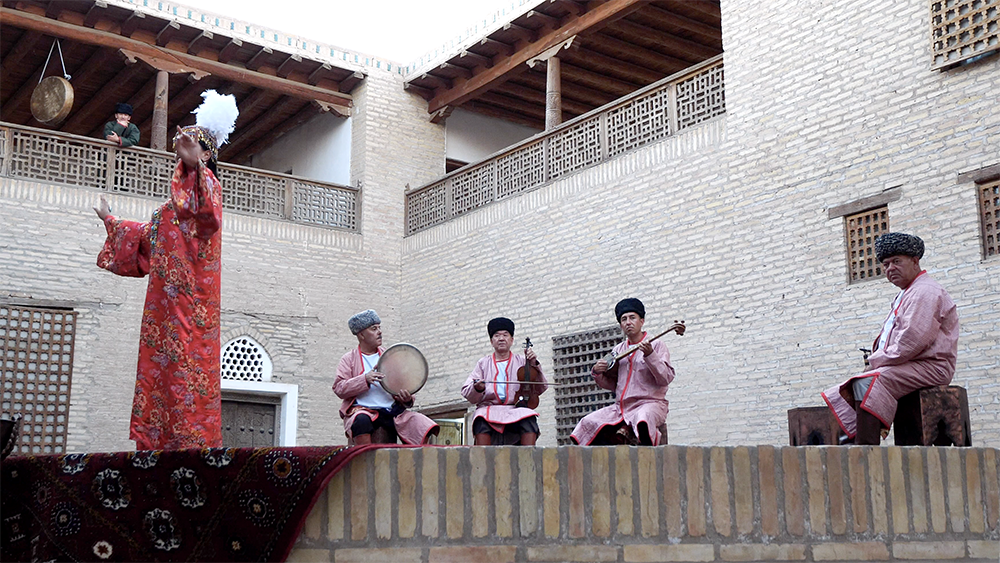 There, I got to watch a beautiful traditional music and dance performance. We only got to see about two minutes of it because we got there late. We would have joined in and danced! 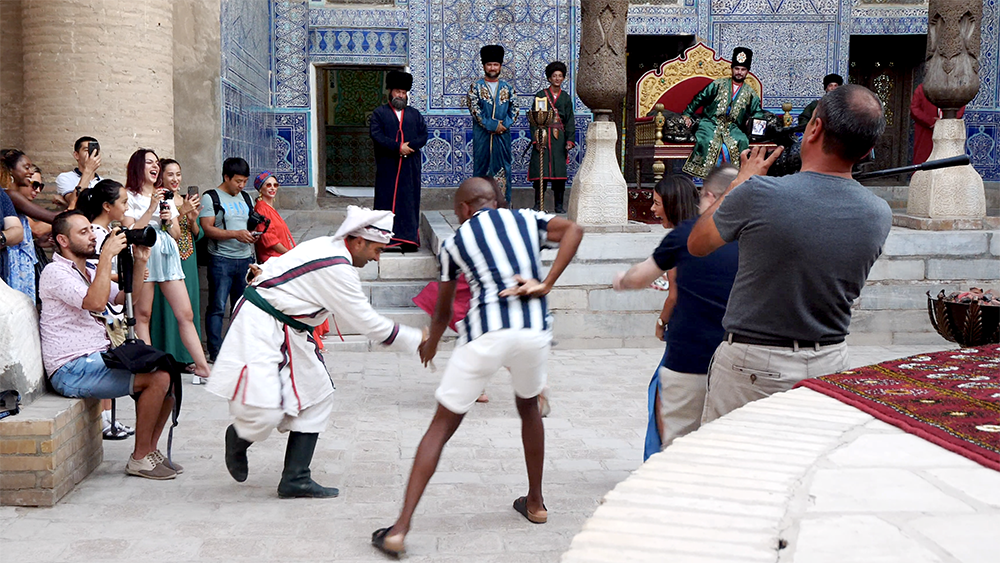 I’m all about culture and history when I travel, so spending time in Khiva, especially at night, was like a dream. It really was like something straight out of Aladdin.

But it was nearing dinnertime and I was hungry, so I couldn’t wait to get something to eat! 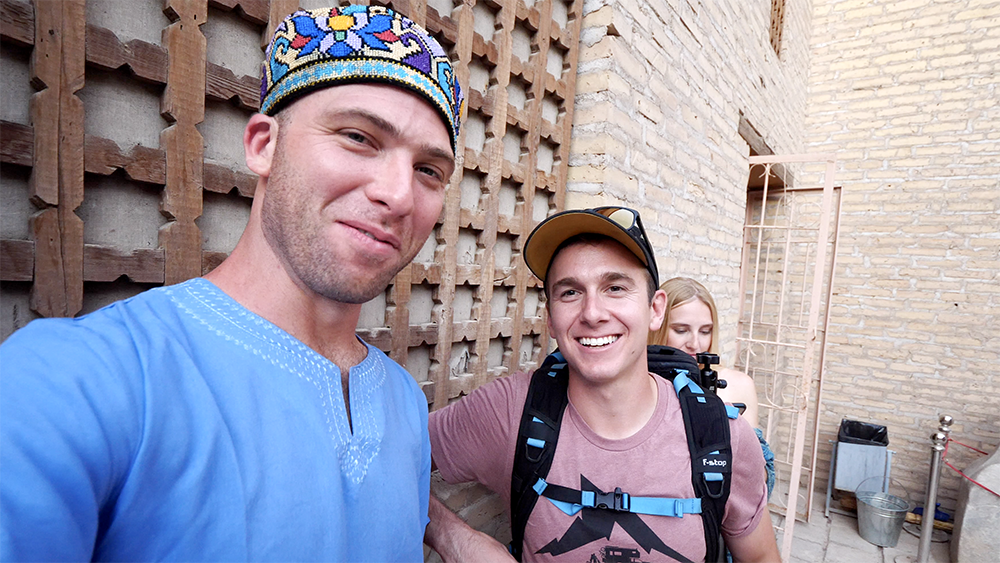 We ate at Khiva Karakul inside the walled city, in the shadow of one of the minarets, as musicians played. We were going to have some Khiva style Uzbek plov, but I started with something that might have been stuffed zucchini, as well as an Uzbek tomato, which explodes in your mouth the moment you bite down! 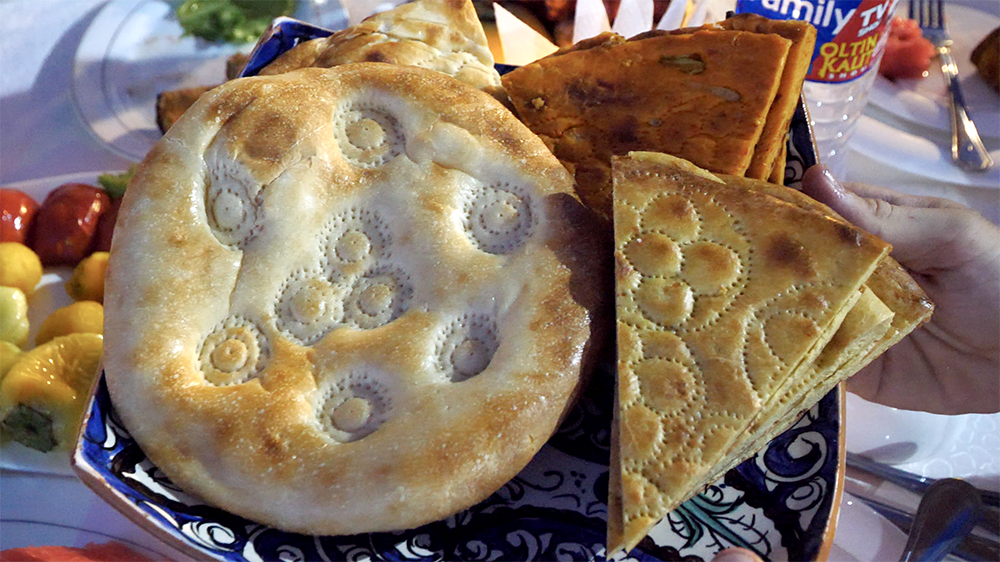 Then I tried an omelet-like fried item that contained eggs and vegetables and some wine! As we ate, dancers put on a traditional performance around us. Then I took a big bite of a big, juicy pepper. My new friend Sadaf got up and danced while a woman sang in Uzbek! 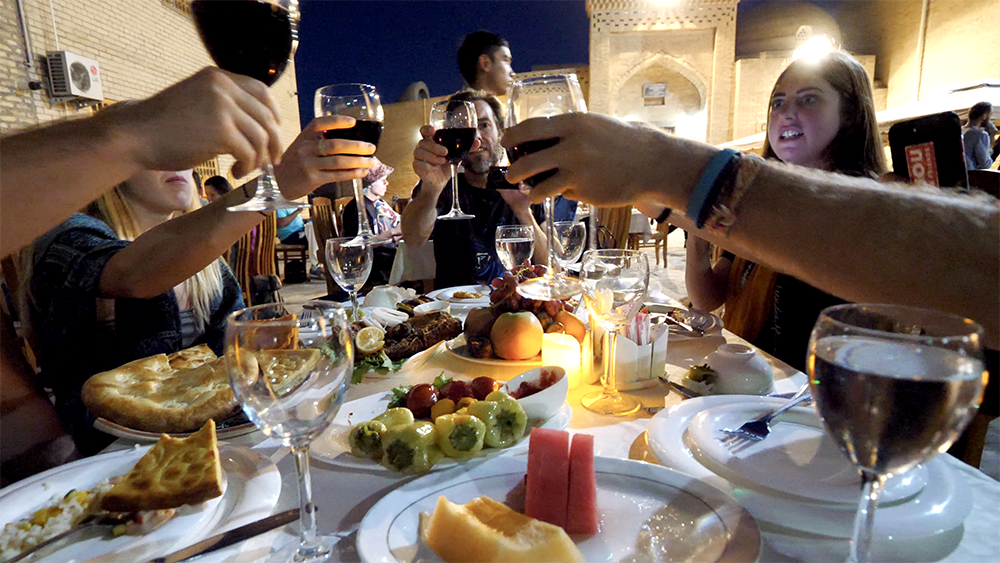 Then, I tried an empanada-like dish that’s stuffed with potato. I followed that with a grain soup with yellow carrots, beans, and beef. It was super flavorful and tasty! 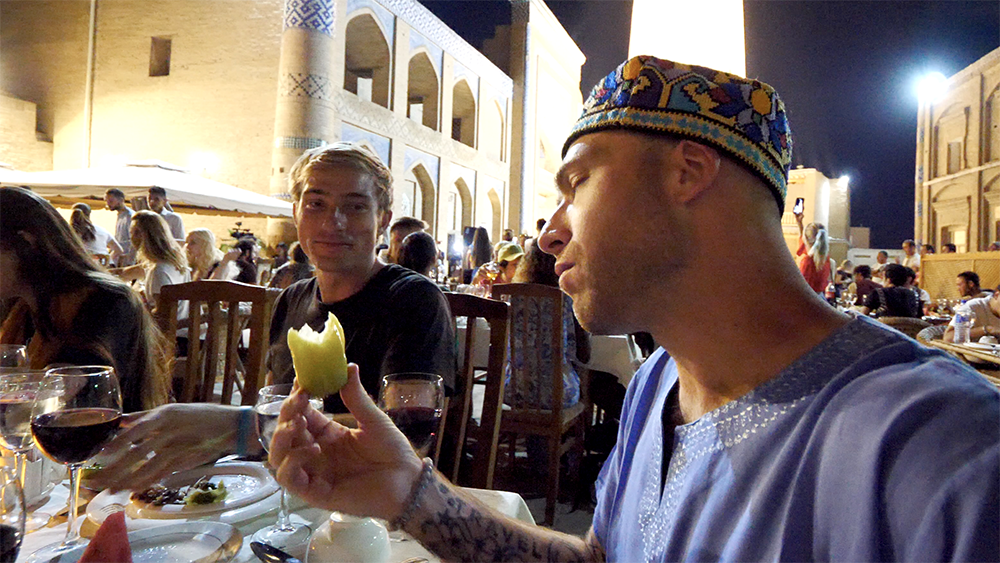 The wine continued to flow as we continued our amazing Uzbek dinner in the middle of Khiva’s walled city. Then, we had the king of Uzbek dishes, the plov. This Khiva style Uzbek plov contained rice, beef, lamb, raisins, yellow carrots, and more. 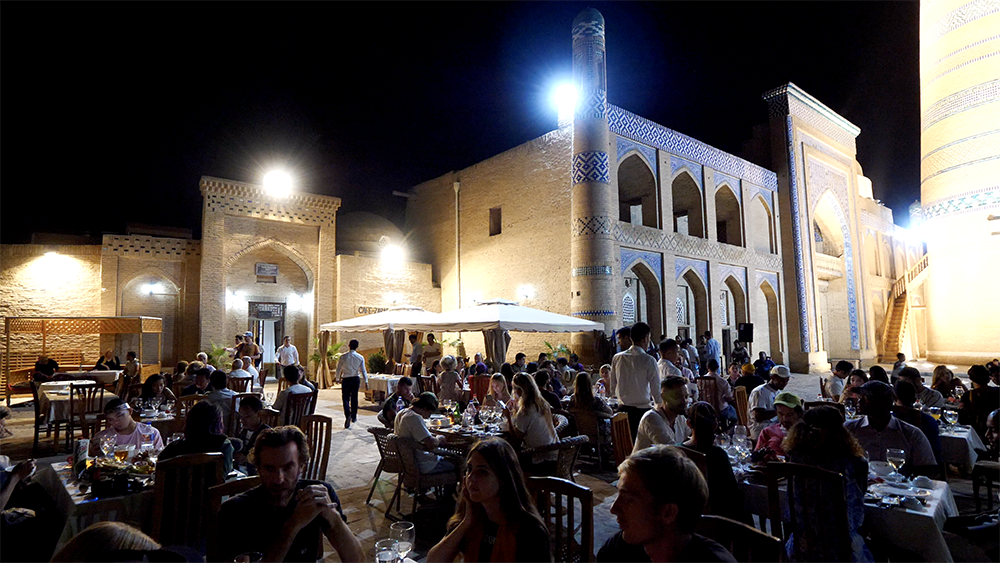 The lamb was super juicy. I loved the oil in the rice, as well as the addition of the raisins, which gave the dish a nice, fruity flavor. The beef was also amazing!

Plov varies from region to region, so this Khiva style Uzbek plov was different from the one I’d had in Tashkent earlier in my trip. It was still really delicious and fresh. 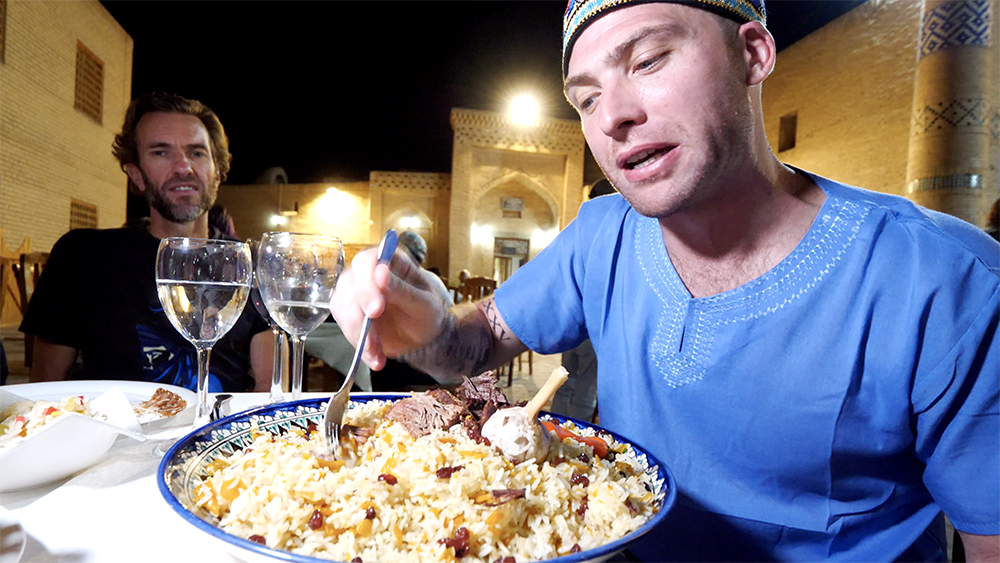 After dinner, everyone got together and enjoyed some hookah! I said goodnight to everyone and headed back to my hotel. We only had about six hours until we had to be back up! What an epic night in Khiva! 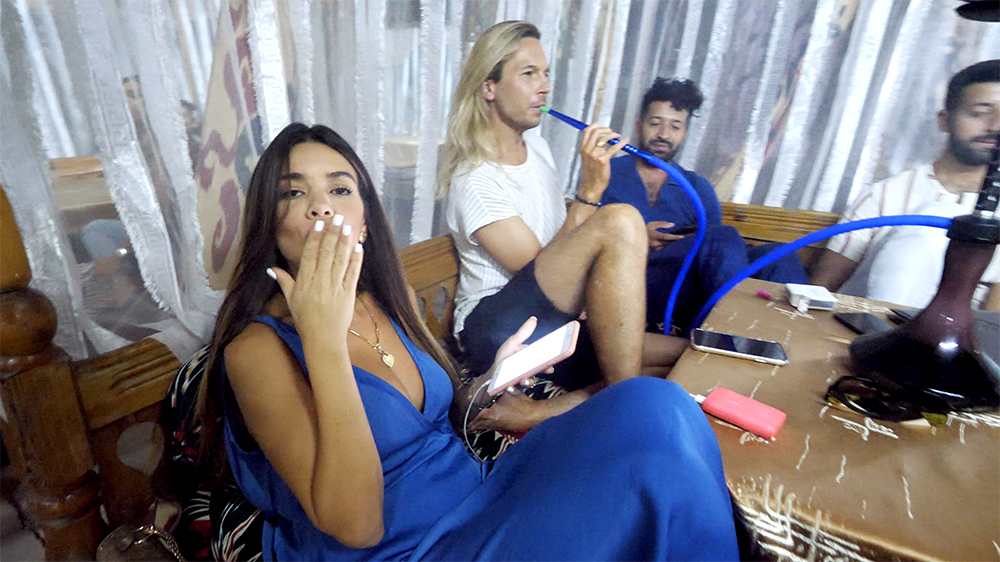 I hope you enjoyed this video. If you did, please give it a thumbs up and leave a comment. Also, please subscribe to my YouTube channel so you don’t miss any of my upcoming travel/food adventures!