With another day in the beautiful city of Bukhara ahead of me, I headed back out to explore this incredible UNESCO World Heritage City in Uzbekistan. Come along with me as I go on a tour of the local handicraft workshops and eat some incredible Uzbekistan food! 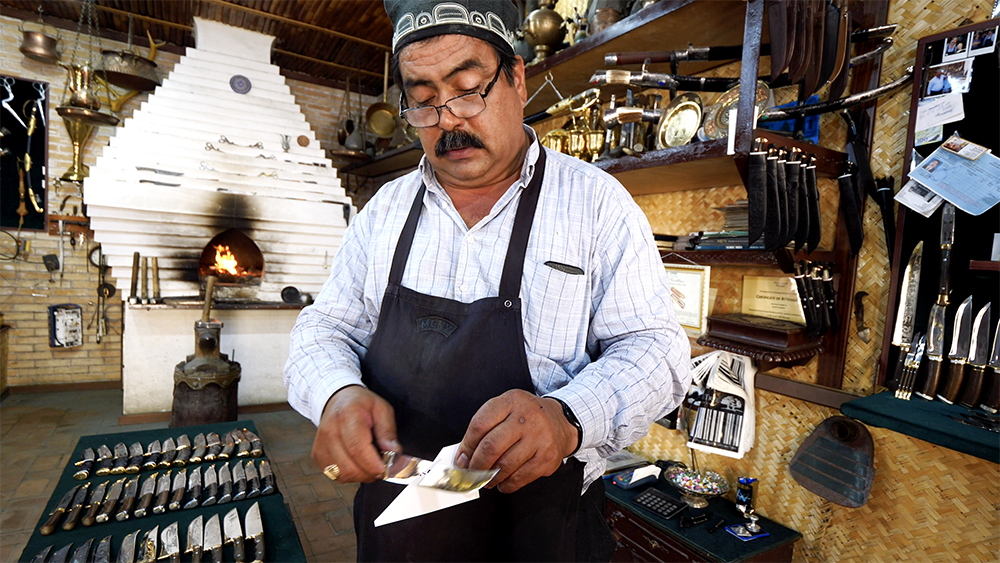 Bukhara is known for its long tradition of handicrafts. They’re famous for their craftsmanship and I couldn’t wait to explore. They make everything from knives to scissors to silk. There are workshops and bazaars throughout the city! 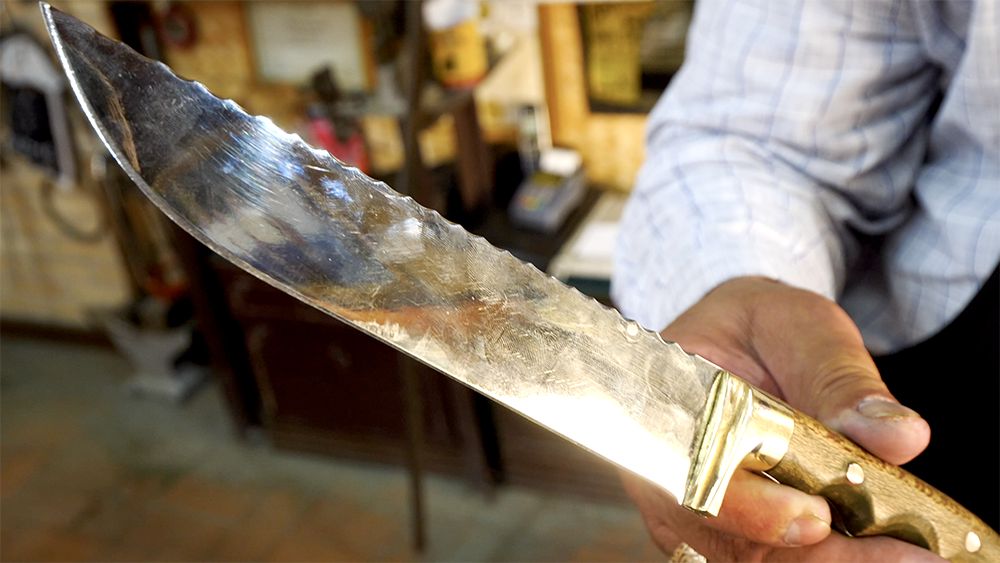 The first craftsman workshop I visited was run by a man who makes knives and scissors. He makes them into different shapes. I couldn’t help but admire the scissors shaped like a bird, which is the symbol of Bukhara. I bought a pair for 10,000 som, or roughly $10 USD, for my mother-in-law. The craftsman even engraved her name on them!

Back outside, I came across a woman selling potato fritters for 2,000 som/$0.25 USD each. The fritter was oily and had a fluffy dough. I thought it would taste better with honey or cheese inside, but it was still really nice! 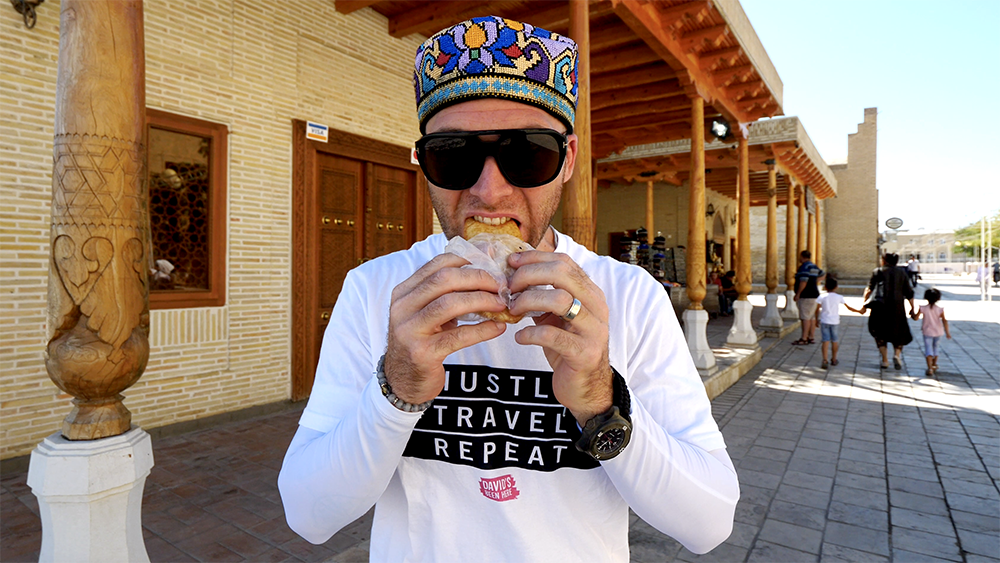 The city was really quiet, as there were locals around and the only tourists were my group. But I was also hungry and needed something to eat to carry me over until lunch. Then, I came across a vendor selling some traditional hats for 40,000 som/roughly $4.21 each. I bought two and haggled him down to 70,000 som/$7.35 for both. They were all made by hand! 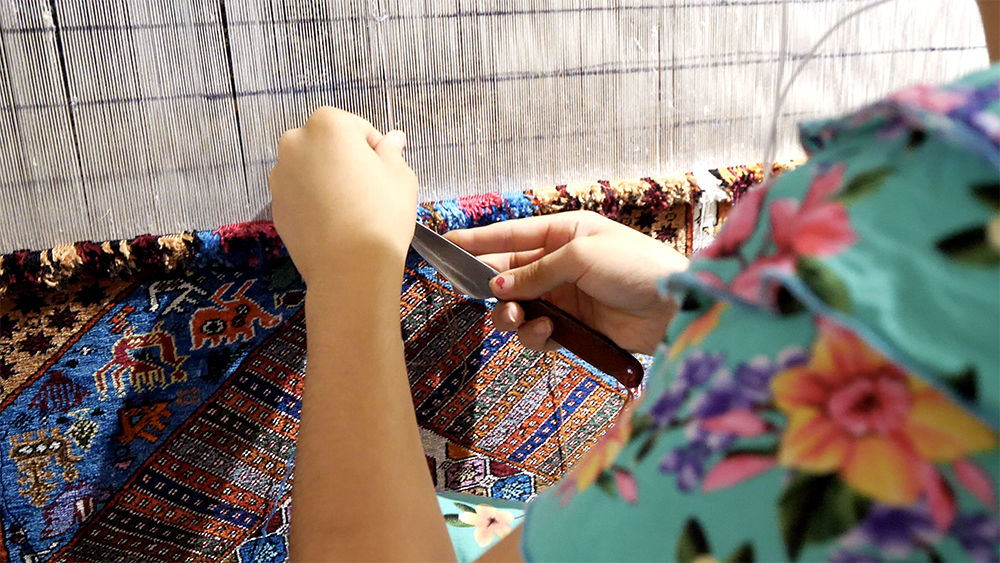 Across from the vendor was a silk workshop called Bukhara Silk Carpets. They were all handmade. Inside were never-ending silk and wool carpets. The wool comes from sheep, camels, and goats. A woman who worked there, Sabina, told me that usually 40 girls work there, weaving the carpets. I got to watch some of the women work. The most expensive rug there costs $78,000 USD! The most affordable wool carpets start at $100 USD, while the silk starts at $500 USD. 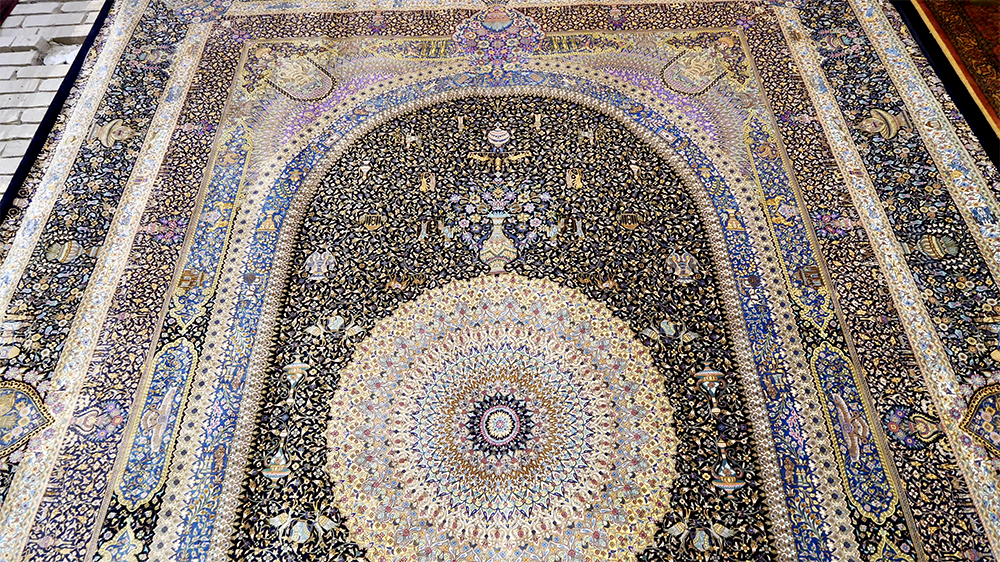 From there, I saw a vendor selling wooden animal figurines like elephants, turtles, camels, and owls. All of them were from India except the camels, which were made in Bukhara. I continued through the bazaar and saw more vendors selling jewelry, clothing, and hats. 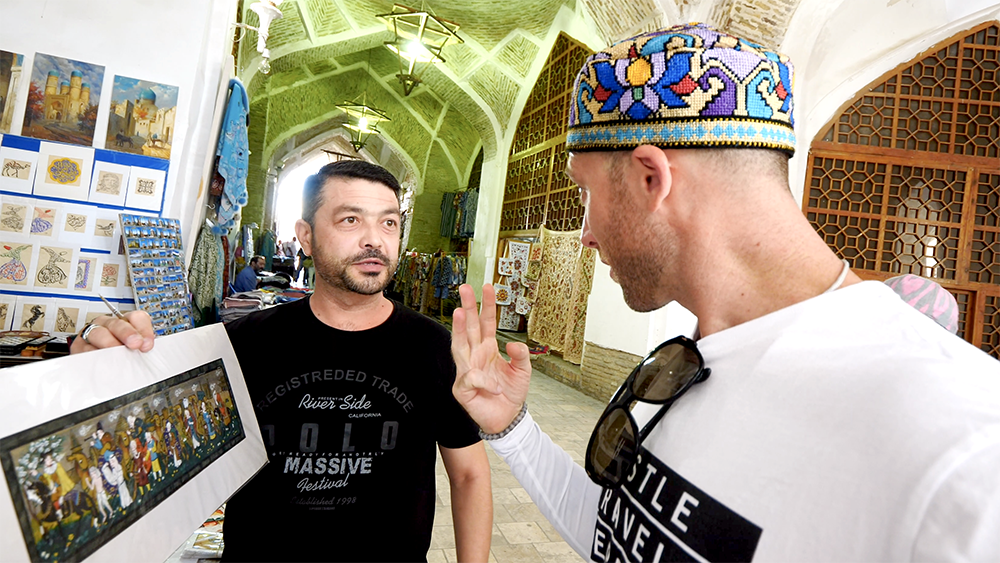 I found a guy selling beautiful paintings depicting the Silk Road. His artwork was amazing. In one of his pieces, he depicts Marco Polo, who slept in Bukhara for 3 nights in the 12th century.

Check out the Top 5 Things You Must Do in Khiva, Uzbekistan

I came across some ancient ruins and Magok-i-Attori Mosque, or the pit mosque. It was super hot outside, though – 95 degrees Fahrenheit! I was baking! If you come to Uzbekistan, don’t do it in August. It’s way too hot during that time of the year. 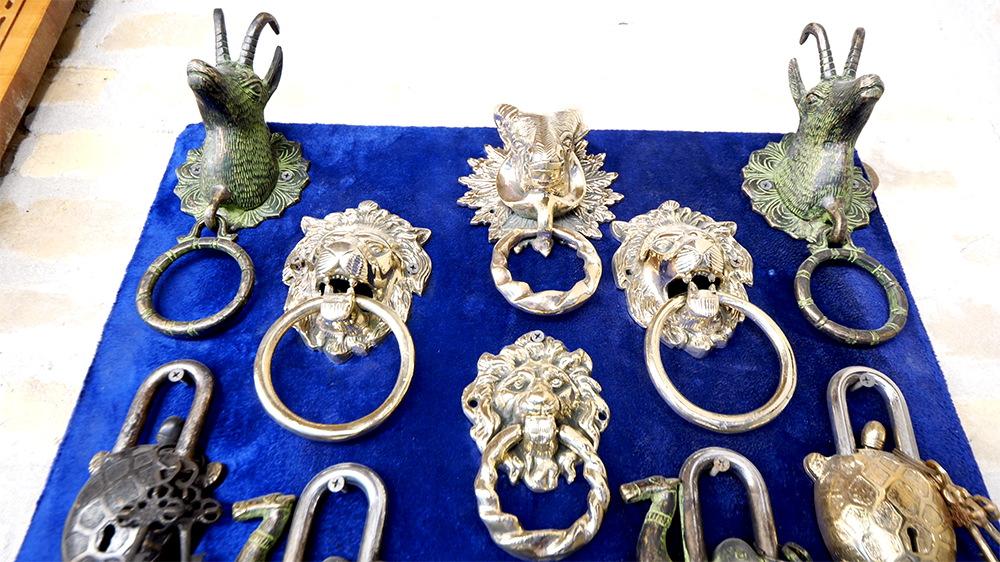 Across from the mosque is an amazing craftsman who sells amazing padlocks in the shapes of animals like camels, fish, and turtles. The turtle one cost 400,000 som/$41.99 USD. They were nice but I didn’t have any use for them. 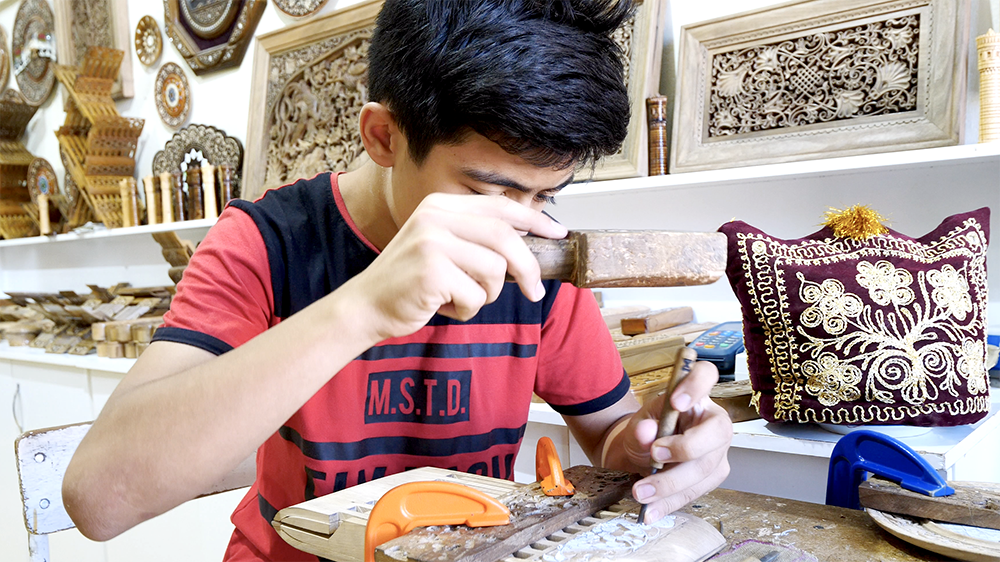 From there, I sent to a wood-carving workshop. I saw more book stands, tables, and more. One table was 6.5 million som, or about $600 USD. He also made seats, tables, plates, and an incredible chessboard! Everything was so unique! 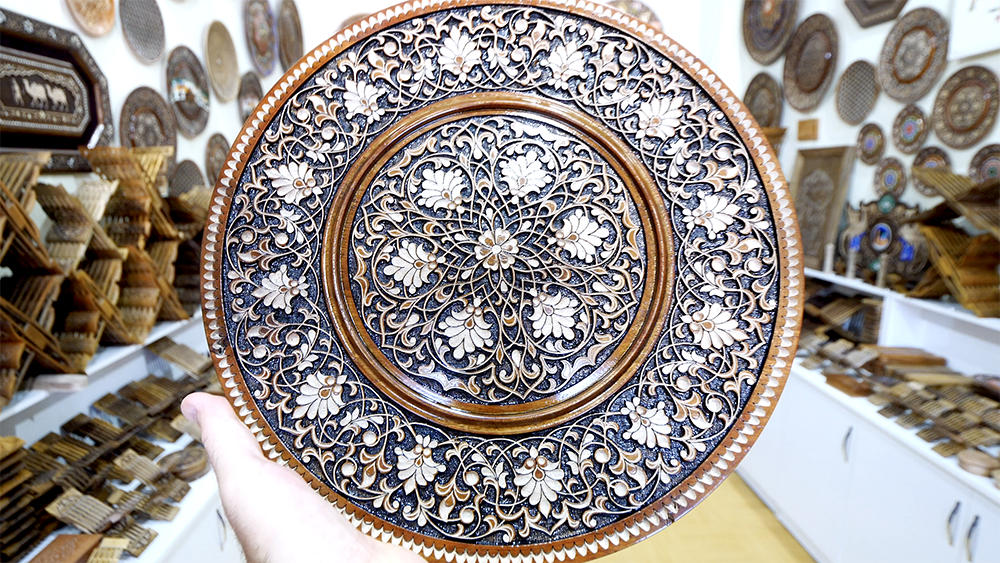 Further on was the Artisan Development Center, where they use red copper and yellow brass. You can buy the work there as well! There were nice bracelets there, and the nice guy there gave me a copper bracelet as a gift! 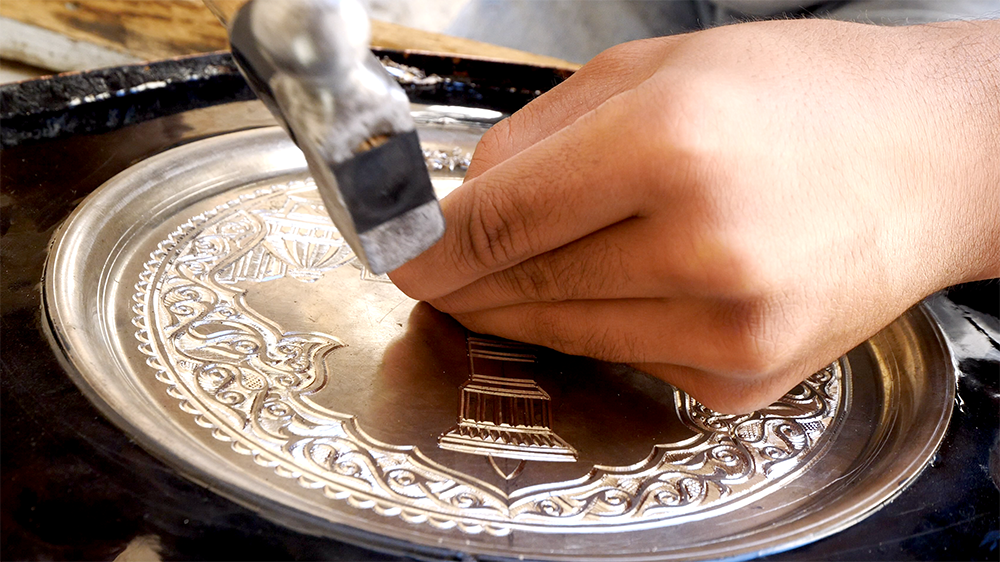 I also saw a woman making rings, earrings, and more bracelets. Then, it was time to eat some incredible Uzbekistan food at Old Bukhara Restaurant! 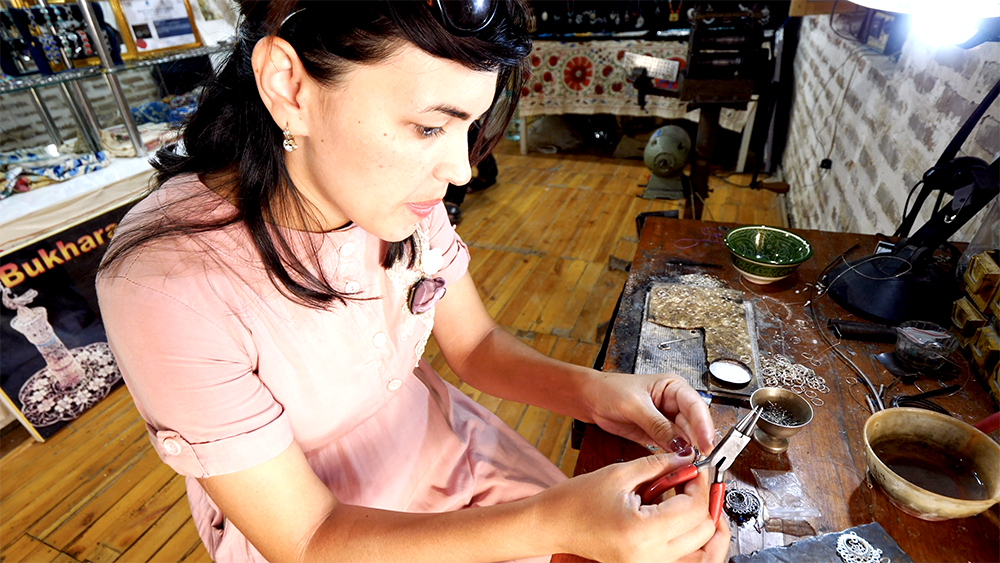 Next was a wine with a different taste. While musicians played, we continued dining on a bread with cheese inside and mastava, a beef soup with rice and vegetables. It had so many flavors! The rice had absorbed some of the broth. I added yogurt to it, which added a creamy taste and texture. 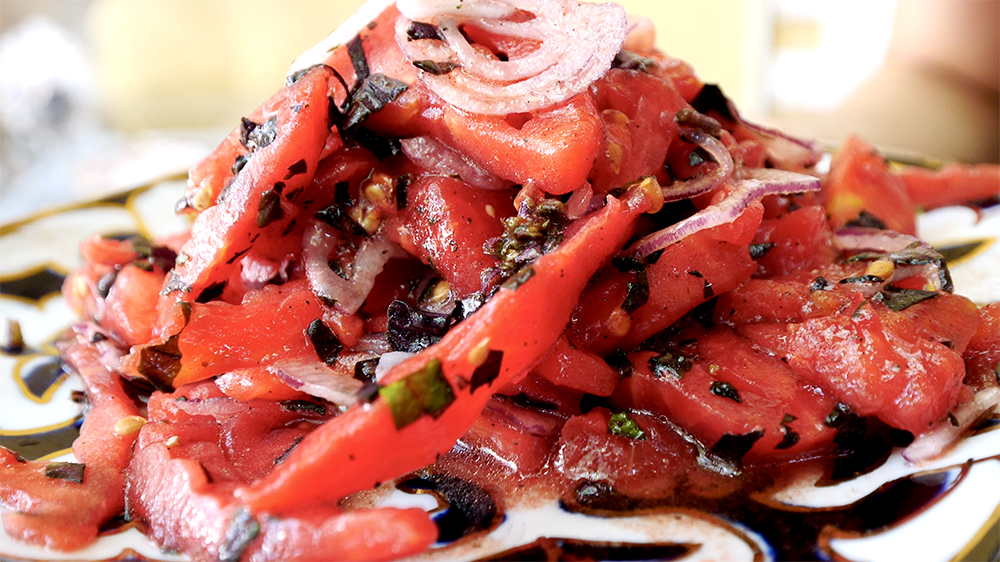 Next, I had lamb with potatoes and onion. It was so buttery and was the best lamb I’d had on the trip so far! The meat had obviously been cooking for a long time, because it was super tender and was practically falling apart on my fork. It was the most incredible Uzbekistan food so far! 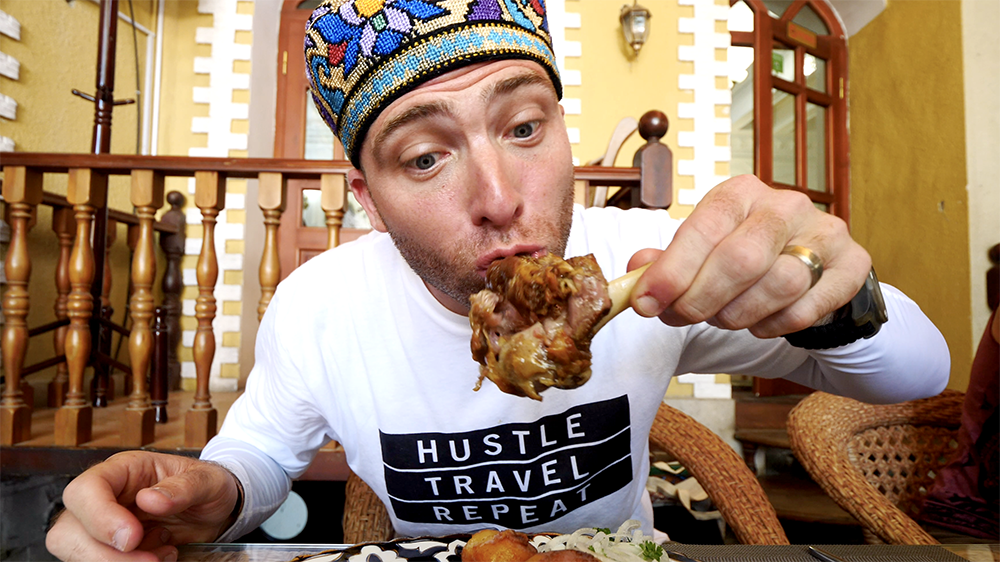 Dessert was a chocolate souffle with vanilla ice cream, which was like chocolate pudding with melted chocolate throughout! It was amazing! My friend Gabriel’s was way more liquid than mine, though! Wow! What a meal of incredible Uzbekistan food! 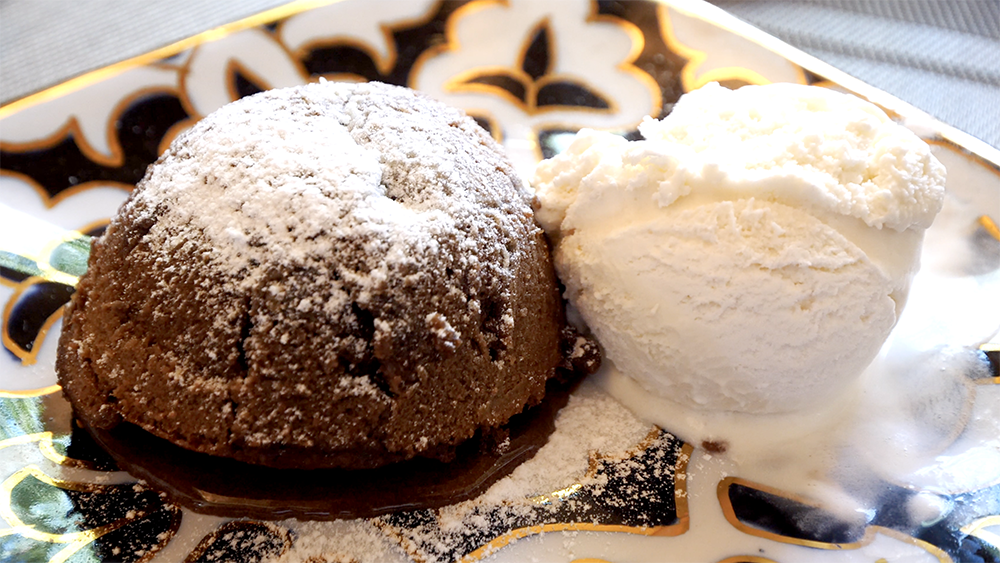 I hope you enjoyed exploring the handicraft workshops of Bukhara with me! If you did, please give this video a thumbs up and leave me a comment below. Also, please subscribe to my YouTube channel so you don’t miss any of my upcoming travel/food adventures!