As my adventures in the ancient city of Samarkand continued, I headed out to tour an incredible local farmers market and tried some amazing Uzbekistan kebabs! Come along with me as I continue exploring this beautiful Silk Road city! 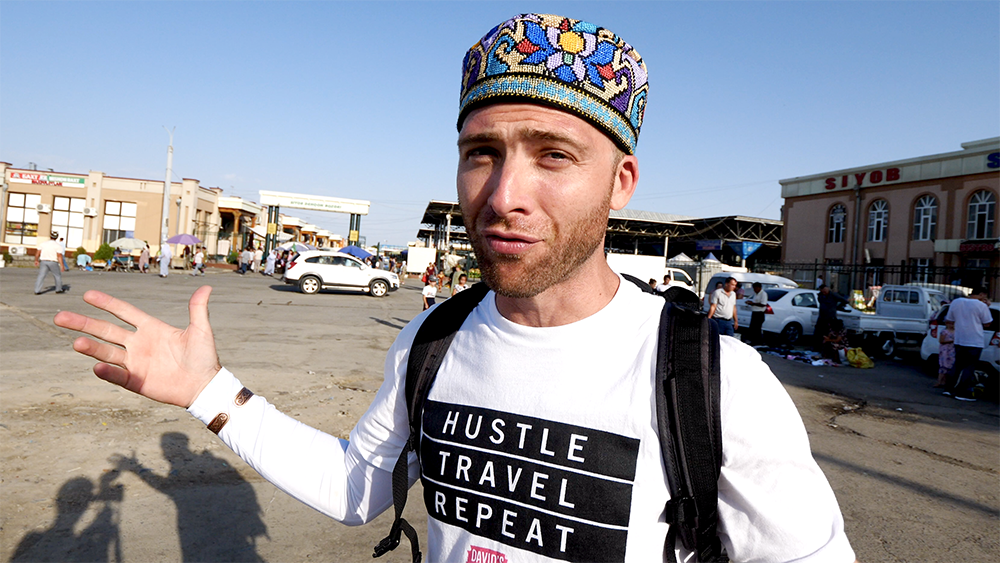 It may have been super hot and sunny outside, but it didn’t matter because I couldn’t wait to show you the local market, Siyob Bazaar. They sell lots of fresh local produce inside and I was so excited to explore it. Then I wanted to visit a mausoleum and have some kebabs for dinner, but first, let’s check out the farmer’s bazaar! 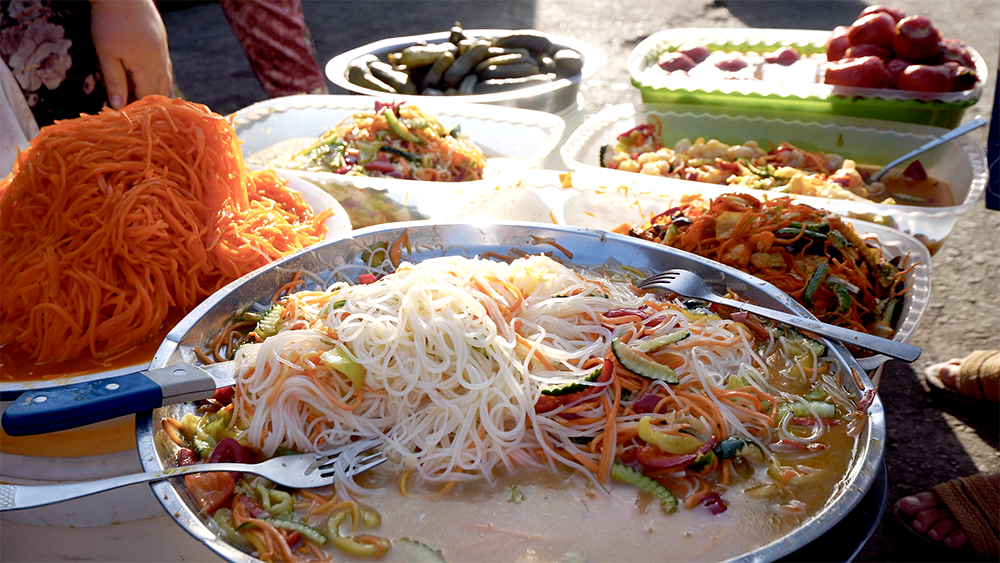 Inside, there were lots of huge watermelon, Samarkand bread (the most famous bread in Uzbekistan), and more! Some of the bread had black sesame in it! Then I came across some delicious-looking corn, lots of vegetable dishes, figs, and more.

I tried a fig. But I couldn’t eat the outside of this kind, so I just sucked the meat out of it. It was really good. I followed that with some delicious grapes, and another fig I could eat whole. I loved how fresh it was! 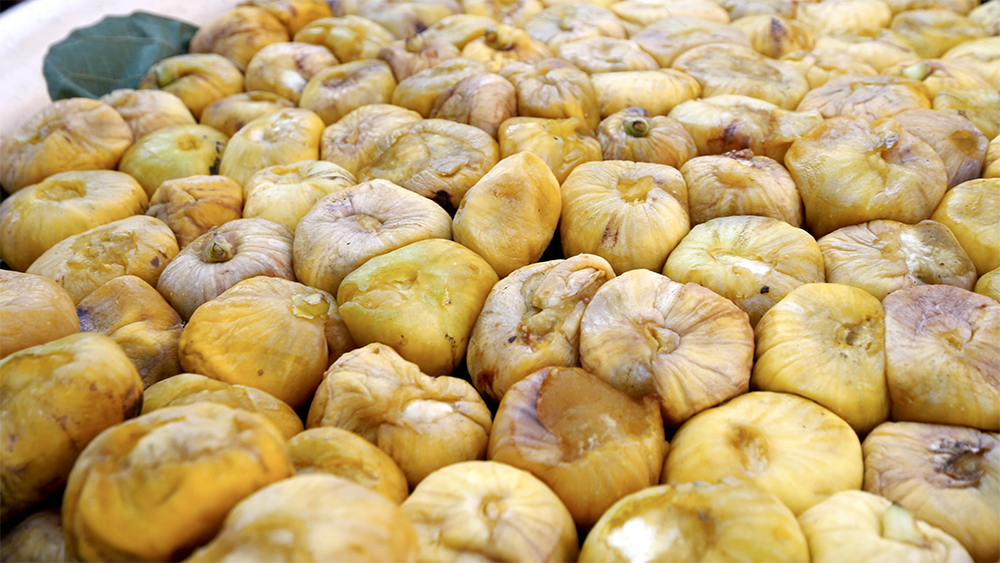 Next, I came across lots of plastic household items like buckets and containers. No one in the market wanted to be on-camera.. Then I found vendors selling newspapers, more grapes, peaches, raisins, and figs. This bazaar was never-ending! 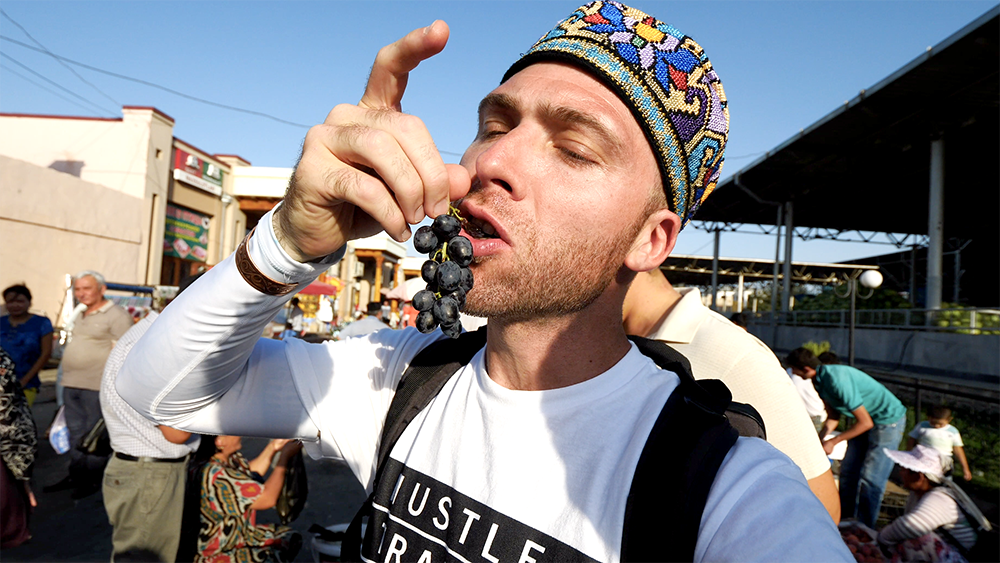 As I continued, I came across a vendor selling what had to have been hundreds of watermelons! I’d never seen a mountain of watermelon like it! 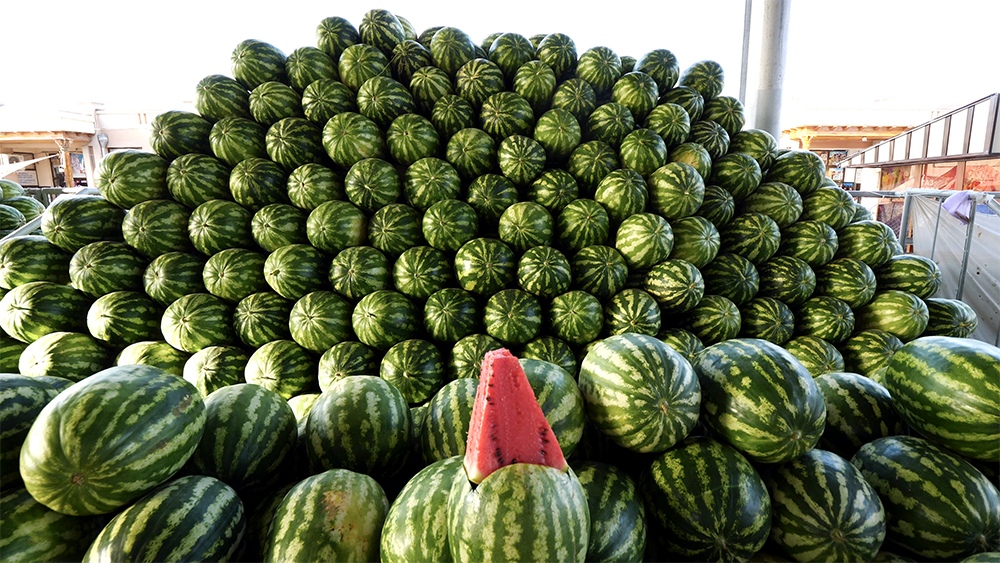 I continued through the labyrinthine bazaar toward the second level. On the way, I tried a super sweet blackberry and some fresh blackberry juice. It was so sweet and pure! It cost 10 som, or about $1 USD. 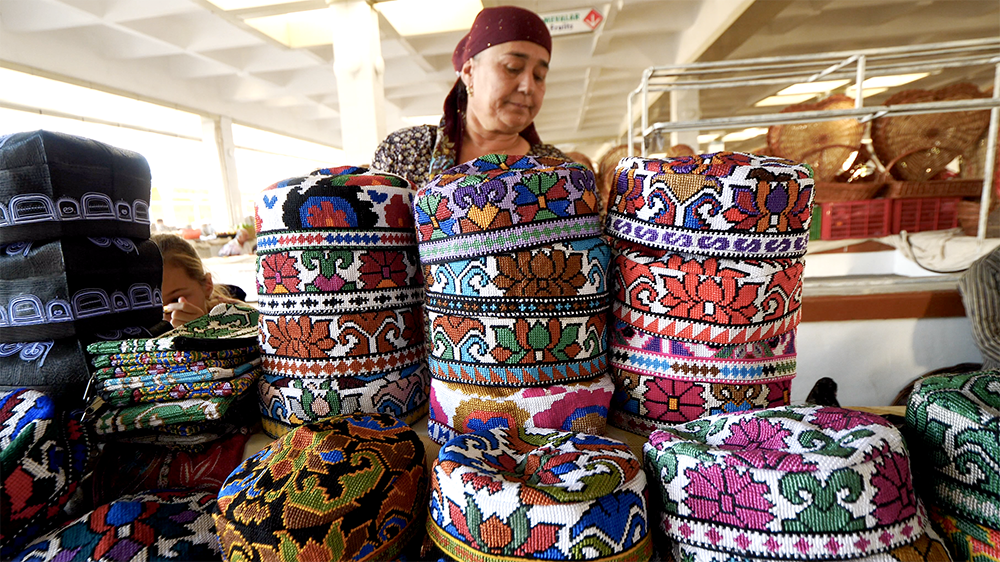 I came across a woman selling some beautiful hand-knitted hats. I had been wearing one for about 3 or 4 days and bought one from her for 50,000 som, or about $5 USD. It makes a great souvenir! It was a little tight, but it was very nice! 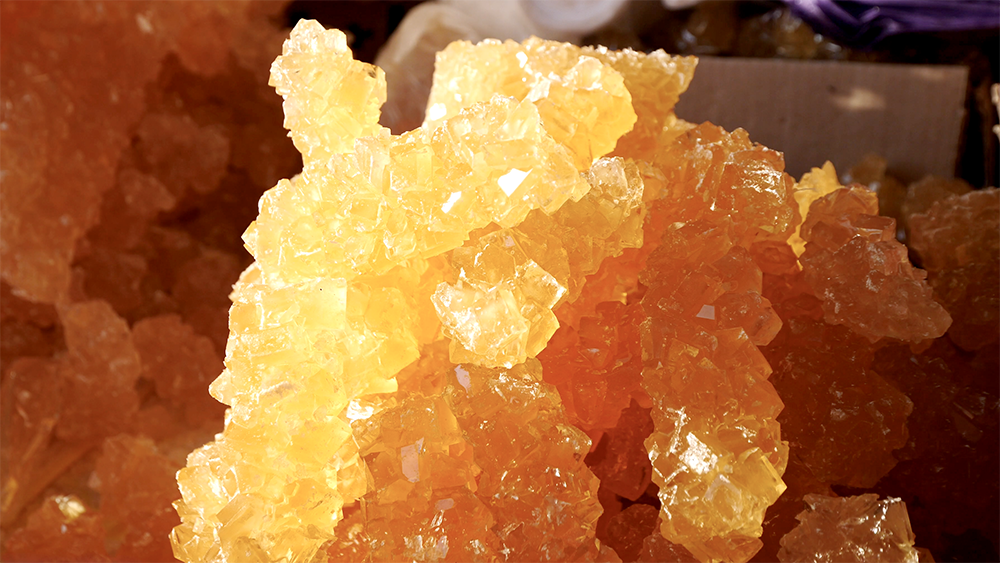 From there, my guide and I headed over to the sweets. I could see some sugary candy like rock candy, as well as a big, round sweet in the shape of bread. Then, I tried some nutty, dense yogurt that reminded me of Indian halwa. It was super sweet!

Next, I saw a type of sweet wedding bread that smelled amazing. I noticed that a lot of the Uzbek bazaars were very similar and sold a lot of similar things. But this bazaar didn’t sell any meat like others I had visited.

Next door to Siyob Bazaar is the Bibi-Khanym Mosque, which was built between 1399 and 1444. It was the biggest mosque in Central Asia at the time. Ninety-five elephants were used to built it! 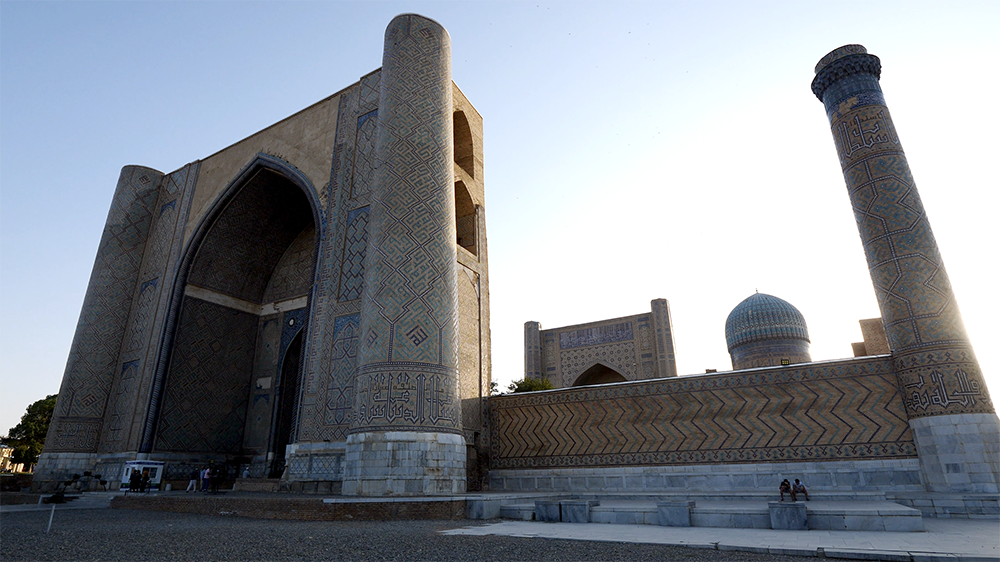 The mosque was absolutely enormous and contained a large courtyard! I hadn’t seen one that big in years. The gate was massive and the entire building was a true work of art. I thought it was even better than the one at Registan! It contains lots of blue and white. I liked the blue a lot! The craftsmanship to build it was incredible. And as is the case with all mosques, there is Arabic scripture on the walls. 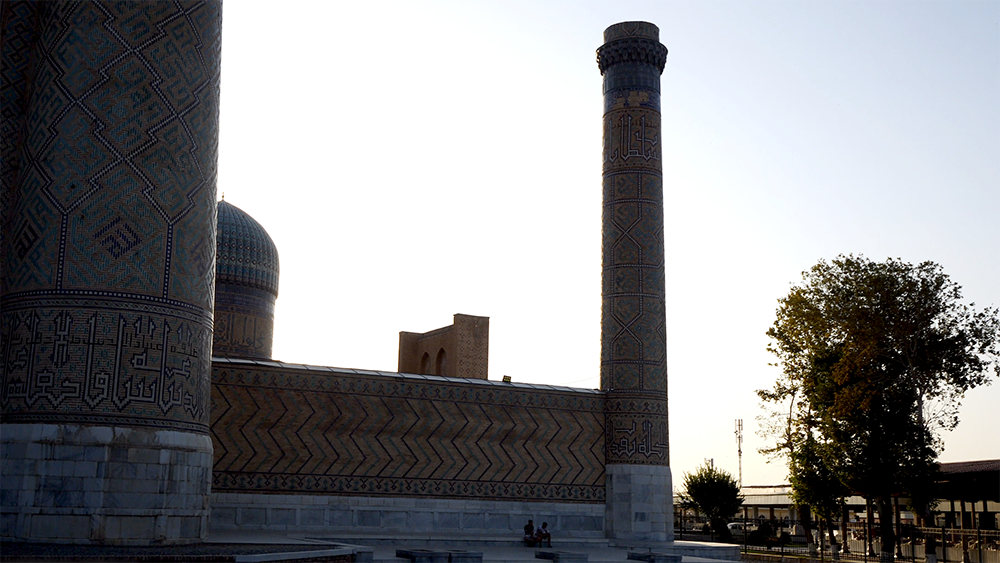 Through a wooden gate, I could also see the ruins of the old mosque. From there, my guide and I headed to a spot to see the sunset. We passed by the grave of Uzbekistan’s first president, Islam Karimov, on the way. It’s right across from the mosque and bazaar, but we couldn’t take photos of his marble grave. His tomb follows in the traditions of Uzbek architecture. 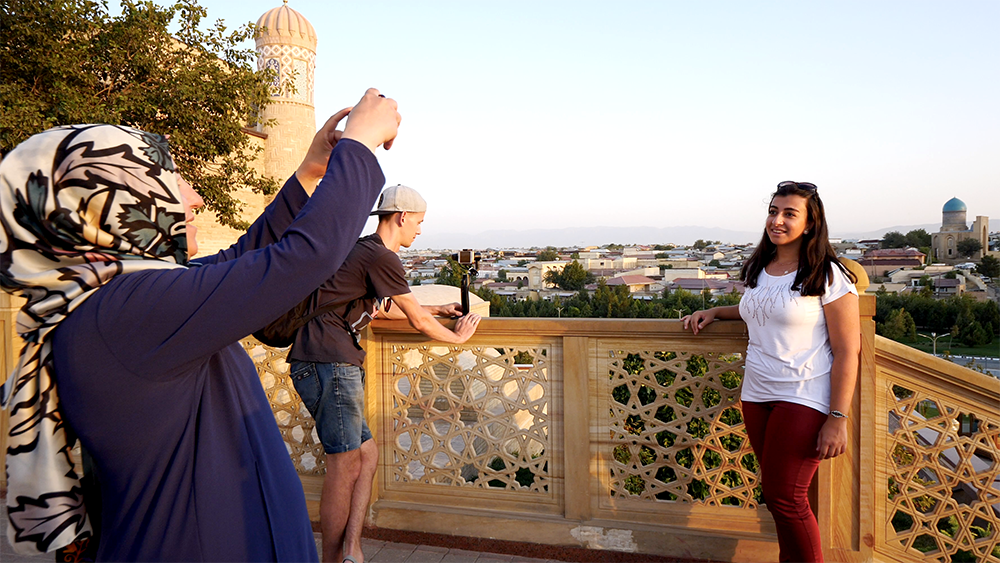 From our spot, we viewed the sunset and had an epic view of the city, bazaar, the mosque, and the mountains and neighborhoods. Next, we went to go eat at Samarkand’s most famous kebab restaurant, Ikrom Choyxonasi. 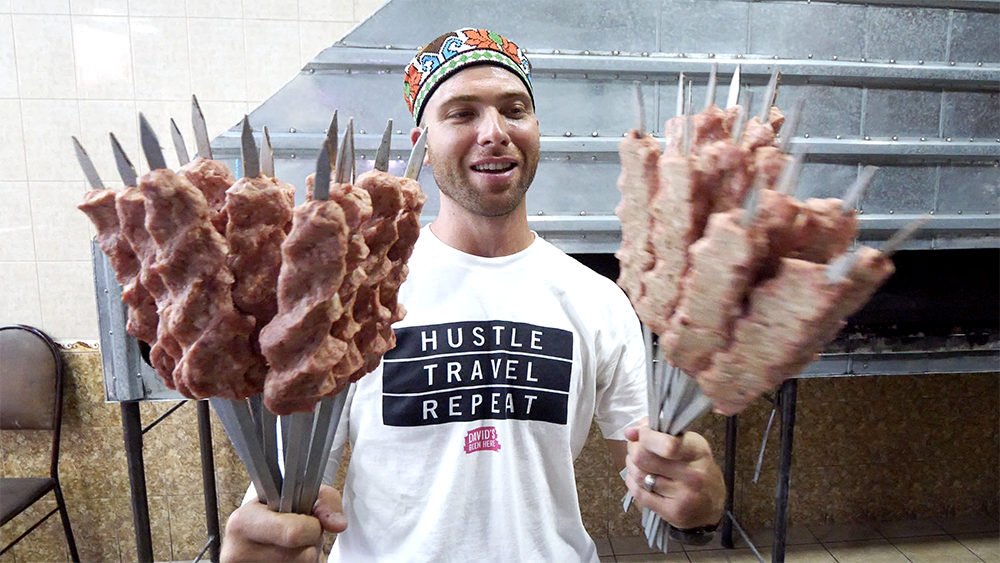 The kebabs looked incredible! It was kebab heaven! I immediately spotted a liver kebab and tons of other kinds as well. There were 22 different types in total! So, we decided to get a bunch of different types of amazing Uzbekistan kebabs. I was hungry!

I started with some smooth Uzbek vodka, followed by some salad with cucumber, onions, and tomatoes with mint. The tomatoes are out of this world! They’re so juicy and had a nice crunch. 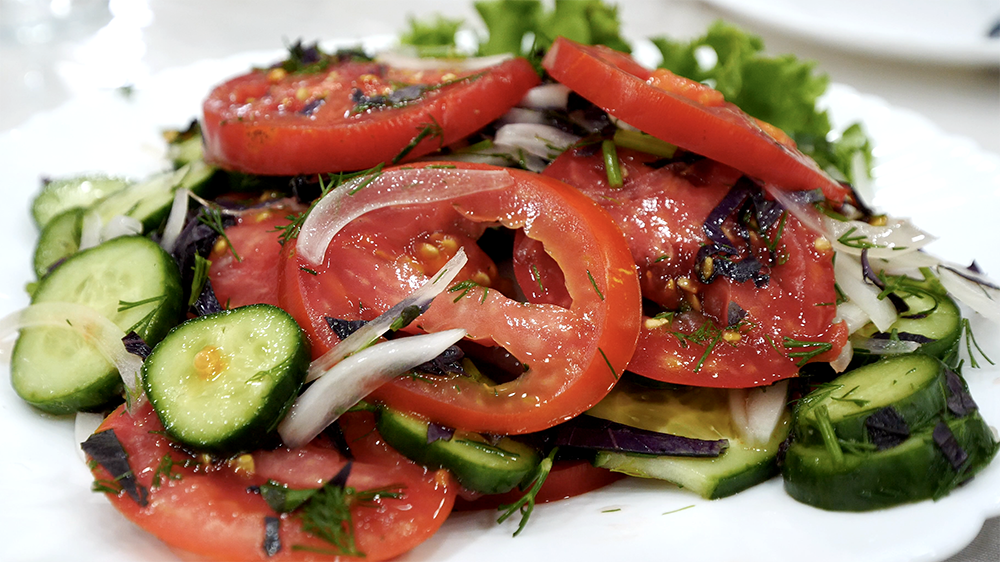 Next was fluffy, fresh Uzbek bread. I added some tomatoes to the bread, which made it almost like an Italian bruschetta! Then, our kebabs arrived! 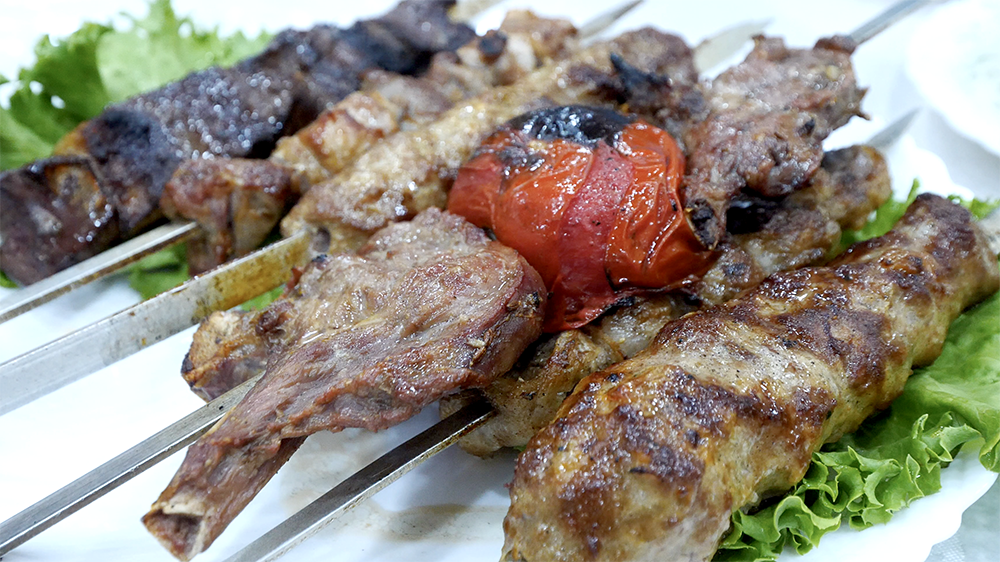 We ordered 5 amazing Uzbekistan kebabs: sheep, lamb, liver, beef, and chicken. I started with the liver, which was dense and so tasty and fatty! It was some of the best liver of my life! Then I tried a flavorful lamb chop and tried it with the refreshing, crunchy onions. Next was the beef, which had a nice layer of fat around it. It was outstanding and so fresh! 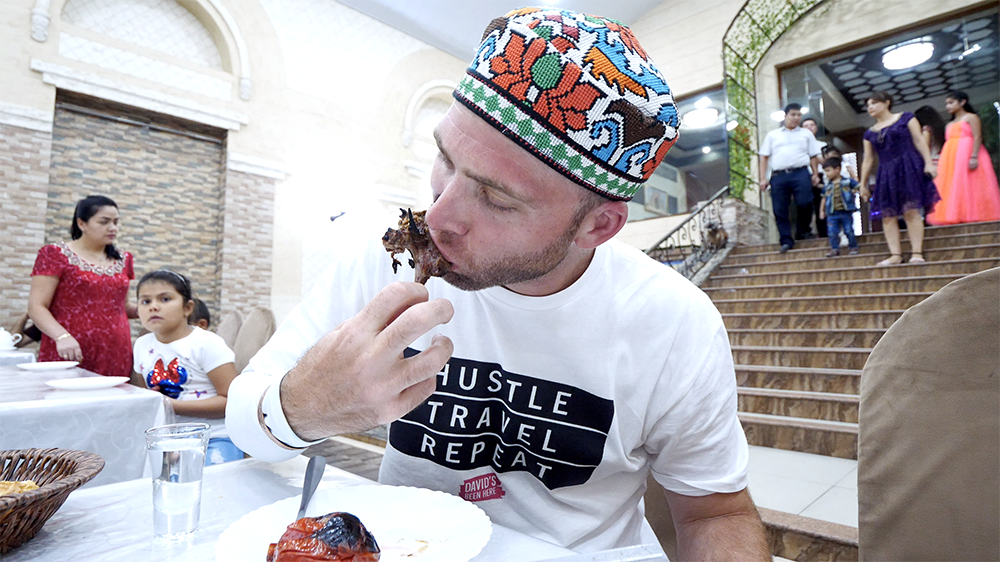 Then, we had more lamb! But this one was just lamb on the skewer instead of a lamb chop. The last kebab was beef and bread on a skewer, and it looked heavenly. This kebab had just the right amount of spices. It was amazing with the onions and was full of phenomenal flavor! 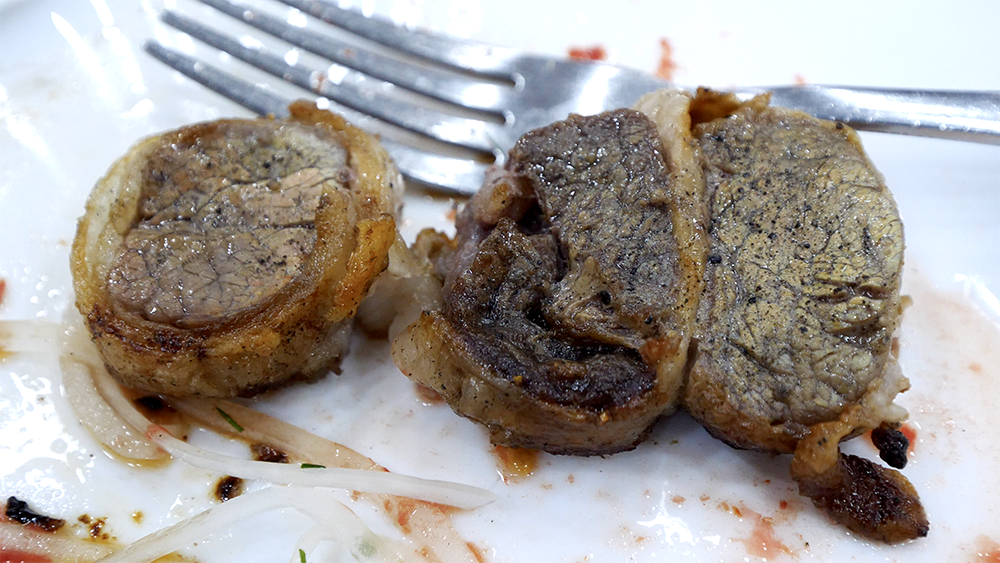 I hope you enjoyed exploring the farmers market and having amazing Uzbekistan kebabs with me! If you did, please give this video a thumbs up and leave a comment. Also, please subscribe to my YouTube channel so you don’t miss any of my upcoming travel/food adventures!