Even though my adventures with my fellow travel content creators of the World Influencers Congress were at an end, there were still a lot more places I wanted to explore in Uzbekistan. Come along with me as I visit an Uzbekistan roadside food market as I travel from Samarkand to Shahrisabz! 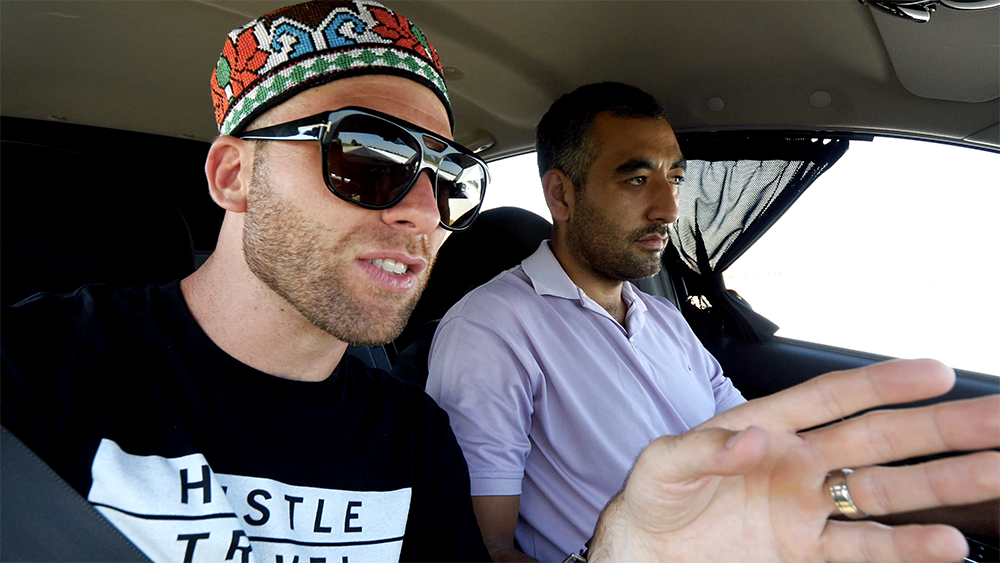 Shahrisabz is the hometown of Amir Timur, the founder of the Timurid Empire and the most famous king in Uzbekistan’s history. It’s a UNESCO World Heritage Site and is only about 90-100 minutes south of Samarkand!

As soon as we exited Samarkand, the landscapes became a mix of desert and farmland. It was really hot outside and I could see mountains in the distance. There were some homes and gas stations, but for the most part, it was straight agriculture. They grow a lot of figs and tomatoes in Uzbekistan, so I thought some might be grown in this area. 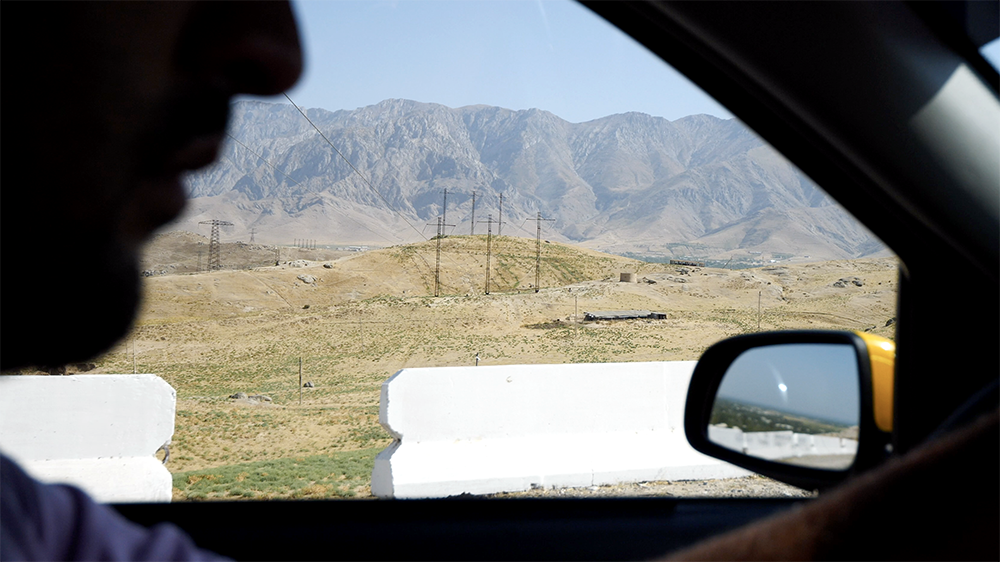 To get to Shahrisabz, we had to cross the mountains in the distance. The mountain area felt like an oasis, with a lot of trees and a small lake. The road zig-zagged through the landscape as the terrain became more mountainous. We passed a vineyard on the way, as well as some tiny mud huts. It reminded me of my time in Lesotho. It was a whole different world from Samarkand! 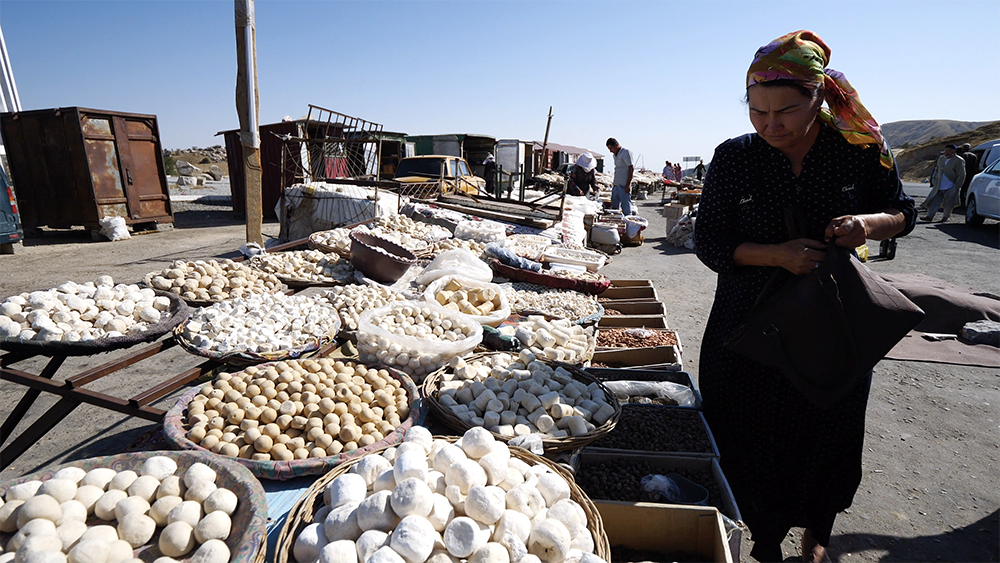 We found an Uzbekistan roadside food market and stopped there. There, they sold fruits, peanuts, and spices! I tried a rock-hard treat, and a milky yogurt ball. We also got epic views of the surrounding area! 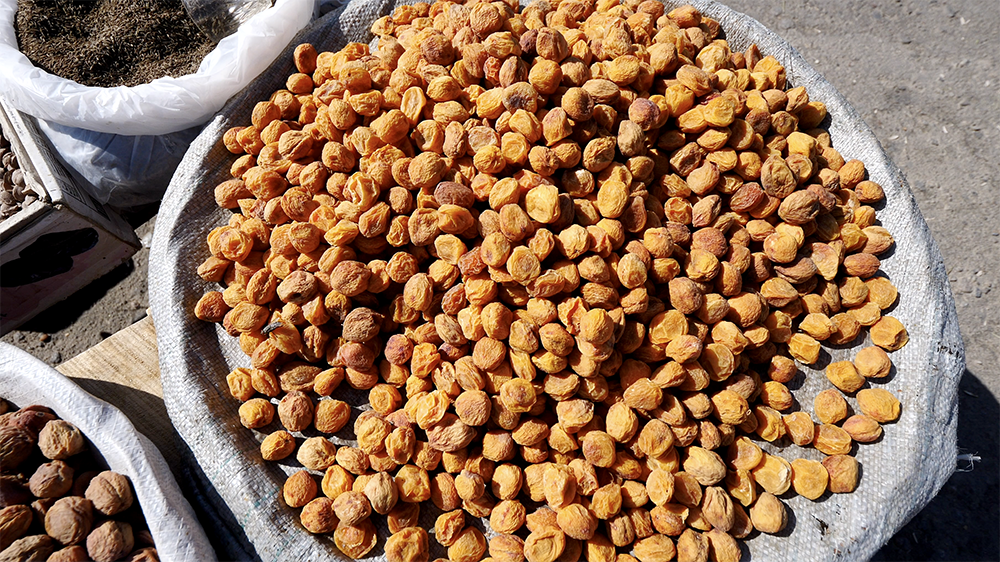 I also tried a dried fig. It was a little too dry for me; I prefer figs to be moist and juicy. Most of the items sold at the market were dense milk balls that have a chalky taste. I didn’t really like them, but my driver told me they’re usually eaten with beer! They also had apples, which are so good in Uzbekistan!

Check out my VIDEO: Traditional Uzbek Food + Tour of the Holiest City in Uzbekistan | Bukhara, Uzbekistan 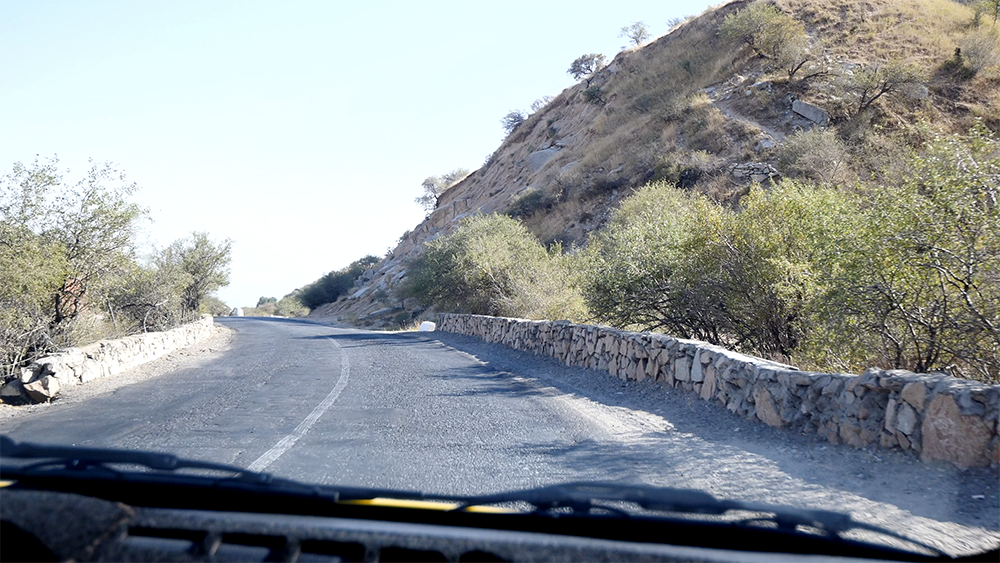 Back on the road, I was loving this road trip. I love road trips because they give you an authentic look at the country you’re traveling through. I saw horses, people butchering a pig, kids playing outside, a van full of melons, and more! Local vendors load up their vans with fruit to transport them. 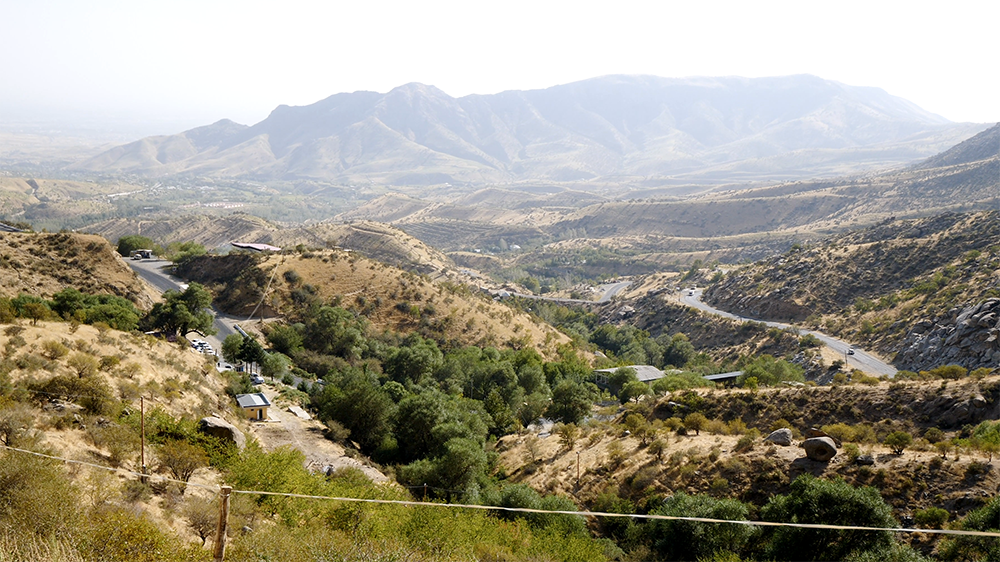 The landscape was also beautiful. The mountains were yellowish and had lots of rocks and boulders. As we descended the backside of the mountain, we stopped at a lookout point to get breathtaking views of a valley. I could see how they cut the road and streets through the area. Shahrisabz was only 15 minutes away! 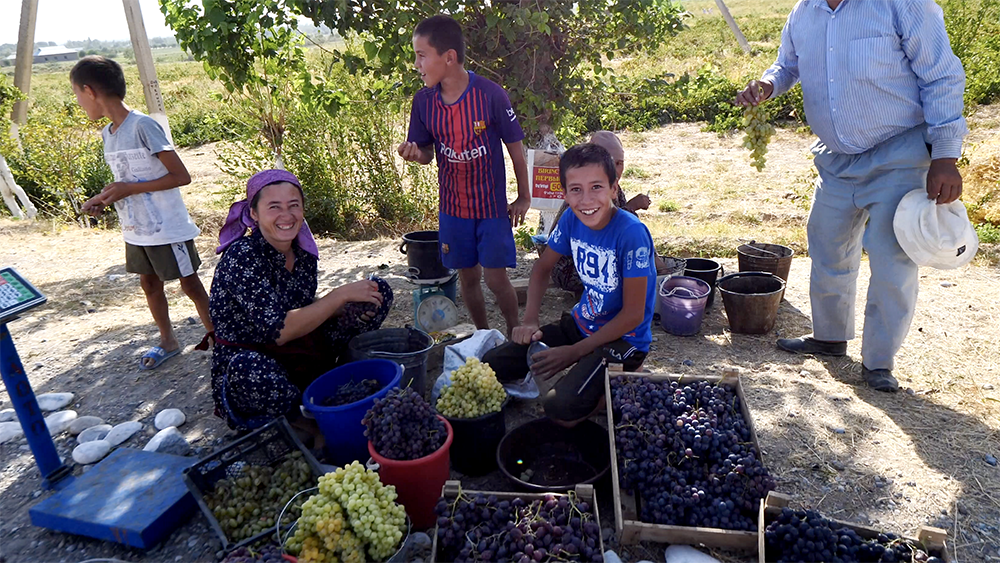 The valley was green and had lots of houses and people selling items. I was amazed by how different this side of the mountain looked. There was so much lush greenery! 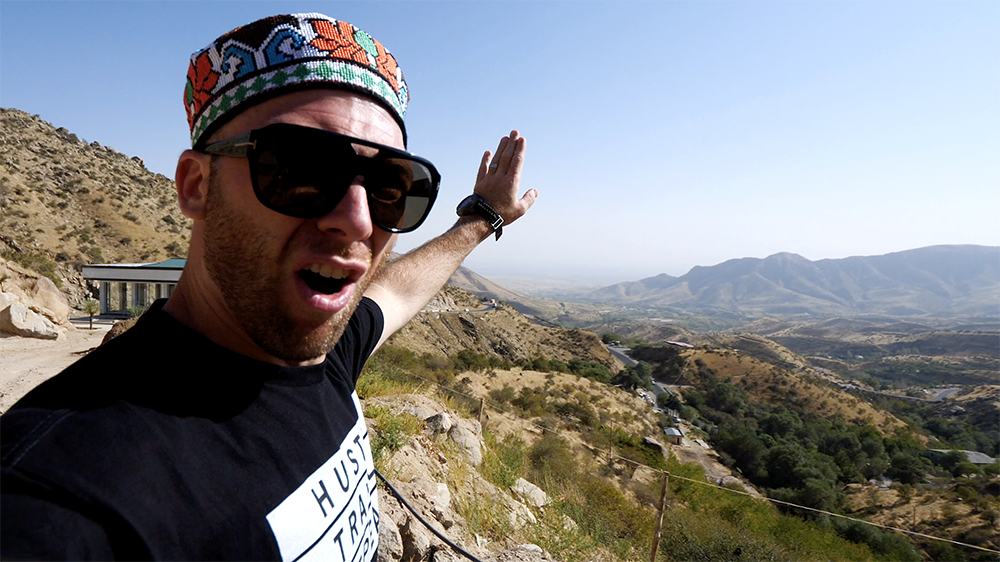 We stopped again when we spotted some roadside vendors selling green and red grapes. They were juicy and delicious! One kilo cost 5,000 som, or only $0.52 USD. It was a great deal for such juicy grapes. They had a lot of seeds, though! The vendors were so friendly. My driver bought about 15 bunches of grapes!

Uzbekistan produces lots of wine, and this was the wine-producing region. I love Uzbek wine even though it’s not a country most people think of when they think about wine. 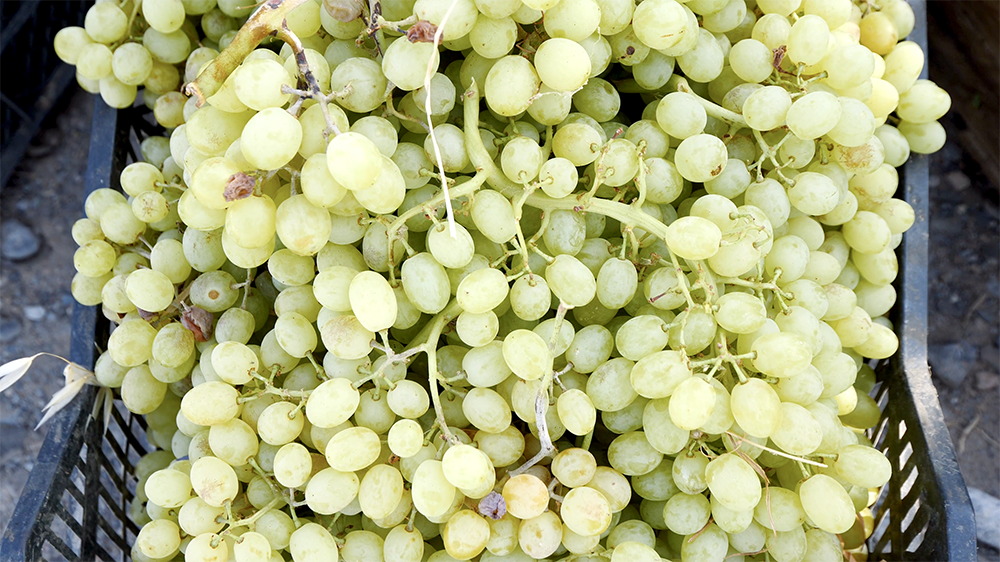 We entered Shahrisabz, which looked like a really small town. There are lots of historical sites there. I saw lots of tire shops and retail places and townhomes. Then, I met up with the town’s tourism board! 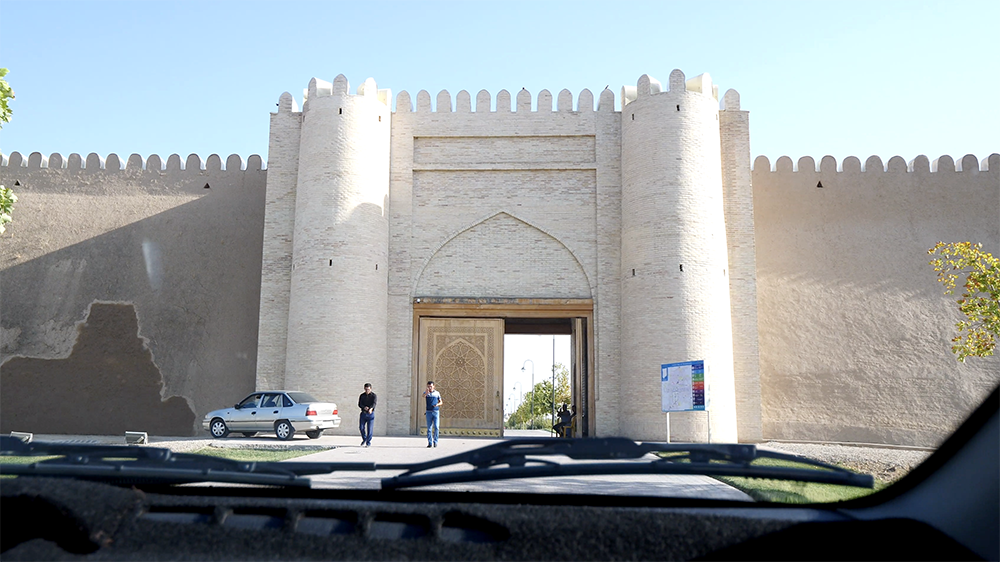 I hope you enjoyed checking out the Uzbekistan roadside food market on my way to Shahrisabz! If you did, please give this video a thumbs up and leave a comment below. Also, please subscribe to my YouTube channel and click the notification bell so you don’t miss any of my upcoming travel/food adventures!