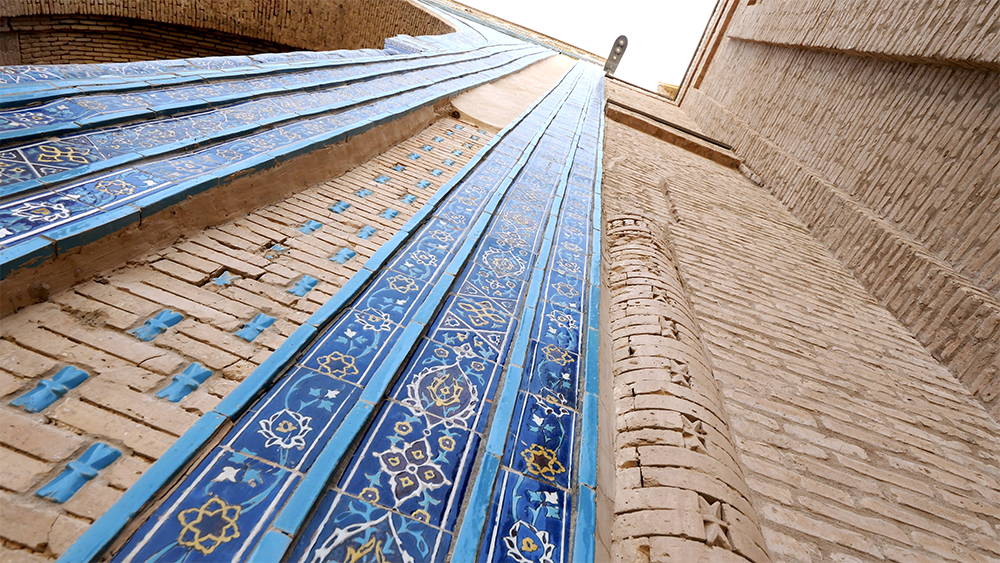 My afternoon started at one of the mausoleums of the Sultan Saodat Complex in Termez. This complex was built between the 11th and 17th centuries and is the resting place of members of the Sayyid Dynasty of Termez. The dynasty was made up of descendents of the prophet Muhammad. The complex also contains mosques and a khanaqa. Khanaqas are places of spiritual retreat for and is meant for Sufi brotherhood gatherings. 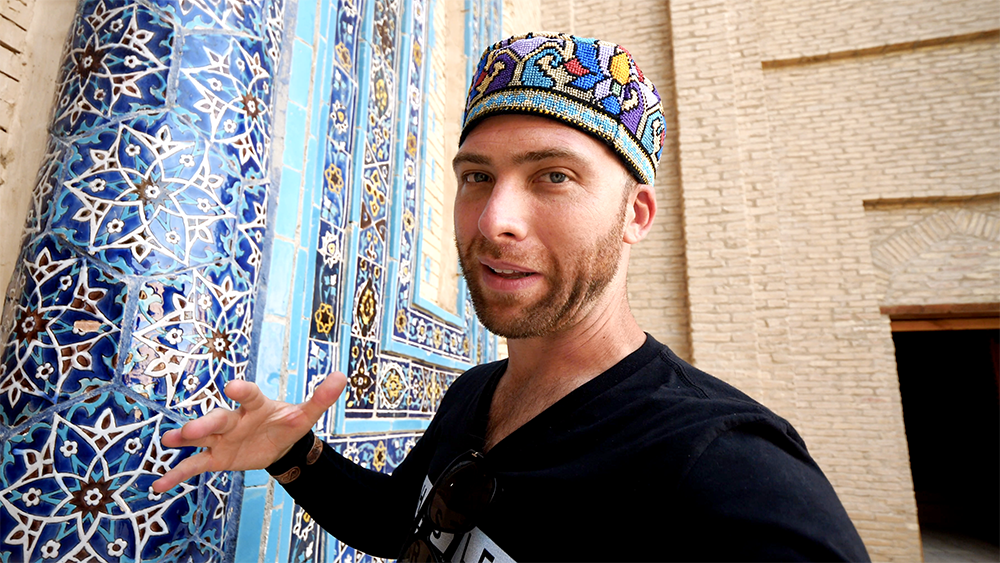 The mausoleum contained lots of beautiful brick work. It was truly amazing. This type of design can only be found here and at Jakurgan Minaret. There was also some stunning blue and aqua tilework around the archway. I loved the colors of the designs, which were white, aqua, and yellow. I was told Amir Timur loved that color and that it was also meant to represent the sky, which is why many mosques and mausoleums around the country have blue tiles.

Check out Top 10 Things to See and Do in Bukhara, Uzbekistan

Even though it was constructed during the Islamic Period, the architects included symbols from other religions, like Zoroastrianism and Buddhism. 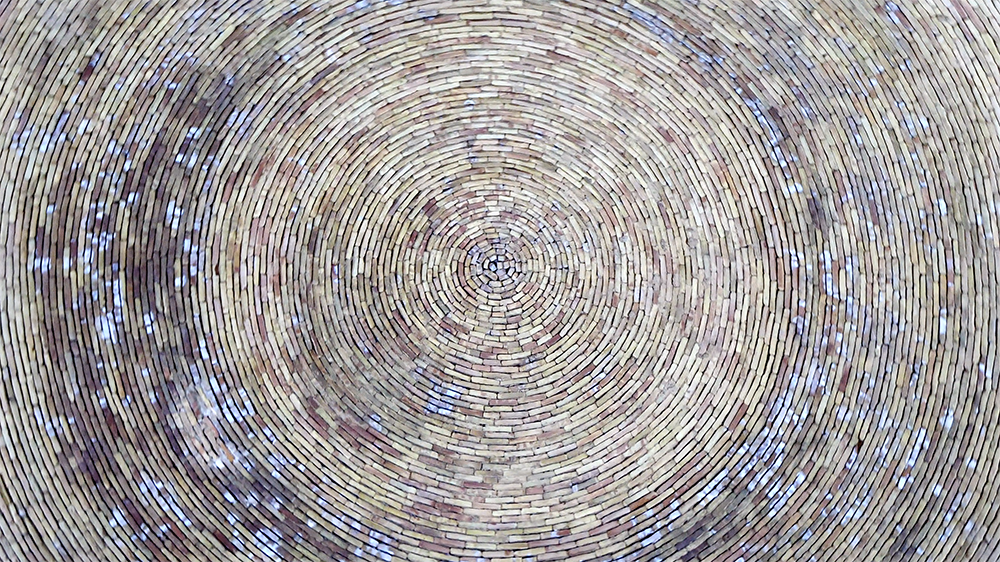 Inside the crypt, we saw the graves underneath the dome, which looks like a galaxy. This is one of the oldest parts of the complex. Even Genghis Khan didn’t destroy this place when he destroyed Termez because of the influential people who were buried there. This place is 800 years old and has stood the test of time. 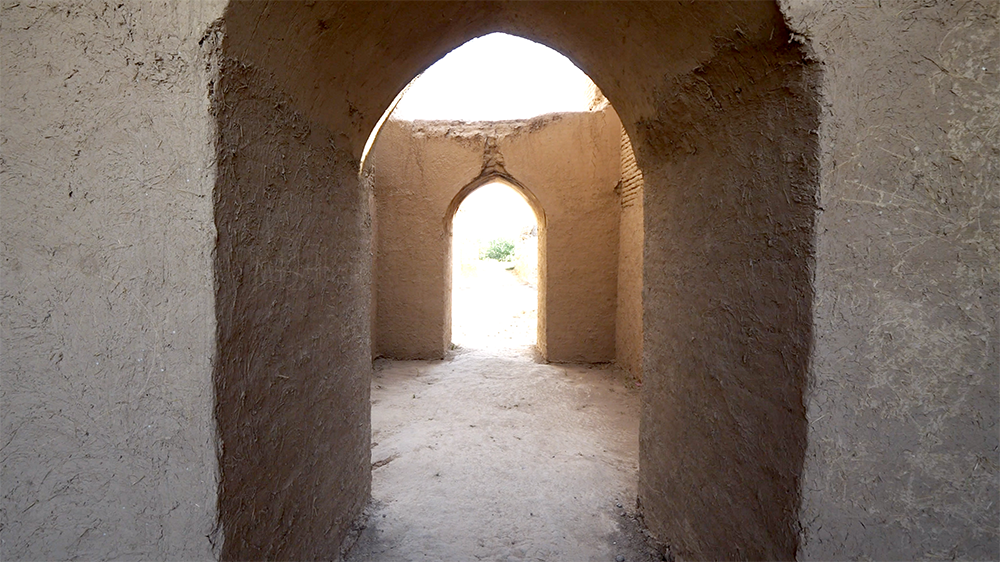 Next, we headed to Kirk Kiz, an 11th-century complex. Some believe it was a palace, while others say it was a fortress. There’s a local legend that 40 women, led by the princess Gulaim, lived there and fought off raiding nomads. This complex is further proof that Uzbekistan is a treasure trove for history and culture lovers. 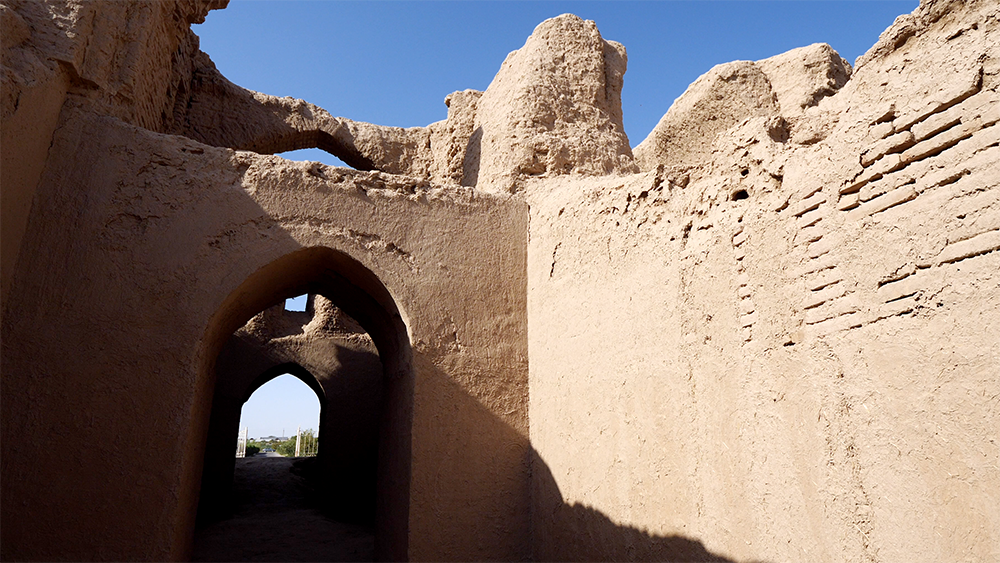 It looked like a fortress to me! It’s a square, walled complex that’s about 54 meters long on each side. Each corner was protected by a tower. Archaeologists have been excavating the site since 2016, but are still unsure of its function. 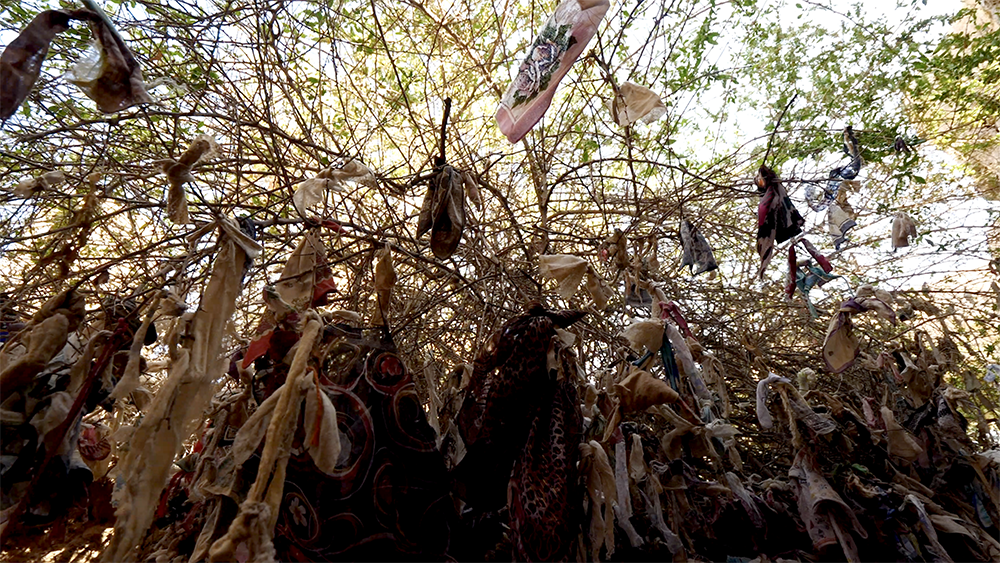 On the grounds is a wish tree, where women tie a piece of cloth like a scarf or tissue on its branches so God will grand their wishes. The residency has 15 rooms that have been discovered, as well as huge hallways. Most of the building is in ruins, though. It was so large and grand!

Check out 15 Things to See and Do in Samarkand, Uzbekistan

Next, it was time to start my Uzbekistan street food tour in Termez with some somsas! There’s a big variety in Termez, and each restaurant has its own kind. But first, we stopped to get some watermelon. They usually cost 12,000 som/$1.26 USD each, but we negotiated and got 2 for 20,000 som/$2.10 USD. 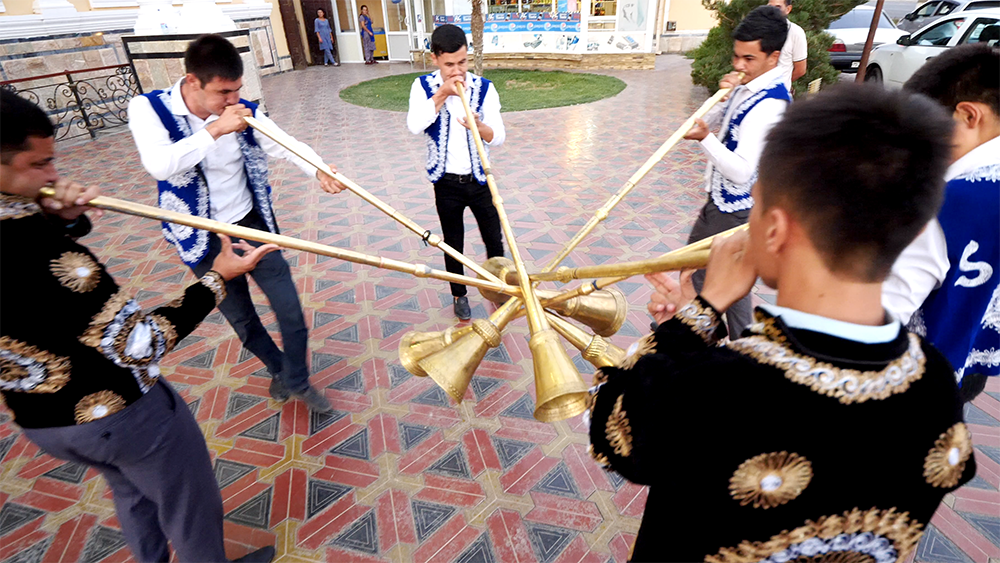 We came across musicians playing traditional long horns called karnay, which are also used in Iran and Tajikistan. They were playing in a wedding near my hotel! Then, we saw a statue of an Uzbek poet before going to get some somsas. 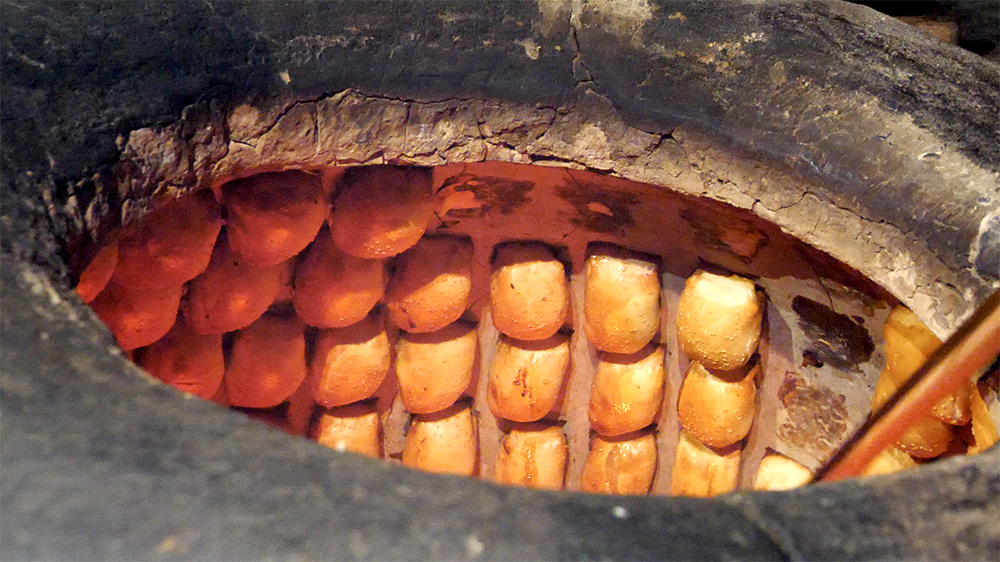 We started at Sina Restaurant where they had a tandoor full of somsas baking inside. The guys who run the restaurant are from the town of Sina, and they brought their local somsa recipe with them. 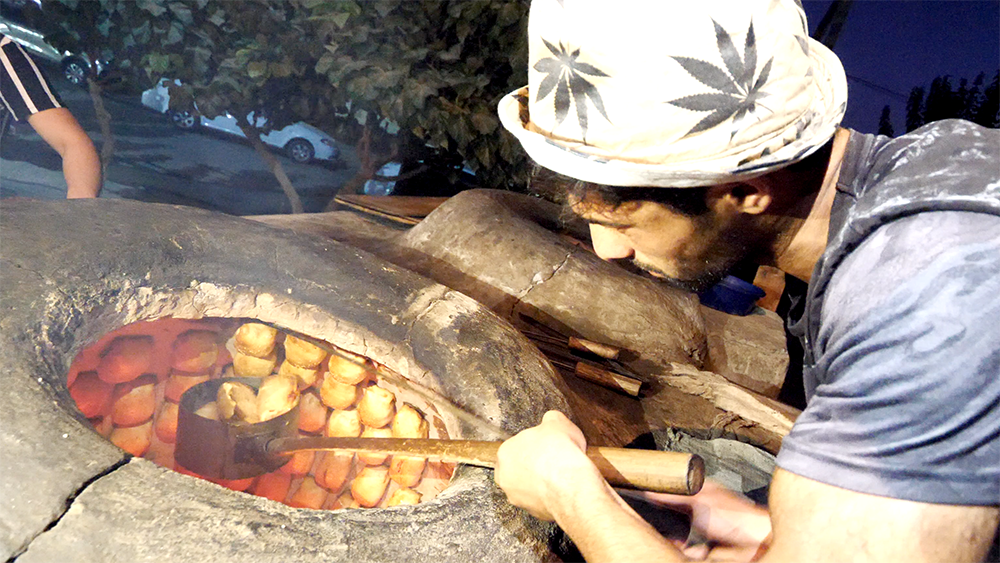 They’re crunchy on the outside and contain beef, onions, and lamb fat. You open them and eat them with a spoon! The onions were crisp, and the fat was juicy. You add some tomato sauce to them, which is so incredible! The tomato sauce was like a gazpacho and had some spice to it. It was the best part! 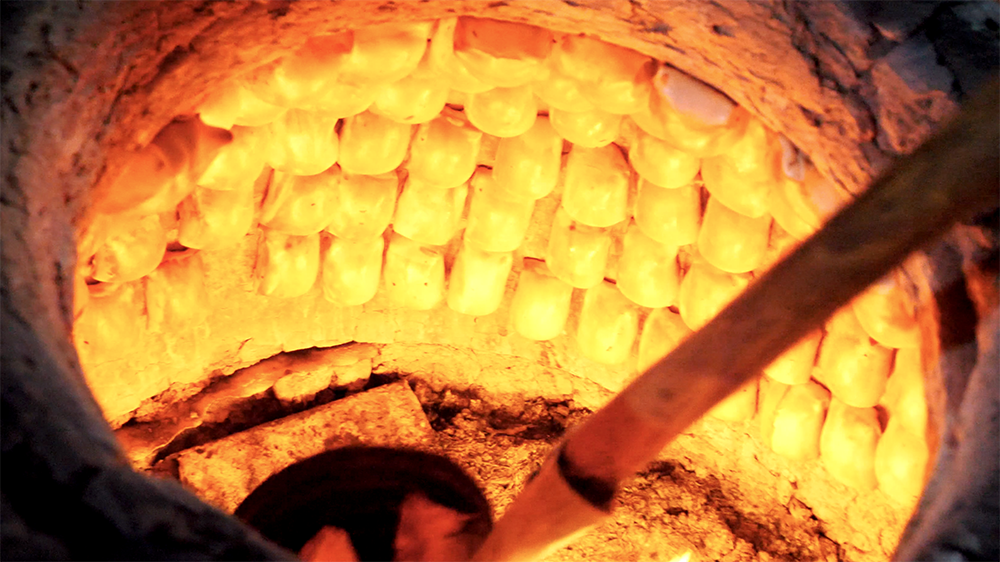 Then, we headed over to Denov Somsa, where they had just put the somsas in the tandoor when we arrived. It’s located in an open-air food court where you can get beer, kebabs, and more. I got a light local beer and tried a dense, chalky yogurt stick. Then I tried he national beer, which was more wheaty.

These somsas were from another region and were very buttery and crunchy. I bathed it in more of the spicy tomato sauce. It was my first spicy dish in Uzbekistan. I loved the onions and the beef inside. 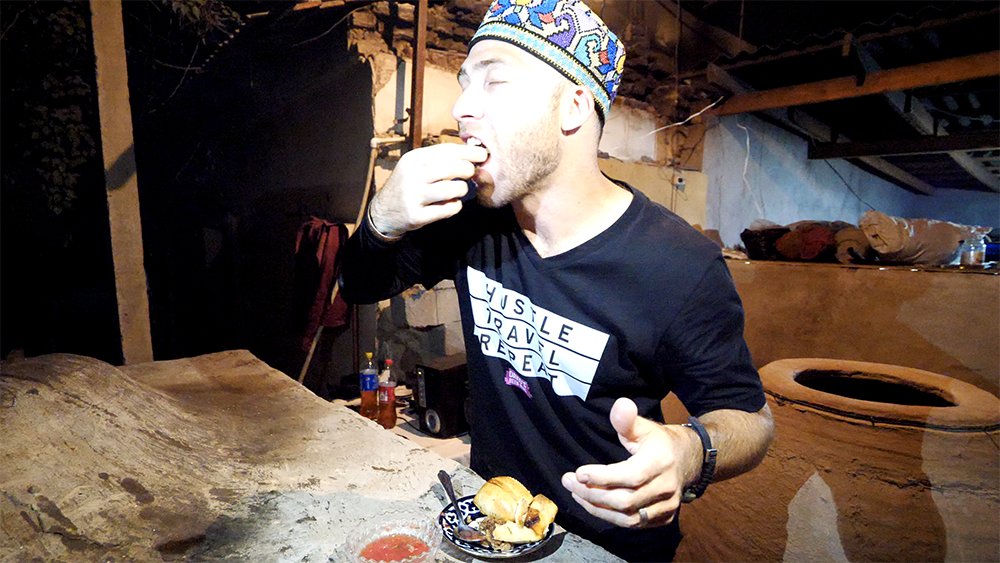 Somsas are the ultimate meat pastry. After I ate, I went to the back to see how they’re made! They flatten the dough, add the beef and onions so it’s really thick, and then they brush them with butter and put them in the tandoor! They’re so different from empanadas and samosas, which are always fried! 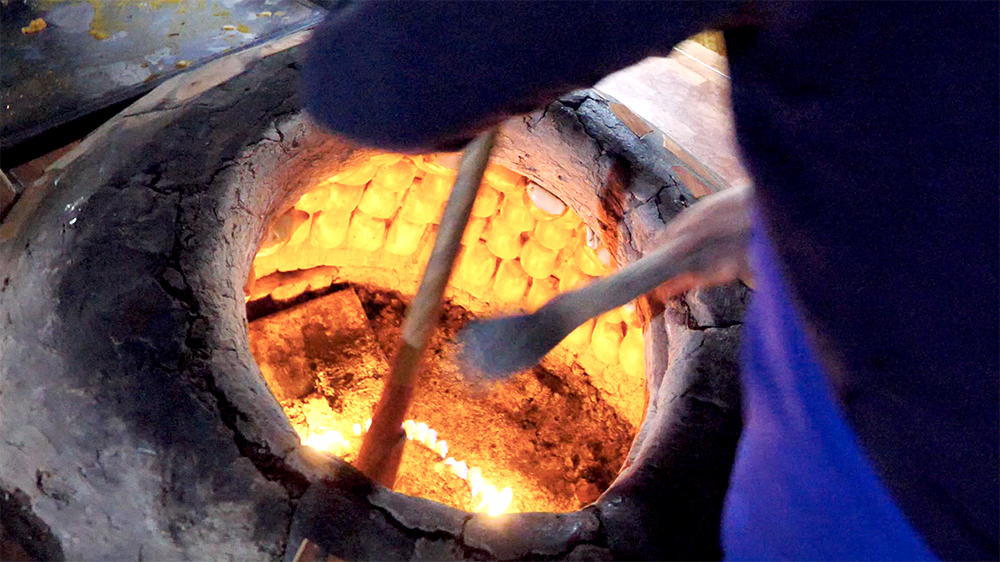 I hope you enjoyed coming on my Uzbekistan street food tour in Termez, Uzbekistan! If you did, please give this video a thumbs up and leave a comment. Also, please subscribe to my YouTube channel so you don’t miss any of my upcoming travel/food adventures!