My 14th and final day in Albania kicked off in the beautiful seaside city of Vlore! Because it was my last day, I’d be driving back to Tirana, but I’d be hitting lots of stops along the way. Join me as I finish up my epic road trip through Albania with some incredible Albanian fish at a unique restaurant and explore ancient Apollonia, Albania!

My day started at Bologna Hotel, a boutique hotel by the water on the boardwalk. They have 40 rooms and offer an amazing breakfast, and also have a nice terrace outside. The port area is nearby! Most of the rooms overlook the sea. 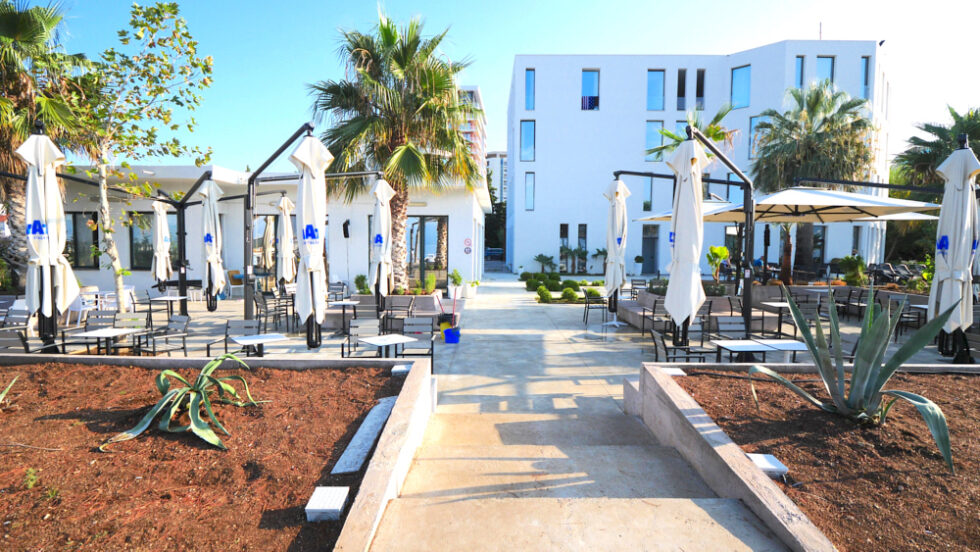 My friend Erjan from Travel Media EU and I started with a simple buffet-style breakfast of cheese, sausage, eggs, and some cake! You can also get coffee, juice, water, and tons of fruit. I drizzled some honey over my cheese, which was a nice salty-sweet combo! 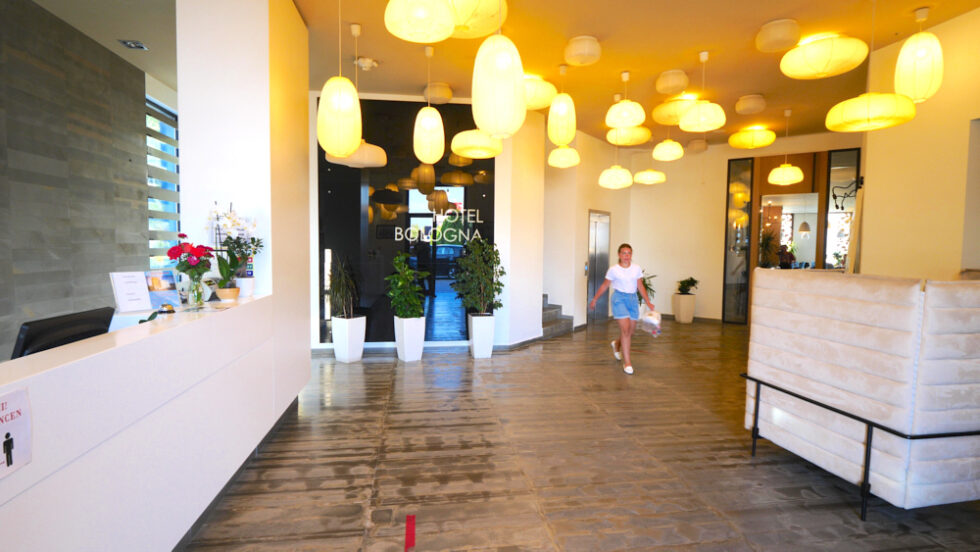 Then, I headed up to my room, where I had an open space with a king-sized bed, a desk, a nice bathroom, and a stunning view of the water. Downstairs, they also have an amazing lobby and a relaxing area where you can chill and lounge. 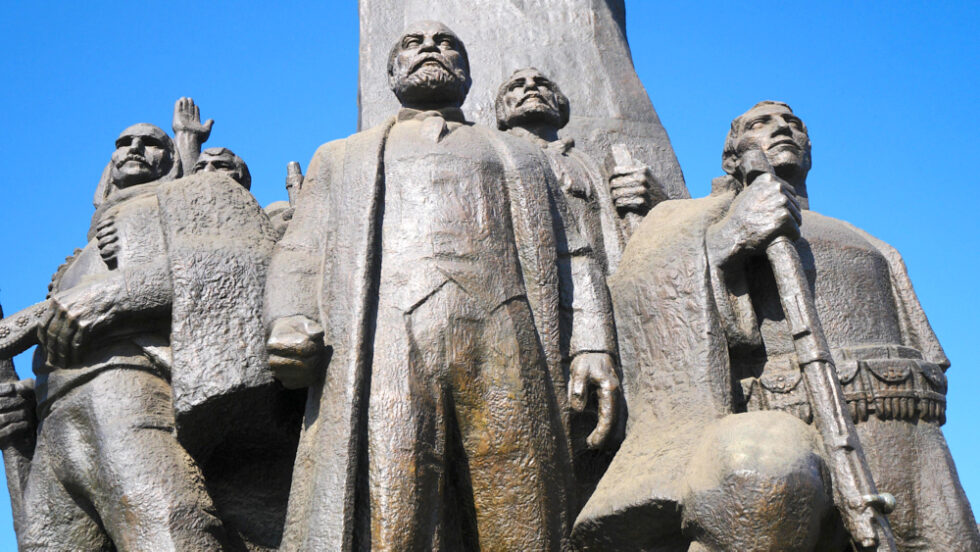 We left the hotel and drove back through Vlore on our way to Museum Road, a new area in the city that has colorful houses. We passed lots of beautiful buildings and cafes along the way, and stopped at Independence Square. It’s where Albania’s independence was declared on November 28, 1912.

Further on, we walked to Rruga Justin Godard, or Museum Road. The buildings are new, but they have recreated the style of Old Vlore. It’s really clean and wasn’t open yet, as places are still renovating. It’s beautiful and colorful and felt very Italian. It reminded me of Venice. Walking the street took me back in time! It aims to bring tourists to Vlore in the colder and warmer months. 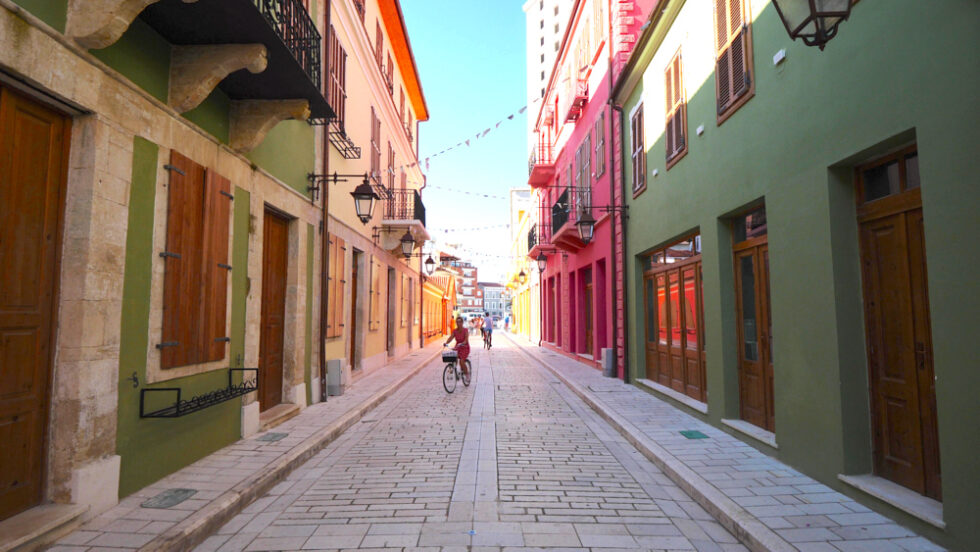 Then, we drove on toward the Albanian site of ancient Apollonia, which is 30 minutes from Vlore, Albania by car. We took the highway that connects Vlore, Durres, and Tirana. There were flatlands, olive groves, and salt flats along the road. There’s also lots of farmland! 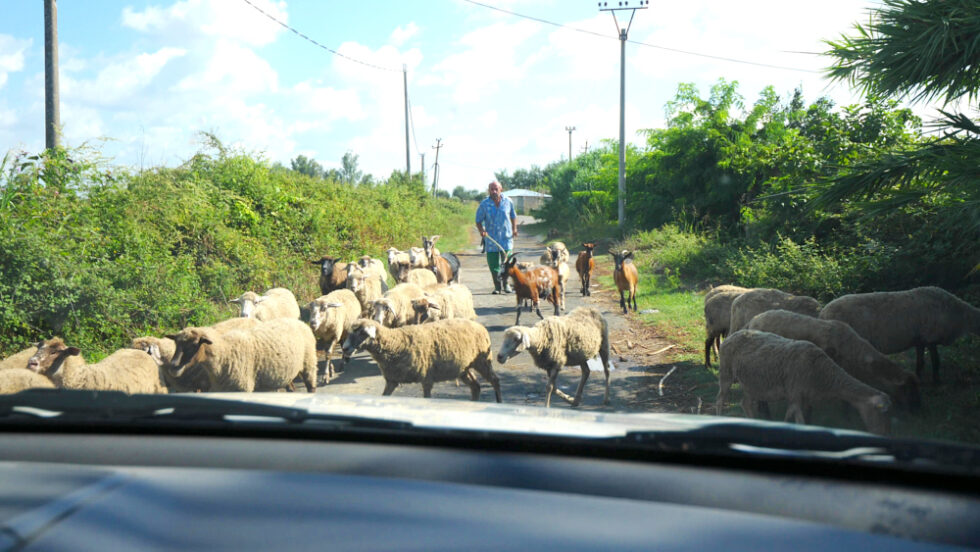 Apollonia was a massive, ancient trading center. It used to be home to 60,000 people, and only parts of it have been unearthed. Our first stop in the archaeological park was a map of the city. 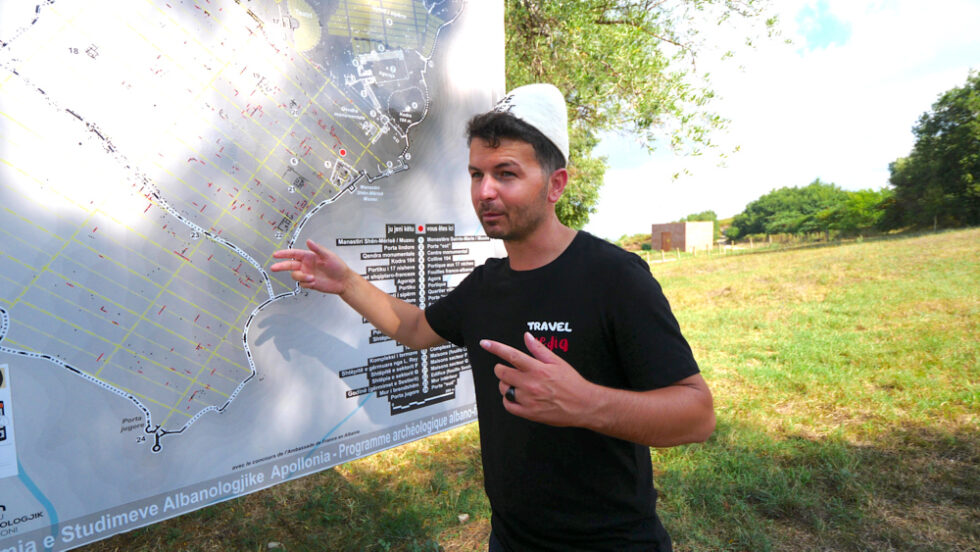 In the center of Apollonia is a theatre, a temple, and the bouleuterion, which is where the city council was held. The theatre, or odeon, was only for smaller shows and had a smaller stage. We also saw some housing and columns, as well as some shops. We also saw the pillars for the Arch of Triumph, which are the gates to enter the city. 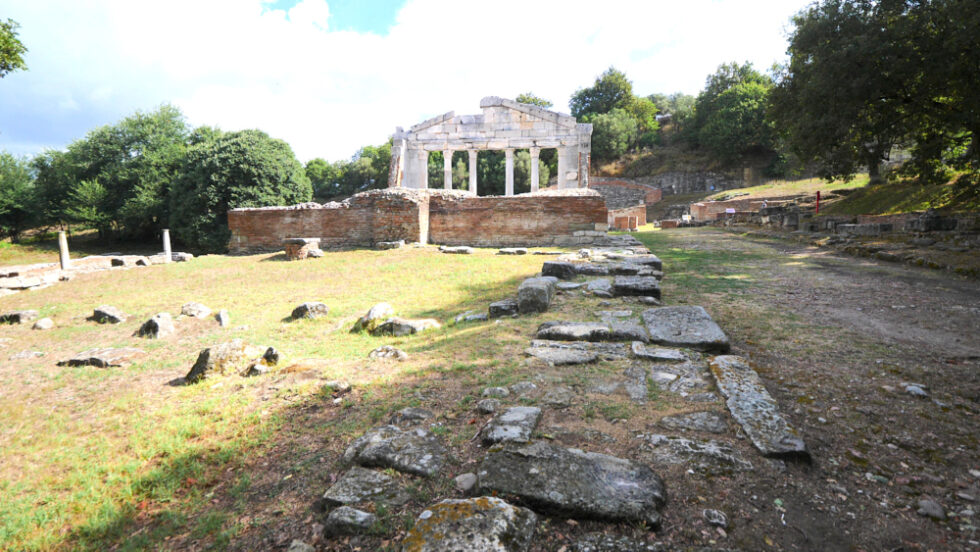 Apollonia was built right after Durres. There were about 30 cities at the time called Apollonia. The Albanian city of ancient Apollonia, Albania was first settled by Illyrian tribes in the 6th century BC. It’s one of the most important archaeological sites in Albania even though large parts of it have not been excavated.

In an ancient storehouse, I found a Hermann’s tortoise. I moved him somewhere where he could be safe. Then, we headed to the monastery. The stones from the floor are from the city in the 3rd century. After an earthquake, the river changed direction, and it was unsafe, and the people had to move from Apollonia. 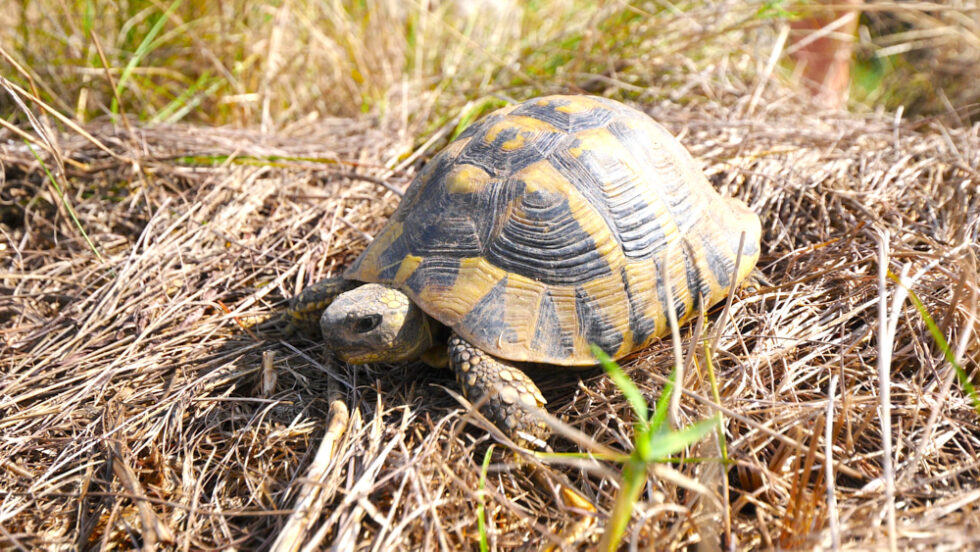 St. Mary’s Church itself was built in the 17th century with stones taken from archaeological sites. There’s a well inside and some beautifully sculpted columns. I could also see some 17th-century frescoes, which were fading. 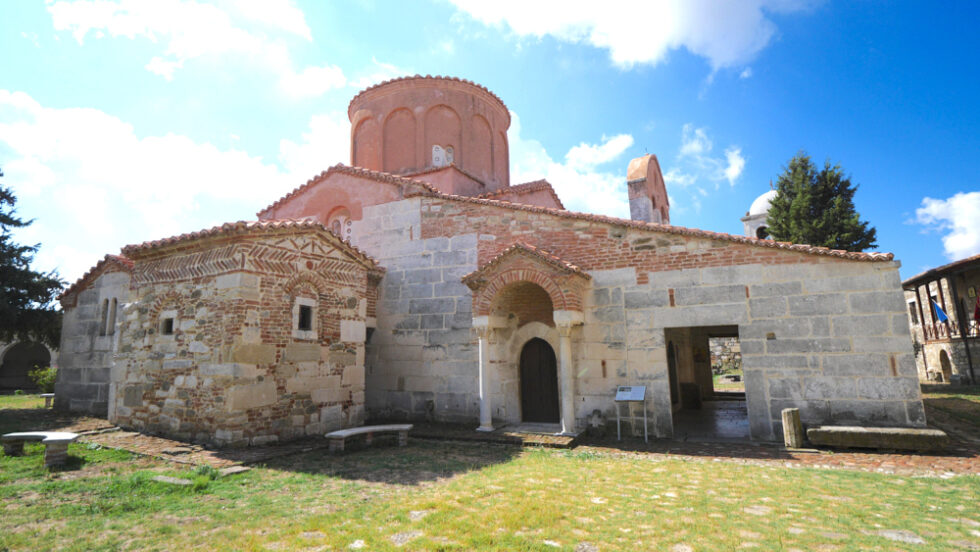 The church was like a small chapel with a large calendar on the floor. The statues here were found in the archaeological park. Some of them were part of tombs. There’s also some beautiful, massive pottery-like massive jars. There were also Roman statues from the 2nd and 3rd centuries, which are all missing their heads. There’s also a museum, but we skipped it because we were pressed for time. 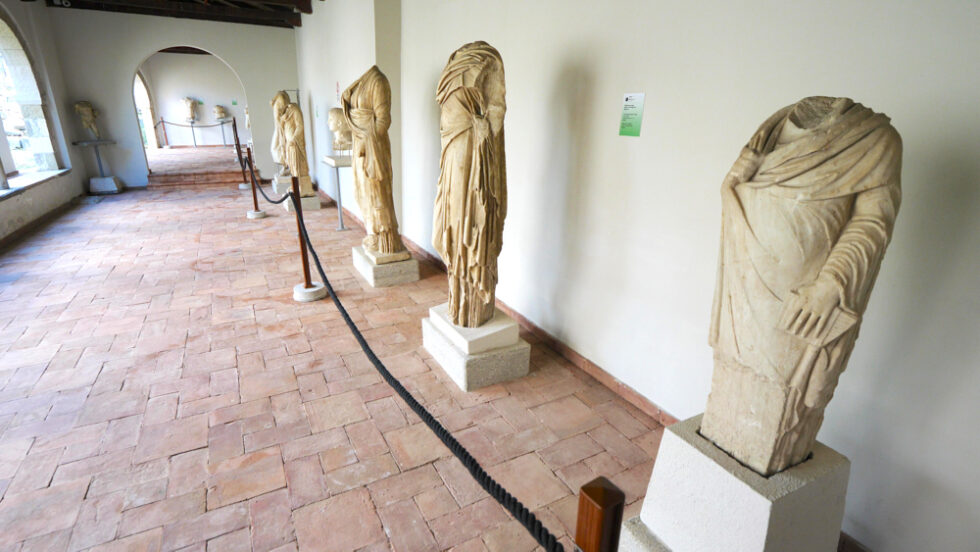 Next, we hit the road again and drove to a monastery at the top of a hill. It was built in 282. It’s the wedding place of the national hero, Skanderbeg! Inside are original frescoes and icons. Monks still live there, and it still functions as a monastery. Mass was taking place while we visited, so we had to be quiet.

Then, we drove north one hour through a park that’s famous for its pelicans. From there, we arrived at Restorant Ali Kali for a truly unique dining experience. It’s located about 90 minutes outside of Tirana. There, we met the owner, Ali, who took me to the kitchen, where I could see fish and prawns grilling over coals. I couldn’t wait to see how Ali serves the fish! 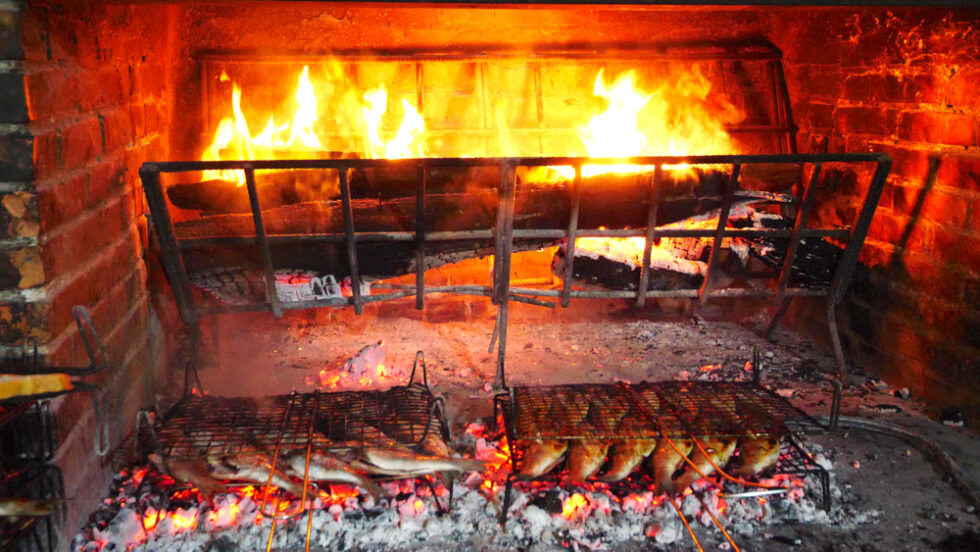 Inside the restaurant are lots of antiques including old TVs, musical instruments, knives, guns, and more. Ali and the staff are super welcoming. You can eat on a huge terrace outside that gets packed. The thing that makes this place so unique is that Ali serves his customers from horseback! 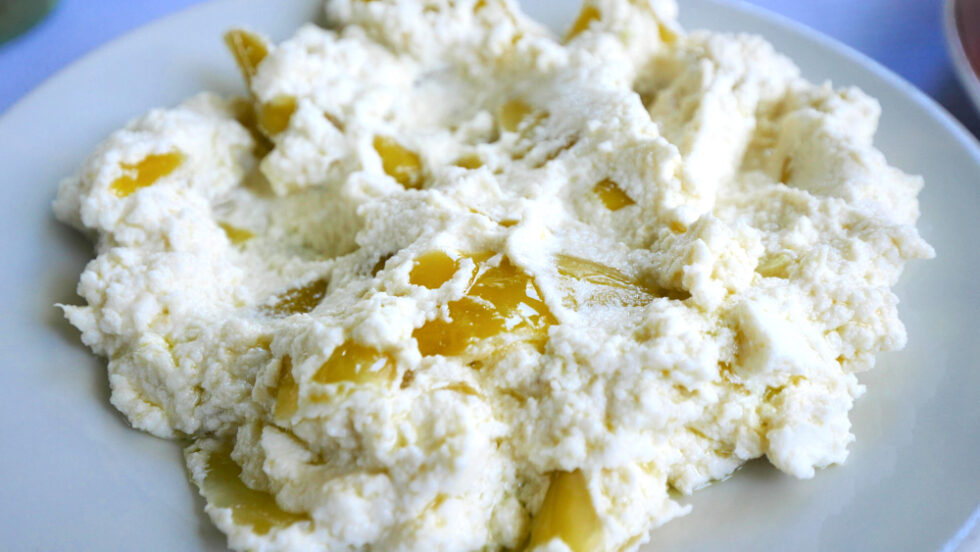 First, we had some blackberry raki, which was so cold and smooth! Then, we had some yogurt sauce with salad, cheese with pickled peppers, fërgesë, and French fries. The fries with yogurt and olive oil were amazing, and I loved the cheese with peppers! It was spicy and super tasty! 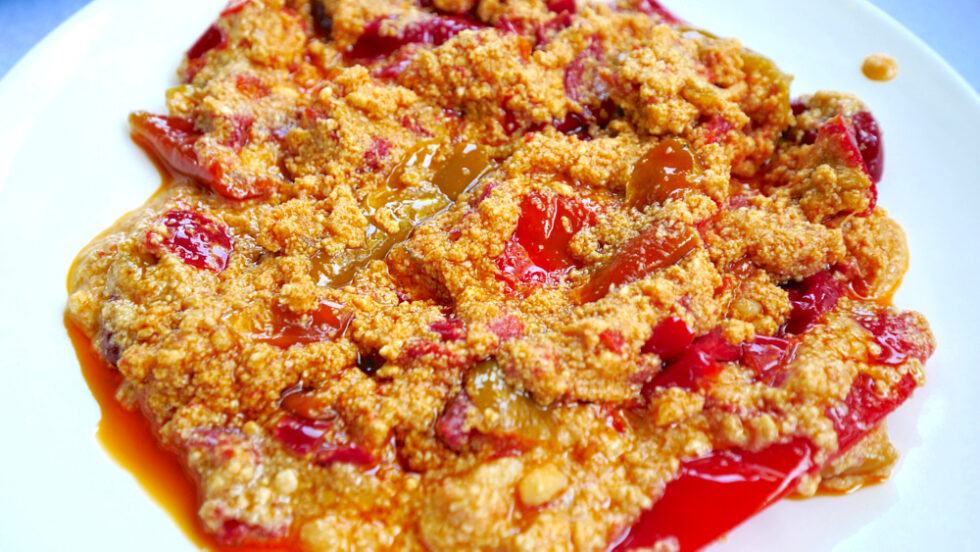 Next, Ali served some toasted white bread, which I piled with cheese and peppers and fërgesë. It’s a perfect combination! Then, we had some cheese that had been grilled and some tomatoes. The cheese was incredible! 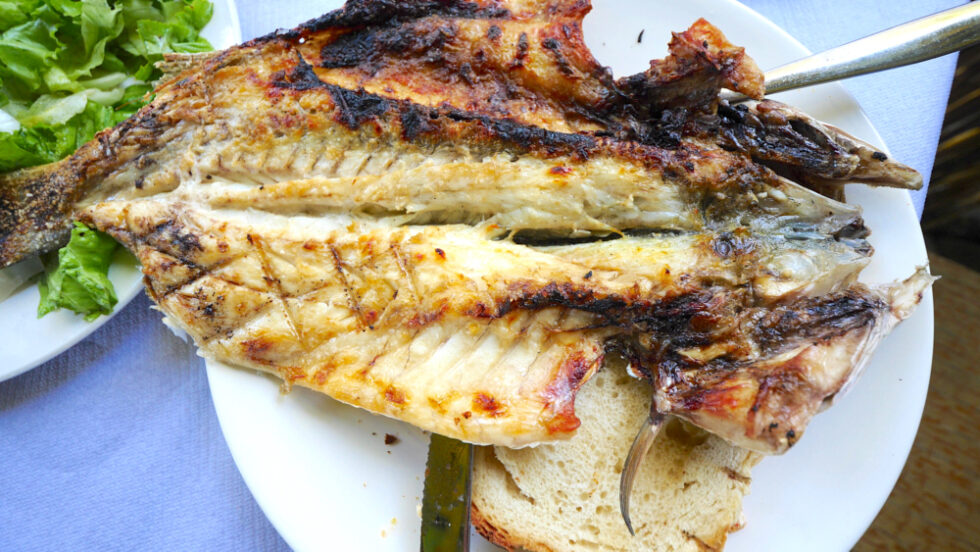 Then, I saw Ali riding the horse with the clamper full of fish! He served us a monster-sized wild sea bass, which is over 1 kilo! You can eat as much as you want! The fish is fantastic, but it is full of bones, so be careful. The flesh is so tasty, and the fish is all-you-can-eat. The skin is nice and crunchy. After a while, I just dug in with my hands.

Then, they brought us more fish and some grilled shrimp. The fish was so hot and fresh and the meat was like butter. I had to go through it slowly to be careful of the spines. But the meal was so incredible, the restaurant is one of my favorites of all time! 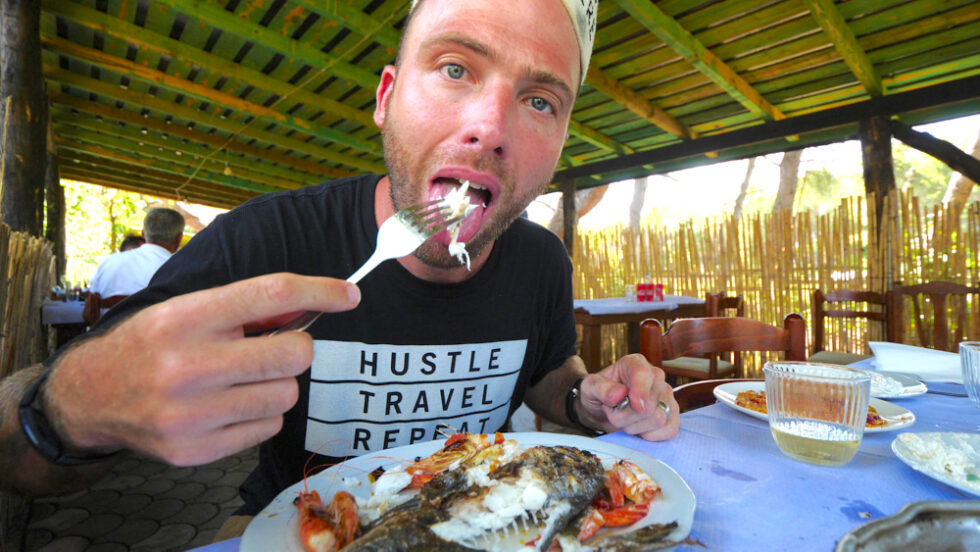 We finished up with some fresh yogurt with honey, which was more honey than yogurt! This dish is a staple in the Balkans and one of my favorites. What an incredible experience visiting the Albanian ancient city of Apollonia, Albania. I have to give a huge thanks to my friends at Travel Media EU, Balkan Pearls Tour Operator, and Rental Car Albania for making it such a memorable experience. 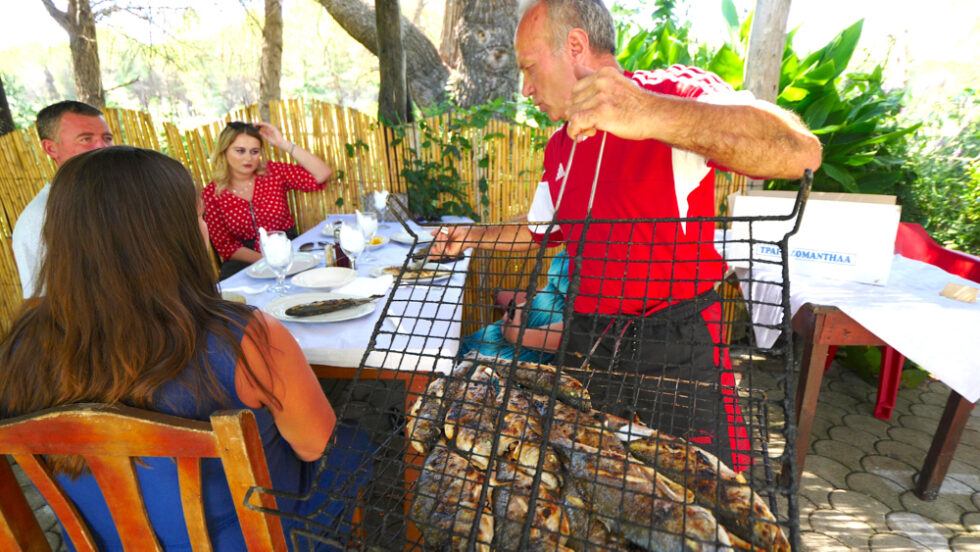 I hope you liked coming with me to have a wild Albanian restaurant experience after visiting ancient Apollonia in Albania! If you did, please give this video a thumbs up and leave a comment below. Also, please subscribe to my YouTube channel so you don’t miss any of my travel/food adventures around the world!