As my exploration of Islamabad, Pakistan continued, I set out to see more of this incredible city’s landmarks and try more amazing Pakistani cuisine! Join me on my Pakistan food tour in the capital, where I try Nagina Burger and visit some attractions in Islamabad, Pakistan!

My friend and guide Rashid from Manaky and I started our adventure in Saidpur Village, roughly 10 minutes outside of Islamabad by car. It was founded by an Afghan king named Mirza Fateh Ali who saw vegetables, fruits, and a spring as he passed through the area. At over 500 years old, it’s one of the oldest villages in Pakistan! 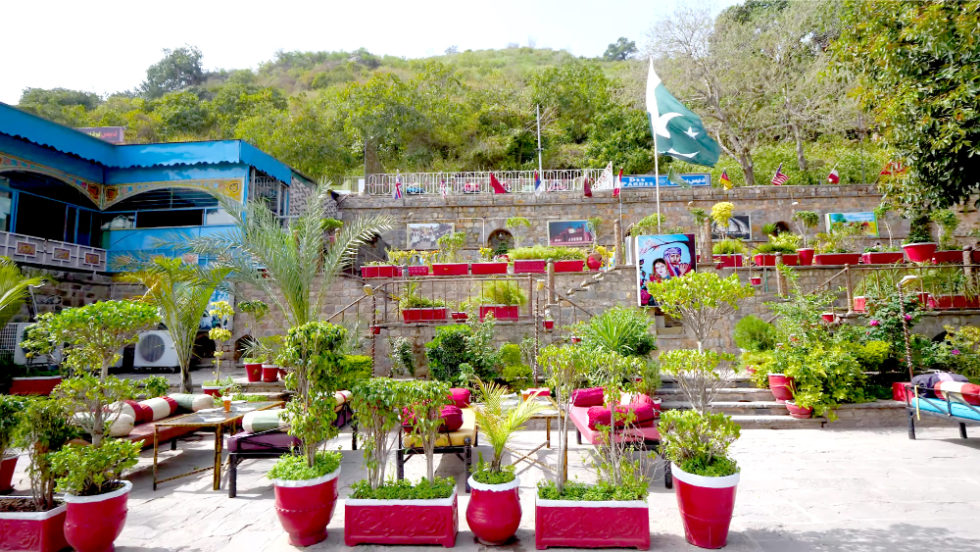 Our Pakistan food tour outside of Islamabad began at Des Pardes, a restaurant in the village that has covered, bungalow-like terraces as well as outdoor seating. Des Pardes means “guests and locals unite.” 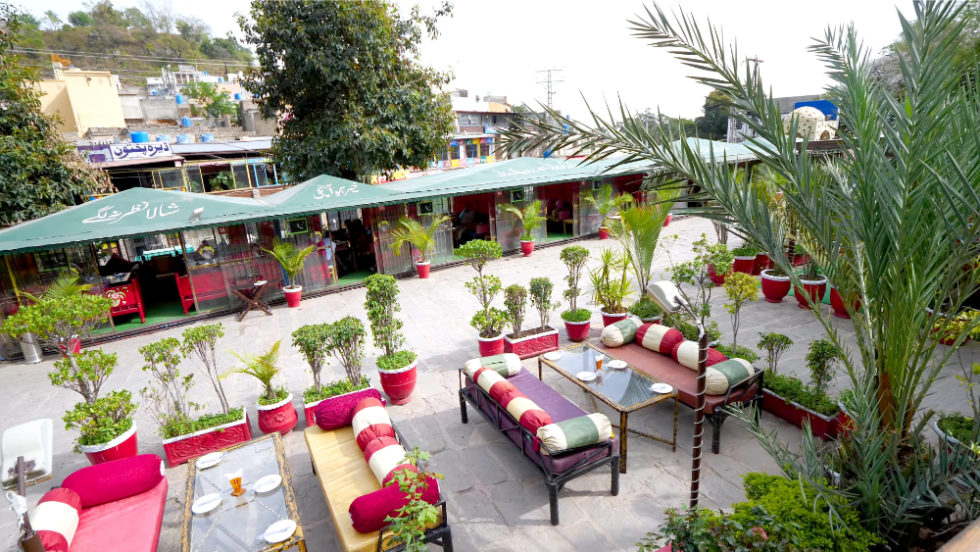 Like in many Pakistani restaurants, Des Pardes has comfortable mats and pillows in their little bungalows so you can lie down and relax after your meal. 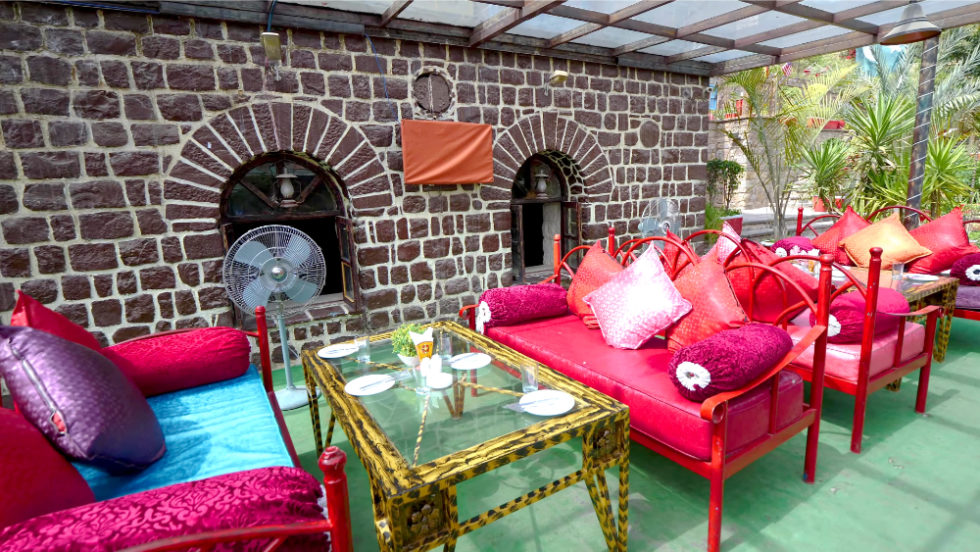 On this Thursday afternoon, I was looking forward to eating either beef or mutton karahi. Beef and mutton aren’t allowed on Tuesdays and Wednesdays, so the only thing I had the day before was chicken!

I started with some salad and vegetables with raita. The raita was phenomenal and different and contained lots of herbs. The creaminess of the raita with the crisp, moist cucumbers and spicy peppers was fantastic! I love vegetables, so having them with a dish like this is always great. 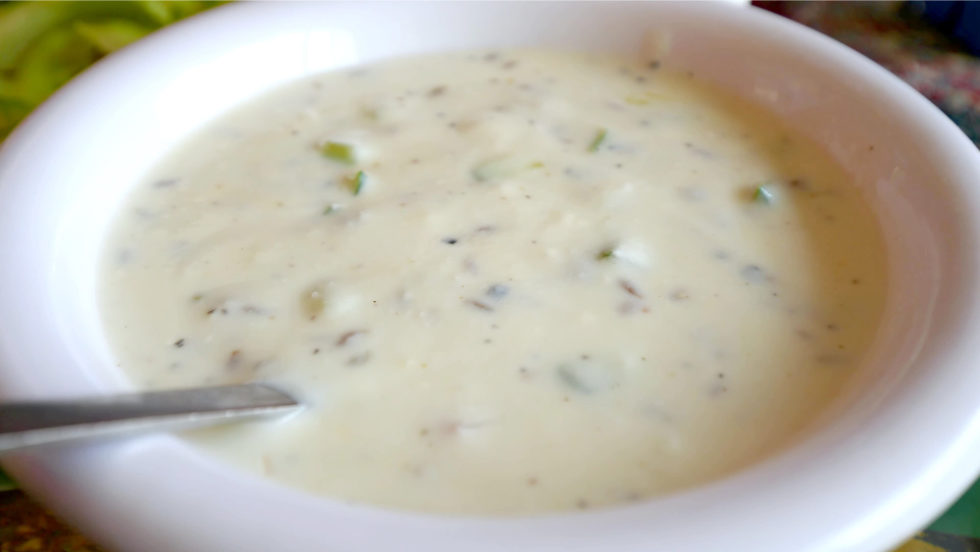 Then, our main course arrived! We ordered handi gosht, makhani dal, roghni naan, and garlic naan. I couldn’t wait to dive in! 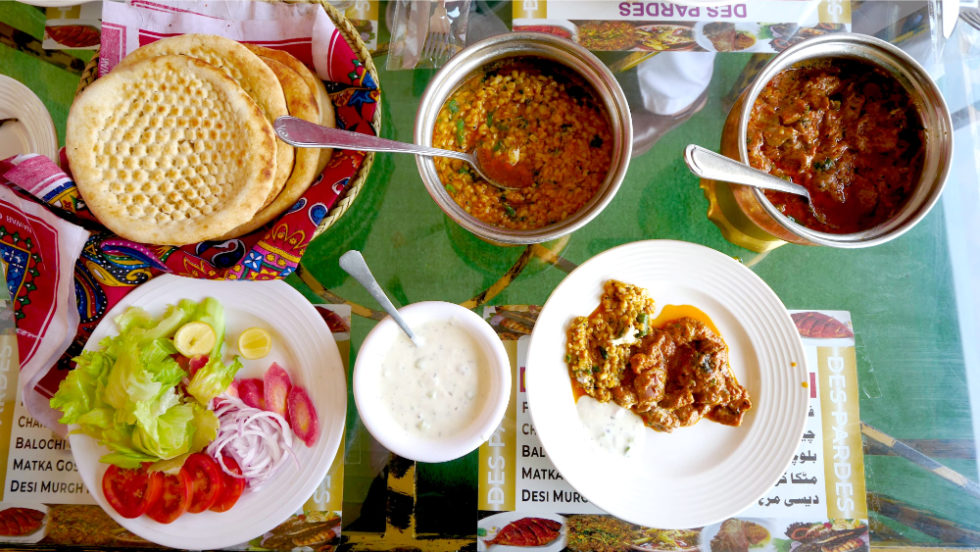 The hot garlic naan with the mutton-rich handi gosht was an unreal combination. The naan had a fluffy texture similar to a pizza crust, and the potent garlic was incredible with the meat. 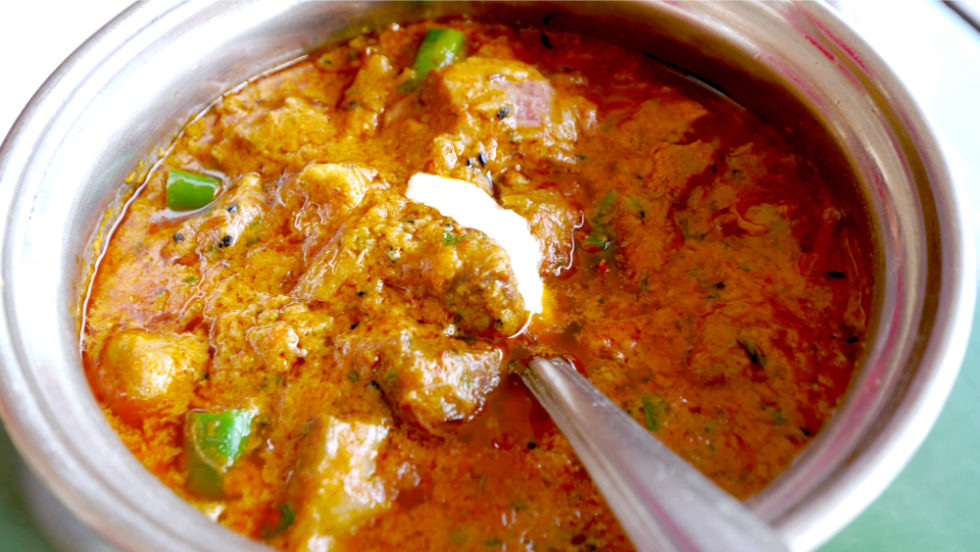 The dish was nice and hot, and a little oily as well. It was tender and fatty, and contained a small amount of spice. Adding the raita made it creamy and added an extra texture! It was the best mutton dish I’ve ever had! 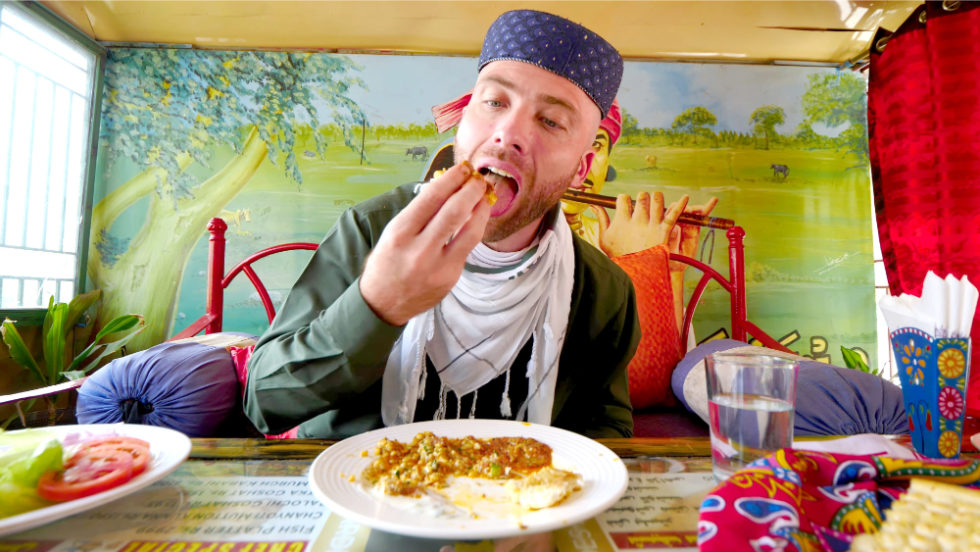 The makhani dal with the naan was also incredibly savory and tasty. I’ve eaten it many times before, but this one was unreal. Then, I mixed the makhani dal and the handi gosht for an even bigger flavor and texture explosion in my mouth. The naan tied it all together! 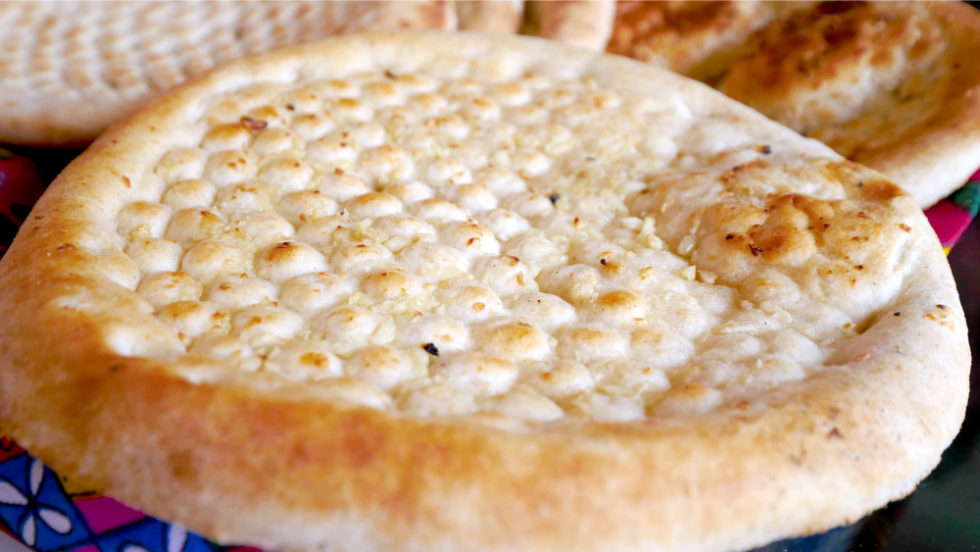 Then, I laid down for a bit to relax. As I was leaving, the restaurant owner presented me with a gift! The people of Pakistan are so kind!

Next, we continued to a 500-year-old white-and-yellow Sikh temple called Gurdwara Singh Sabah. The other is a 16th-century Hindu temple dedicated to Lord Rama called Rama Mandir. They’re both quite beautiful! 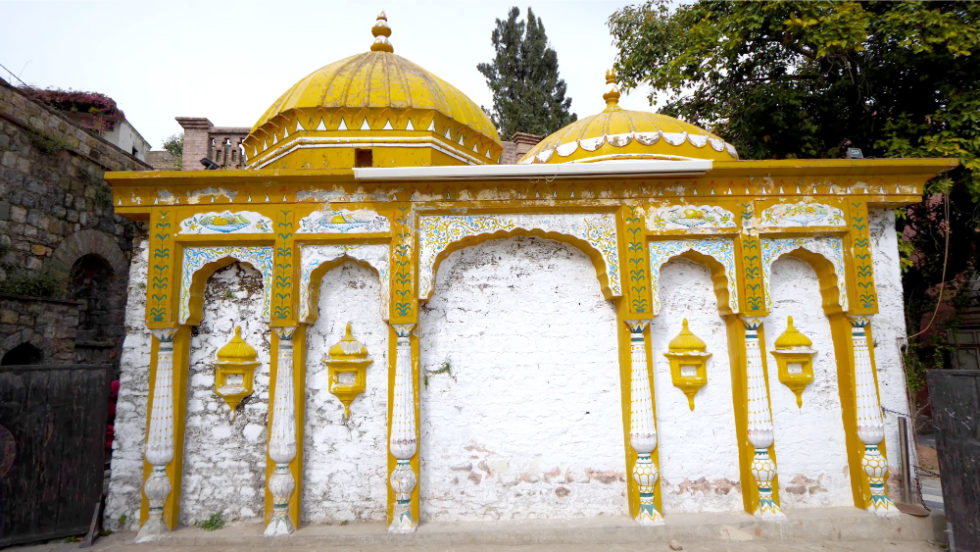 Rama Mandir is very colorful. You can walk through the courtyard and admire the arches and artwork. Some of the artwork on the walls is original, but some has been restored. 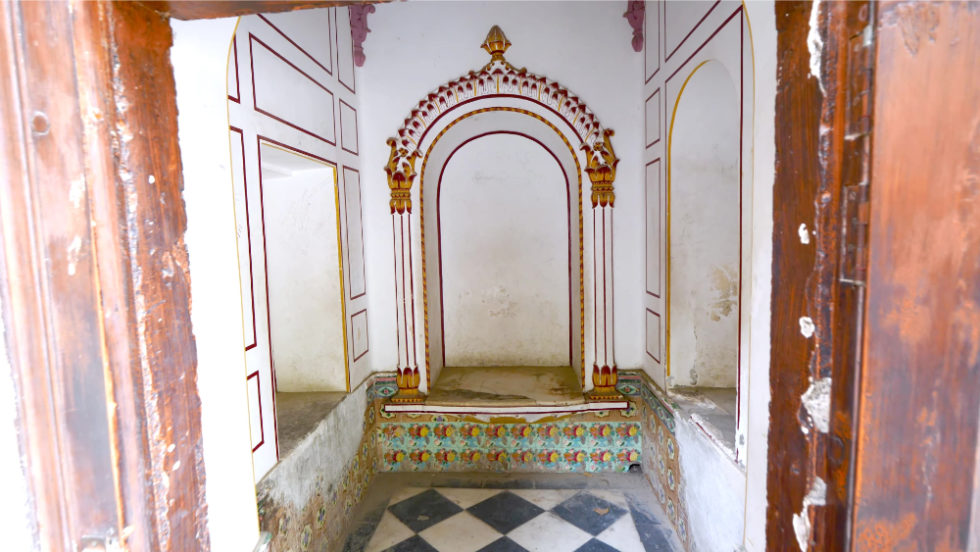 Next, Rashid and I headed up to the highest point in town to The Hot Spot, a coffee shop with a terrace that looks out over the village. It’s a real hidden gem! The view of the village is epic and I needed some coffee to wake up! 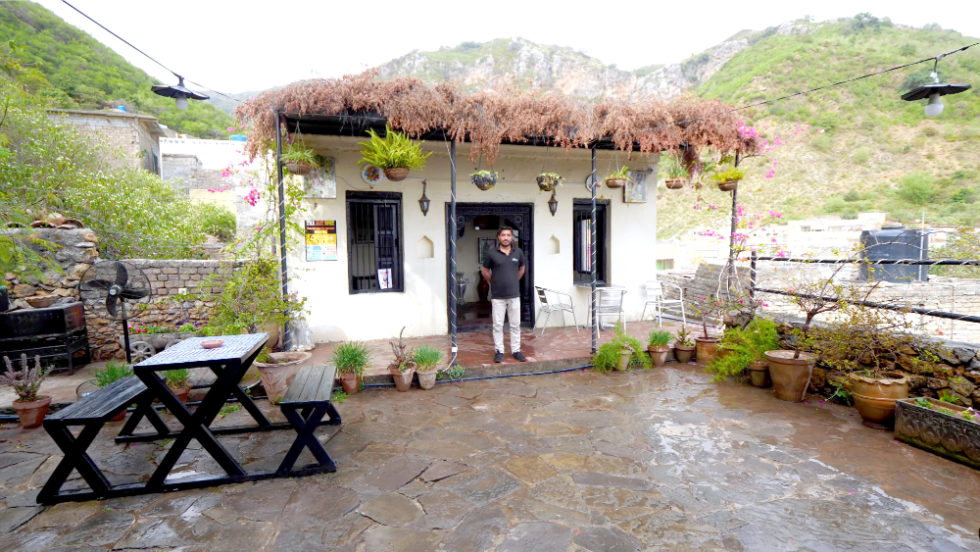 My double espresso did the trick and helped perk me up. I really liked that it was earthy, locally-grown coffee! Between the delicious coffee and the gorgeous view, it was so relaxing up there. And as had happened many times on this trip, the shop owner gave it to me for free! It truly blew my mind how kind and generous the Pakistani people are. 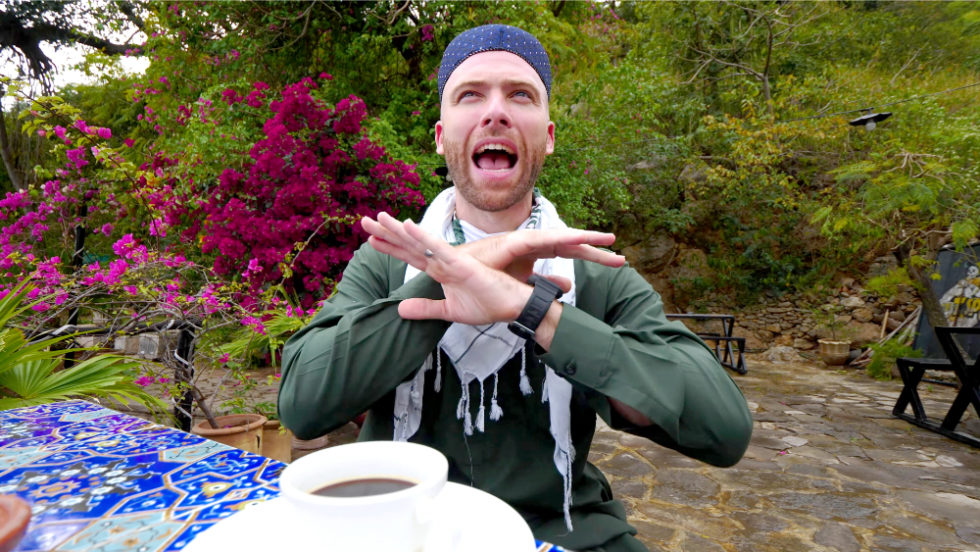 From the bottom of the hill, we passed the Art & Craft Gallery. Near it were lots of craft vendors selling paintings, painted tea sets, necklaces, and more. The man inside one of the shops paints the tea sets himself! 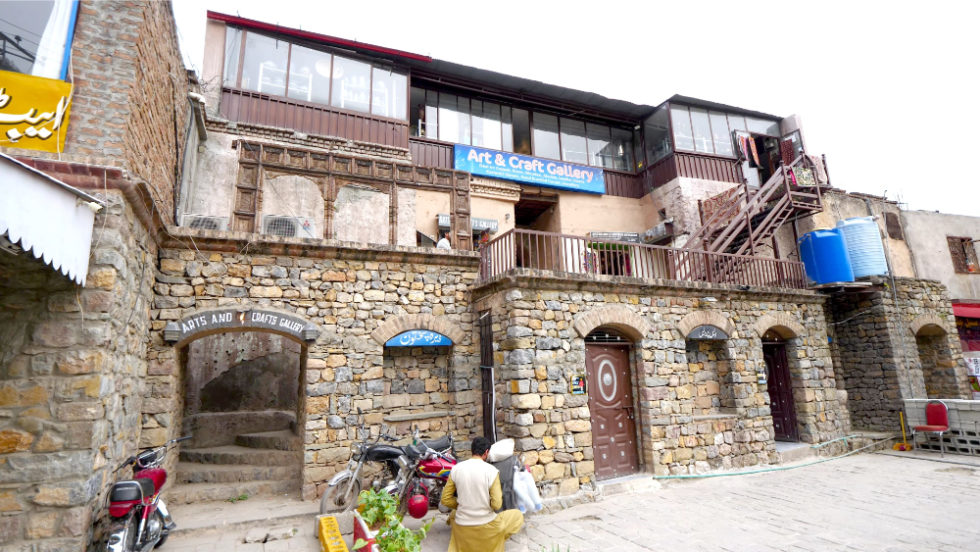 This area was like taking a step back in time. It was full of old, narrow stone staircases. Inside another shop were cups and animals made from onyx. They also sold painted bottles, jewelry, plates, and more! 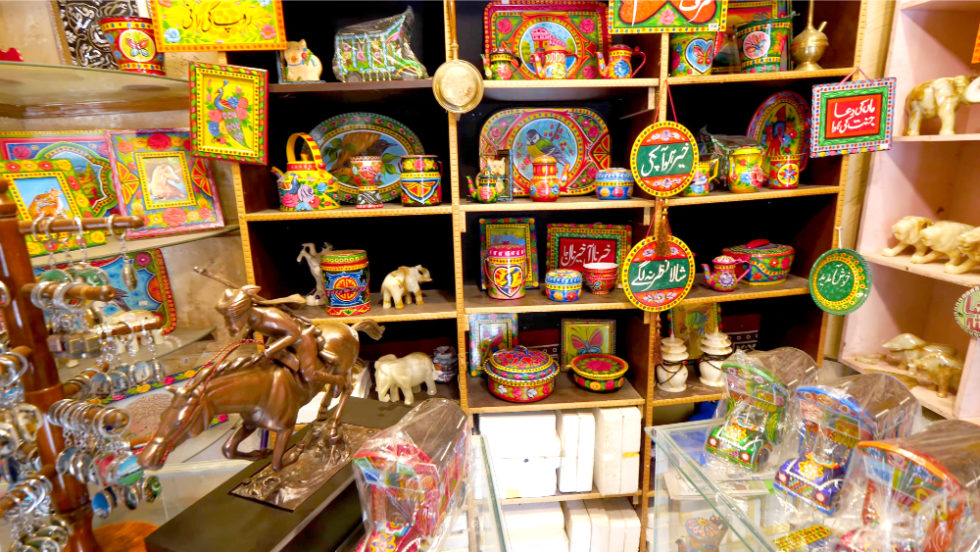 Next was a shop selling bracelets, earrings, necklaces, and more made from silver. They were antique-style and really pretty! I could tell that a lot of painstaking work went into creating them. 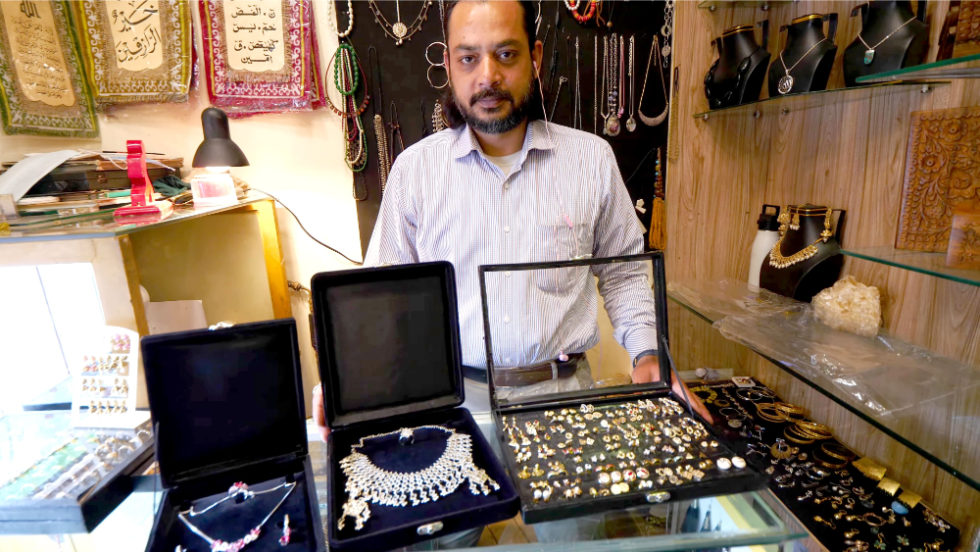 Then, Rashid and I headed to Daman-e-Koh in Margalla Hills, where you can find street food vendors and play areas for kids.

In addition to the games, rides, and bouncy house, there are also great views over the city. The vendors sell everything from dahi bhalle to popcorn to French fries to pani puri! 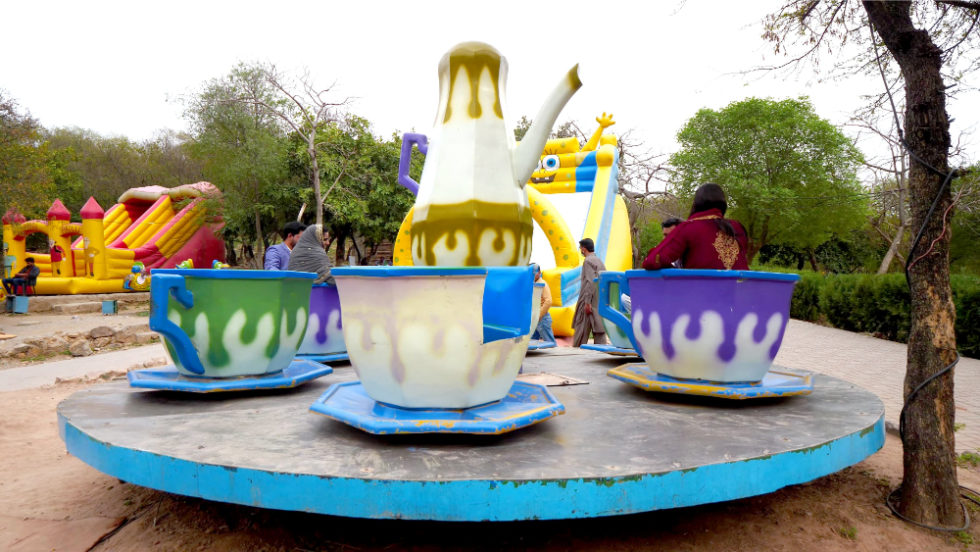 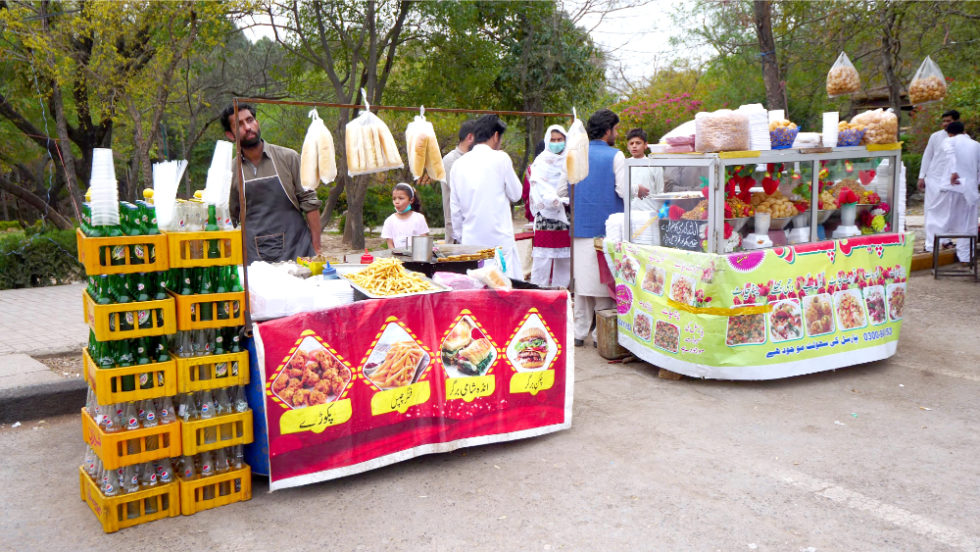 It was like a crunchy, cold salad! It wasn’t my favorite dahi bhalay of the trip, but it was still tasty and had a bit of spice! 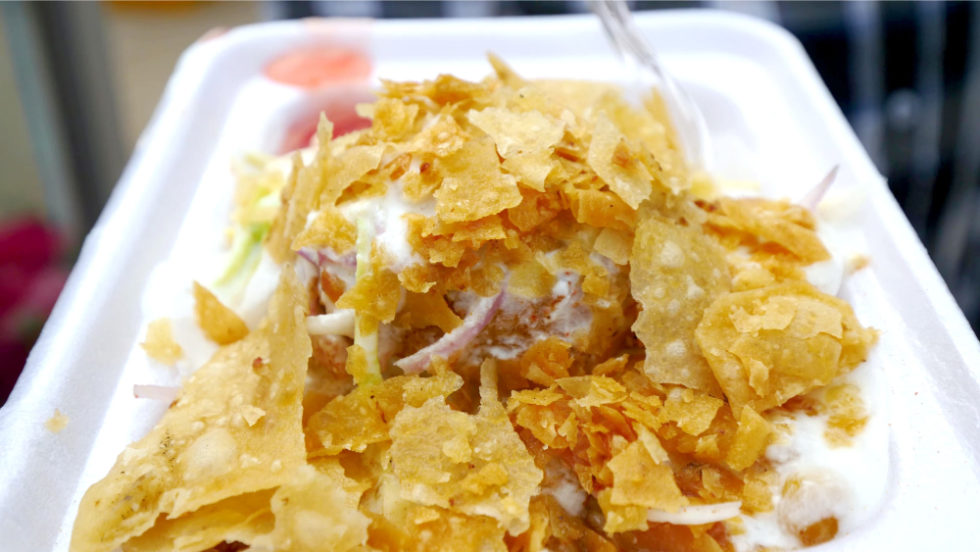 As we walked to the viewpoint, we saw some monkeys! The view itself was the best view of the city. I could see the Faysal Mosque, some of the few skyscrapers, the highway, and all of the green spaces in town! 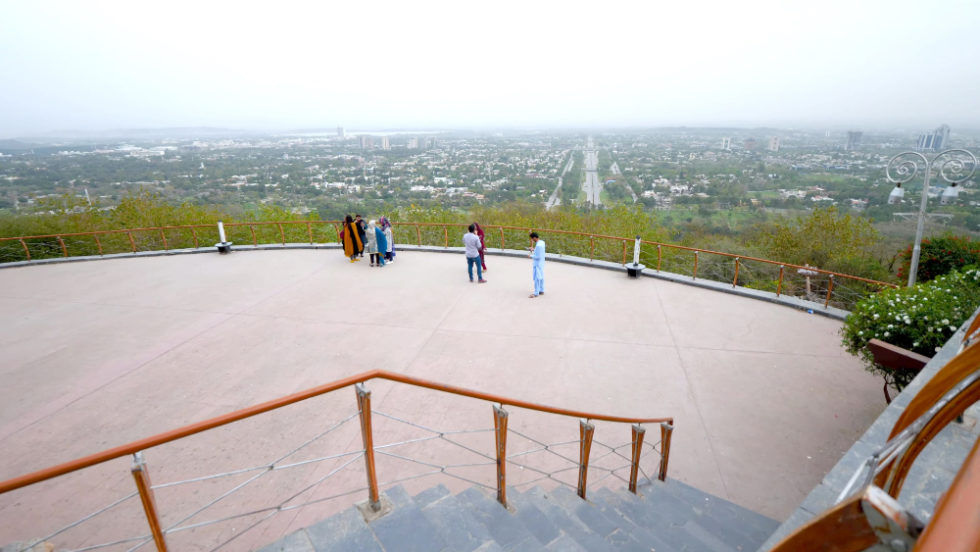 Then, we headed back down to the food vendors. I couldn’t stop by without having some pani puri, my favorite street food of all time! 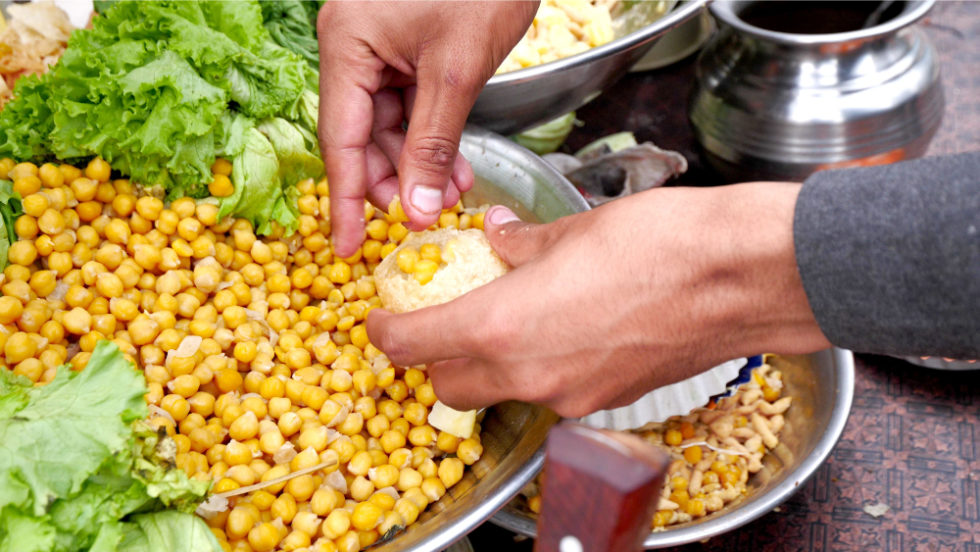 They gave me one large puri loaded with channa, tamarind chutney, masala, and potatoes. Along with the puri, the vendor gave me a bowl of pani, which is a spiced water that can be minty, spicy, sweet, or all three! Here, you dip the puri into the pani and eat it all in one huge bite! The sweetness of the tamarind was excellent, but the puri is so big, you can only eat a few of them! 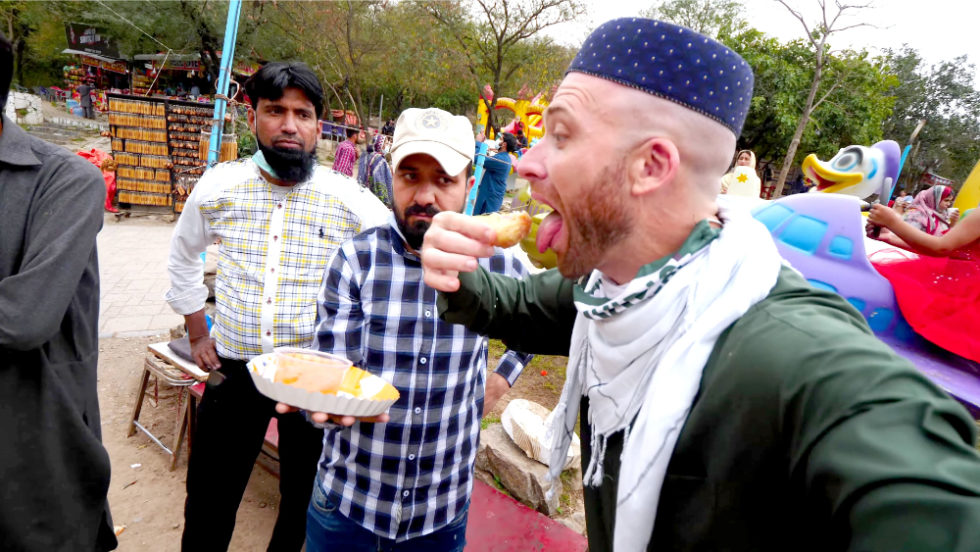 After a 25-minute drive back into the city, we arrived back in the F10 Markaz area to eat at Nagina Burger Point. It’s a famous spot in town. I decided to go with a toasted beef burger with a potato fritter, salad, sauces, and egg on top. 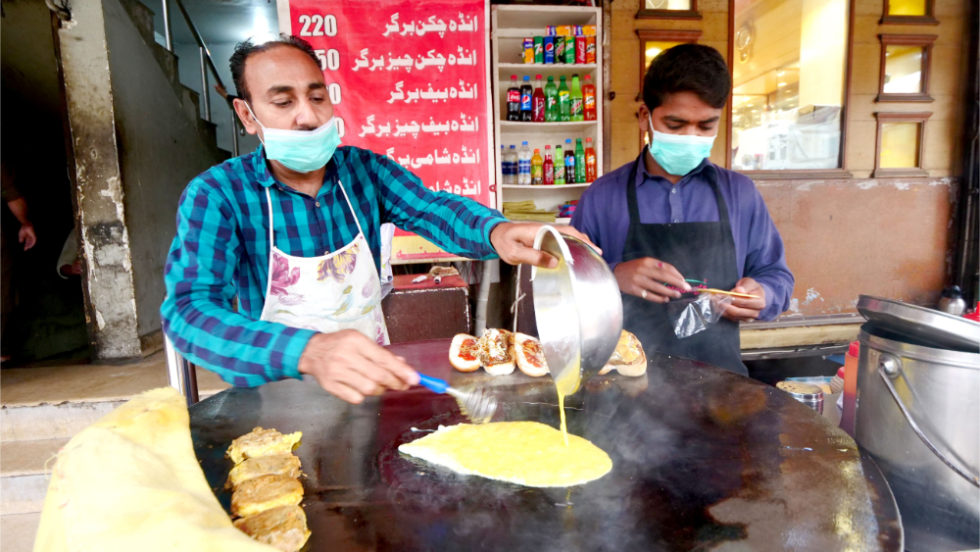 The burger is served with ketchup and raita. The sandwich reminded me of a panini. It was very juicy and flavorful, and quite messy. 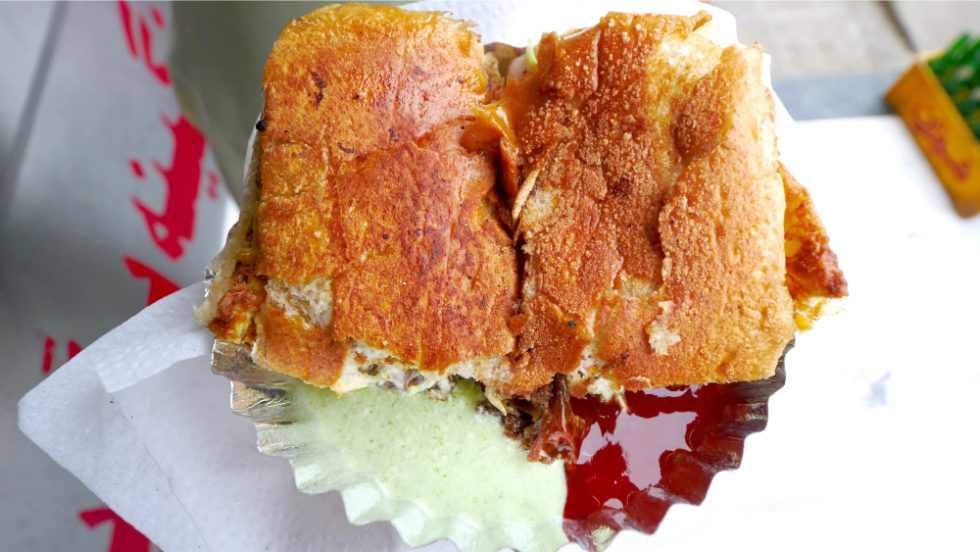 The toasted exterior was excellent, and the crunchy salad, savory meat, and sauces made it feel like a messy sloppy joe.

There are about 6-7 blocks of food shops in the area, from Syrian Shawarma places to food vendors to a man dying clothes out on the street.

We then stopped at Jamia Masjid Diwan Umar Farooq Mosque. It was built in 2002 but looked much older. The mosque had lots of green and aqua tiles on it, as well as an aqua dome. It reminded me of many mosques I saw in Uzbekistan! It’s very beautiful! 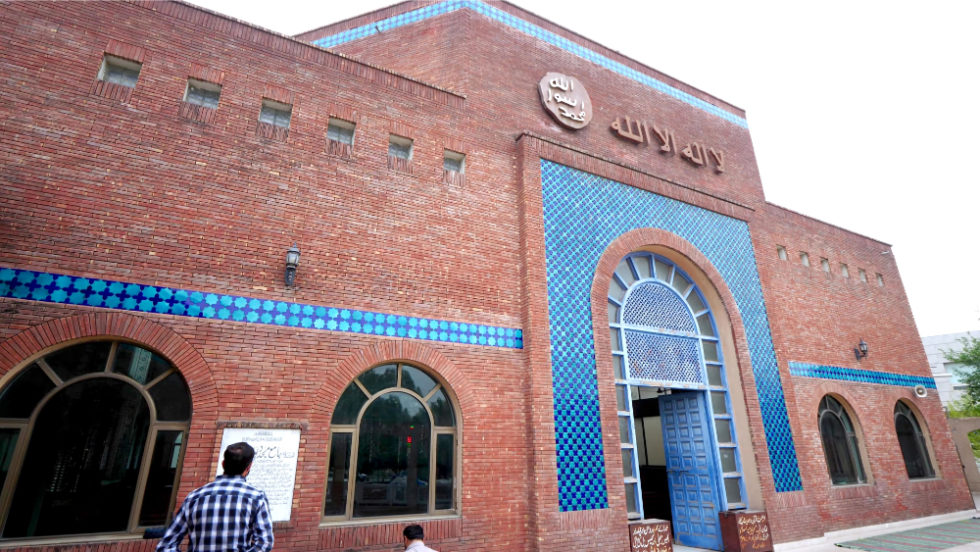 Finally, we finished up with some chai at a shop nearby with outdoor seating. They also made parathas and samosas. It was a great place to relax. The chai was very hot and so creamy and rich, it felt like there was malai on top! 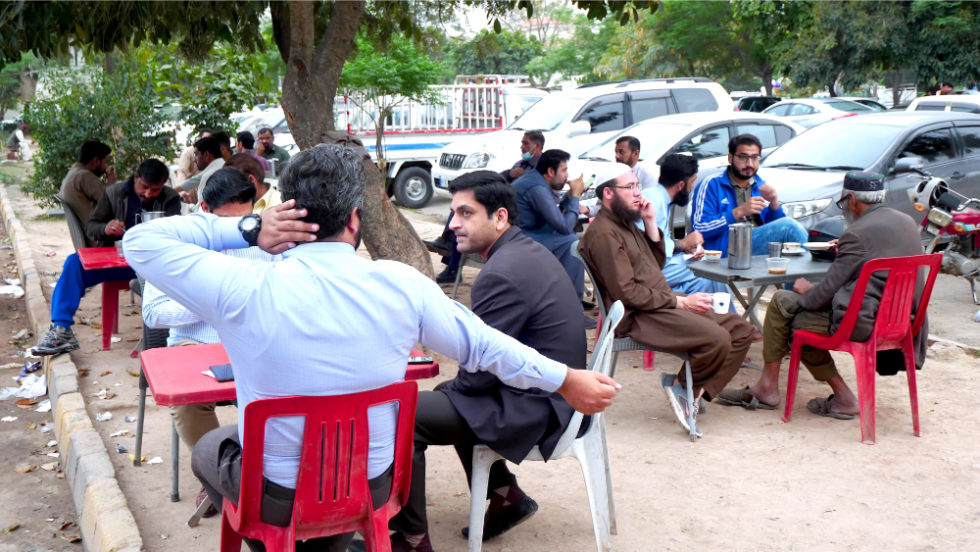 What a fantastic (and decadent) way to end my Pakistan food tour in and around Islamabad! I have to give a huge thanks to my friends at Manaky for taking such good care of me during my time in the country. Book with them when you decided to experience the wonders of Pakistan! 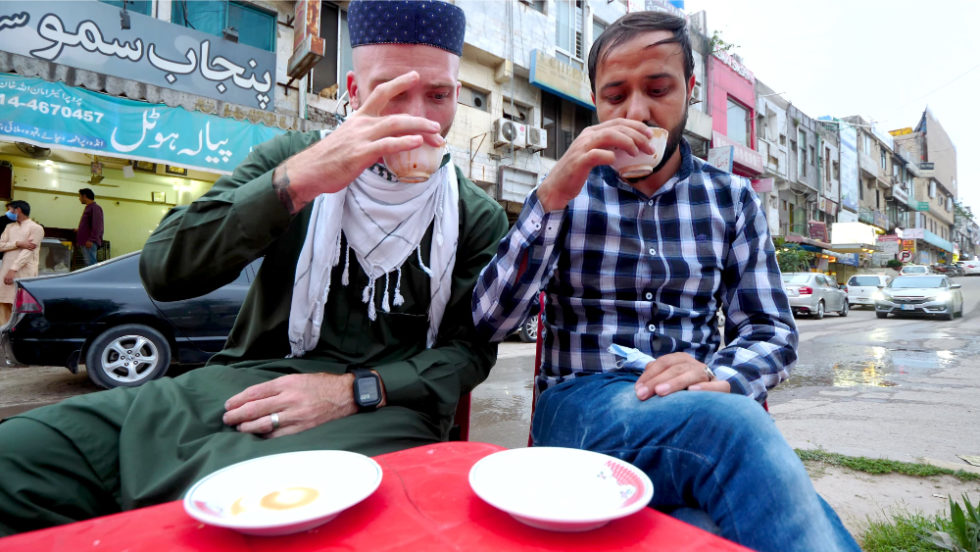 I hope you liked coming with me on my Pakistan food tour of Islamabad! If you did, please give this video a thumbs up and leave a comment below. Also, please subscribe to my YouTube channel and click the notification bell so you don’t miss any of my travel/food adventures around the world!