After leaving Islamabad, my adventures continued in Gujranwala, a city in northeastern Pakistan that’s known for its incredible food and its wrestlers! Come with me as I go on an extreme Pakistani meat street food tour and try camel kebabs, sparrow, and more in Gujranwala, Pakistan!

My friend and guide Rashid from Manaky and I began our Gujranwala street food adventure at Javaid Iqbal Restaurant near the entrance to the Old Town. There, we’d get some mutton chana. We also had some on top of rice, as well as raita and naan on the side. 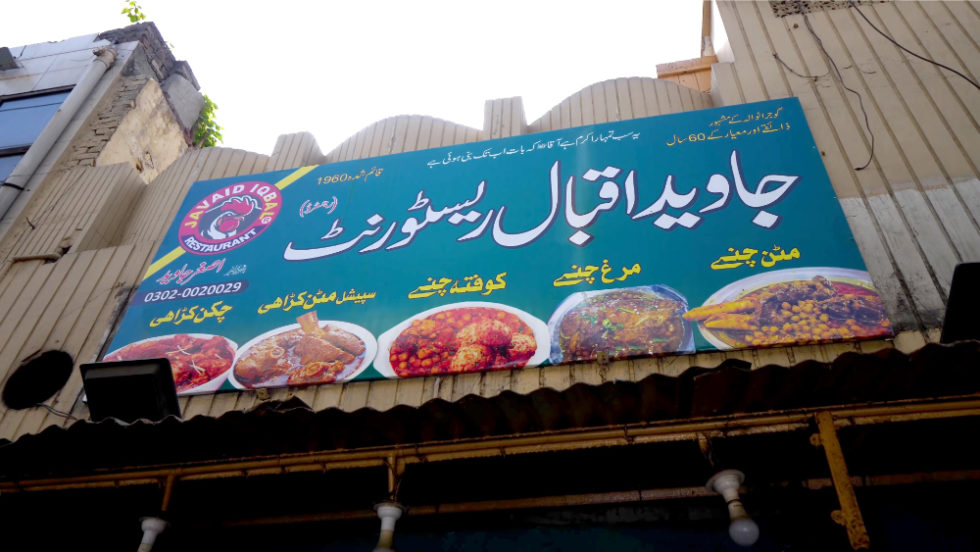 I’d never seen mutton with chana before. It looked very rich and flavorful! I couldn’t wait to dive in. 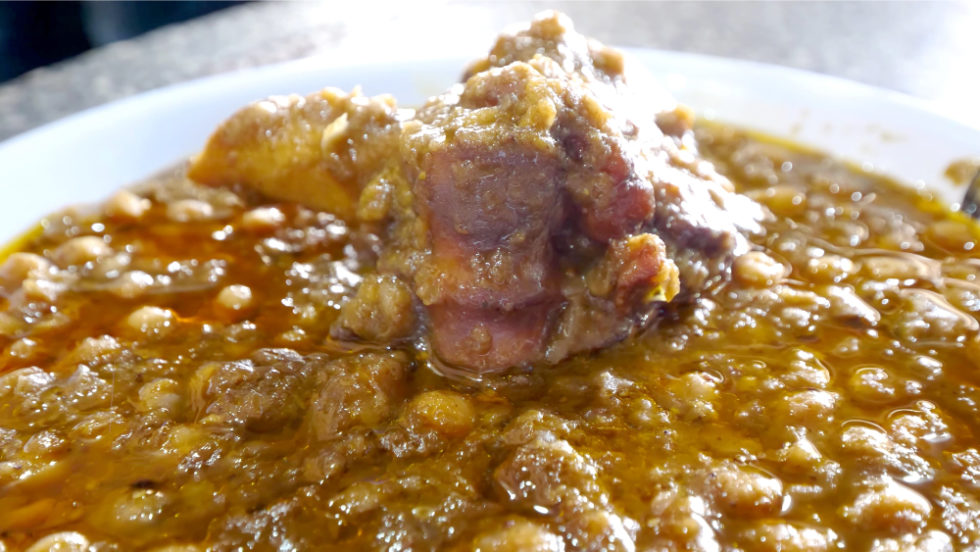 The naan was super chewy and fluffy, and the mutton chana wasn’t particularly spicy. The mutton was incredibly tender and the meat fell right off the bone. It wasn’t oily at all. 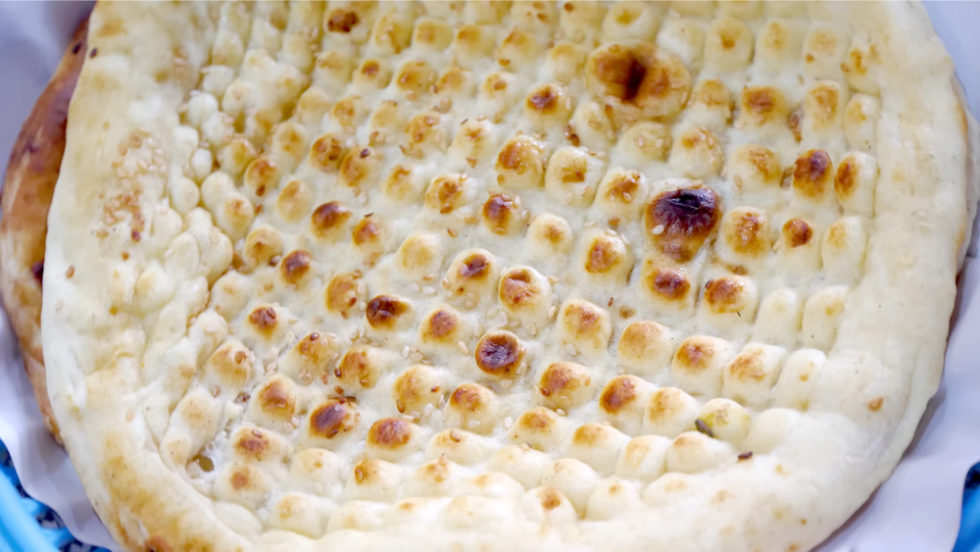 Eating a bit of the mutton with some of the basmati rice was quite tasty, too. This food is perfect for anyone who doesn’t love a lot of spice. Everything was mild but tasty. In the rest of Punjab, the food can be really spicy!

I loved mixing the mutton, a bit of raita, and the rice together. The raita fuses it all together and adds a creamy element. This raita was lighter and didn’t contain as many spices as others I’d had in Pakistan. 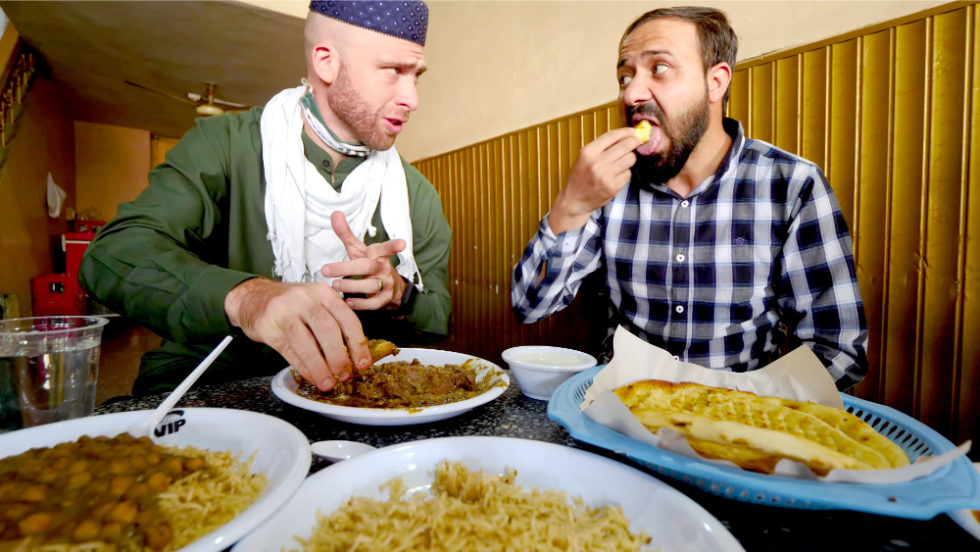 Then, Rashid and I headed out into the city. We saw the Brandreth Gate, which dates back to the 18th century and marks the entrance to the Old Town. 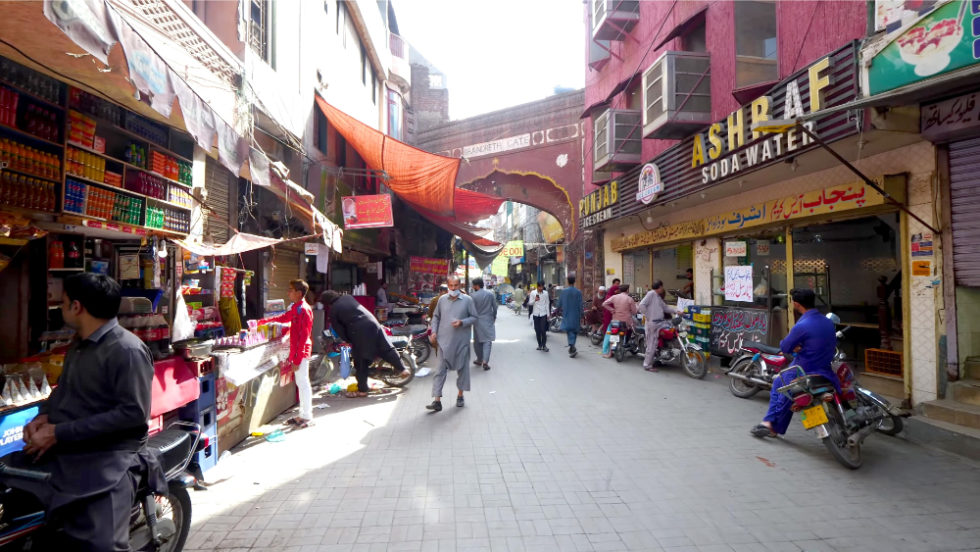 There was a nice mix of vendors inside the gate, including street foods selling kulfi, paan, lassi, naan, sweets, juice, and more. There were also vendors selling electronics and sunglasses. 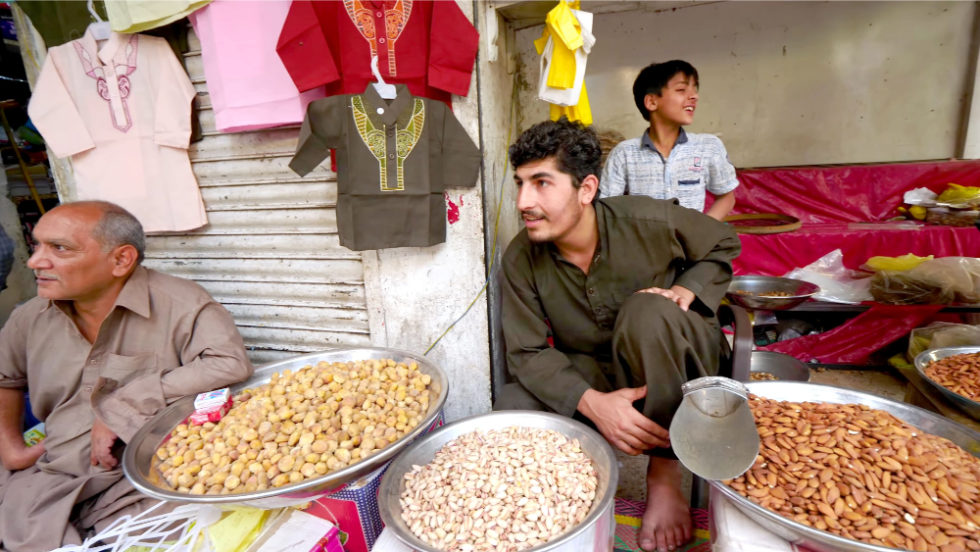 A vendor invited me over to try some lassi, but it was way too sour and bitter for me! It was very liquid and salty, but I prefer the thicker, sweeter lassi with the malai on top. This one left a bad taste on my tongue! 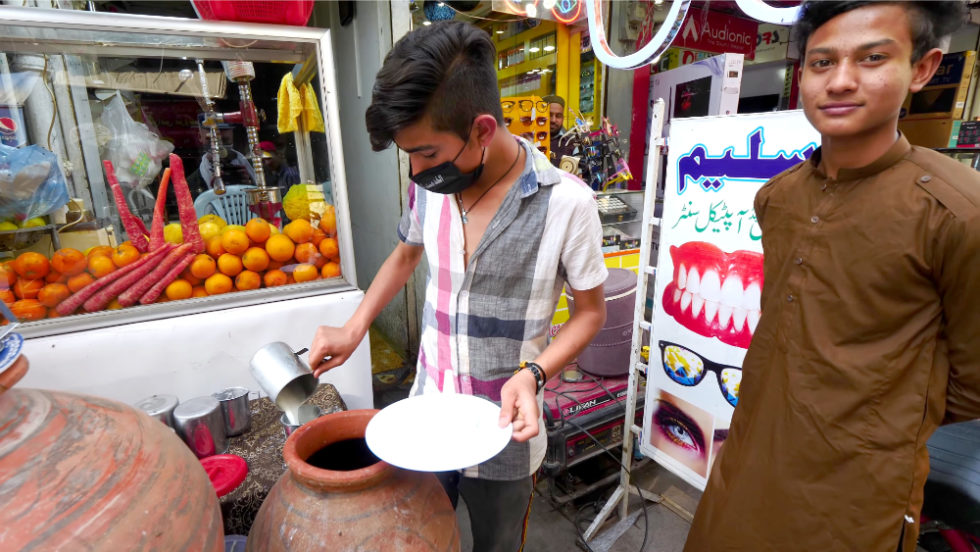 Then, we found Bismillah Juice Centre. I needed something sweet to get the salty taste out of my mouth. I got a big glass of orange juice. It was like sweet mandarin juice. They added sugar to it to make it sweeter, but it was fresh. 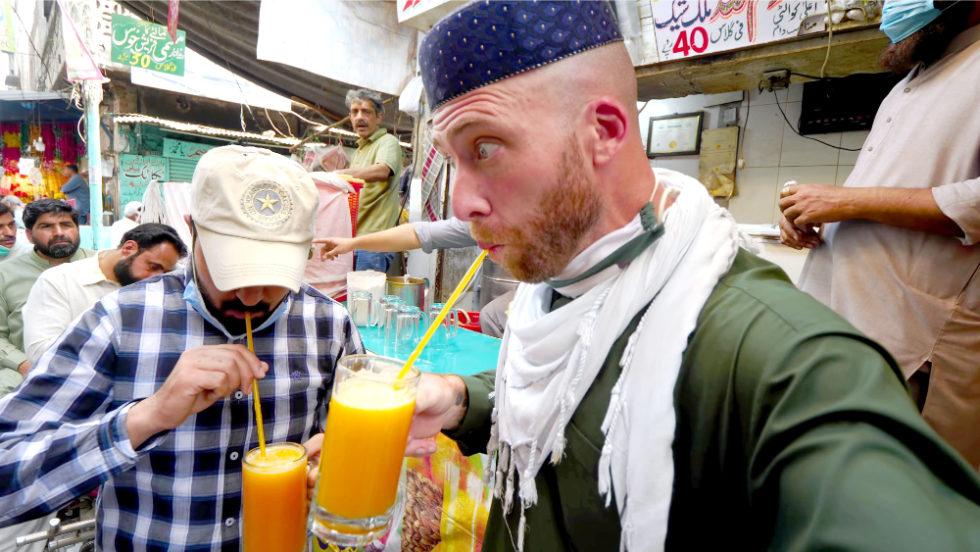 There was so much activity going on around us. This market was bustling and there were tons of people walking and driving around us. 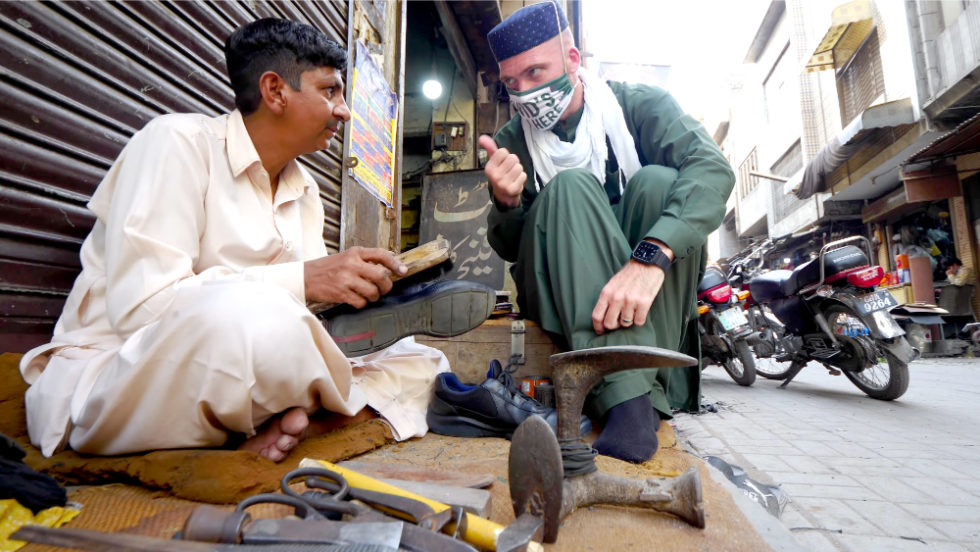 Our next stop was a vendor who polishes your shoes for 50 rupees, or about $0.30 USD. He made my shoes look shiny and as good as new. There’s no way you could tell that they were 10 years old!

Next, a kebab vendor at Ayoon Chaska Point stopped us and invited us over to try his kebabs and raita. The raita had some delicious, crumbly cheese inside! 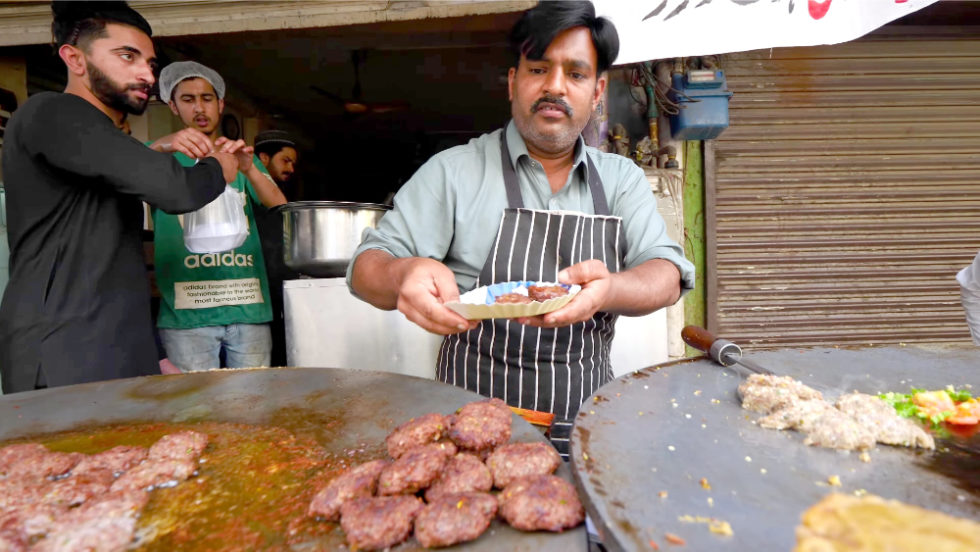 The combination of the juicy, slider-sized juicy minced meat; the spices; and the creamy raita, was outstanding. Dipping them into the raita was amazing. 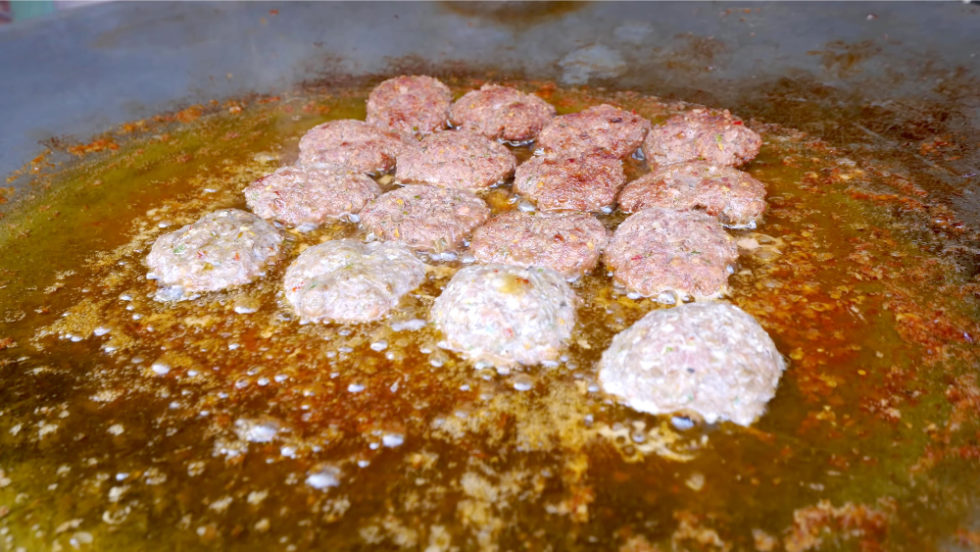 You can also get the kebabs diced up with some chilies, and egg, and some potatoes if you want. As I continued eating it, the heat snuck up on me. It was some of the best meat I’d had in the country so far! I found out that it was so good because it was actually camel meat! 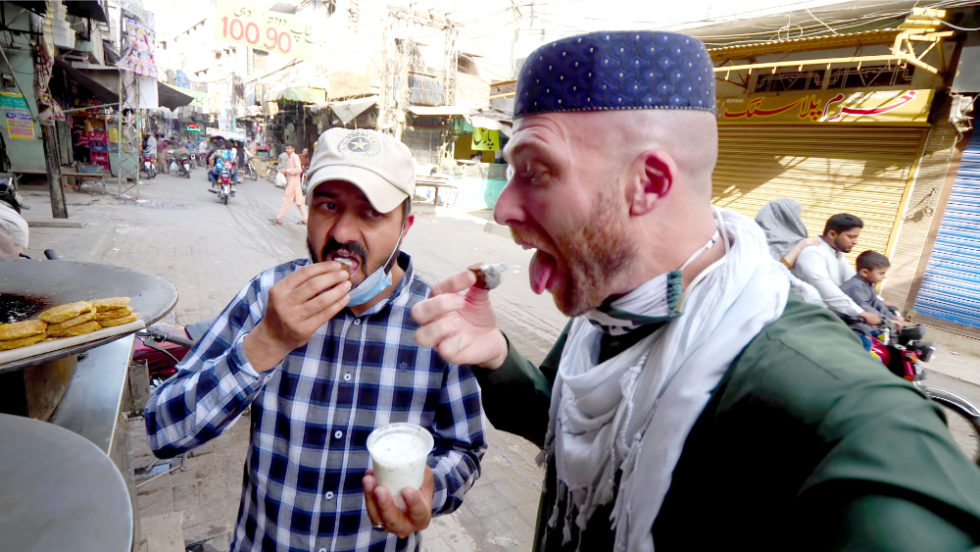 Then, we stopped at Shahbaz Tikka, where they sold a wide variety of kebabs! They had mutton kebabs, mutton seekh kebabs, chicken tikka, karahi, and sparrow! The aroma was amazing! I’d never seen sparrow before! 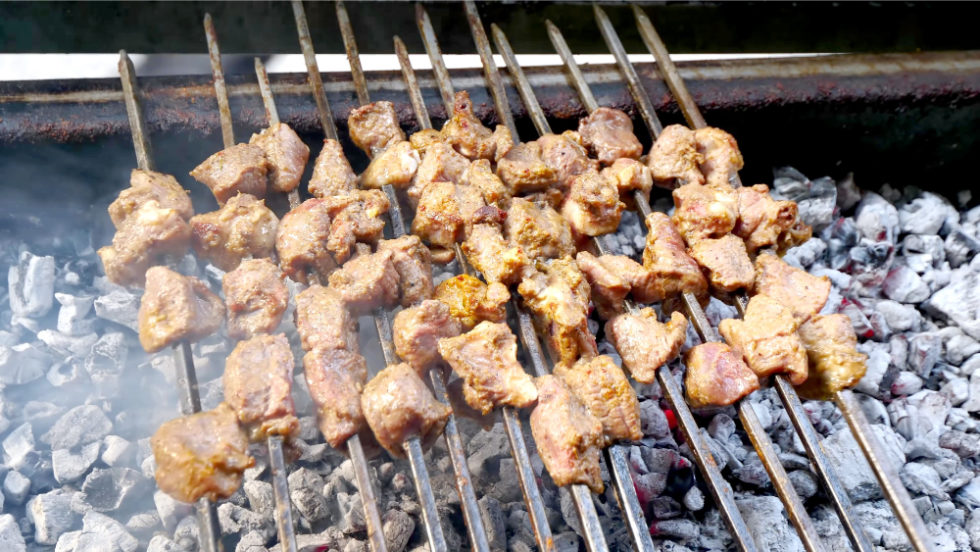 I started with the mutton kebab, which was smoky and tender and had a nice char on it. Then, I tried the sparrow, which was bony, but the texture of the meat was dense like liver or a kidney. I had to be careful of the bones, but it was very smoky and tasty! 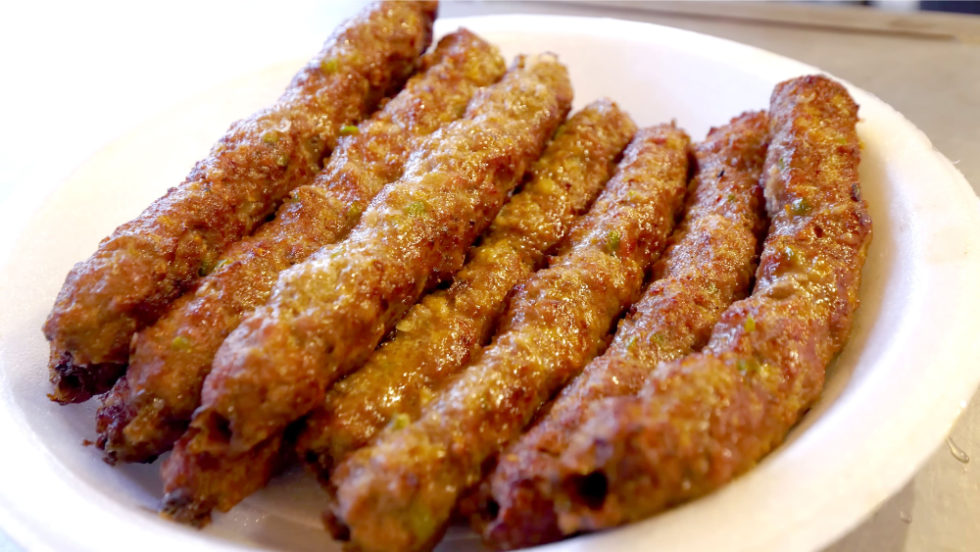 The vendors were so friendly and offered me more food and water, but I needed to limit what I ate at each place so I could continue my food tour! 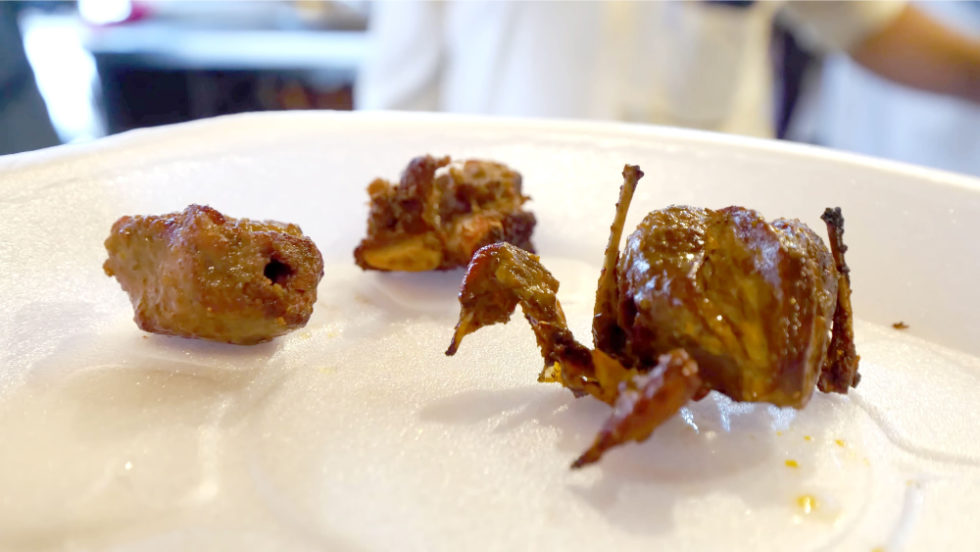 Outside, I passed a vendor butchering cow and buffalo legs and feet, which is made into a traditional dish called paya! I’d eat a lot of it in Lahore, so I continued on. There were tons of butchers along this part of the road!

Then, we exited the old town, as it was rush hour and it was getting super crowded. We drove to Khizer Tikka Shop, where they had a mountain of kebabs, goat chops, and chicken everywhere. It smelled heavenly in there! 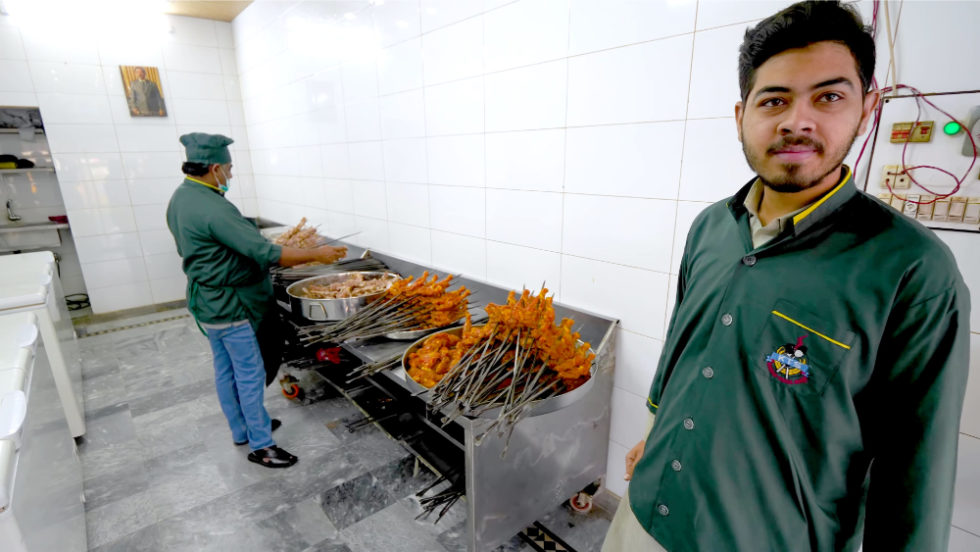 They only sell five things here: chicken tikka, mutton chops, lamb seekh kebabs, lamb fat, and quail. We were getting one skewer with everything on it! They grill them outside on a super long grill! It looked like hundreds of them cooking at once! 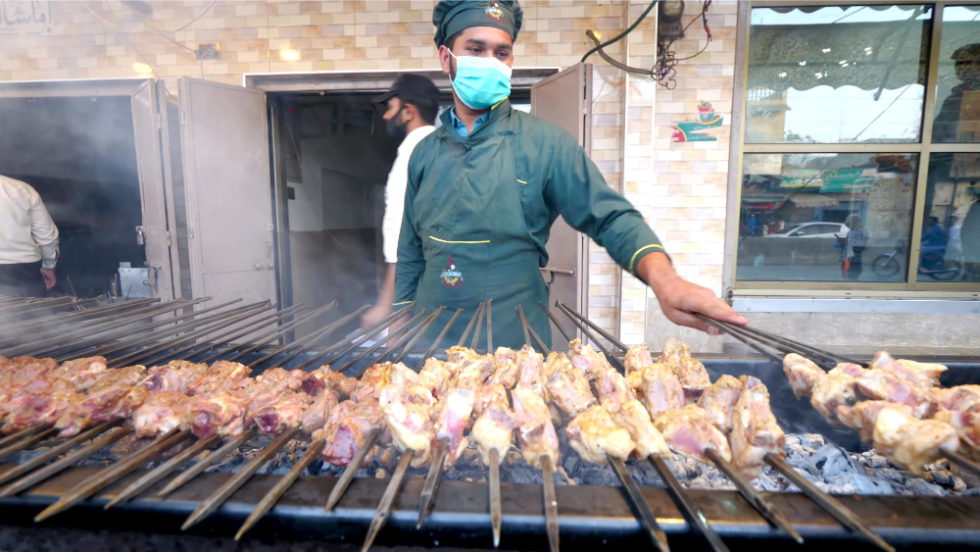 I got some garlic naan, chapati, and raita on the side. The mutton kebab was bursting with flavor and was slightly tough. Meanwhile, the mutton chops blew my mind. They’re always great in Pakistan! 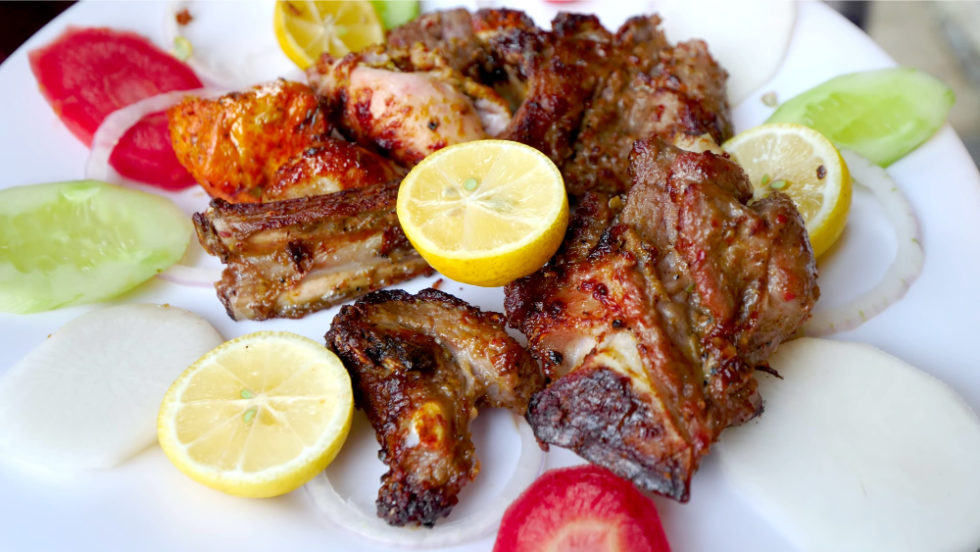 The grilled lamb fat was a mix of toughness and gelatinous fat. The chicken tikka had a really nice marinade on it, and adding some raita added a delicious creaminess. 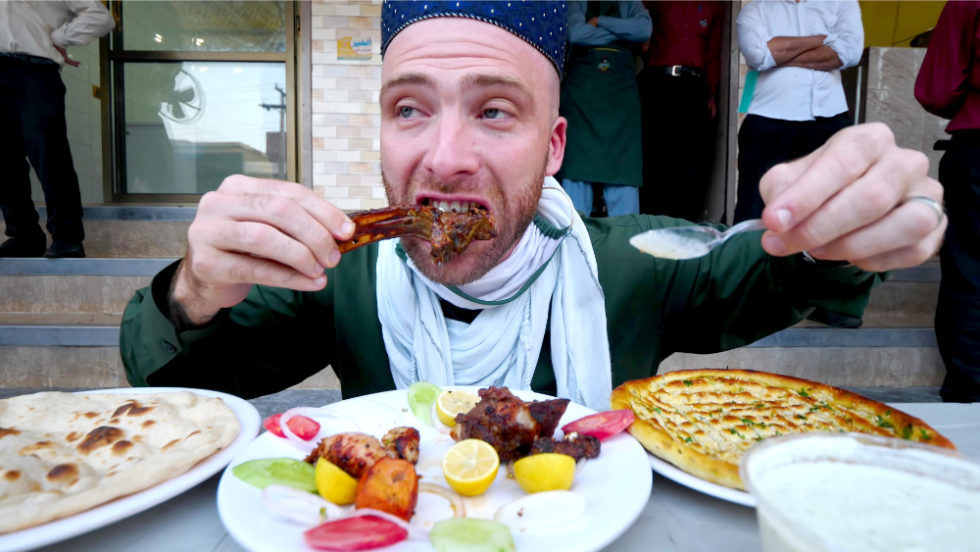 The food in Gujranwala was seriously blowing my mind. I couldn’t stop adding the raita to everything. The garlic naan was also phenomenal! I also had a smoky piece of mutton chest, which didn’t have much meat on it but I liked it! 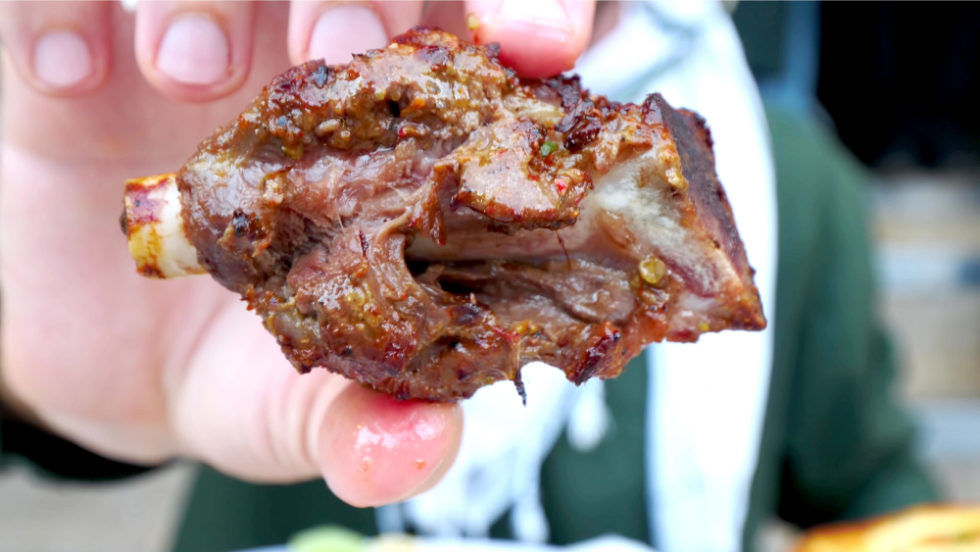 The mutton calf was the best of all of them, though! It was meaty, smoky, and charred with nice spices on it, and there was a nice amount of delicious fat on it, too!

Then, I got some mutton seekh kebabs right off the grill! They were downright heavenly! But I was so full. I couldn’t eat anymore! 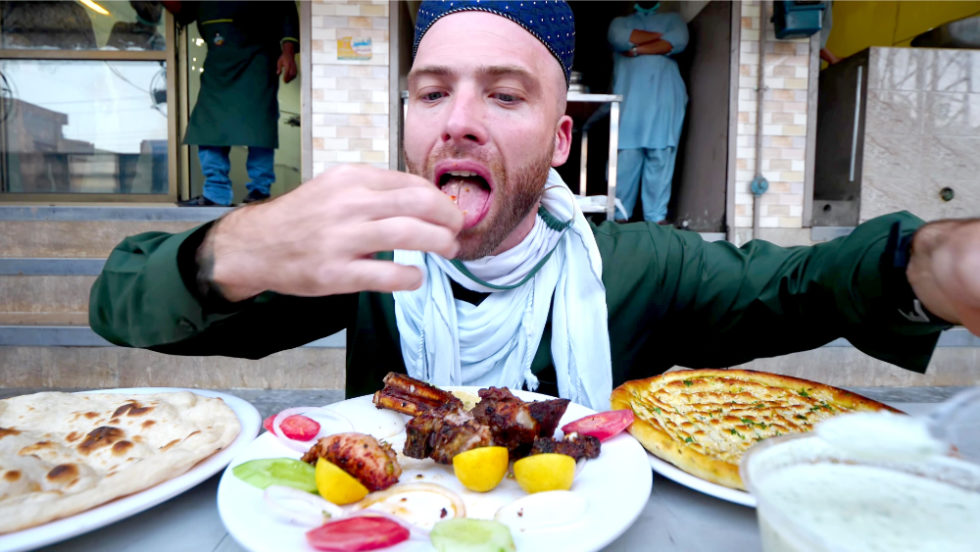 Finally, Rashid and I hopped in the car and drove back to Brandreth Gate, where we got some almond milk at Kayani Ice Cream. It was very creamy and milky! What a great way to end my extreme Pakistani meat street food tour in Gujranwala, Pakistan! 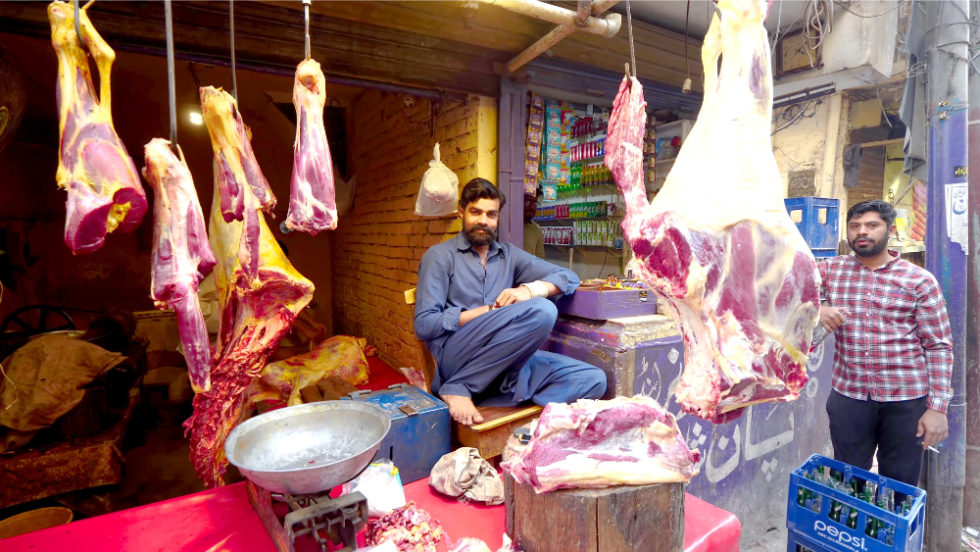 I hope you enjoyed my extreme Pakistani meat street food tour in Gujranwala, Pakistan! If you did, please give this video a thumbs up and leave a comment below. Also, please subscribe to my YouTube channel and click the notification bell so you don’t miss any of my travel/food adventures around the world!